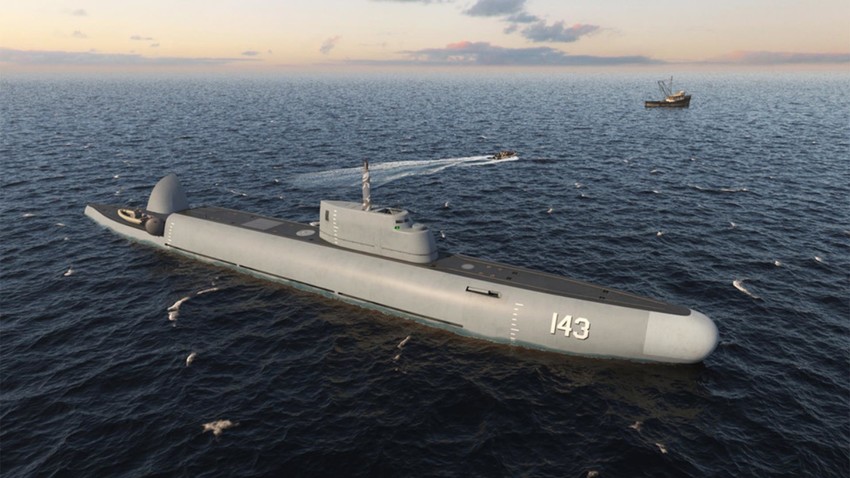 CBK Rubin
The ‘Boss’ will become the first near coastal shore patrol ship capable of diving underwater. To put it simple, it’s an inexpensive submarine for smaller countries with modest military budgets.

The Russian Federation has developed a project for a submerging patrol ship. Such a ship combines the main features and advantages of submarines and surface patrol boats. The project is meant for export and is believed to be of interest to less wealthy countries that want to upgrade their fleet.

The Sentinel aka the ‘BOSS’

In mid-April 2021, the Rubin Design Bureau revealed a new project. It provided basic information about the unusual concept, its upcoming implementation and expected results. In addition, the company showed a three-dimensional image of a patrol boat with submarine features.

The new export-oriented project was named ‘Sentinel’ in Russian, with the English-language designation chosen as ‘Border and Offshore Submersible Sentry’ or ‘BOSS’. The Russian Sentinel will most likely be promoted under the name ‘BOSS’ on the international market.

The developers of the project note that modern patrol ships are relatively cheap – and due to their low cost, they attract the attention of poorer countries. The main goal of such ships is to be able to prevent poaching and illegal fishing.

“The Sentinel project proposes the construction of a ship capable of operating on the surface or underwater. It is claimed that such a ship in a surface position will be able to conduct full-fledged patrol work, locate and detain violators. The underwater position is intended for covert surveillance of intruders, as well as for conducting reconnaissance and even for protection from adverse weather conditions,” says Viktor Murahovsky, editor-in-chief of ‘Homeland Arsenal’ magazine.

According to him, this is the first version of a submersible patrol ship. In the future, the model may be modified in accordance with foreign customers’ wishes.

The official image shows a ship with the appearance of a submarine that has some features which are not typical for the underwater vessels.

The Sentinel has an elongated hull with a flat deck, on which the superstructure-the wheelhouse of limited dimensions is placed. In the nose of the hull, the fairing of the hydroacoustic complex antenna is visible. On the sides, in front of the superstructure-conning tower, there are extendable horizontal rudders. In the stern, there is a compartment for storing motor boats that are brought to the deck.

Allegedly, the architecture and main dimensions of the ‘Sentinel’ is similar to the diesel-electric submarines designed under the old ‘Project 613’. This project was the largest in the history of the Russian Navy and was very popular among foreign customers. Depending on the configuration, the ‘BOSS’ can have a length of up to 60-70 meters and a displacement of about 1,000 tons - approximately at the level of an average 613 submarine.

The full composition of the ship’s systems and special equipment is not specified. At the same time, the principal possibility of using a wide range of systems for various purposes is mentioned. In particular, the patrol ship is capable of carrying weapons of various types. It can be equipped with a small-caliber artillery installation, a missile system or torpedoes. For reconnaissance and inspection of ships, the ship will be able to carry UAVs with several hours of autonomy and motor boats.

The Sentinel has a crew capacity of up to 42 people. This number includes both the crew themselves, who control the ship, and the inspection team responsible for working with violators.

To win a foreign tender, a design must have certain advantages over its competitors. Currently, project Sentinel can already provide a prospective buyer a basic concept. Several important advantages are planned to be obtained at once by abandoning the traditional appearance of a surface ship in favor of a combined scheme.

“While maintaining the basic features of a surface ship, the Sentinel will be able to conduct patrols, detain violators, etc. - just like other patrol ships. Due to the installation of a particular weapon, it is possible to provide the required combat capabilities that meet the requirements of surface ships. At the same time, the ability to dive will provide stealth and the ability to perform tasks at depth, as well as give other advantages,” concludes the editor-in-chief of ‘Homeland Arsenal’ magazine.

It is important that the Sentinel is not a specialized ship, but a multi-purpose marine platform. The composition of its equipment and weapons should be determined by the customer, taking into account its needs. Accordingly, within the Sentinel family, both simple patrol ships with minimal equipment and well-armed “hunters” capable of destroying surface and underwater targets. Such flexibility in the use of the platform can be a serious competitive advantage.