What Russia’s most powerful assault rifle is capable of 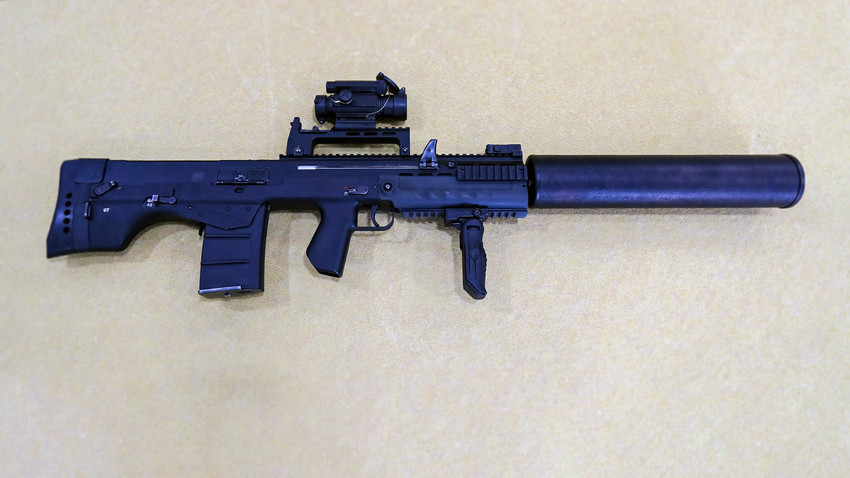 Vitaly Belousov/Sputnik
This weapon can penetrate solid walls and even the slightest hit of its ammo can be lethal. Our correspondent went to a shooting range to fire one himself.

Back in 2001, Russian FSB forces ordered a new assault rifle that would be able to effectively penetrate solid walls, as well as the toughest body armor plates. The need for such a new weapon was revealed after the terrorist attack on a school in Beslan, where more than 1,100 people were held hostage (including 777 children).

In order to fulfil the needs of the Spec Ops units, Russian engineers created a weapon that was chambered with the most powerful assault rifle ammo in the world -  12.7х55 mm rounds.

Engineers created a bullpup assault rifle called Ash-12, which was meant to drastically surpass the AK-74’s capabilities in close combat.

“The main issue during its creation was to make a rifle capable of penetrating walls and eliminating terrorists, no matter where the bullet hits them. Ash-12’s rounds are scary to even look at. If you compare the ammo from an Ash-12 and the AK-74, the latter one would look like a pin,” says Ivan Alekseev, a former Spec Ops officer.

He explains that the two rifles were created for different reasons and operations. The AK-74 was meant to effectively work in the harshest weather conditions and eliminate targets up to 300 meters away in open spaces.

“Its bullets have a high velocity and good penetration qualities. Yet, they are lighter and not bulky enough to go through solid obstacles. The Ash-12 is more powerful on short distances. It has heavy and bulky bullets that can go through [certain] walls, but, at the same time, lose ballistics on long distances,” says the expert.

According to him, the Ash-12 isn’t well suited for hitting targets 150 meters away.

As for firepower, its 12.7х55 mm ammo is one of the deadliest on the market.

“The weapon has enormous stopping power and targets go down no matter where you hit them. A really scary weapon to see in your opponents’ hands,” he admits.

Alekseev says the weapon was well received back in the day and is mainly used for counter-terrorist operations in the Caucasus region nowadays.

I personally got the chance to test the Ash-12 at a shooting range in the Moscow suburbs in early September 2021.

The weapon turned out to be pretty big and enormously heavy for an assault rifle (nearly 6 kg with an attached silencer). It felt uncomfortable to work with it standing up, so I opted to lay down and shoot targets this way.

At the same time, the ammo of the rifle leaves you with zero questions - it’s unbelievably powerful. One shot of the heavy 12.7х55 mm rounds can literally explode bricks and the weapon’s recoil leaves bruises on your shoulder from the hard kickbacks.

Modern versions of the Ash-12 have rails on top for optics and on the bottom for flashlights or grenade launchers. The weapon has a kit with two easily detachable silencers - a big one that can be compared to Ash-12’s size and a smaller one. Surprisingly, the bigger silencer balances the weapon’s weight and makes it easier to aim at targets at a distance.

The Ash-12 looks edgy and mechanically simpler compared to its direct American analogues that are based on the AR-15 platform and chambered with .450 Bushmast or .50 Beowulf ammo. Besides that, Americans mostly use these platforms for hunting, while the Russian rifle was created to be used by operatives and withstand roughest battle and weather conditions (click here to find out how Russia tests its weapons prior to their adoption to the military).

After the shooting test at the range, I understood a couple of things for myself. The Ash-12 is, without a doubt, a very situational weapon, due to a number of reasons - weight, size and enormous firepower. The weapon isn’t suited for skirmishes in open spaces, as a mobile unit with further reaching rifles will outmatch you. At the same time, the Ash-12 is literally able to cut a door through a wall, so it’s a great addition for units that have to “smoke out” targets from a fortified position.