Science & Tech
Nikolai Litovkin
Russia has made $1.3 billion in deals at the show and intends to steal the biggest deal of the century on the delivery of fifth-generation fighter jets from its competitors.

Russia presented a huge number of new civil and military aircraft, as well as unmanned aerial vehicles, at the Dubai Airshow 2021.

It resulted in the interest of the UAE government in the new Russian fifth-generation fighter ‘Checkmate’ and a number of signed contracts with foreign customers worth $1.3 billion and bids for future deliveries that will bring it more than $2.5 billion once signed.

We took a look at the three main headliners of the Russian expo at the Dubai Airshow 2021, as noted by the Roctec corporation and media. 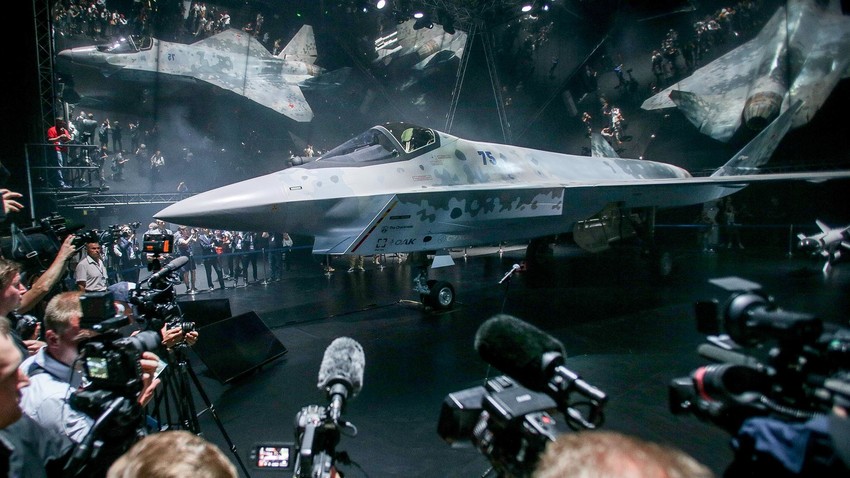 Without a doubt, Russia’s biggest premier of the show was its new single-engine fifth-generation fighter jet ‘Checkmate’. It’s worth noting that the plane isn’t operational yet and was specially delivered to Dubai by one of the largest aircraft in the world, the An-124 ‘Ruslan’.

As Yuri Slyusar, general director of the manufacturing company UAC (part of Rostec corporation), is quoted by media as saying, the aircraft represents a unique combination of combat characteristics and cost of operation. Its development was based on the data obtained during operations in Syrian.

As he notes, the price tag of a brand new single-engined ‘Checkmate’ will be between $30-35 million, which is nearly two times less compared to its all modern analogues around the world.

“The aircraft is distinguished by its broad striking and reconnaissance capabilities: it can simultaneously attack up to six targets, has the latest set of onboard avionics equipment with artificial intelligence and reduced radar visibility,” says the expert.

It’s already been revealed that each single-engine aircraft will have a speed of 2,100 km/h and a combat flying time of 3,000 km.

According to the jet’s creators, ‘Checkmate’s production is scheduled to begin in 2025. The aircraft is expected to join Latin America, Africa, the Middle East and Southeast Asia militaries. 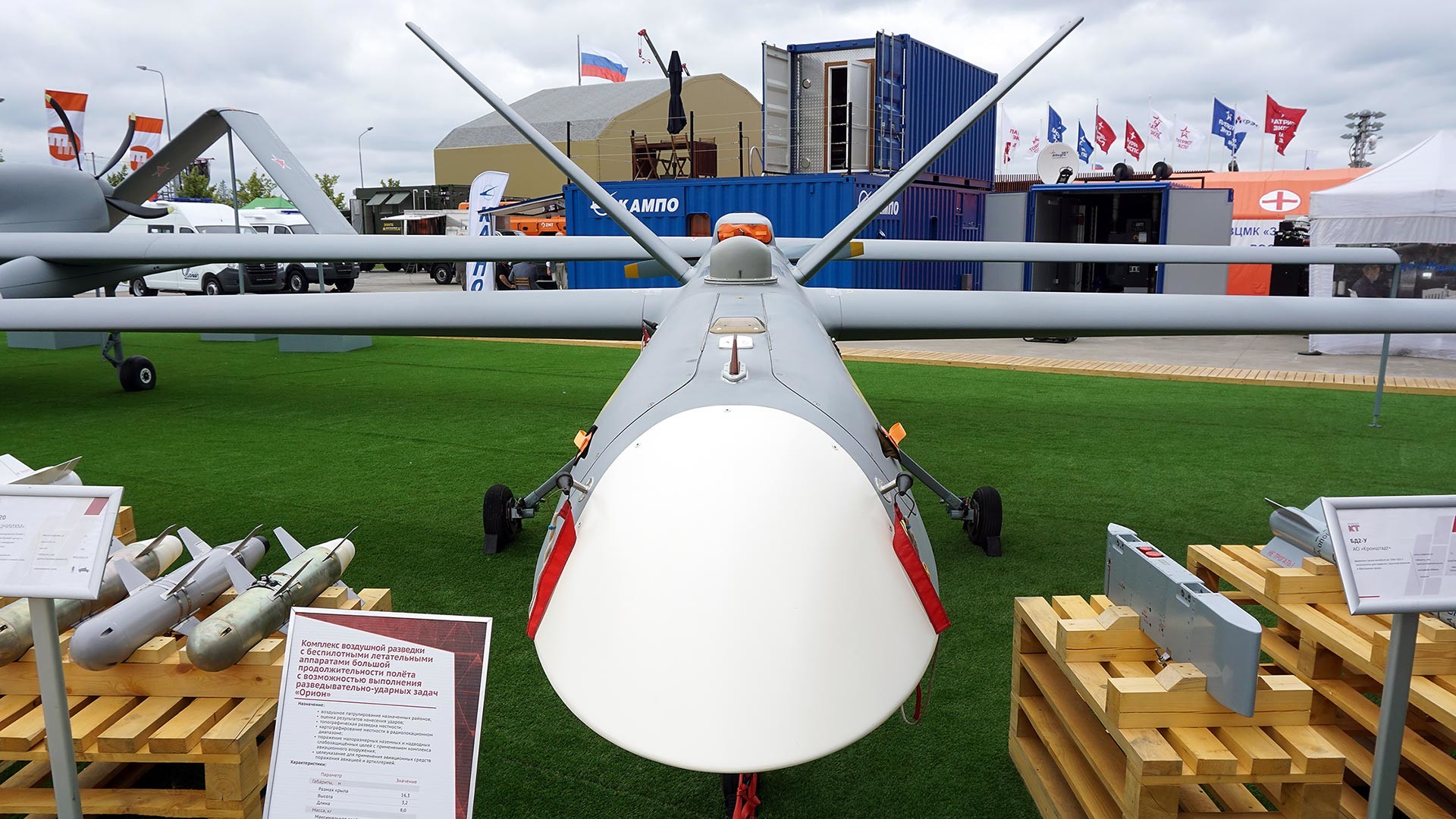 Another Russian headliner at the exhibition is the ‘Orion’ strike drone from the Kronshdtad corporation.

“This unmanned aerial vehicle became a workhorse during the Syrian campaign. Its appearance in the army allowed it to reduce operational costs of the Air Forces operating in the region and test a number of prospective technologies on battlefields,” says Safonov.

According to him, the vehicle can turn from being a single operated drone with guided and unguided bombs on board to a hub that can operate a swarm of UAVs.

“The company is developing ‘Orion’ further and is testing its capabilities to work as a hub with artificial intelligence for smaller drones. The goal is to make it an independent unit that would control a strike force of 20 UAVs on the battlefield,” explains the expert.

‘Orion’s main feature, he states, is its capability to control drones through satellite signals and not in a form of radio frequencies that could be “silenced” by means of radio electronic warfare. 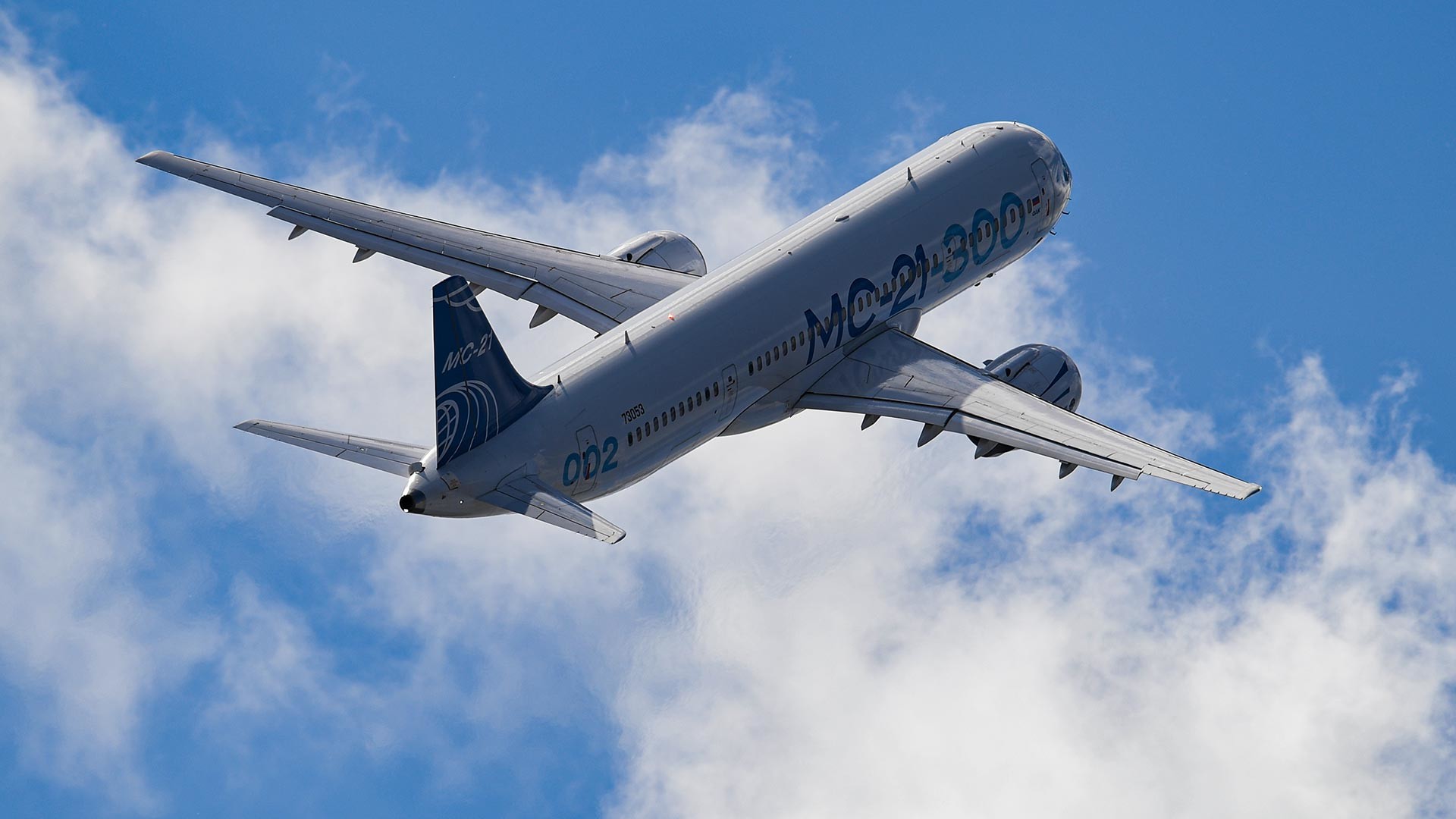 According to Boeing’s estimates, in the coming decades, the demand for civilian air transportation is expected to grow rapidly. Airlines around the world will require almost 20 thousand aircraft of various types and the total value of contracts in this direction is estimated in the region of $3.2 trillion.

In order to fulfil the needs of airlines and passengers, Russia recently unveiled a 163 passenger aircraft with a max flying range of 6,400 kilometers - the MC-21.

The airplane was not only displayed at the exhibition, but also showed its capabilities during the flight demonstration. The media praised its capability to to gain altitude up to 800 m and maintain an angle of 45° at a speed of 210 km/h.

To be honest, MC-21 looks pretty impressive in real life. I personally saw a demonstration of a MC-21 at the MAKS-2019 airshow when the plane took a sudden drastic angle after gaining speed on the runway and then surged into the sky. The stunt almost looked like a fighter jet take-off.

The plane showed great acceleration and maneuverability. The pilot was landing a huge passenger plane in terrifying angles, almost demonstrating what only the ‘Russian Knights’ would be capable of. By the way, click here to find out everything about this aerobatic team that became a worldwide sensation in the early 1990s.

Besides flight characteristics, producers name the MC-21’s cabin as one of its main features. The plane has the widest passage between seats in its class, making it one of the most comfortable in the medium-range airliner segment.