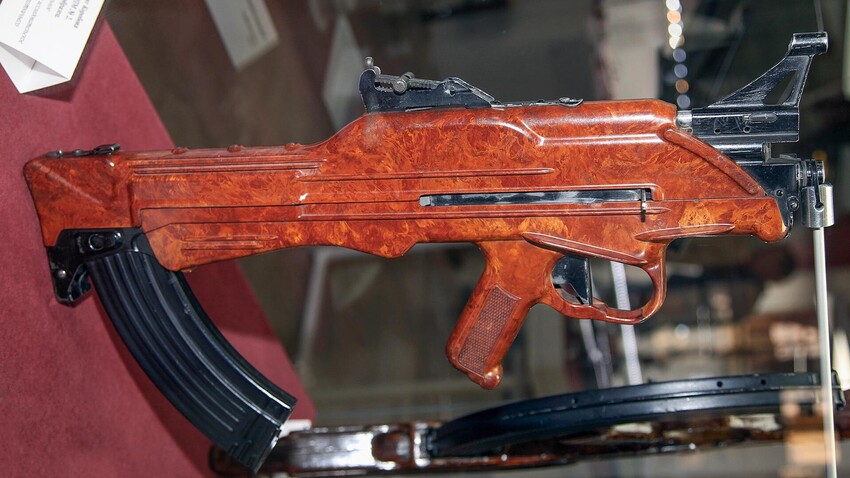 Vitaly V. Kuzmin/vitalykuzmin.net
The TKB-022 ‘Korobov’ is a rare Soviet weapon that American bloggers dream of testing at a shooting range.

This is the first Soviet assault rifle that was created to outmatch AK-47 with a number of characteristics, although it didn’t happen.

In December 2021, we will upload our own range tests with this weapon to our YouTube channel, but before that, we want to tell you everything about the gun that could have surpassed the mighty AK and become the main weapon of the Soviet army.

Few people know that after World War II, Russian engineers presented for military trials a weird looking assault rifle with a magazine placed inside of a grip.

This was the first testing weapon dubbed ‘TKB-022’, where a magazine was used as a handle, in order to reduce the overall dimension of the weapon. Without a doubt it decreased the overall weight and length of an assault rifle chambered with powerful 7.62x29 mm ammo, but made a candidate on becoming a Soviet soldiers’ assault rifle very uncomfortable to use.

It was no surprise that such a weapon lost military trials to the new, powerful AK-47 assault rifle.

In 15 years, Korobov would present a totally redesigned TKB-022 with a magazine placed inside of the stock. This type of assault rifle was called bull-pub and was very popular among European weapon designers in the middle of the 20th century.

“This technical solution allowed Korobov to further reduce its weapon’s dimension and made it more accurate compared to the AK-47. It was a pretty good weapon with pretty no recoil (which is a significant issue for a 7.62x29-mm assault rifle), but the TKB-022 had a serious setback that was unacceptable for realities of wars of the 20th century - low reliability,” says Maksim Pepenker, a weapon historian and author of books about assault rifles.

According to him, the TKB-022 failed resilience tests such as shooting without lubrication, shooting from “frozen” weapons, shooting from hot weapons, dipping into swamp mud and shooting bp “contaminated” weapons. You can read up on how such tests are conducted nowadays here.

“This was the first time when a Soviet engineer showed a weapon technically better than the Kalashnikov assault rifle. But it was inferior in the characteristics of a mass-market army assault rifle,” notes Pepenker.

The TKB-022 is considered a technically complex and an unusual weapon. Engineers called its parts “steel origami” with finely worked mechanics that were extremely difficult to implement in production.

Such “refinement” of the weapon was possible only for ideal operating conditions. As a result, the TKB-022 wasn’t adopted in the USSR, but its analogs found their place in NATO’s special forces.

What makes the bullpup different and which units use it

The bullpup construction allows constructors to increase the length of the barrel by 20-30 centimeters. To put it simply, the combat characteristics of the weapon grow exponentially and, at the same time, a user gets a light and accurate weapon that can be comfortably handled in narrow spaces.

“Since the USSR needed weapons for the regular army, the TKB-022 lost military trials to the AK and is now kept in the arsenal of the Tula Arms Factory. At the same time, similar versions of the weapon have been used in the Austrian armed forces since the 70s,” the expert says.

The main analogue of the TKB-022 is the Austrian ‘Steyr’ AUG. This weapon is widely used by NATO’s police and is well known to gamers, thanks to the game Counter Strike.

“The AUG is as sensitive a weapon as the TKB-022. It is ideal for the city, but no unit takes it on an operation in rural areas. The weapon is made of polymers and is filled with contamination-sensitive mechanisms that make it very accurate and effective, but also capricious,” notes Pepenker.

The TKB-022 went down in history as the first Soviet bullpup that was more accurate and ergonomic than the Kalashnikov assault rifle.

Nowadays, some of its technology and solutions are integrated into the SHAK-12 large-caliber assault rifle, which is used by the FSB special operations units. You can find out all about this weapon here.