Travel
William Brumfield
Historian and architecture expert William Brumfield takes a closer look at the Church of the Intercession on the Nerl, a 12th-century Russian Orthodox church and a symbol of medieval Russia. 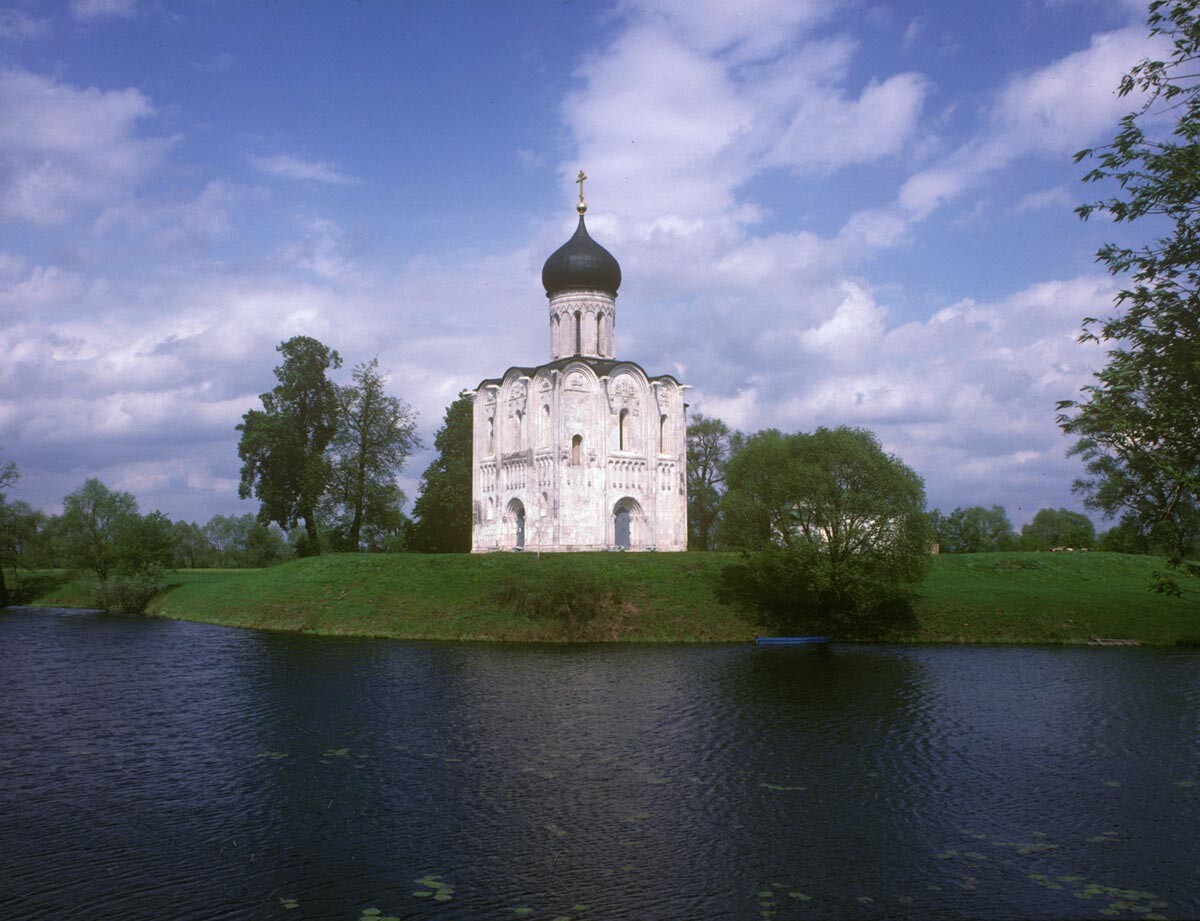 Bogolyubovo. Church of the Intercession on the Nerl, southwest view. May 16, 1995

At the beginning of the 20th century, Russian chemist and photographer Sergey Prokudin-Gorsky developed a complex process for vivid, detailed color photography. His vision of photography as a form of education and enlightenment was demonstrated with special clarity through his photographs of medieval architecture in historic settlements northeast of Moscow, such as Vladimir, which he visited in the summer of 1911. My personal visits occurred over a period of decades from 1972 to 2009. 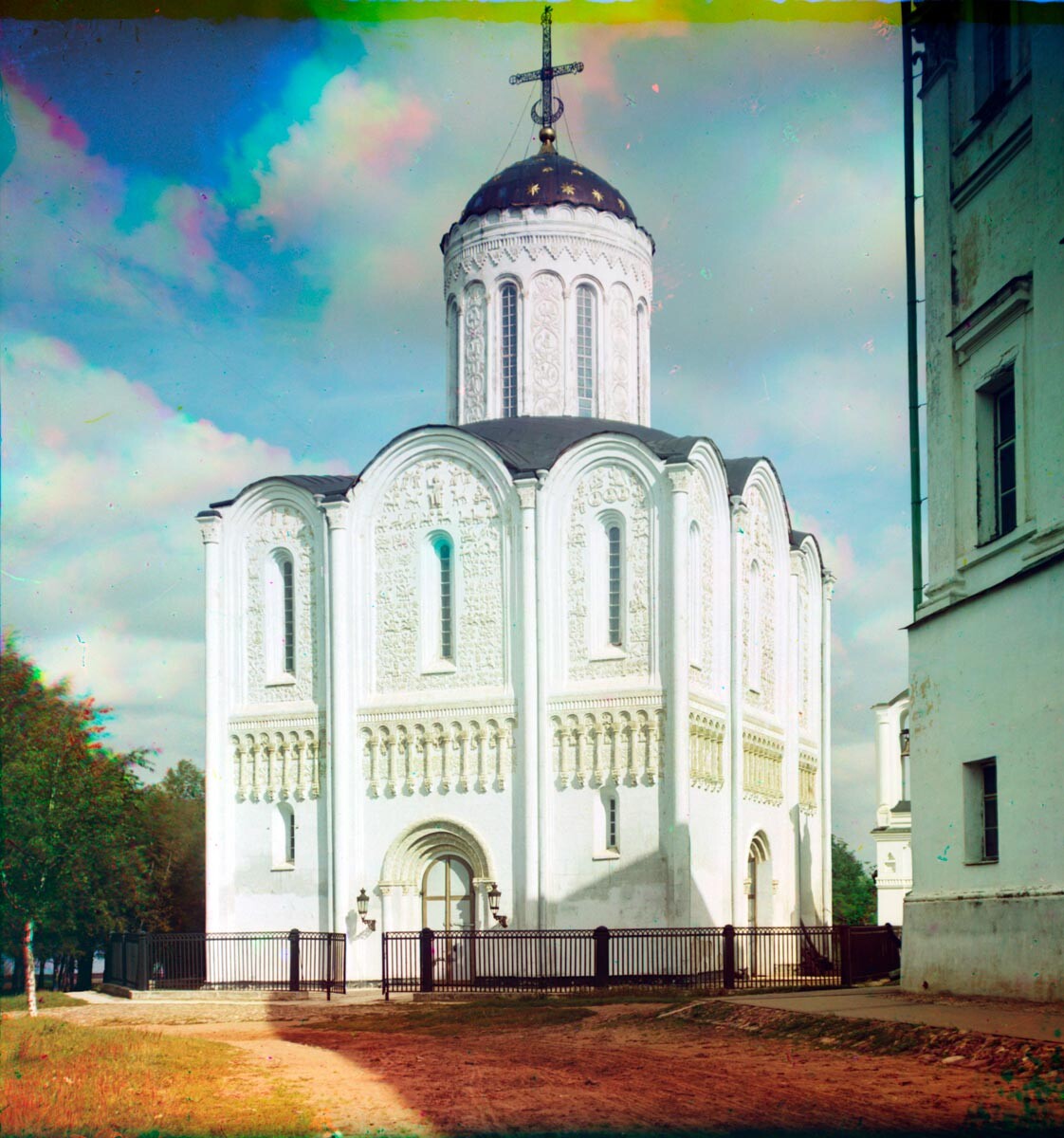 One of the defining moments in Russian history was the decision, at the turn of the 12th century, to accelerate the development of the fertile northeastern territory of Kievan Rus’, as the medieval lands of the eastern Slavs were known then. The fortress of Vladimir was established in 1108 on the Klyazma River by Vladimir II Monomakh (1053-1125), who ruled as Grand Prince in Kiev from 1113 to 1125. In 1046, his father, Vsevolod I, married a relative of Byzantine Emperor Constantine IX Monomachus and Vladimir was, thus, able to adopt a prestigious sobriquet. 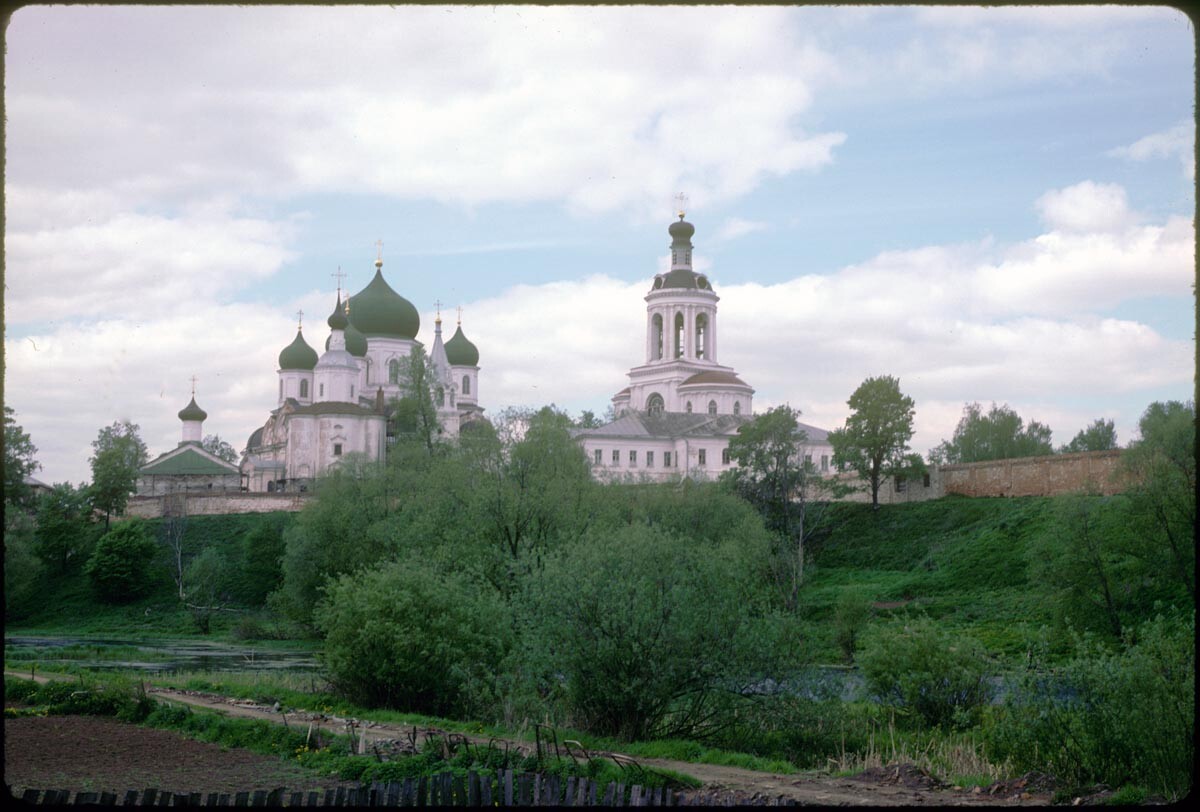 Vladimir Monomakh’s reign is considered one of the most productive in the history of Kievan Rus’ and with his guidance the area around Vladimir became a political and economic center in the lands of the eastern Slavs. An indication of the richness of this culture has survived in monumental churches erected in the area by Monomakh’s descendants in the second half of the 12th century.

Although the primary building material during this period was wood, Vladimir and its surrounding settlements witnessed a surge of church construction in the form of limestone known as white stone. A notable example is the cathedral dedicated to St. Demetrius of Thessaloniki. 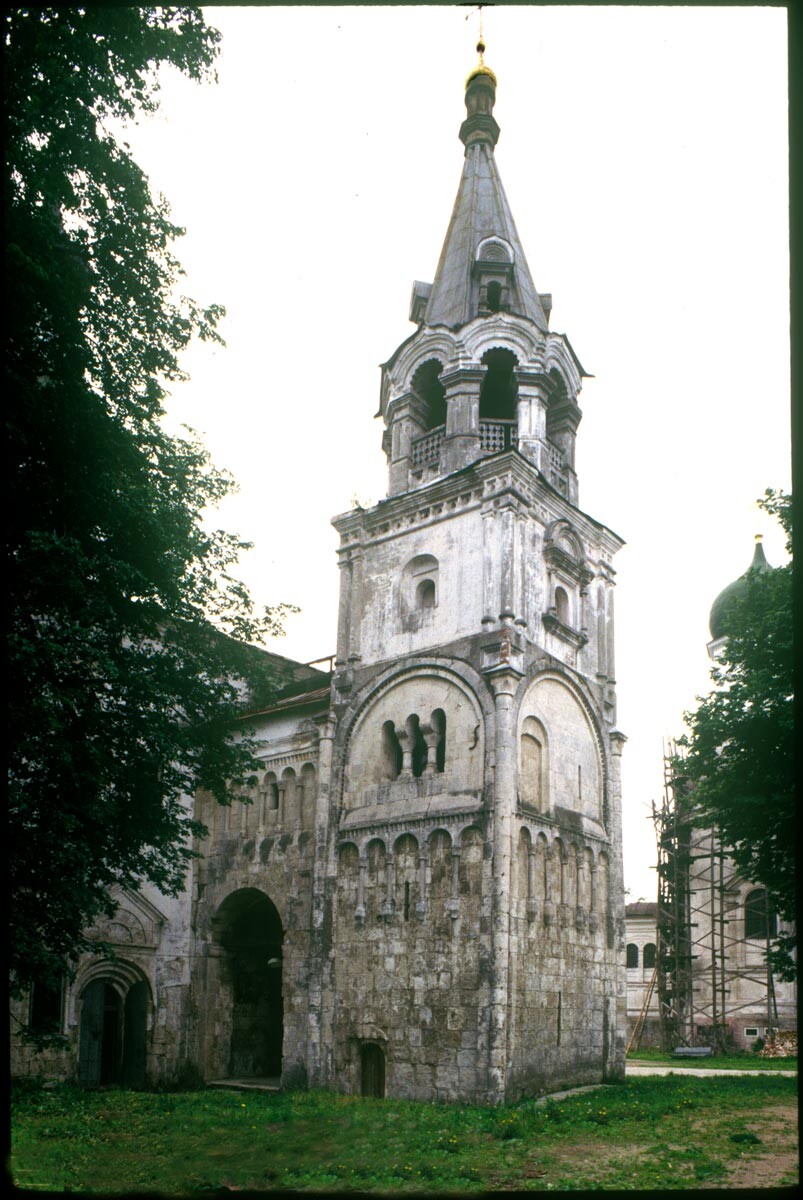 Built between 1194 and 1197, the St. Demetrius Cathedral has elaborately carved façades and was part of a palace ensemble created by Vsevolod (III) Yurevich, grandson of Monomakh and ruler of the Vladimir principality from 1174 to 1212. Prokudin-Gorsky took several photographs of this masterpiece in the summer of 1911. 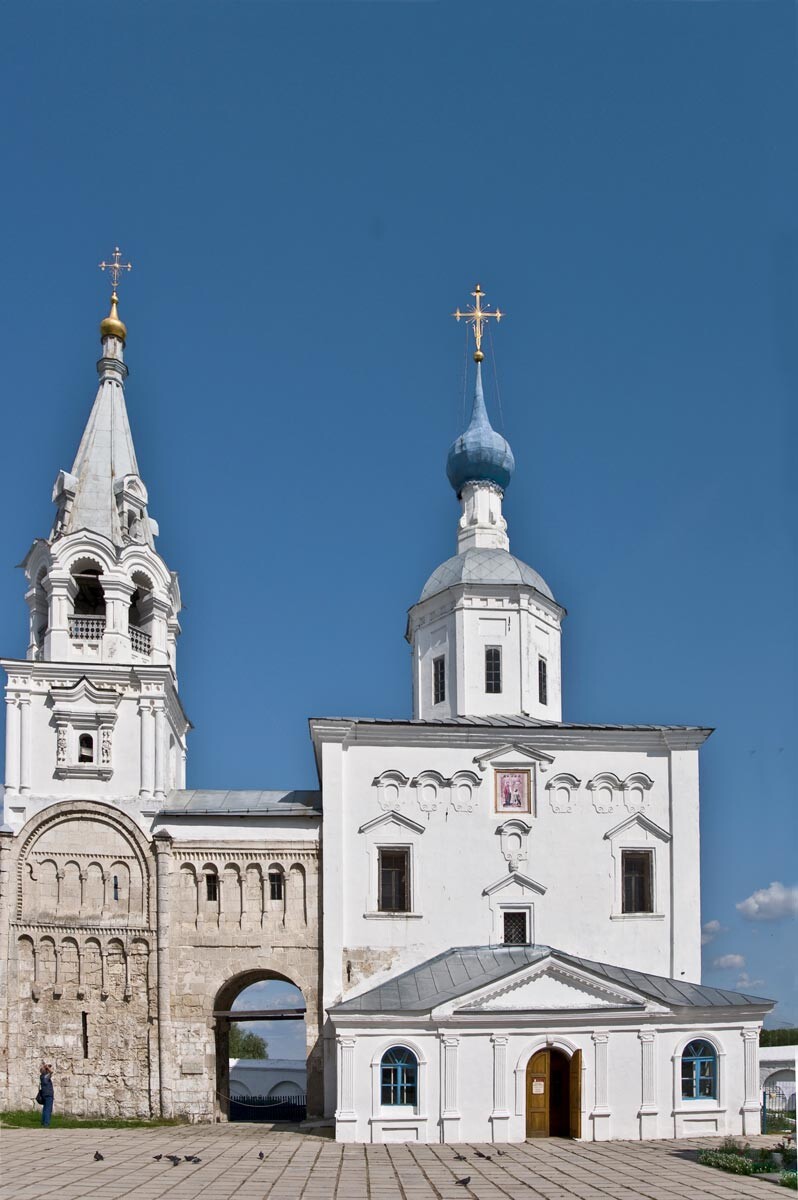 The first major builder of the churches in the Vladimir area was the tempestuous Andrey Bogolyubsky, half brother of Vsevolod III and son of Yury Dolgoruky (1099-1157), who is considered the founder of Moscow. After the death of Yury Dolgoruky in 1157, Andrey decided to make Vladimir - not Kiev - his capital and ruled there as Grand Prince of the Vladimir-Suzdal lands from 1157 to 1174.

Among his several construction projects was a residence at Bogolyubovo, established in 1158 just northeast of Vladimir, near the confluence of the Nerl River with the Klyazma River, part of the Volga River basin. According to legend, the name ‘Bogolyubovo’ (bogolyuby, or “God beloved”) arose from an episode connected to one of the most deeply revered Russian icons, known as the “Vladimir Mother of God” or “Virgin of Vladimir”. Brought to Kiev from Constantinople around 1130 as a gift to Prince Mstislav, the holy image was placed in a church at the princely residence of Vyshgorod. 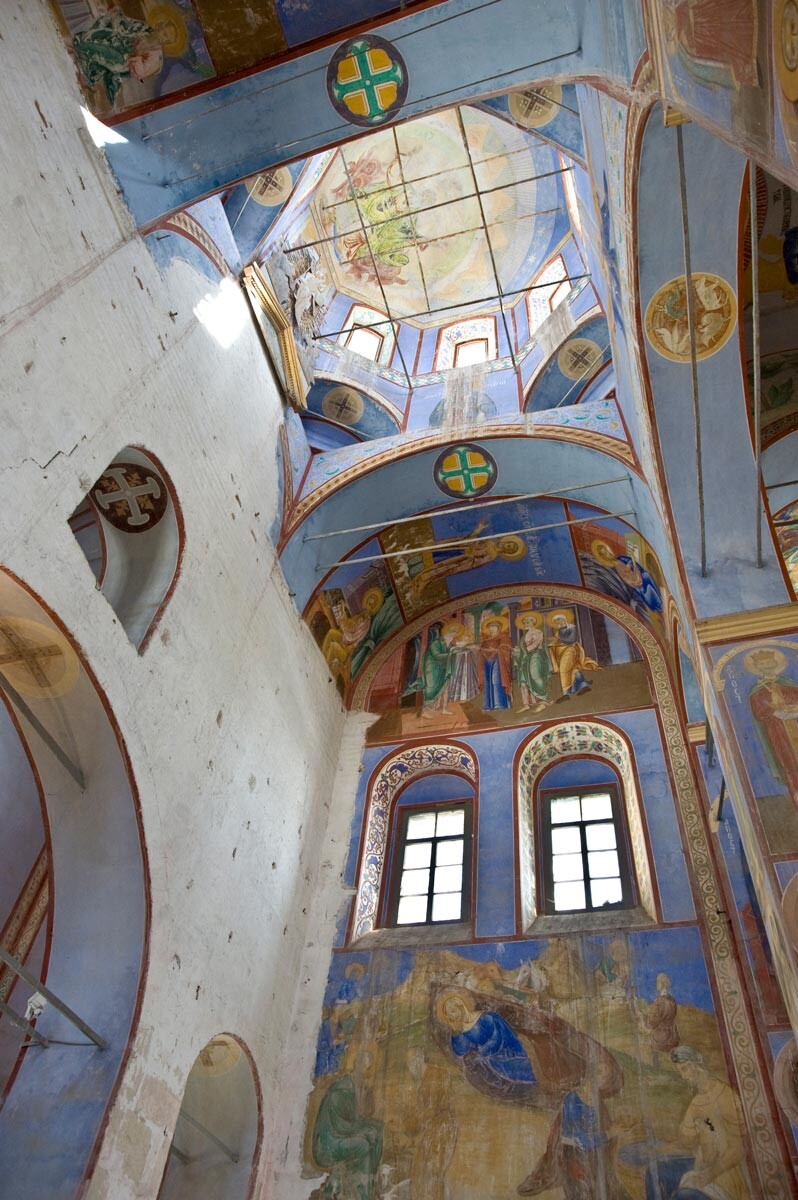 As a young prince in 1155, Andrey took the valuable icon from Vyshgorod to enhance his projected new power center in Vladimir. Legend has it that during the transport of the icon, the horses pulling the cart stopped at the site near Vladimir and refused to move further. That night, Andrey had a vision of the sacred image of the Virgin Mary.

On this “God-beloved” (Bogolyubovo) site, between 1158 and 1165, builders erected an ensemble that church dedicated to the Nativity of the Virgin, as well as an adjoining white stone palace - a rarity in medieval Russia. Although the palace itself has long disappeared, it is survived by a passage that connected it to the northwest corner of the church and by a stone stair tower, where Andrey died of wounds inflicted by conspirators in the summer of 1174. 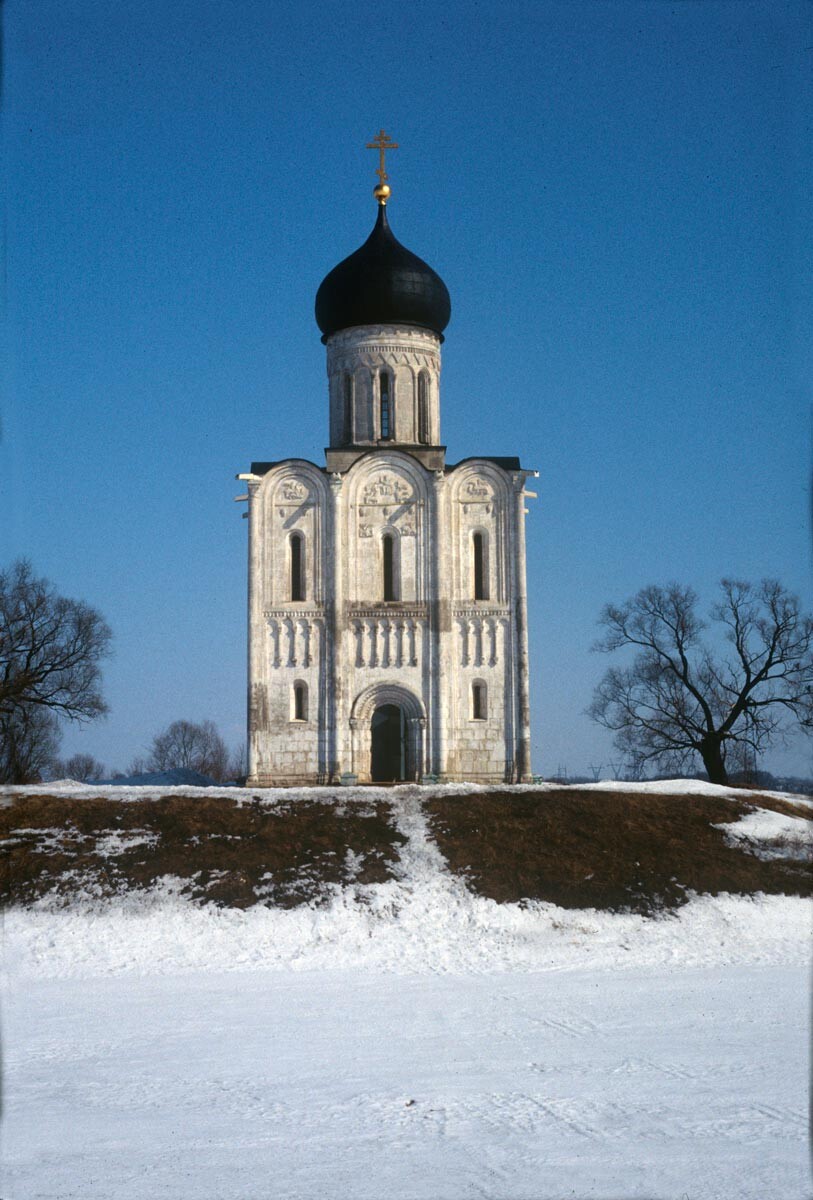 Bogolyubovo. Church of the Intercession on the Nerl, west view. March 29, 1994

Raided by Prince Gleb of Ryazan in 1177, Bogolyubovo was devastated in February 1238 and its fortifications razed during the cataclysmic Mongol invasion. Although precise information is sparse, a monastery was founded on the site perhaps as early as the 13th century and included the ancient church, but the remains of the palace fell into decrepitude.

A symbol of divine protection 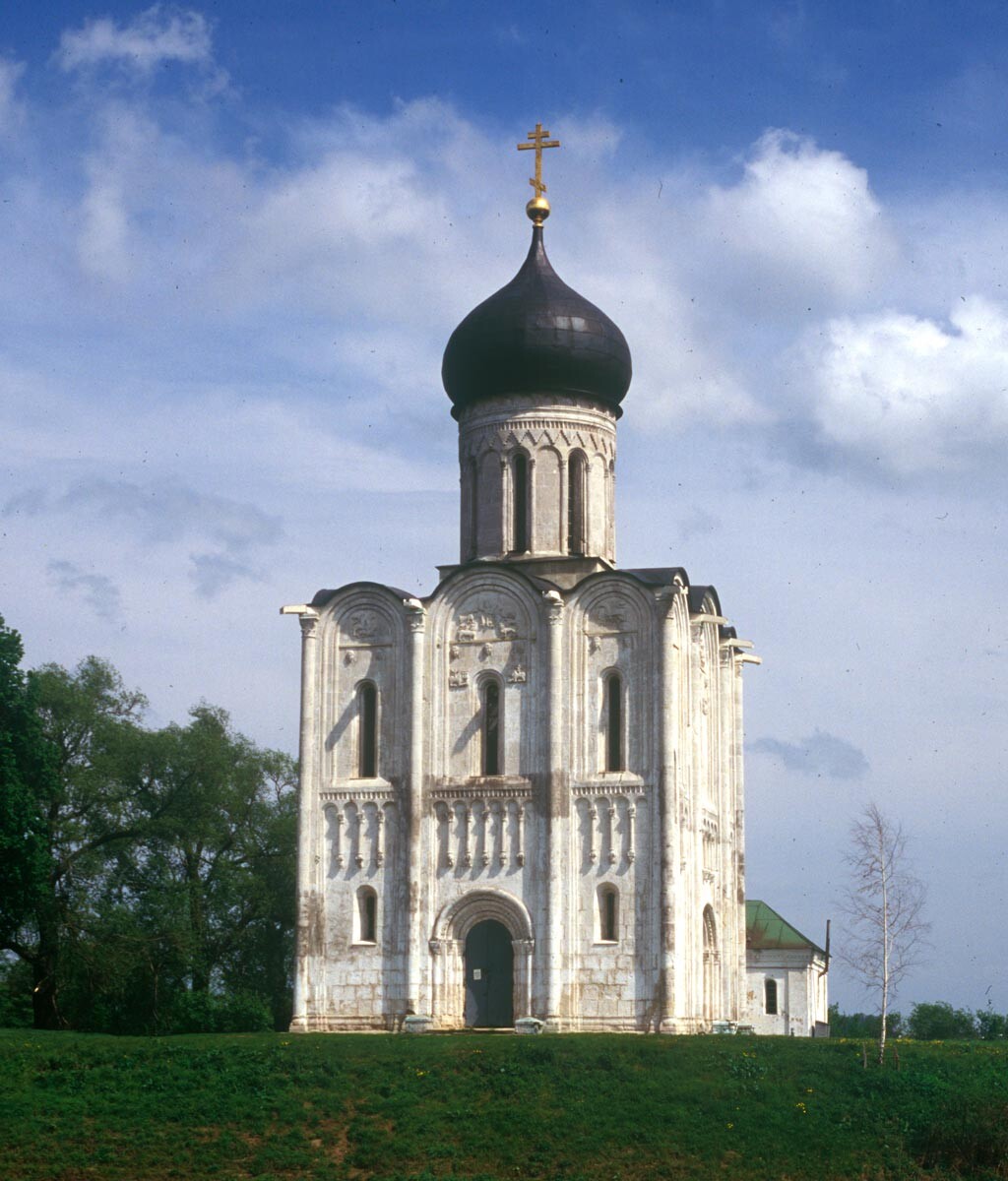 Paradoxically, Andrey’s elevation to sainthood in 1702 hastened the destruction of his Bogolyubovo ensemble, particularly in the 18th century, which witnessed a major expansion of the monastery. The greatest loss was the collapse in 1723 of the Cathedral of the Nativity of the Virgin as the result of an inept attempt to enlarge its windows. A rebuilding of the church preserved some of the original fragments, which can still be seen (both on the facades and on the interior) in the revived monastic ensemble. 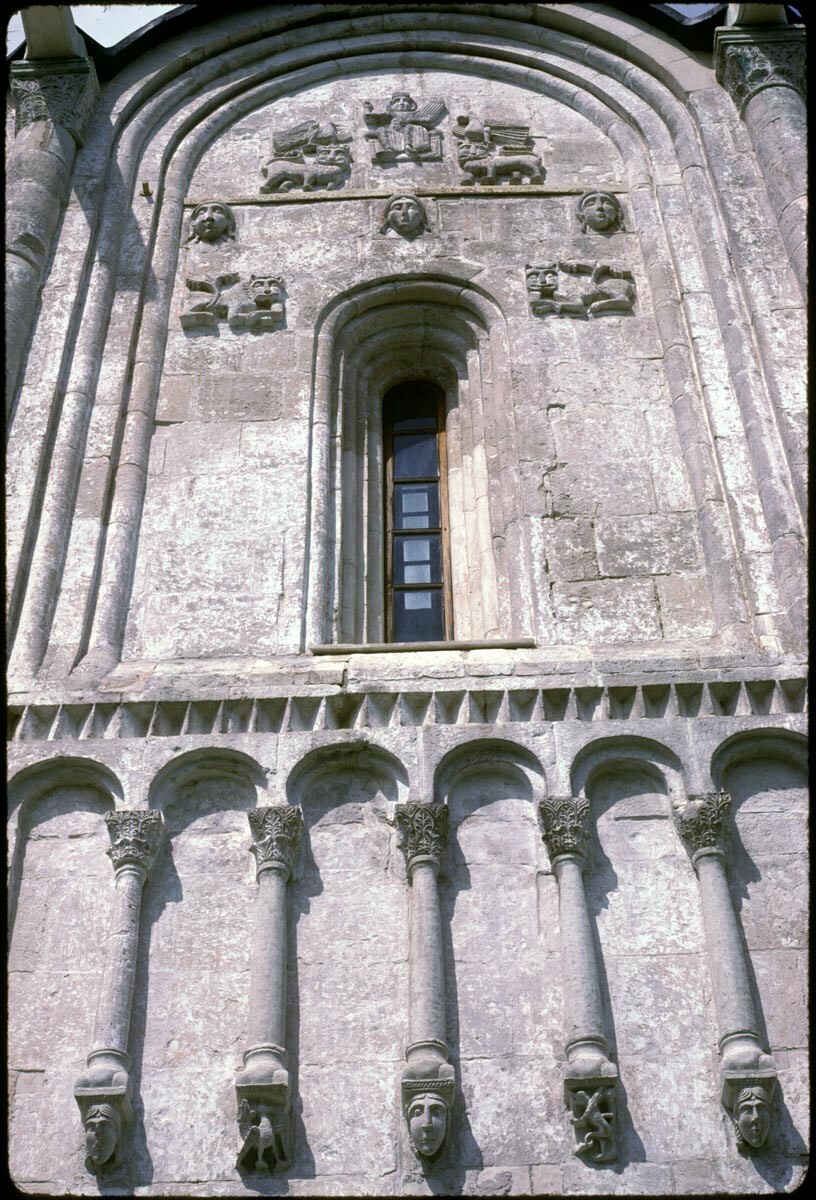 Church of the Intercession on the Nerl. West facade, center bay with arcade frieze. May 16, 1995

The one structure at Bogolyubovo that has survived in something like its original form is the lyrically beautiful Church of the Intercession of the Virgin on the Nerl, located within walking distance of the monastery. Built in 1166 to commemorate Andrei’s victory over the Volga Bulgars, the church is dedicated to a miraculous vision of the Virgin in early 10th-century Byzantium. Andrey endowed the miracle with major significance as a symbol of divine protection (The miracle is celebrated at the beginning of October in the church calendar). 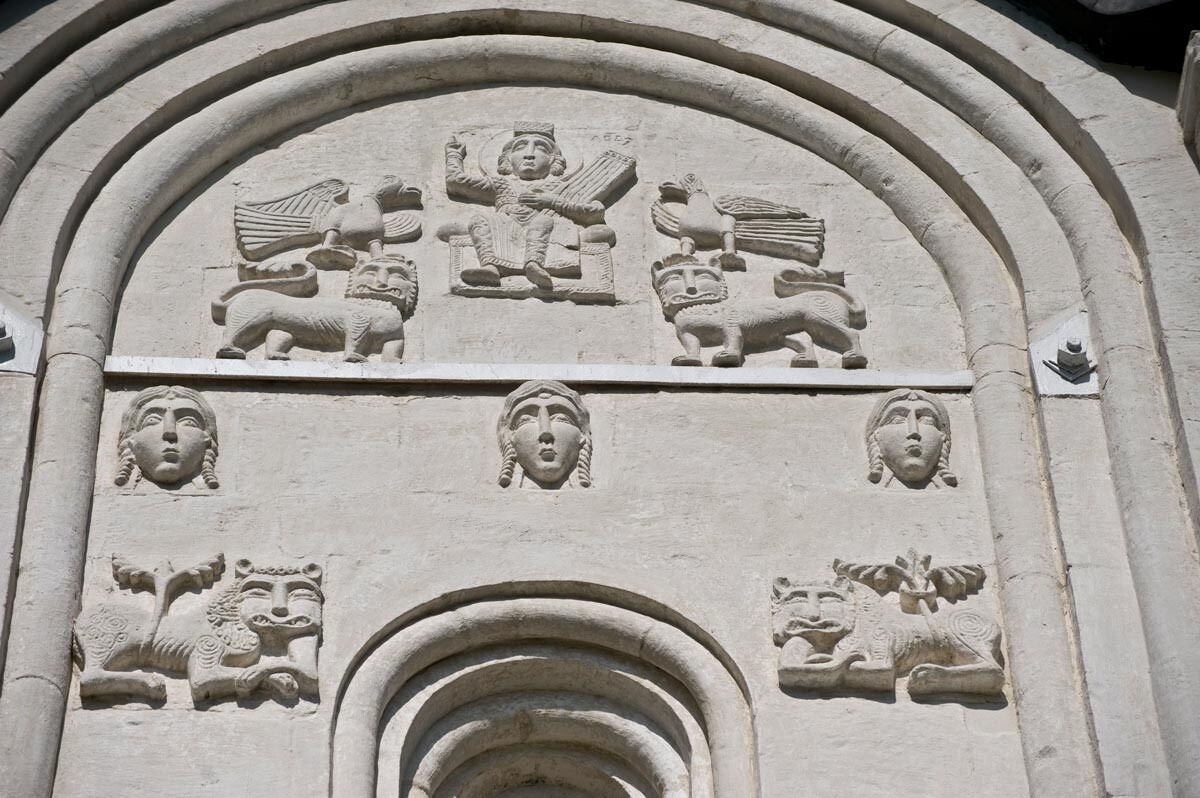 The 12th-century builders took an unlikely site, exposed to spring floods near the confluence of the Kliazma and Nerl Rivers and turned it to advantage by creating an artificial hill paved with stone that not only protected the church from high water and provided a buttress for the deep foundation walls (five meters), but also served as a pedestal for the church itself, reflected in the River Nerl. 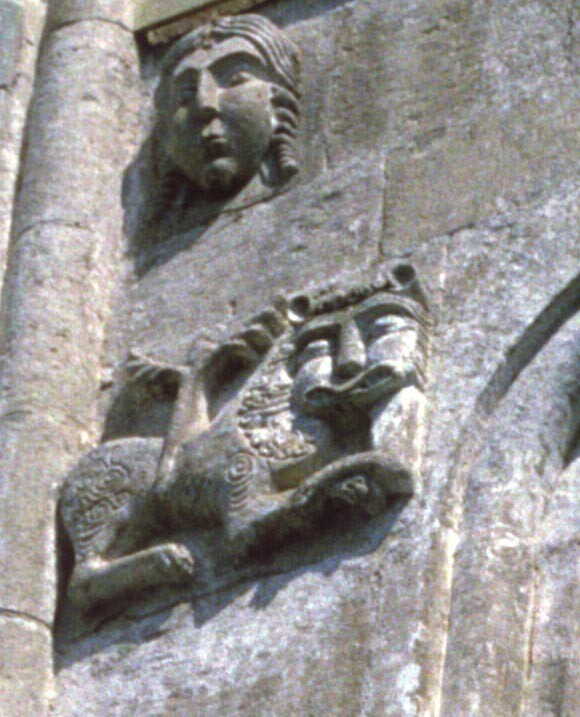 Church of the Intercession on the Nerl. West facade, center bay with lion & female mask. May 16, 1995

The Intercession Church appears to have been buttressed by a gallery (subsequently dismantled), but the proportions of the core structure are unusually precise and refined. The structure rises in two tiers: a lower story of thick walls culminating in an arcade frieze and an upper story of facades deeply recessed within the three bays of each wall. The vertical emphasis is reinforced by the receding surface of the walls and by a slight calculated lean inward, which creates a foreshortened effect. The original dome, supported on a tall cylinder, or “drum”, would have been in a low hemispheric shape. 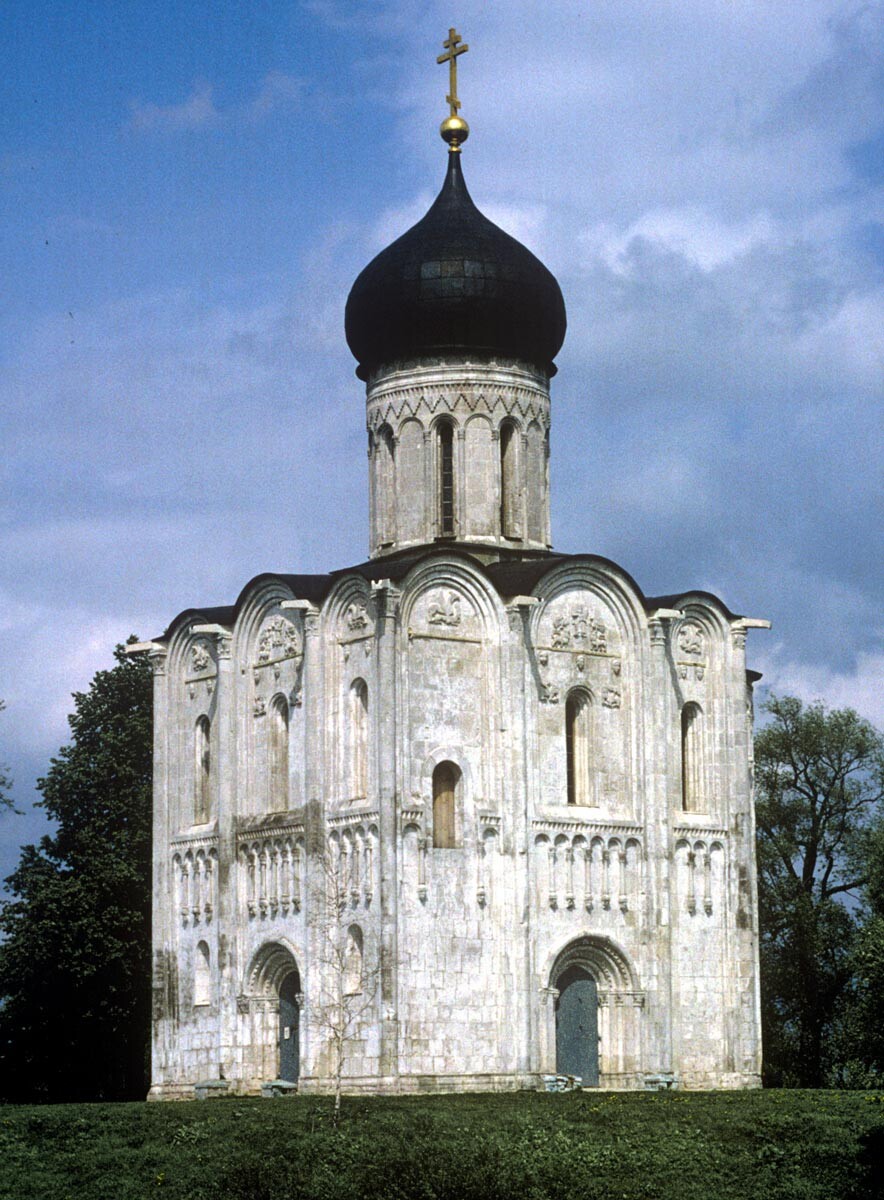 Church of the Intercession on the Nerl, southwest view. May 16, 1995

The Church of the Intercession is the area’s earliest surviving monument to display an iconographic message in stone. The white limestone quarried in the area provided a durable material suitable for carving and the rapid development of this form of exterior ornamentation at Andrei’s Bogolyubovo churches and the appearance of perspective portals with carved arches suggests the participation of foreign masters familiar with the Romanesque style in central Europe. 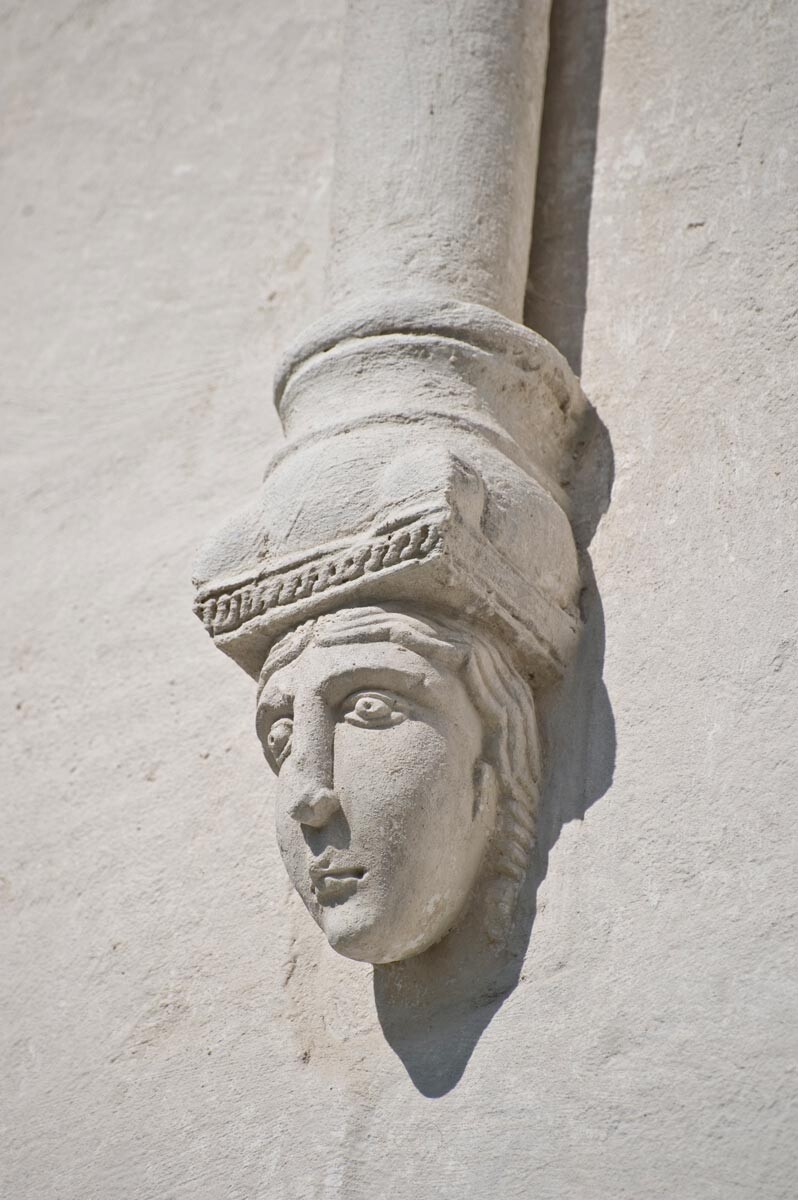 The carved façade elements include bestial and human figures. The dominant element in the latter group is the iconic carving of King David, placed at the top of the central bay of each façade. Enthroned, with the right hand raised in blessing and the left holding the Psalter, David is flanked by two birds and two lions, signifying both submission and protection. 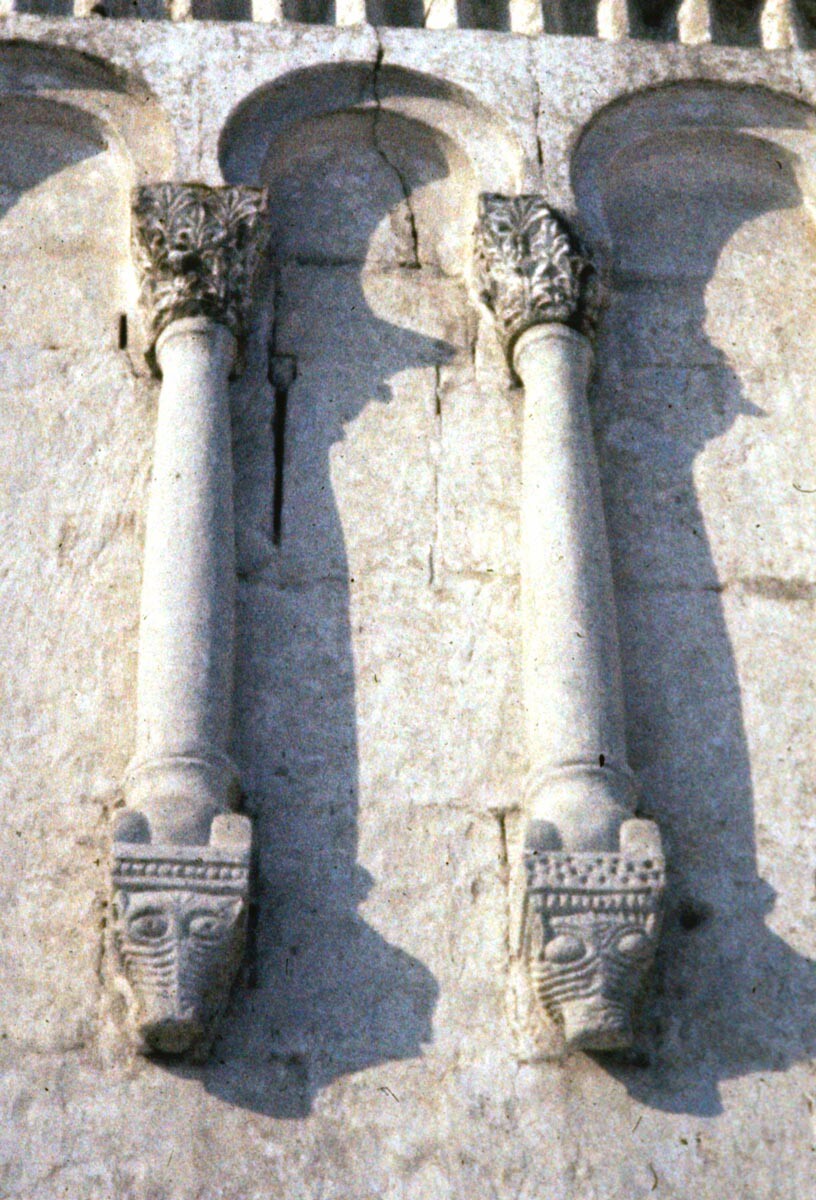 Church of the Intercession on the Nerl. South facade, right bay arcade frieze with columns supported by console blocks with carvings of fanciful beasts. March 6, 1972

The prominence allotted David suggests various interpretations: as God’s anointed, the king of Judah, he represents the warrior-leader who defeated his enemies and united the various factions within his kingdom - deeds Andrey would have compared to his own frequent campaigns to consolidate power within Rus’ and to defeat such external enemies as the Volga Bulgars.

Although written sources refer to Andrei as a “second Solomon”, it is probable that Andrei intended himself to be compared to King David, a strong ruler and victorious warrior. In endeavoring to unite the Russian lands around a new center of power in the northeast, Andrei had clearly been aware of the symbolic uses of architecture, especially in this church, which testifies to the power of divine intercession invoked in the Psalms. 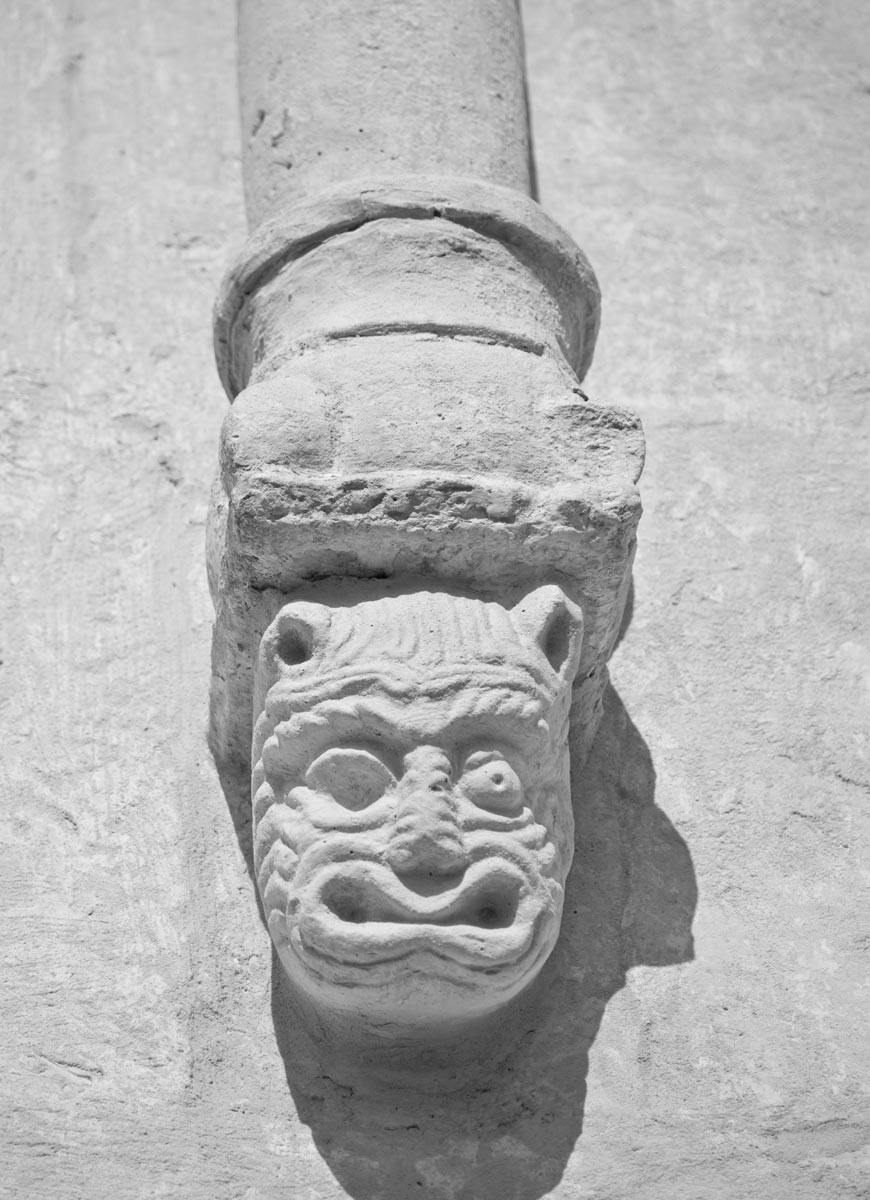 Church of the Intercession on the Nerl. West facade, arcade frieze column supported by console block with sculpted head of fanciful beast. July 18, 2009

More precisely, the name of the church honors the intercession of the Virgin, whose protection is extended to the people of Vladimir and their God-fearing ruler. Although no representation of Mary appears on the Church of the Intercession, the concept of her intercession is expressed in the twenty high-relief masks of braided maidens, placed slightly below the curved gables (zakomary). Striking in their stylized primitive form, the masks suggest not only the exaltation of the feminine in Orthodox religious art, but also the indigenous celebration of fertility and the reverence for the Russian earth as a female being. 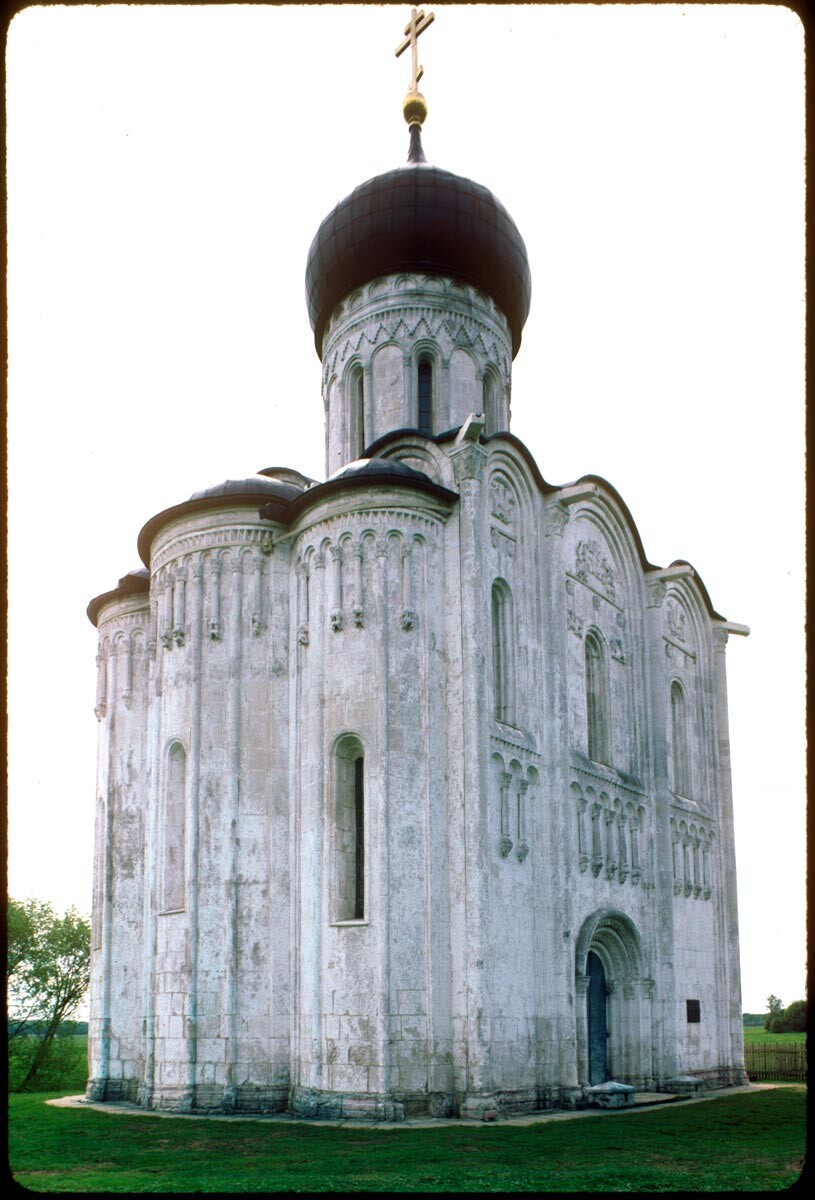 Church of the Intercession on the Nerl, northeast view. May 26, 1997

A variety of forms proliferated on the consoles supporting the columns of the arcade frieze, such as female masks, lion faces, leopards, pig snouts, griffins and other chimeras. These figures were presumably drawn from the Physiologus, a work that had considerable impact on architectural sculpture and manuscript art throughout medieval Europe and one of the secular texts imported to Rus’ from Byzantium. The appeal of the Physiologus derived from its blending of popular tales of nature with an allegorical, Christian interpretation of often fantastic beasts.

Virtually nothing has survived of the original interior art. Although the walls would have been covered with frescoes, they have vanished through centuries of neglect and harsh conditions. Only the sublime proportions of cut limestone walls have remained. 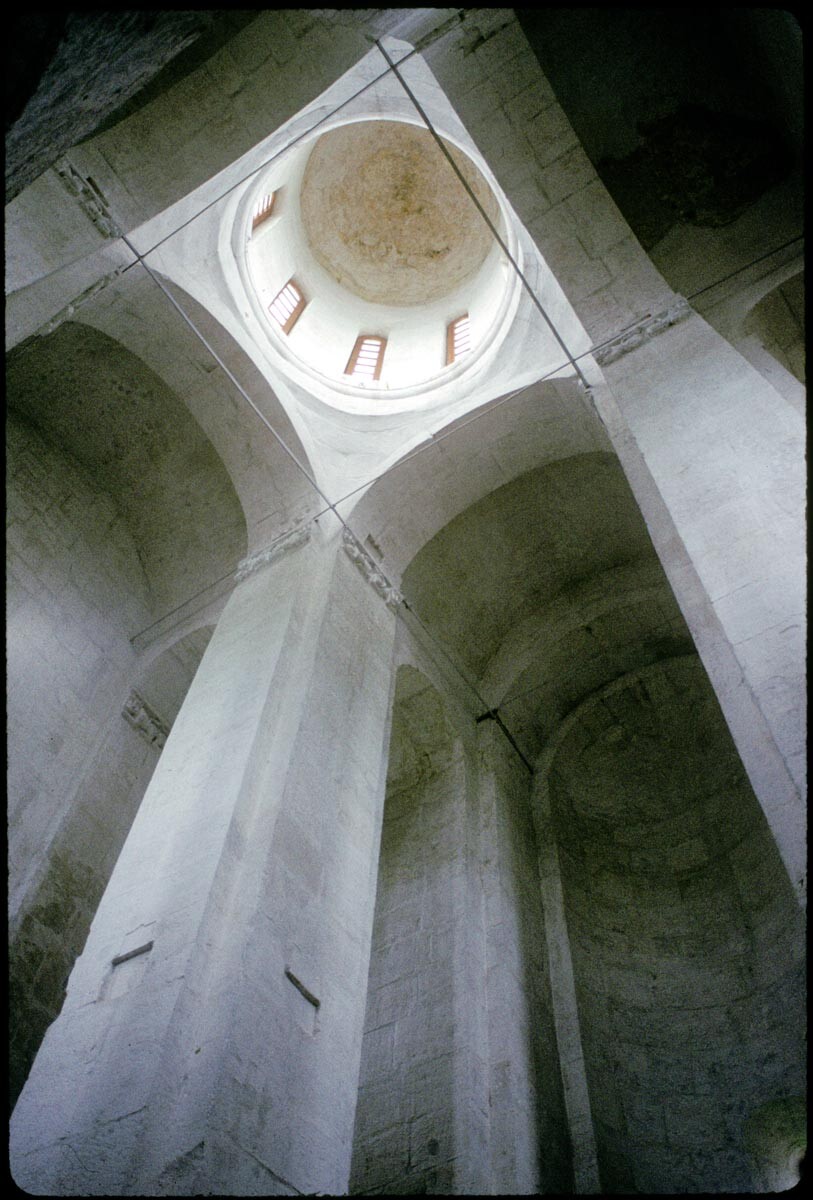 Church of the Intercession on the Nerl, interior. View northeast with dome. June 19, 1994

It is a miracle that the church has survived at all, particularly since it could have been demolished for building material in the 18th century. The onion dome is a nineteenth-century distortion and the current roofline obscures the base of the cupola drum, as well as its relation to the curved gables, yet the builders’ original design is still clearly in view.

Essential conservation work was undertaken in 1979-81 and, in the early 1990s, the Church of the Intercession was reconsecrated for active use. As the church became a pilgrimage site, modifications were introduced surrounding the site. I was fortunate to photograph the shrine when it still stood in pristine grace. 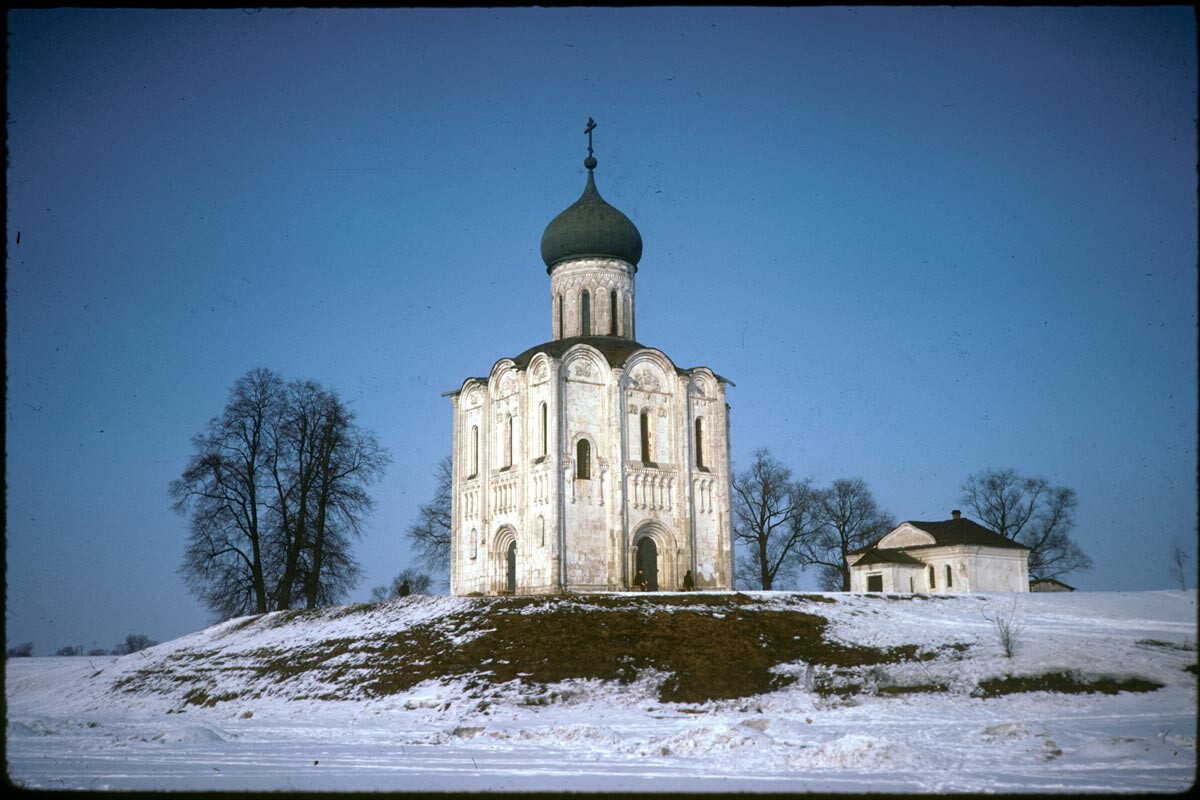 Church of the Intercession on the Nerl, southwest view. March 6, 1972