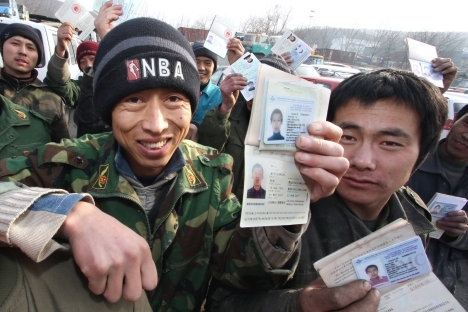 President Vladimir Putin has introduced amendments to the migration legislature which have hit the headlines: For the first time, it has been proposed that those who act in violation of the migration legislation be brought to full criminal liability. The law was named "On the Right of Russian Citizens to Freedom of Movement, the Choice of a Place to Stay and Residence within the Russian Federation."

Although it is labeled as “internal to the Russian Federation,” the corrections will also apply to foreign citizens living in Russia. However, if the law is violated, it will not be foreign citizens who end up in jail. According to Putin’s proposals, punishments will instead be meted out to Russian home-owners who open their property to illegal or unregistered migrants.

The amendments will bring about several concrete changes to the registration process. Every Russian or highly-qualified foreign specialist who changes their place of residence will be obliged to register within 90 days, and a foreign citizen without qualifications will have to register within seven days of their arrival.

Furthermore, in instances where migration legislation is seen to have been grossly violated, the property owner could be brought to criminal responsibility and end up behind bars for up to three years. According to the bill’s authors, the latter proposal will mainly concern the owners of what Russians call “elastic flats,” where 20-40 people are registered at any one time.

In other words, punishments will be meted out to those supporting the black market in registration and those who make it possible for people to register somewhere they do not actually live.

As noted in the explanatory notes attached to the amendments, the new rules are primarily geared toward “cracking down on property owners’ mass abuse of their rights to register citizens.” Russia’s migration service supports these changes but is not confident they can be implemented in full.

Head of the Federal Migration Service, Konstantin Romadanovsky, told Kommersantnewspaper that he has been waiting for this bill for a long time, but, “if it turns out to be even 50 percent effective, this will be cause for celebration.” According to him, the registration system currently in place does not make it possible to fully control the situation and, consequently, it is difficult to bring those who violate it to justice.

Many of the solutions proposed in the amendments are still unlikely to work, says Anton Alekseyev, senior lawyer from the firm Yakovlev & Partners.

“For example, new concepts such as ‘actual place of residence’ are being introduced," he said. "If a person is registered in one city, but lives and works in another, then there are no questions. But if, for instance, this person is registered at one Moscow address, but happens to be living at another, then it is almost impossible to prove that he is actually breaking the law."

"Despite this, the proposed amendments suggest this is an offense punishable by fines. As for foreign migrants, over the past few years a clear trend has become apparent: for highly-qualified specialists, the government will simplify the rules for entry and residence, and, for all other foreigners, the process will become more difficult,” Alekseyev added.

Russian migration legislation divides migrants into two categories: highly-qualified specialists and everyone else. A highly-qualified specialist is understood to be a person whose annual income exceeds 2 million rubles. A person in this category needs to register their place of temporary residence within 90 days of arrival, and they will receive a residency permit almost automatically. All other migrants have to register within seven days of their arrival, pass a Russian language exam, and fill in a mountain of paperwork to receive a residency permit. The new amendments to the migration legislation concern both Russian and foreign citizens. In instances where foreign citizens are found to be not living at their registered place of residence, they will also have to pay a fine of 2,000-3,000 rubles in Russian regions, or between 3,000-5,000 rubles in Moscow and St. Petersburg.

He also emphasized that highly-qualified specialists have a special legal status for temporary or permanent residency in Russia. The main criterion for this is unambiguous – it all hinges on people’s salaries. To fall into this category, a specialist needs to receive at least 2 million rubles ($66,265) a year.

A highly-qualified specialist will only have to jump through the simplest possible set of legal hoops to stay in Russia: They will be given 90 days to register, and a residency permit along with other privileges will be granted too them with minimal fuss and documentation.

“The recent changes in the migration legislation send a clear message that Russia welcomes qualified specialists with open arms, but treats all other migrants with caution," Alekseyev said.

"For example, foreigners with an annual salary of less than 2 million rubles will have to pass a Russian language exam, whereas highly-qualified specialists will bypass this stage," he added. "First the process for obtaining residency permits was made difficult for migrants in the lower income bracket, and now it has also become complicated to register their place of residence."

According to the bill’s authors, in 2011 alone 6,400 addresses were shown to have 300,000 registered inhabitants – which means almost 47 people were officially registered as residing at each flat.