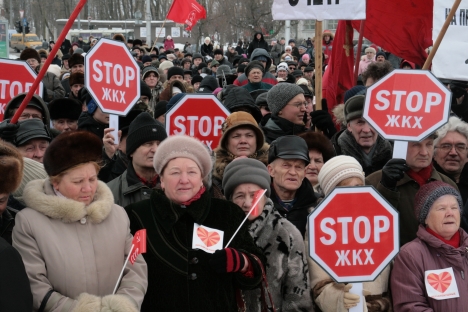 While Russian citizens will enjoy some new rights in 2013, some legal novelties (for example, an increase in utilities prices) are met with indignation. Pictured: A protest against the growth of utility prices. Source: ITAR-TASS

This year, Russian citizens will enjoy some new rights, but lose some old ones. Ogonyok has compiled a list of the most important legal novelties of 2013.

On January 1, 2013, the Dima Yakovlev law ("On measures against persons involved in abuse of fundamental human rights and freedoms, and rights and freedoms of citizens of the Russian Federation") entered into force, after being signed on Dec. 28 by Vladimir Putin in response to the Magnitsky Act adopted in the United States.

In particular, the document prohibits the adoption of Russian children by U.S. citizens, and bans U.S. nonprofit organizations from funding political activity in Russia.

At the same time, New Year's Day also saw the two countries reduce the consular fee from $180 to $160 for the issuance of business, private, humanitarian, and tourist visas. A new 72-hour transit visa for Russian visitors to Beijing also began on Jan. 1. The right to stay in the Chinese capital without a visa for three days will be granted to transit passengers holding a third-country visa and a plane ticket to their final destination.

As of Jan. 1, a new law on the makeup of the Federation Council came into force. Under the new law, candidates for the post of senator on the legislature of a constituent entity of the Russian Federation must be members of the region's legislative assembly. Before, even members of a local village council could run.

The right to nominate belongs to the chairman of the legislative assembly, any of its factions, or one-fifth of its members. The senator will be chosen by the governor of the constituent entity from three candidates nominated to stand alongside the latter in the gubernatorial elections.

Also in force since Jan. 1 is a law to reduce the threshold barrier to the State Duma from 7 percent to 5 percent. The changes relate to the election of members to the State Duma of the seventh and subsequent convocations.

Furthermore, starting from Jan. 1, amendments are in force requiring state employees to publish information about their expenses and those of their spouses and children under 18. It concerns the acquisition of real estate, vehicles, securities, etc. Information must be provided if the amount of the transaction in question exceeds the total family income for the last three years.

Another recently introduced "anti-corruption" law stipulates the mandatory rotation of federal civil servants whose duties include control and supervisory functions. The law provides for a rotation period of 3-5 years, depending on the position of the official.

From September 1, 2013, most of the provisions under the new law "On Education" (which replaces the existing law enacted in 1992 and the law "On Higher and Postgraduate Professional Education" of 1996) will take effect. The law enshrines the basic provisions for reforming pre-school, grade school, elementary school, as well as higher education and beyond. The legislation encompasses everything from economic changes to the content of curricula.

Taxes and other charges

On Jan. 1, the new patent tax system (PTS) entered into force. The tax is calculated at the rate of 6 percent of the potential annual income of individual entrepreneurs. The transition to the PTS is voluntary. The document certifying the right to apply the PTS is a patent to carry out one of the types of business provided for under the Tax Code (47 in total). The patent is granted for a period of one to 12 months.

In addition, excise duties rose on a number of products for 2013. For example, the excise tax on cigarettes and “papirosi” [cardboard-filter cigarettes] now stands at 550 rubles [$18] per 1,000 pieces, plus 8 percent of the estimated value calculated on the basis of the maximum retail price; but the tax cannot be less than 730 rubles per 1,000 pieces.

The excise tax used to be 390 rubles, plus 7.5 percent, and no less than 510 rubles total. The next hike in excise duties on certain types of goods is scheduled for July 1, 2013.

Starting on Mar. 1, the clause under the law "On Privatization of Housing Stock in the Russian Federation," which stipulates the free privatization of state and municipal housing, will be null and void. Citizens will also lose the right to de-privatize housing.

On January 1, 2013, the Federal Law "On Accounting" entered into force, removing the outdated accounting standards and introducing new requirements. In particular, accounting will henceforth be regulated not only the Ministry of Finance and the Central Bank, but by self-regulatory organizations as well. This opens up the possibility of non-state regulation of accounting activity.

Heads of large firms will lose the right to practice personal accounting – that will now be the prerogative of only small and medium business leaders. The new law does not stipulate interim financial reporting.

Furthermore, as of Jan. 1, in accordance with the relevant technical regulation, a ban on the circulation of second-class ("Euro-2") fuel with high sulfur content is in force. Also, freight vehicles carrying passengers and dangerous goods (including buses and trolley buses) must be equipped with the GLONASS satellite navigation system, as of Jan. 1.