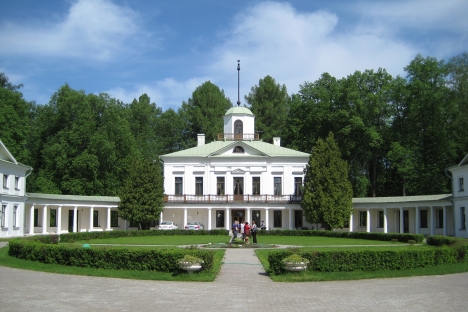 The poet, Mikhail Lermontov spent his summers, as a teenager in the 1830s, at this 19th-century estate Serednikovo just north of Moscow. Source: Phoebe Taplin

The city center is crowded with literary museums and memorials, but you can also make atmospheric trips into the countryside and suburbs to discover lakeside mansions or dachas in the forest.

One of Moscow’s great attractions is the chance to walk in the footsteps of the world’s great writers: Tolstoy and Chekhov, Pushkin and Pasternak. The city center is crowded with literary museums and memorials, but you can also make atmospheric trips into the countryside and suburbs to discover lakeside mansions or dachas in the forest. Some will be well known to booklovers, but other literary retreats are hidden gems even for life-long Muscovites.

The poet, Mikhail Lermontov, famous for his Byronic tales of the Caucasus, spent his summers, as a teenager in the 1830s, at this 19th-century estate just north of Moscow, which once belonged to his grandmother. The neoclassical mansion is linked by colonnades to four wings, each with its own belvedere, designed to look out over the park.

Is poetry always Lost in Translation?

After the revolution, the buildings housed a tuberculosis sanatorium named “Mtsyri” after one of Lermontov’s poems. In 1992, the Lermontov Center secured a 50-year lease on the estate and restored the interiors.

The wooded grounds are a great destination in their own right, with a lake, tearoom, riding school, natural spring, stone bridges and avenues of lime and larch trees. Visitors can catch a train from Leningradsky Station to Firsanovka and then catch bus No. 40.

The estate’s website has a map and the number (+79250106240) to call to arrange excursions (in Russian) around the main house, which is only accessible via a tour.

The poet Alexander Pushkin also spent many childhood summers in the Moscow countryside with his grandmother. Maria Hannibal was descended from Pushkin’s enslaved-African-great-grandfather and her reconstructed house is now a museum with an annual Pushkin Festival on the first Sunday in June.

A statue of Pushkin with his grandmother marks the poet’s favorite place, where, as a child, he said he wanted to be buried, while a second boyish bronze figure looks out across the lake. Trains run from Belorussky Station and take about an hour.

The symbolist poet Alexander Blok is not very well known outside Russia, but the beautiful country estate of Shakhmatovo is worth visiting even if you have never heard of him. Source: Lori/Legion Media

A visit to the wooden house where the poet Alexander Blok lived, surrounded by flowering meadows, is a lovely day trip. Blok’s grandfather called it “a corner of paradise not far from Moscow.”

The nearby village of Tarakanovo has a monument to the poet and his wife next to the dilapidated church where they married, and a small museum. The main estate, a mile away along a country lane, includes a faithful reconstruction of Blok’s charming house, set in wooded gardens, sloping down to a pond.

Tea with Tolstoy, Chekhov or Pasternak

Tolstoy spent most of his life in Yasnaya polyana, and almost all of his books were written there. Source: Lori/Legion Media

Leo Tolstoy’s country estate, near Tula, about three hours south of Moscow is probably the most popular literary day trip and it is certainly worth the journey. The author of War and Peace was born and buried (under a grassy mound) at Yasnaya Polyana and lived most of the intervening 82 years there too.

Prince Sergei Volkonsky, Tolstoy’s maternal grandfather, bought the land in 1763 and built his manor house at the top of the hill.

The atmosphere inside Tolstoy’s house, with its vine-covered veranda, is powerfully charged with reminders of the writer’s life. There are portraits, books and clothes that create that special house-museum illusion that the writer has simply popped out for a walk and might be back for tea. The final room on the tour is the downstairs library, where Tolstoy wrote Anna Karenina.

The museum website gives directions and opening times. There is a log café opposite the gate where you can get a cup of tea or bowl of homemade soup.

Chekhov’s estate Melekhovo in the Moscow region tells the story of the writer’s countryside life and creativity. Source: Lori/Legion Media

Anton Chekhov's country estate south of Moscow hosts a "Melikhovo Spring" international theater festival each year in May, when the garden is full of lilac and cherry blossom. The playwright wrote "The Seagull," "Uncle Vanya," and many of his short stories, while he lived in this wooden house, from 1892 until 1899, before his worsening TB forced him to move south to Yalta.

Trains to the town of Chekhov leave fairly regularly from Kursky Station and take about an hour and a half. From there, the No. 25 bus or a taxi can take you to the little village of Melikhovo. There is no cafe at the museum so stock up in town.

Peredelkino, which is just a twenty-minute train ride from Moscow, is a cluster of literary dachas. Source: ITAR-TASS

The village where Boris Pasternak wrote Dr Zhivago is just half an hour west of Kievsky Station. The title poem of his 1943 collection, "On Early Trains," describes this journey from Moscow on the electric train, the "lemon-with-incense breath" of the pine trees and the lily of the valley, whose delicate white flowers can still be found in the woods around the writers’ village at Peredelkino.

The interior of Pasternak’s white-trimmed brown dacha is markedly austere. In the bare bedroom and study are his boots, coat and hat. The conservatory, with its samovar and cups, looks out onto the overgrown orchard. The memorial house-museum of Russia's best-loved children's author, Kornei Chukovsky, with its ‘wonder tree' covered in shoes, is round the corner and also worth visiting.

Alexander Solzhenitsyn, whose books about life in Stalin’s gulags are known around the world, is buried in the picturesque Donskoy cemetery. Fans might also be tempted to visit the village where the reclusive writer, who died in 2008, chose to spend his final years.

The orchards, dachas and gold-domed churches of Troitse Lykovo are like an island of old Russia among the skyscrapers of modern Moscow. The village is on top of a riverside cliff, across the Moscow River from the island of Serebryany Bor (“silver pine forest”). Strogino is the nearest metro station.

Chekhov was buried next to his father at the Novodevichy Cemetery. Source: Lori/Legion Media

The world-famous Novodevichy Convent, with its celebrity cemetery, is close to Sportivnaya metro. Through the archway into the older section is Gogol’s bust or Bulgakov’s boulder. Nearby, visitors can spot the graves of actors and directors from the Moscow Arts’ Theater marked with the stylized seagull logo, along with Chekhov’s elegant art nouveau arch, under the autumn leaves or the falling snow.