Zadonsk: Refuge for the saint who inspired Dostoevsky 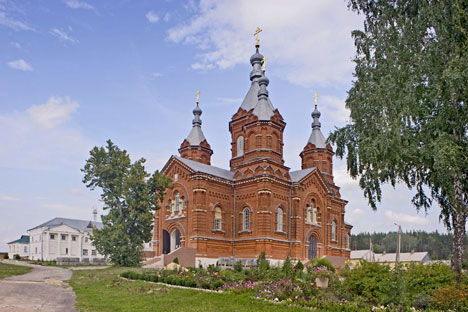 The teaching and writing of St. Tikhon of Zadonsk drew pilgrims to this small town in central Russia for centuries.

The small town of Zadonsk, located in the gentle, rolling hills of central Russia’s Lipetsk Region, is filled with churches and monasteries associated with St. Tikhon of Zadonsk, an 18th-century prelate who became one of the most revered spiritual figures in Russia. The writings of this sage, who was said to give council and consolation to all who came to him regardless of their status, exerted a profound influence on Fyodor Dostoevsky.

Zadonsk was officially established as a town in 1779, but earlier it was known as Teshevka. That settlement arose after the founding of a monastic retreat in the early 17th century by two monks from Moscow's Sretensky (Purification) Monastery.

Seeking greater solitude, the monks Cyril and Gerasim arrived at a then-deserted area around the Teshevka River. According to church documents, the only item of value that they brought with them was a copy of the Vladimir Icon of the Virgin, one of the most revered icons in Russia. In 1630, the small community completed its first log church, dedicated to the Vladimir Icon. In 1692, the revered icon survived a fire that swept through the wooden monastery and thus became known as a miraculous image.

The town, like the monastery, developed slowly, as the surrounding rich agricultural lands were settled. Not until 1741 did the monastery complete its first masonry church, dedicated to the Nativity of John the Baptist. A few other brick structures followed, but no buildings from before the end of the 18th century have survived in either the town or the monastery.

In retrospect, the most notable event in the town's history during the 18th century was the retirement to the monastery in 1769 of Tikhon, Bishop of Voronezh and Yelets. Despite frail health, Tikhon (1724-83) remained at the monastery for another 14 years.

Tikhon's sermons and other writings published during this final period in his life were widely valued for their wisdom and generosity of spirit. He gained renown as a spiritual teacher who led a modest, ascetic life while remaining sensitive and compassionate.

In 1846, Tikhon’s remains were discovered during the construction of the new Vladimir Cathedral. Carefully preserved, the relics were attested to have miraculous properties. In 1861, Tikhon was canonized by the Russian Orthodox Church.

The essence of St. Tikhon's thought is particularly evident in the concept of divine redemption in the soul of the sinner through repentance. The writer Fyodor Dostoevsky was profoundly influenced not only by this interpretation of redemption, but also by the broader image and wisdom of St. Tikhon. As early as 1867 Dostoevsky mentions St. Tikhon as the fullest expression of the "genuine Russian soul."

Deeper connections followed in Dostoevsky's literary work, first in the novel The Possessed, which deals with the sources of political terrorism and the pathology of nihilism. In one of the novel's most challenging parts, "At Tikhon's," the main character, Stavrogin, visits a monk called Tikhon in order to give him a written confession of a repulsive crime. The reader is told that Tikhon is a bishop who has retired to a monastery for reasons of weak health, and that he is known for his compassion and wisdom. These personal details correspond with what is known of the life of St. Tikhon.

The image of St. Tikhon reappears in the form of the elderly monk Zosima in Dostoevsky's final novel, The Brothers Karamazov (1880) Father Zosima is modeled partly on starets Ambrosy, whom Dostoevsky visited at the Optina Pustyn. Yet Dostoevsky also drew upon the wisdom, patience and monastic endurance of St. Tikhon in the creation of Zosima.

In his literary portrayals of the monks Tikhon and Zosima, Dostoevsky combined moral firmness with penetrating psychological insight, humility of spirit with philosophical acuity. The writings of St. Tikhon of Zadonsk can be seen as a critical to Dostoevsky's resolution of the most profound and disturbing of moral questions.

Even before his canonization, the veneration of Tikhon led to a steady increase of pilgrims to Zadonsk throughout the 19th century. To accommodate the visitors the monastery – now dedicated to the Nativity of the Virgin – undertook major building projects, including a soaring new bell tower with a Church of St. Nicholas and flanking wings containing hostels for pilgrims.

The main project was the rebuilding of the Cathedral of the Vladimir Icon of the Virgin (1845-53) to a design by the renowned architect Constantine Thon. Damaged along with much of the rest of the monastery during the Soviet era, the cathedral has been impressively restored.

The monastery's other large church, the Nativity of the Virgin, was built in the same period (1834-62) and in a similar Russo-Byzantine style. The monastery contains four additional churches – two of which are dedicated to St. Tikhon – as well as chapels, cloisters, a large refectory building and several other structures.

Beyond the town center are other monuments that honor St. Tikhon. Among them is the colorful Trinity Cathedral, all that remains of the town's last monastic institution, the Trinity-St. Tikhon Convent, formally established in 1888. The cathedral was built in the 1880s by Alexander Cui, a student of Constantine Thon and the older brother of the well known composer Cesar Cui. It is an excellent example of the eclectic Russian Revival style and its interior has been well preserved.

Just to the north of Zadonsk, in the village of Tyunino, is the Ascension Church, also designed by Alexander Cui. It was built In the 1890s as the main church of a convent dedicated both to the Life-Giving Icon of the Virgin and to St.Tikhon. Formally established in 1867, the convent no longer functions, but the church has been revived for parish use.

Indeed, the veneration offered to St. Tikhon of Zadonsk is reflected in the dual dedication of most of the area's monastic institutions. Three miles to the west of Zadonsk is the St. Tikhon-Transfiguration Convent, founded in 1873 and now restored to active use.

Today, as in centuries past, the monastery founded by Cyril and Gerasim and chosen by St. Tikhon remains at the core of a town that has been called the "Russian Jerusalem."