Why Russians are obsessed with dragons (not bears!) 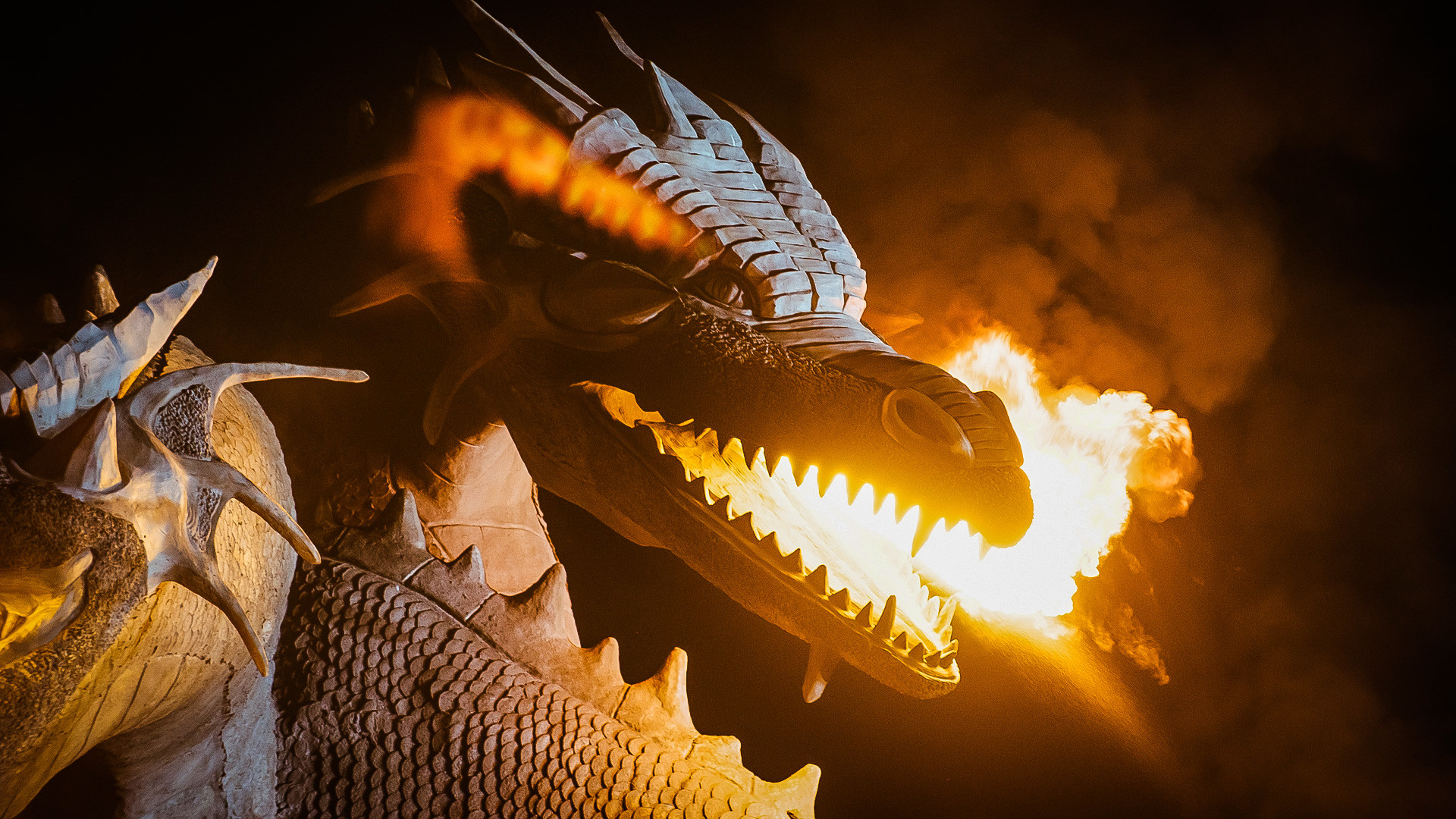 Vyacheslav Platsynda
Monuments in the country aren’t all about Lenin and dead poets, you know… Russians also love the mythical beasts from Games of Thrones.

Did you know that dragons are among the most popular sculptures in Russia? These terrifying winged serpents can be spotted in many cities across the country, and are even the symbol of many settlements. Surprised? 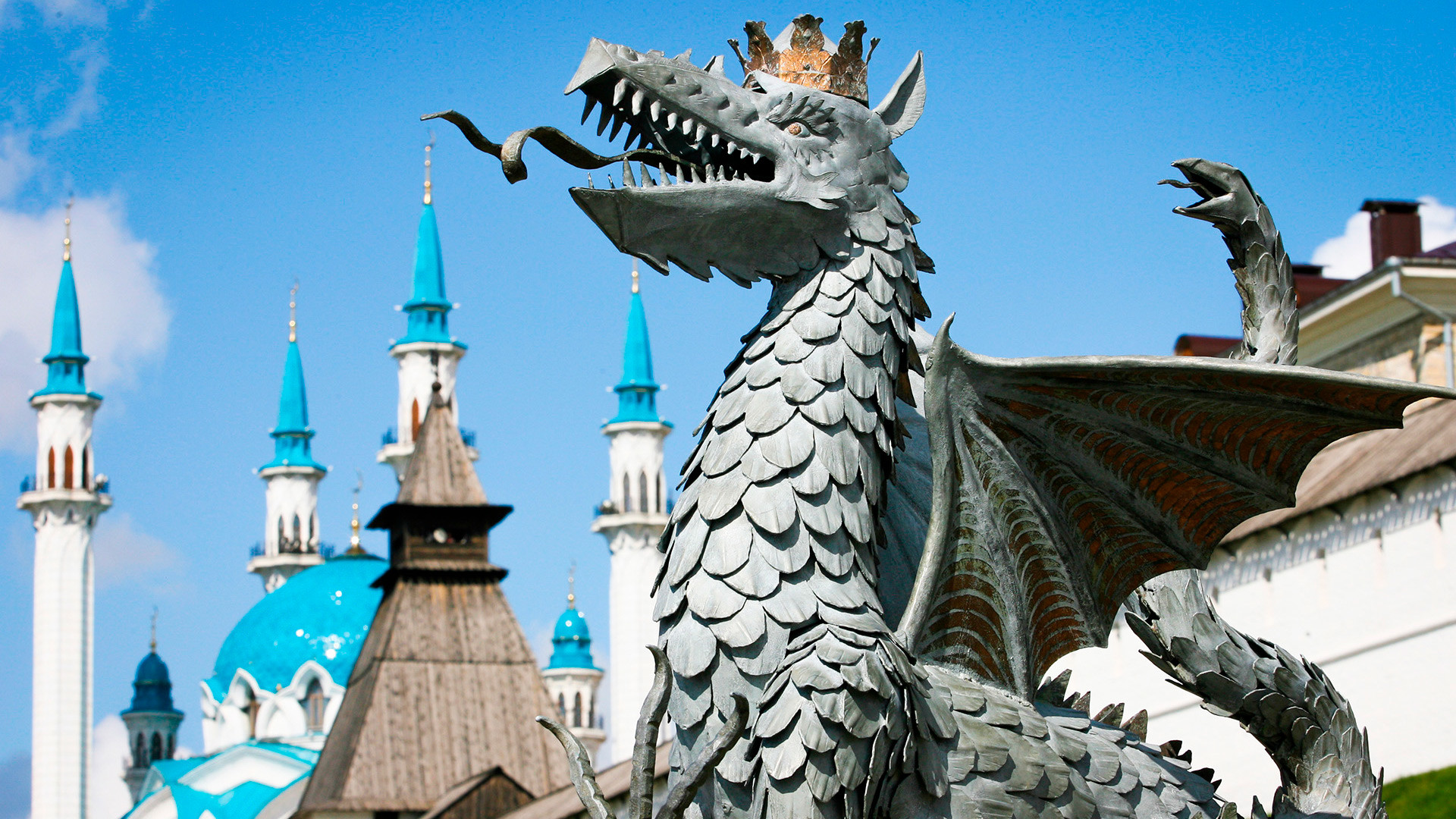 Zilant, a winged serpent, is an epic Tartar character and a symbol of Kazan. According to legend, he lived on a local mountain. Now they say Zilant lives on Lake Kaban and guards the treasure of Tsarina Syuyumbike. The dragon’s image was on the Kazan Khan’s stamp, as well as the Kazan Region’s coat of arms. Now a golden crown bearing the image of the dragon is depicted on the city’s flag and coat of arms, and often decorates buildings and fences. 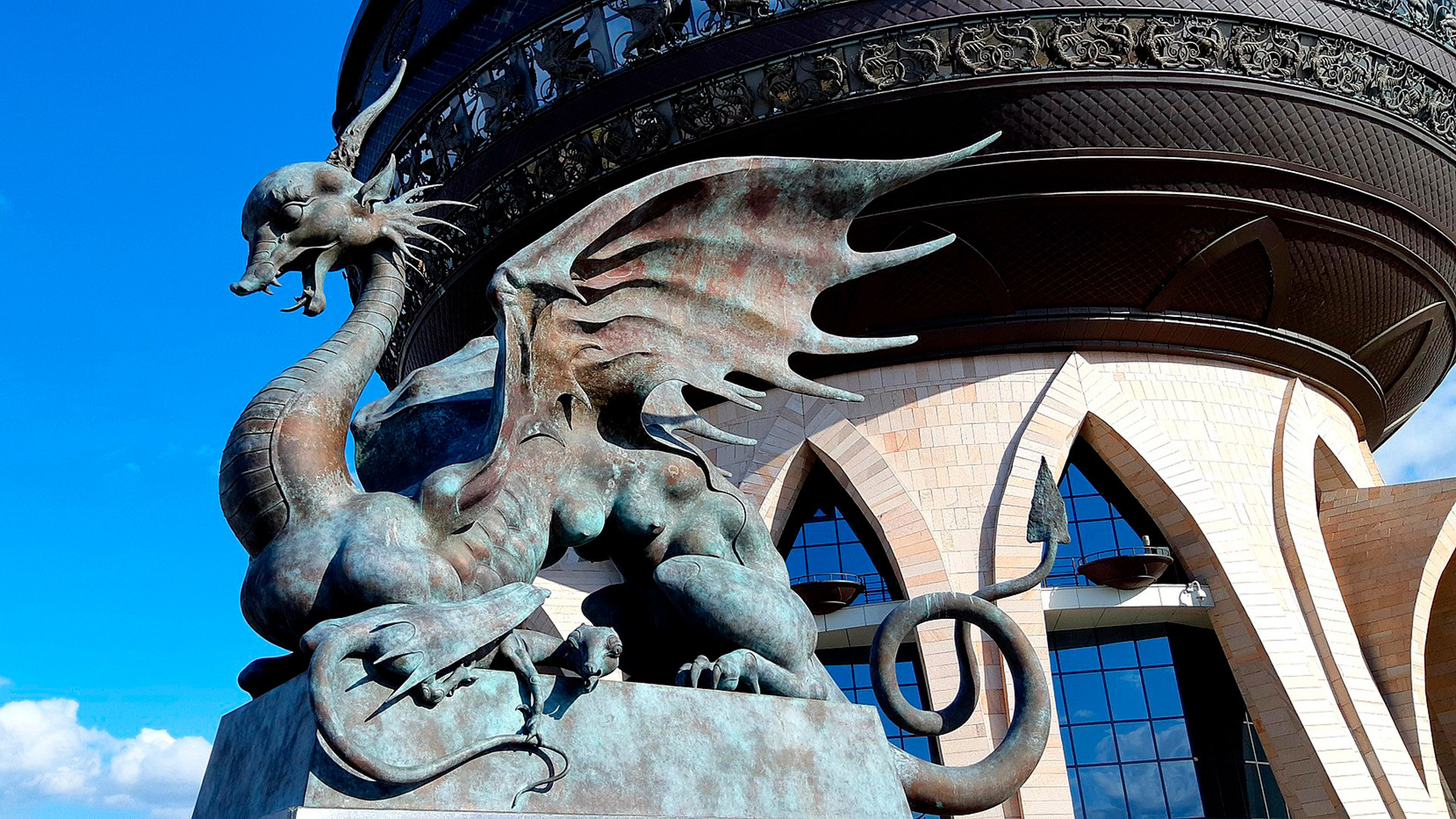 Two more famous Kazan dragons guard the Kazan family center – the building looks like a huge cauldron for national Tatar dishes, which was built for the Universiade. 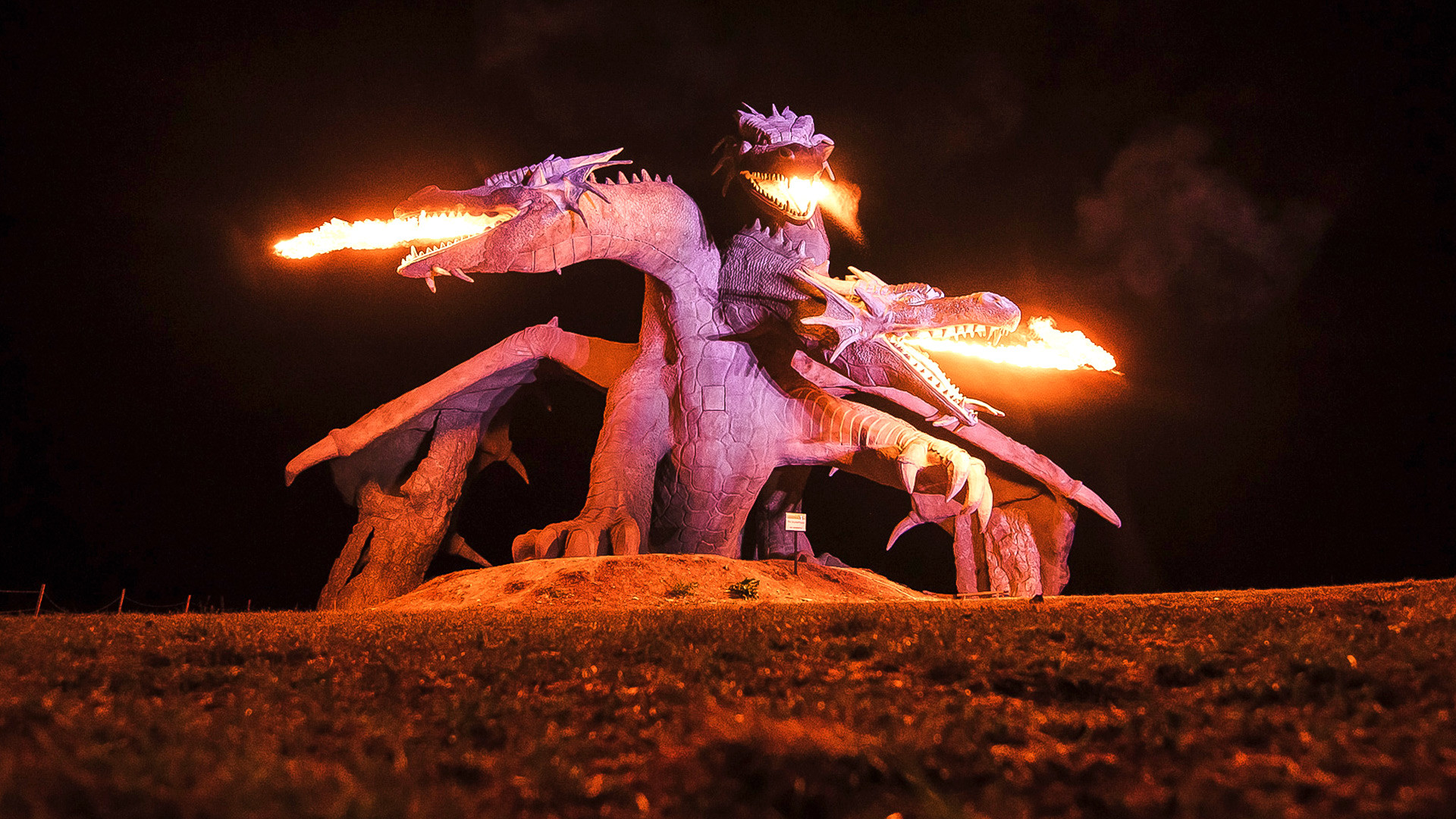 If you ask a Russian where they’re going, you might hear the answer: “To Kudykina Gora” (“Wherever Mountain”). However, no one has ever seen this legendary mountain (because this phrase is used when a person doesn’t want to reveal his plans). Well, we've managed to find this place in the Kudykina Gora open-air amusement park. A huge three-headed dragon called Zmey Gorynych (literally “A dragon from the mountain”) is king here. According to Slavic folklore, the dragon guards Kalinov Bridge, the border between life and death. He’s terrifying and can spew sparks, smoke, and fire. In the park, Gorynych is the most popular attraction. Every weekend at 6.30 pm you can see the mythical Russian dragon breathing fire. 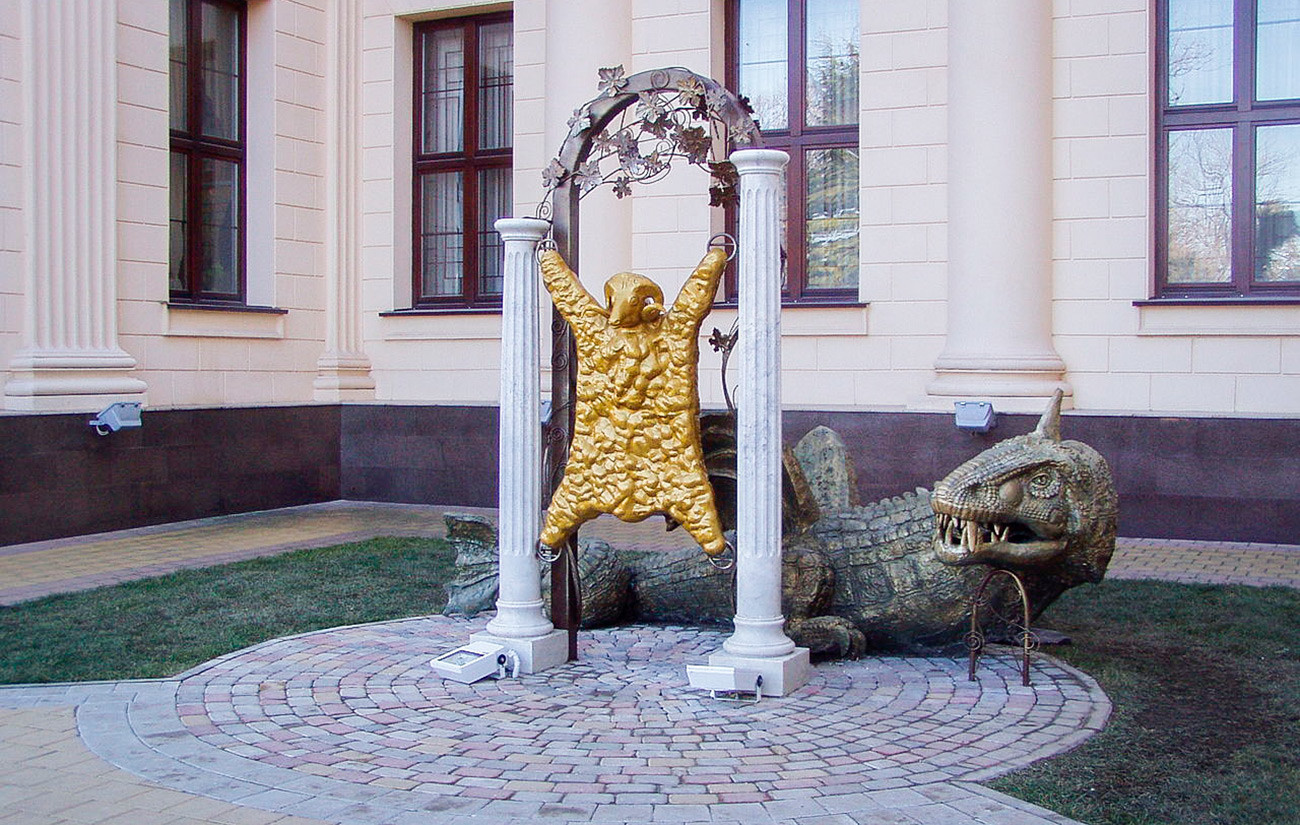 In Sochi, a dragon guards the Golden Fleece. A symbolic composition based on the ancient Greek myth about Argonauts appeared in this resort city about 10 years ago. The creators wanted to show the link between the 2014 Winter Olympics and the first Olympic games. Moreover, some think touching the Golden Fleece improve one’s finances - whether you believe it or not. 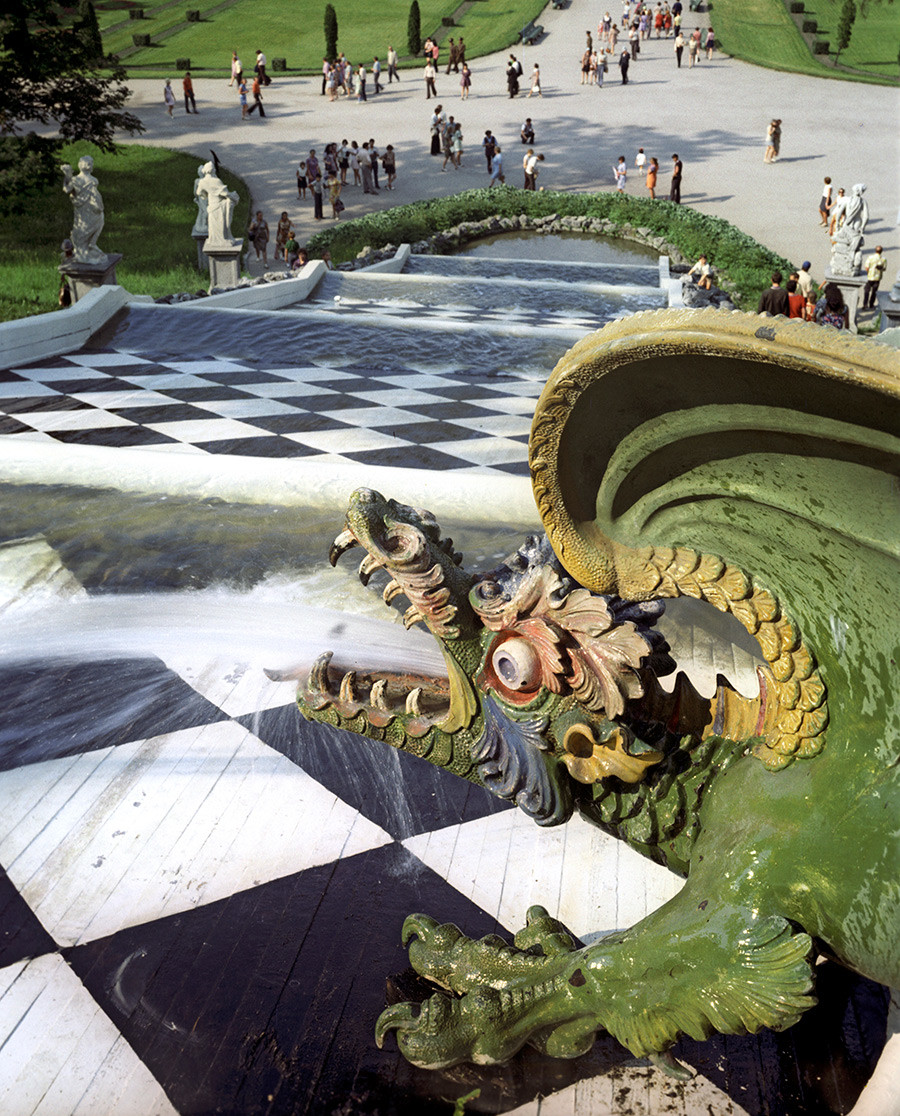 Peterhof, the “Russian Versailles,” is one of the country’s most famous and picturesque tourist attractions, drawing millions of visitors to St. Petersburg every year. The park is famous for its fabulous fountains. One of the oldest is the huge Chess Hill Cascade. The upper grotto of the structure is guarded by three dragons. Water comes out of the beasts’ mouths and falls into the pool below before flowing into the lower grotto. 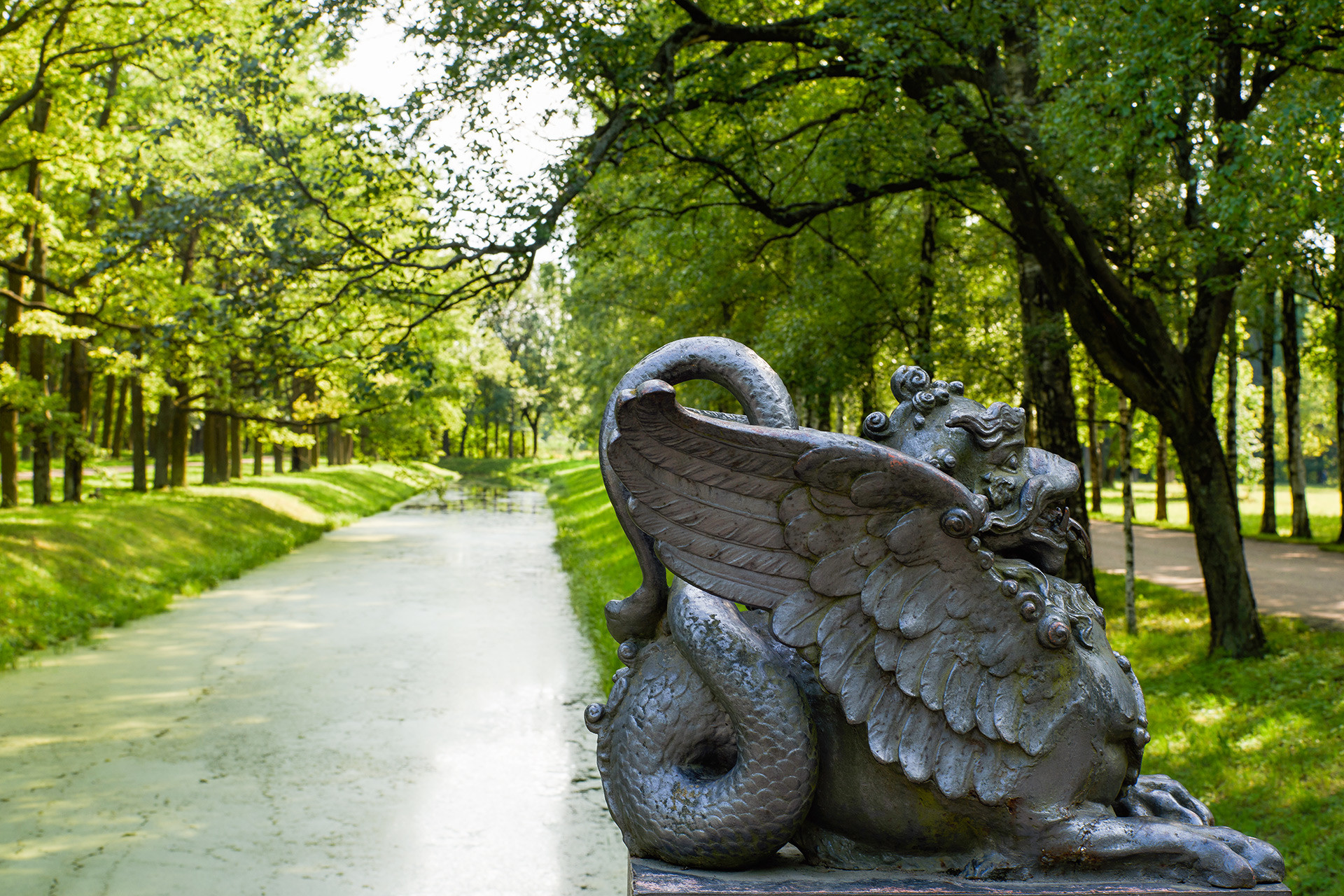 The tsars’ former summer residence, now called Pushkin (its former name is Tsarskoe Selo) has inspired many Russian poets and artists. There are several interesting bridges in the Chinese style, which was popular in the Russian Empire in the 18th century. The Dragon’s Bridge is decorated with four iron-winged serpents on granite pedestals. 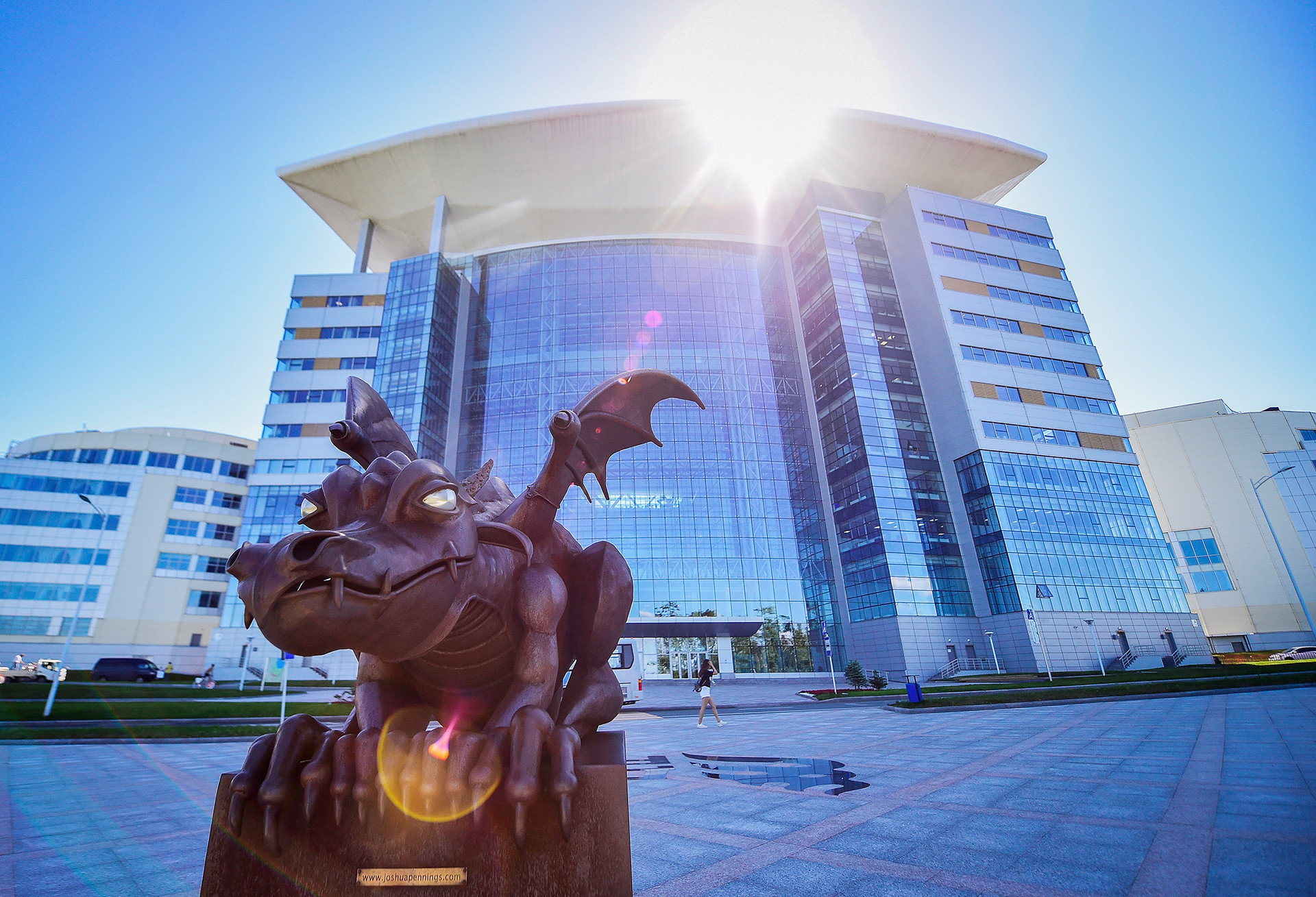 The symbol of the campus of the Far Eastern Federal University on Russky Island is the "Friendly Dragon," a favorite of students, staff, and visitors. The sculpture was made by Dutch artist Joshua Pennings and presented to the university in 2013. According to the legend, the clever and brave dragon possessed a magical gem that gives wisdom and knowledge, but dropped it - centuries later it was discovered on the spot where the university stands today. Since then, the dragon has been regarded as the guardian of knowledge and a fighter of laziness.

Almost an exact copy of one of the Daenerys’s kids from Games of Thrones appeared in Krasnoyarsk’s outskirts in the summer of 2018. The iron giant is grinning and fanning its wings. However, there are some problems with the tail (it’s not added yet), but locals like him as he is. The story behind his appearance is not known. 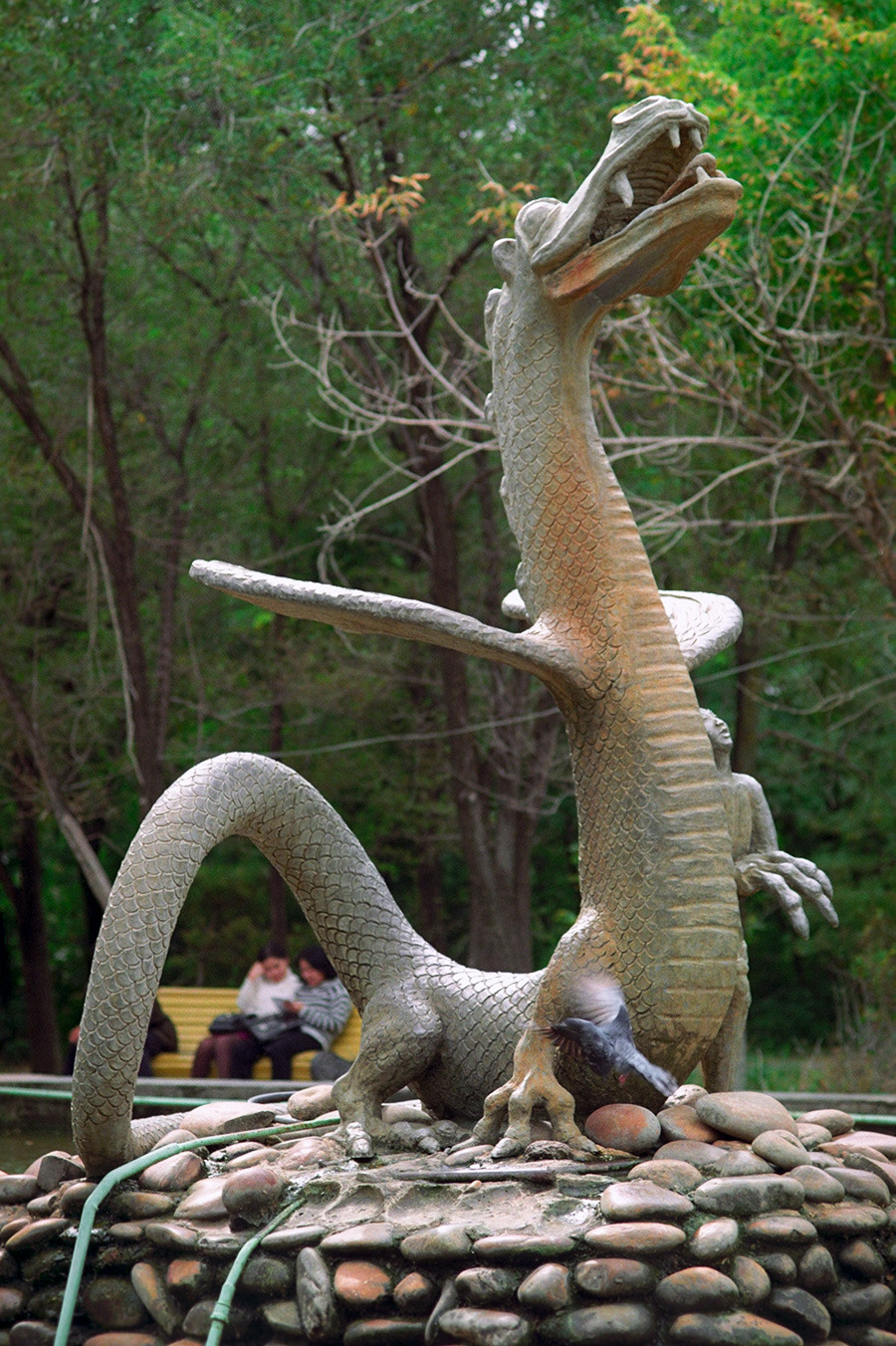 The capital of the Republic of Kalmykia also has its own dragon. The Boy and Dragon fountain was created in the city center in 1995, based on the Kalmyk epic. According to the legend, a local boy repels the beast, which is accompanied by severe rain and thunder when it lands. By chasing the dragon away the brave boy saves his folk and village from destruction 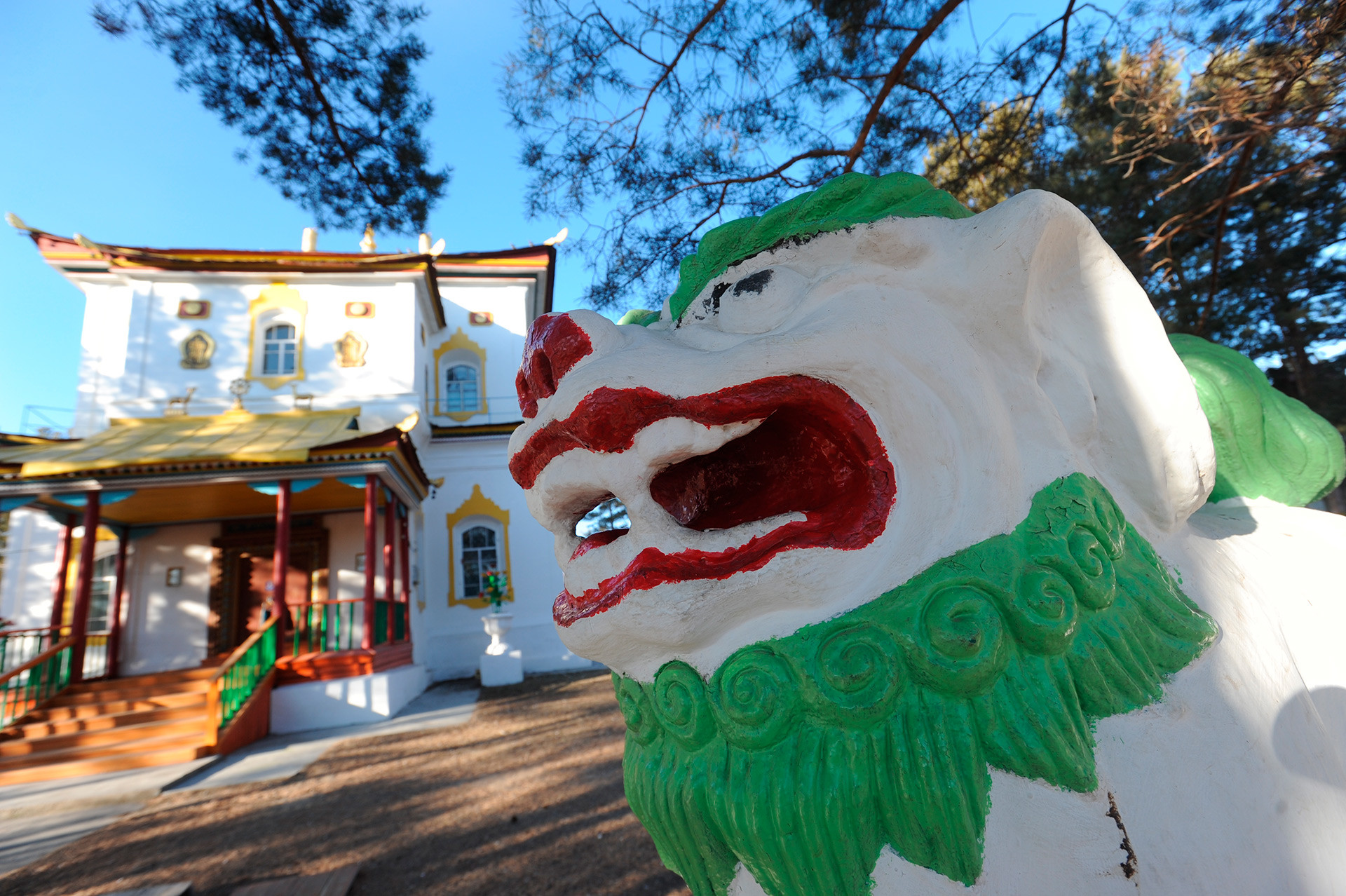 The Aginsky is one of the largest Buddhist monastery complexes in the Zabaikalsky Territory. The first temple was founded in the early 19th century. Datsan was built according to the canons and decorated with many sculptures of dragons, a symbol of wisdom and heavenly power. 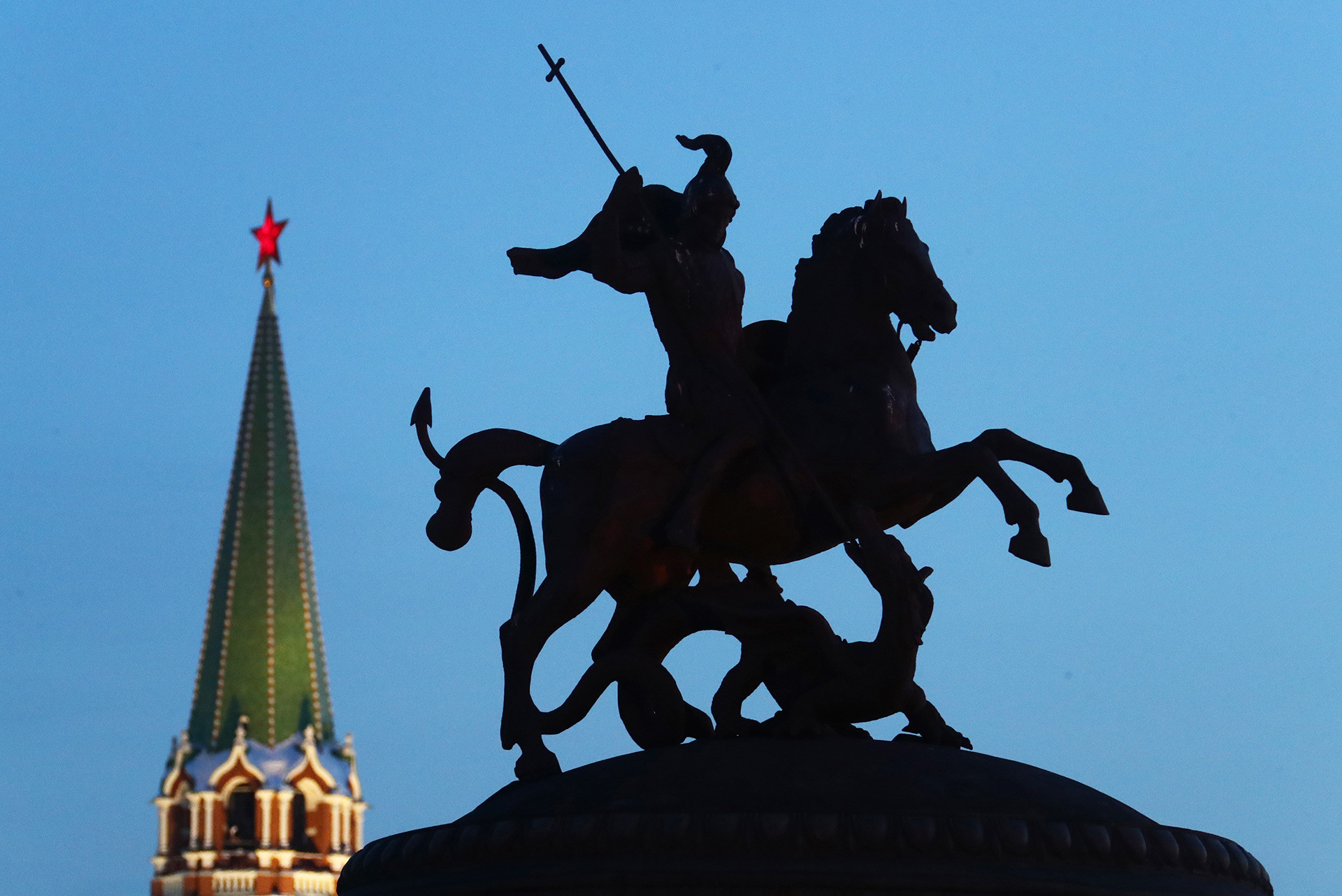 . George piercing a dragon with a spear has been the symbol of Moscow since the Medieval period. He’s the defender of the people and a protector against foreign invaders. This symbol is depicted on the coat of arms of Moscow and Russia. And of course, this is one of the central monuments in the capital.