6 most important Buddhist sites in Russia

Travel
Anna Sorokina
Ramil Sitdikov/Sputnik
How did Buddhists make their way to the southern steppes of Kalmykia and why don’t people in Altay like shamans?

Alongside Russian Orthodox Christianity and Islam, Buddhism is one of the most widespread religions in Russia. There are even entire regions where the majority of the population is Buddhist. 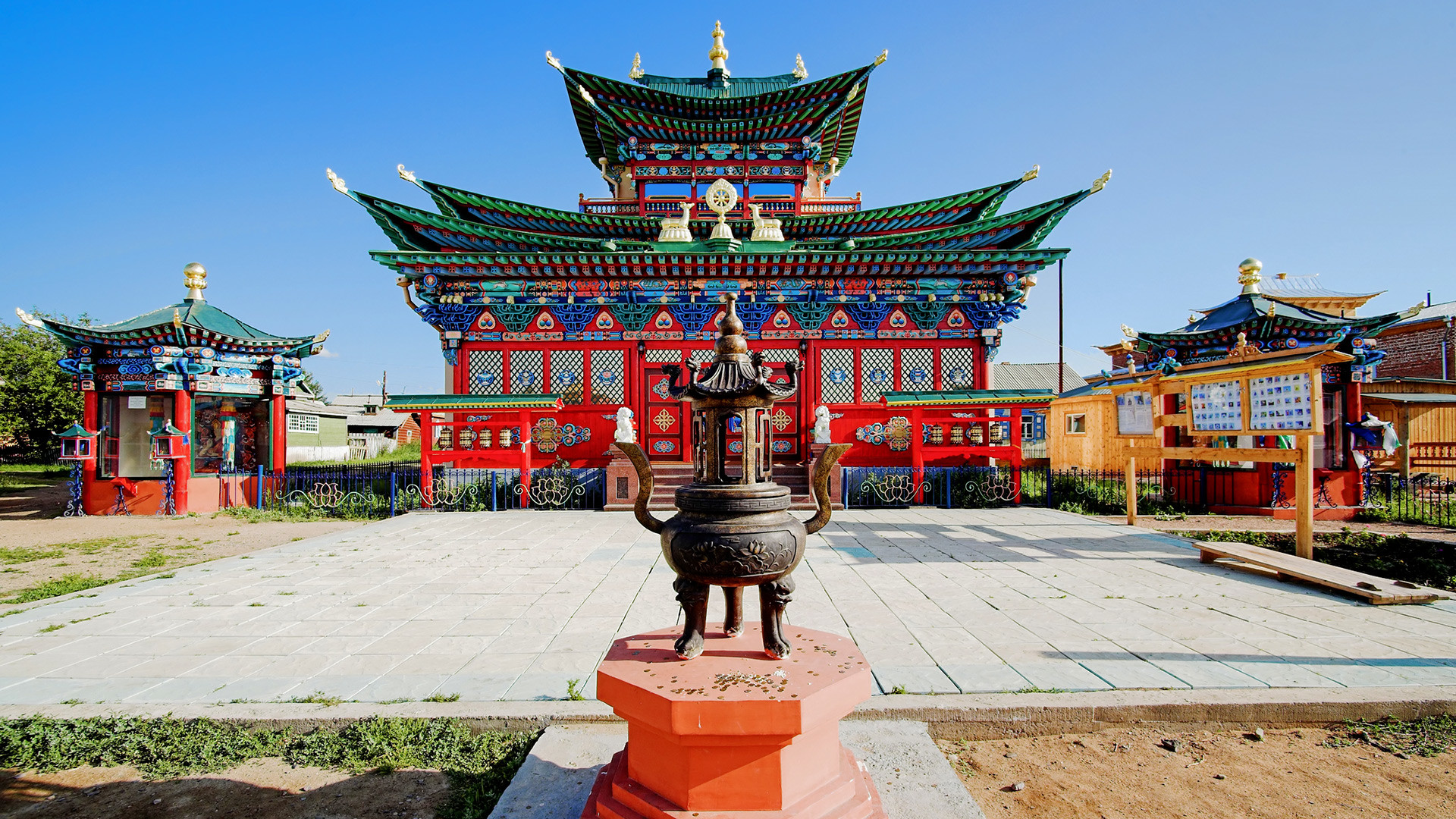 Temple of the Pure Land in the Ivolginsky Datsan.

The majestic Ivolginsky Datsan is the residence of Pandito Hambo Lama and then main pilgrimage site for Russian Buddhists. The temple was opened in 1945 around 30 km from Ulan-Ude, the region’s capital. The datsan is home to a huge library and a Buddhist university that trains novices. The monastery is home to the mummy of the 12th Hambo Lama, Dashi-Dorzho Itigilov, who lived in the early 20th century. Legend has it that in 1927 he sat in a lotus pose and meditated until he ceased to show signs of life. He was buried in this position in a special cedar cube. In 2002, the body was exhumed and said to show no signs of decay. Pilgrims believe that Itigilov can fulfill one's most cherished wishes.

Some 90 km from Ivolginsky Datsan is Atsagat Datsan. Built in 1825, it is one of the oldest datsans in Russia and many Buddhist spiritual leaders came from here. Atsagat Datsan is known as a major center of Tibetan medicine. In the early 20th century, the clinic received medical supplies from China and Mongolia and invited foreign professors to come teach. In 1936, Soviet authorities closed the datsan down, converting it into a boarding school for street children. The temple was restored to believers only in 1991.

Another sacred place for Buddhists in Buryatia is Nilova Pustyn, which is located 500 km from Ulan-Ude at the foot of the Sayan Mountains. Locals believe that the spirit of the mountains lives here and ask it to bestow them with domestic bliss.

The Buryats have many traditions associated with the mountains. For example, Uran-Dushe Mountain is regarded as the patron of heavenly dragons that descend to the earth to do blacksmithing, and those who see a reddish glow will be happy for the rest of their life. 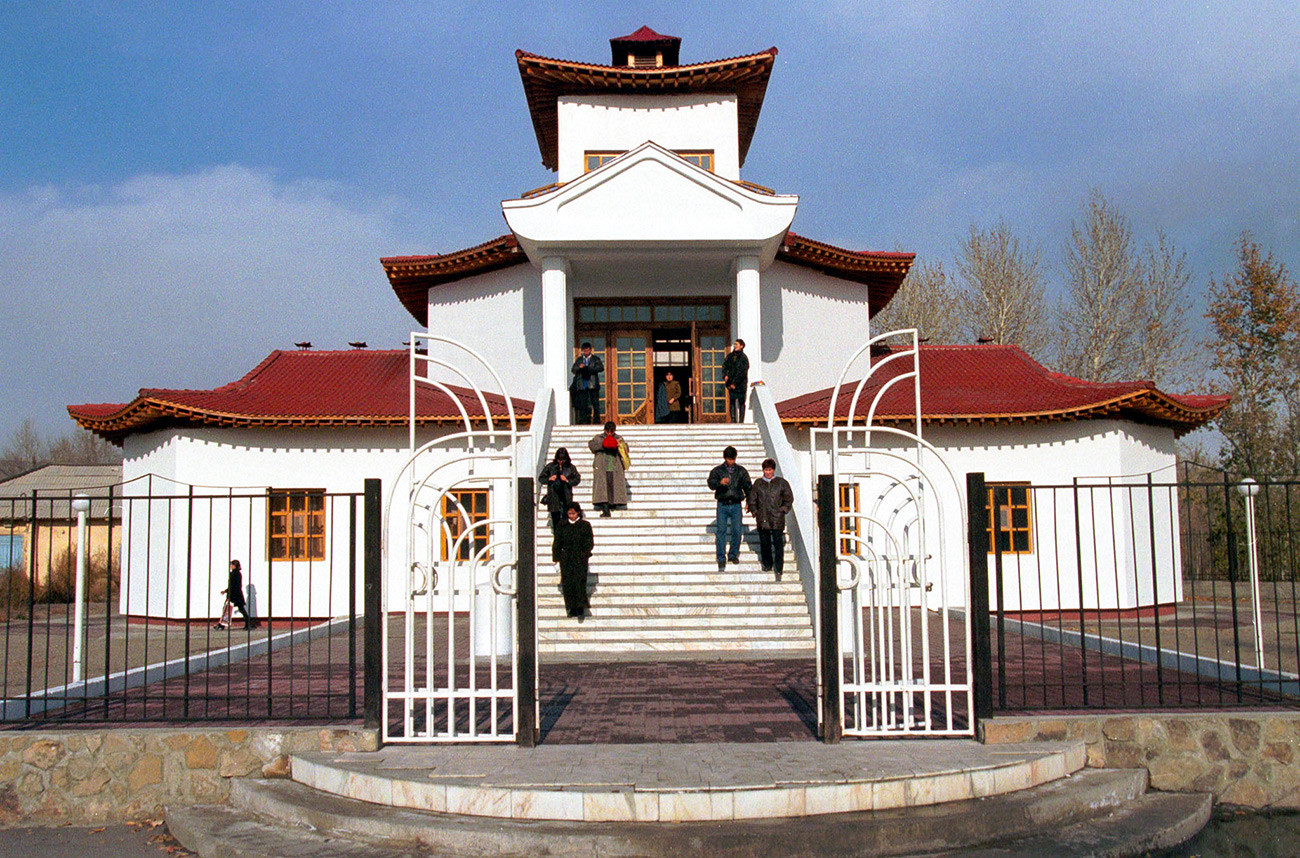 The indigenous population of this East Siberian republic descends from nomads. Back in the Middle Ages, when the territory of modern Tyva was part of the Mongolian empire, they were Tibetan Buddhists. Interestingly, Buddhism in Tyva is intertwined with local traditions of shamanism. Depending on the situation, people may turn either to a shaman or to a lama.

By the beginning of the 20th century, Tyva was home to two dozen temples, but all of these were closed during Soviet times. So far, only a fraction of them have been restored.

The main one is Tsechenling, located near Kyzyl, the capital of the Republic of Tyva. Translated from the local language, its name means "an abode of boundless compassion." Locals say that before entering the temple one must walk around it three times, clockwise and touching all the corners. Tsechenling was only built in 1998, but if you look closely you will notice that all its corners are already abraded from wear. It functions not just a place where people come to pray, but also as a spiritual center that hosts classes in the Tibetan language, yoga and philosophy. 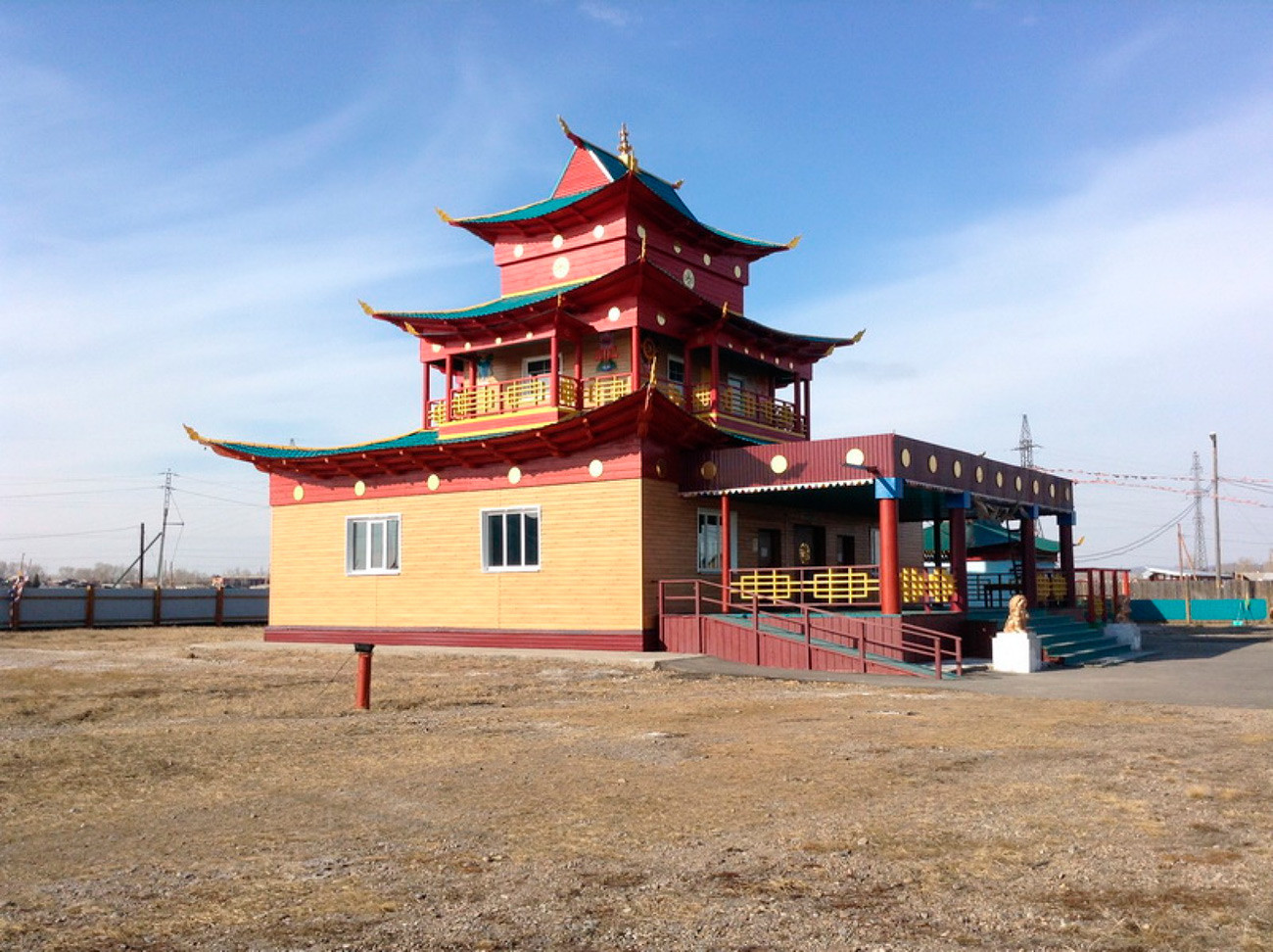 The Irkutsk region neighbors Buryatia, and many local residents here also practice Buddhism. As in other regions, datsans were destroyed during the Soviet period and began to be restored only at the end of the 20th century. Most of the temples were located not far from Irkutsk in the Ust-Ordynsky District. The oldest of them, Alarsky Datsan, was built in 1814.

In 2011, another temple was opened in Ust-Orda, a village near Irkutsk. It is called Tubden Darzhelin, which in Tibetan means “The Land of Revival of the Buddha’s Teaching.”

On Olkhon Island in the middle of Lake Baikal, there is a special place known as Shamanka Rock or Cape Burkhan. Locals believe that this is where Baikal’s main deity lives. According to some locals, shamanic rituals involving cruel sacrifices were held here. Nowadays there is a Buddhist altar. 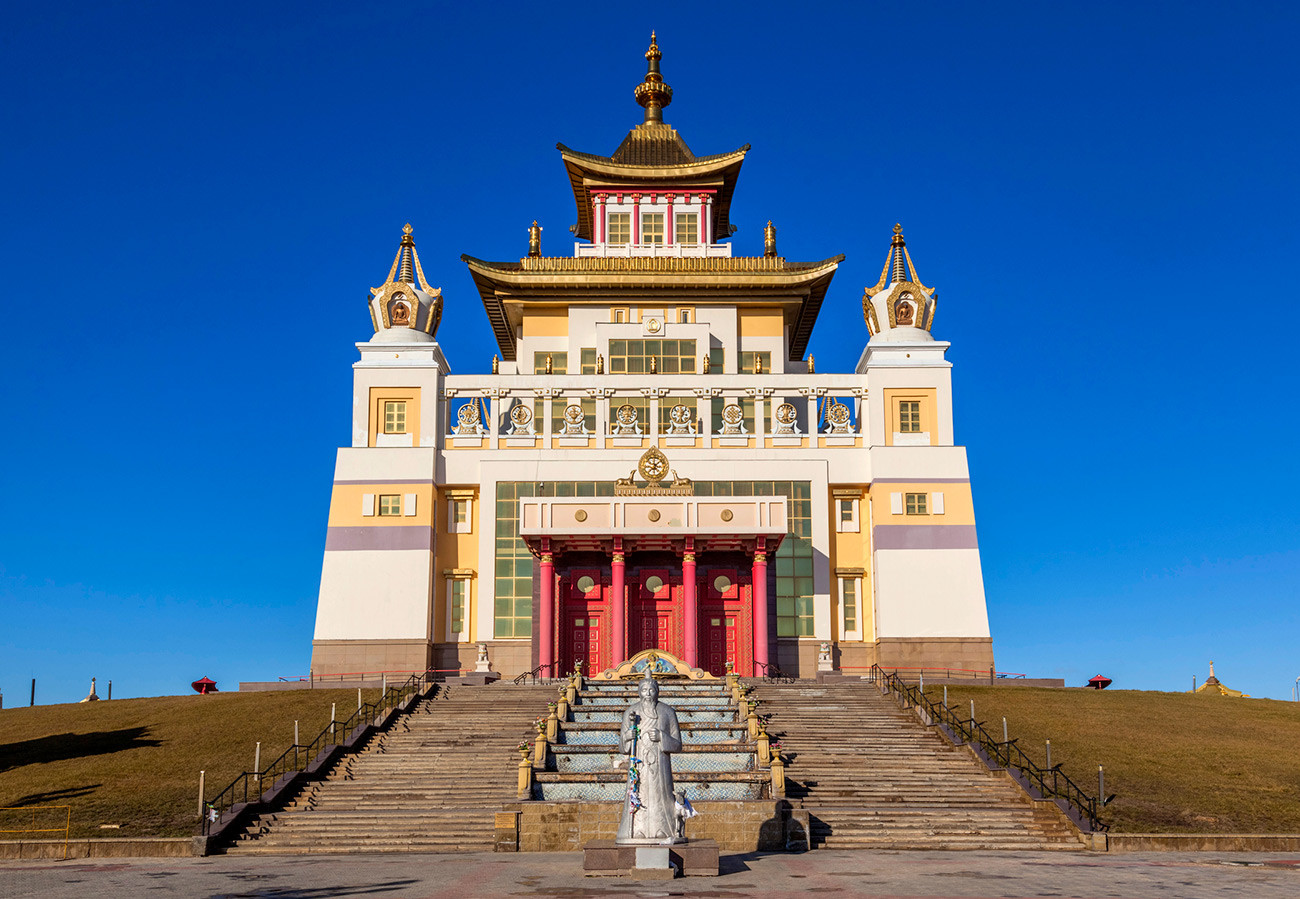 Kalmykia, located in the south of Russia is the only Buddhist region in Europe. The ancestors of the Kalmyks came from the Mongolian steppes in the early 17th century and brought Buddhist traditions with them. The temples in Kalmykia are called khuruls. The most famous of these is located in the region’s capital, Elista.

The golden abode of Buddha Shakyamuni, built in 2005, is one of the city's main tourist attractions. The majestic white building decorated with gold houses a nine-meter Buddha statue, the largest in Russia and in Europe. The khurul is open to all so long as they take off their shoes and move only clockwise to avoid disturbing the circulation of energy. 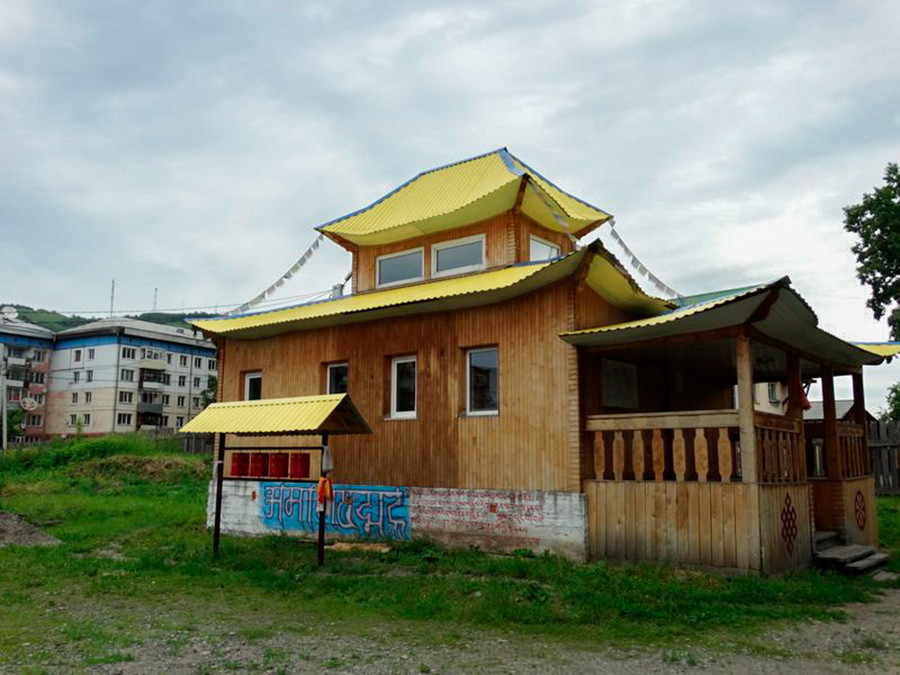 People seeking spiritual enlightenment have always been attracted by the energy of the mountains. Altai is one of these mysterious places. The local religion here is Burkhanism, which is a mixture of Buddhist beliefs and ancient customs. Its followers reject “black magic” and worship only light spirits. As such, they reject sacrifices and appeals to otherworldly forces and regard shamans as messengers of evil forces.

They also put great effort into observing certain rules of behavior: no smoking tobacco, no cutting down wet trees, wearing only headgear that is white and yellow in color, among others. 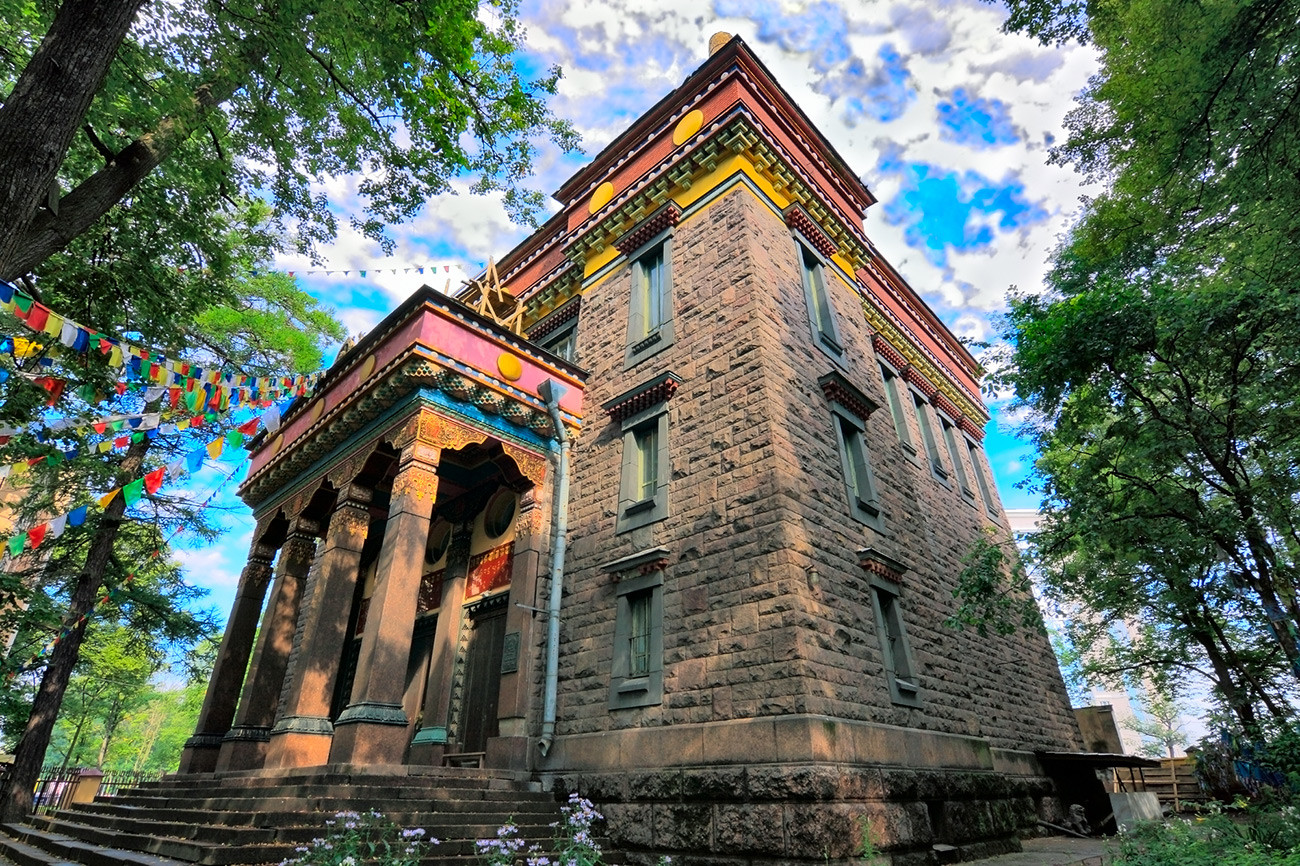 Datsan Gunzechoyney lies on the outskirts of the city and was built in the early 20th century. Its stained glass windows are based on sketches by the famous Russian artist Nicholas Roerich. The temple is considered the northernmost Buddhist datsan in the world.

Numerous services are held here. In the center of the temple there is a five-meter statue of the Buddha, covered in gold. For those who want to nourish not only their spirit but bodies too, there is a cafe at the temple where one can try traditional Buryat dishes.