How many time zones are there in Russia? 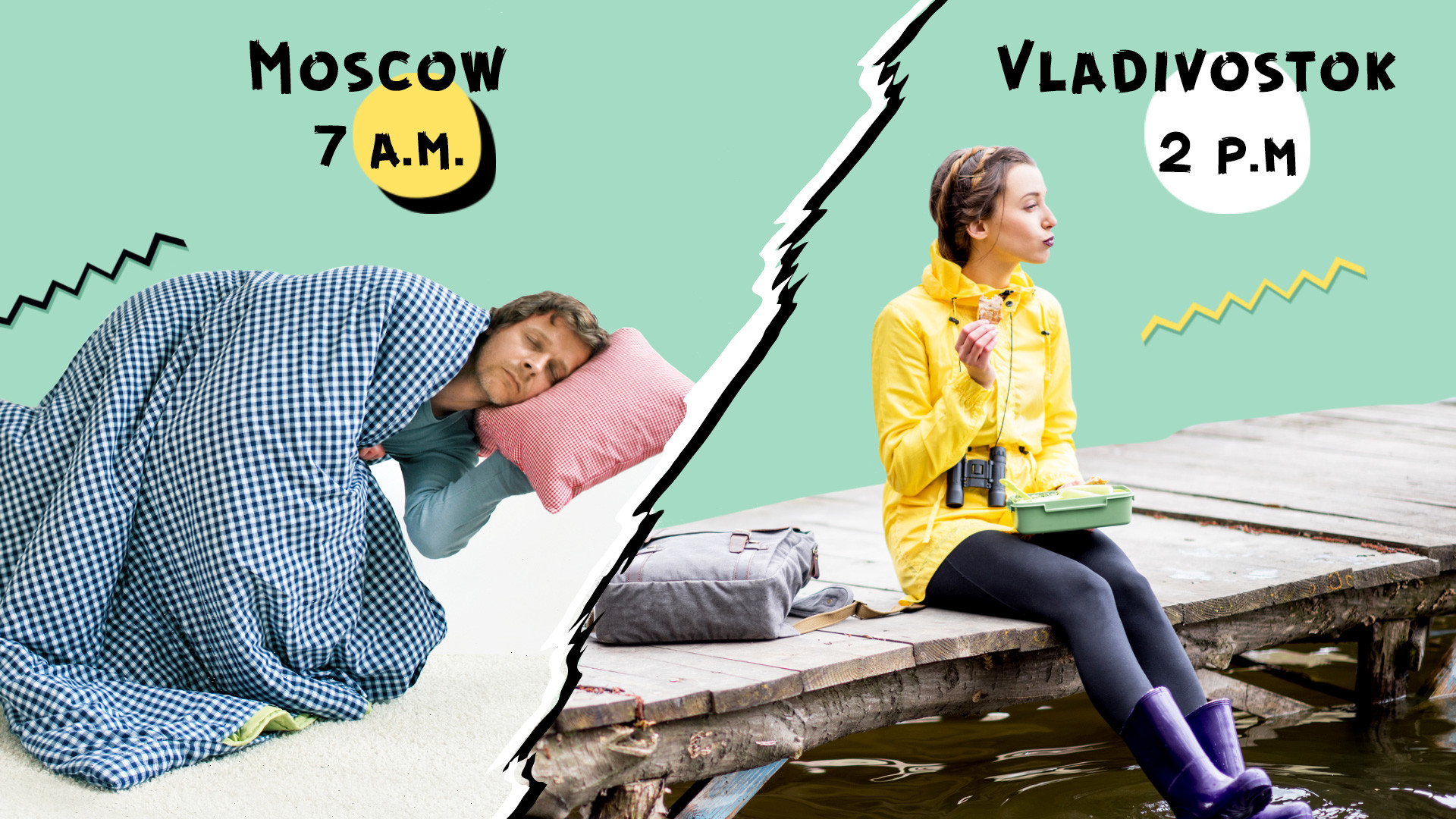 Getty Images, Freepik
Here is a little puzzle for you. You are in Moscow and need to call your friend in Yakutsk: How many hours do you need to add or subtract so that you don’t wake them up at four in the morning?

The world is divided into 24 time zones, and Russia covers 11 of them. This is the most time zones in any country (not counting overseas territories). When the east of Russia is in the middle of the working day, the western regions are still fast asleep. The closest runners up for the most time zones in one country are the United States and Canada, which both have six.

Just imagine that a mere 150 years ago the world had no time zones at all. Cities established their own so-called “local solar times,” whereby midday came when the sun reached its zenith. The advent of railroads is what created the need to accurately synchronize time with other localities, and time zones were introduced, first in the United Kingdom, the U.S. Canada, and then in other countries. Thus appeared Greenwich Mean Time (GMT, i.e. the time in London), which in the 1970s was replaced by the more accurate Coordinated Universal Time (UTC).

In the Russian Empire, the railroads used St. Petersburg time for all schedules. Officially, Russia joined the international system of time zones only after the Bolshevik Revolution. In 1919, the country was divided into 11 time zones with boundaries that went along railroads and rivers. Subsequently, time zone boundaries in Russia were revised on multiple occasions in attempts to bring them into line with regions' administrative borders.

But if you thought the whole time zones saga ended with the collapse of the Soviet Union, think again. In 2009, Russia decided to reduce its number of time zones from 11 to 9, but then in that decision was reversed. Furthermore, some regions cover different time zones. For example, Yakutia now has three time zones (UTC +9, +10, +11). To make things a little easier, people in Russia often refer to Moscow time rather than UTC and designate their time zones as MSK +1, etc.

In 1917, Russia for the first time switched to , which was one hour ahead of the local solar time, but four years later, the idea of switching between summer and winter time was abandoned. In 1930, clocks again moved forward an hour to what was called decree time.

For 50 years, the Soviet Union lived by that time until it was decided again in 1981 to start switching to summer time and back.

In 2011, the government responded to complaints from the many Russians who found it difficult to adapt to changing the clocks twice a year (some even argued that it adversely affected their health), and the practice was abandoned once again. As a result, some regions ended up with a time that was an hour or sometimes even two hours ahead of their geographic time! However, it turned out that the wrong time – in this case – had been chosen as the permanent one.

The government was bombarded with complaints from people who were unable to function normally during what they described as an extra long and dark Russian winter. Finally, in 2014 the government ruled that clocks would go back an hour and remain there. And so it is that, for five years now, Russia has been living permanently in time.

What time zones are there in Russia 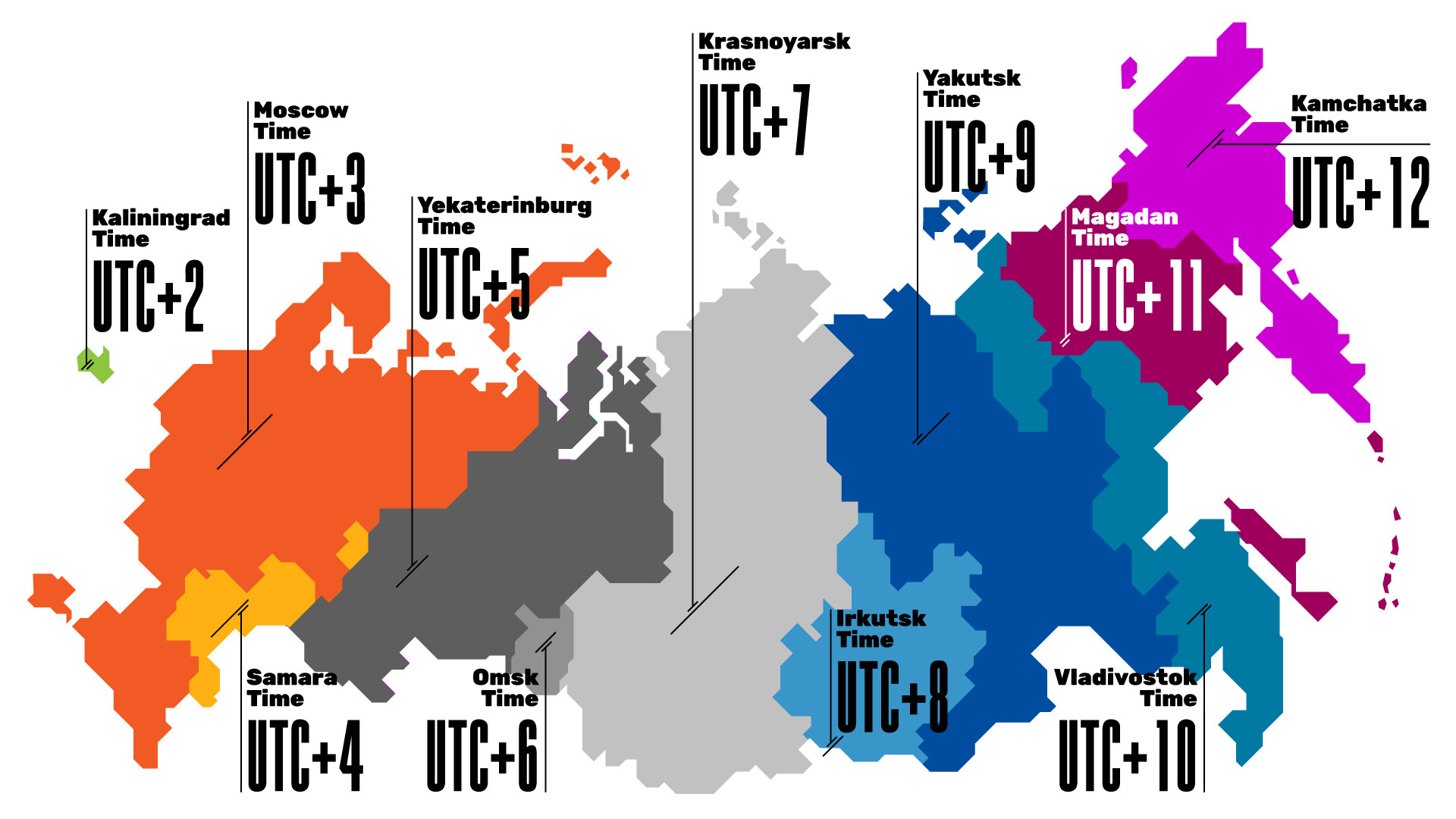