Yaroslavl: What to see in the Golden Ring 'capital' 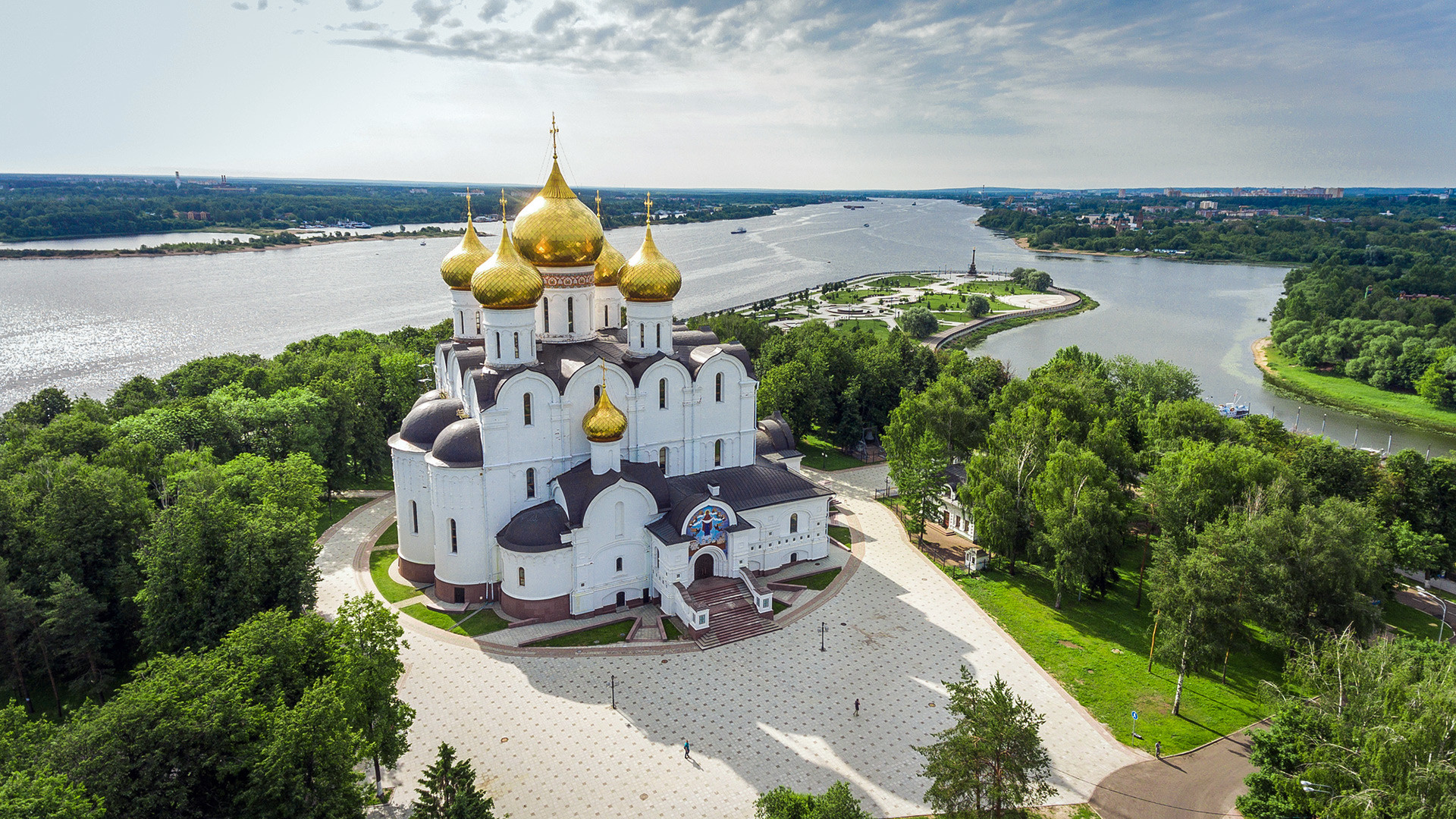 Legion Media
It was the very first Russian city on the Volga, founded in Old Rus by the wisest of wise rulers. For many centuries it flourished as one of the country's richest settlements, and even today it has not lost its noble luster.

How to get there: from Moscow (Yaroslavsky railway station): 3.5-5.5 hours, depending on the train

On a picturesque spit at the confluence of the Volga and Kotorosl rivers lies the ancient heart of Yaroslavl, now a UNESCO World Heritage site. At the very tip of the spit, there stands a monument dedicated to the millennial anniversary of Yaroslavl. Few Russian cities boast such a venerable age. 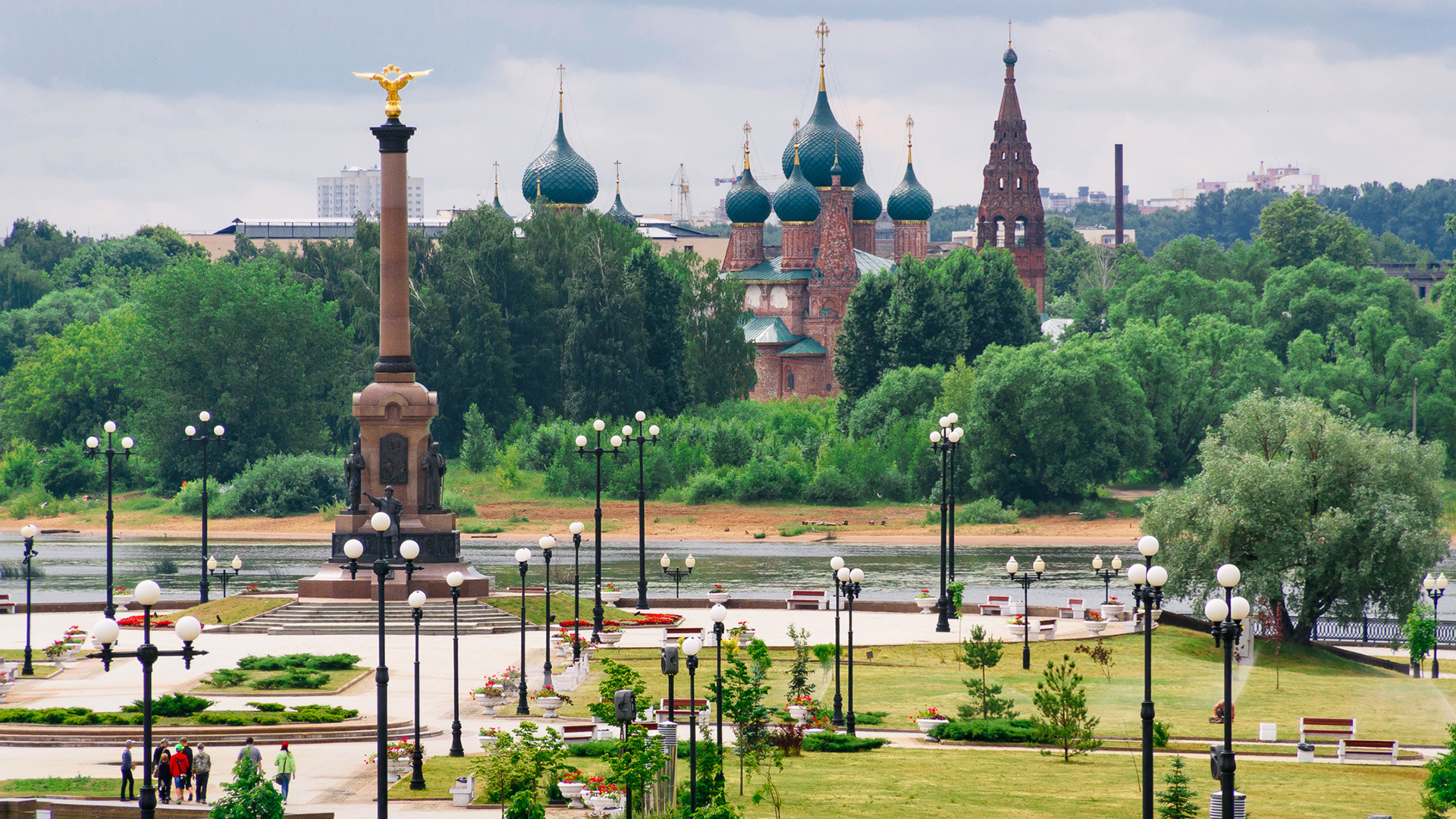 Furthermore, Yaroslavl was the first Russian city to be sited on the Volga. What about Kazan, you ask, that was founded five years before Yaroslavl! Yes, but it became part of Russia only under Ivan the Terrible in the mid-16th century, and so does not qualify as a city of Old Rus.

Why was Yaroslav considered wise?

The man in whose honor the city is named deserves a special mention. Yaroslav was the son of Prince Vladimir, who baptized Rus. Under Yaroslav, many churches were built and society and culture blossomed. He drafted the first legal code in Russia, and established relations with Byzantium and many European states as well. 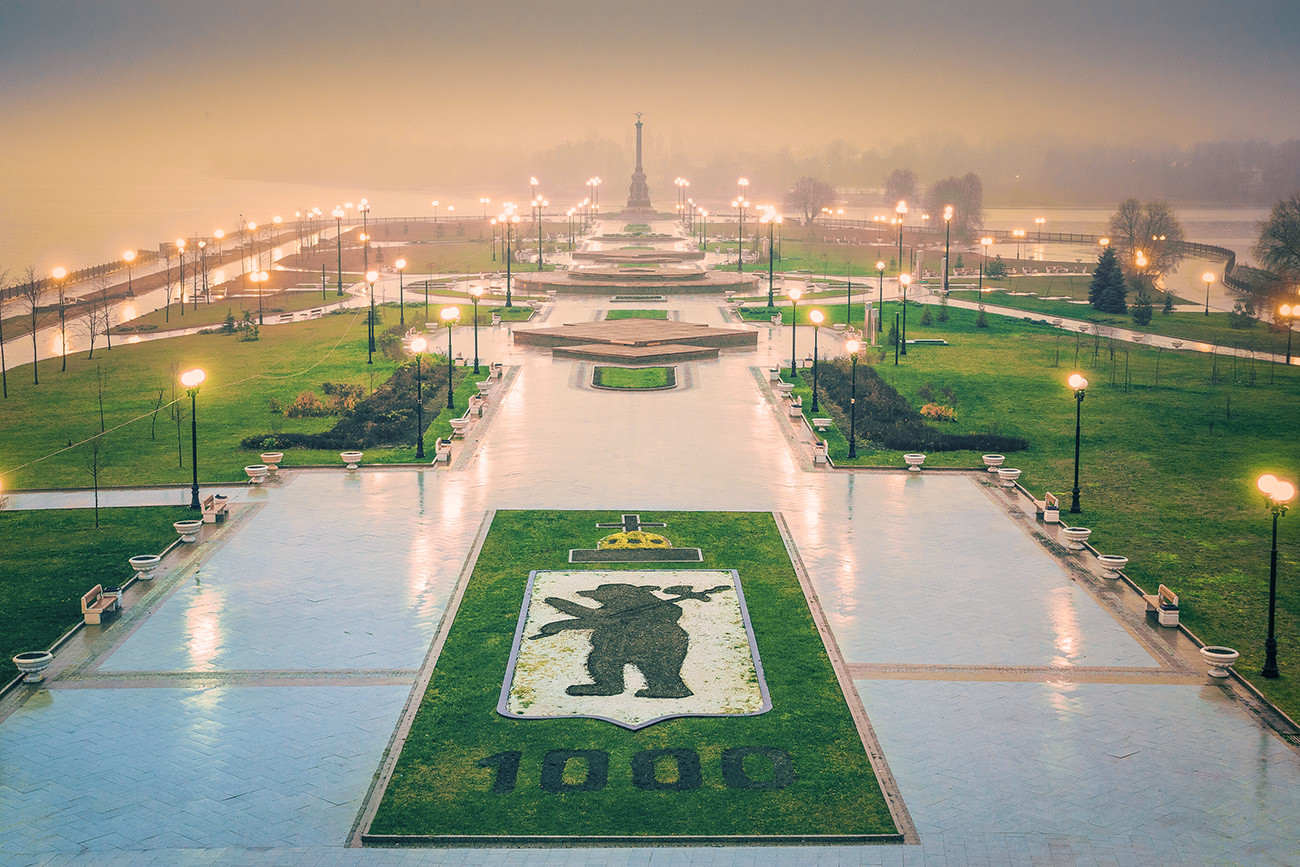 Park on the spit dedicated to the millennial anniversary of Yaroslavl

His biography reads like that of a high-flying top manager. He began with North-East Rus (north-east with reference to Kiev), the capital of which was Rostov Veliky. Hence, this period is known as the “Rostov reign,” during which he founded Yaroslavl (about 60 km from Rostov). Later, his father granted Yaroslav the title of prince of the Novgorod lands, which were far richer – ancient Novgorod was a large trading city, and even part of the Hanseatic League. 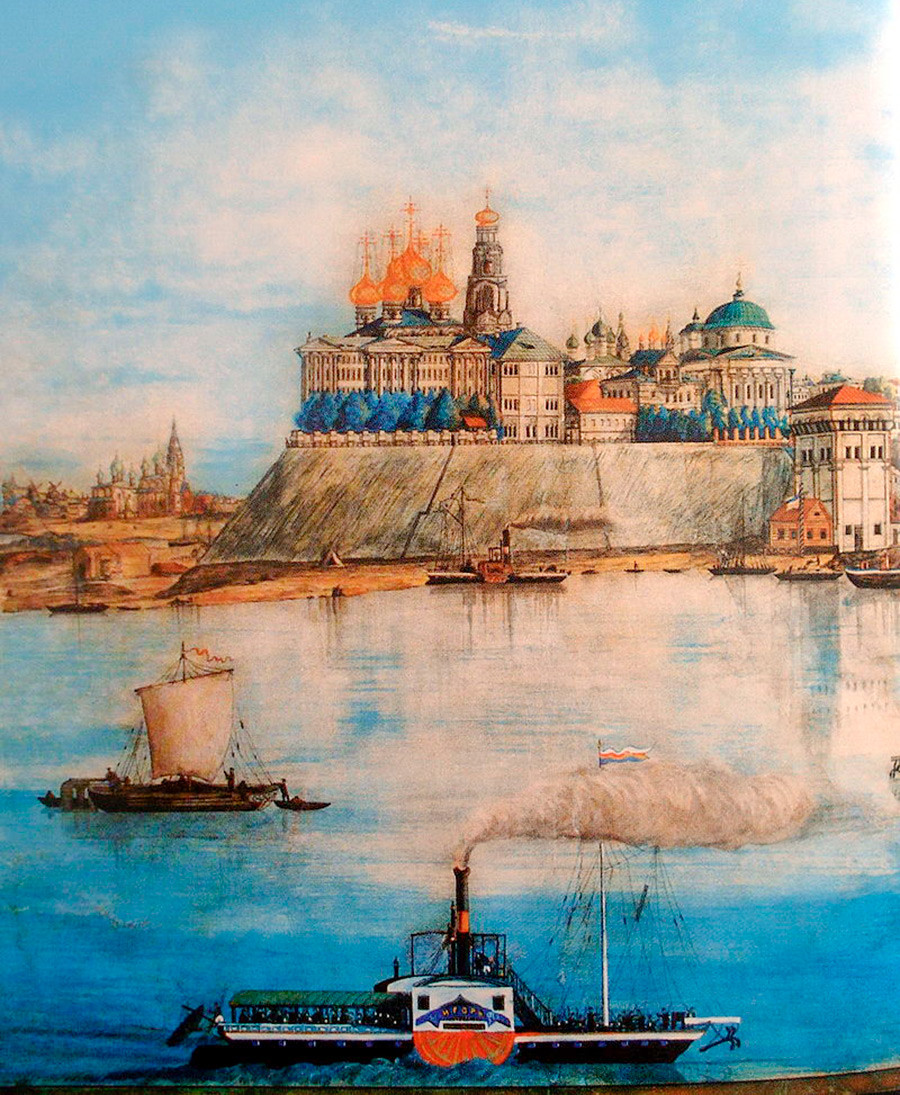 On learning that his father wanted to appoint Yaroslavl’s younger brother as heir to the throne in Kiev, the wise prince was displeased (he considered his own CV to be stronger) and rebelled against his father (though the latter died before he had time to act). After a long struggle with his brother, Yaroslav became the prince of Kiev, and hence the main ruler in all of Rus. There in Kiev, he built the famous St. Sophia Cathedral, and also liberated the country from the marauding Pechenegs, a semi-nomadic people of Turkic origin. 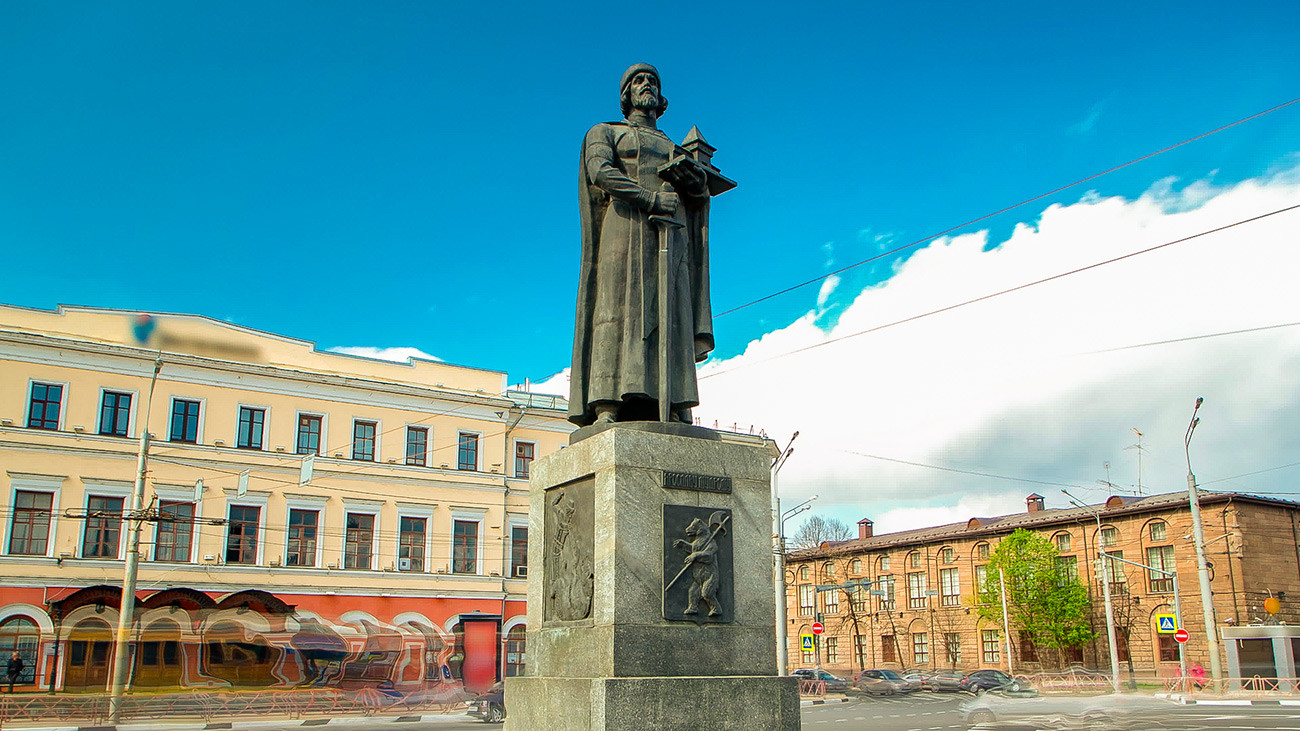 Monument to Yaroslav the Wise

The city of Yaroslavl is featured on the 1,000 ruble banknote

Incidentally, Yaroslav was married to the daughter of the Swedish king, and his own daughter, Anna Yaroslavna, married Henry I and became queen of France!

As in any old Russian city, Yaroslavl contains a huge number of churches and several monasteries. You can try to visit all of them, of course, but be warned that even enthusiasts risk culture fatigue.

The one place you definitely need to visit in Yaroslavl is the museum reserve. This high-walled fortress on a steep bank of the river may look like a kremlin, but no, it is the former Transfiguration Monastery of 13th-century vintage. It was turned into a museum in 1865, when the cloister shut up shop. 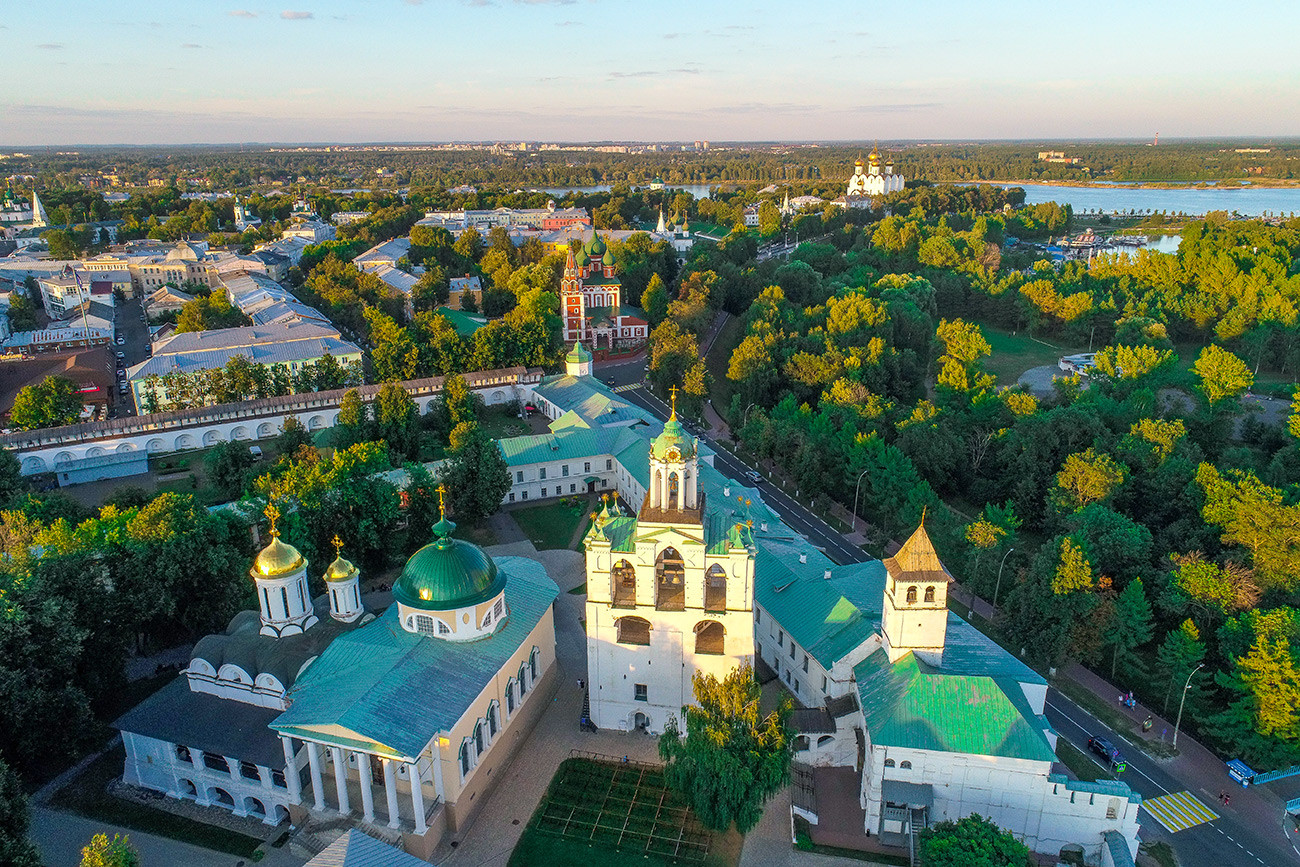 Enter through the Holy Gates, and make sure to go to the main Transfiguation Cathedral, built in the 16th century and the oldest edifice in Yaroslavl to have survived intact to this day. A large collection of icons is on display in the chambers, and there is also an exposition dedicated to the history of the region and the main work of ancient Russian literature, The Tale of Igor’s Campaign.

Also on the territory is an enclosure where the real-life city symbol, Masha the bear, lives and receives visitors.

The Church of Elijah the Prophet

Besides the fortress, we recommend a visit to the Church of Elijah the Prophet. According to legend, it was here that Yaroslav the Wise founded the first church in honor of Elijah the Prophet, since that particular day was a church holiday in memory of this saint. In the Orthodox tradition, it is now celebrated on Aug. 2. 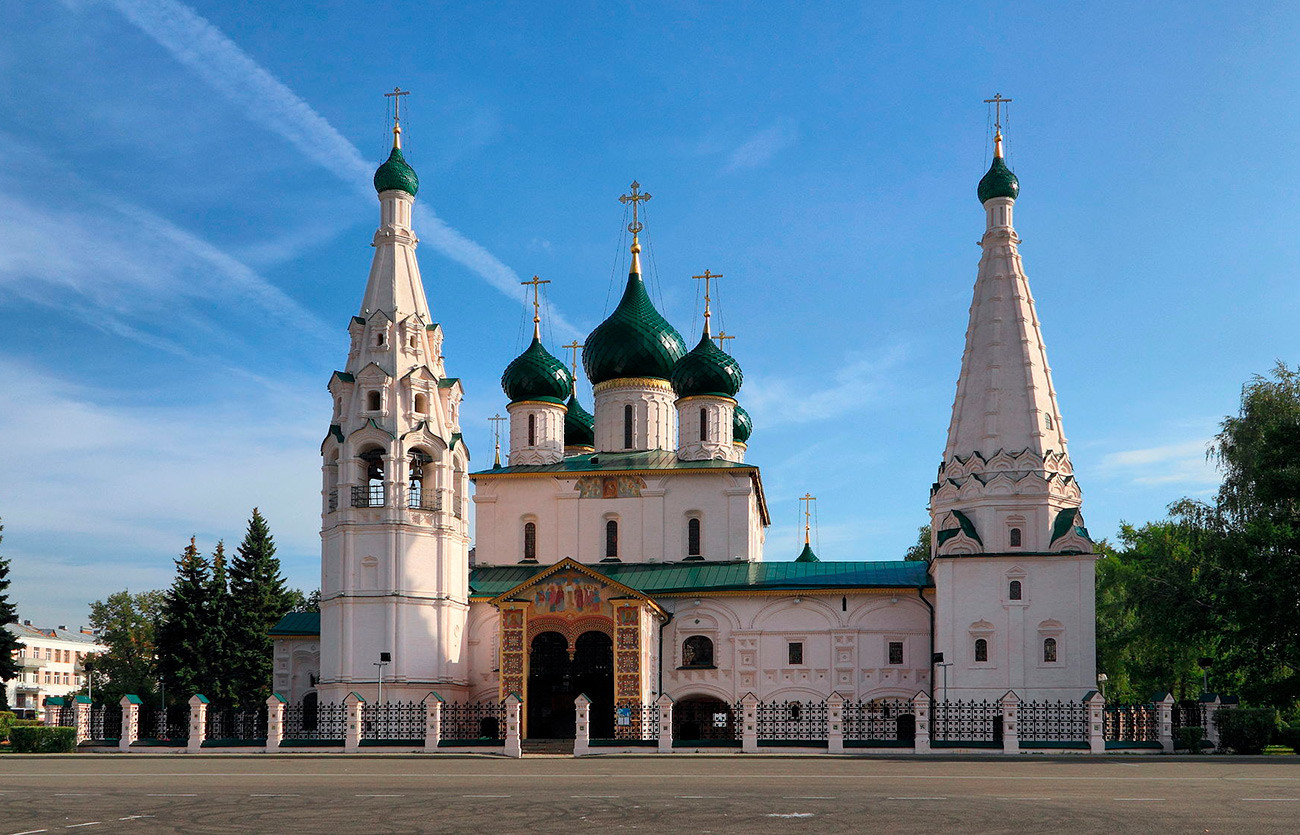 The Church of Elijah the Prophet

The present church was built much later, in the 17th century, and is a striking example of the church architecture of that time and the dominant trend – the Yaroslavl school. A distinctive feature is the tall conical bell tower and the high basement level on which the church itself stands.

Today, this building is the city’s metropolitan cathedral, yet it is a replica, built to mark the 1,000th anniversary of Yaroslavl in 2010. But it was on this site that the first stone church in Yaroslavl was founded back in 1215. The entire surrounding territory, which resembles a triangle, is known as Rubleny Gorod (Chopped Town), and was originally the administrative center of the city. 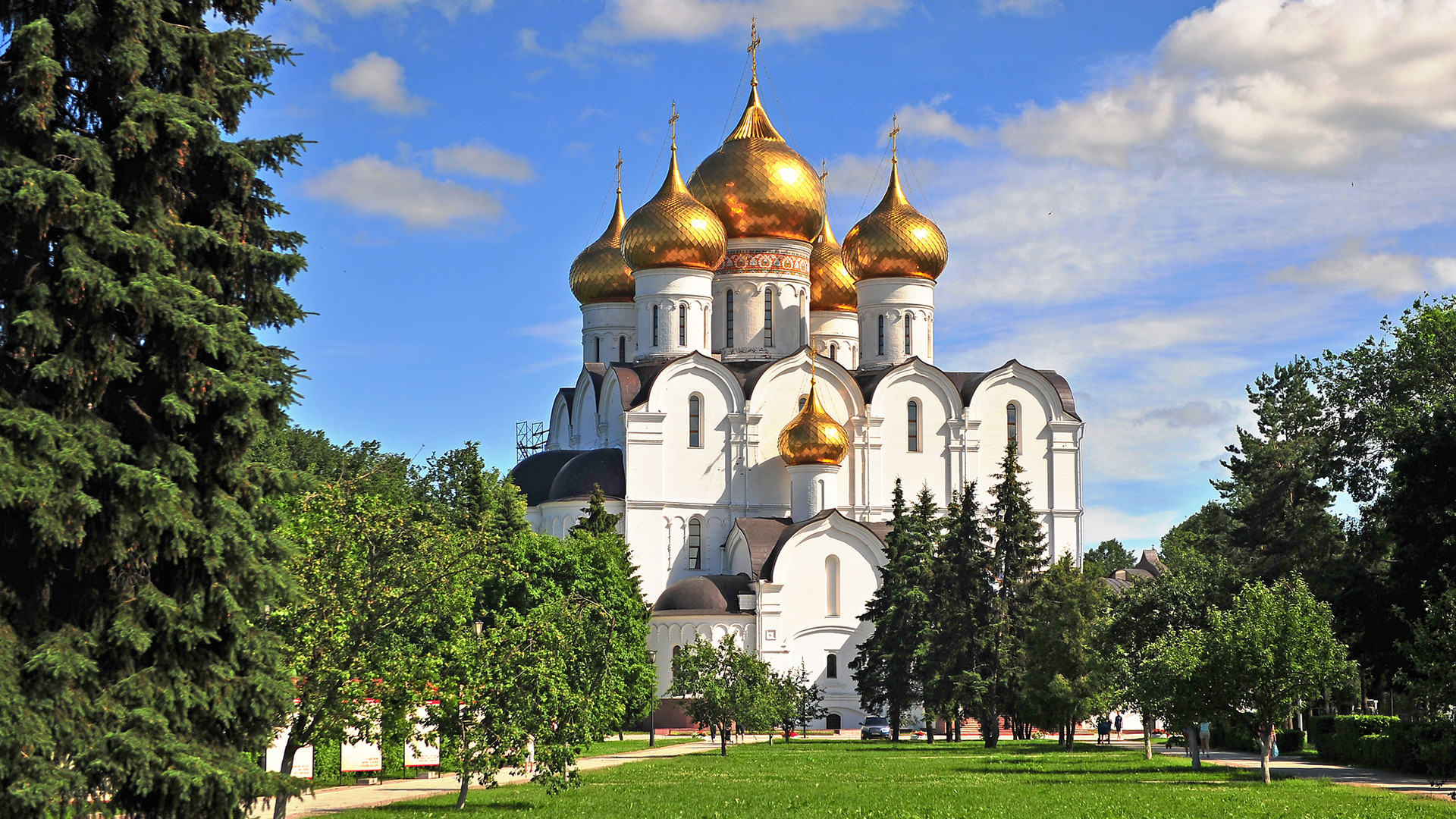 Over the centuries, the cathedral burned down and was rebuilt several times. During the Soviet era, it was even demolished to make way for a park.

What to see around Yaroslavl

Besides the other Golden Ring cities, including Rostov Veliky, Pereslavl-Zalessky, and Kostroma (which we will write about separately), around Yaroslavl there are several fascinating places that would be worthy of the name Little Golden (or at least Silver) Ring. 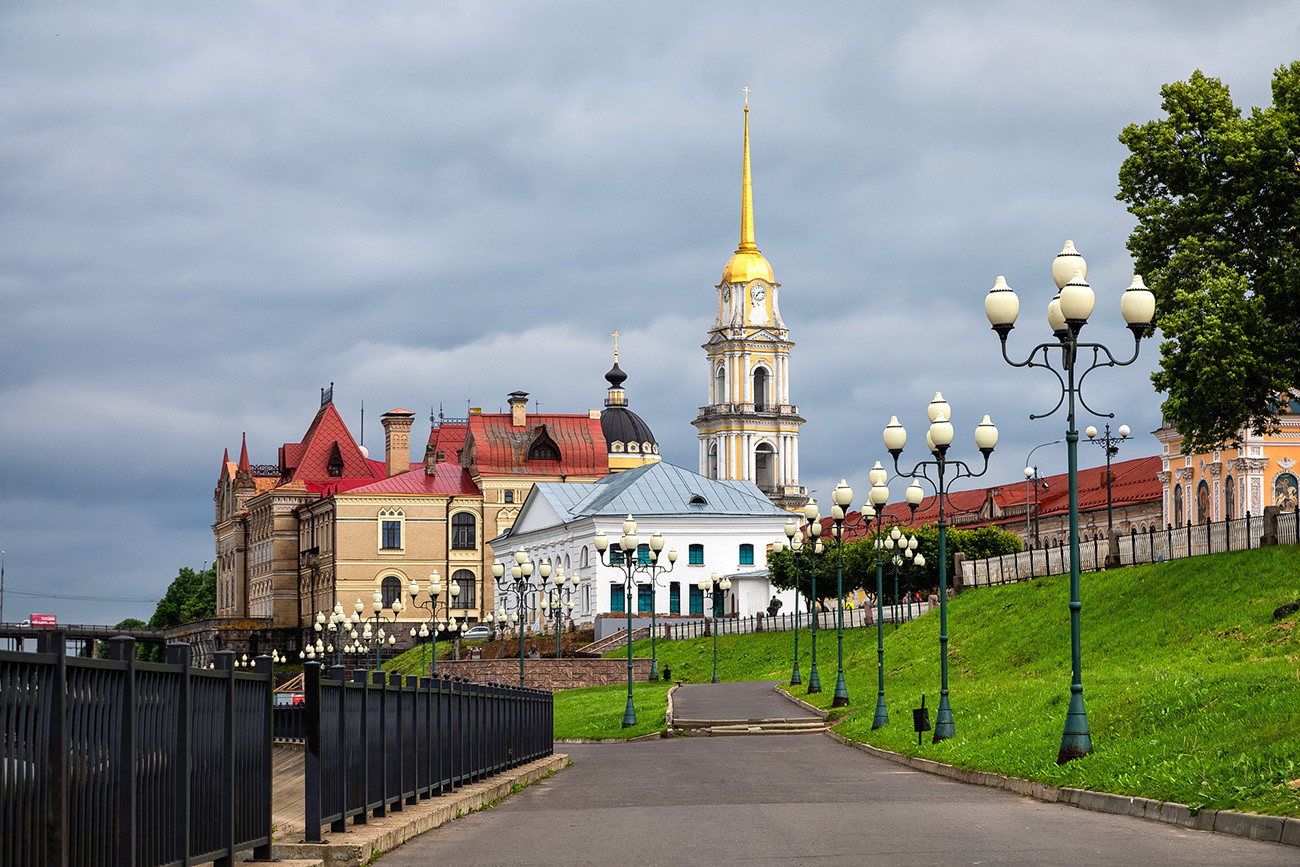 First off, Rybinsk deserves special attention for its location on the shore of Rybinsk Reservoir, which is so large it is known colloquially as a sea. Here you can feel the atmosphere of the wealthy merchant lifestyle, since Rybinsk was once a trading hub for fish sellers (the city’s name is derived from ryba, meaning “fish”). Unsurprisingly, there is a Rybinsk Fish Museum. Today, the historical center has been restored – there is a beautiful promenade and a delightful Red Square, which, despite the Lenin monument, smacks of a pretty European provincial town.

Two interesting stories are linked to Rybinsk. Did you know that the famous Alfred Nobel, the inventor of dynamite and the founder of the Nobel Prize, actually came from a Russian-Swedish family of entrepreneurs? His father and grandfather both did business in Russia, and he himself with his brothers founded an oil shipyard in, yes, Rybinsk. The city could not fail to dedicate a museum to the noble Nobel brothers.

Rybinsk also spawned another pair of world-famous brothers by the name of Schenk, who went on to found Hollywood! 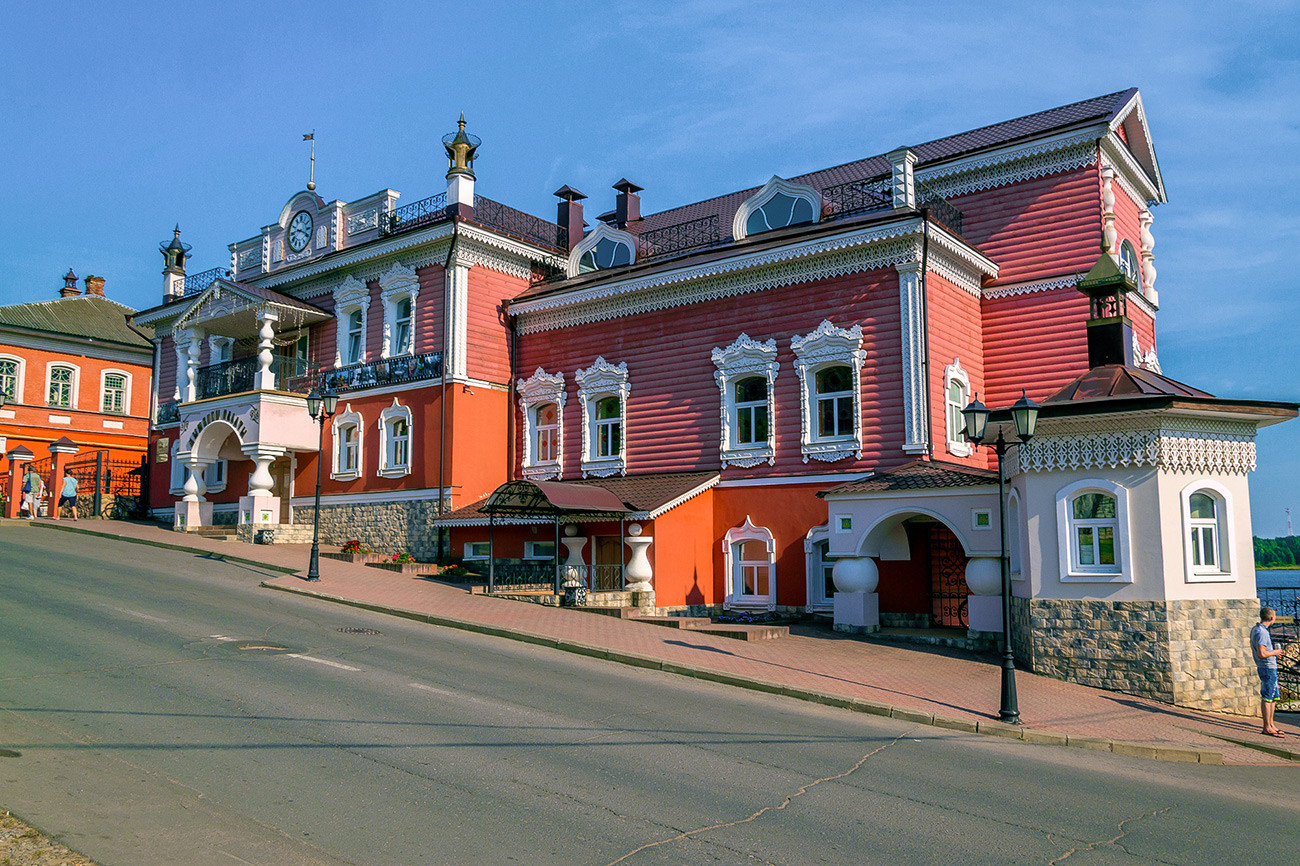 The Mouse House in Myshkin

Be sure to travel by ferry across the Volga to the town of Myshkin. This is a cute little place whose center is made of wood. Locals do a roaring trade off the back of the city’s name (which comes from the Russian word for “mouse”), and mice (mostly of the toy variety) are everywhere. There is a special museum dedicated to mice, and mousy souvenirs of all flavors are sold at every step. Locals believe that if you buy a small clay mouse and put it in your wallet, it will make you rich (at least according to sellers of small clay mice). Also on the main square, where the large Volga cruise liners dock, you can buy enough fresh smoked fish to last a lifetime. 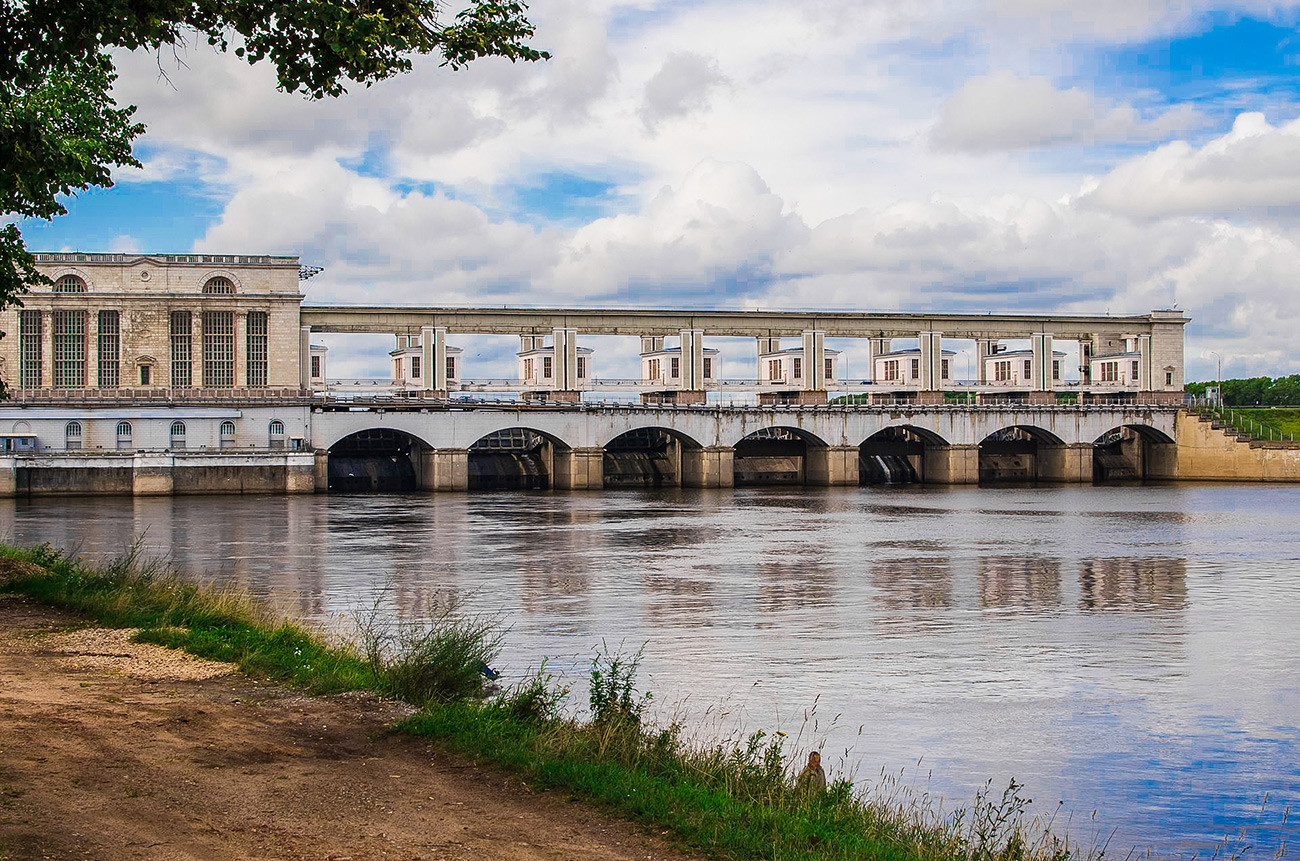 You can continue your circular route via Uglich (if traveling by river, you will go through the sluice gates and under the beautiful bridge of Uglich hydropower station; but you can’t stop there for a photo, so just enjoy the view). 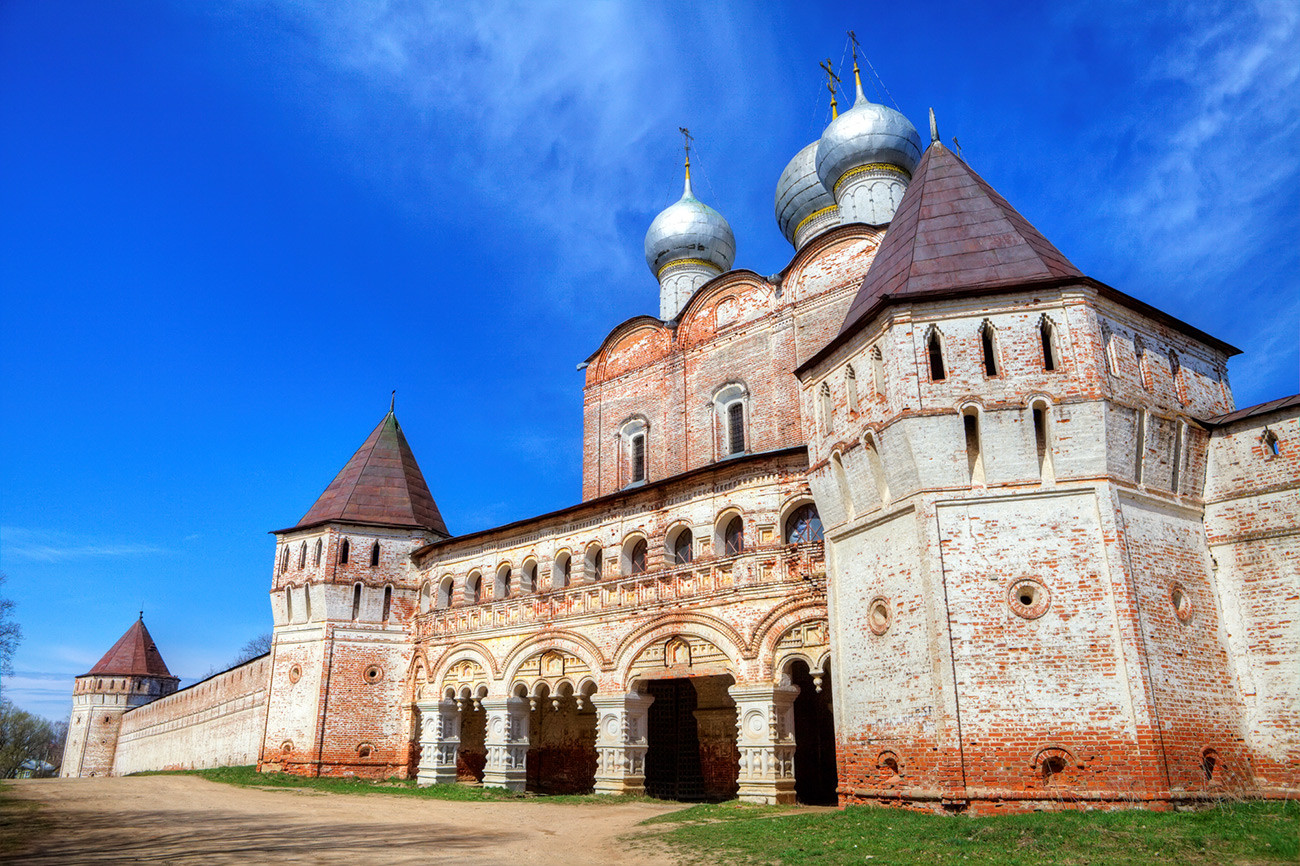 Uglich is the topic of a separate article, but right on the road to Yaroslavl through Rostov Veliky stands the incredibly beautiful Borisoglebsky Monastery, founded back in 1363. Few tourists make it here, so you can enjoy a quiet stroll around this peaceful yet magnificent monastery – and listen to the bell-ringing.