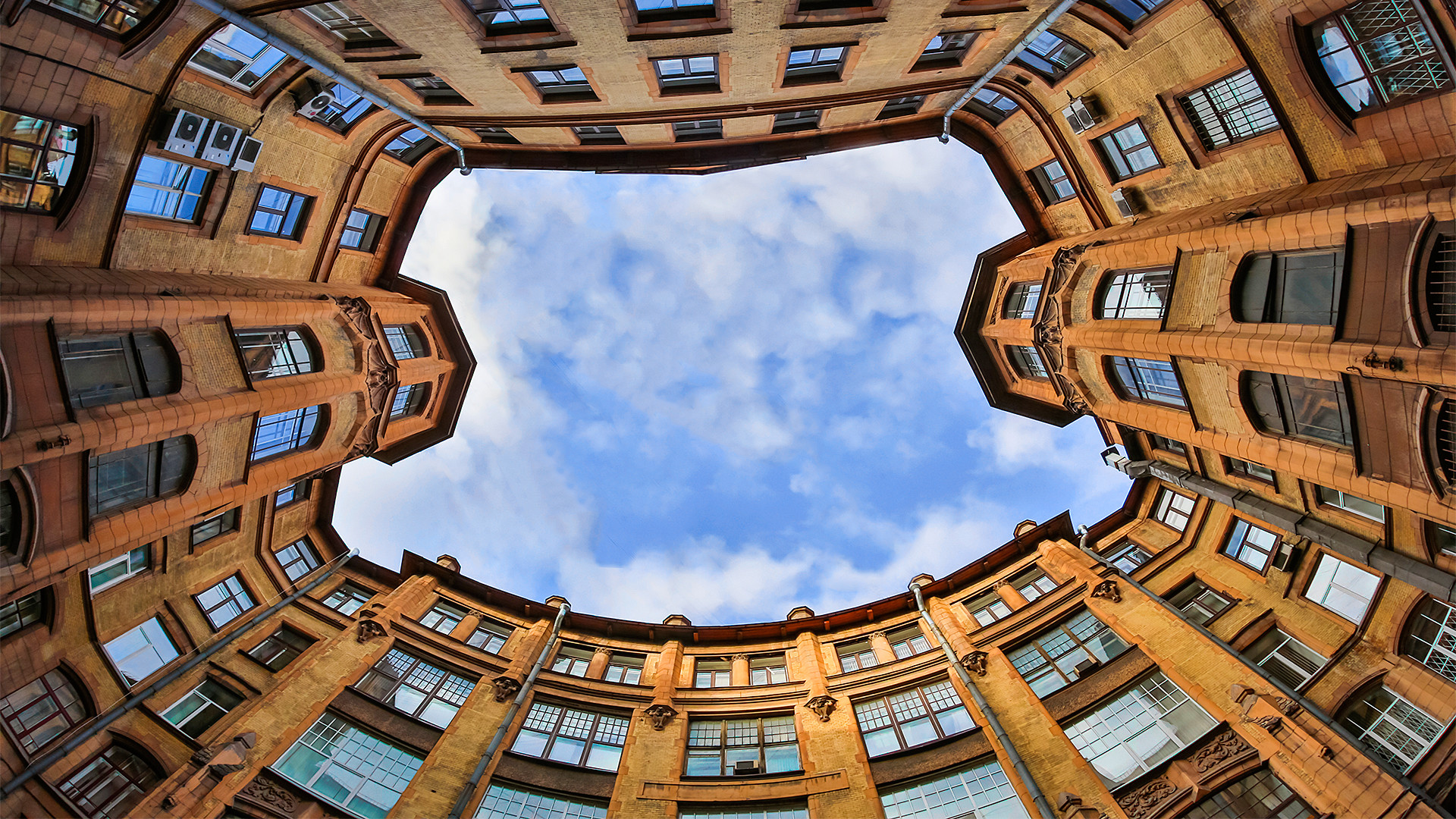 Legion Media
St. Petersburg is famous for its yards that often form wells or hide some secrets inside. 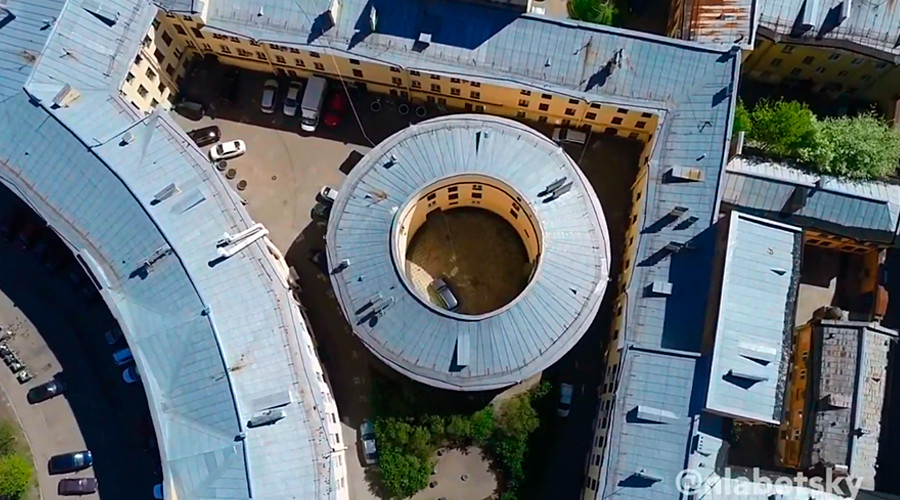 The round house in a big yard.

A beautiful semi-circle house at Naberezhnaya reki Fontanki, 92 attracts attention itself, but it hides its main architectural miracle within the yard. The fact is that, in the past, it was a house of flats for rent and the owners didn’t like that its big yard stood unused. An architect named Iosif Charlemagne then found a way to economise space and built a round three-storey house, which also had apartments for rent inside. Its yard forms an ideal ring that lets a lot of light in. Now, it’s one of the oldest buildings in St. Petersburg. The round house is also famous for its renters: the parents of great Russian poet Alexander Pushkin lived in one of the apartments here for seven years. Nowadays, the apartments have been repurposed and the house is occupied by different organisations. 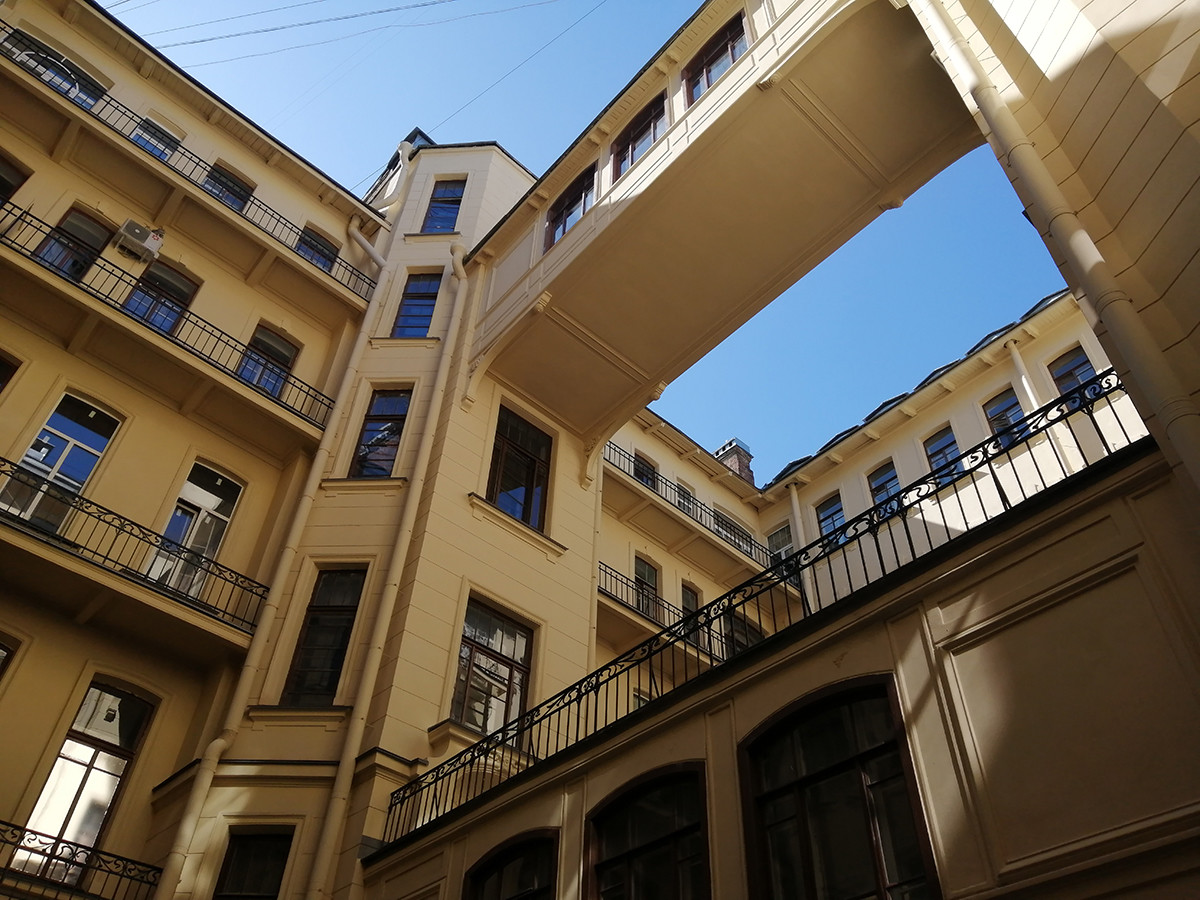 The galleries in the yard of Bak's House.

The rental house at Kirochnaya ulitsa, 24 was built by architect Boris Girshovich in 1905 in Art Nouveau style. The owner was a Jewish engineer named Yulian Bak. The house has a complex of yards and one of them is particularly interesting. It also has special galleries on the second and the fifth floors. They connect the main building with an outhouse. The galleries let the inhabitants of the outhouse enter their apartments from Kirochnaya ulitsa. This was considered more prestigious than entering from the yard and also made the rent prices higher.

It is remarkable that Yulian Bak wasn’t just an engineer, but also the founder and the publisher of Retch (“Speech”), the newspaper of the Kadety (legal Russian political party of constitutional democrats). The main office of Retch occupied one of the apartments in Bak’s house. 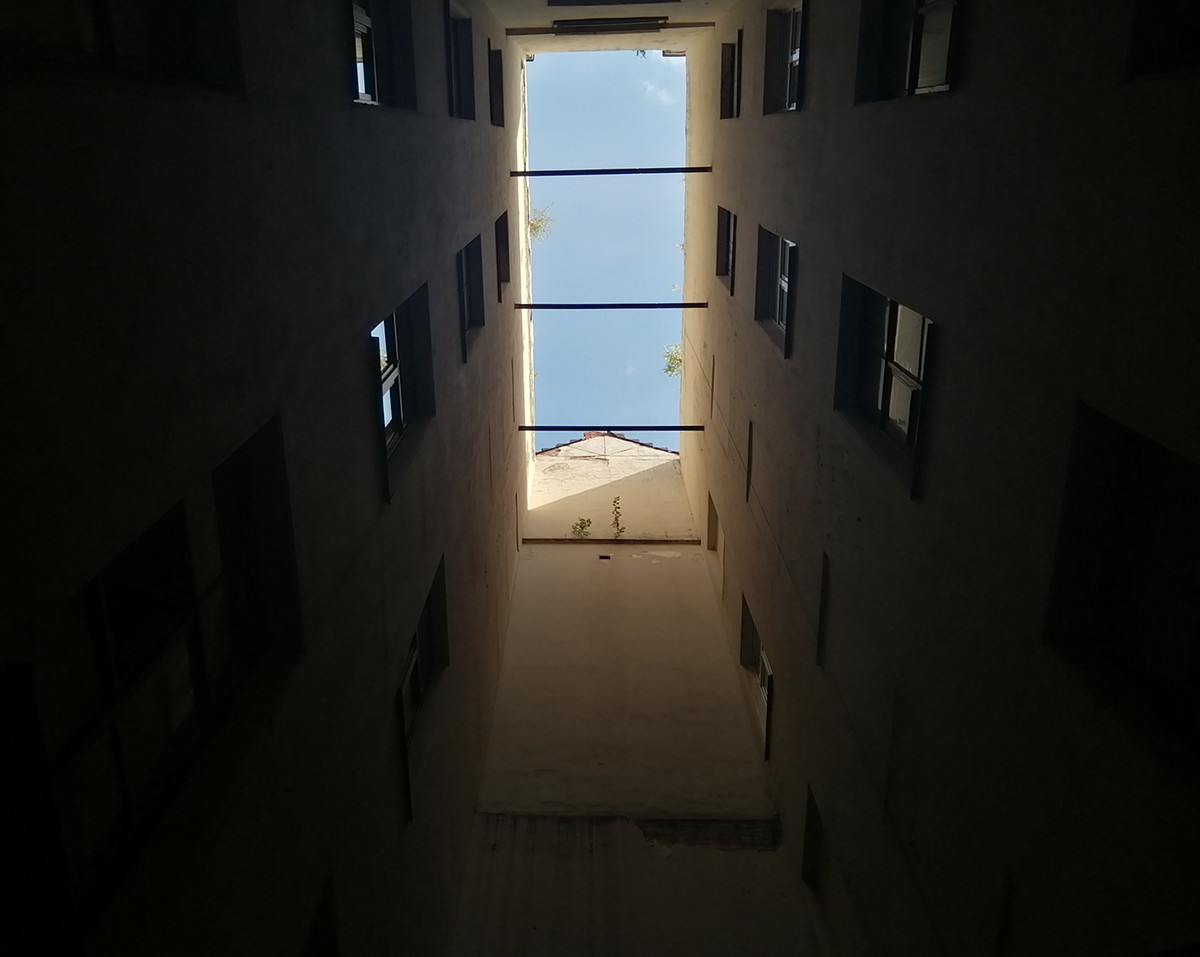 A piece of sky seen from the bottom of the ‘Yard of spirits’.

St. Petersburg’s Vasilyevsky Island also hides a mysterious place. This is the ‘Yard of spirits’, one of the yards at 4-ya liniya V. O., 5. The legend says the yard got its name thanks to one of the residents of the house, Russian painter Nicholas Roerich, who was famous for his mysticism. This is a classical well-yard, it’s sized like a small room and has a really gloomy appearance. Earlier, it had a metal net above it that made the place even more depressing. Now, only a few iron frames are left.

The ‘Yard of spirits’ is considered a place for making wishes. One has to stand in the middle looking from the bottom of the well at that little piece of sky above and address the wish to the spirits. The fact is that coming from the street, people get into the main yard, and to make sure the wish comes true, the visitors have to find the ‘Yard of spirits’ themselves. A hint: one of the doors in the main yard leads there. 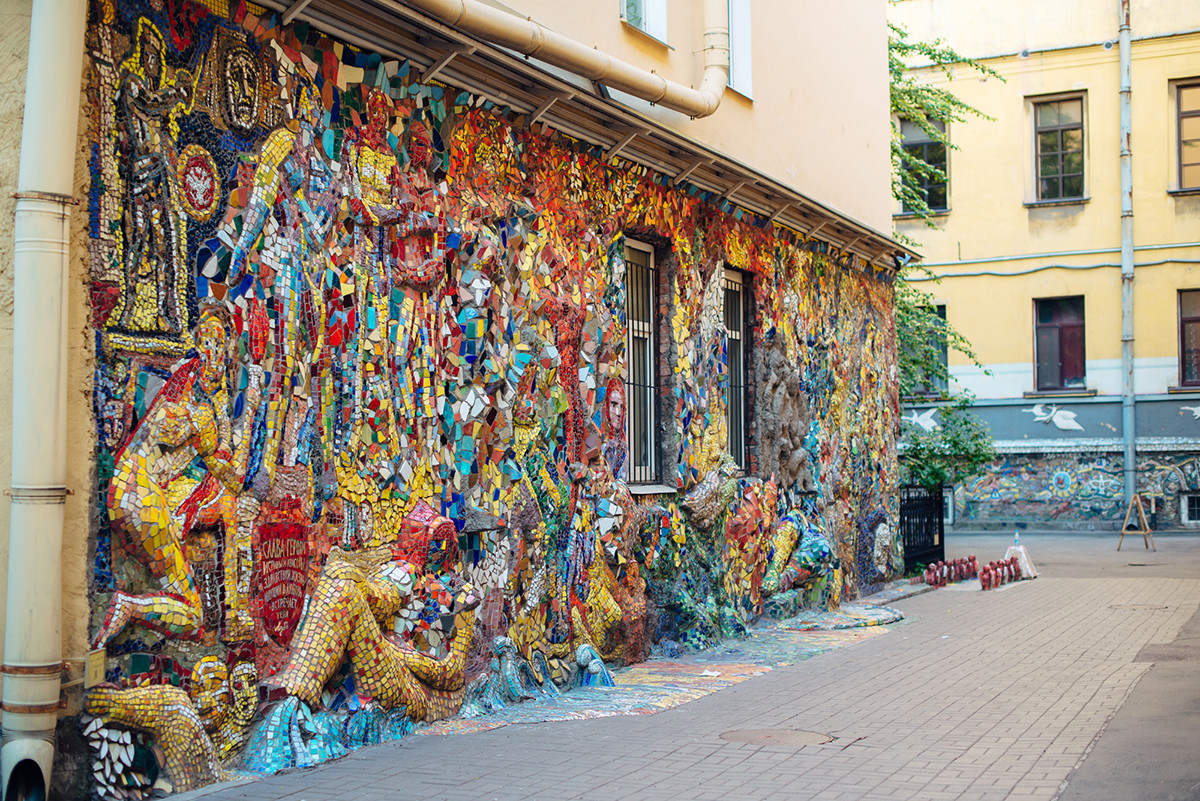 A part of mosaic with bas-reliefs by Vladimir Lubenko in the yard.

The yard at Ulitsa Chaykovskogo, 2/7 isn’t similar to any other in St. Petersburg. It’s an open-air museum of mosaic works. A Russian artist Vladimir Lubenko started to decorate this yard in 1984 and his apprentices then joined him. There are lots of sculptures and bas-reliefs: angels, lions, various people, etc. Among the art-objects there is also a kids’ playground and a fountain with sculptures depicting a mother and a child. The vivid harmony of colors apparently cheers visitors up. 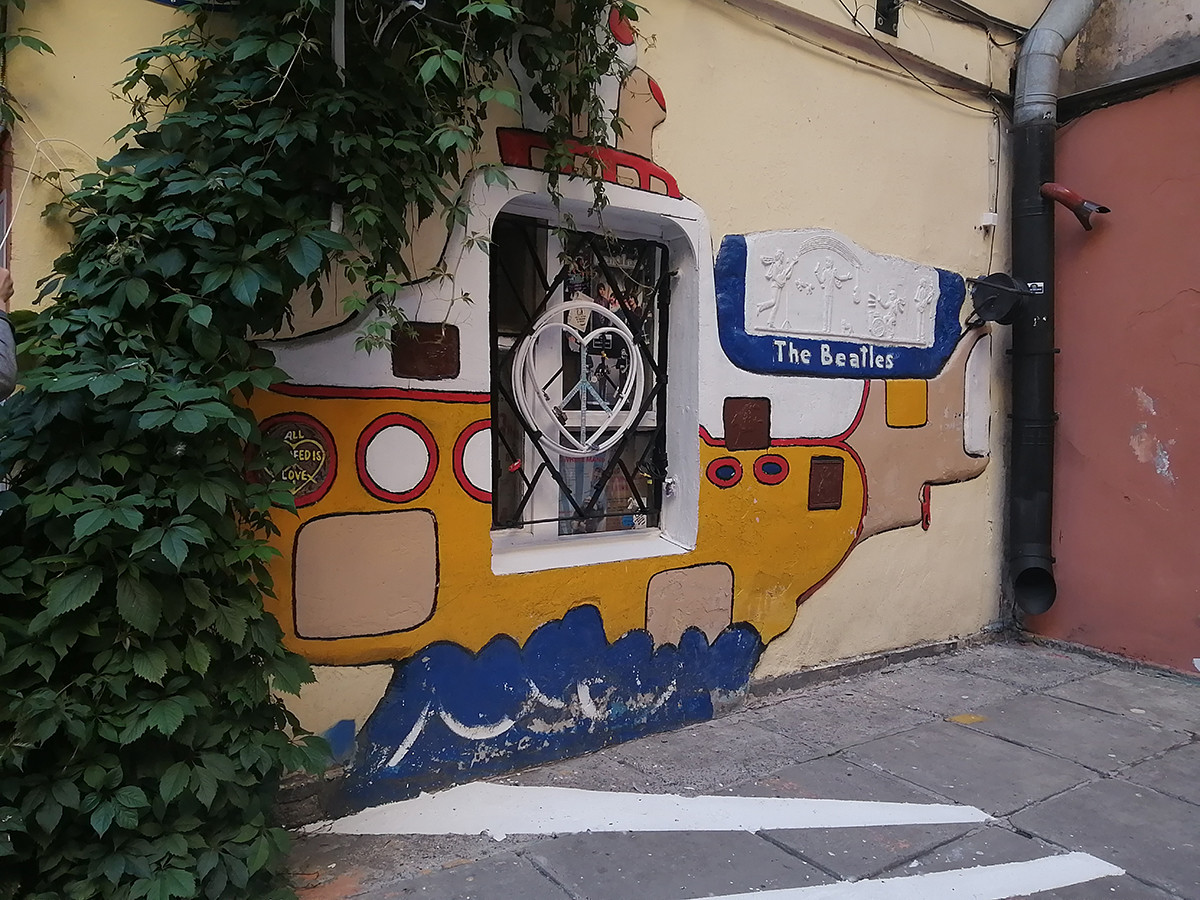 The bas-relief of the ‘Yellow Submarine’.

The name of a contemporary art center ‘Pushkinskaya, 10’ shouldn’t confuse you: the entrance is actually through the yard at Ligovsky Prospect, 53. This yard is a place for ‘The Beatles’ fans. There are two unofficial streets dedicated to the famous quartet. The first one, ‘Ulitsa Johna Lennona’ (“John Lennon Street”) was created by artist Kolya Vasin in 1992. At first, he wanted Ulitsa Marata to be renamed in honour of John Lennon, but city authorities refused , so Vasin ended up “making” one in this yard. His idea was that the “street” connected the ground and the sky, so the arrow on the street sign is pointing upwards. The second street was festively opened there in 2019 and was named ‘Abbey RoadЪ’. The letter ‘Ъ’ ('hard sign') stands for difference with the original.

In this yard, you can find graffiti with ‘The Beatles’ silhouettes from the ‘Abbey Road’ album cover. Near it, there are also five bas-reliefs: four of them portray the quartet, while the fifth one depicts the famous ‘Yellow Submarine’. 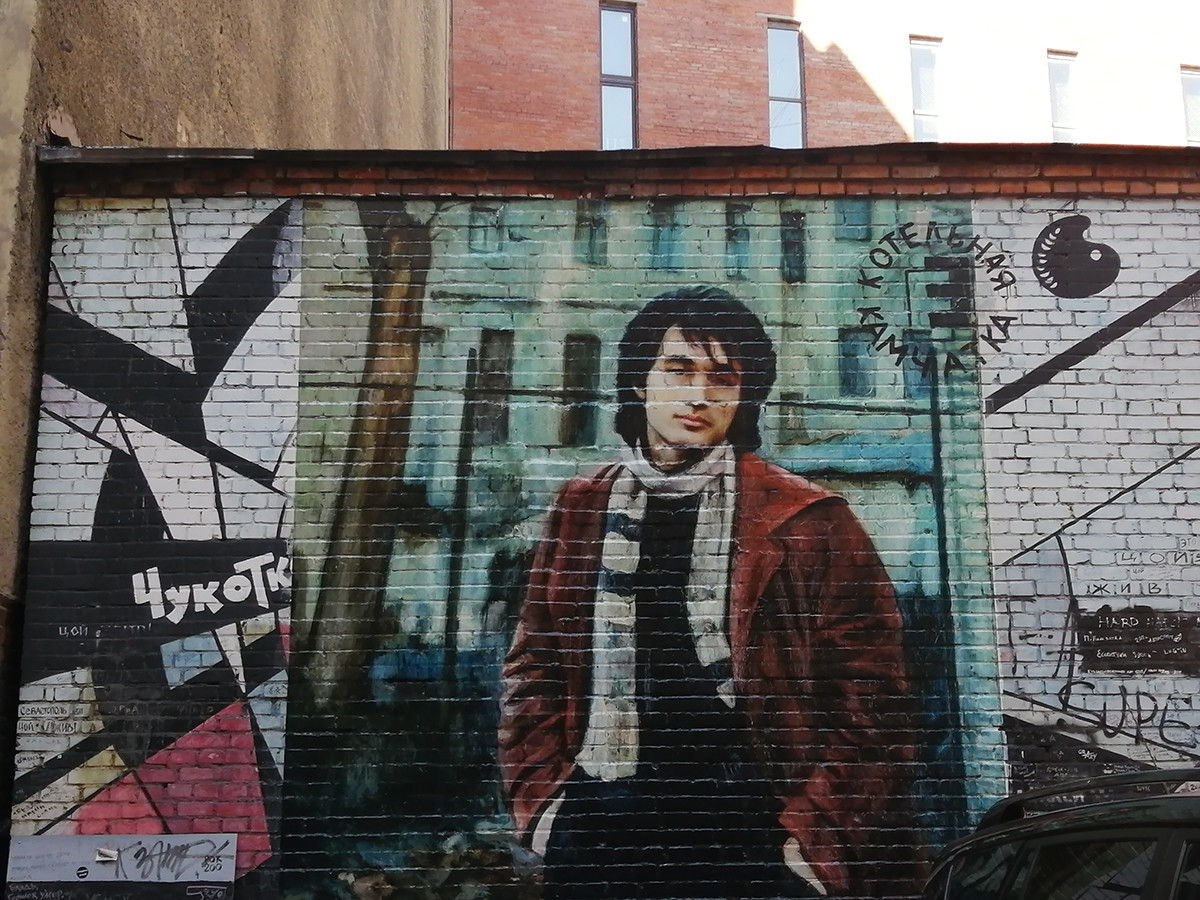 The portrait of Viktor Tsoi in the yard of ‘Kamchatka.'

‘Kamchatka’ is a demotic name of a boiler-room that was located in a cellar of a house at Ulitsa Blokhina, 15. Earlier, many buildings in St. Petersburg used to have such boiler-rooms. This one is famous because Victor Tsoi, a Soviet rock musician and frontman of the popular rock band ‘Kino’ (“Cinema”), worked there as a stoker in the 1980s. The entrance is through the yard, which commemorates Tsoi: there is a memorial board, a painted portrait and lots of graffiti works dedicated to him. Fans of ‘Kino’ often lay flowers by the memorial board. The painted portrait is based on a photo taken during the period of Tsoi’s work at ‘Kamchatka’.

The boiler-room was in operation until 2000, when the house got equipped with central heating. In 2003, the former boiler-room was turned into a club and museum. ‘Kino’ songs are playing there all the time and in the evenings rock concerts are held. The coal boiler is still there and the atmosphere is kept from the times of Tsoi.