St. Nicholas Monastery in the Urals and the 'people’s saint' 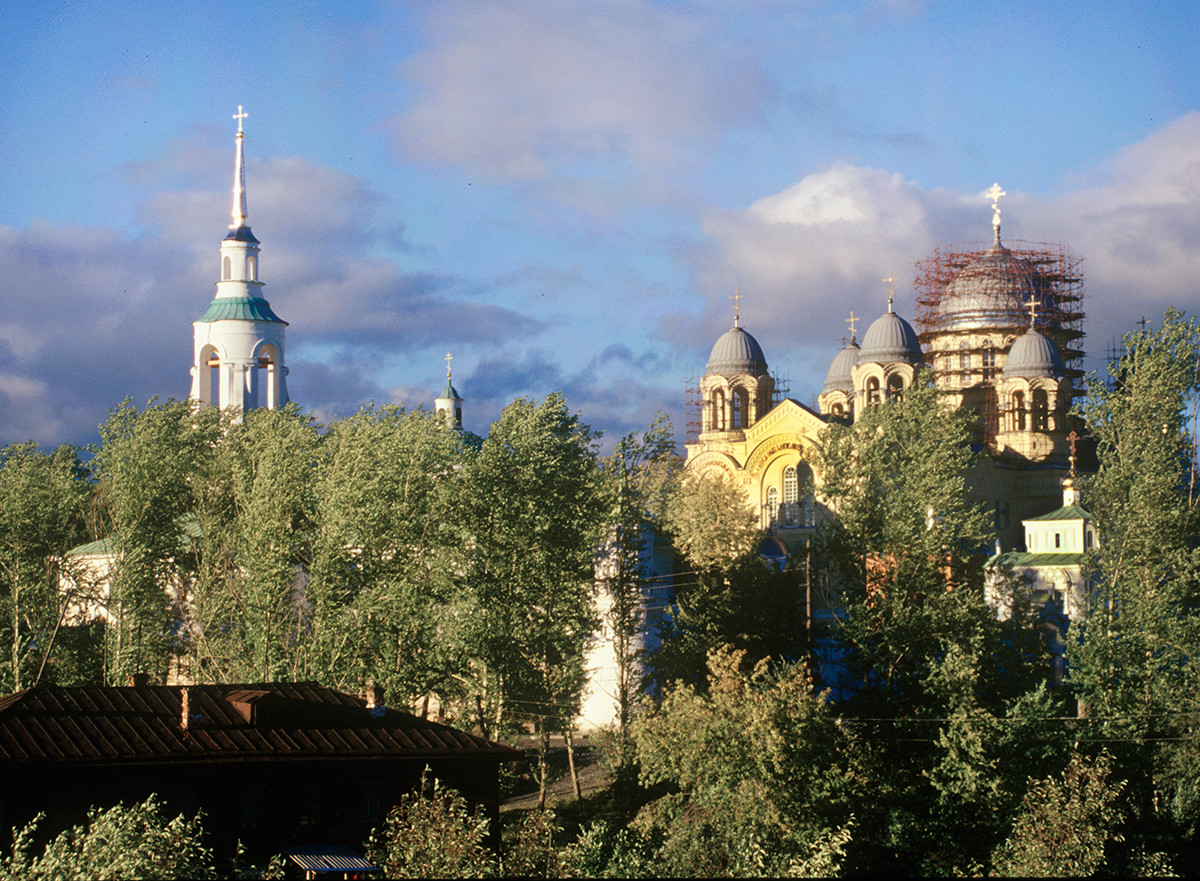 For much of the 17th and 18th centuries, the small town of Verkhoturye was the primary point of transit from European Russia across the Ural Mountains into the vast Siberian domains. Located on the upper reaches of the Tura River some 180 miles north of Ekaterinburg, the small town of Verkhoturye (pronounced “verkho-tUr-ye”) played a critical role in extending Russian authority to the east during that period.

In the summer of 1909, Russian chemist and photographer Sergei Prokudin-Gorsky (see box text below) visted Verkhoturye on the first of his journeys to the Ural Mountains. My first visit to this area occurred nine decades later, in the late summer of 1999. Unfortunately, the original glass negatives of his photographs from this visit have not been preserved, but monochrome contact prints from his albums held at the Library of Congress allow us to see these remarkable images. 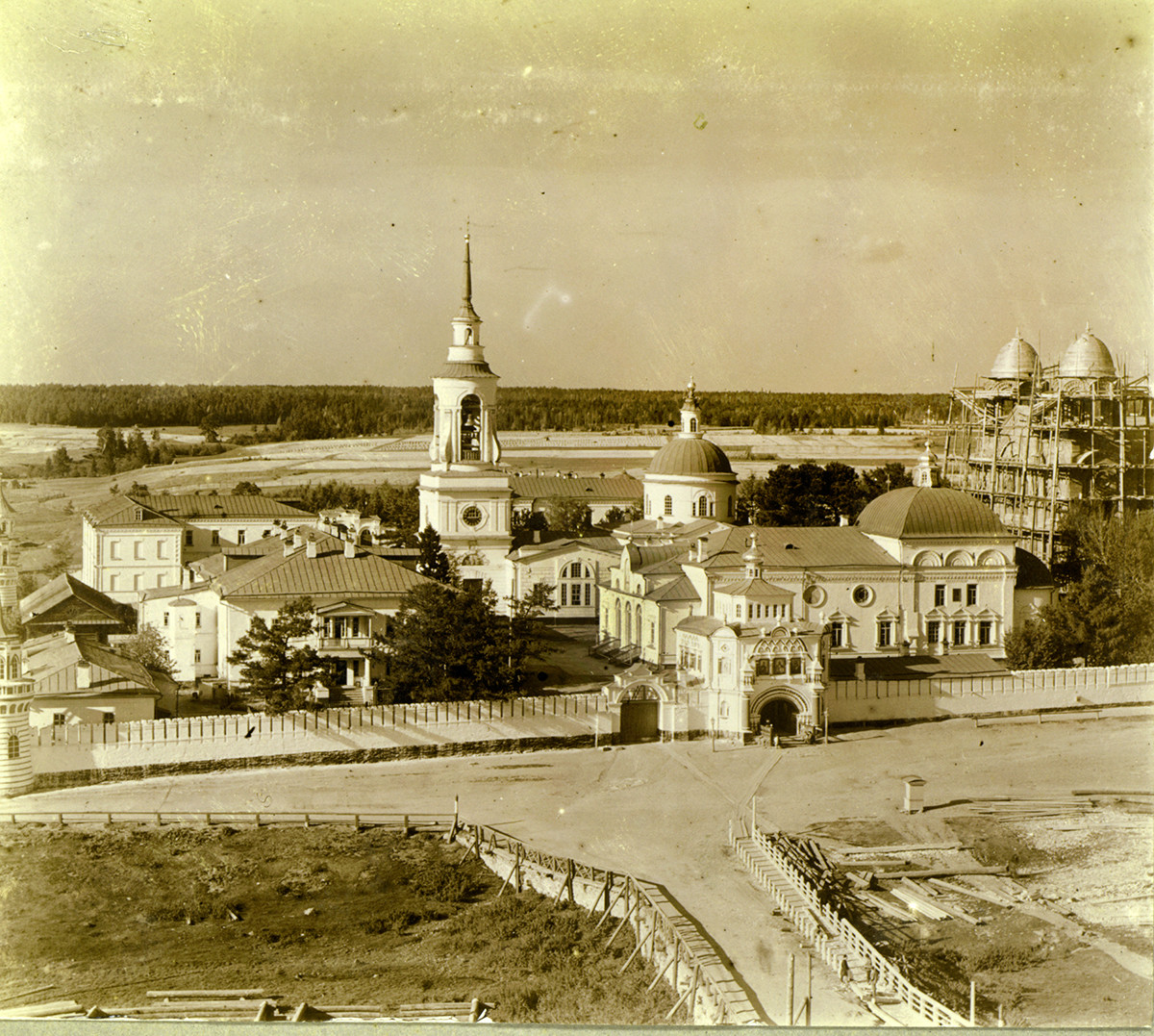 The Tura River is not large by Russian standards (about 600 miles long), yet it is an essential link from the eastern watershed of the Urals to the great Ob-Irtysh River basin in Siberia. With the founding of Tobolsk in 1585 on the Irtysh River, Russia had a strategic outpost in western Siberia. 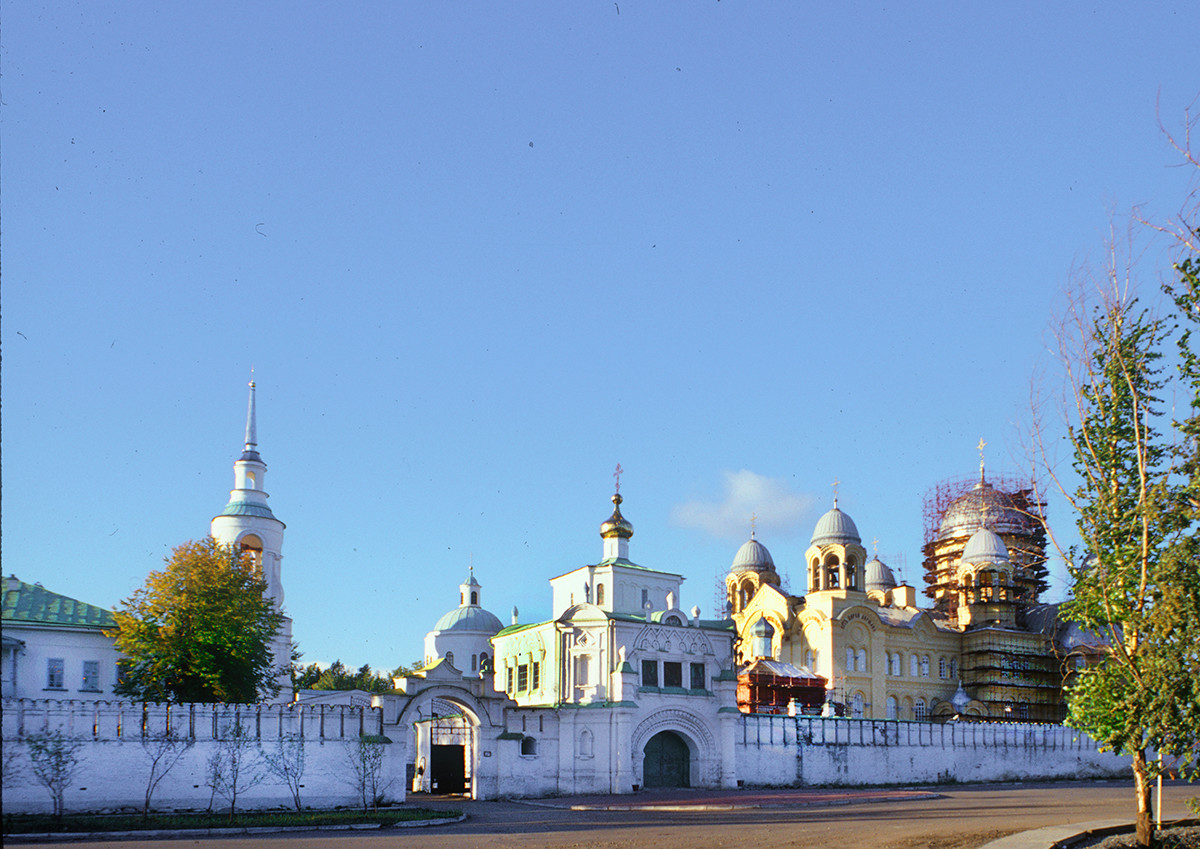 In 1595 Tsar Fyodor, son of Ivan the Terrible, announced a search for new paths to Siberia. The Tura, which flows into the Tobol River south of Tobolsk, proved the logical choice. Shortly thereafter Artemy Babinov, a free peasant from Solikamsk, blazed a trail across the Urals from Solikamsk to the Tura River.

Within a short period of two years, the almost 180-mile-long path became the major route that led to the new fortified settlement of Verkhoturye, founded in 1598. In the same year a log Church of the Trinity was built at the fort, one of the earliest churches in Russia’s Asian territory. 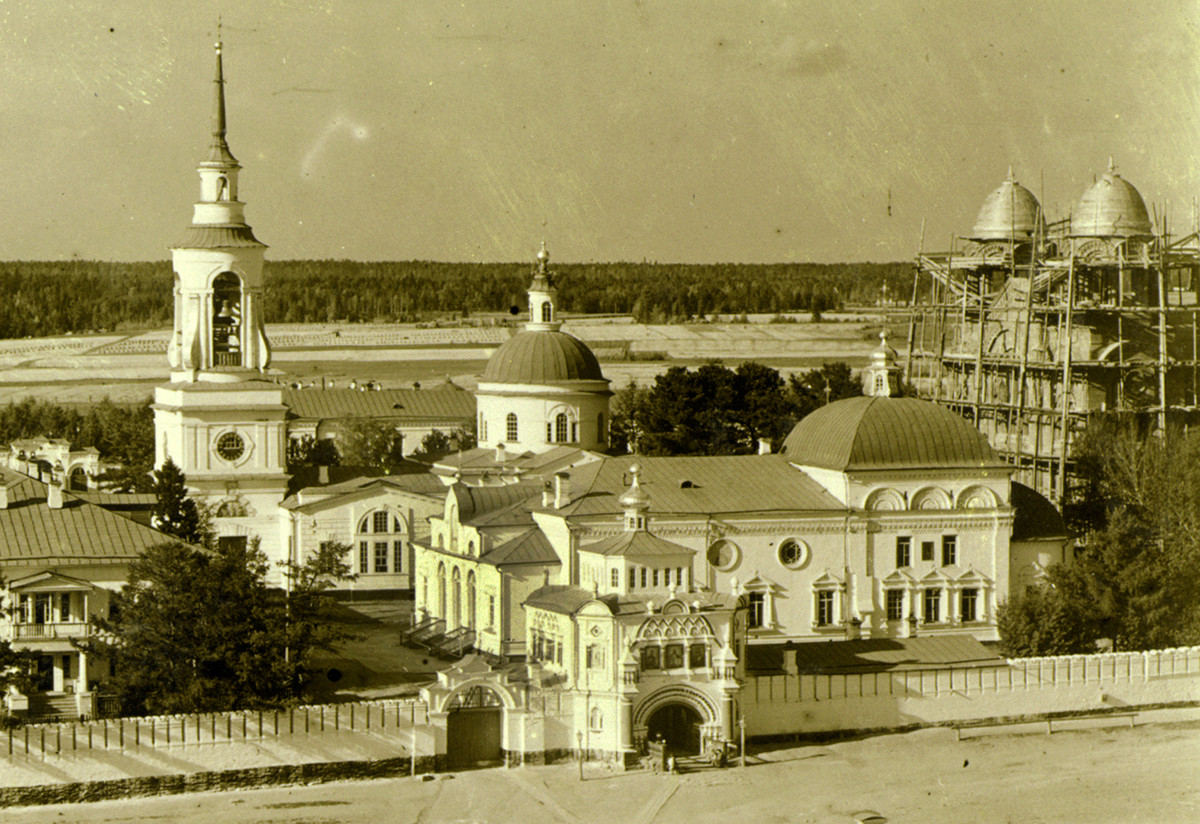 At the turn of the 17th century, Verkhoturye was designated the primary customs point for passage to Siberia. This tight control on movement to and from Siberia allowed the state to maintain its revenues through taxes on goods such as fur pelts—most especially the highly valued sable. Indeed, the Verkhoturye town crest, officially confirmed in 1783, depicts a standing black sable.

First monastery in the east

For the first 100 years of its existence, Verkhoturye consisted of log buildings, but the beginning of the 18th century witnessed the rebuilding in brick of the fortress, located above the Tura River on a massive outcropping named Trinity Rock after the Trinity Church. This central ensemble became a symbol of authority, with brick decoration reminiscent of the Moscow Kremlin. 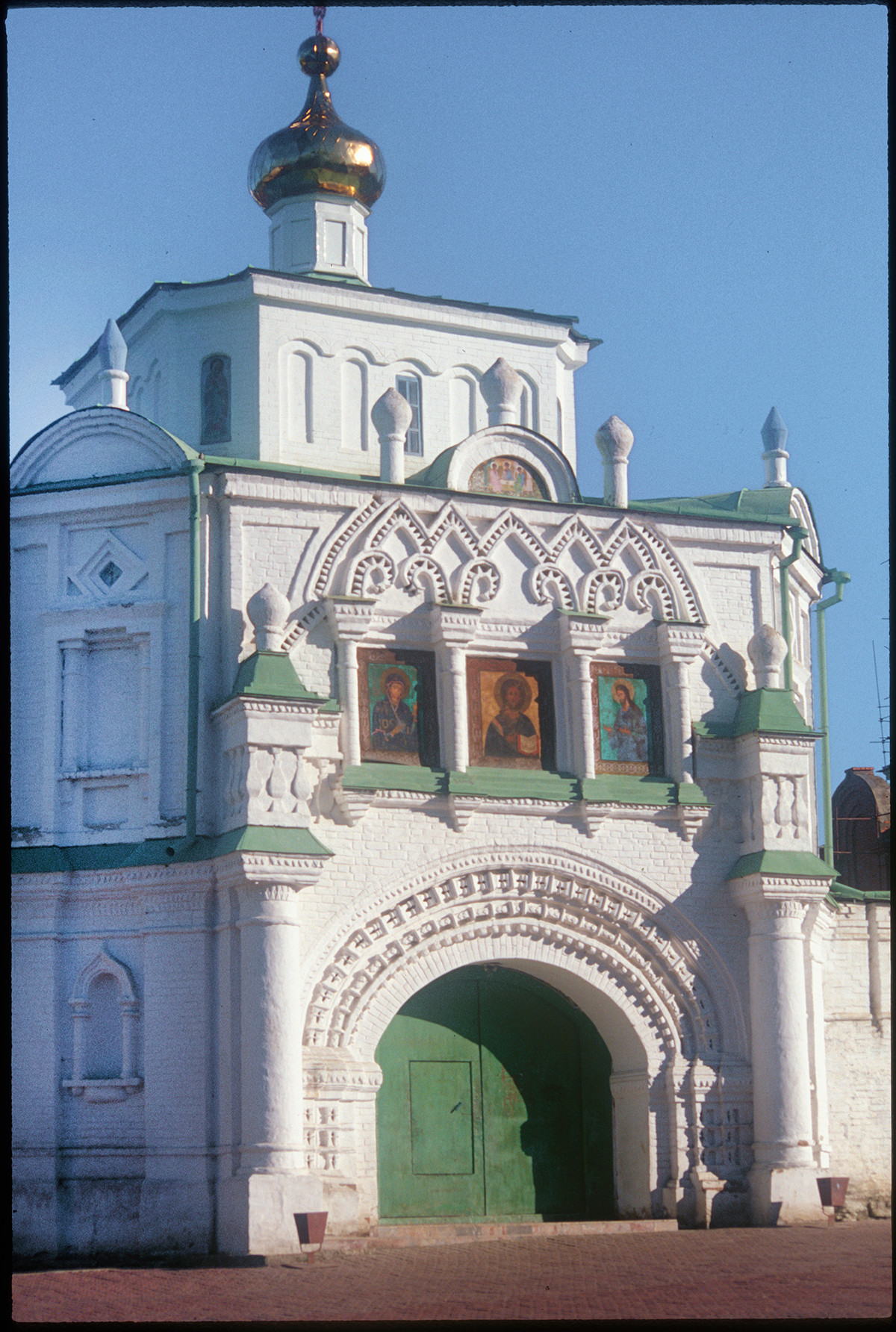 As Russian state institutions expanded into Siberia, so did the Orthodox Church, which symbolized Russia’s authority over this enormous territory. In 1604 – less than a decade after its founding – Verkhoturye gained the first monastery in Russia’s Asian territory. Dedicated to St. Nicholas, this monastery became a major point for missionary activity throughout Siberia.

Its founder was a monk named Jonah from Poshekhonye, who petitioned Moscow in 1602 for permission to establish a monastic community. With the onset of widespread social unrest in the “Time of Troubles,” nothing was done until Jonah made a plea directly to Tsar Boris Godunov. Approval was granted, and a log Church of St. Nicholas was erected in 1604. 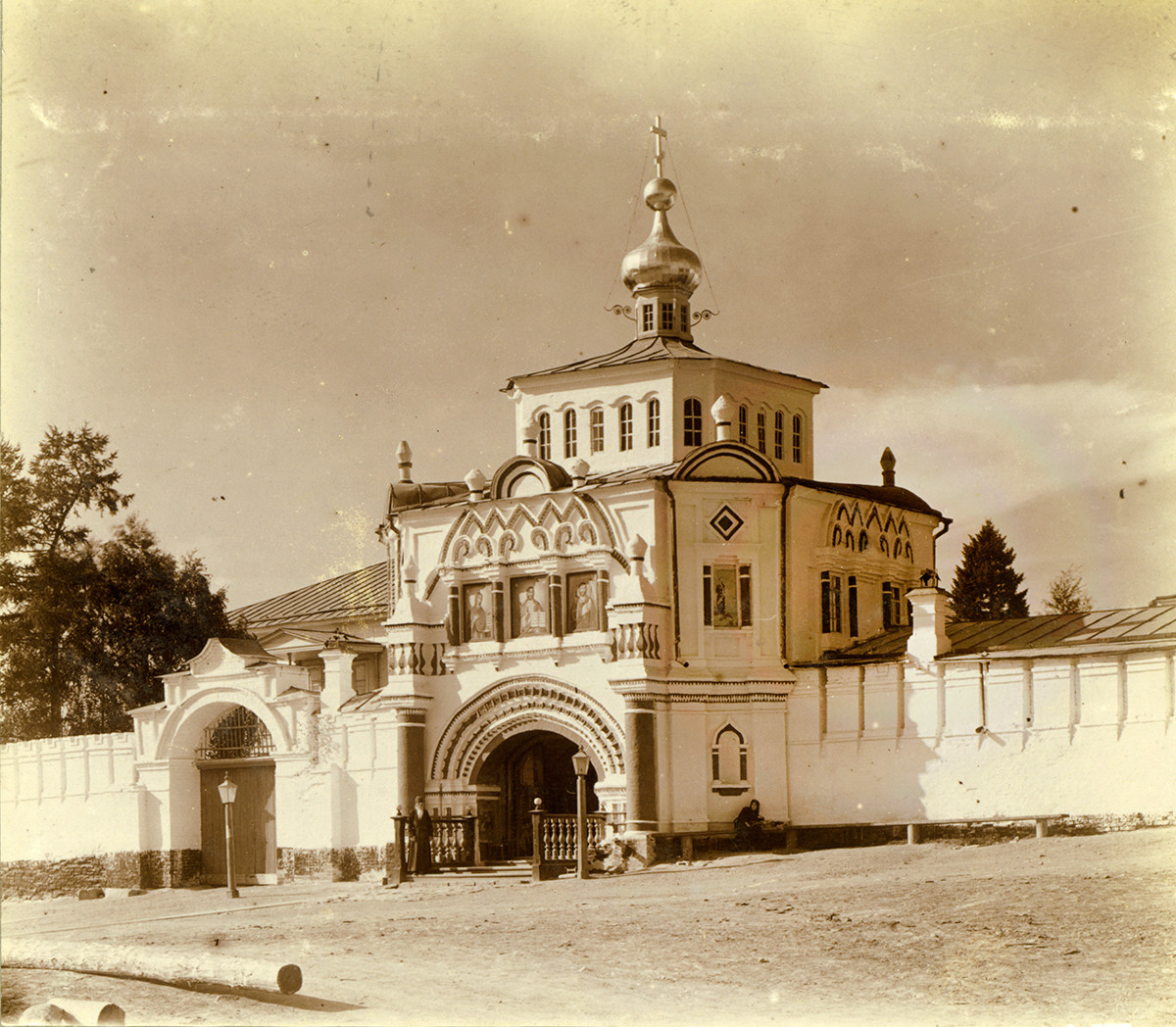 Little is known about the first century of the monastery’s existence, however, at the beginning of the 18th century, it achieved lasting fame for its association with a saintly ascetic known as Simeon of Verkhoturye (ca. 1607-1642). Simeon’s parents presumably perished during the Time of Troubles in central Russia, and in 1620 the youth fled to the Urals, where he found refuge in the forests near Verkhoturye. According to the account of his life compiled at the end of the 17th century, Simeon devoted himself to a prayerful, ascetic existence helping the impoverished peasants in neighboring villages. He also worked among the indigenous Mansi people. By the late 17th century, he was venerated as a protector of the entire Urals region – the Verkhoturye Miracle-Worker. 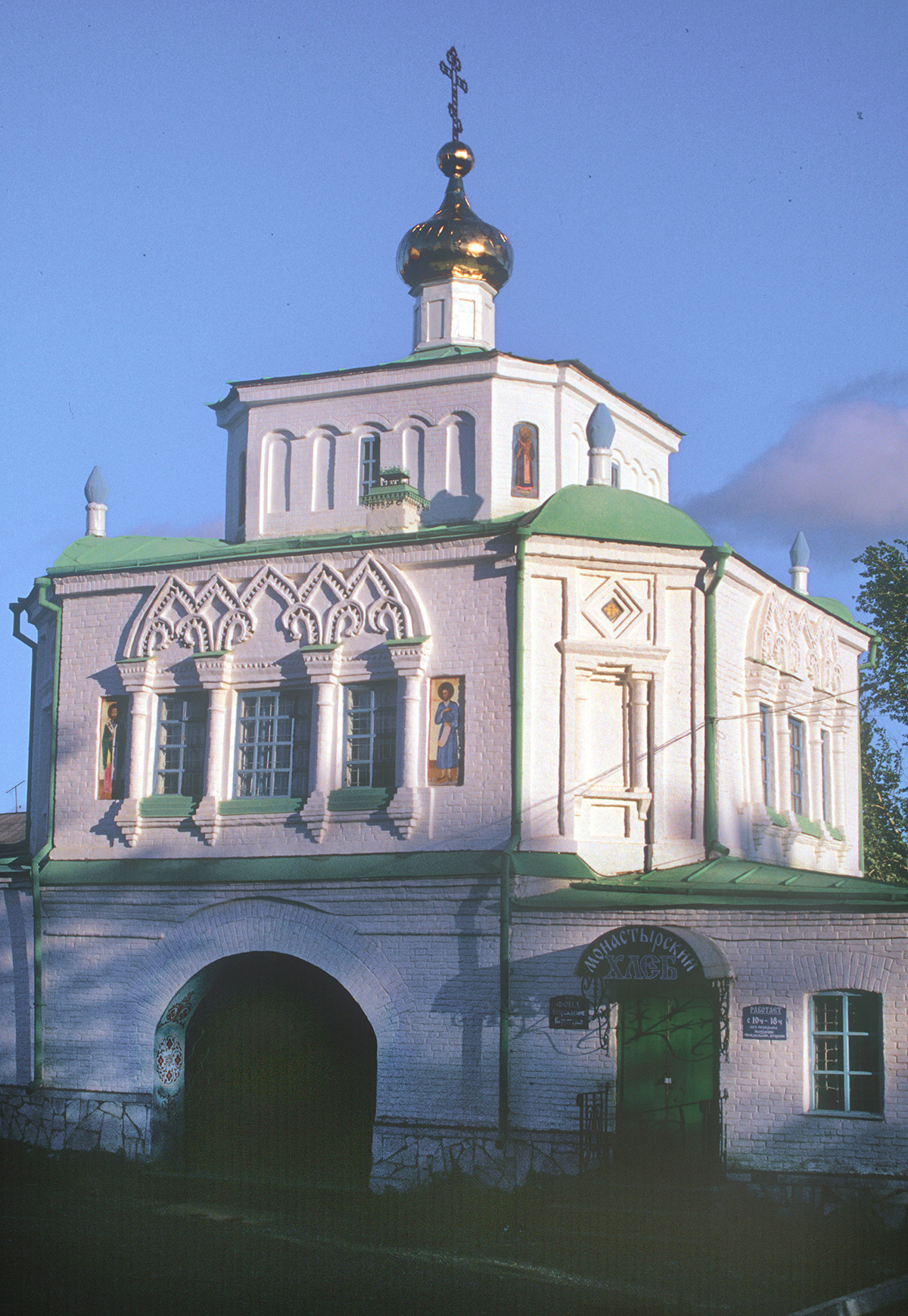 St. Simeon died in 1642 in the village of Merkushino, but in 1704, his remains – holy relics – were transferred to the St. Nicholas Monastery. The arrival of the relics marked a turning point in the monastery’s history. In 1712, work began on the reconstruction of the St. Nicholas Church in brick to provide a repository for St. Simeon’s relics. Lack of resources delayed its consecration until 1738. Frequently modified in the 19th century, the structure, visible in Prokudin-Gorsky’s photograph, was demolished in 1936. It was rebuilt in a smaller form in 1998.

The relics of St. Simeon, the “people’s saint”, attracted an overwhelming number of pilgrims to the St. Nicholas Church, and permission was granted to construct another shrine, dedicated to the Transfiguration of the Savior. Begun in 1821 and consecrated in 1834, the Transfiguration Cathedral was built in a neoclassical design by Peter Vasilyev, the official architect of Perm Province. During the 1930s, its large bell tower, visible in Prokudin-Gorsky’s view, was demolished, and the building was converted for use as a sports hall. The bell tower was rebuilt following the return of the church to active use in the 1990s. 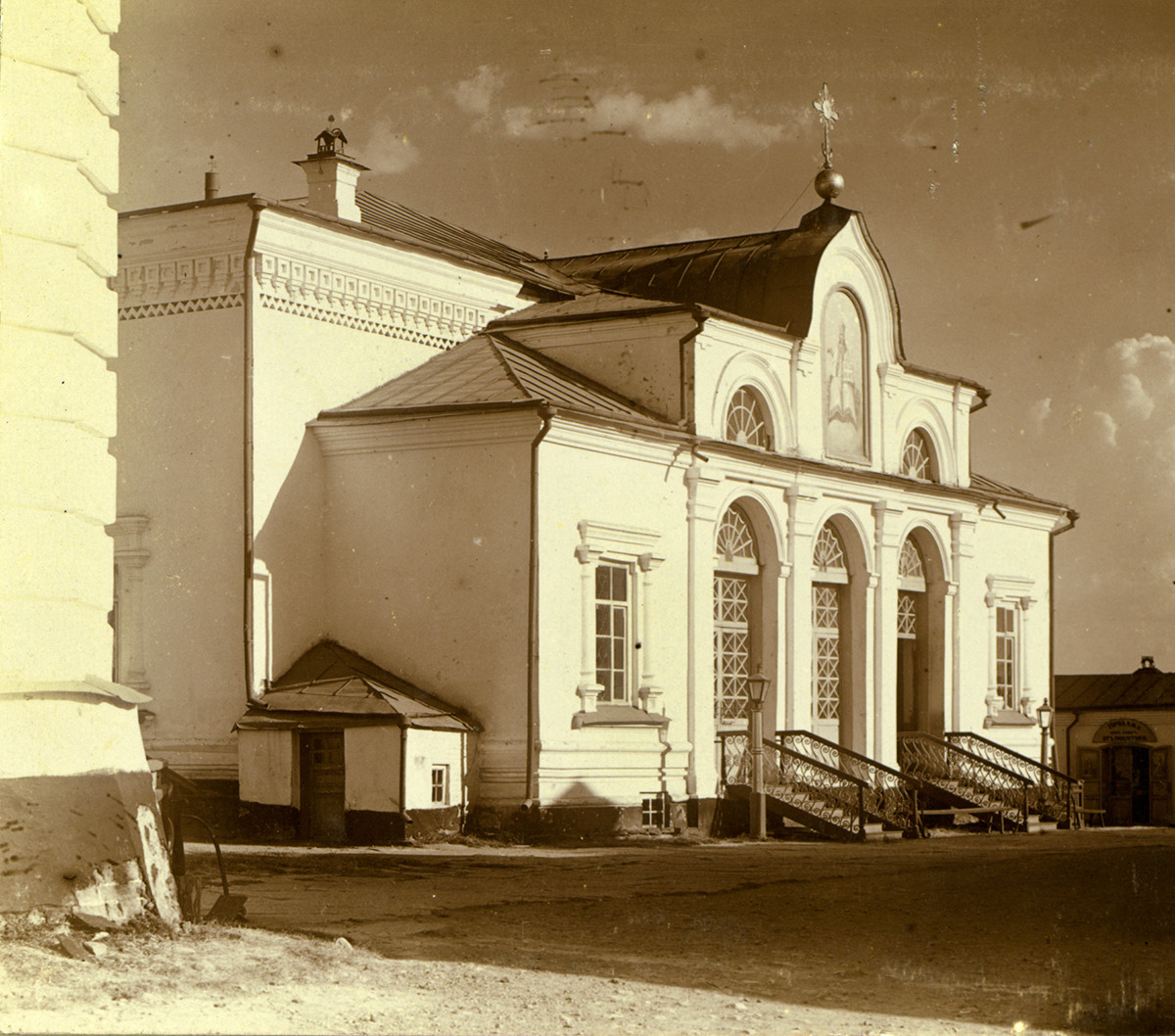 Shortly after the completion of the Transfiguration Cathedral, plans were proposed for a new church above the Holy Gate, the monastery’s main entrance, Dedicated to Sts. Simeon and Anna, the gate church was finally built in 1855-1856 in a fanciful, eclectic design. 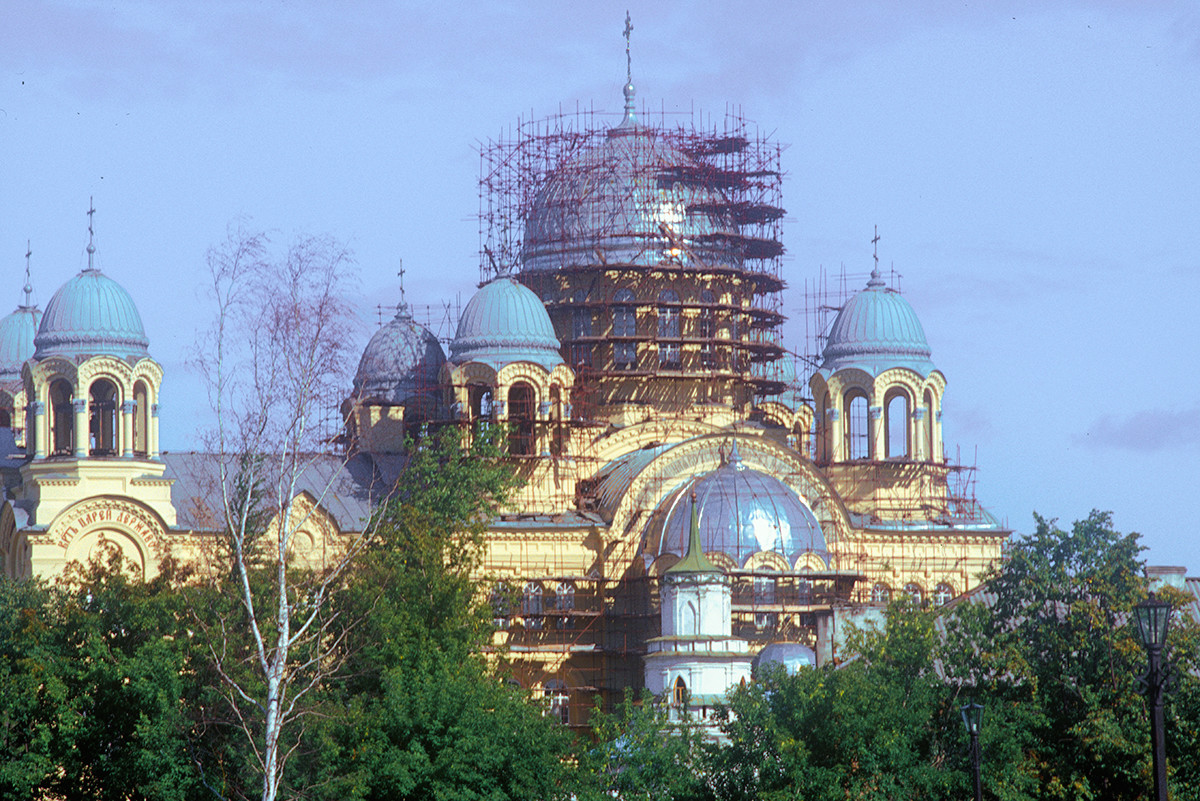 The grandest structure in the St. Nicholas Monastery, and one of the largest churches in Russia, is the Cathedral of Elevation of the Cross. Its construction was initiated in response to the growing number of pilgrims attracted by the relics of St. Simeon. Even the enlarging of the Church of St Nicholas in 1864 proved inadequate to accommodate the pilgrims, particularly after Nicholas II and his family took an active interest in the saint’s cult. By the early 20th century, the annual number of pilgrims reached 60,000. 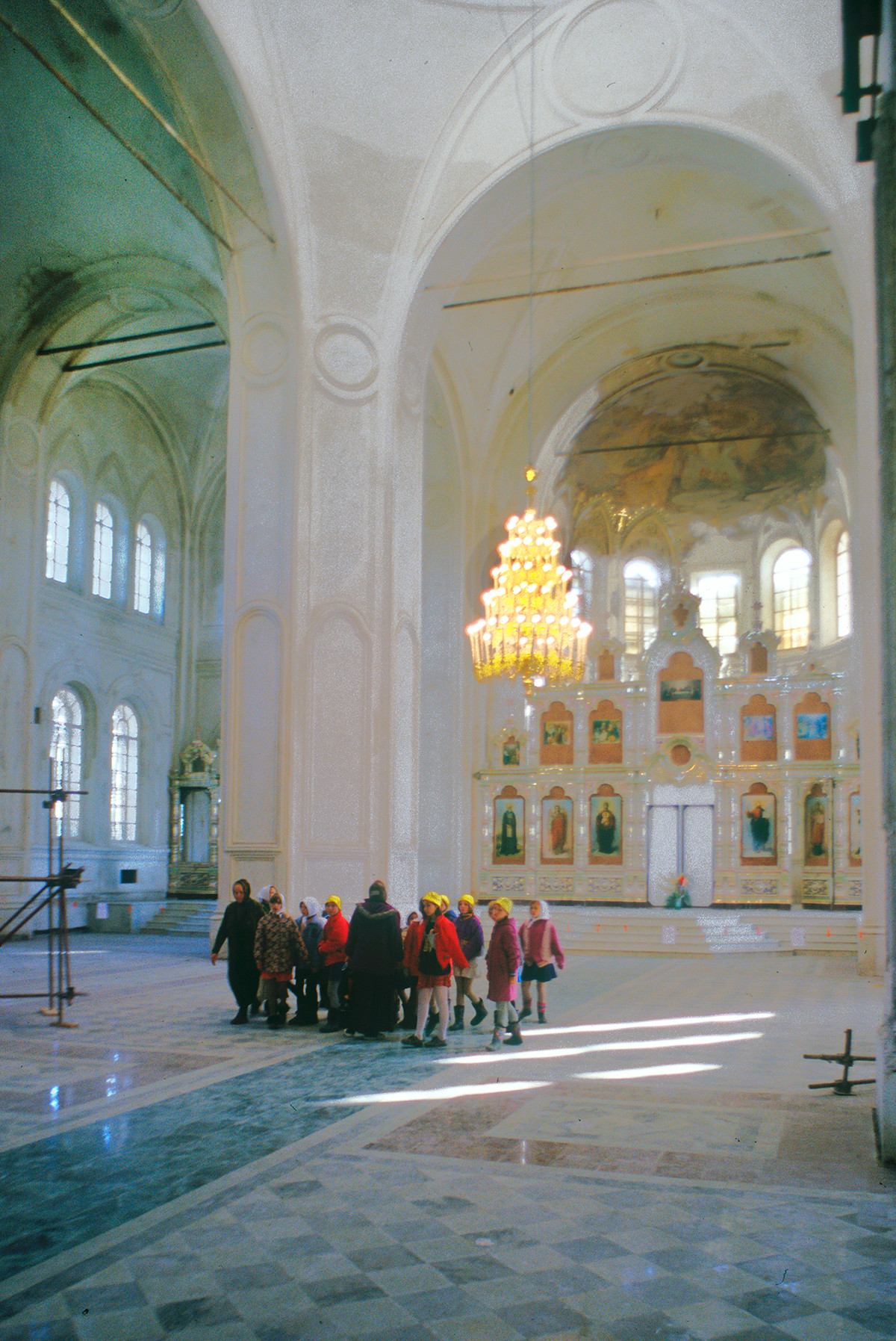 Church authorities decided to erect a grand cathedral dedicated to the Elevation of the Cross and designed by the noted Perm architect Alexander Turchevich that combined Byzantine with Romanesque elements. The eastern part of the structure conforms to the Orthodox centralized plan, while the western part has extended aisles typical of Western church architecture. 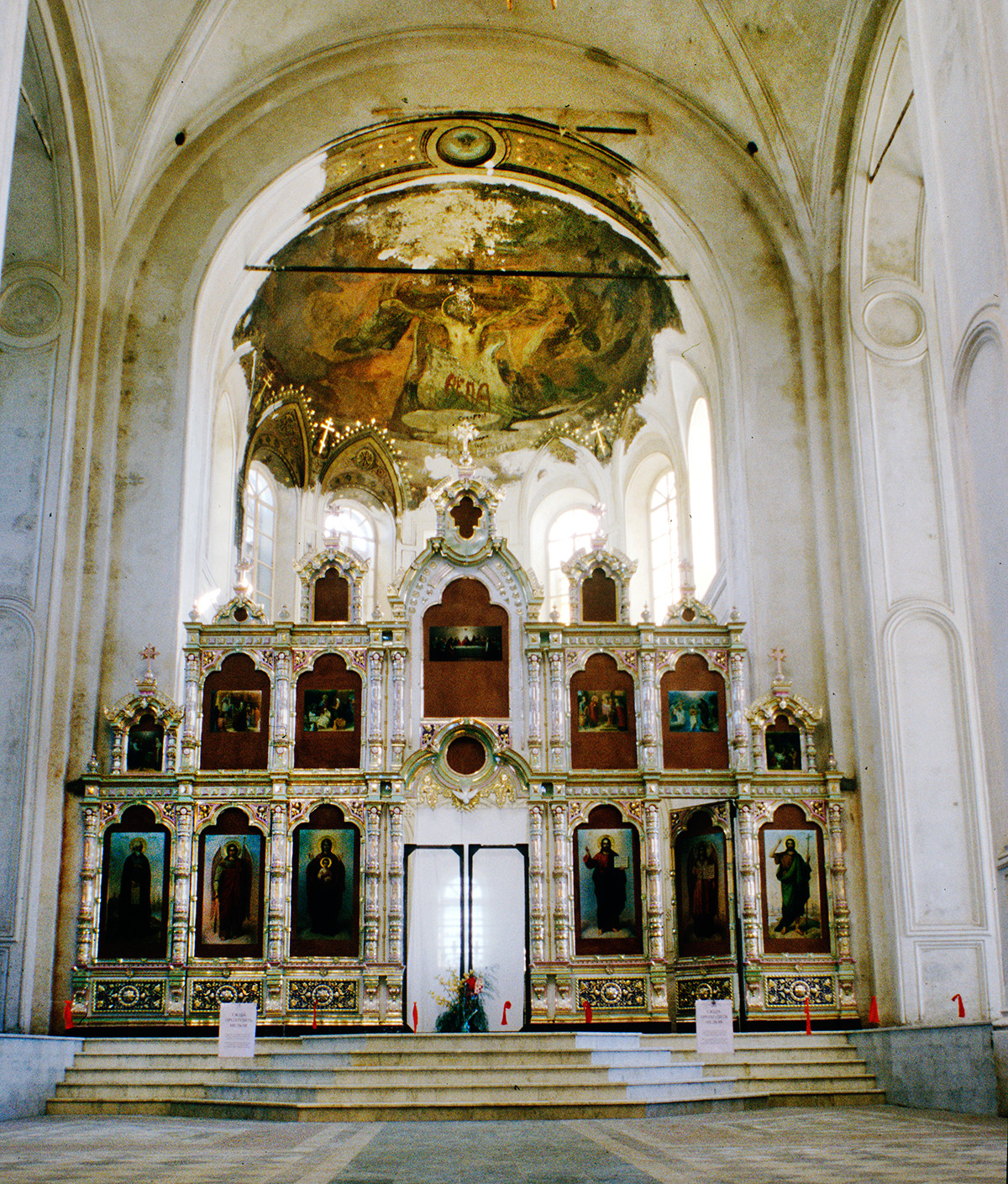 Enormous in size (almost seventy meters in length), the cathedral was begun in 1905 and completed only in 1913. Work on the interior continued thereafter until 1917. After Turchevich’s death in December 1909, construction was supervised by Ivan Kuroedov. Prokudin-Gorsky’s 1909 photograph shows the west part of the cathedral covered in scaffolding. By remarkable coincidence, my 1999 photograph shows the main dome encased in restoration scaffolding. 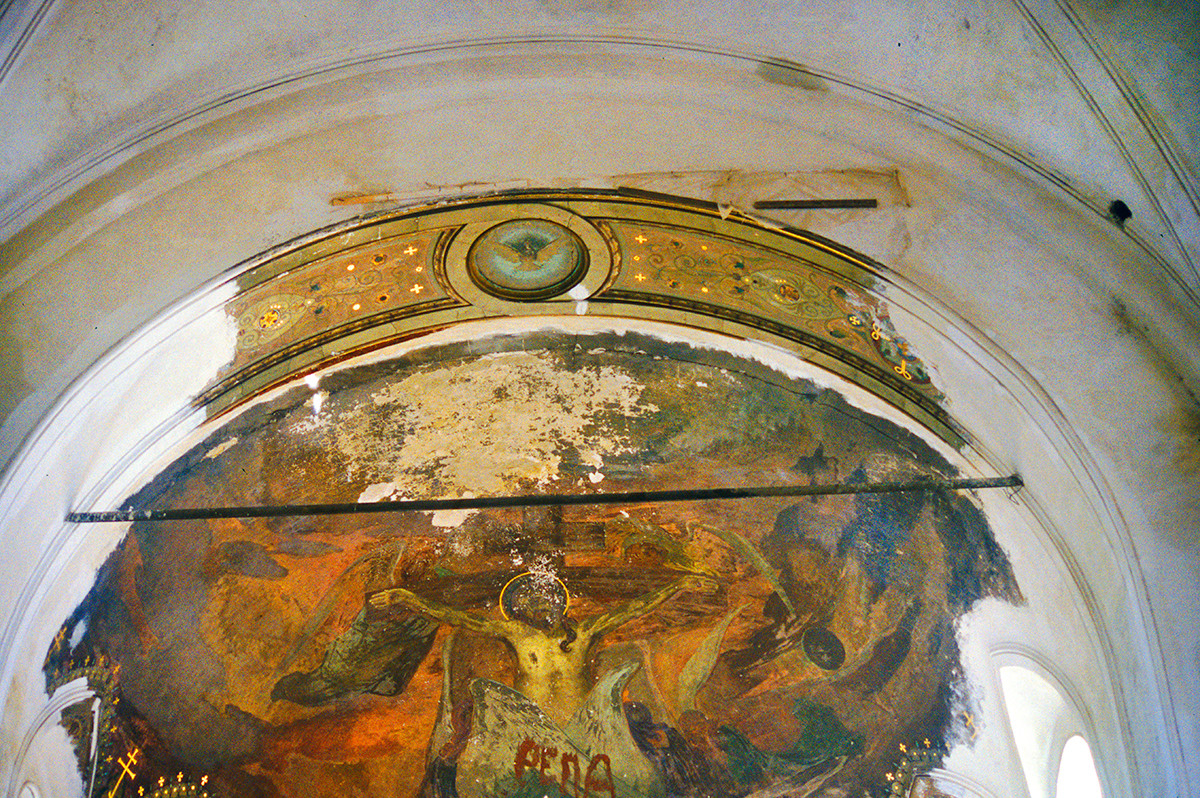 The superb engineering of the cathedral allowed an interior that was brightly illuminated and capable of holding thousands of worshippers. Among the treasures of the interior was a luminous ceramic icon screen made by the M. S. Kuznetsov Ceramics Company in Moscow. Reinforced by an iron frame, the icon screen spanned the entire eastern part of the cathedral, including the main altar as well as the two side altars. The left, or north, altar was dedicated in 1914 to St. Simeon, and the right was dedicated in 1916 to the Dormition.

The icons themselves were painted on zinc sheets by the Moscow workshop of S. K. Shvarov. Wall paintings were limited to the area behind the main altar. Further work was halted in 1917 because of political and economic uncertainty accompanying the abdication of Nicholas II, who had been a major patron of the monastery. 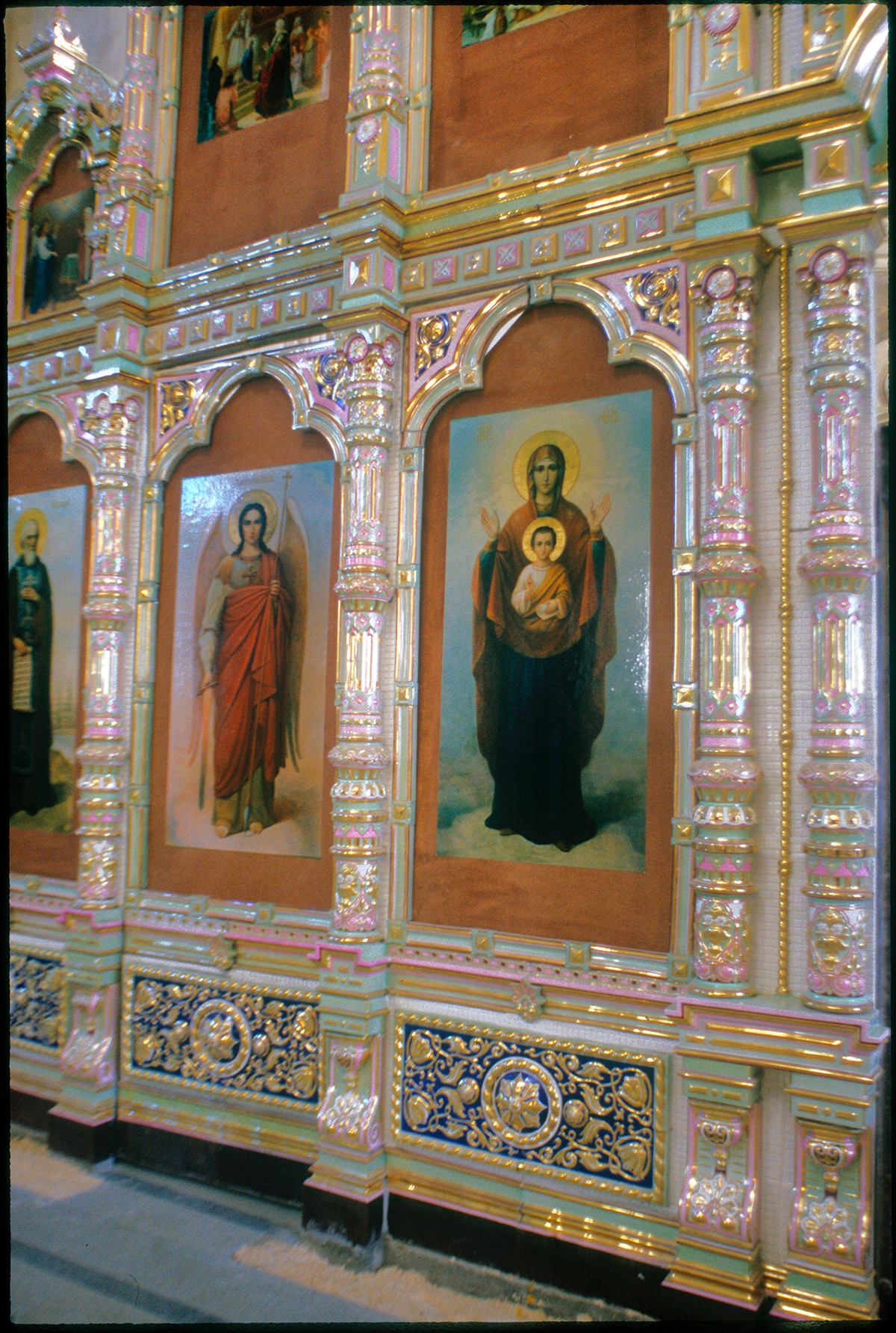 During the Soviet period, the St. Nicholas monastery was closed, the St. Nicholas church and the Transfiguration bell tower were destroyed, and the Cathedral of the Elevation of the Cross was ransacked. In a savage act of vandalism, the ceramic iconostasis was smashed, and the interior of the cathedral, like the other monastic buildings, was converted to use as a juvenile incarceration facility administered by the NKVD.

In a miracle of the restorer's art, the icon screen, with its Art Nouveau glazing, was recreated in the late 1990s through archival photographs and a few surviving fragments of the original icon screen. My photographs of 1999 show the damaged altar frescoes and the brilliantly restored icon screen. 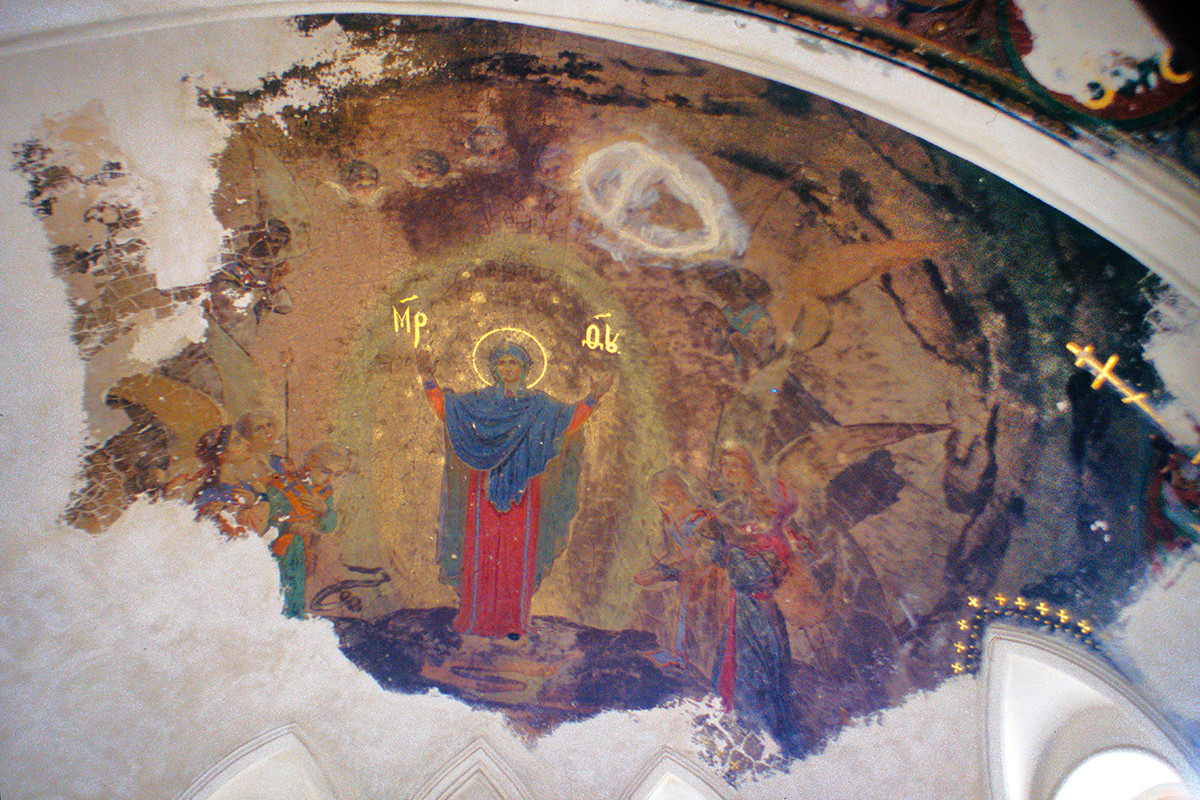 Cathedral of Elevation of the Cross. Wall painting of Virgin Mary in south apse. August 27, 1999.

In the early 20th century the Russian photographer Sergei Prokudin-Gorsky developd a complex process for color photography. Between 1903 and 1916 he traveled through the Russian Empire and took over 2,000 photographs with the process, which involved three exposures on a glass plate. In August 1918, he left Russia and ultimately resettled in France where he was reunited with a large part of his collection of glass negatives, as well as 13 albums of contact prints. After his death in Paris in 1944, his heirs sold the collection to the Library of Congress. In the early 21st century the Library digitized the Prokudin-Gorsky Collection and made it freely available to the global public. A few Russian websites now have versions of the collection. In 1986 the architectural historian and photographer William Brumfield organized the first exhibit of Prokudin-Gorsky photographs at the Library of Congress. Over a period of work in Russia beginning in 1970, Brumfield has photographed most of the sites visited by Prokudin-Gorsky. This series of articles juxtaposes Prokudin-Gorsky’s views of architectural monuments with photographs taken by Brumfield decades later.