What is life like in the world's only city built on the Arctic Circle? 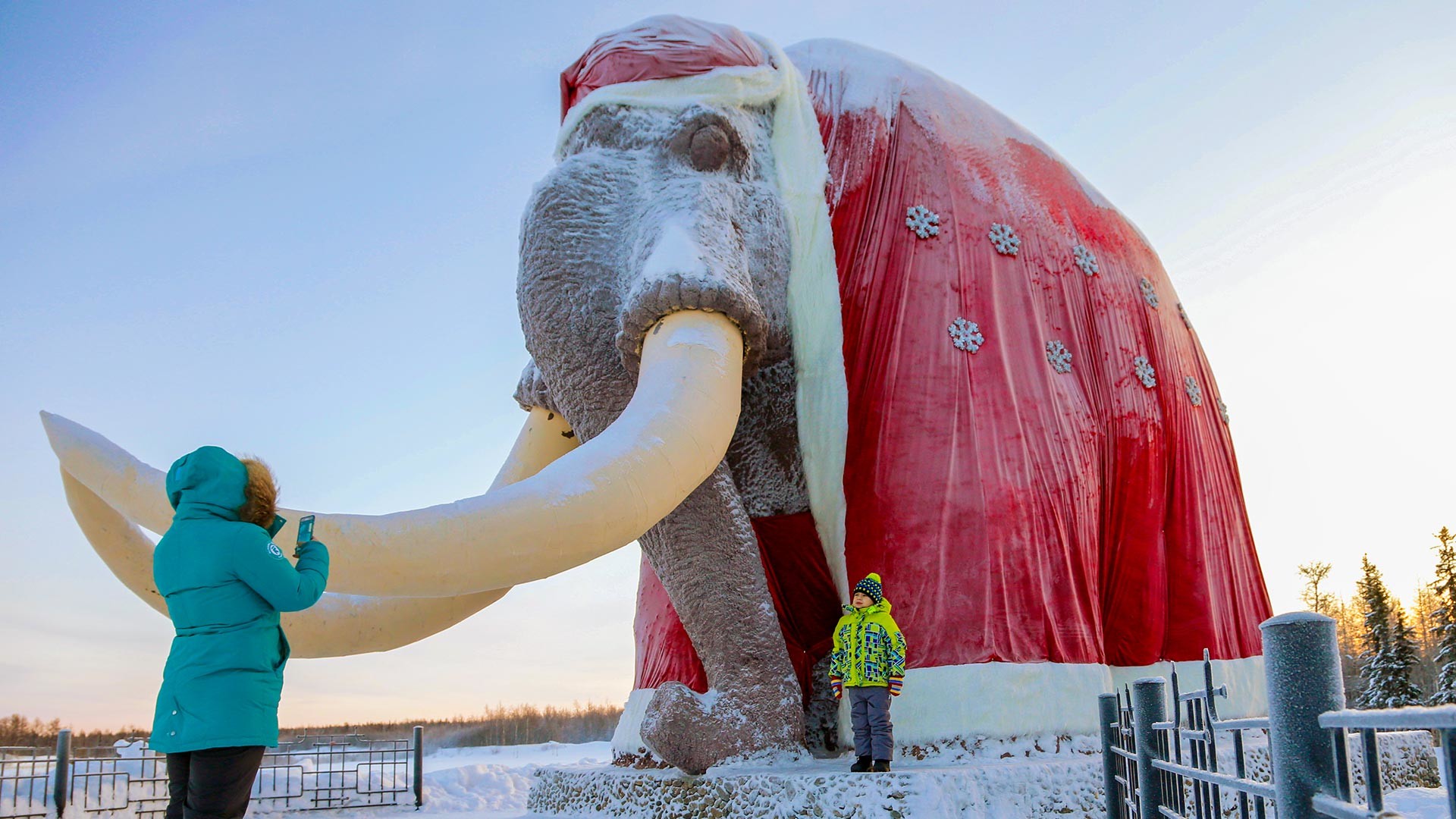 A monument to a mammoth called Mitya (Russian pet name for Dmitry).

Locals say that the best thing about Salekhard are its people and landscapes. Built on an endless expanse of tundra, it is one of the few cities in Russia's Far North where, despite the harsh climate, the population grows every year. We asked residents of Salekhard why they like it here so much.

'The only minus here is on the thermometer'

Andrey Syrovatsky is a PR manager for a local energy company. He moved to Salekhard in 2016 from the Krasnodar Territory, which is Russia's warmest region. “I have relatives here, I had been to Yamal many times and knew where I was going,” Andrey says. “Here I have ideal work conditions and pay.” 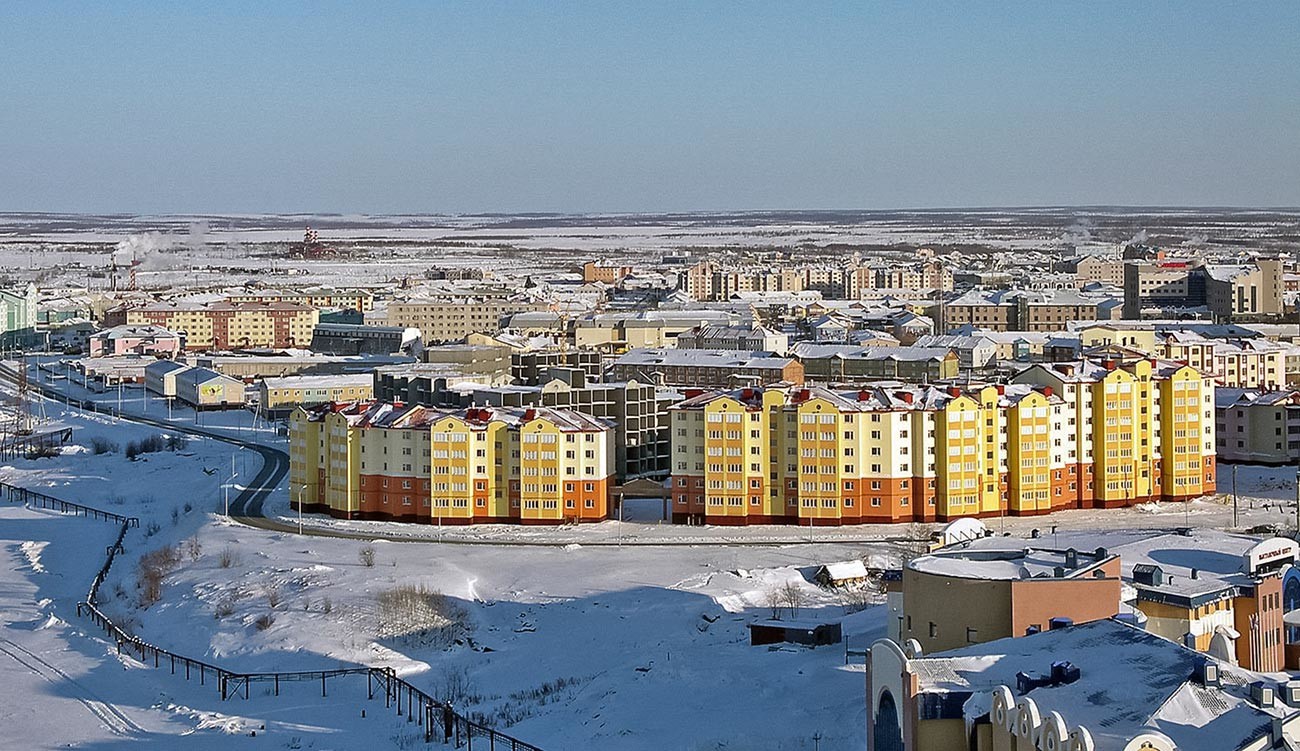 Salekhard is the administrative center of the Yamal-Nenets Autonomous Area and the third largest city in the region. The largest cities are Novy Urengoy and Noyabrsk, both of which have a population over 100,000 people. Most of their residents work in the oil and gas sector (about 80 percent of Russia's gas is produced in Yamal), while in Salekhard, with a population of around 50,000 people, residents are employed in reindeer herding (about 10 percent of locals come from indigenous peoples: Nenets, Khanty, Komi-Zyryans), fishing and the services sector. At the same time, Salekhard traditionally ranks among Russia's top cities for high wages and salaries thanks to additional bonuses for climate and remoteness (in October 2020, it was in the third place after Moscow and Yuzhno-Sakhalinsk). In addition, people living here are entitled to certain special benefits, such as early retirement, a relocation allowance and an annual leave allowance of 55 instead of the standard 28 days.

“Everything in Salekhard is developing fast, social support is good,” Andrey says. “I've noticed that young people leave to get a university degree but come back and, moreover, bring other people with them.” 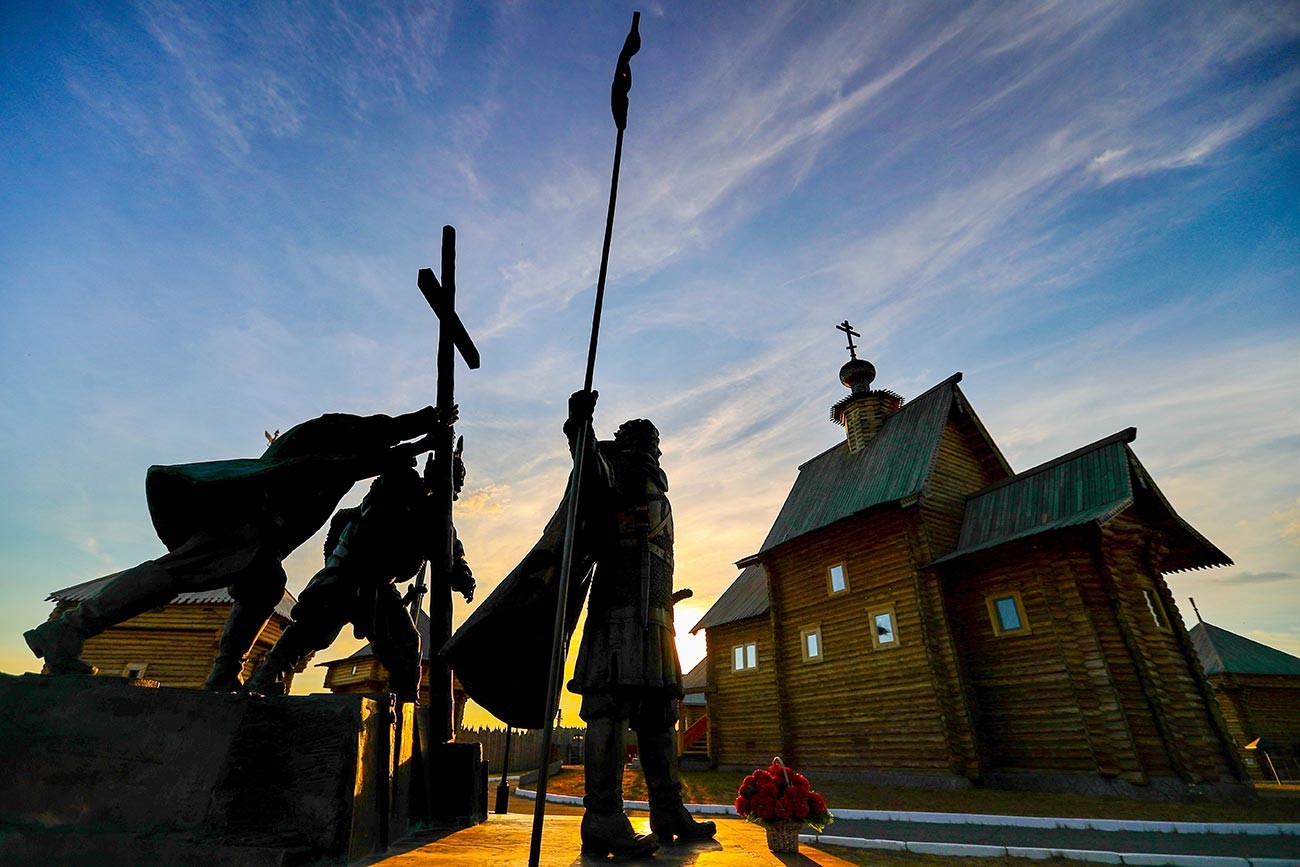 The modern copy of the old Obdorsk fortress is the main attraction in Salekhard.

Although a settlement called the Obdorsk fortress first appeared here in the 16th century, Salekhard itself was built during Soviet times. The construction process took into account the northern climate, and so the buildings here are erected on stilts to preserve the permafrost. Furthermore, there are hardly any drab gray facades here since the architects used bright colors to compensate for the lack of sunlight and vegetation. In recent years, Salekhard has been visited by young artists who come to decorate its buildings with striking murals depicting icebreakers, foxes and reindeer. There are even pine trees growing in the city. They were planted in the 1960s by young specialists who came here to develop the Far North, and the trees have managed to take root in the tundra, which does not happen often. 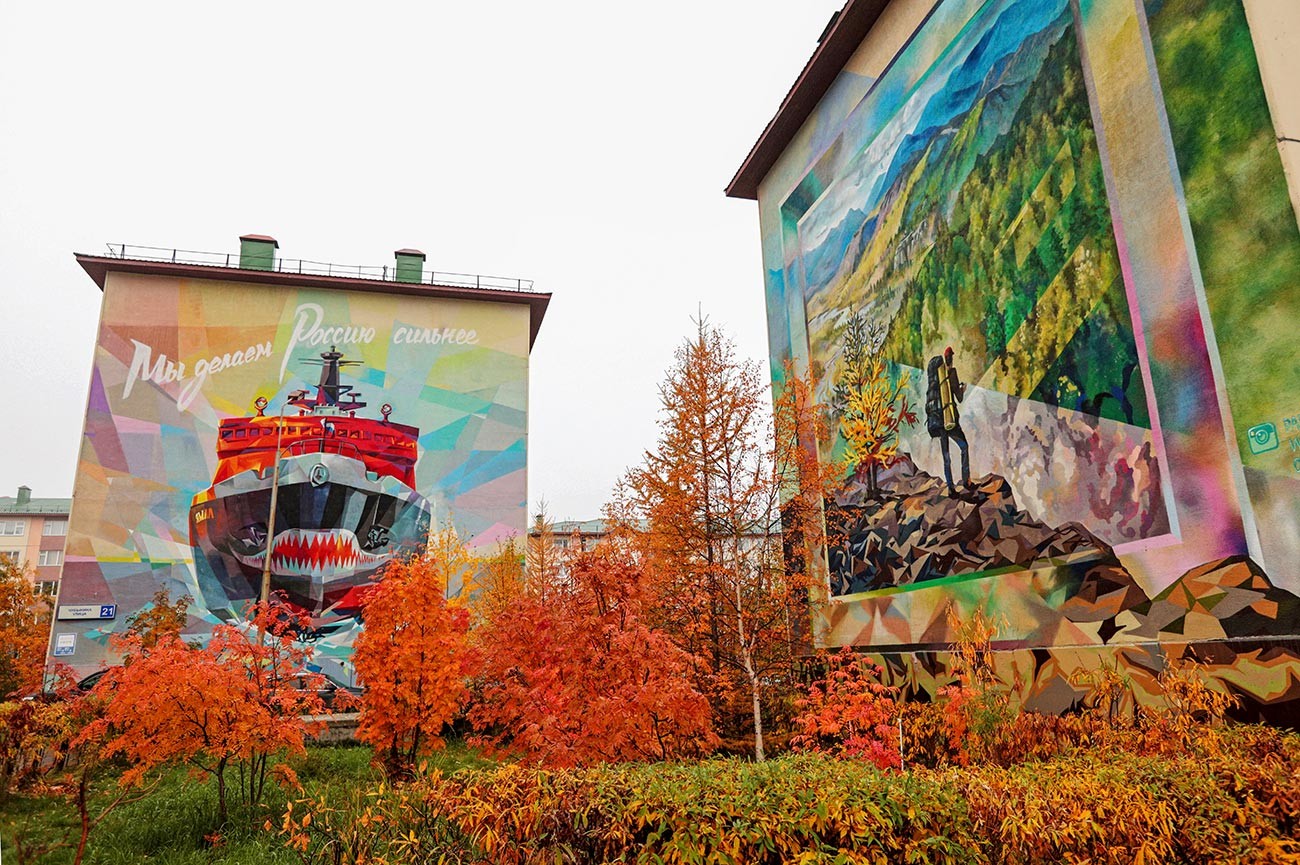 Graffiti on the walls.

One of locals' favorite places in the city is a 10-meter monument to a mammoth that was built on the banks of the Ob in 2004. Mitya, as it is popularly known here, is rarely seen “naked” since locals invent interesting new decorations for it for every holiday. For the FIFA World Cup, it wore a football scarf, and it is presently donning a protective mask. For the New Year, Mitya is usually dressed as Grandfather Frost, the Russian equivalent of Santa Claus. 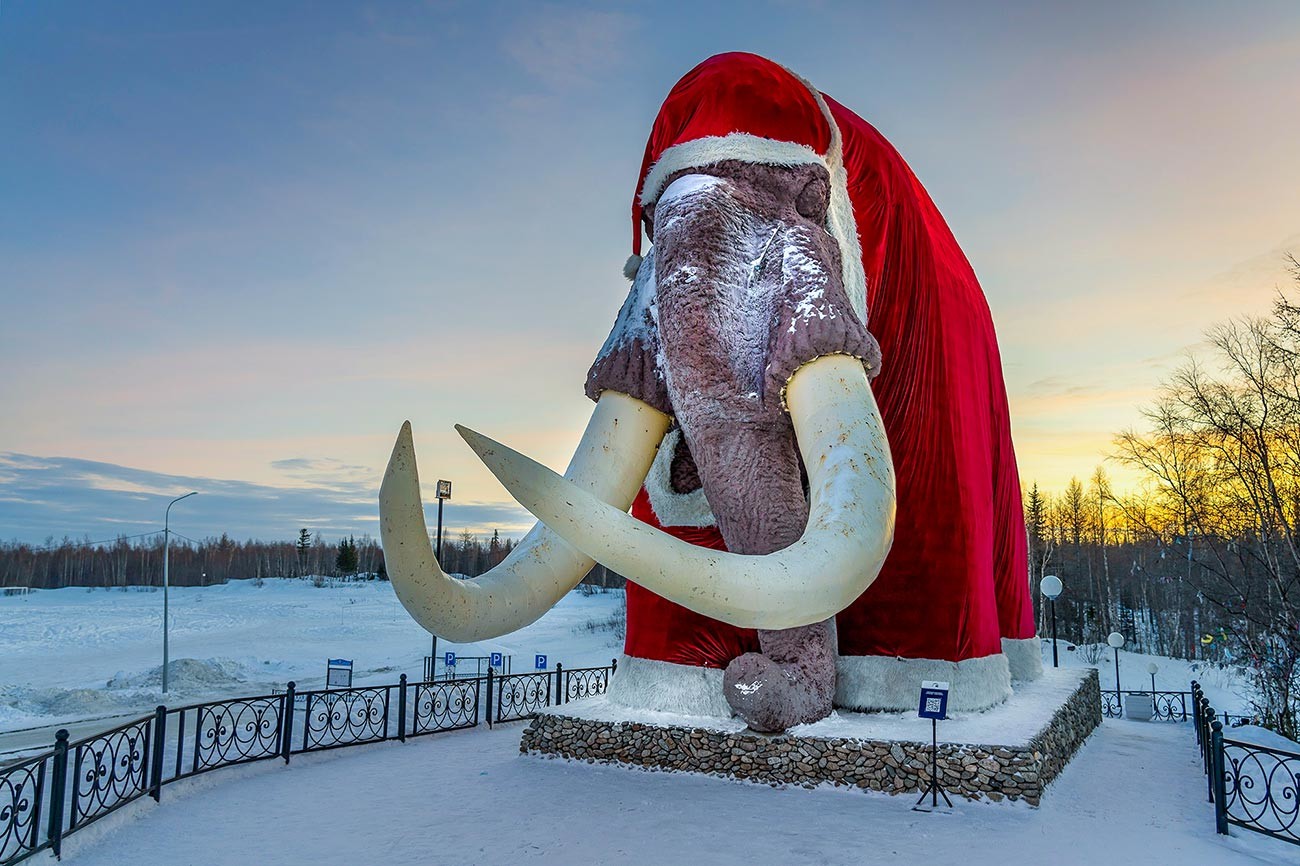 “In fact, the only minus for people here is the minus on the thermometer, as not everyone can withstand such temperatures. But I like this climate,” Andrey says. “The south, with its heat and humidity, didn't quite agree with me, whereas here the temperature has been minus 40 for a month now, so when it rises to minus 25, it will no longer feel so cold.”

Winters are indeed harsh here, with temperatures ranging from minus 30 to minus 50, and dense fogs. Furthermore, frosts can last from autumn to spring, ending only by the end of May. Snow often remains on the road well into June, although some residents believe that it used to be even colder in the past. 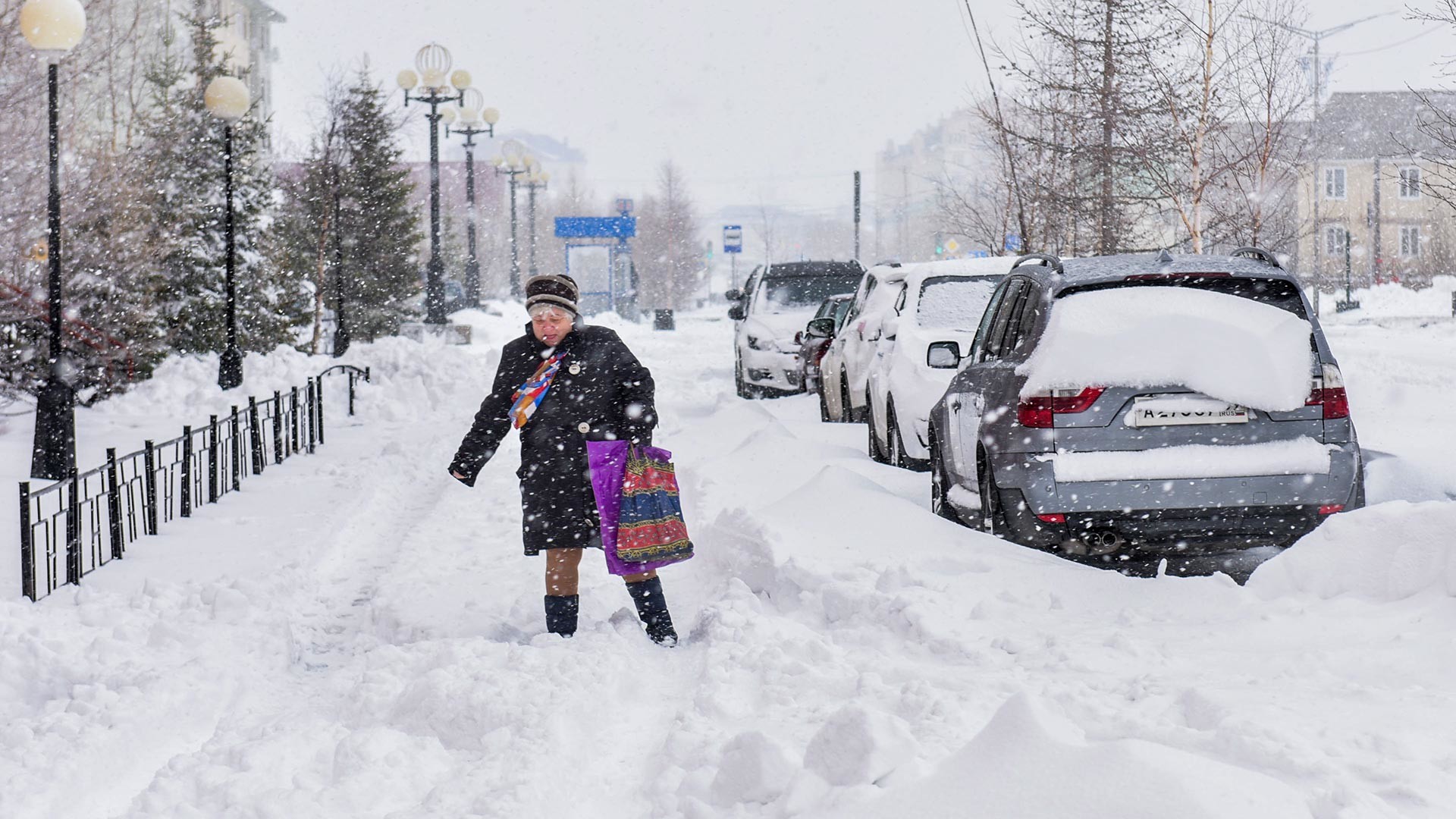 “Now the city is getting prettier every year, the climate has changed, even winters have become milder. Besides, when there is no wind, with temperatures not lower than minus 50 it does not feel that cold really,” says Nadezhda Terentyeva. She was born in a family of reindeer herders in the neighboring town of Labytnangi and has been living in Salekhard since 1984. Nadezhda says she finds it much harder to cope with summer heat in the city. 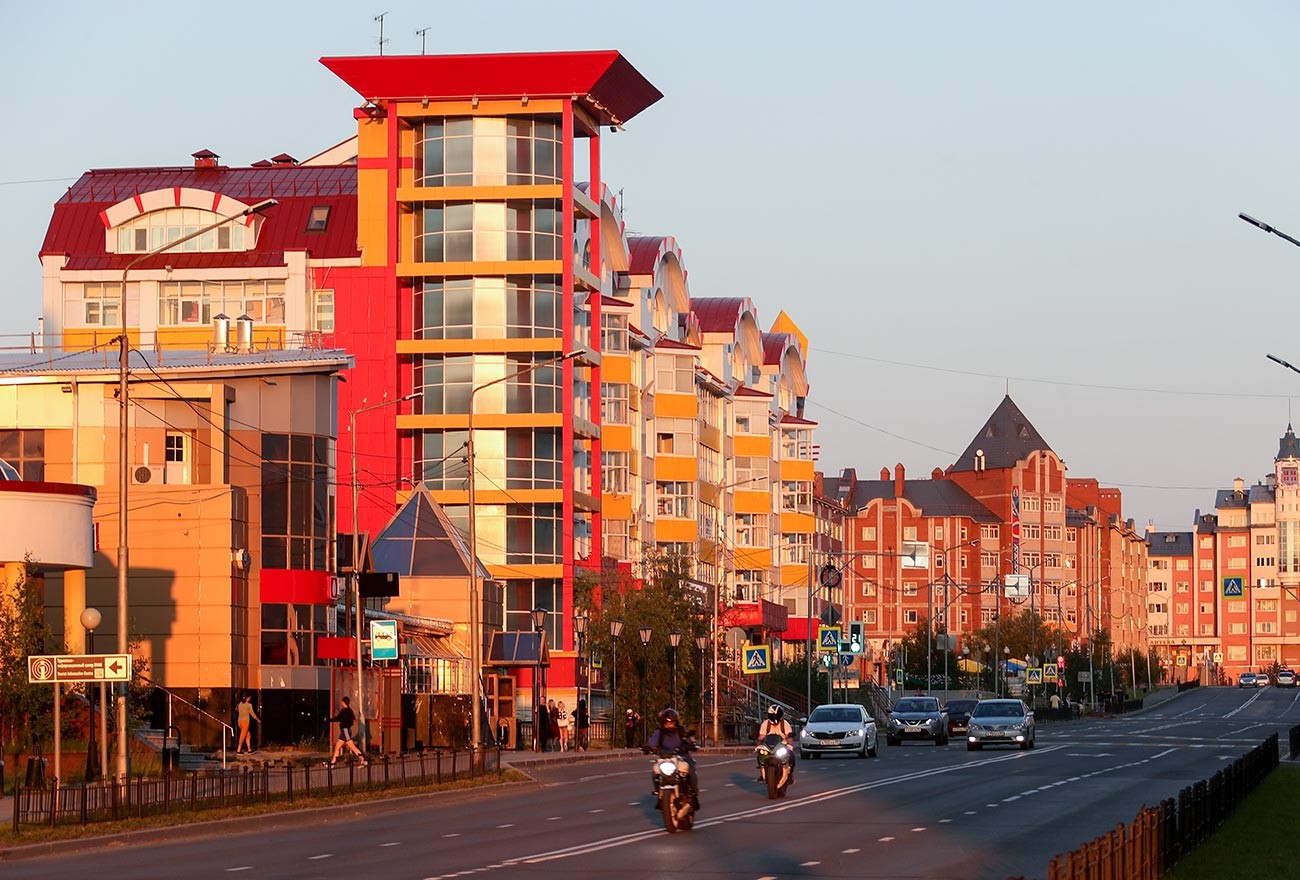 Warm evening in the city.

'The cold was here long before people'

Salekhard is the only city in the world that lies right on the Arctic Circle at a latitude of 66 degrees 33 minutes 39 seconds north. This is commemorated by a monument sign called the 66th Parallel. 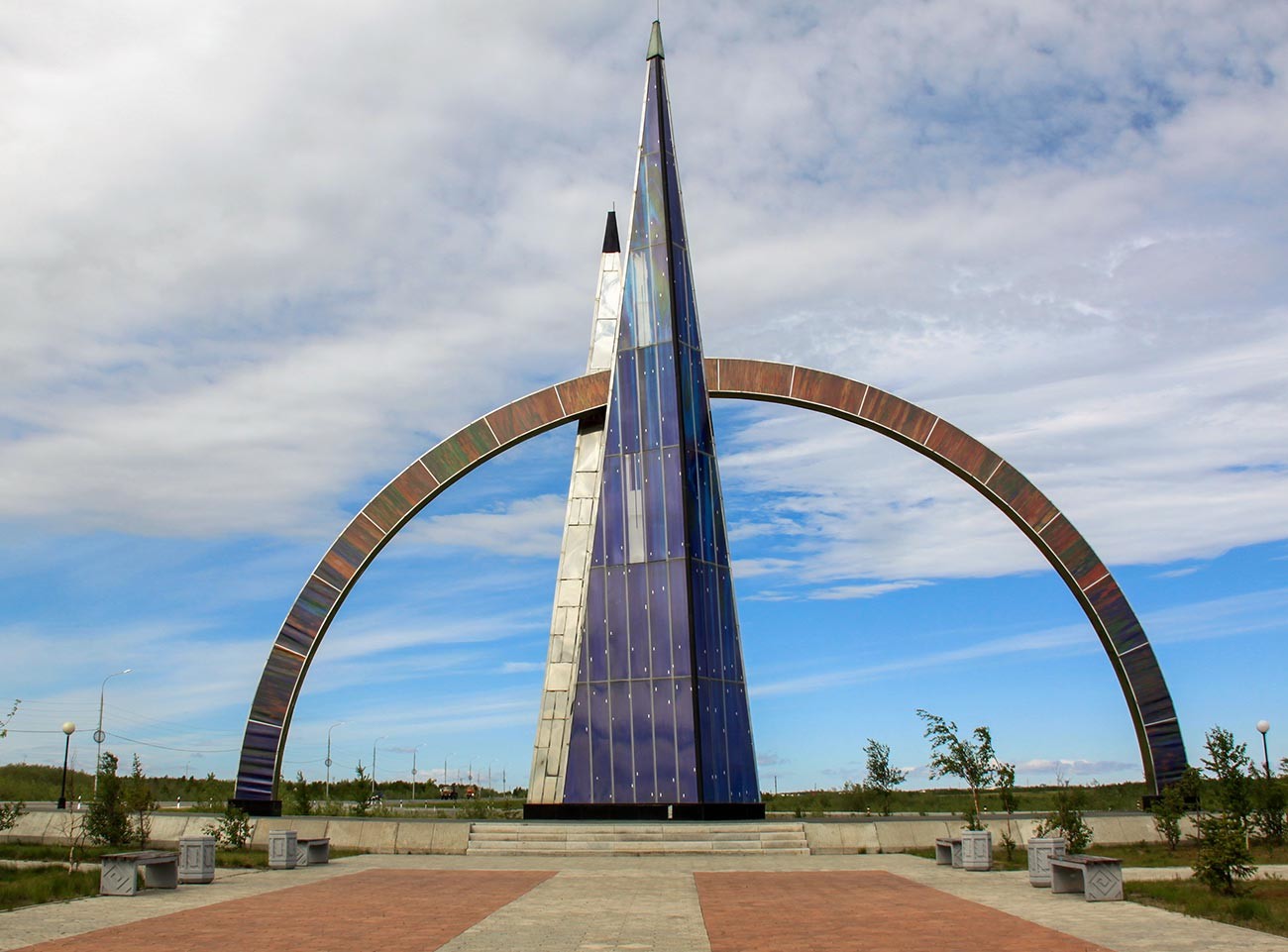 This means that the city has a polar day when the sun does not go beyond the horizon (this lasts for all of June) as well as polar twilight (when the sun seems to appear over the horizon but it is still dark).

“I had read a lot about it before moving here, but it was all wrong,” says Maria Fedchenkova. “For the first two months, I felt sleepy all the time." Maria is a neonatal intensivist who works treating newborn babies. She first arrived in the Far North at the end of 2019 when, after a hectic job in a busy hospital in Kaluga (in central Russia), she was looking for a quieter place to live. And Salekhard is definitely that. She was not deterred by the frosts and found that good thermal underwear and felt boots, the warmest footwear there is, really help.

A contest of icy art in Salekhard.

Maria says the hardest things to get used to were the polar day and the polar night. But her work schedule helped with this since her hospital shifts can sometimes last 36 hours. “It no longer mattered really what part of day or night it was outside,” Maria says. 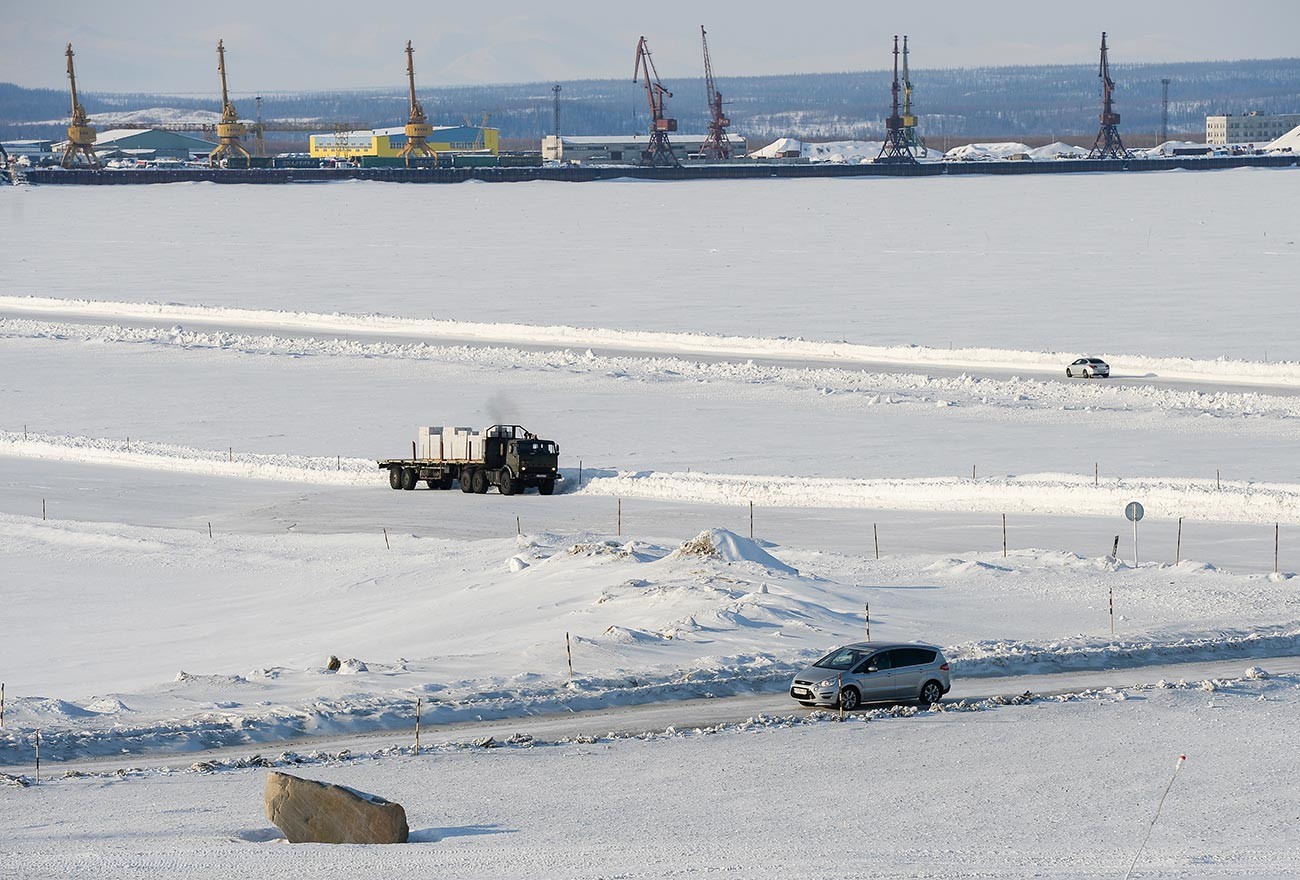 Another problem she had to face was the price of food. “Tomatoes at 500 rubles [$6.5] may be slightly frozen or have a plastic taste,” Maria says. Prices here are three times higher than in central Russia, mainly because the city is so remote and located far from other towns or federal highways. There is only an airport in the city, and the nearest railway station is on the other bank of the Ob River in the town of Labytnangi. In summer it can be reached by ferry and over the ice in winter since, due to the difficult river bed, a bridge has not been built here yet. At the end of 2020, a year-round 344 km long road to the city of Nadym was opened, and Salekhard got its first supermarket from one of the big chains. 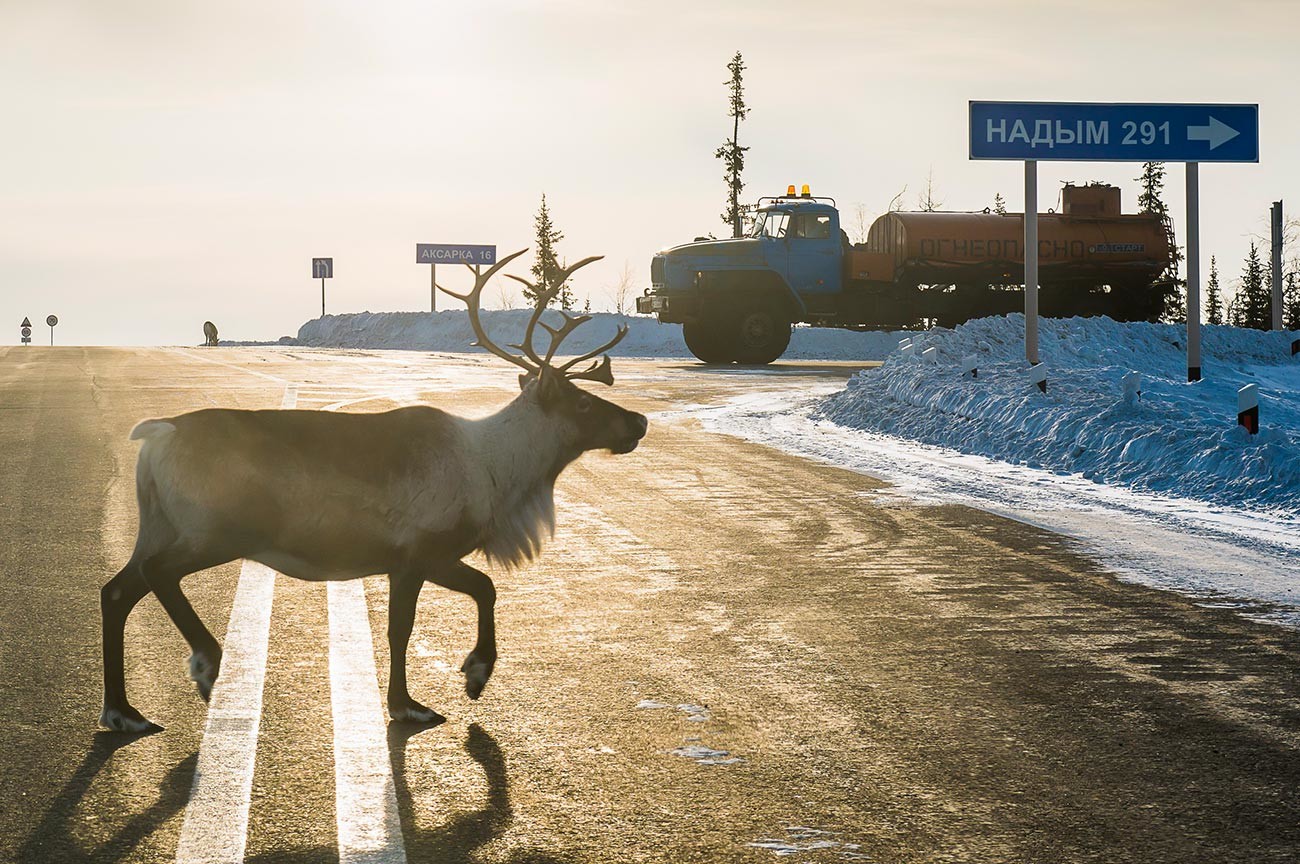 A deer on the road.

To reach patients based beyond Salekhard, including nomads in the tundra, Maria is flown by an air ambulance. “The cold was here long before people,” she says. “I wanted to learn the skills of surviving in harsh conditions, to find wisdom and become stronger. I like what I am experiencing in this place.”

Tourism beyond the Arctic Circle

A spirit of adventure inspired by the Far North attracts many tourists each year. In 2019, when travel was still possible, out of 200,000 visitors to the region almost 9,000 were foreigners. Many people come here especially for the main local holiday, the Day of the Reindeer Herder. After all, Yamal is not just Russia's main oil and gas producing region but also the center of reindeer husbandry. Residents of Yamal say there are more reindeer than people here, and this is true. There are more than 700,000 reindeer and just 550,000 people. 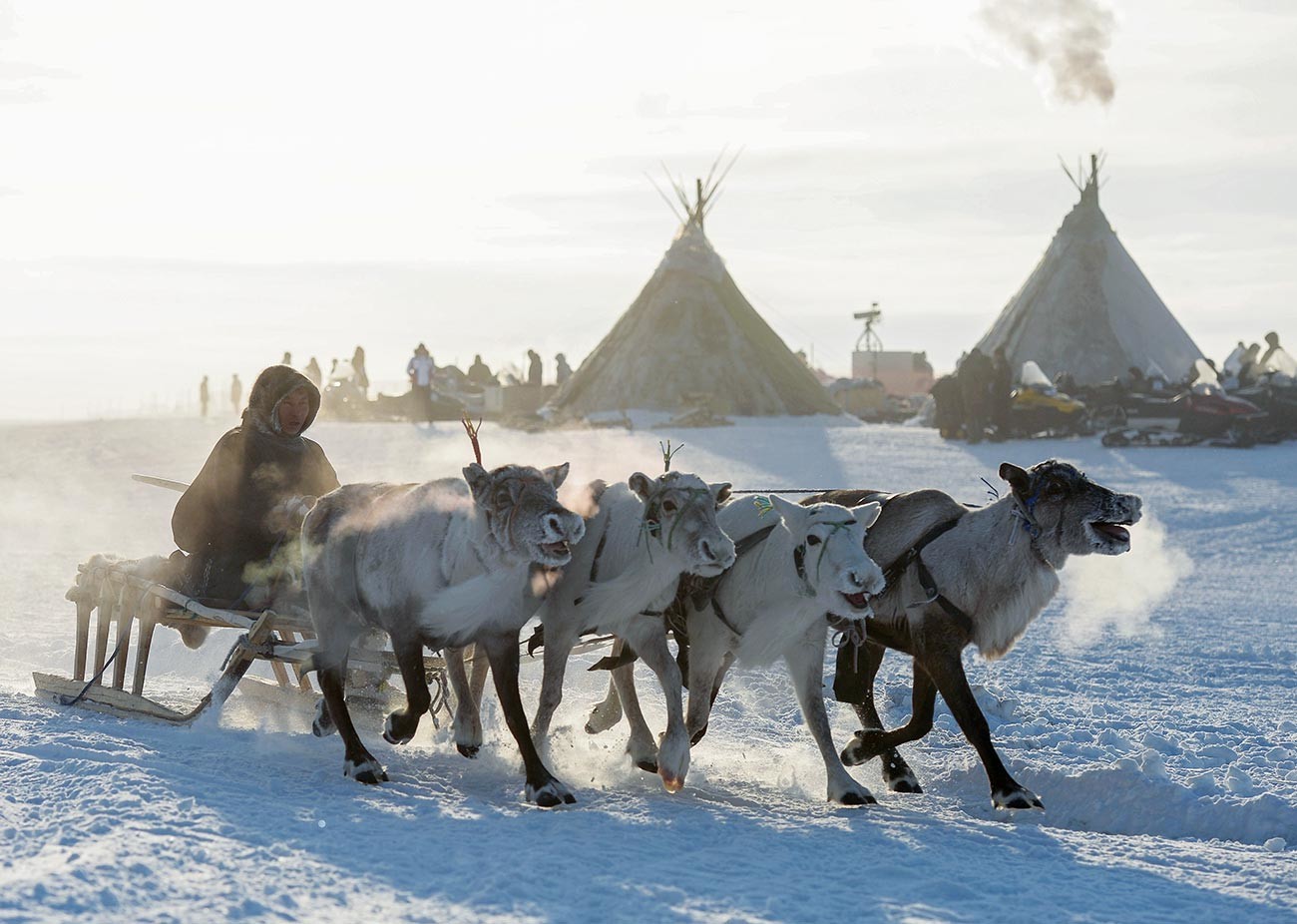 The Day of the Reindeer Herder.

Every spring, nomads come to Salekhard on beautifully decorated reindeer sleds and entertain tourists. The day is filled with competitions for traditional indigenous sports. Traditional dishes such as stroganina and venison are served, and everyone can take a ride in a reindeer sled or on a snowmobile. Tourists can even accompany nomads to the tundra to stay in a reindeer skin tent and try on the life of a reindeer herder.

If you get lucky, you can see rare natural phenomena without even leaving Salekhard. For example, you can sometimes see the northern lights or halo, when three suns appear in the sky at the same time. 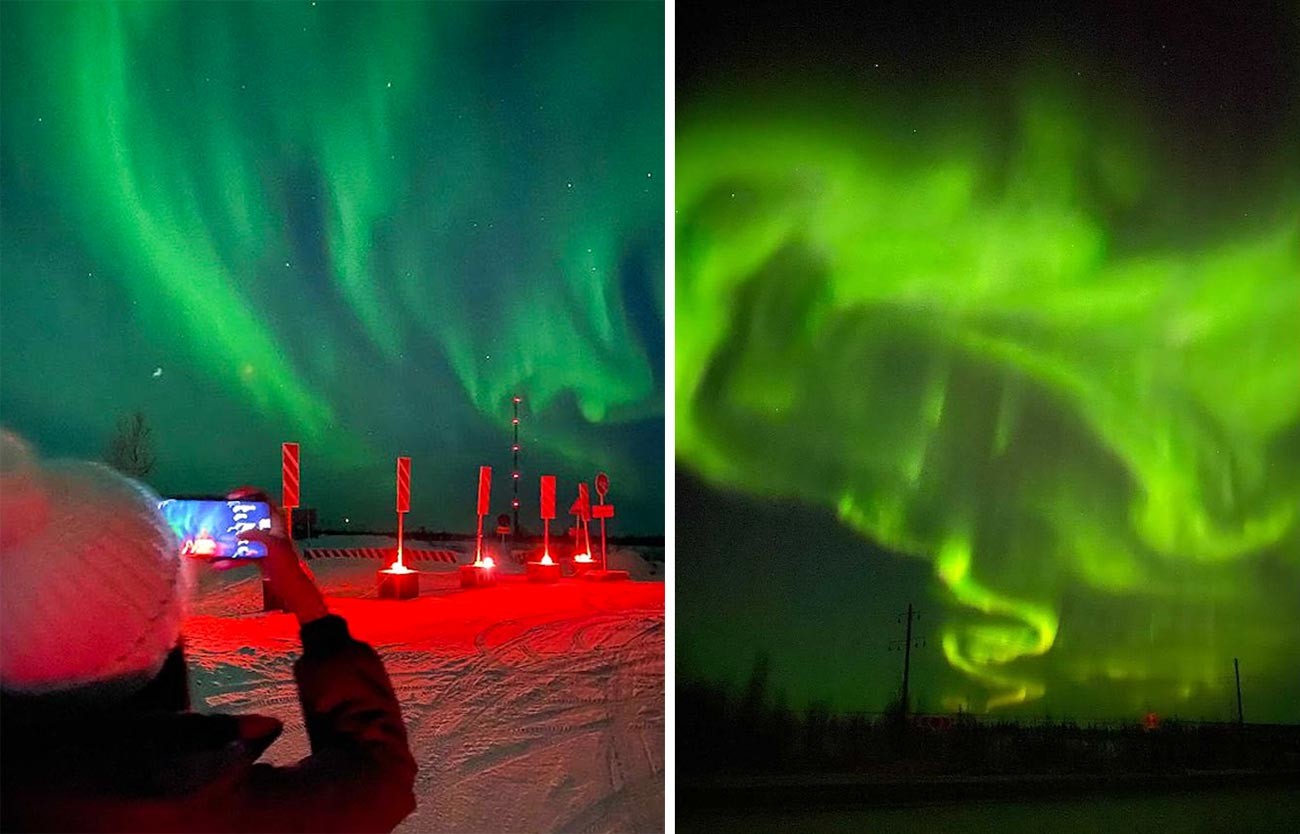 Many tourists come to see the remains of the unfinished Transpolar Highway project (Project 501). It was built by prisoners from a labor camp that was located outside Salekhard in 1949-1954.