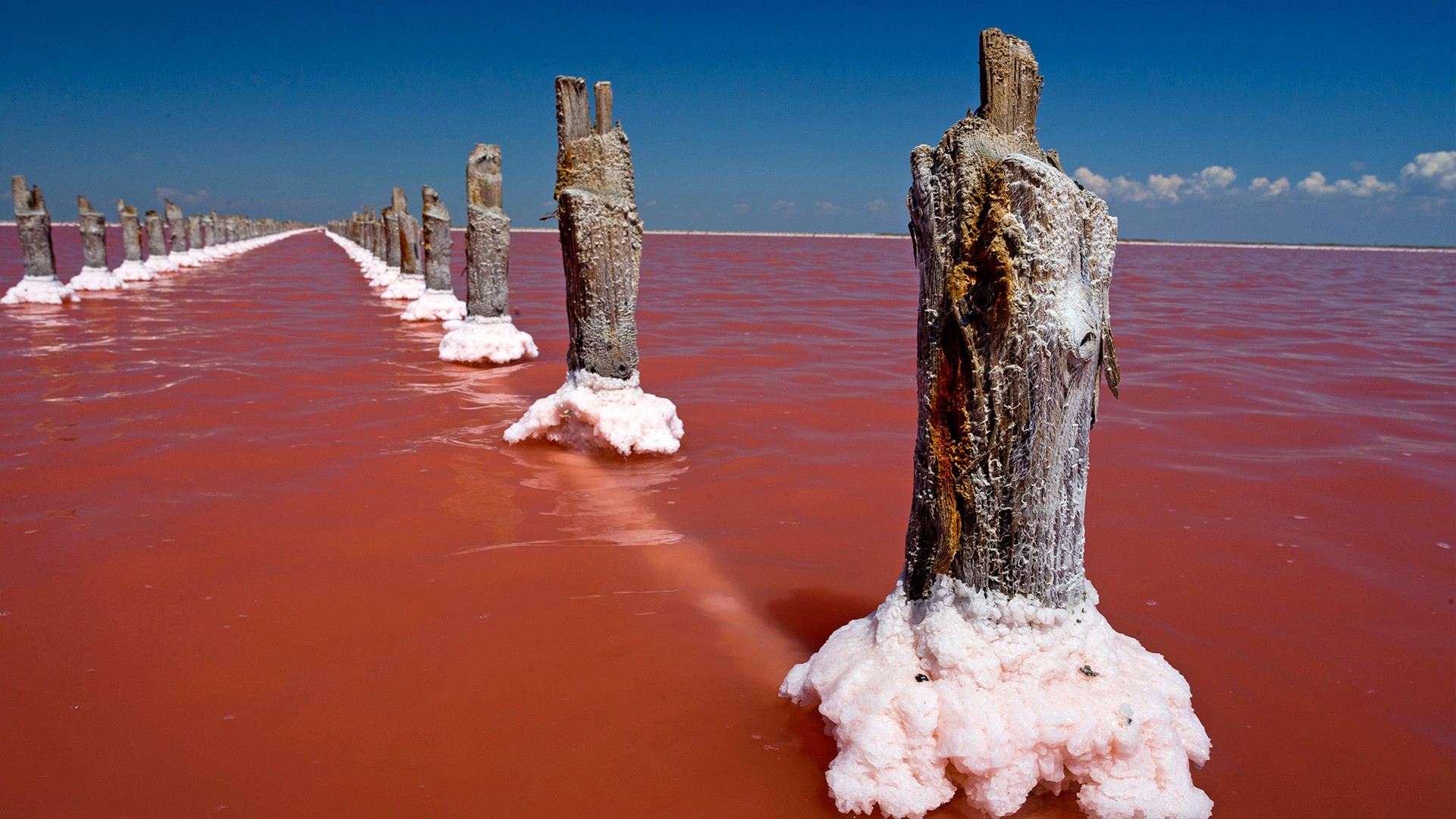 Sergei Malgavko/TASS
These pink, yellow and white lakes look surreal, but it’s not Photoshop and they weren’t painted by people!

White lakes on the Kuril Islands 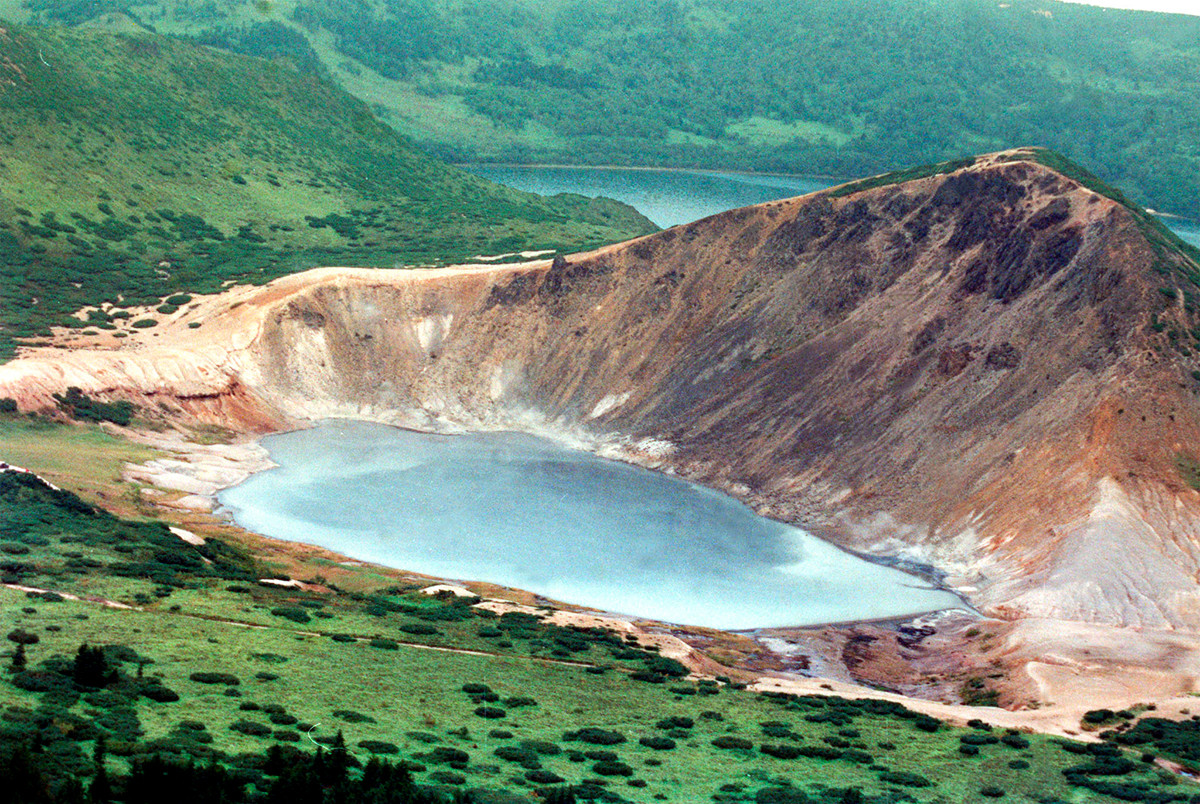 On the island of Kunashir lie two unusually white colored lakes, called ‘Kipyashee’ and ‘Goryachee’, which translate to “Boiled Lake” and “Hot Lake”, respectively. They fully live up to their names and they really do “boil”. 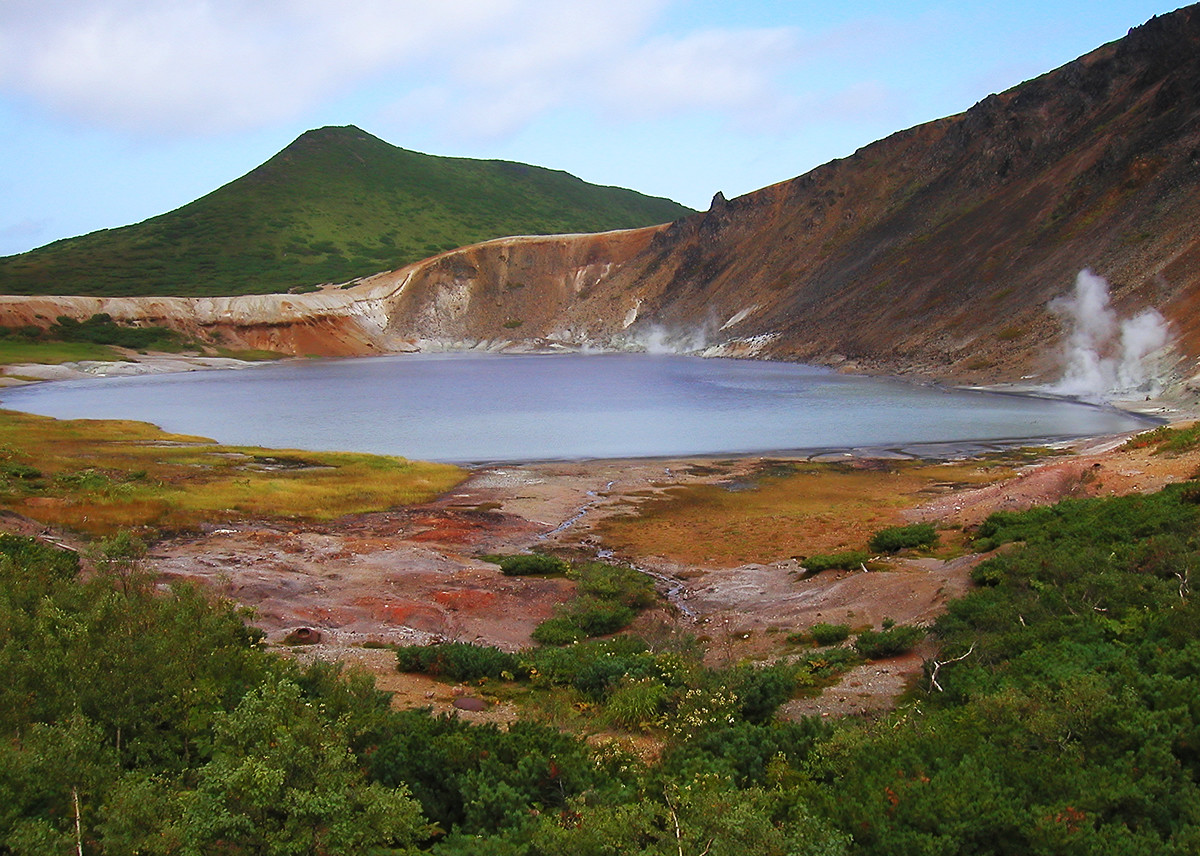 As a matter of fact, the composition of sodium carbonate includes natural sulfuric and hydrochloric acids and hot volcanic gases rise from the bottom, which “boil” the water. It’s best to observe these natural wonders from a distance. Due to the release of sulfuric gases, swimming in this kind of lake may be life threatening. 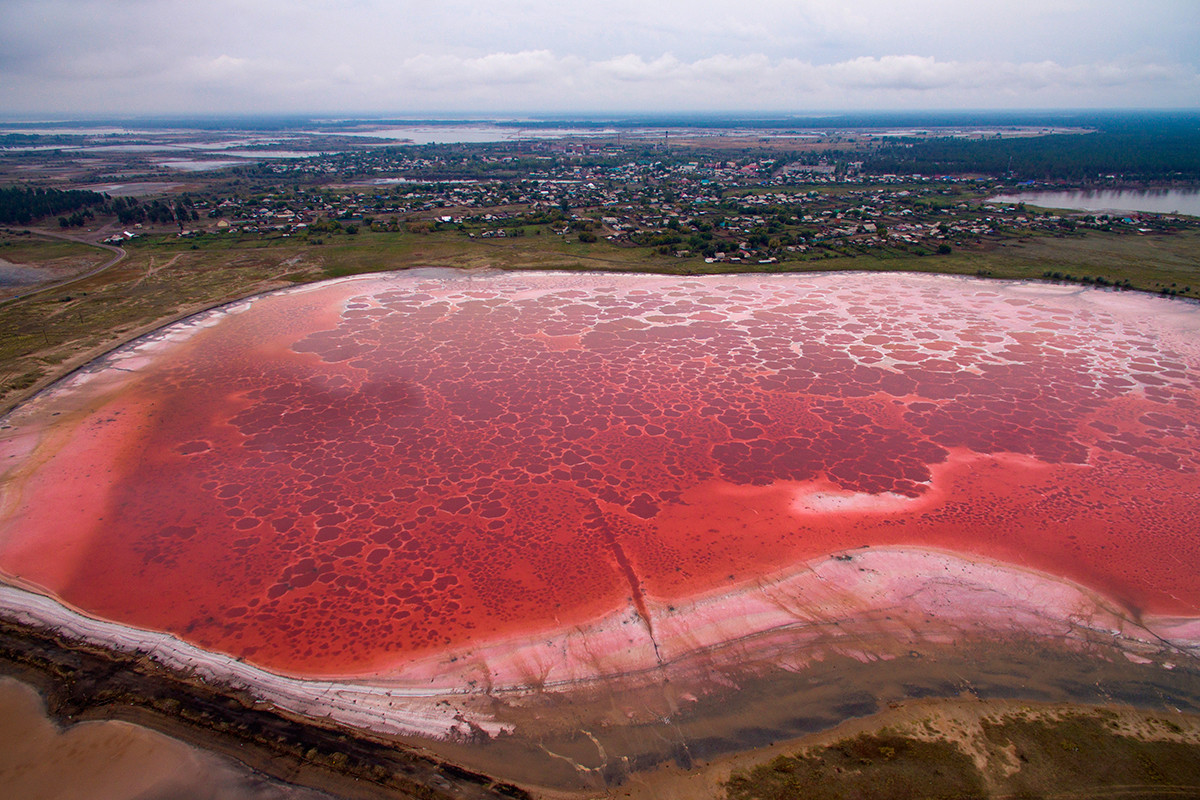 This saltwater lake is called ‘Malinovoe’ (“crimson”). It is located near the Russian border with Kazakhstan in an area of the eponymous village. Its striking crimson colored reservoir is beholden to the bacteria Serratia salinaria. The Crimson lake is regarded not only as one of the local sites, but also a real clinic. The lake’s salts and muds improve one’s metabolism and lower inflammation on the skin. There are tourist centers on the beach where you can stay and recharge. 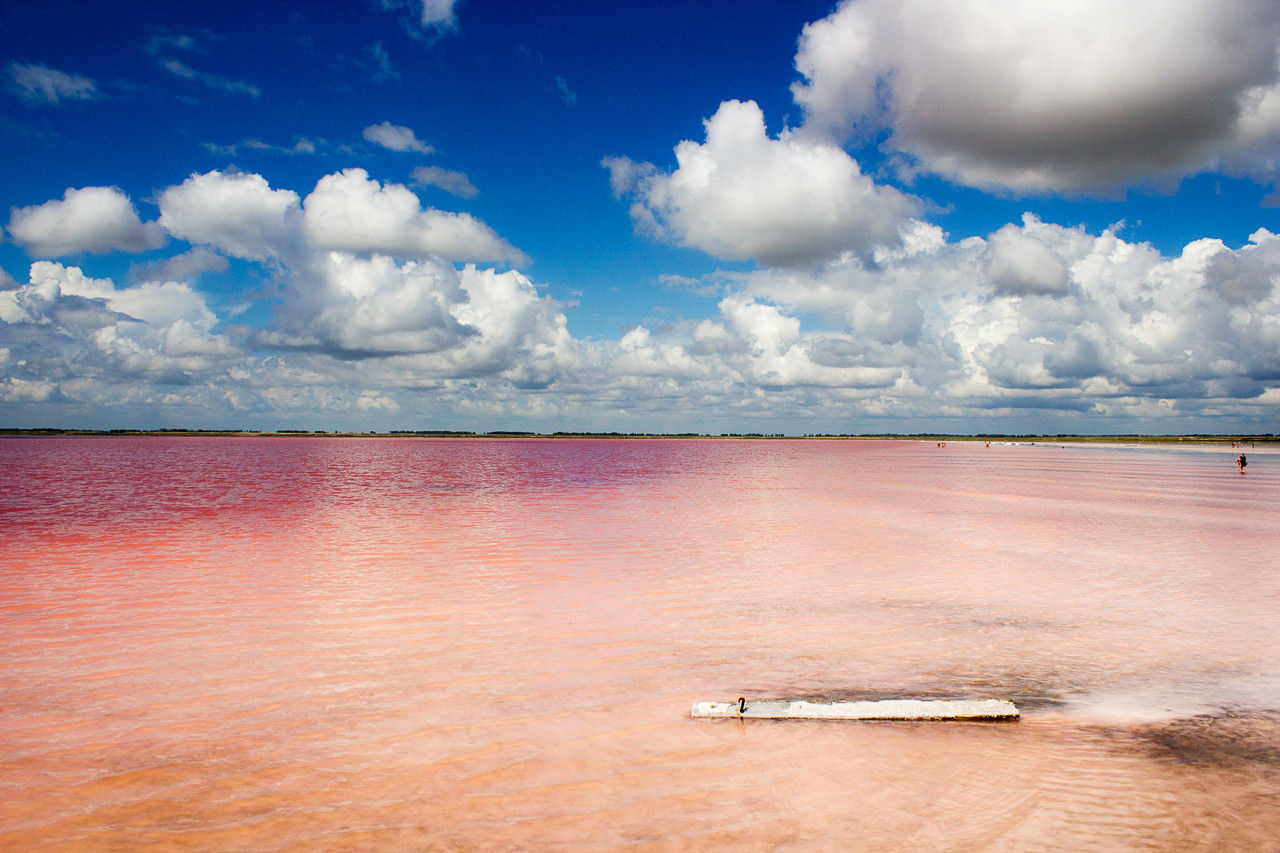 One of the most picturesque lakes in Altai krai is situated on the Kulundinskii steppe, not far from the city of Slavgorod. The lake is called ‘Burlinskoye’, or ‘Bursol’, named after a neighboring village. Salt is mined here on an industrial scale – the lakebed is covered in large salt crystals. Train tracks lie through the center of the lake for salt harvesting. In the hot days of July and August, the lake gets a pink, lilac or bright violet color, thanks to the Artemia brine shrimp. 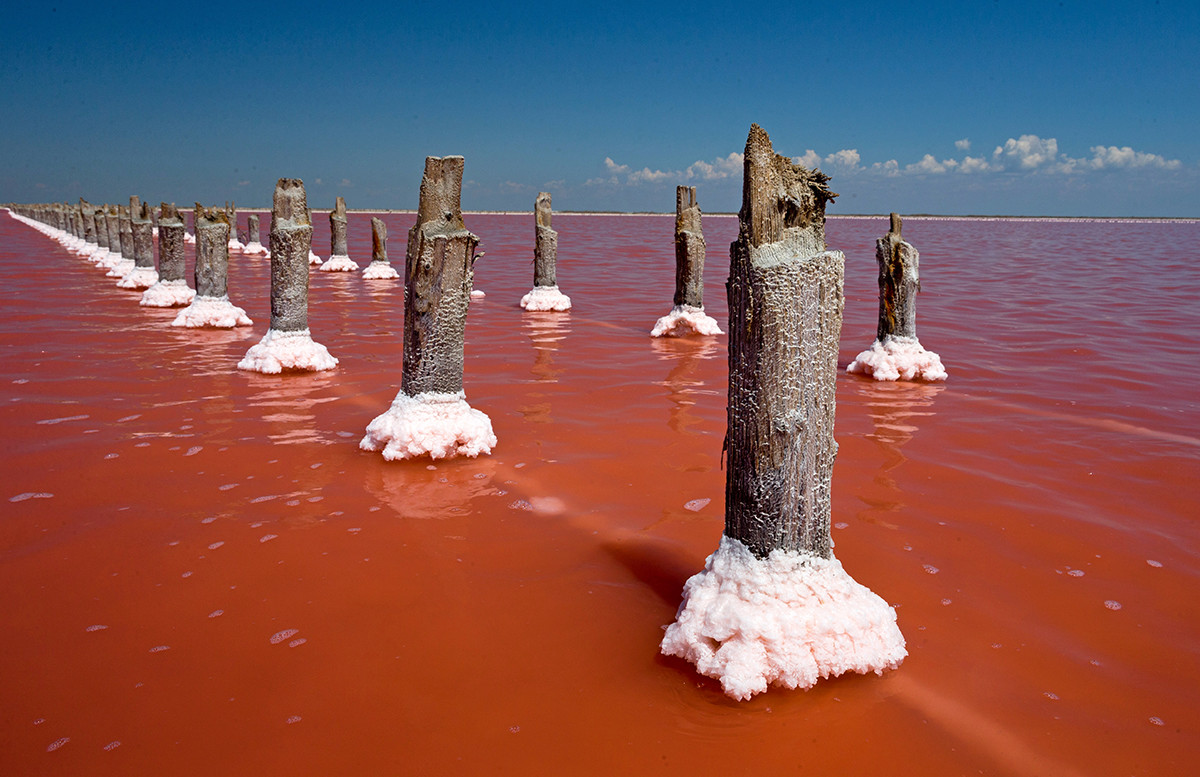 In Crimea, there are several medicinal salt lakes, some of which are an unbelievably bright pink. The most well-known is Sasyk-Sivash lake, nestled between the Saki and Eupatoria mountains. It may appear pink from July to September and, depending on the quality of the microorganisms, the lake may appear dyed a light pink, as well as a crimson red. Even so, it’s rather shallow, although in some places there may be slopes up to one and a half meters (about 5 ft).

Its name translates as “stinking mud” and it’s hard to disagree. It surely has a smell, as do many lakes and therapeutic mud, but it definitely doesn’t bother the numerous vacationers and sanatorium guests who are abound. The brine from Sasyk-Sivash lake is used for mud body wraps and is considered beneficial for your joints. And salt mined from the lake is sold in stores throughout the country! 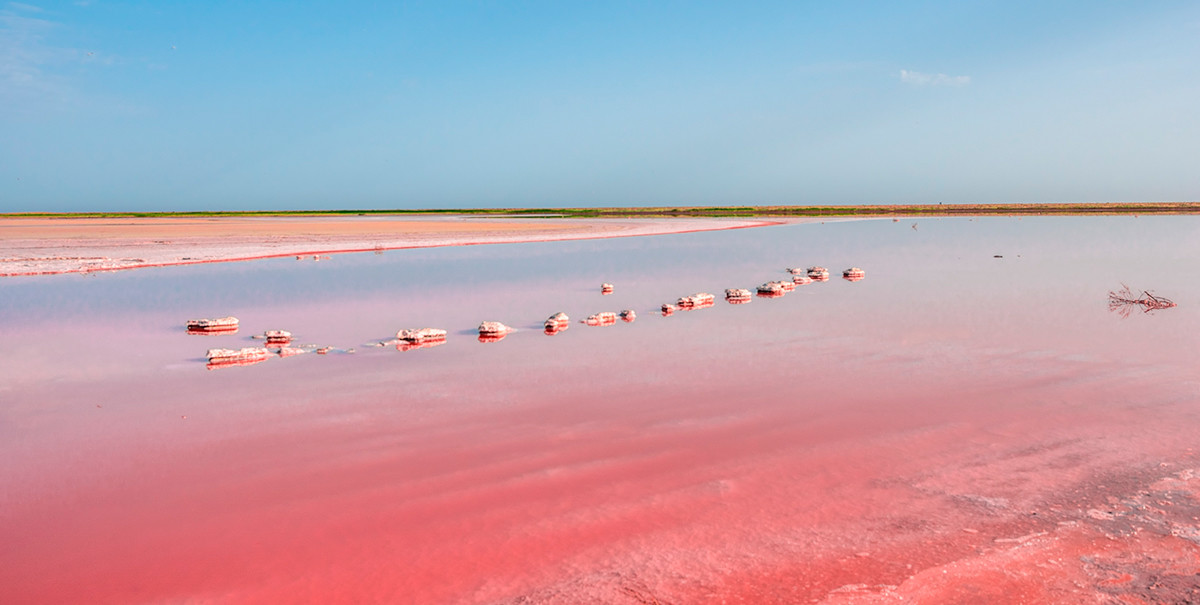 The saltwater Koyashskoe Lake is located on the opposite end of the peninsula, between Kerch and Feodosia and it’s also separated from the Black Sea by a narrow isthmus (only 100 meters / ~110 yards!). The water here not only happens to be pink, but purple and various shades of orange. It’s all caused by the bacteria Dunaliella salina, which produces beta carotene, like in carrots. 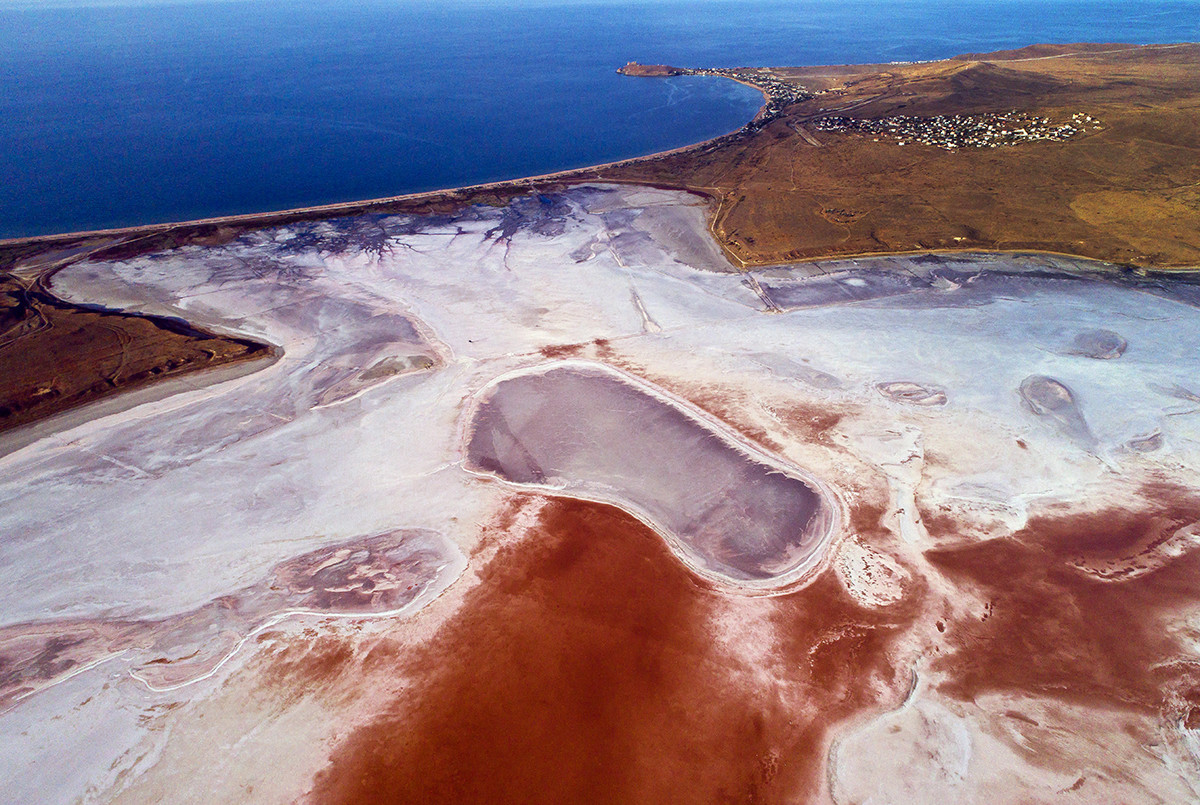 The Chokrak Lake, near Kerch, turns pinkish purple in hot weather. The water is saturated with hydrogen sulfide and salt and the lake’s brine is thought to be beneficial as a treatment for joints and the nervous system. The mud is also used to produce cosmetics. 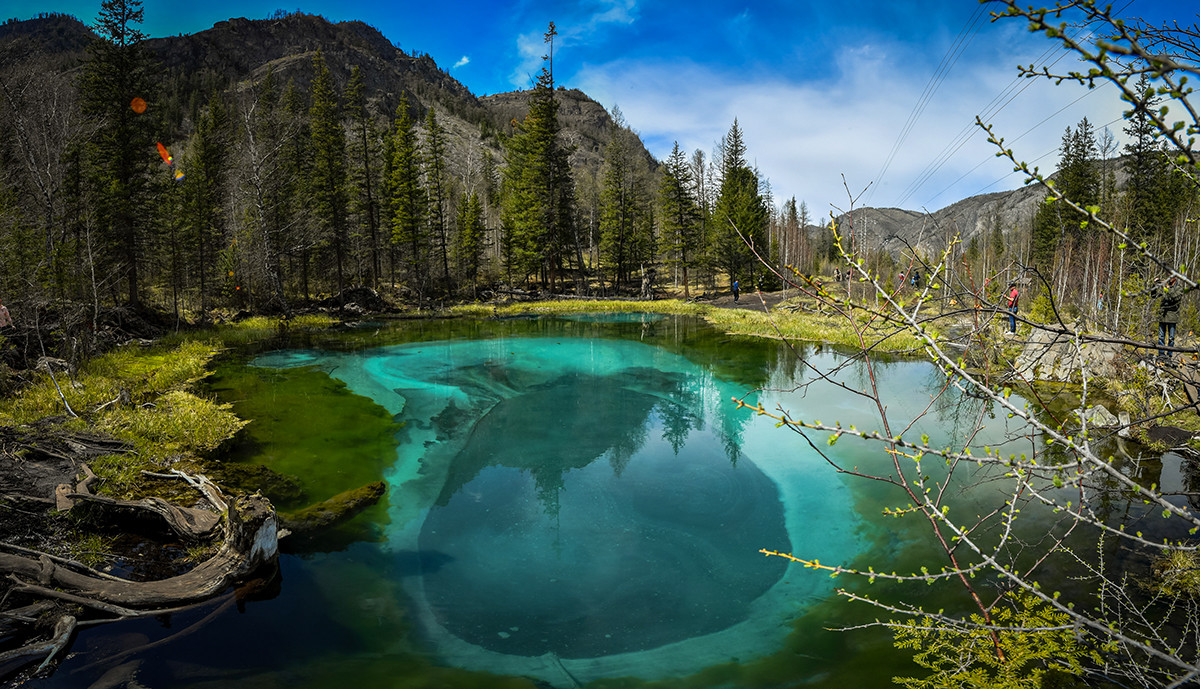 Geyser Lake, also known as Blue (Goluboye) Lake, is located in the south of the Altai Republic, close to the village of Aktash. It gets its vivid blue color thanks to underground geysers, which shoot blue clay onto the surface. The clay diffuses through the water in rings. It’s especially beautiful to watch this from above. 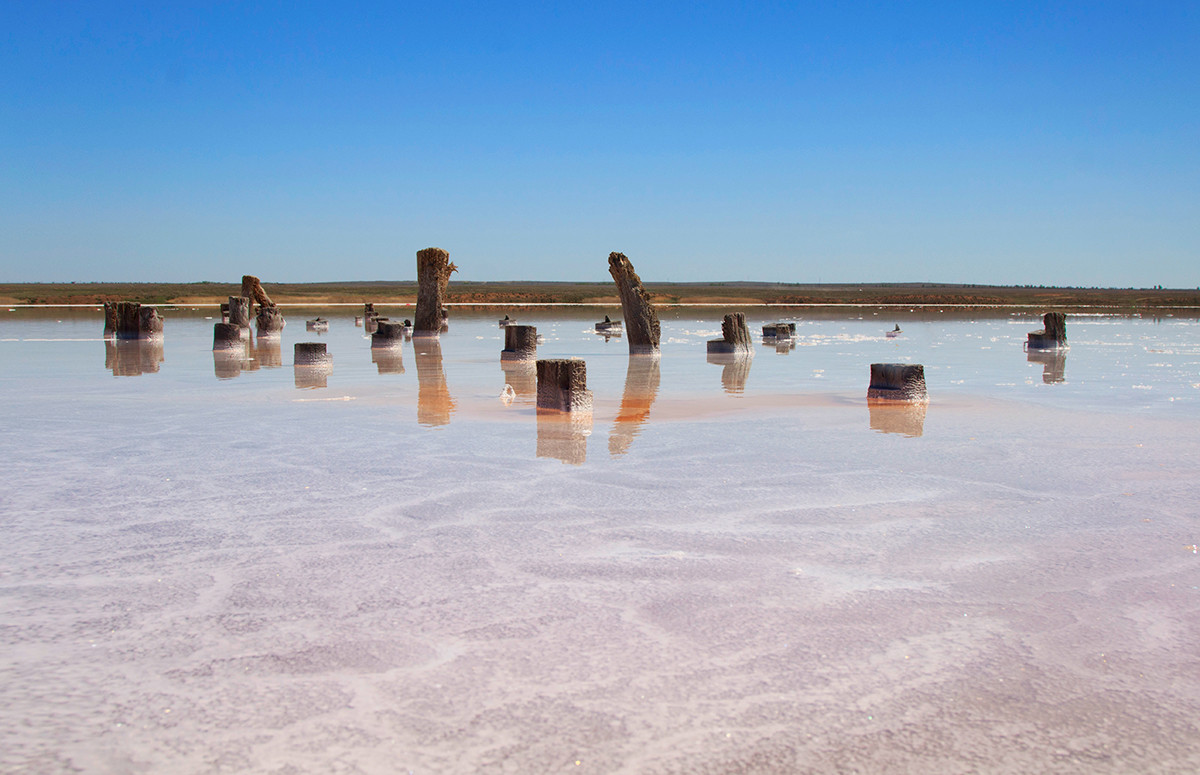 Golden Lake is the largest salt lake in Europe (its area covers over 1502 km., or 93 mi.), is situated in the south of Russia in Volgograd Region. At sunset and sunrise, the lake turns a golden-pink color, as a consequence of the microorganisms Dunaliella salina and the reflection of the sandy lakebed in the clear water. Tourist centers are located on the beach, where everyone wishing to enjoy the beauty of this lake stops.