What was once in place of current Moscow landmarks? (PHOTOS) 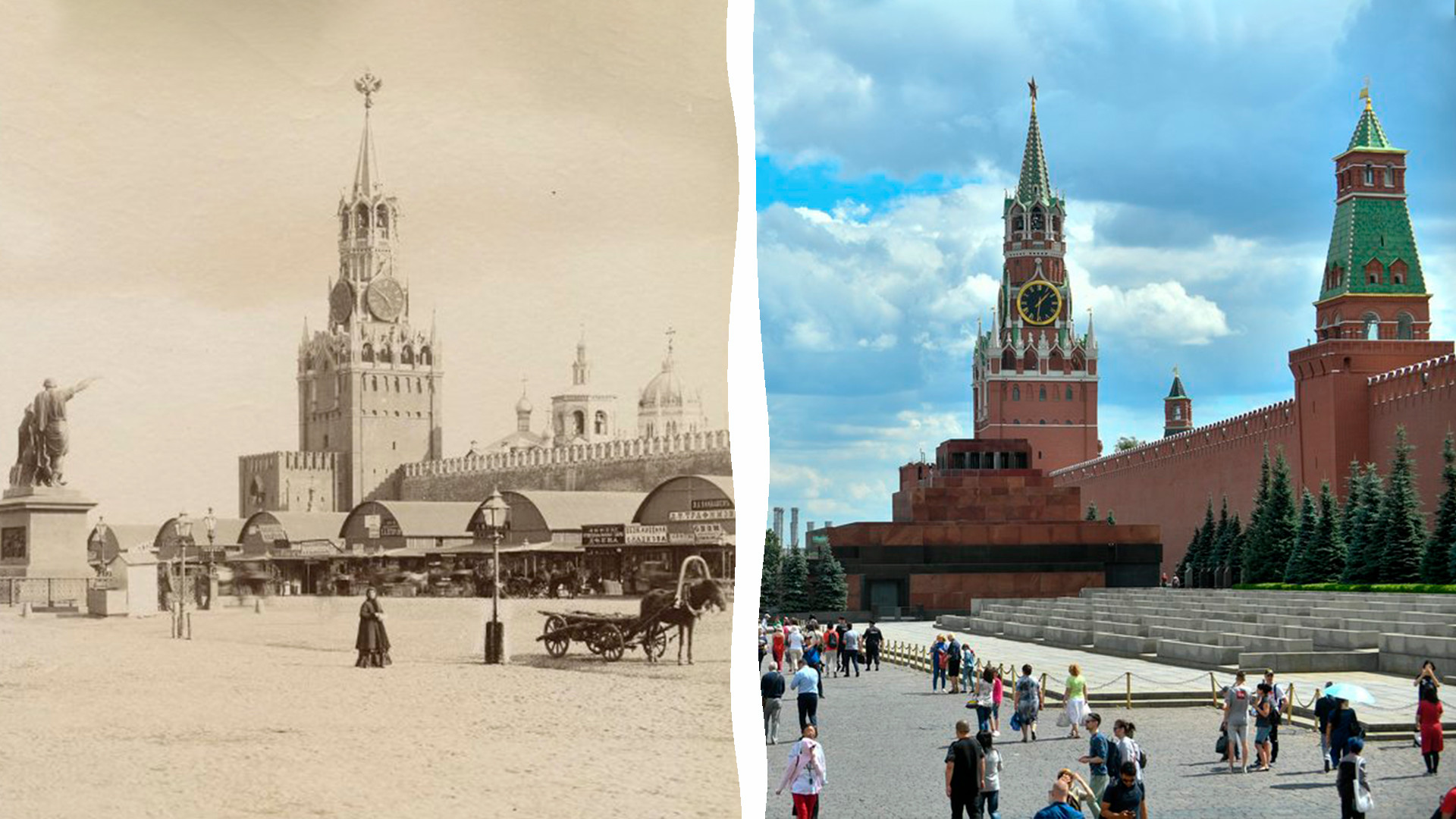 Red Square at the end of the XIX century and today.

1872, just before the demolishing the old pharmacy building; and our days.

One of the most recognizable buildings on the Red Square was constructed in 1872-1883 on the place where the city’s main pharmacy was located. It was a late 17th century building in the Baroque style, used mainly for classes of the Imperial Moscow University (today known as the Moscow State University). By the mid-XIX century, the building had fallen into disrepair and the academic campus moved to neighboring Mokhovaya Street and subsequent plot of land was allocated for the museum.

Left: temporary market near the Kremlin wall, 1886. Right: Red Square in our days.

The tomb of the Russian revolution leader appeared on the country’s main square in 1924. At first, the mausoleum was made of wood and, in 1930, it was replaced with the granite version. During the construction on the Red Square, architects made some changes. So, the monument to Minin and Pozharsky, which stood by the entrance to the GUM, was moved closer to the St. Basil’s Cathedral. In this photo taken in 1886, along the Kremlin wall, you can still see the temporary market that operated while the GUM was being built.

3. Cathedral of Christ the Savior 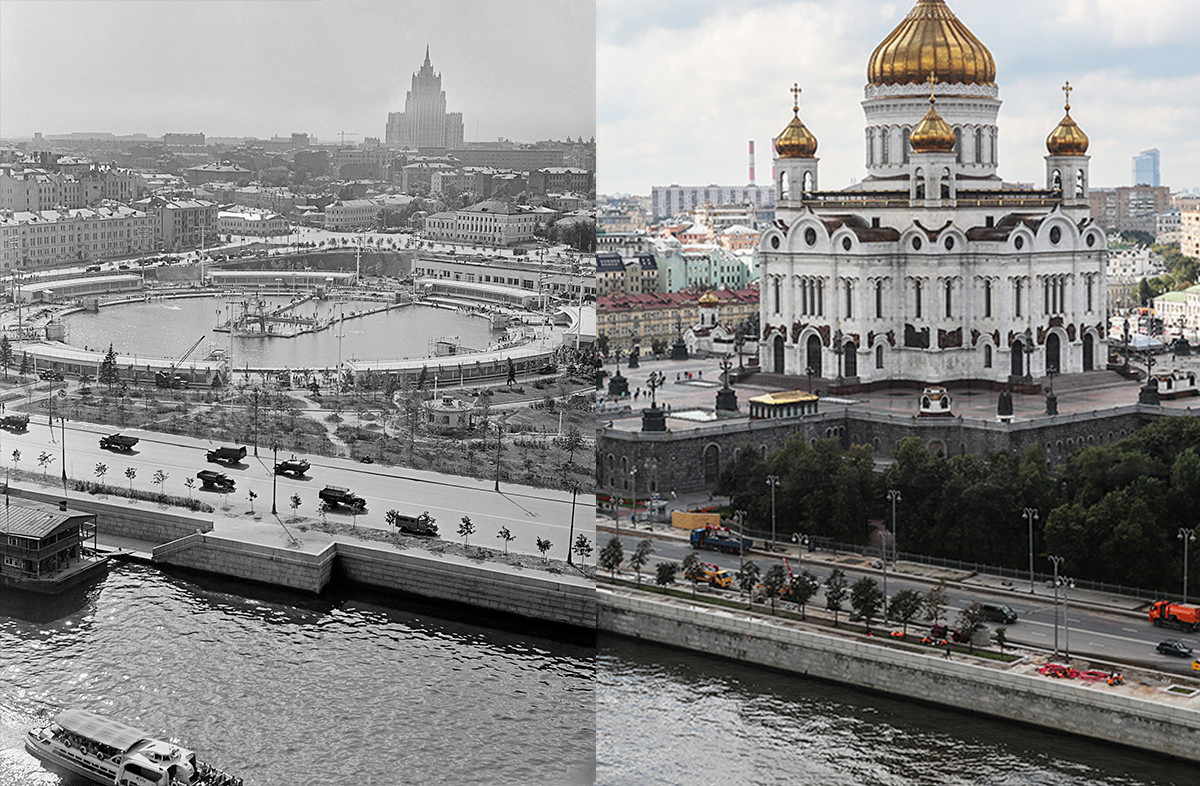 The Cathedral of the Russian Orthodox Church was destroyed in 1931 to make way for the Palace of Soviets. However, this audacious Stalinist high-rise was not realized and, in 1960, the largest Soviet open-air swimming pool was unveiled there instead. In the 1990s, the pool was demolished and a carbon copy of the famous ancient cathedral was built on the site.

Zaryadye district from the Raushskaya embankment in 1890s and Zaryadye Park nowadays.

Just a few years ago, a huge Soviet hotel and a concert hall called ‘Rossiya’ (“Russia”) stood on this plot. In the 1970s, it was one of the largest in the world: 5,300 people could be accommodated here at the same time. In the 1990s, the hotel became unprofitable and it was decided to demolish it and build... another huge hotel. However, after long discussions, the territory right next to the Kremlin and Red Square ended up being turned into a park with a “floating bridge”. The park was named after the historical district of Zaryadye. It opened in 2017.

Another popular attraction is located near the Tretyakov Gallery on Krymsky Val Street. Back in the Soviet times, there was a vernissage of modern artists, but only in 2013 did the embankment become a pedestrian area. A park with fountains, bike paths and “hills” for skaters was installed. Art sellers now display paintings in new kiosks with artsy “wavy” roofs.

This is how this place looked like in 1982 and today.

The business center of the Russian capital, which is visible from almost anywhere in the city, has been under construction since the mid-1990s. Before these skyscrapers, industrial zones and barracks for workers occupied the area. In the 1970s, the Expocenter exhibition hall was built there. And after the collapse of the USSR, city architects suggested turning the site into the business district of the city. Today, there are not only office buildings, but also residential areas, a giant shopping mall (which was built after plans for Europe’s tallest skyscraper were scrapped) and an observation deck on the 89th floor.

The view from the Poklonnaya Hill in the mid-1950s and today.

The monument in honor of the victory over Napoleon was opened in Moscow in 1834; however, in a different place, near the Belorussky railway station. The square near the station was reconstructed in 1936 and the Triumphal gate was dismantled. During the Great Patriotic war, its cast-iron columns were melted down for the needs of the army. In the mid-1960s, a replica of the Triumphal gate was installed on Kutuzovsky Prospekt, next to the new Battle of Borodino museum, dedicated to the Patriotic War of 1812. Some preserved details of the old arch are still preserved in the Museum of Architecture.

And here is how the square near the Belorussky railway station, one of the most beautiful in Moscow, changed. At the end of the 19th century, a tram line passed here, right through the Triumphal gate. Today, a small square with a monument to the writer Maxim Gorky has been arranged. And the tram line now runs around the square.

One of the seven skyscrapers built in the Stalinist Empire style in 1947-1953. Today, it is impossible to imagine Moscow without these skyscrapers! This building is also unique, because the entrance of the Krasnye Vorota metro station is located right inside the building (here’s why).

However, there were also very beautiful views before the skyscraper was built. Until 1927, you could actually see the Krasnye Vorota (“Red Gate”) - a triumphal arch from 1709, erected by order of Peter I in honor of the victory in the Battle of Poltava. It was demolished to widen the street for traffic. Together with the arch, the city also lost the nearby Church of the Three Saints and then, the house where famous poet Mikhail Lermontov was born.

The oldest Moscow museum for science and technology was founded in 1872. It was built in the Russian style near the modern Kitay-Gorod metro station and next to an ancient wall. Previously, a market operated there. However, the wall and market were demolished in 1934 during a major reconstruction of Moscow. Now, a public square with an amphitheater has opened near the museum, but the museum itself is currently under restoration.