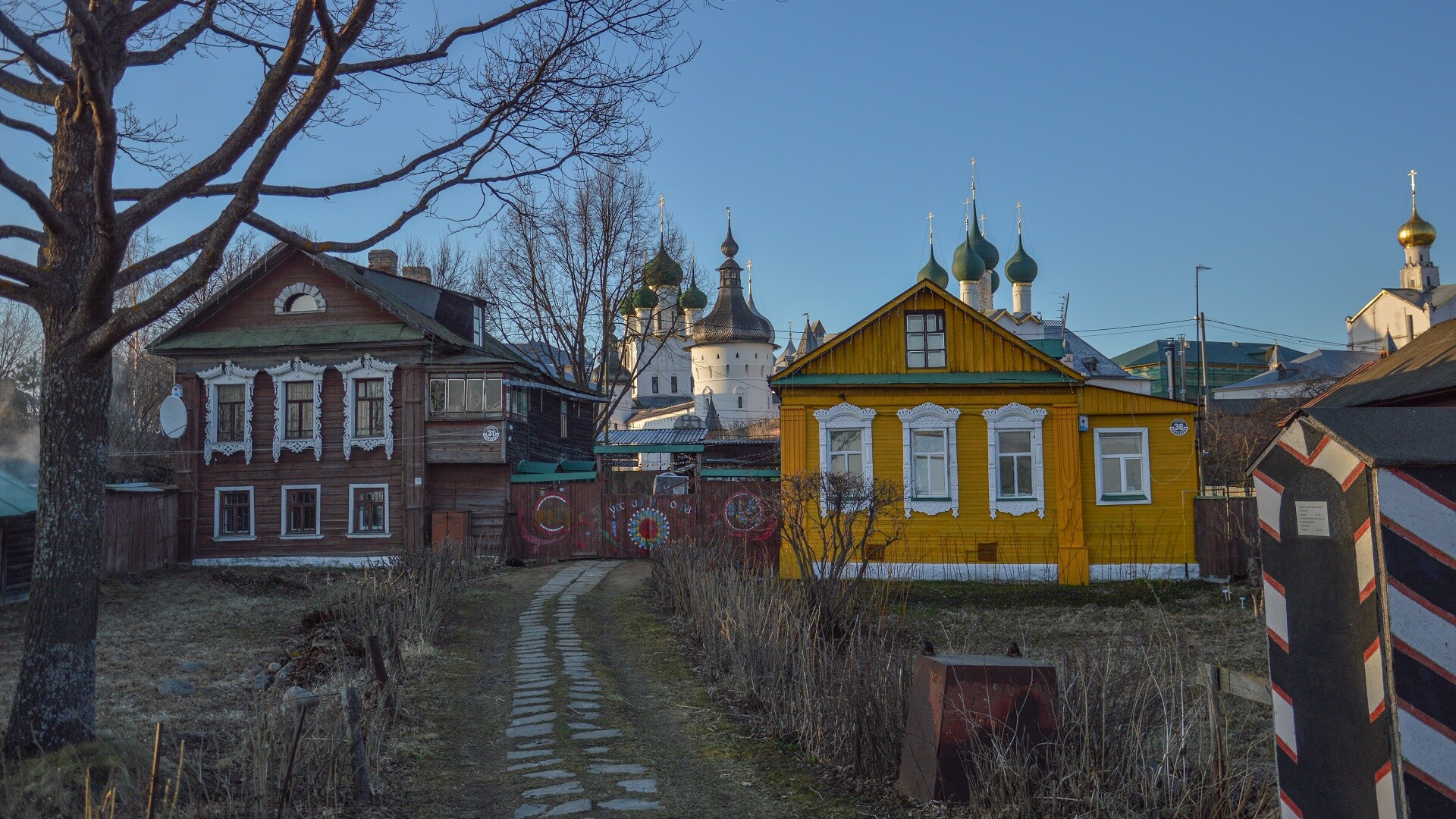 Erwann Pensec
When the bustling pace of the Russian capital becomes too much, sometimes, the only way out leads to the nearest train station platform. At least, that’s how I let myself be whisked away to more peaceful horizons.

Moscow is a cosmopolitan megalopolis, a reflection of the ethnic mosaic that was the USSR and still is Russia. It never ceases to amaze with the beauty of its Art Nouveau style buildings and its pleasant tree-lined alleys with meticulously composed flower beds. But also by the vertigo provoked by its boulevards towered over by imposing Soviet buildings and its monuments almost reaching the clouds. As most agglomerations of its scale, Moscow suffers from incessant noise and permanent agitation. So, it is sometimes necessary to escape in search of some tranquility.

Having been living in the Russian capital for several years, I have, thus, taken the habit of leaving it several times a year: whether it be to the Buddhist lands of Buryatia, the steep mountains of North Ossetia or the icy expanses of the Arctic. However, in this perpetual search for the unusual, I have always neglected the regions close to Moscow, judging them a priori to be “not exotic enough”! So, this time, I decided to discover some of the nearby medieval cities. 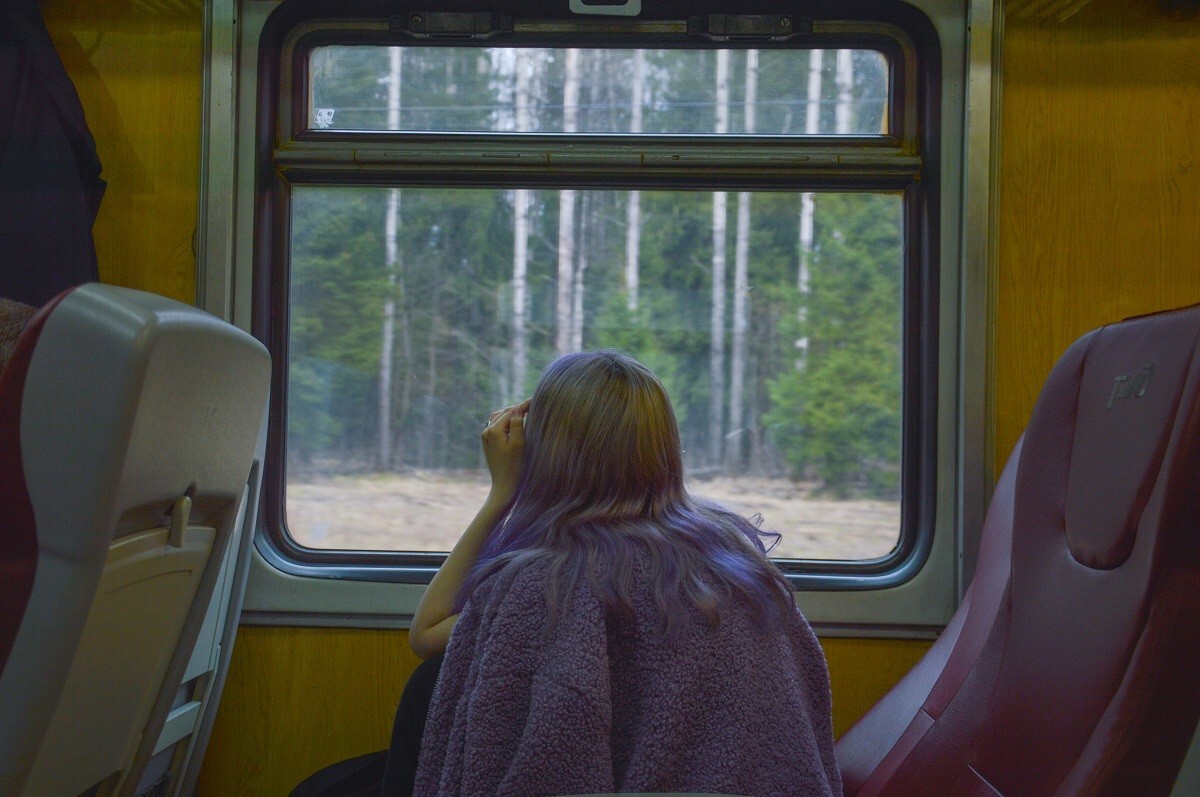 On board the train, as soon as one passes the last buildings of Moscow’s suburbs, one feels time slowing down. Endless forests, still covered this time of year with melting snow. And then, in flashes, tiny chaotic villages appear with wooden walls, tin roofs and dirt roads. 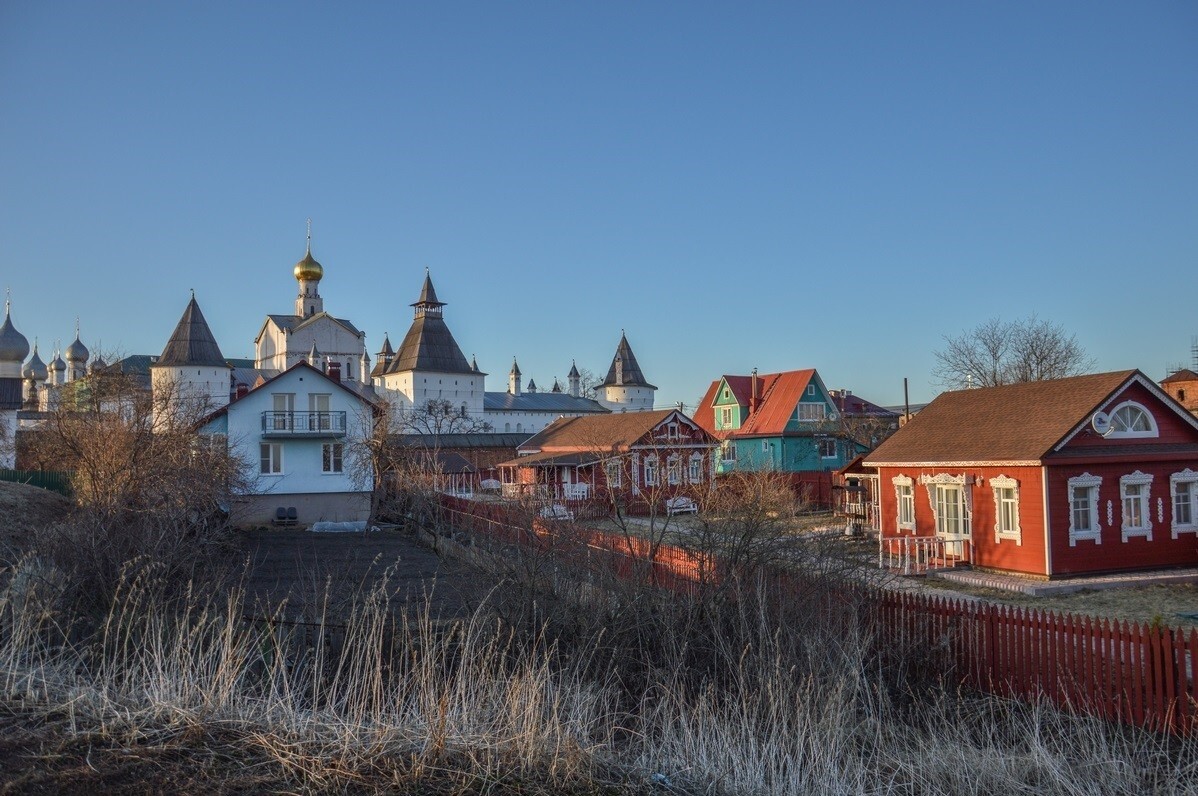 Rostov is one of the oldest cities in central Russia, founded in 862. This small city with roughly 30,000 residents is located about 115 miles (186 km) northeast of Moscow. Its Soviet, and not very aesthetic, station doesn’t mirror the magnificence exhibited not far from its square. 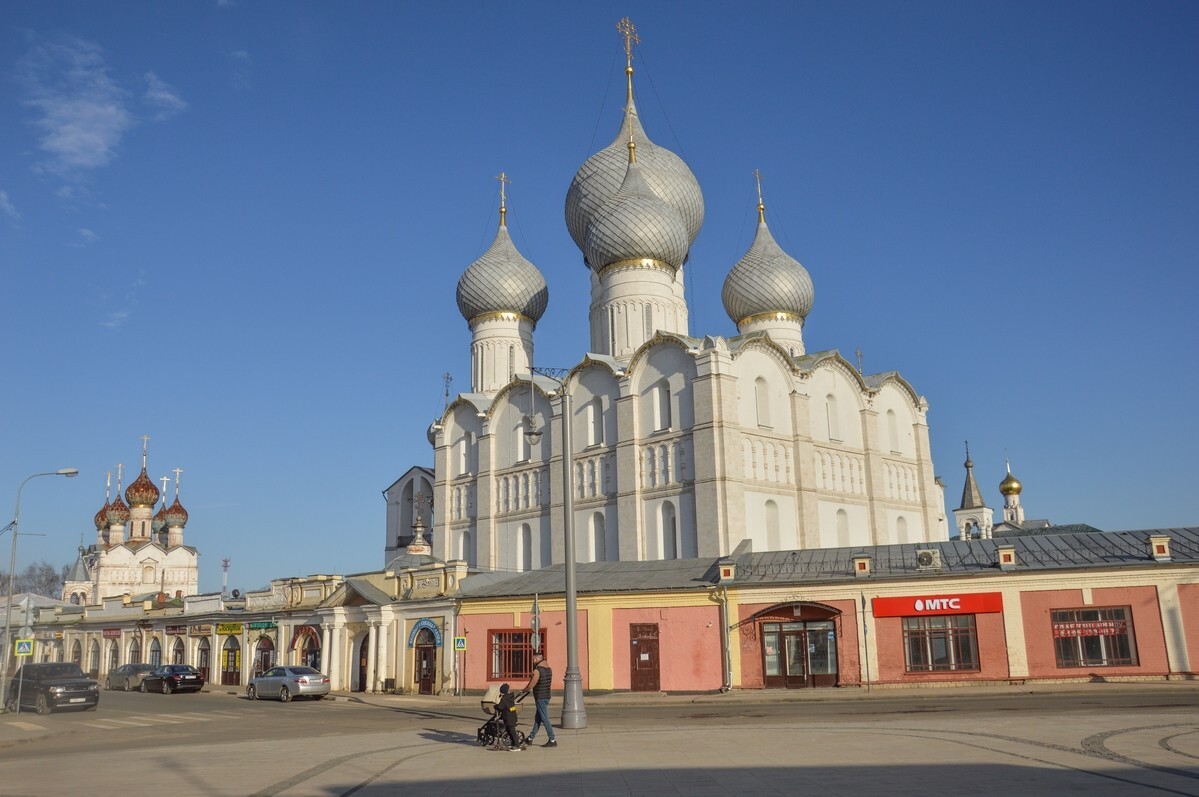 The center leaves little doubt as to the richness of its heritage: from the roof of a row of low and colored buildings protrude gigantic silver onion domes located behind. Stepping onto the newly renovated main square, one can admire the astounding kremlin. With white ramparts and towers of various shapes, this imposing citadel stirs the imagination with its sheer size. 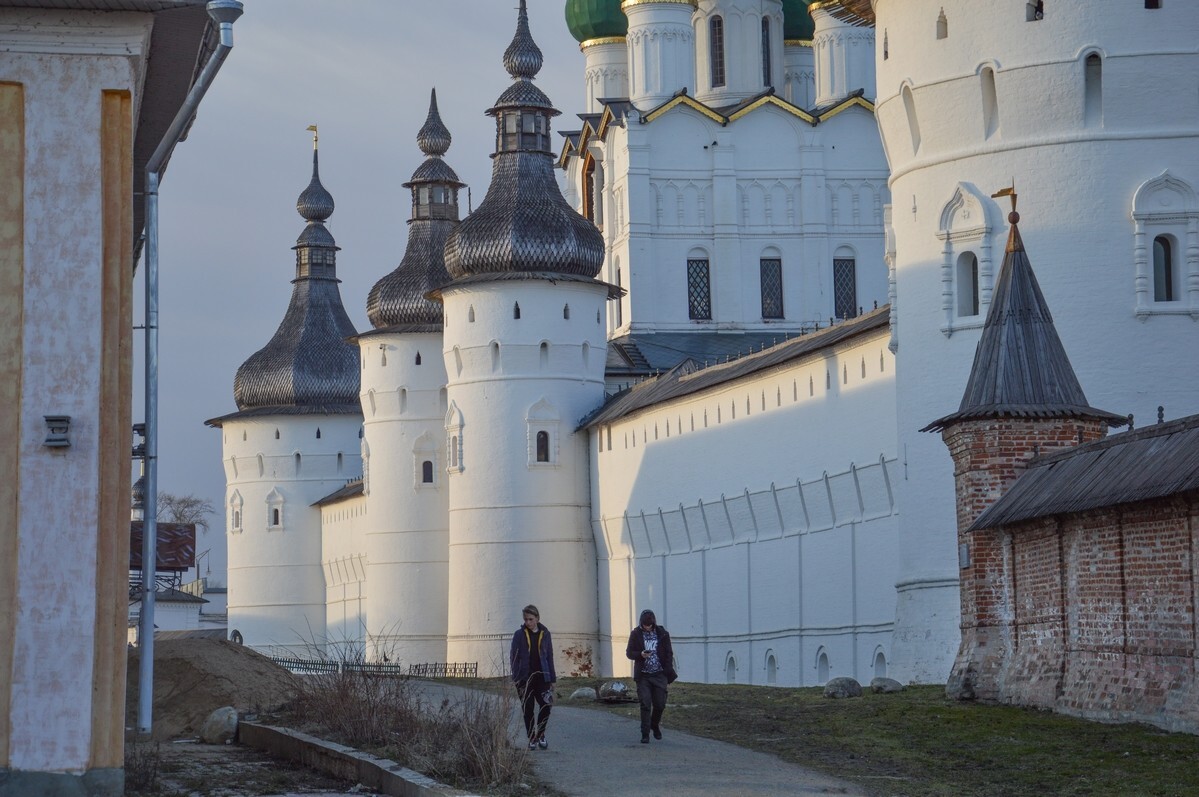 The surrounding buildings, although nowadays housing stores with window fronts seemingly frozen on the eve of the new millennium, still reflect the splendor once displayed by this former princely city of first rank. Sculpted pediments, arcades with sturdy columns and sumptuous churches; the city has no shortage of striking relics of its past glory. 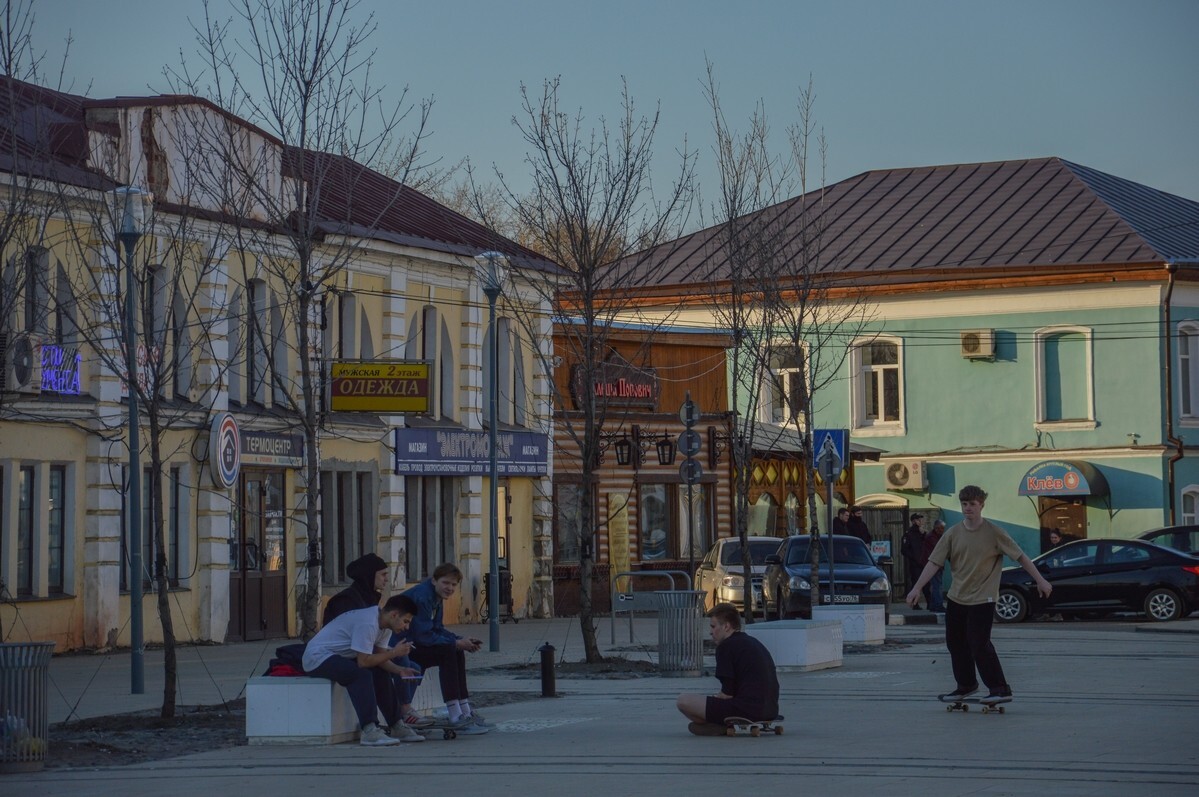 In these first pleasant days of the year, in mid-spring, the city comes alive little by little after a long hibernation. While the locals rediscover the joys of outdoor activities, Lake Nero, on the shore of which Rostov extends, will, in one day, lose the layer of crushed ice which covered it on my arrival. 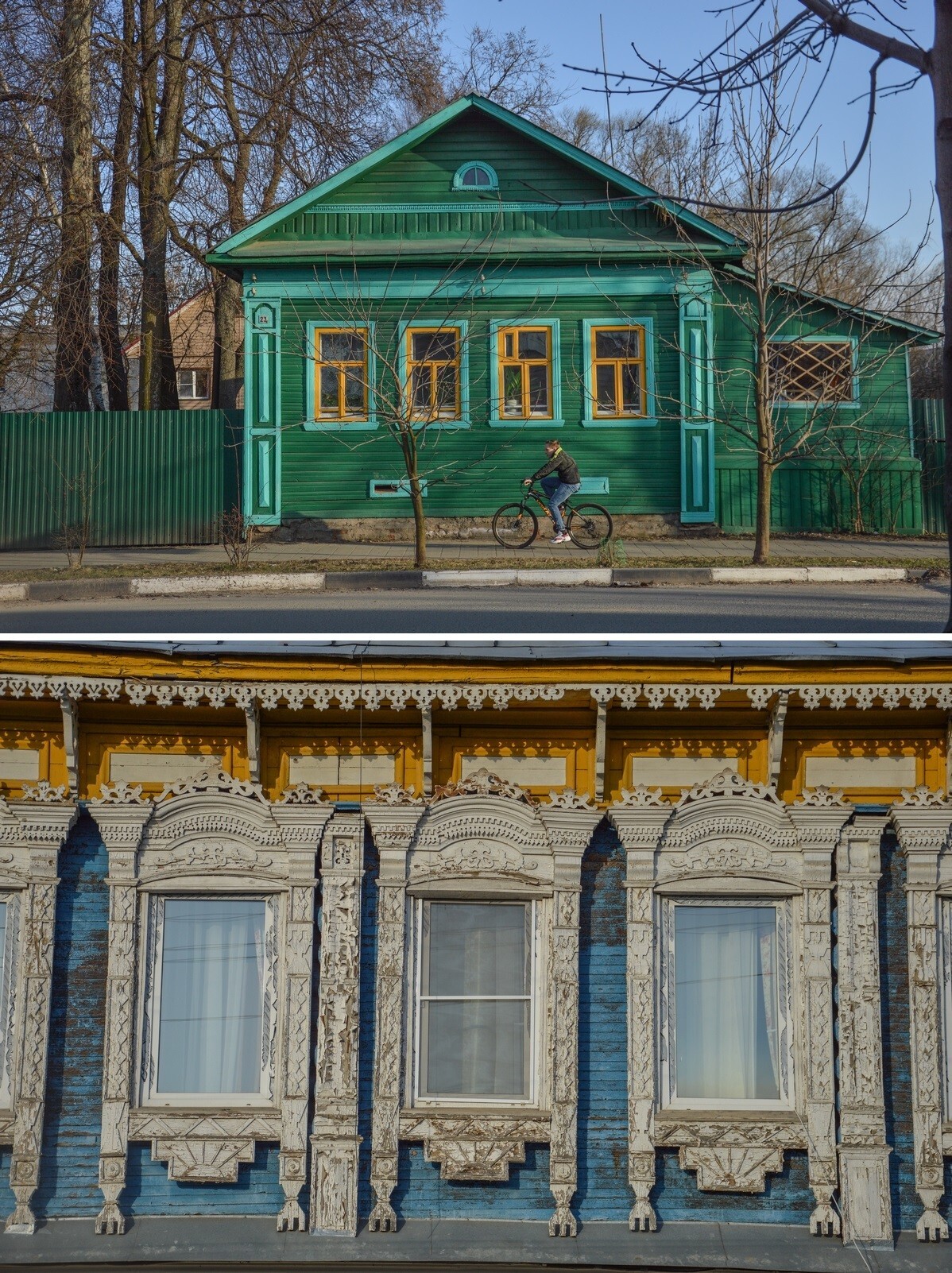 Marveling at these multicolored izbas (traditional Slavic countryside dwellings), with their finely sculpted window frames, while scanning the city from the top of its high bell tower or observing in the distance the monastery standing on the opposite shore, life seems to find its reason here, that of a meditative delight of the present moment.

Yaroslavl, a medieval jewel of tranquility 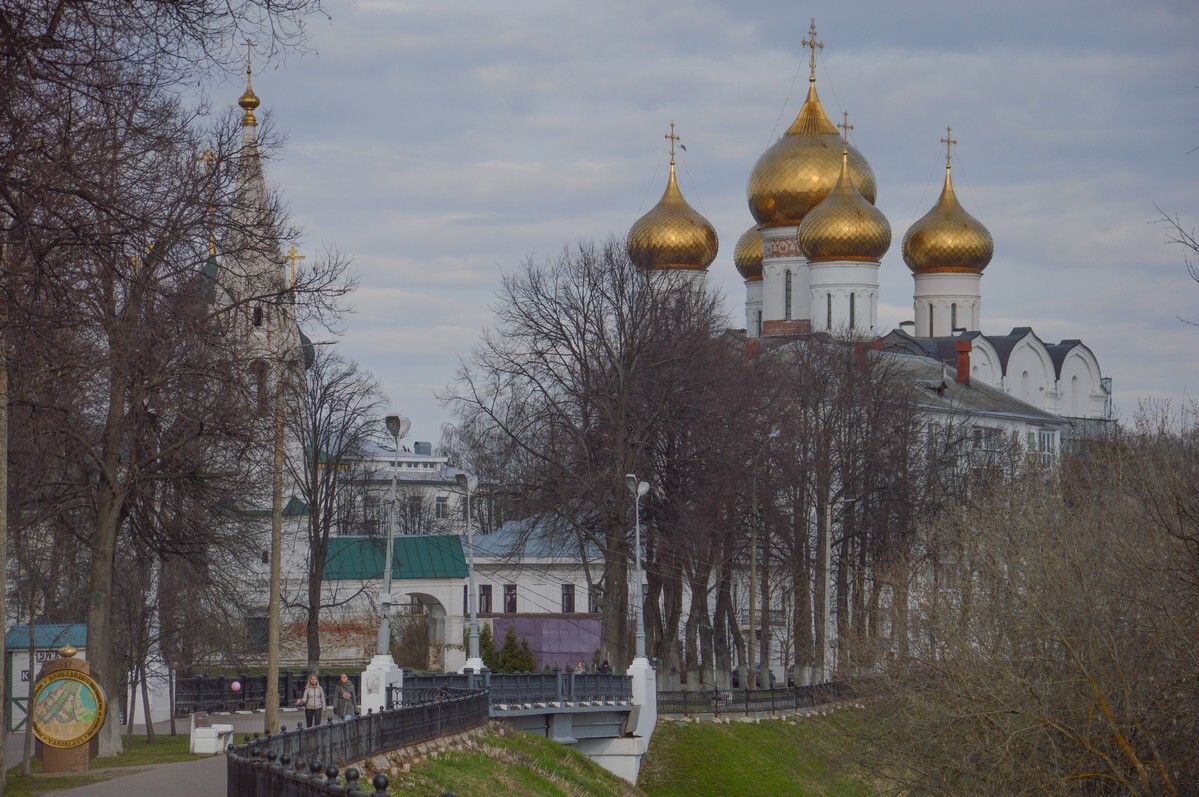 My journey then takes me to Yaroslavl (282 km from Moscow), the majestic “capital” of the Golden Ring tourist route. About 600,000 people live there. 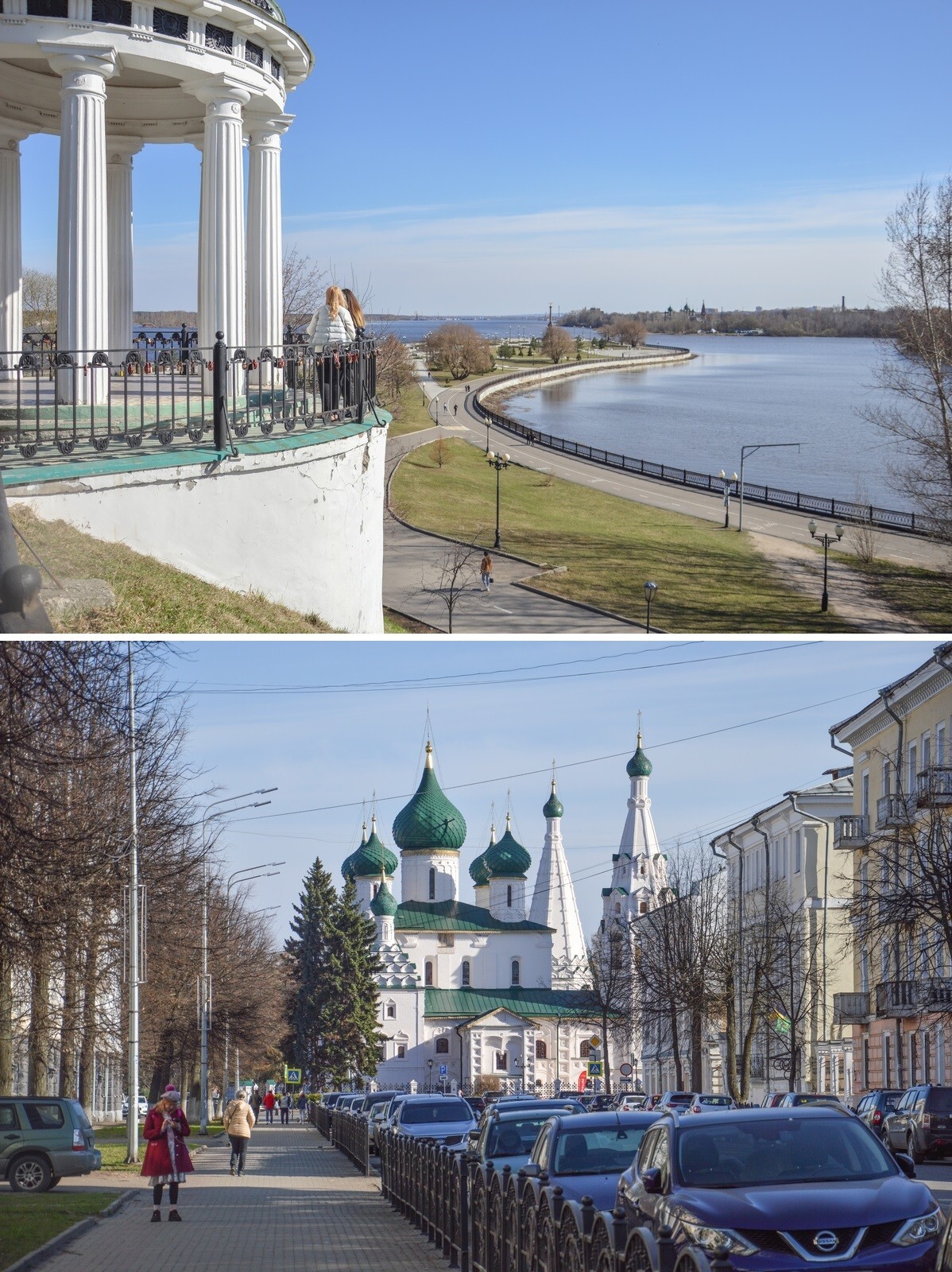 Taking the trolleybus from the station to the city center, I see wide avenues, dotted with shopping malls and other massive buildings, frequented by crowds of people. Checking into my hostel in the night’s darkness, on the high banks of the Volga, I am a bit skeptical. What if it’s another noisy city? 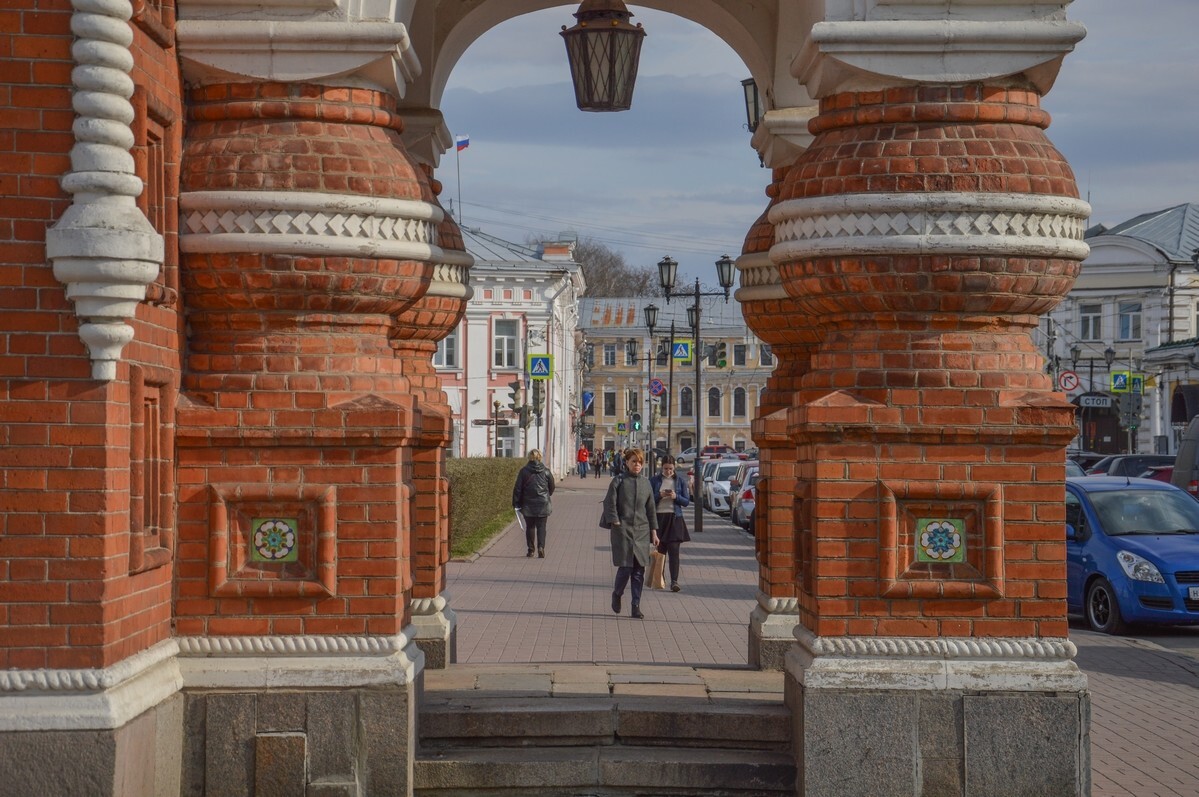 The next morning, though, my doubts are soon dispelled. Exploring the historical center, classified as a UNESCO world heritage site, I find myself amazed. Indeed, unlike other Russian cities, the human frenzy has been cleverly “contained” in the periphery of the city, while the center is characterized by the absence of dense car traffic and noise pollution, by the slow pace of passersby and by its vast pedestrian and green areas. 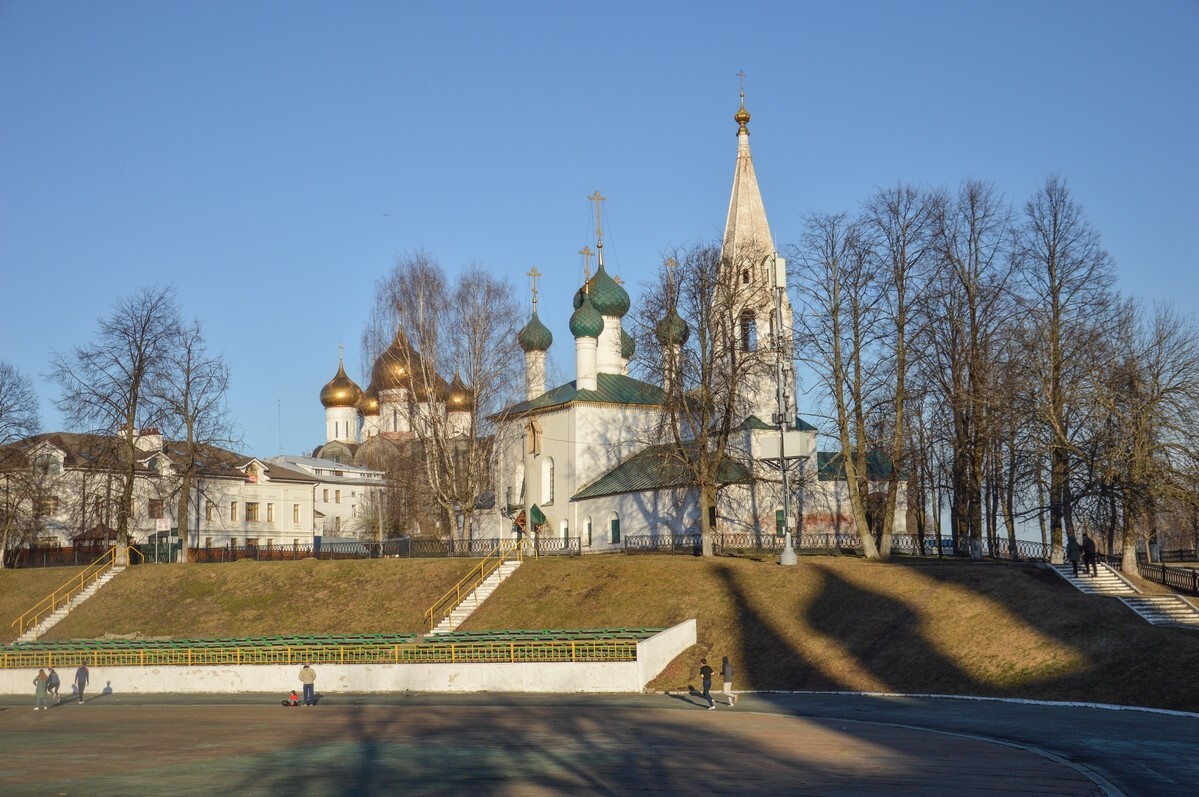 Strolling along its lively streets, charmed by the multitude of cathedrals, chapels and monuments from another age, I imagine the sweetness of life in this city, just three hours by train from Moscow, with all the conveniences of our time, but having managed to preserve a precious serenity in its heart. 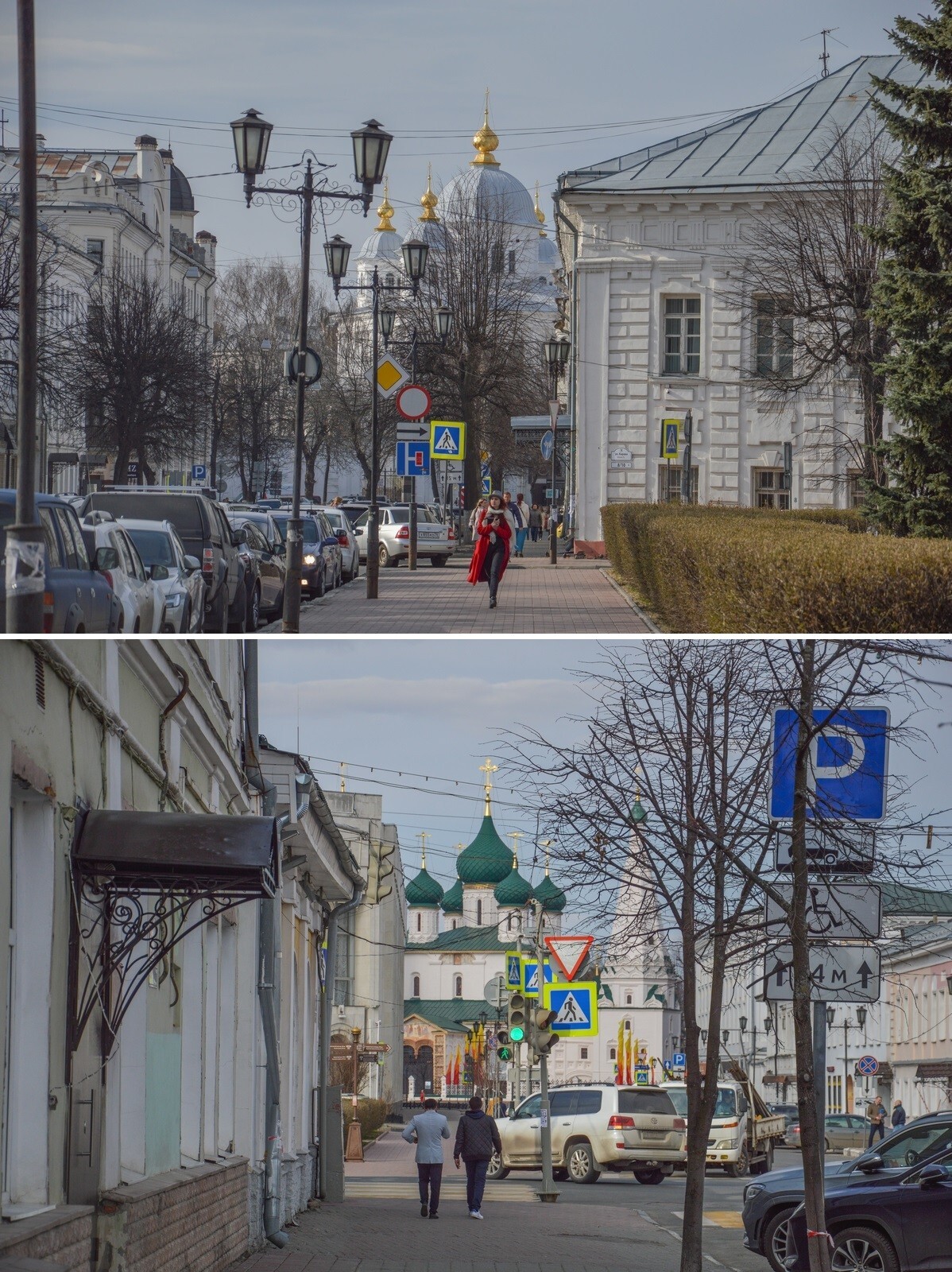 The past prosperity of this former trade and craft center is still evident today. A branch of the famous and prestigious Eliseyev grocery store even still operates here. It is known for its luxurious interiors and ostensibly posh exterior. 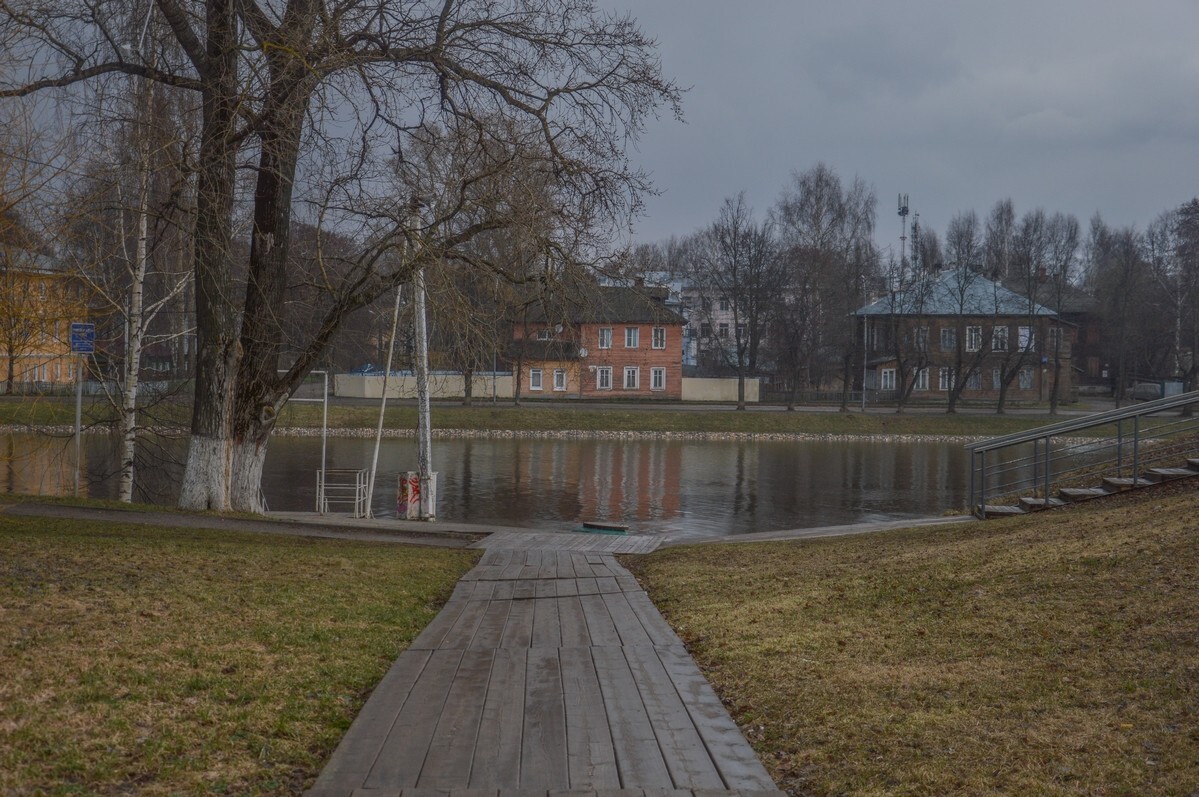 It’s on a misty morning that I continue my exploration 112 miles (180 km) further north from Yaroslav in the districts of Vologda, a city famous for its butter and lace. As the capital of a singularly marshy region, due to high humidity, but also an exceptional heritage, protected over the centuries from enemy assaults by this natural barrier. 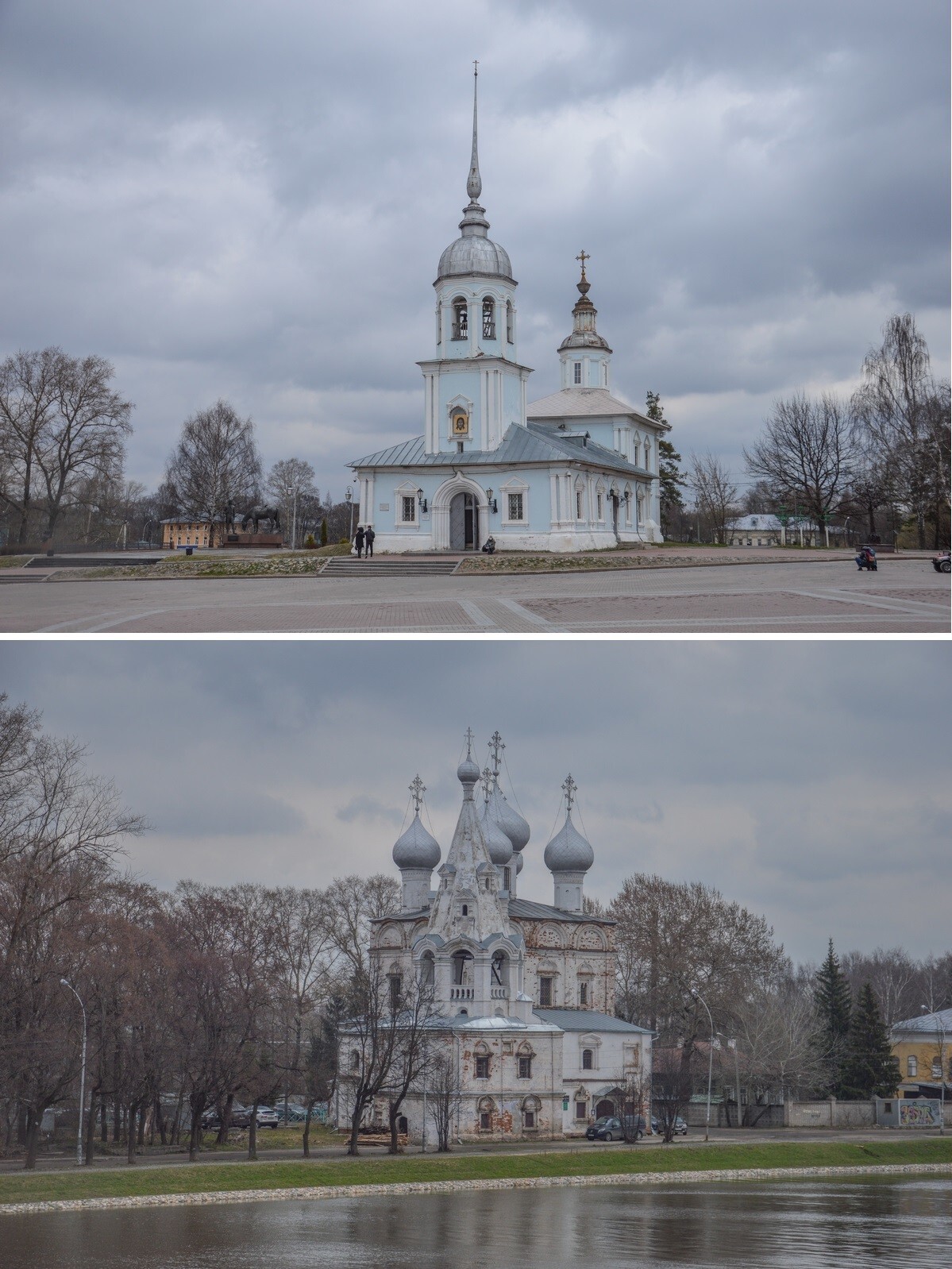 After having crossed a paved bridge, equipped with a strange digital panel indicating the ambient radioactivity level, a breathtaking view is offered to my eyes. Flanked by high and thick white ramparts, the Kremlin of Vologda appears before me. Going around the square to reach the entrance, I am awed by the beauty of it. An elegant architectural complex in pastel tones stands in front of me. 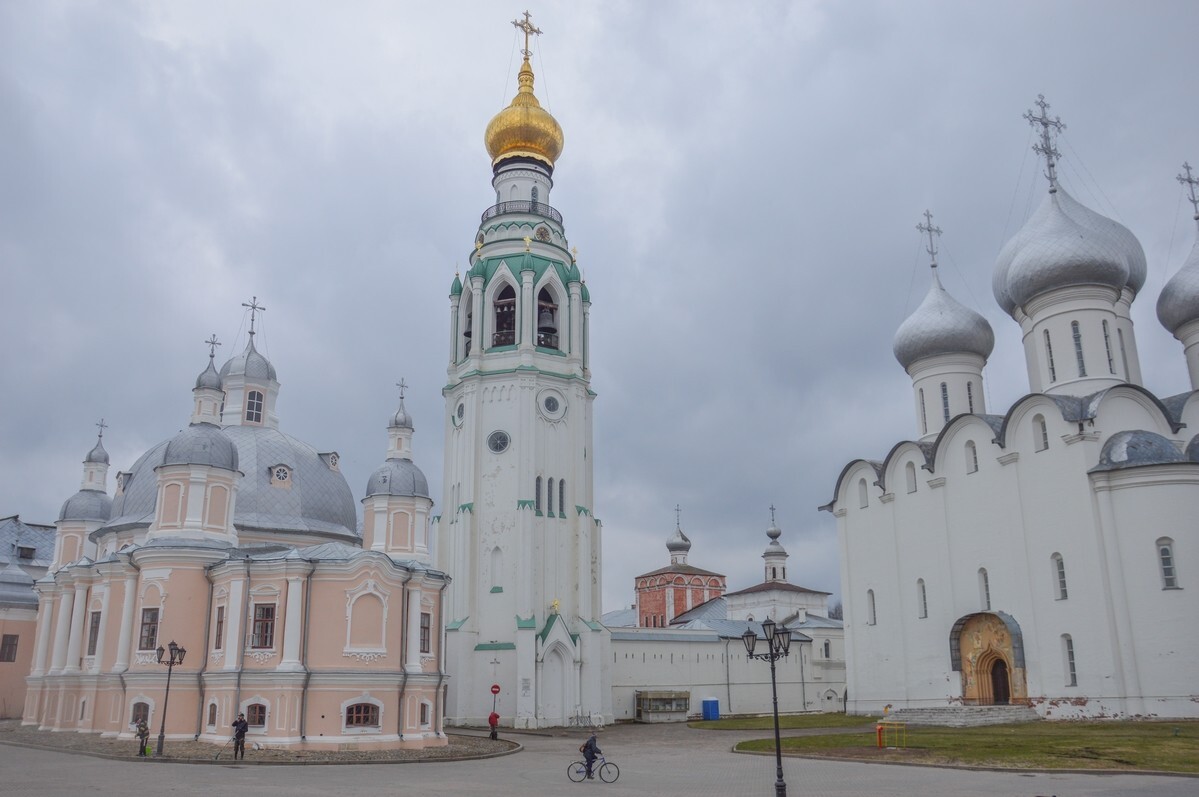 What makes the fame of this city of 300,000 residents, founded in the middle of the 12th century, are, however, the innumerable wooden houses. Some of them, embellished with window frames, fences and other skilfully carved elements, seem to be the work of a lifetime. This art, far from disappearing, even seeing a revival, considering the multiple renovation and even construction sites in progress in the surrounding areas. 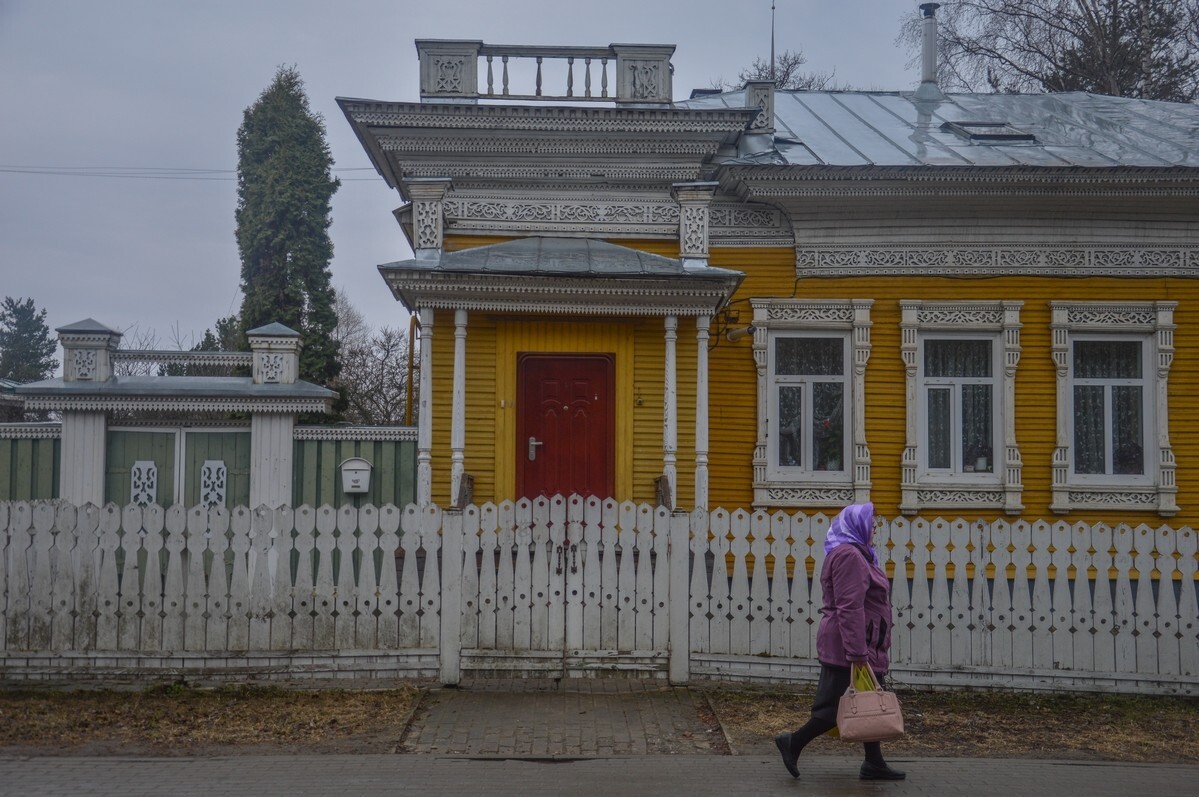 On a windowsill, a red cat is lounging, watching the passersby who, like me, are enjoying their walk, despite the drizzle and the penetrating cold. While some are feeding gluttonous pigeons, others contemplate, dreamily, the winding and still wild banks. Finally, taking refuge in the warmth of a café that was very much on par with its Moscow counterparts, I note that outside, even the rain, which is now beating down, is incapable of hurrying the locals’ steps. 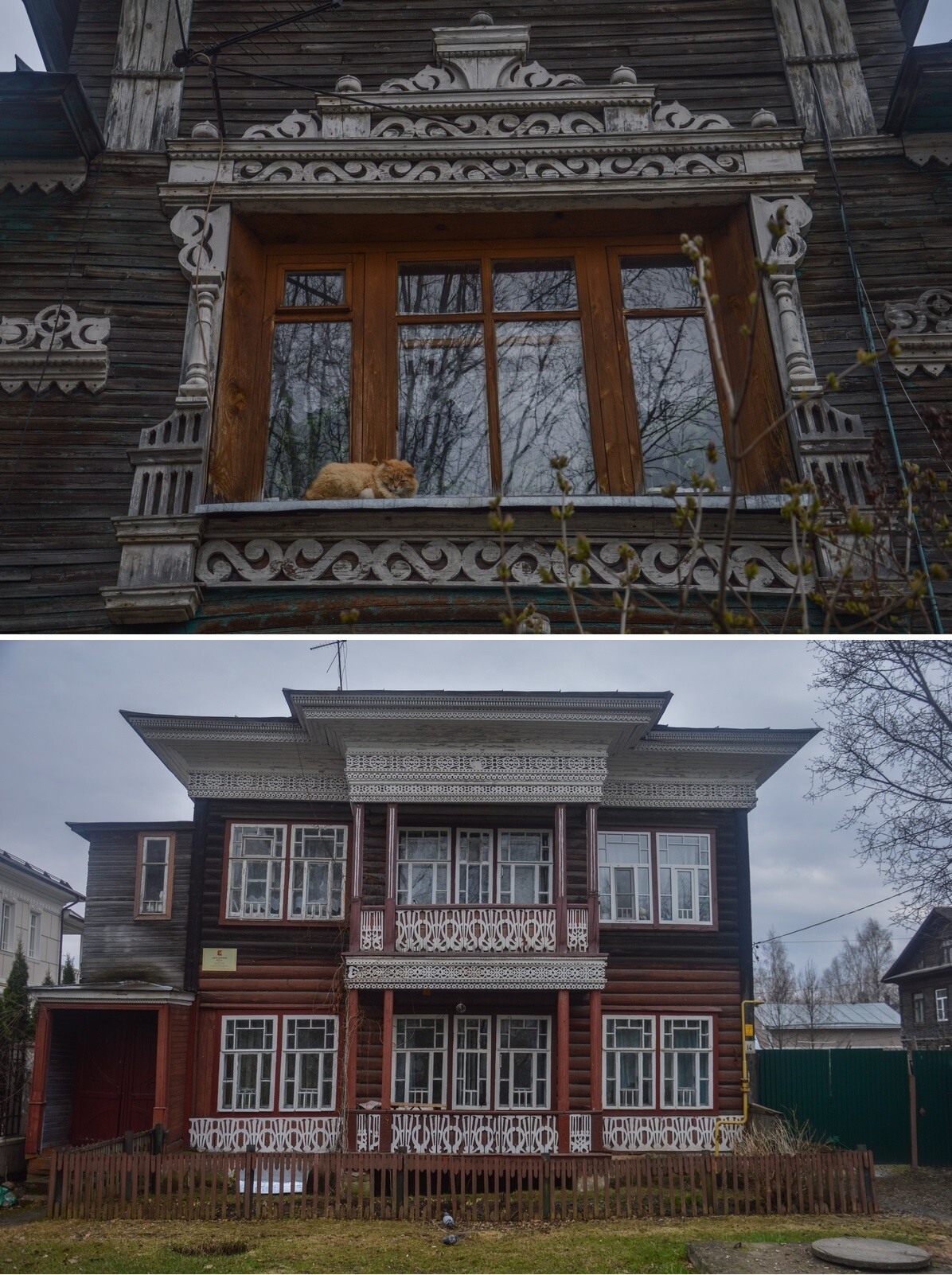 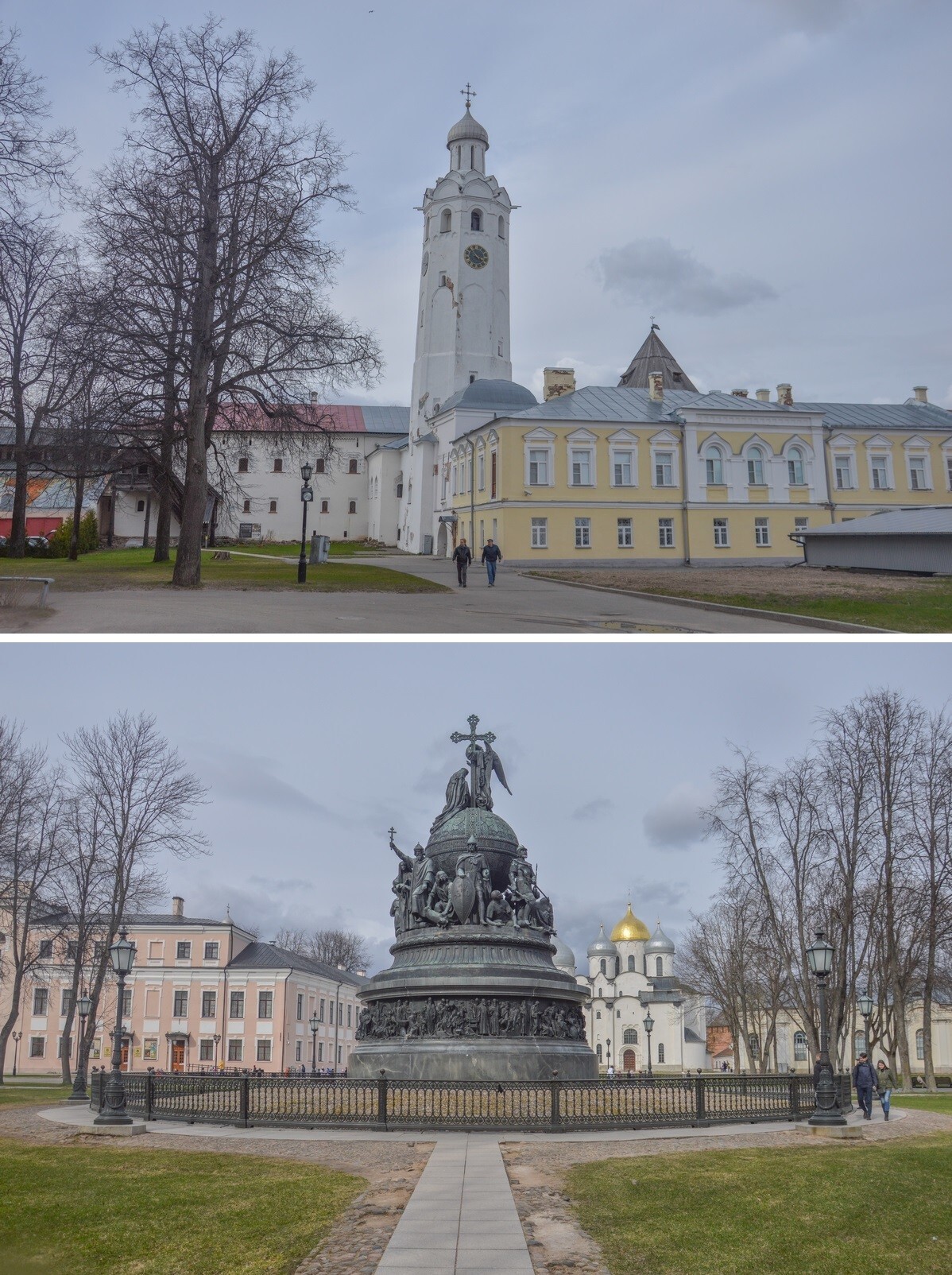 The final stop on my itinerary is Veliky Novgorod, the capital of an ancient state that once governed (from 1136 to 1478) a vast territory in the north of present-day Russia, from the Baltic to the Urals. At that time, it was a member of the Hanseatic League, an association that brought together a circle of merchant cities in northern Europe, including Hamburg, Gdansk, Stockholm, Bruges and London. 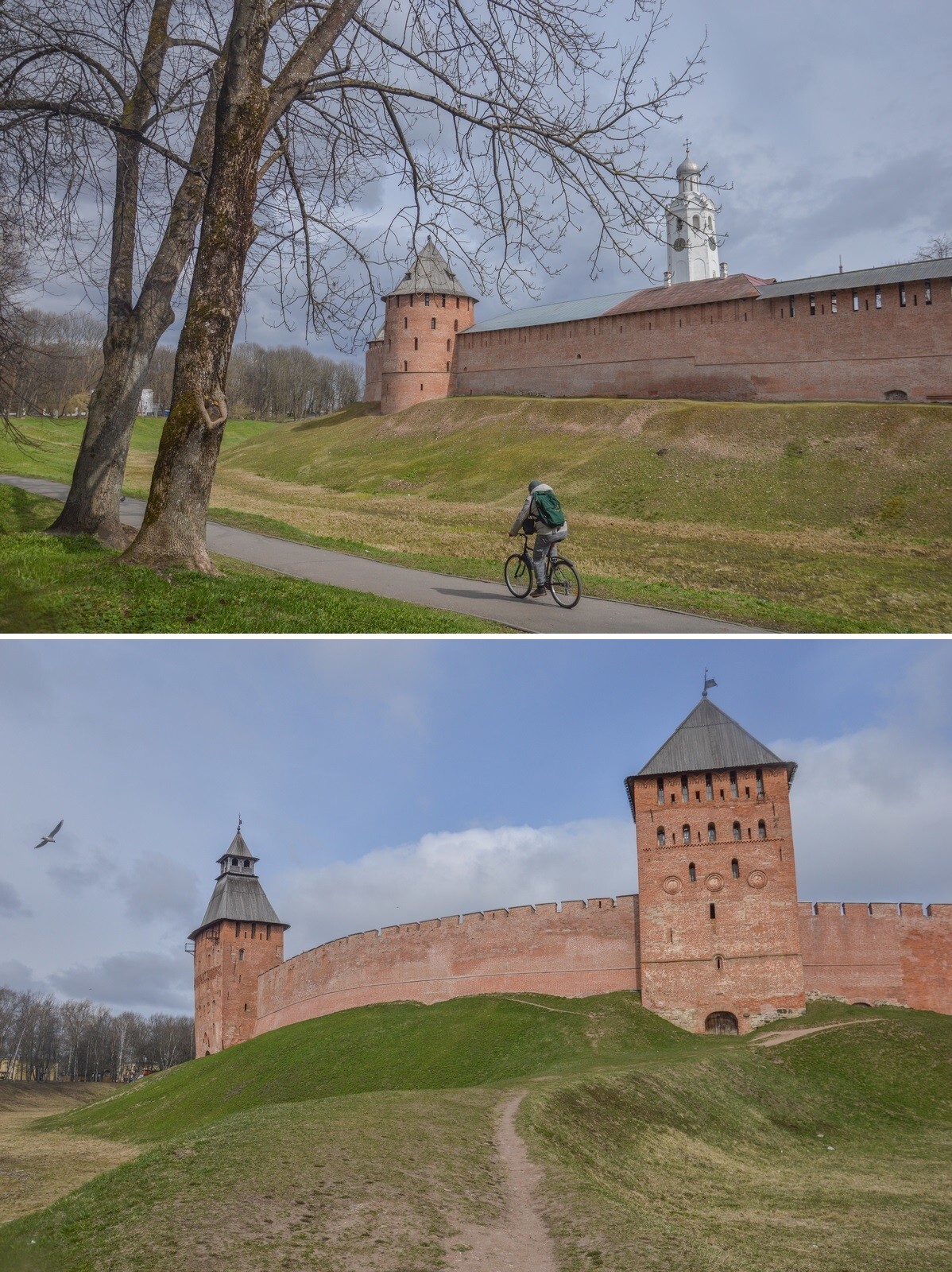 Some vestiges of this power still remain, such as the local kremlin, surrounded by a deep moat, and the merchant quarter, with its arcades and numerous centuries-old buildings. The high status of this city is also reflected in its white cathedrals and churches, which are among the oldest in the country. 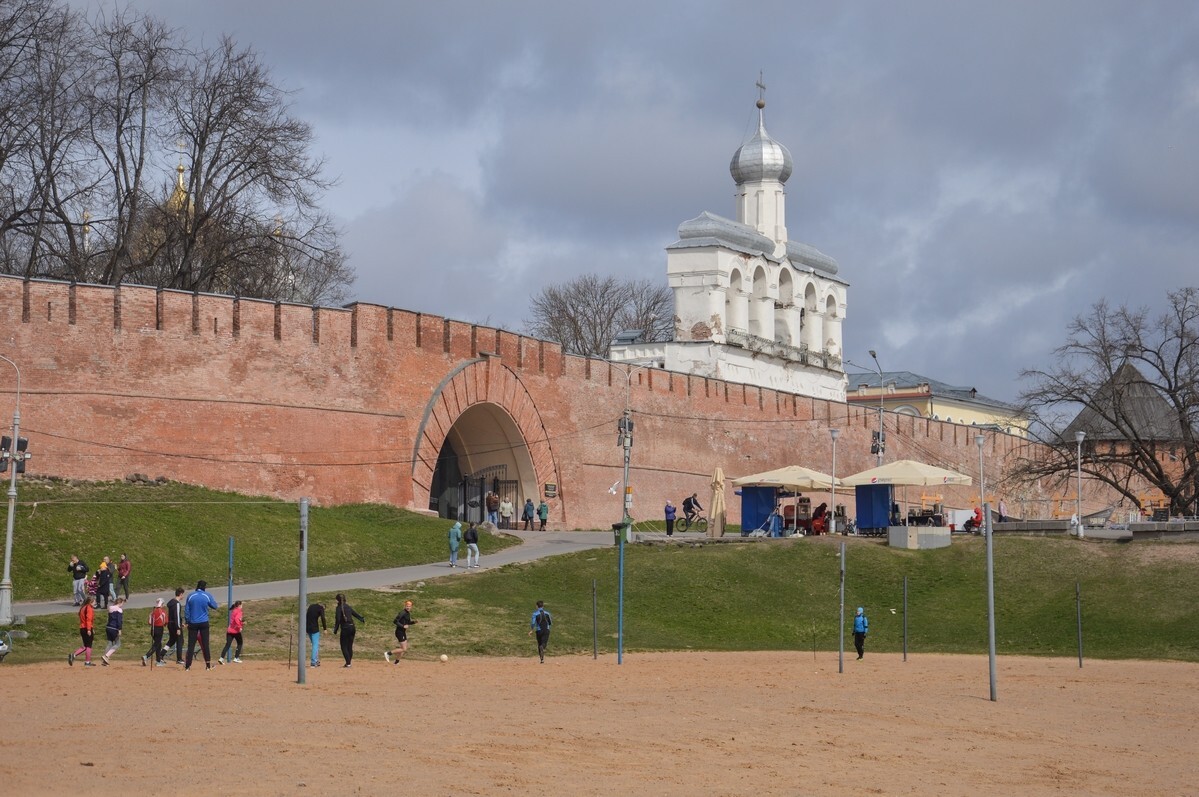 However, while an accordionist animates the surroundings with his ritournelle and young people are playing ball on the sandy beach along the fortress, this picturesque liveliness gives me an ominous feeling. Moving away from this museum-like hyper-center, where a few people wander around, it is, despite its 225,000 inhabitants, an inert city that presents itself accordingly. In the deserted streets and squares, a serene silence reigns. The activity seems to be suspended. For the first time, I think I’m touching on that feeling that is so typical of Russia – the toska, the nostalgia of what has not happened and will (probably) not happen either. 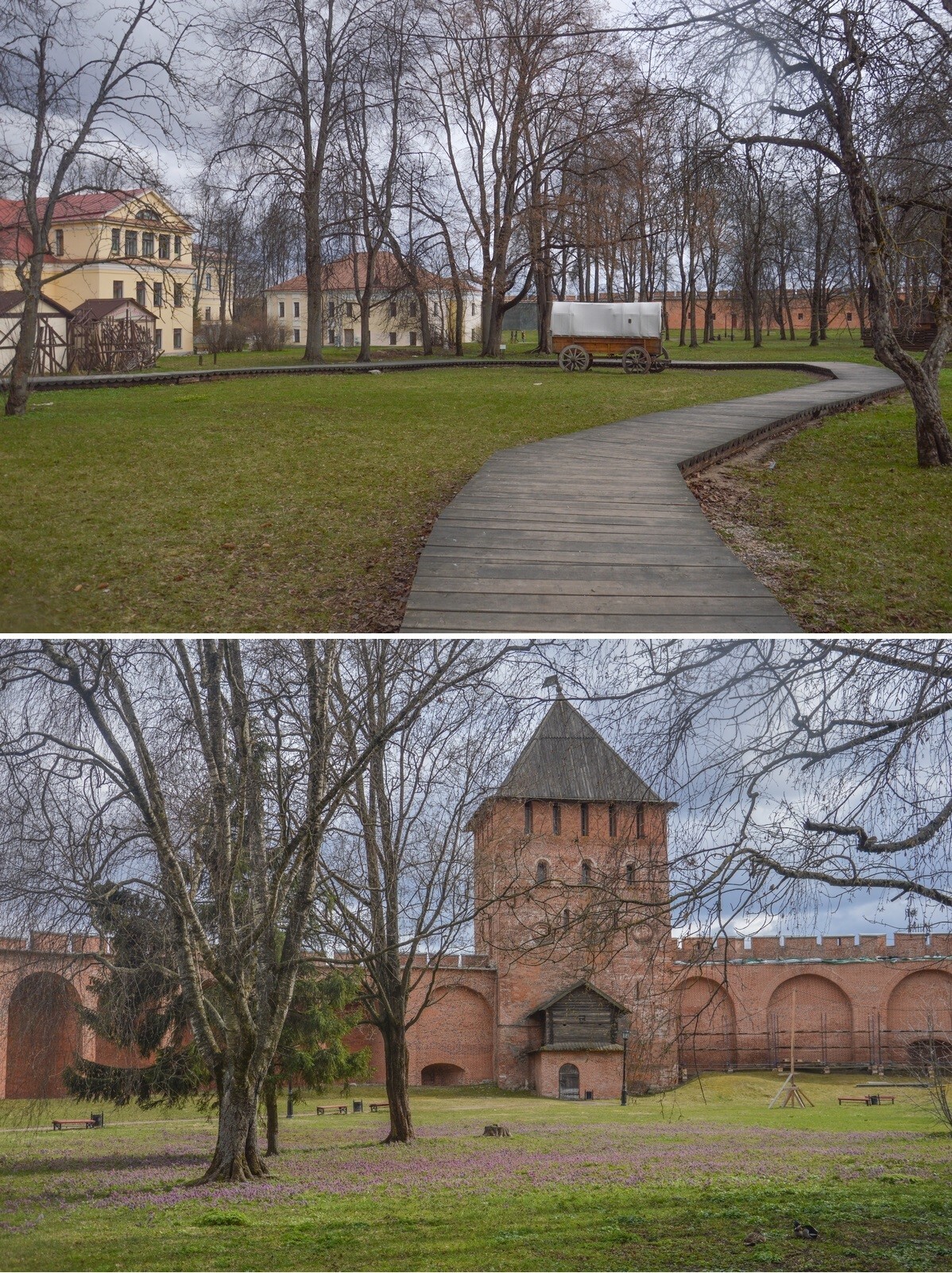 The next day, I meet the dawn at the railway station in Moscow with astonishing joy. It is already crowded despite the early morning. The rush of the subway, the hurry of some, the noise of others... Could it be that I missed all this? 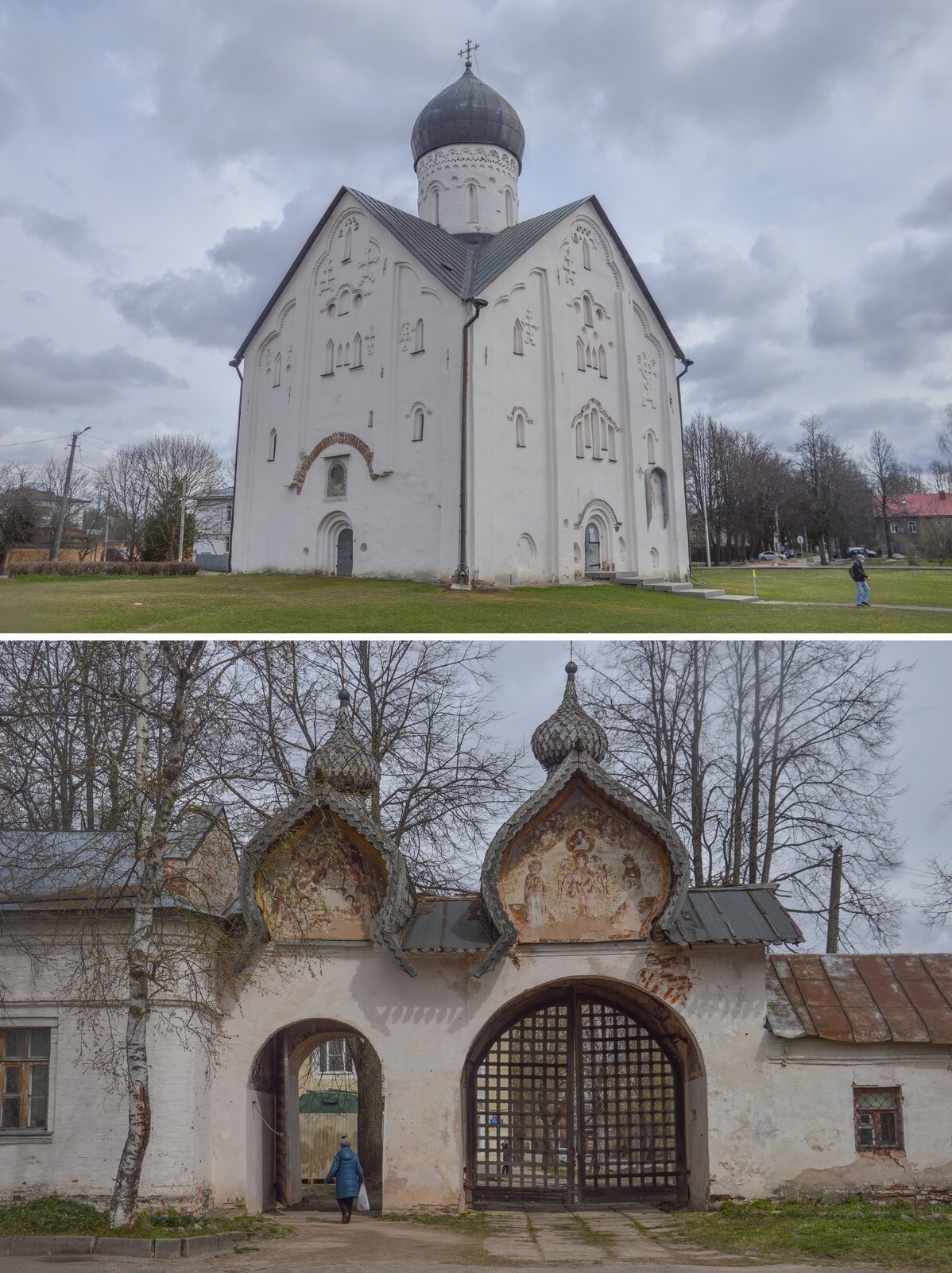