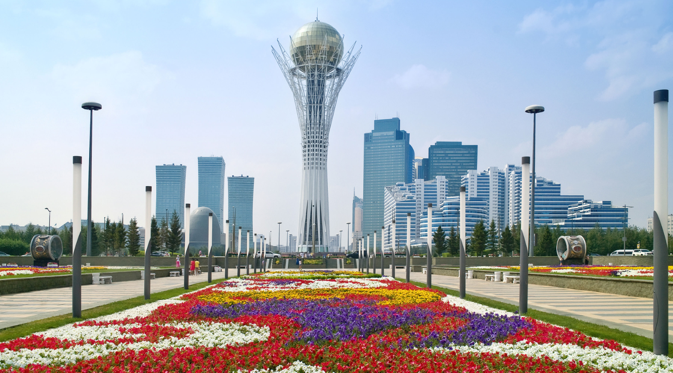 Facing an uncertain future for the Russian language and dim economic prospects, a growing number of ethnic Russians are emigrating from former Soviet Central Asian republics.

Former Soviet republics in Central Asia are turning more and more into mono-ethnic countries, as a large number of ethnic Russians leave for greener pastures.

During the Soviet days, Kazakhstan, Kyrgyzstan, Uzbekistan, Tajikistan and Turkmenistan were all multi-ethnic. This was in the large part due to the Russian speakers living there. The term Russians actually refers to representatives of other Slavic peoples as well – in the first place Ukrainians and Belarusians.

Today the situation has changed dramatically – Russians in the region constitute a small percentage of the population. The peak of the exodus of the Russian-speaking population in the region took place in the 1990s, after the collapse of the Soviet Union and the subsequent deterioration of the socio-economic situation, when almost everywhere ethnic friction started. In the early post-Soviet years, out of the almost 10 million Russian-speaking residents in Central Asian countries, less than 3 million remained. However, the migration processes has not ended yet.

Kazakhstan is the leader in the number of Russians wishing to leave the country – this despite the fact that Kazakhstan is a strategic partner of Russia, and a core member of the future Eurasian Economic Union. The main reasons that are pushing Russians from Kazakhstan are: in 50 percent of the cases, lack of opportunities for children, in 40 percent of the cases it is the language policy that people do not like, and almost the same amount – 37 percent say it is lack of prospects for decent wages, and 33 percent – lack of confidence in bright future.

Head of Information and Research Center (IRC), Russian commentator Fyodor Miroglov told the author that Russians in Central Asia primarily face discrimination based on ethnicity. In Kazakhstan, this is expressed mainly in personnel policies – more than 90 percent of executives of the country are representatives of the dominant ethnic group, as well as an attempt to limit or minimize the use of the Russian language in everyday life. At the same time, paradoxically, this is not possible, as very soon it became clear that the Kazakh language cannot fully replace Russian in science, law, and some other areas.

After the events in Ukraine, in particular, in the southeastern part of that country, where people rose up in protests, the President of Kazakhstan Nursultan Nazarbayev drew attention to this issue. He, in particular, recalled: “In the Constitution it is clearly stated: all discrimination is prohibited based on a person’s religious, ethnic, or linguistic heritage.” At the same time, the Kazakh leader said that the Kazakh language is the state language and in the future all inhabitants of the country should know it, and very soon, this issue will not present a problem, “Children learn everything quickly. That is when the children, as I said, by 2025, will graduate after completing education from the 1st to the 10th grades – and then there will be another conversation,” Nazarbayev said. “Questions of inter-ethnic relations are a thin membrane. The supremacy of one group over another has never led to anything good. We all know this well.” According to Fyodor Miroglov, Russians, on the whole, find it easy to live in Kazakhstan, if they have no major career ambitions.

The share of Russians in Kyrgyzstan today is about 7 percent of the total population, while in the Soviet era this figure was 25 percent. Russians first began to settle in what is now Kyrgyzstan in the years 1850-1860, after the Kyrgyz lands were added to the Russian Empire. At the same time, and this is when the first skirmishes began between the local population and Russian colonists, to whom the Tsarist government granted fertile lands. Since then, these skirmishes have not ended. The last one occurred four years ago, after the latest revolution on April 7, 2010. At that time, programs were carried out in the Russian villages of Mayevka and Aleksandrovka, connected to land seizures. That conflict was neutralized, but the Russian population there has no guarantees that this will not happen again.

The overwhelming majority of Russians in Kyrgyzstan live in the north of the country, in the city of Bishkek and Chuy Province, near Lake Issyk-Kul. The Kyrgyz capital city is still a predominantly Russian-speaking city. Although the major share of Russians remaining in the country – are the elderly. The Russians worked mainly in the industrial and energy sectors. With the collapse of the Soviet Union and the closure of businesses, the Russian-speaking residents started to leave the republic... together with entire enterprises. The main exodus occurred in the early 1990s, but this has not ended.

The political life of Kyrgyzstan has a clannish nature. The Russian-speaking population has found itself outside of these clans, on the outside of structural organizations. Nevertheless, today Kyrgyzstan is still the most tolerant country in Central Asia, if we evaluate the general mood of the dominant ethnic group in relation to the Russian Diaspora. In addition, from the time of the presidency of Askar Akayev, the Russian language has had official status. Thus, the Russian language is dominant in the information space of Kyrgyzstan, with the vast majority of the local media being published in Russian, and no restrictions on the retransmission of Russian TV channels.

A difficult situation has developed in Uzbekistan, although this is not the most difficult in the post-Soviet space. Almost every “post-Soviet” image of Uzbekistan people is associated with the sun, pilaf and a large Uzbek family, which is also raising a few fair-haired children. This cliché emerged during the Second World War, when Uzbekistan “sheltered” not only factories that were moved there from Moscow and Leningrad, but also hundreds of Russians from the western regions of Russia. Now Russians and Russian-speakers in Uzbekistan make up 3 percent of the population. Russian language in Uzbekistan has the status of a language of inter-ethnic communications. In the republic, there are about 1,000 schools with Russian as the language of instruction, and all higher education institutions have Russian-speaking groups. It is also noteworthy that many of the agencies, which work with Russia, conduct their clerical work in Russian.

Tajikistan – is the only country in the Commonwealth of Independent States, where dual citizenship with Russia is allowed. Prior to 1990, the country had nearly 450,000 Slavs, and Chkalovsk was a fully Russian city, where in 1945 they started the first mining and chemical combine – the Vostokredmet, for the extraction of raw uranium. Today no more than 30,000 Russians remain in Tajikistan.

The main reason for leaving was the Civil War. After the peace agreement in 1997, the recovery process never started. The country’s economy had been destroyed and set back several decades. Today, the standard of living in Tajikistan is still very low, and contributes to the exodus of people. In the republic, now there are only elderly people who have nowhere to go and no one to go to.

Despite the fact that in Tajikistan, Russian is recognized as an inter-ethnic language of communications, its scope of application is very narrow. Clerical work has long been conducted in the Tajik language. Dushanbe and Khujand have a couple of Russian schools each, and the Russian-Tajik Slavonic University trains specialists in the Russian language. There is a Russian theatre, but due to meagre funding, it practically does not operate. There is a daily TV news program in the Russian language – Ahbor (News) and weekly informational programs. There are several newspapers published in Russian.

During 22 years of independence of Turkmenistan, at least one in two Russian (Russian-speakers) have been forced to leave the country. The peak of this process occurred in the 2003, when Turkmenistan and Russia signed a gas agreement for a period of 25 years. In response, Russian President Vladimir Putin made concessions to Turkmenbashi (President Saparmurat Niyazov) and signed a protocol to terminate dual citizenships. After the conclusion of the package deal, Niyazov issued a decree by which persons who held dual citizenships, had to give up one of them.

The new president, Gurbanguly Berdimuhamedow, who came to power in 2007, decided to change the passport and once and for all solve the problem of dual citizenship. Only after the intervention of Moscow, dual nationals were allowed to keep a second passport. However, very few such people remain in Turkmenistan today. Maybe that is why in this country there is now only one Russian school, which, by the way, is mostly attended by children of Turkmen officials and wealthy people. These wish their children to continue their educations in Russia or Belarus.

The use of the Russian language in Turkmenistan has been brought down to a minimum. It can only be heard on the streets of Ashgabat. Turkmen people, as a rule, at home and in public service, use only the state language – Turkmen.