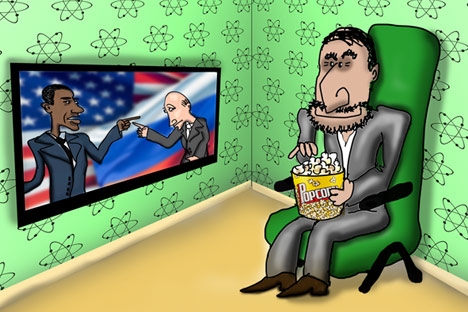 There is a huge amount of mutual mistrust between Russia and the United States on missile defense. Nevertheless, there are still several possibilities for cooperation on the project.

Unlike the United States, Russia continues to improve and develop its limited missile defense system, which is permitted under the 1972 Anti-Ballistic Missile Treaty. The country's missile defense capability consists of the A-135 missile defense system based in the Moscow region. The system includes a powerful radar system and 68 deployed 53T6 short-range missile interceptors that are armed with nuclear warheads. Since the warheads are stored separately from the interceptors, the system is not fully combat-ready. The interceptors are supposed to be armed with these warheads only during a period of serious military threat.

In 1991, Russia started a project to modernize the A-135 system. Financing for the project rapidly increased in 2007. As part of the project, much of the system's hardware will be replaced with new technology. Many of its performance characteristics will be radically improved, and there will be a new version of the 53T6 interceptor armed with conventional warheads. The modernized system, the A-235, will probably be rolled out in 2015. At some point in the future, the A-235 will consist of three layers — short-, medium- and long-range missiles — equipped with conventional warheads. At the same time, Russia intends to keep the nuclear-armed 53T6 interceptors in production.

Meanwhile, the Almaz-Antey military contractor is developing a comprehensive anti-aircraft and missile defense system, the S-500, whose interceptors are expected to be effective against targets moving at up to 7 kilometers per second. First deliveries of the S-500 are expected in 2017 or 2018.

Finally, Russia is upgrading its missile attack early warning system. The focus of the upgrade is to replace the old and cumbersome Soviet radars with the new Voronezh-type radars. At the same time, it is improving its space-based, early warning component that consists of US-KMO satellites.

As a result of these measures, Russia will have a powerful and advanced missile-attack early warning system in a few years — a system that is geographically close to the countries that Washington believes could launch an attack against the United States or its allies. This means that the United States could be interested in some form of cooperation with Russia — at the very least, on missile launch early warning systems.

Moscow has proposed various plans for creating some kind of a common European missile defense system that would involve Russia. The new radar facilities in Gabala, Azerbaijan, which Russia leases, and the new Voronezh-DM radar in Armavir in the Krasnodar region offer an excellent opportunity for U.S.-Russian cooperation on missile defense.

There are three main options for joint missile defense:

1. Information sharing. Russia could share with the United States the data provided by its south-facing missile-attack early warning radars in Gabala and Armavir. There are several possible variants of this option, including a permanent data link from the Russian radars supplying information to a joint U.S.-Russian missile threats center that could be located in the Moscow area.

3. Sectoral missile defense. Moscow has been pushing this option as the official alternative to the U.S. missile defense plans in Europe. The idea is that Russia would be responsible to intercept any missiles originating from pariah states, such as Iran or North Korea, that fly over Russian territory toward its target. Moscow argues that if Russia were to operate such a sector, it would become unnecessary for the United States to deploy its missile defense system in Europe.

S-500 systems will certainly improve that capability, but they are only in the development stage. Even after these systems have been deployed, it will probably take years before they are proven truly effective against enemy missiles.

Thus, the only realistic opportunity for U.S.-Russian missile defense cooperation — at least in the short term — involves limited information sharing.

At the same time, however, any joint project on missile defense— even in a limited form — faces sharp criticism from conservative factions in Russia's political and military establishment. That criticism is based on the notion that there is no real missile threat from pariah states. But many believe that this is basically a spoiler position to paralyze or slow down the deployment of the U.S. missile defense system in Europe — or at the very least use the missile defense issue as a bargaining chip to get something valuable from the United States in return.

Washington is clearly aware of Russia's ambiguity on missile defense. It is therefore far from obvious that the United States will earnestly try to achieve some kind of balance between its missile defense effort and cooperation with Russia.

The level of mutual trust between Russia and the United States on missile defense remains critically low. It is compounded by the apparent lack of consensus on the issue within the military and political establishment of the two countries. In other words, there is absolutely no certainty about the long-term intentions of the opposite side. Unfortunately, this lack of trust makes substantial cooperation on strategic issues like missile defense highly unlikely.