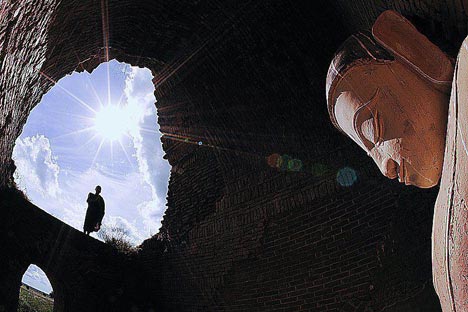 Victor Pelevin is known for infusing Buddhist thoughts into his works. K Govindan Nair, a former professor of the Russian language, gives a detailed account.

“In my situation to die was every bit as natural and reasonable as to leave a theatre that has caught fire in the middle of a performance,” Petka, a key character of Victor Pelevin’s ‘Chapaev and Void’ says in reference to the House on Fire metaphor of the Lotus Sutra, one of the most popular Mahayana Buddhist texts.

Buddhist influence pervades all of the writings of the Russian contemporary fiction writer, according to K G Nair, a Russian language scholar from Thiruvananthapuram in southern India. Dr Nair, who has read and analysed almost all of Pelevin’s novels and short stories, keenly elaborates the author’s esoteric tenor: “Pelevin entered literature when Russia reached a turning point with the introduction of Perestroika. He was repelled by the disorder which followed and sought solace in Buddha’s teachings.”

The author acknowledges the influence of Zen Buddhism in his work, though he refrains from being labelled as a practising Buddhist. Pelevin credits Dharma of Buddha as the best tool he knows for studying and practising his mind, “Mind is the central issue that interests me as a person and as a writer,” he says. “As per the Buddhist school of Madhyamika he believes that the external world is also our mind because both external and internal are purely mental,” says Nair.

From the realm of mind to abstractions of contemporary reality in his native land, Pelevin’s books are steeped in Buddhist philosophy just as much as they are rooted in themes of post-Soviet Russia.

The Doctrine of Void

Pelevin’s 1996 novel ‘Chapaev and Void’ has been published in English as ‘Buddha’s Little Finger’ in the US and as ‘Clay Machine Gun’ in the UK. Nair terms it as the best among all of Pelevin’s Postmodernist exploits - “It is a multifaceted text which interlaces Russia’s turbulent history with ideas of void or Shunyata.” The story seamlessly shuttles in time from the October Revolution to contemporary Russia. “He takes off from Chapaev joke and presents the celebrated Red Army Commander Vasily Chapaev as a Zen Master who gives long monologues on the illusory nature of reality,” Nair goes on to quote the author himself about this book “it is the first novel in world literature to take place in an absolute void.”

The concept of void is also reflected in ‘Ymaca,’ 2005, translated in English as ‘The Helmet of Horror.’ “The helmet monitoring a conversation of voices in a labyrinthine cyberspace is revealed to be a mind, the source of everything” describes Nair.

“Generation P, (1999) is all about the search for meaning in the chaotic Nineties. The protagonist, Tatarsky, who turns from a poet to an ad-world copywriter, represents a whole generation dealing with mindless freedom and a plethora of western influences,” says Nair, “Tatarsky seeks guidance from the spirit of Che Guevara who applies Guatam Buddha’s teaching to interpret the world as being governed by various media.” The book translated in English as ‘Homo Zapiens’ has a chapter titled “The Path to Your Self.”

Dr Nair points out that “Many of Pelevin’s works revolve around transcendence.” He references a couple of early stories by the author – “In ‘The Yellow Arrow,’one passenger aboard a runaway train seeks to escape while all others indulge in superfluous tasks completely oblivious to the train’s fate. While in ‘Hermit and Six Toes,’ two characters are involved in a highly philosophical conversation while planning to go beyond the ‘wall of the world.’”

Victor Pelevin describes his meditation retreats to South Korea and his attraction to Buddhism as having an effect to calm and discipline his mind. While he meditates to “empty (his) mind of all the junk of modern living,” he produces stimulating commentaries on the very absurdities which aggravate him and inspire his surreal narratives of insidious chaos and inward peace.