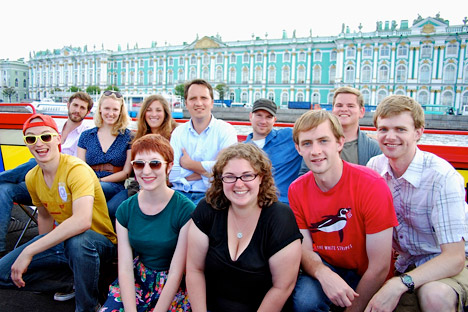 More Russians travel to the United States for educational purposes than the other way around, and educators and Russia watchers are pushing to see this change.

On a beautiful summer evening, ten American students from Washington, DC – eight from American University (AU) and two from Georgetown – animatedly discuss Dostoevsky’s “Crime and Punishment” over grilled meat and Georgian cheese bread in a Moscow restaurant. The talk is led by Russian history professor, Anton Fedyashin of American University (AU), during his “Dostoyevsky’s Russia” trip in July.

As part of AU’s Initiative for Russian Culture (IRC), Fedyashin brought the students to Moscow and St. Petersburg to visit the places where the groundbreaking master Fyodor Dostoyevsky lived and worked and to walk the streets that his characters inhabited.

Over dinner, the group discussed the characters of “Crime and Punishment”; Christianity and the crisis of religion in the 19th century; and the connections between Dostoevsky’s life and his characters.

“Visiting the Dostoevsky apartment-museum in Moscow, where he spent his first 16 years gives us a better understanding of life in Russia during his time, and the general everyday life, which you usually miss taking a city tour,” said AU student Thomas Simpson.

Fedyashin agrees with his student: “The whole culture of museum-apartments is European, but Russians love to create and visit such museums, which you don’t find in the U.S. too often”. “And if they are well done, they give you a priceless insight into the daily aspects of life.”

AU student Sarah Adler said that for her, the Dostoevsky tour was especially interesting, “because I’m studying the same period in American history, so I could see similarities and differences.”

The students who traveled to Moscow are at different points in their studies. Some are undergraduates while several of them are already at work on their MA’s in Russian history, literature or Slavic studies. For several of them, it’s their first time in Russia.  “Everyone wanted to study Dostoevsky on a new and more profound level,” Fedyashin said.

While in St. Petersburg, the students explored the neighborhood in which Dostoevsky set his epic “Crime and Punishment”. The hot weather added to the ambiance, since the novel’s plot also unfolds during a heat wave in the middle of Petersburg’s famous White Nights. “That novel, more than any of his others, is tied to a very specific place,” said Fedyashin. “You can still walk the streets according to Dostoevsky’s descriptions and retrace the steps that Raskolnikov actually took.”

“Modern St. Petersburg and Dostoevsky's St. Petersburg seem to be, in my imagination, linked very closely together,” Georgetown student Tom Miller reminisces. “Walking there late at night, it is not hard to imagine you might accidentally brush shoulders with Raskolnikov himself and hear his fevered mutterings. You feel as if the characters of Crime and Punishment are in the active memory of the city and its inhabitants.”

More Russians travel to the United States for educational purposes than the other way around, and educators and Russia watchers are pushing to see this change. The study trip is a new project for American Universitysponsored by the new Initiative for Russian Culture (IRC).

The IRC began in September 2011 when philanthropist Susan Lehrman (see interview), alongside College of Arts and Sciences dean Peter Starr and Russian Ambassador to the United States Sergey Kislyak, examined the need for young people in both the United States and Russia to build a stronger foundation for the future of the U.S.-Russia relationship. 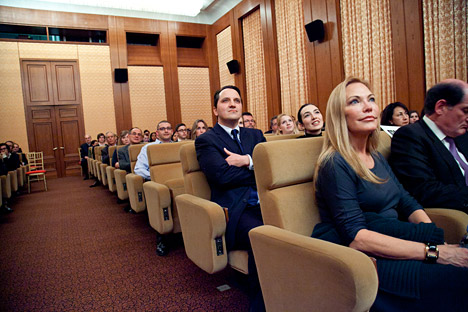 The IRC was launched with a reception at the Library of Congress and film screening of Karen Shakhnazarov’s “We Are Jazzmen”. The IRC has since sponsored regular film screenings of Soviet classics at the Embassy of the Russian Federation in Washington, DC, and hosted a symposium on overcoming Cold War stereotypes on AU’s campus with Russian and American diplomats and academics.

Fedyashin said: “Susan Lehrman’s generosity has allowed us to arrange to bus students from all the Washington Metropolitan Consortium to come visit our events.”

The IRC has  also created innovative programming and classes for students interested in Russian studies at AU, such as “The Cold War and the Spy Novel,” “Russian Politics and Film,” and “Dostoevsky’s Russia,” at a time when many U.S. universities were forced to cut back on Russian studies, Fedyashin said.

Fedyashin hopes to continue study trips next summer after the success of this trip. Next up is a tour of the historic sights significant to Leo Tolstoy, which will build on Fedyashin’s course “Tolstoy vs. Napoleon: Russia and the West” offered this fall to coincide with the bicentennial of the Napoleonic invasion of Russia in 1812. Next year, with the help of Susan Lehrman, the IRC plans to broaden the program even further with concert and theater performances.

This summer, the American students also took in the usual tourism. They visited the Kremlin, went on a full tour of the renovated Bolshoi Theater, and got an in-depth look at the Dostoyevsky Museum in Moscow. In Petersburg, they saw the highlights of the Hermitage, spent a day at the Peter and Paul Fortress and its museums, and finished their trip at the Dostoyevsky Museum in St. Petersburg. Moreover, they participated in the festivities during Dostoyevsky Day on July 7, organized by the Dostoyevsky Museum in Petersburg, and, after attending a Shostakovich and Tchaikovsky concert at the new Mariinsky Concert Hall, they also met with Maestro Valeriy Gergiev. They said they enjoyed the authentic Russian, Georgian, and Azeri food, the shockingly elegant metro system in Moscow, and the Seven Sisters buildings built under Stalin. Some said they even enjoyed holding a Kalashnikov rifle in the Bunker 42 Museum.

“Before I went on the trip, my only knowledge of Russia was based on pictures, stories, and of course, stereotypes,” said Vanessa Robertson, “I had a more sinister idea about everything. Seeing Moscow and St. Petersburg in real life helped break down many false perceptions. For example, I was surprised to see how modern, fast-paced, and capitalist the cities were after hearing so many Cold War stereotypes that underlined the Soviet Union's lasting communist influence”.