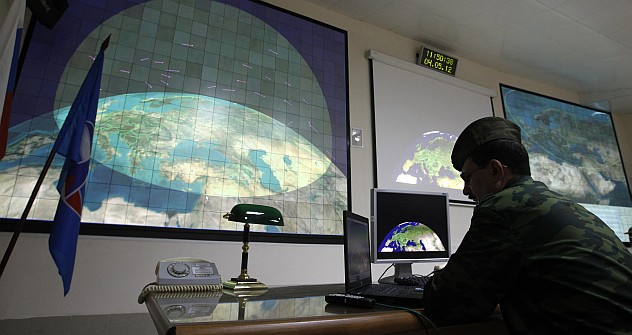 A Russian military officer is on duty in the main control center of a radar station at the missile defense facility in Sofrino, 50 km (31 miles) northeast of Moscow. Source: AP

The European component of America’s anti-ballistic missile system is not only ineffective, but it also creates unnecessary tensions in the region, experts say.

The Russian Foreign Ministry has issued a statement revealing that Russia and the United States may, after all, come to an agreement on anti-ballistic missiles (ABMs). “There is still time to negotiate, but it is not infinite,” Deputy Foreign Minister Sergei Ryabkov told journalists on Sept. 28. “And the situation for us may change when the U.S. launches the third, fourth and following phases of its phased, adaptive approach.”

To prevent this from happening, Moscow proposes the signing of legally binding guarantees that ensure that the missile defense system is not targeted against Russia. Failing that, the U.S. may face a range of “compensatory measures” taken on the part of Russia.

The U.S. allocated more than $10 billion to financing the anti-ballistic missile system this year. A memorandum attached to the Pentagon’s budget states that, by supporting the ABM program, the Obama Administration is seeking to ensure stability in the world. The system is meant to shield the U.S. and its allies against ballistic missiles that are with or without nuclear warheads.

To this end, 46 sea-based SM-3 Block-1B anti-missile arms are planned for purchase. The ABMs are supposed to be upgraded, so as to render them deployable on land. Furthermore, materials are to be bought to build a launching pad for SM-3 anti-missiles in Romania. The Pentagon plans to have the base in Romania operational by 2015, with a similar one in Poland by 2018.

American ABMs in Europe are a key irritant for Moscow, regardless of any changes in the architecture of American assets, for example, in Poland. The administration under President George W. Bush planned to deploy 10 land-based interceptor missiles in Poland, capable to some extent of countering Russian strategic nuclear missile forces. Russia delivered countless verbal broadsides on the issue.

President Barack Obama’s administration has, for its part, “corrected” Bush’s design: for now, Europe will only have abilities to intercept tactical and operational-tactical missiles.

“We want the system to be transparent: In particular, the Russian Federation must be convinced that the system is being built for the acknowledged purposes. So, we will offer opportunities for verification,” the Polish Foreign Minister Radoslaw Sikorski said. The U.S. Secretary of State, Hillary Clinton, said that the system is defensive in nature and poses no threat to Russia. “We want to cooperate with our Russian partners on ABMs because it is in our interests to do so,” she said.

Speaking about Russia’s demand for “legal guarantees” that NATO’s missile defense system will not threaten it, NATO Secretary-General Anders Fogh Rasmussen said that such guarantees have existed for more than ten years, contained in the Founding Act on Mutual Relations, Cooperation and Security between Russia and NATO (1997).

Nevertheless, the real issue here is bilateral relations between Russia and the United States. Russia is demanding legally binding guarantees from the U.S. that the missile defense system will not be targeted against Russian missiles. Such a guarantee would demonstrate America’s attitude toward Russia as a real military and economic partner.

Meanwhile, the actual effectiveness of the American missile defense system in Poland raises big questions, as the Polish president candidly admitted in early August. “Poland needs to create its own air defense system – one that would be an element of the NATO system. Participating in the American project was a mistake,” Bronislaw Komorowski said in an interview with the magazine Wprost.

The Euro-ABM command post is manned by a small unit of servicemen who spend most of their time in front of computers, gathering and analyzing data on possible missile launches. However, in the event of imminent danger, no one here will press the red button. “Our system is designed, above all, to establish whether any flying object has been launched in the direction of NATO territory from a certain region of the world,” said deputy NATO Air Force Commander, Lieutenant General Friedrich Wilhelm Ploeger.

So far, the capacity of the missile defense system is quite limited. “Intercept is possible only if the missile flies into the zone whose protection we can ensure with available assets,” Ploeger said. “If it happens to be in an area whose protection is not overseen, we won’t be able to do anything about it.”

When that time comes, America would do well to have a reliable partner and ally.