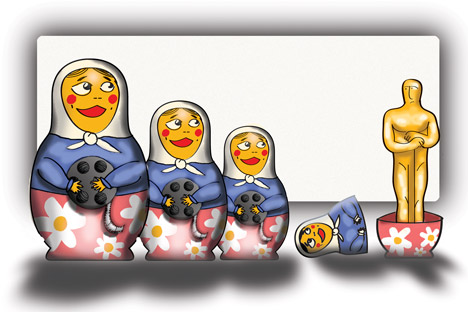 Despite its domestic revival, the prospects for Russian film are still bleak at the foreign box office, but the Internet offers subtitled films a global viewing.

Can new Russian films crack the American market?  Or are they doomed to fail, always fated to be interpreted as “foreign films” and therefore doomed to art house cinemas?  These are questions for which many Russian cinephiles would like answers.

By any measure, the domestic cinema scene in Russia is a success: art house films captivate critics, blockbusters bring in audiences, and television films grab good ratings.  Russian directors have also enjoyed success with genres that stretch from historical epics to slapstick comedies, from animated features to sci-fi dramas.

In the last two years Aleksandr Sokurov’s “Faust” captured the Golden Lion at the Venice Film Festival and Aleksei Uchitel’s “The Edge”was a finalist for the Golden Globe.

If these developments illustrate the recent cinematic renaissance in Russia, they have hardly dented foreign film markets.

True, certain Russian directors – Sokurov, Kira Muratova, and Andrei Zvyagintsev – have enjoyed esteem among foreign film critics and aficionados.  Yet their films are precisely the sort of fare that is aimed for highbrow critics and foreign film cinephiles.

Depending on how you look at it, the most commercially successful Russian film in American history is either Sergei Bodrov’s 2007 “Mongol,” which is the fifty-second highest grossing foreign film in U.S. box office history at $5.7 million, although the film was Kazakhstan’s submission for Best Foreign Language Film, or Sokurov’s 2002 “Russian Ark,” number one hundred fourteen on the list at just over $3 million.  Either way, these are not impressive numbers.

They are also the sorts of figures that produce a lot of hand-wringing in Russia, particularly around Oscar time.  For some, the only path to “success” for a Russian film is through international prizes or an Oscar nomination.

The ongoing debate among the Russian committee is whether or not to nominate a film that seems “American” and will therefore appeal to voters, or whether to nominate an art house film because it conforms more closely to what Academy voters believe “foreign films” should be.

The last decade of submissions has veered back and forth.  Timur Bekmambetov’s “Night Watch” (2004) and Fedor Bondarchuk’s “Ninth Company” (2005), both domestic blockbusters that broke Russian box office records and both filmed in American-style genres, got nods.  So too did Anna Melikian’s 2008 “Mermaid” and Andrei Kravchuk’s 2005 “The Italian,” but only Nikita Mikhalkov’s “12” cracked the top 5 in 2007.

Box office numbers and Oscar selections may represent the paths most people in the film business attempt to take for success, but there are other possible roads.

Bekmambetov’s “Night Watch,” for example, did not dint the U.S. box office in ways its producers had hoped, earning just over $1.5 million. Yet DVD sales took in over $7.5 million in the U.S., more than its budget, and its video-game spin off has also proven to be an international success.

Bekmambetov has gone on to work in Hollywood, directing 2008’s “Wanted” and 2012’s “Abraham Lincoln, Vampire Hunter.”  One potential path to success, therefore, might be found in crossover appeal.

American consumers are more likely to pay for a DVD or Blu-ray of a foreign film that has high-quality subtitles and good extras.  They are certainly more likely to purchase “foreign” games.

A second avenue might be found through a decision Shakhnazarov made not as a director, but as the head of Mosfilm, Russia’s largest studio. He oversaw the creation of Mosfilm’s YouTube collection, which made parts of the studio’s collection in HD format online for free.

The collection does not just contain Soviet classics by Sergei Eisenstein and Andrei Tarkovsky, it also features popular titles by El’dar Ryazanov, Leonid Gaidai, and others.  So far there have been over 15 million video views on the site.

Although putting Russian films online for free may seem counterintuitive to those who want to view success only through box office receipts, Shakhnazarov’s YouTube conforms to the usual YouTube partnership agreement.

Before you watch a film, you watch an advertisement.  YouTube then shares revenues with Mosfilm.  The online catalogue ultimately provides international viewers with a chance to see high-quality films with high-quality subtitles.  Shakhnazarov’s recent films, “The Rider Called Death” (2004) and “Ward #6,” – which was Russia’s Oscar Submission in 2009 – are both available on the site with subtitles.

And there’s the real key:  Russian production companies, studios, and directors would do well to copy the Mosfilm model by seeking out good subtitle translations for their films, making HD versions available online, and using new media outlets such as YouTube and Facebook to promote the stunning array of new Russian films.

Stephen Norris is a film historian and an expert in movie industry.