‘Uncle Vova, we are with you!’ Russian songs about Vladimir Putin 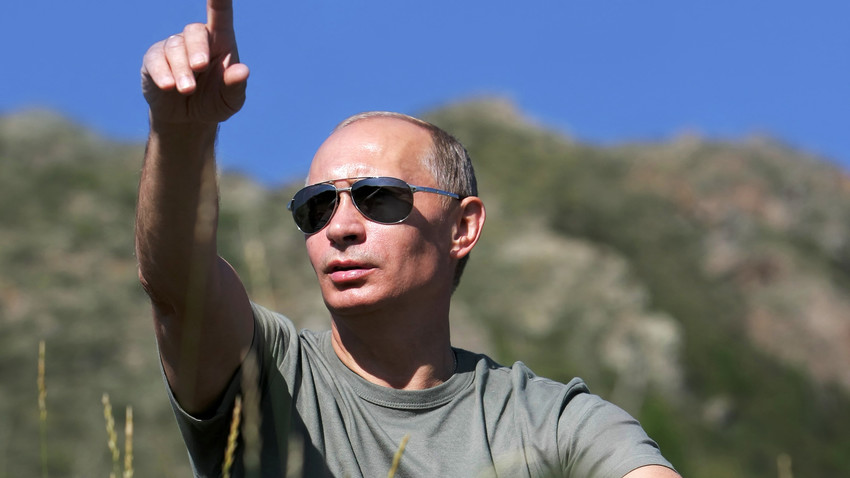 Sputnik
The president certainly has his admirers, among them a number of pop stars. Some have praised him for his strength, others because they think Putin would make the perfect boyfriend. Russia Beyond brings you 7 of the most flamboyant hits about Russia’s leader.

The first songs about Putin appeared pretty soon after he took office: "The One Like Putin" was one of them. It was performed in 2002 by three girls from the little-known band "Poyuschie Vmeste" (The Ones Singing Together). The track turned out to be their most popular.

The trio portrays Putin as the perfect boyfriend:

“Now I want one like Putin who is full of strength,

The one like Putin who would not drink alcohol,

The one like Putin who will not offend me,

The one like Putin who would not run away.”

2. In the Open Fields

The group "Bely Orel" (White Eagle) released their own song about the president at about the same time: "In the Open Fields". Here he’s portrayed not as a sex symbol but as a tough, reliable leader. Both this tune and "The One Like Putin" arrived shortly after Boris Yeltsin’s reign, so perhaps it’s no wonder the groups look upon Putin as both seductive and powerful: Two things his predecessor lacked towards the end of his second term.

The song touches on some heavy topics, including Princess Diana’s death, 9/11, and the Taliban movement - but the underlying message is an attempt to calm listeners down - Russia will protect its people!

“There’s a Grad missile system in the open fields, Putin and Stalingrad are behind us!”

Vladimir Vladimirovich Putin (VVP): This hit was a reaction to the political unrest that swept across Russia in 2011 to 2012 when there were parliamentary and presidential elections. Putin returned to the helm and Tajik singer Tolibjon Kurbankhanov’s accented lyrics paint VVP in a very positive light.

VVP has lifted up Russia and develops it further,

VVP has saved the people,

The recent Ukrainian crisis and deteriorating relationship with the West sparked a new wave of patriotic songs hailing Putin as a . video for "My Putin" shows the singer dressed in the colors of the Russian flag as she belts out the words to the song in a bright open space - but the action then cuts to a dark basement in which she is sporting the colors of Ukraine’s flag...not the most subtle of messages.

I wanna be with you,

I cry to you: My sweet Putin, take me with you, I wanna be with you.”

Famous musicians also got behind Putin around the same time. The most popular Russian R&B artist Timati featured in the track "My Best Friend".

“All our country supports him.

You knew that he is a cool superhero.

Today I am a player, and my friend is with me.

He is the boss, so you know that everything will go according to the plan.

You know who your flagship is.”

6. When We Are Together

Putin seems to be on good terms with another Russian singer, Masha Rasputina. At least in her 2015 track "When We Are Together" she referred to him as “Our friend, the President.” She once performed the song in the Kremlin with a children’s choir

“In this historic moment of anxieties, hopes, and tests,

Our friend, the President, accept sincere recognition from the country,

You live year by year under the signs of equality and fraternity,

People trust you to safeguard the foundations of the state.”

The most recent track dedicated to Putin is called "Uncle Vova, We Are With You!" It’s  caused quite a stir. Anna Kuvychko, a Russian MP, sang it while surrounded by children in military uniform - it’s fair to say she lacks a touch of screen presence...

“The world is tired of wars,

The planet’s residents are sick with the hegemon,

There is no [single] opinion in the EU,

The Middle East is suffering from miseries.”

“If the chief commander will urge to engage in the last battle,

Uncle Vova, we are with you!”

Kuvychko was challenged during one TV show and asked whether it was appropriate for children to declare readiness to engage in “the last battle,” and if her own children felt the same way. However, the song has amassed almost one million views on Youtube.