Which Russian adverts are considered the best in the world? 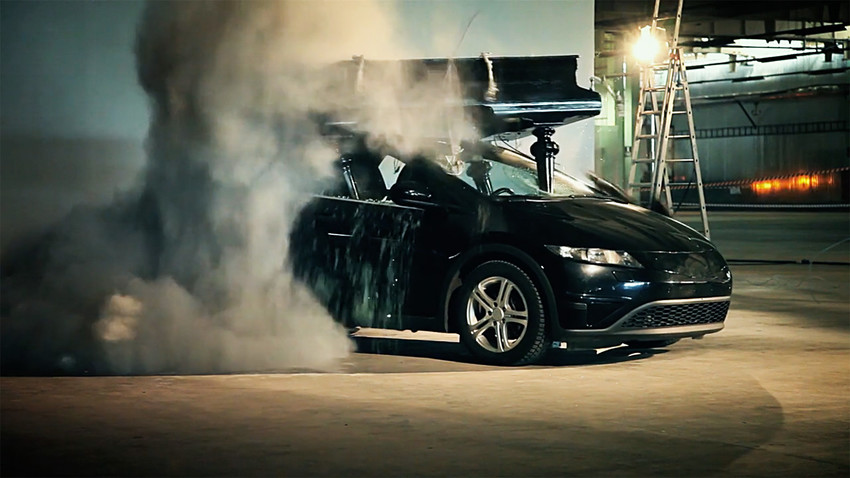 Car vs. Piano for InTouch Company

Proximity Russia / BBDO Group
Have you ever played curling using real cars? Ever been prevented from parking by a hologram? Or driven on a politician’s face? That’s what it takes to create the best ad in the world.

Russian mobile provider Tele2 took two top prizes in June at the Cannes Lions for video ads promoting the world's first Wi-Fi router that uses rain to generate electricity for wireless signals. Its victory - at the world's most prestigious advertising competition - reflects the growing popularity of Russian ads. Here are some of the competition's winners of the last 10 years.

Popular Russian sportswomen, trainers, ballet dancers and actresses starred in this ad made by Nike Russia that combated gender stereotyping. The video became one of the brightest feminist statements made by a major brand in Russia, was a social media hit and won a Golden Lion in the film category.

This video, made by a Yekaterinburg creative agency for media website Ura.ru, took a record 7 Cannes Lions. The video addressed a novel way of drawing attention to pot-holed roads - using the gaping craters in the asphalt as the mouths of politicians drawn by local activists. Campaign pledges to improve roads were written alongside the images.

The concept of the project was simple: Russian orphans asked celebrities to read a book for them, just like their parents would have done. The adverts that ran before the celebrity videos were designed to support the orphans. The project got a Bronze Lion in the entertainment category.

This ad showed coffee being sold over the DarkNet, as if it were illegal, and customers paid for it in Bitcoin. The idea was to mock the notion of coffee as a drug. It won a Silver Cannes Lion.

Young & Rubicam's Moscow agency together with the Dislife non-profit organization projected images of wheelchair users onto parking lots for people with disabilities. Their aim was to remind drivers to respect disabled parking spaces, which is often not the case. The video took a Silver Lion in the promo and activation category.

This music video made by Russian airline S7 together with U.S. Indie rock group ОK Go! was shot in zero gravity and became an Internet hit, with more than 50 million views on Facebook alone. It got a Silver Lion for excellence in the music video category. Read more about it here.

The creators of this video had a piano fall on a car because… random Internet users voted for it. The idea was to prove how unpredictable car accidents are. The video promoted car insurance provided by InTouch Company. A grand piano weighing 395 kilos (870lbs) was suspended from nine ropes above a car in a Moscow garage for a week while people placed bets on unpredictable real-life events that would result in one rope being cut (the temperature in the city, the victory of a favorite football team, etc.). The piano fell on day six. The project took a Bronze Lion in the cyber category.

The video promoting a new album “On The Sun” by Russian rock group Auktyon shows a mobile app that starts playing songs only when the phone's camera is facing the sun. Users could see the album cover also only under direct sunlight. The video got a Bronze Lion in the entertainment for music category.

In Yekaterinburg people used cars for curling rocks. Four teams pushed old cars around on ice instead of the granite stones normally used in the game. The event was staged to promote car insurance provider Smartpolice. The video of the game quickly went viral both in Russia and overseas, winning it a bronze Cannes Lion.

Tele2 and Geometry Global Moscow created 4G routers that generated electricity from rainwater flows. The gadgets were installed in St. Petersburg allowing people to test high-speed Internet in places where other operators were unable to provide fast connections. The video took a Silver Lion in the outdoor category and a Bronze in the mobile category.