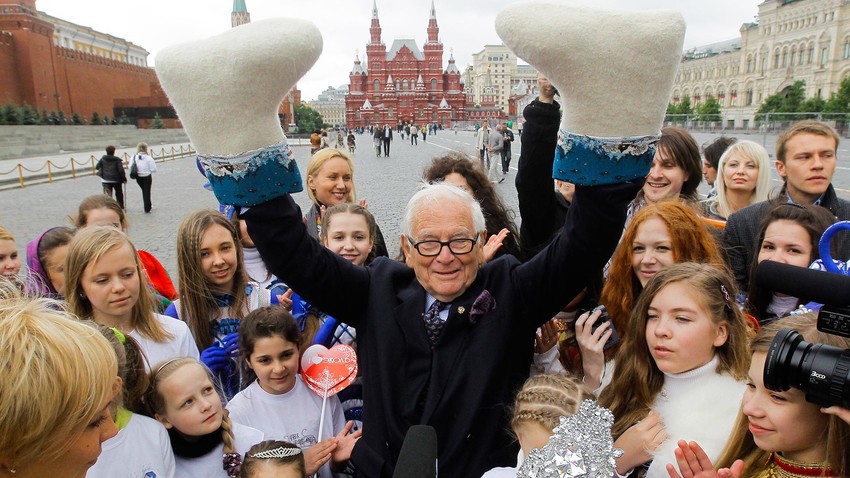 Ilya Pitalev/Sputnik
Pierre Cardin’s love of Russia was the stuff of legend. He used Russian motifs in his collections, dressed Russian ballerinas and first ladies, and in the post-perestroika years he bought up commercial real estate in Moscow, opened restaurants there, and toured France with provincial drama groups.

The designer’s ties with Russia were surprisingly diverse. Not only did he make clothes for Raisa Gorbacheva, the wife of the last leader of the USSR, and dress the immortal ballerina Maya Plisetskaya; as a UNESCO goodwill ambassador, he also raised funds for the Chernobyl clean-up operation. And in 2013, from the hands of Vladimir Putin himself, he received the Order of Friendship, awarded to foreigners for services to Russia.

Cardin visited Russia countless times. His first trip was in Soviet times, in 1963, as part of a delegation of cultural workers. The fashion designer never bowed to political censorship: if he considered a project commercially viable, he was ready to implement it even on the other side of the Iron Curtain. Cardin collaborated with dozens of textile factories in the USSR, producing ready-to-wear collections for Eastern Europe. 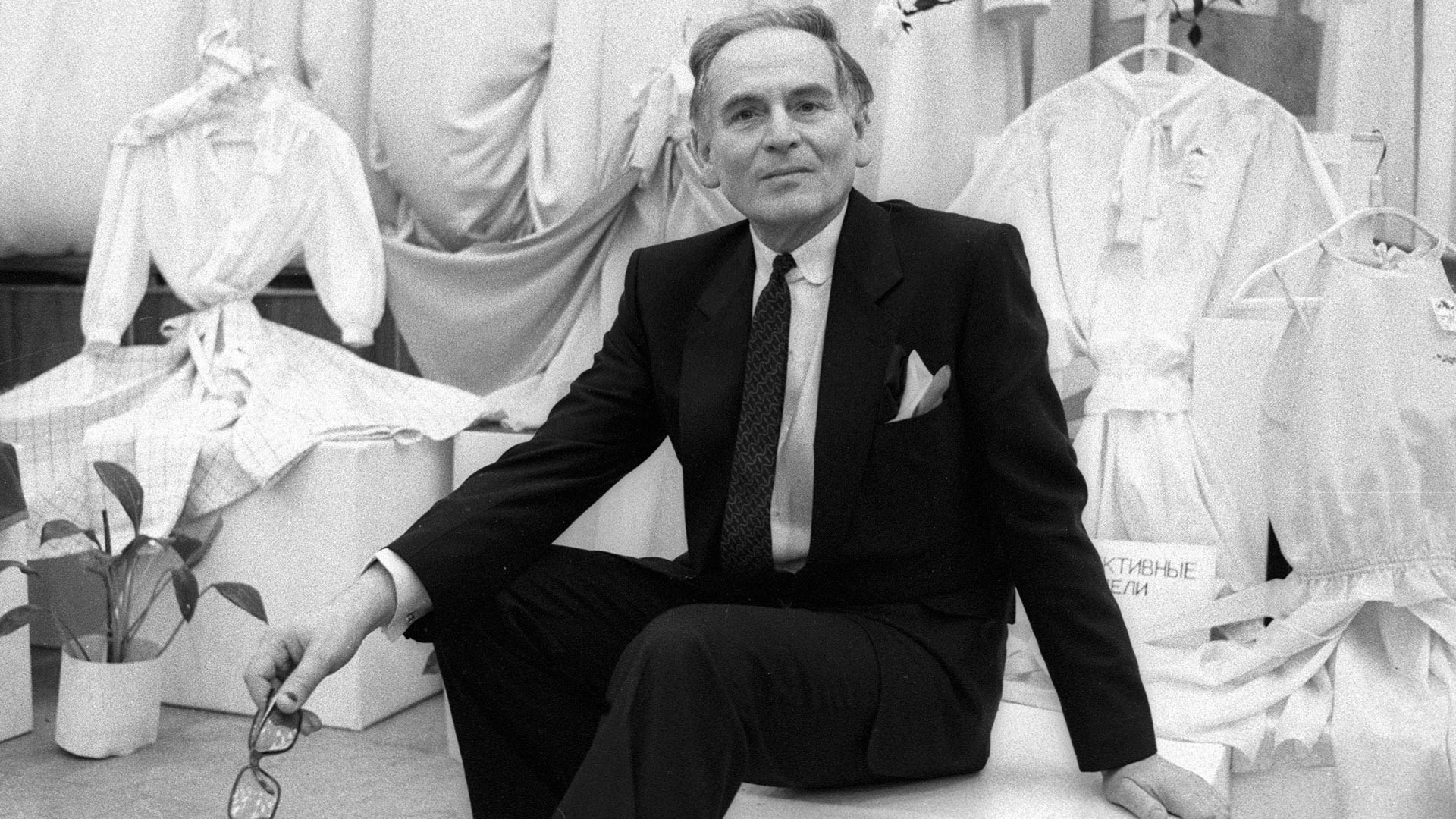 A key theme of the designer’s output in the 1960s-70s was space exploration. He openly admitted that his revolutionary female outfits resembling spacesuits were conceived in his mind from photographs of Valentina Tereshkova, the first woman in space. His Space collection, inspired by Yuri Gagarin’s flight, became emblematic of his work and the development of 1960s fashion as a whole. 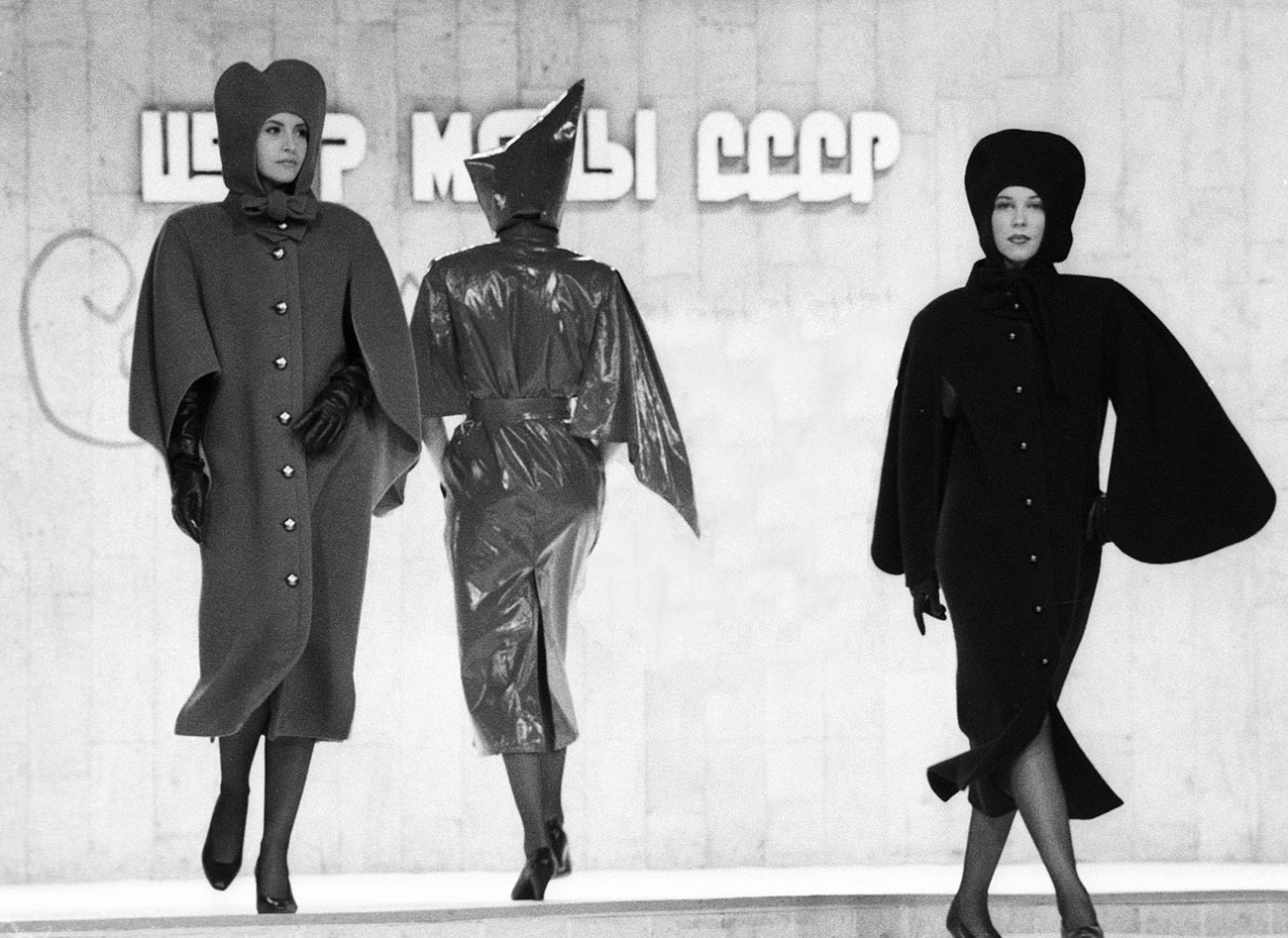 Models on the catwalk demonstrating coats at the French designer Pierre Cardin fashion show in Moscow, 1989

Cardin repeatedly returned to the motif of stellar odysseys. For instance, in 2011 the Kremlin Palace hosted another space-themed fashion show by Cardin, timed to coincide with the 50th anniversary of Gagarin’s flight and inspired by Russia’s contribution to the development of interplanetary travel. 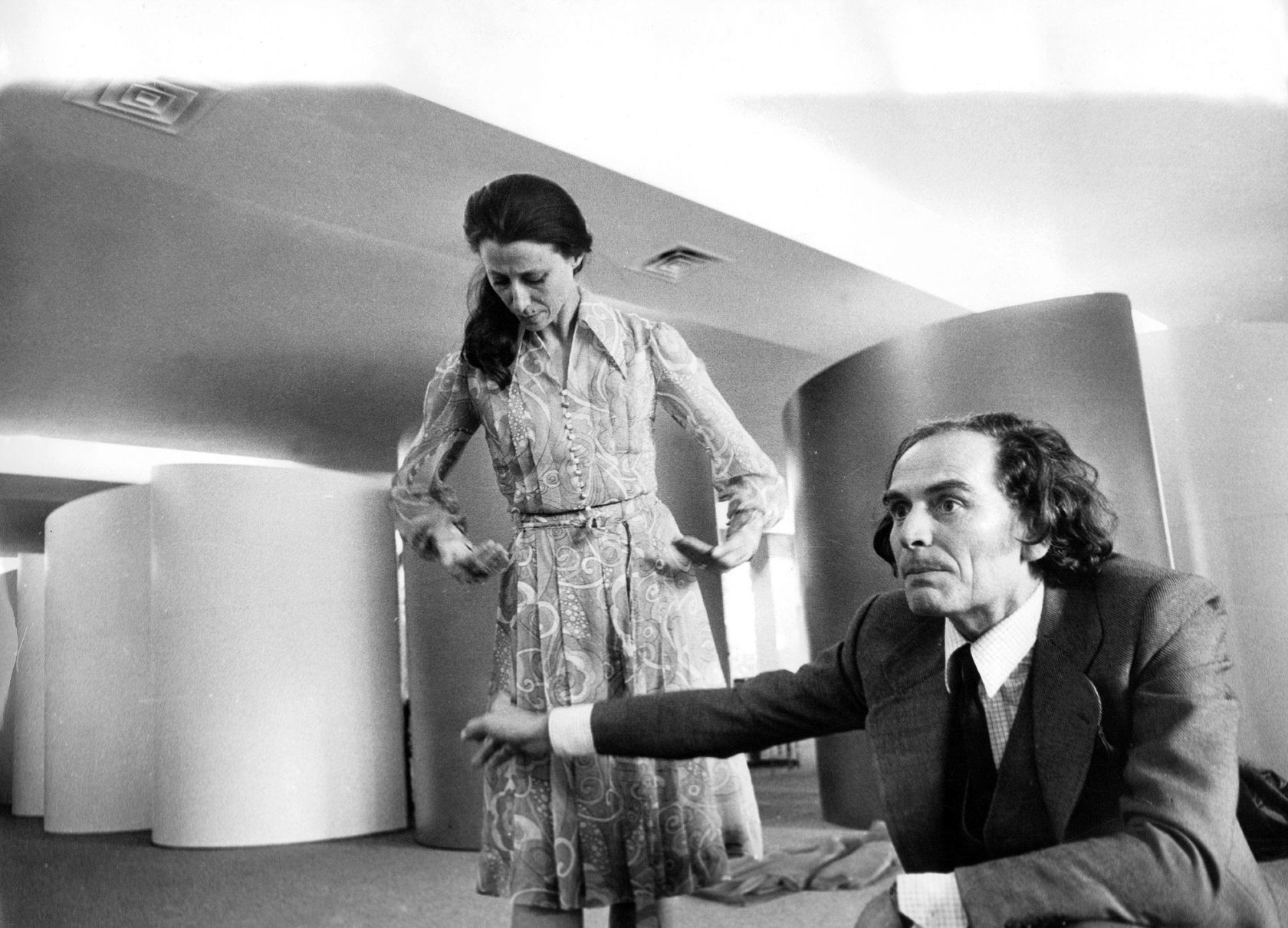 In the 1970s, Cardin was considered the main Western fashion star in the USSR. Political loyalty opened many doors for him. Cardin’s creations, which could be bought in the special Beryozka stores (off-limits to ordinary citizens), were worn by the wives of political bigwigs, and his personal friendship with Maya Plisetskaya made him popular with well-heeled bohemians. 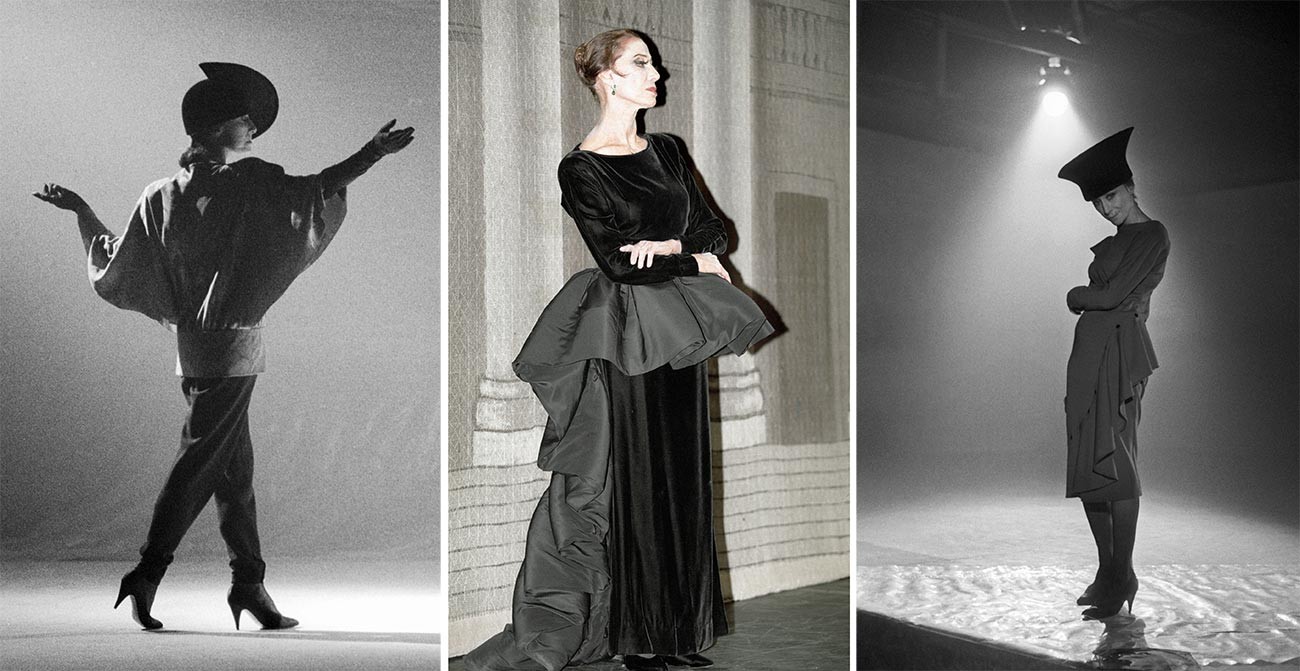 Cardin met Plisetskaya at the Avignon theater festival during her 1971 tour of France, and went on to create costumes for many productions starring the prima donna, the most famous being the Bolshoi Theater’s legendary ballet interpretation of Anna Karenina. The ballerina also willingly modeled Cardin’s ensembles in everyday life, which served as the best possible advertisement in Soviet high society. 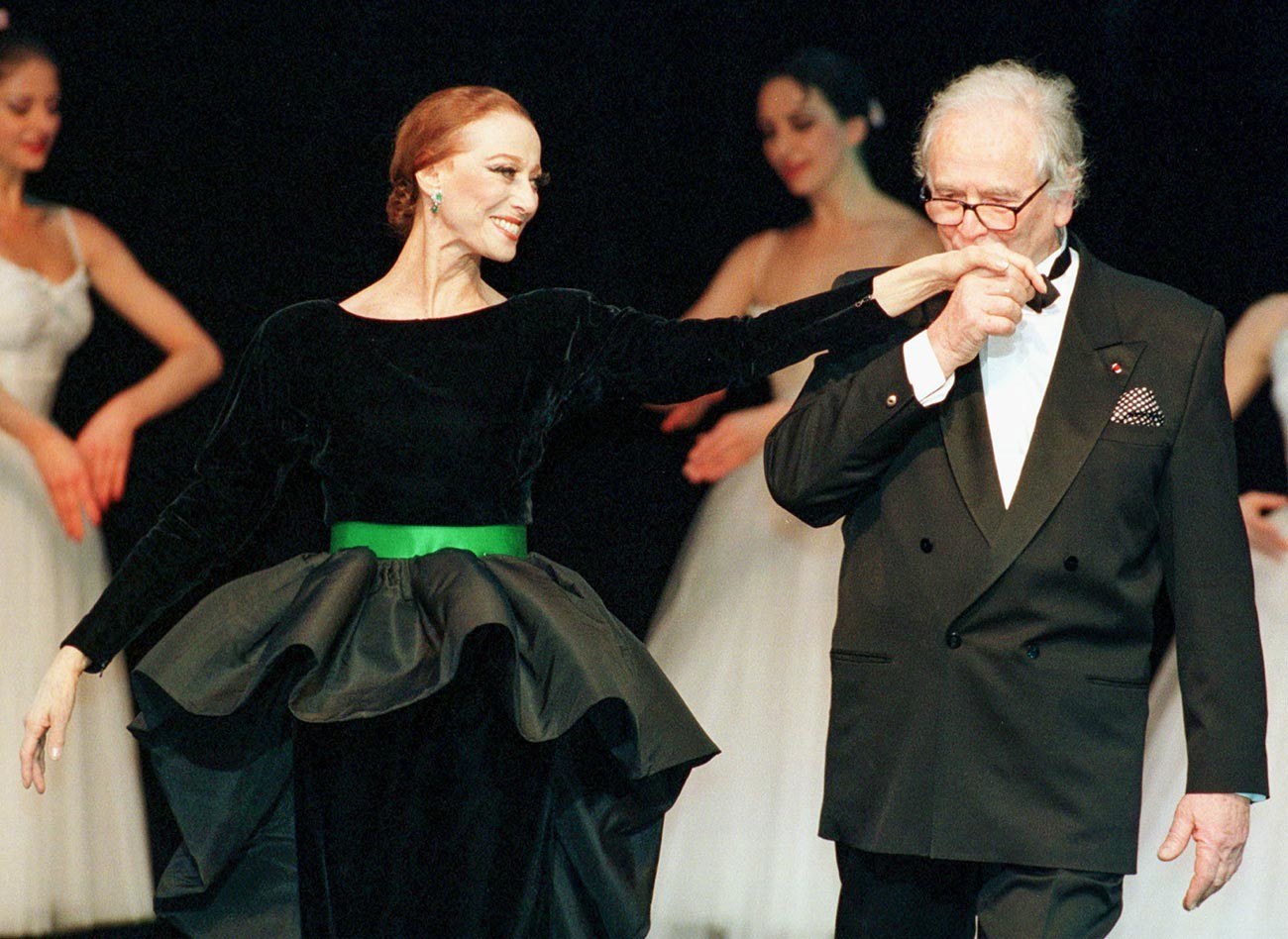 Plisetskaya and Cardin in in St Petersburg, 1998

The changing of the guard

Perestroika did not dampen Cardin’s affection for Russia. On the contrary, by realigning his business model, orders only increased. Cardin was a trailblazer in the ready-to-wear industry, introducing logos and franchises that now seem so familiar. Hence, the opening up of a new market in a continent-sized country that knew no conceptual or financial constraints only spurred him further. Interestingly, the trademark cut and sculptural silhouettes of Cardin’s outfits conquered Russia’s new elite just as readily. First ladies again appeared in Cardin suits. Raisa Gorbacheva often referred to him as her favorite designer, and wore his items on all official visits. 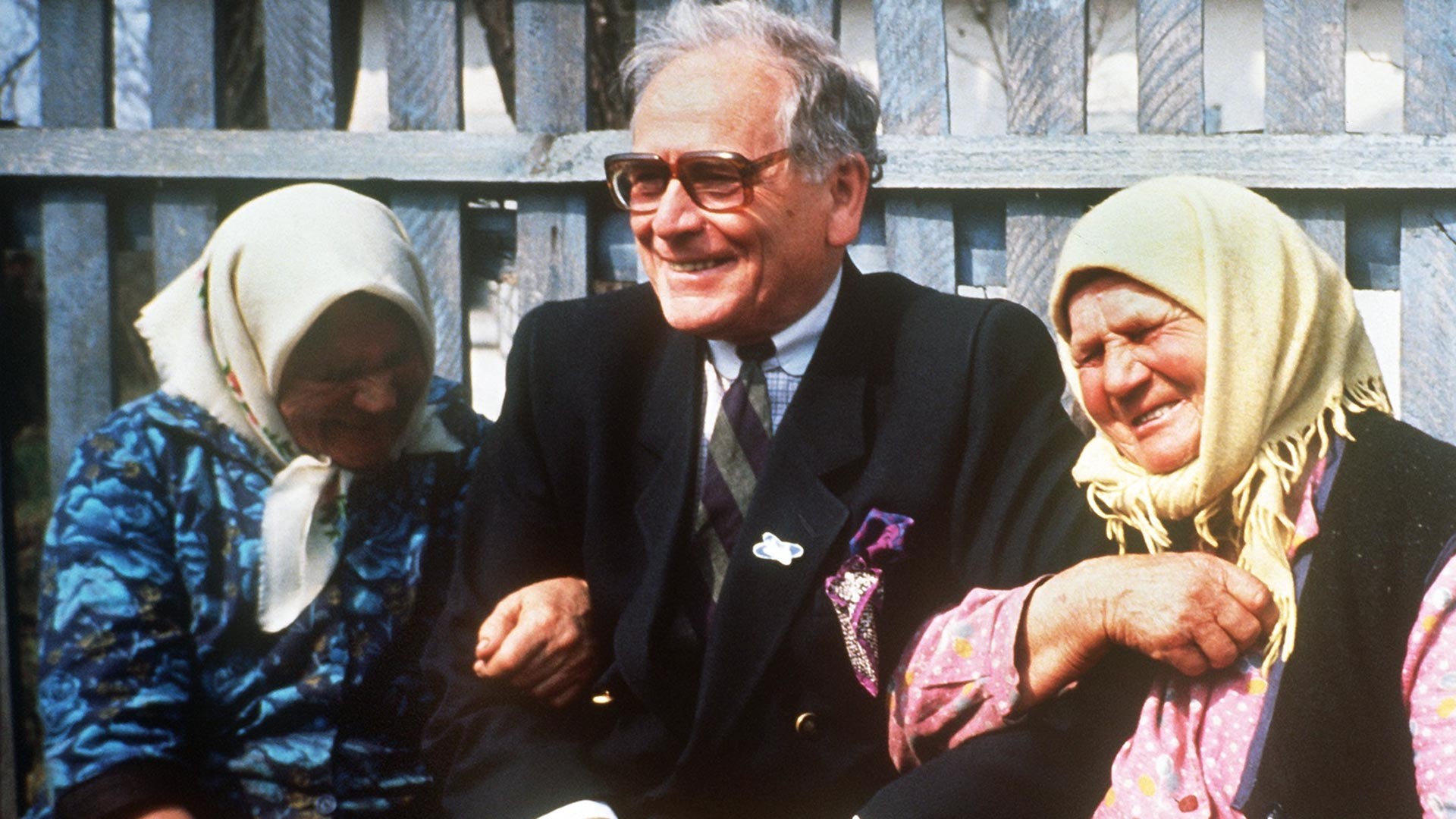 Back in the Soviet years, Cardin actively promoted Russian culture in the West. He was instrumental in getting the Russian rock opera Juno and Avos by Mark Zakharov staged in France, and then during perestroika, the multi-faceted fashion designer, this time in the role of producer, took it to the US. He was rumored to be an accomplished singer himself, who loved to perform arias from Zakharov’s opera in front of friends in his restaurant Maxim’s (Cardin owned the entire chain, including the flagship establishment in Paris and the one in Moscow that opened in 1998). 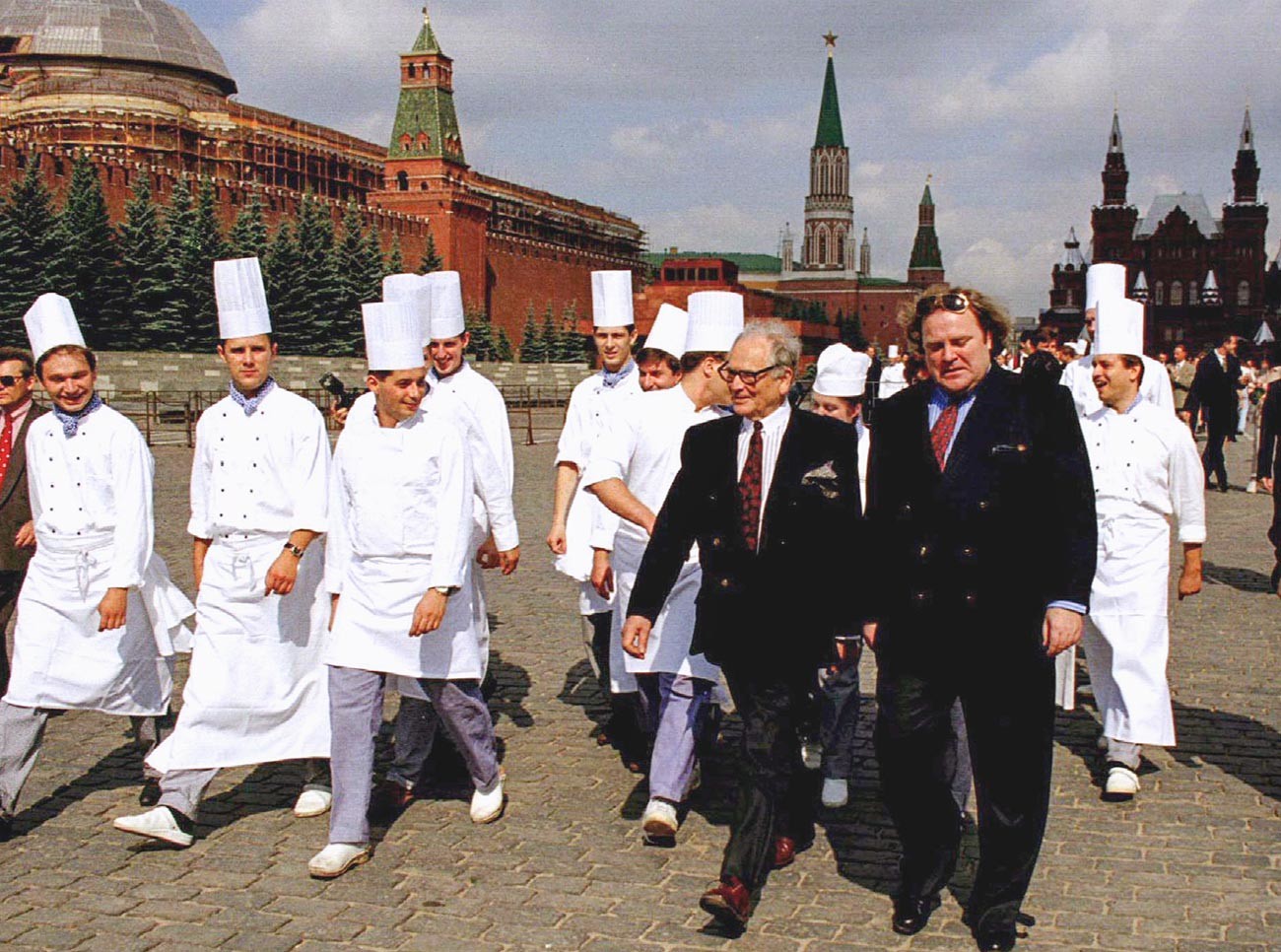 Pierre Cardin and staff of the newly opened Maxim's restaurant

Cardin was always a shrewd businessman whatever he turned his hand to. For instance, in Paris, he set up his own theater, Espace Pierre Cardin, which staged many Russian plays. Then, as a distributor, Cardin brought European productions to the new Russia, helping to build cultural ties.

“I have always considered myself less a pattern cutter (although I am good at this, of course),” the fashion designer once said, “and more a diplomat. I support art, social projects and important cultural initiatives on both sides of the Curtain.” The designer sponsored a number of awards for aspiring artists and performers from Russia, including the Young Talents festival, organized various shows for Russian designers in France, and funded a wide range of cross-cultural exchange projects between the two countries.

One of the biggest displays of Cardin-mania in Russia was the 1991 fashion show held right on Red Square. It is reckoned that up to 200,000 people attended the show, unprecedented for the country. A sign of the times, the event typified the new era of friendship between the two worlds after 70 years of hostility. 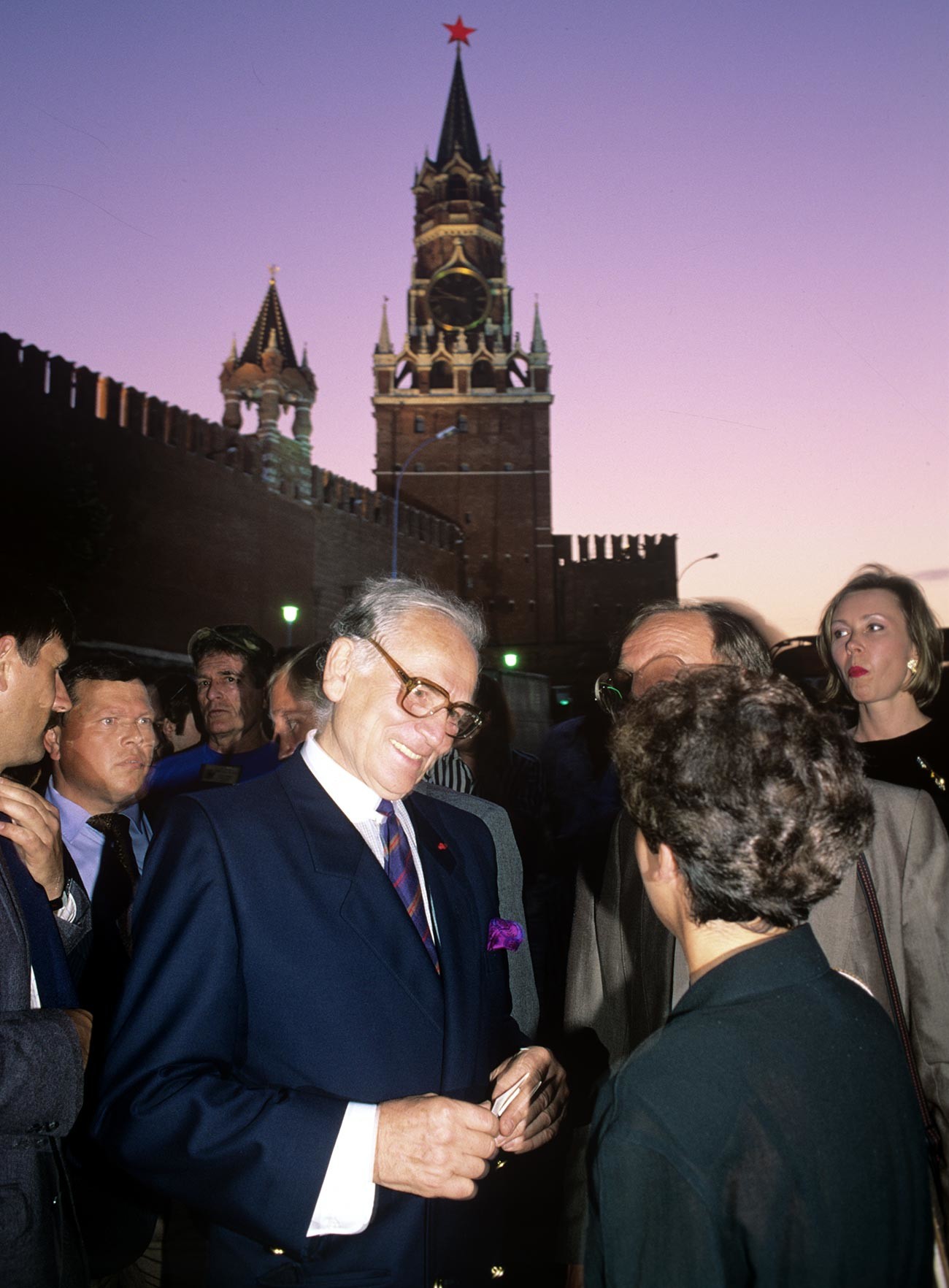 The show, likened to a military parade, was broadcast on national television as a symbol of a country looking to the future. Interestingly, the main sponsor of the show was the firm MMM, one of the first commercial structures of the era in the field of computer technology, a forerunner of the future financial pyramid. 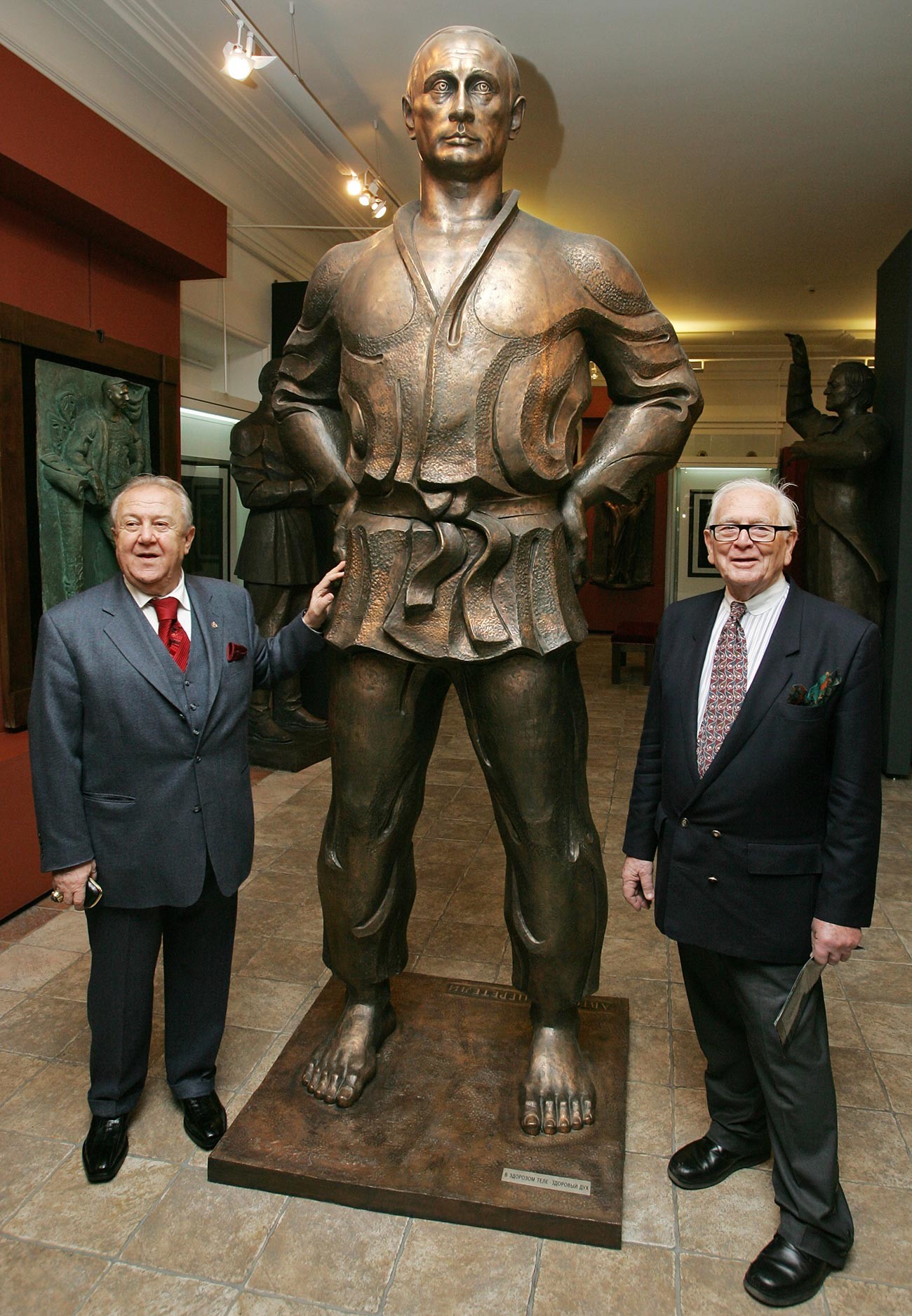 Famed for his ambition and never short of modesty, Cardin took up residence in the family seat of the Marquis de Sade after buying Lacoste Castle and virtually the entire surrounding village in the early 2000s, having earned his first billion. 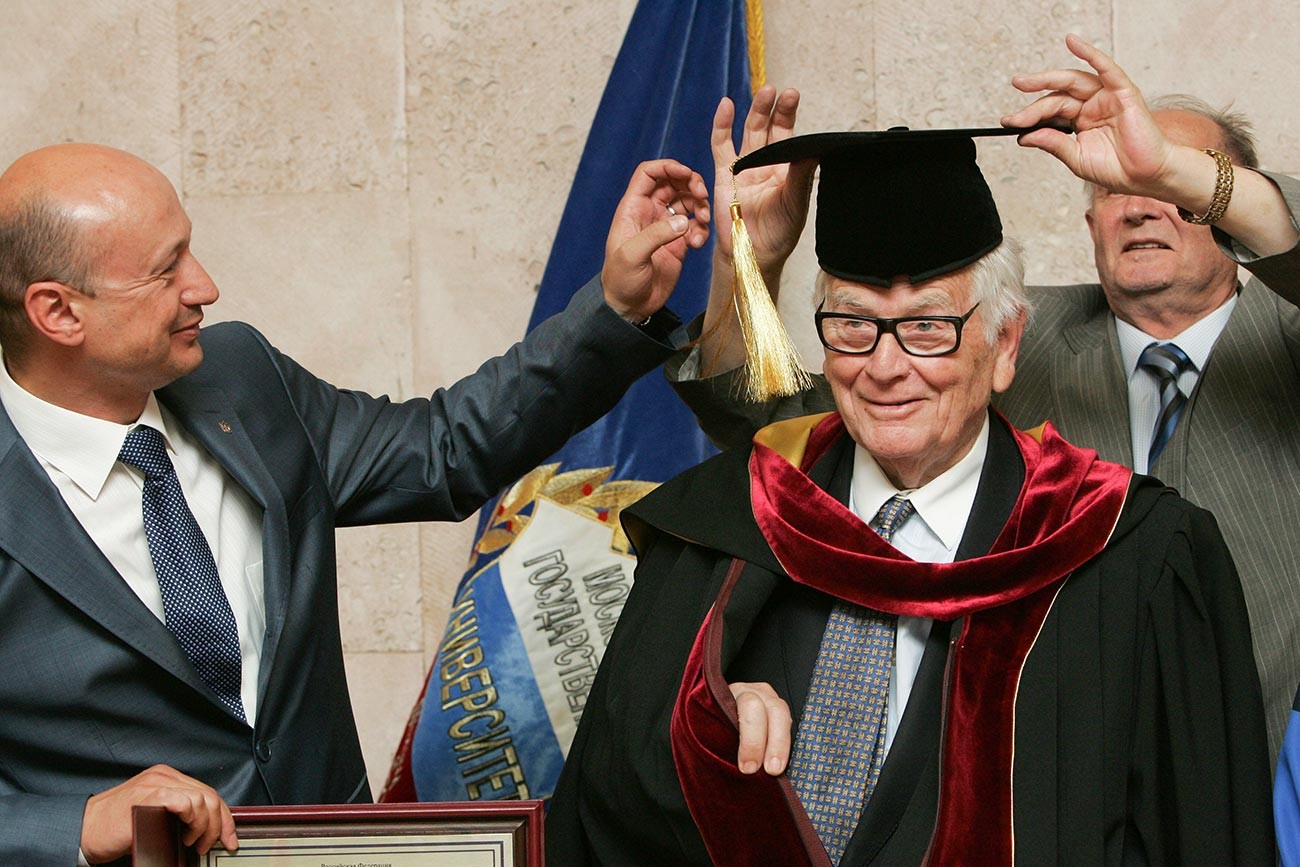 Here, too, unexpectedly this time, the Russian influence can be traced: the fashion designer installed a sculpture park at the castle with works solely by Russian creators. In particular, the monument to de Sade was hand-crafted by Moscow sculptor Alexander Burganov.