‘A PILE OF SH*T!’: New sculpture in Moscow creates a scandal 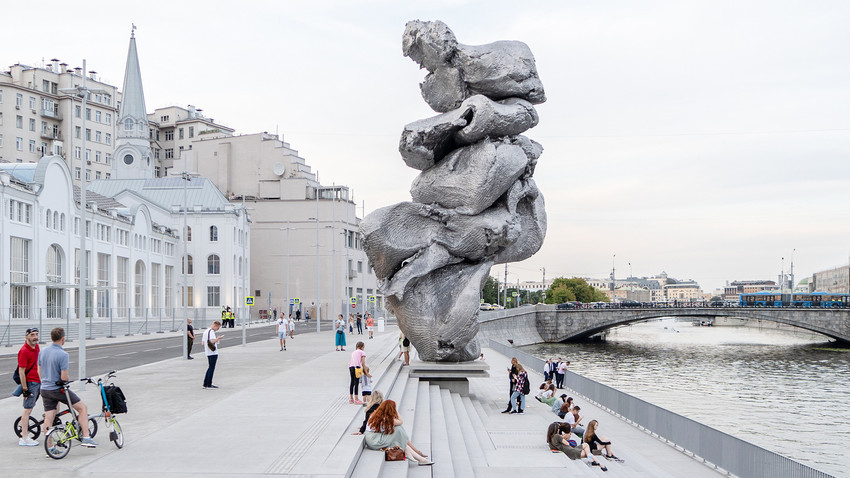 Big Clay No.4’ sculpture by Urs Fischer on Bolotnaya embankment in Moscow

Gleb Leonov
A number of Muscovites and online users were profoundly shocked at a new downtown art installation: ‘Big Clay N.4’ - a 12-meter sculpture by famous Swiss visual artist Urs Fischer, has been likened to “a pile of sh*t”. But, as it turns out, it also has its fair share of supporters.

Moscow has been waiting for years for the opening of ‘GES-2’, a new art center sponsored by the ‘V-A-C’ contemporary art fund, belonging to Russian billionaire Leonid Mikhelson. He bought the building for it back in 2014 - a defunct electrical power station on Bolotnaya embankment right in the center of Moscow Reconstruction was handled by Renzo Piano - the fabled architect behind the Centre Pompidou in Paris and numerous other museums around the world. The project received personal praise from Moscow mayor Sergey Sobyanin, among others.

The opening has been postponed for more than a year now, due to the pandemic, but the organizers, in an apparent attempt to liven things up a bit, decided to remind everyone of the project’s existence by installing a temporary 12-meter sculpture on the renovated side of the embankment. ‘Big Clay No.4’, as it’s named, is the work of Swiss artist Urs Fischer, and amounts to a large-scale reproduction of a slab of clay, after it’s been kneaded by the sculptor’s hands. The installation immediately provoked the ire of Muscovites, both online and off.

According to art experts, the sculpture symbolizes raw material and all that can come of it in the future - both successful and not. According to V-A-C, “replicated in a massive size, it is the raw working material at the very start of resembling the desired form.”

Contemporary art is notorious for being interpreted in a multitude of ways. That said, many online users saw the “clay” as a bunch of experimentation: “It simply looks like quite a messy, 12-meter pile of sh*t,” comedian and TV host Maksim Galkin wrote on his Instagram prior to the installation of the sculpture. This was followed by hundreds of similar comments after it was unveiled. 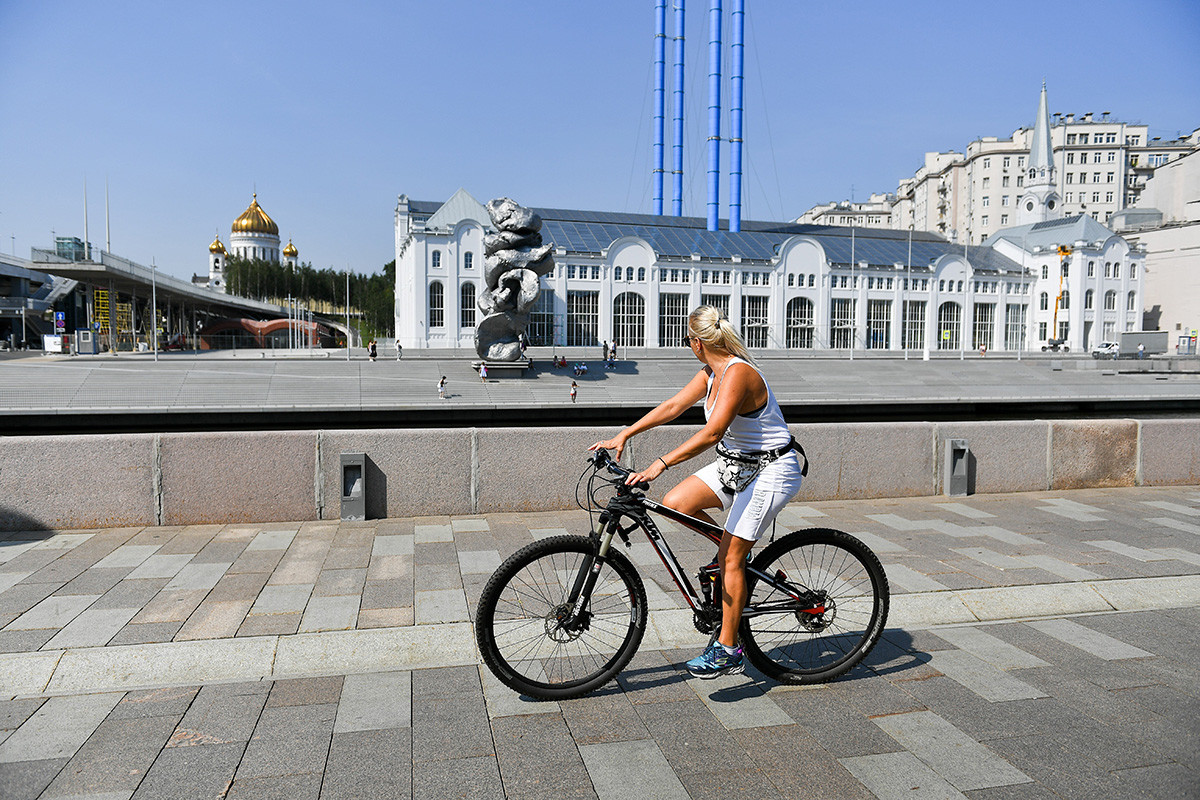 Muscovites started criticizing the statue even before it was installed

For the most part, the hate came from the places people expected; however, shots were also fired by members of the art world. “Moscow’s now got a pile of sh*t!” - came the fiery attack from famous photographer, artist and designer Yekaterina Rozhdestvenskaya. “You see, the author, a certain Fischer, who called his turd ‘Big Clay No.4’, was sort of working the clay in his hands, and he soooooo liiiiiked [sic] the way it came out! Well, you can see the result for yourself,” Rozhdestvenskaya wrote on Facebook - although, she hasn’t actually seen the sculpture in person, being that she was abroad when it was unveiled to the public.

The collective emotions of all who complained were aptly summarized by architecture critic Grigory Revzin: “We’ve been covered in piss! All of us! By whom? And what right did they have? Where was the government looking?”

Revzin, likewise, believes that the sculpture is quite banal, but that the scandal is part of the objective and, from that standpoint, it’s a success. He also reminded people of the scandalous Russian avant garde scene. “A little more than a century ago, art adopted the strategy of becoming a slap in the face of society’s sense of taste. That is, it started to deliberately provoke the everyday person into feeling negative emotions and the intensity of that negativity became itself a criterion of the artwork.” 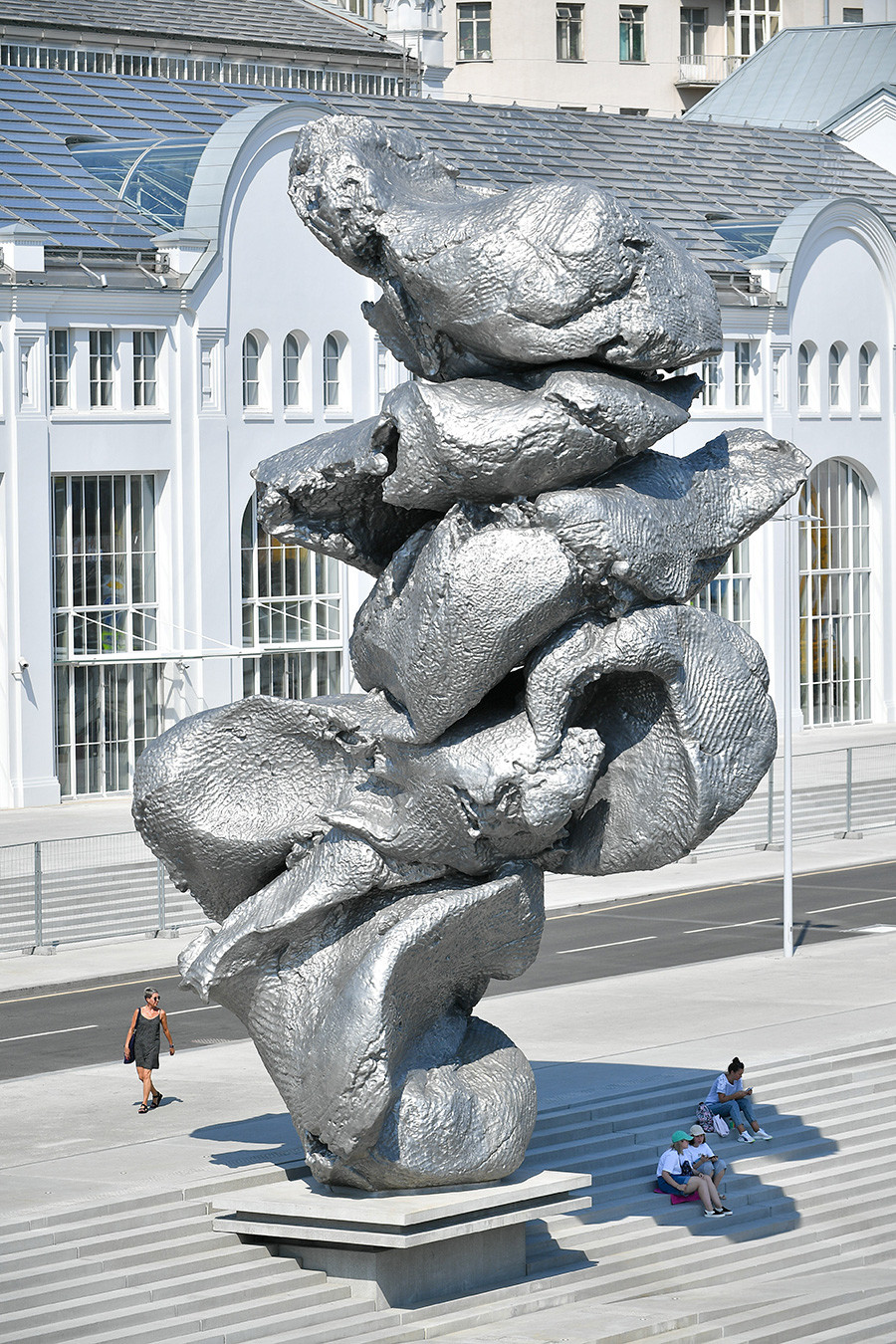 Buzz around contemporary art these days is an inseparable part of the scene, according to experts. “Of course, it’s an intended (and quite successful) provocation by Urs Fischer, it’s already driving the commenters insane, which means the correct strategy was chosen,” art observer Dmitry Pilikin wrote. “The fact that it so enrages the common audience is one of the contributing factors here.”

Ivan Polissky, who organizes ‘Arkhstoyaniye’, a major land-art festival, believes that V-A-C chose the wrong strategy. “You can’t ignore the people you’re dealing with. Even if it acts in a certain way and needs to argue over everything, you also need it to fill museums - instead of promoting anti-artistic ideologies.”

Fischer’s work became a real litmus test for Russian society’s relationship with contemporary art. Prior to making its way to Moscow, the sculpture stood in New York and Florence, right next to the copy of Michaelanjelo’s David and neither of those publics threw a fit.

Culture observer Anna Narinskaya is not surprised that the Muscovites found the work distasteful and believes it bears some resemblance to the Peter the Great statue standing nearby - also one of the most hated sculptures in all of Moscow. “The sculpture quietly takes its place among the other, already hated, objects,” she wrote in an article for Novaya Gazeta. 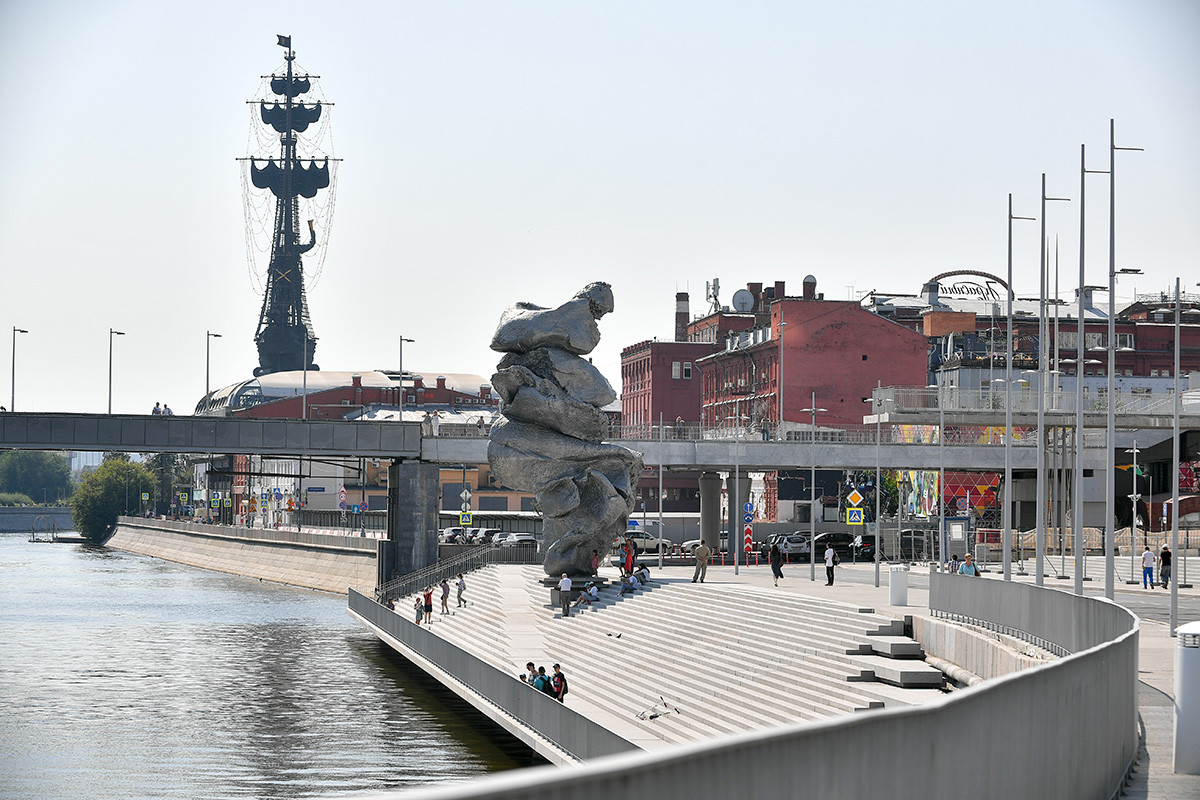 The discussion around the sculpture has also left social media and made its way into the physical realm. The wave of hate directed at the work has now resulted in even the authorities having their say.

“Anything that offends the sensibilities of Muscovites and visitors, cannot be displayed,” the Ministry of Culture’s Public Council head, Mikhail Lermonotov, told the TASS news agency. He also promised to raise the issue at an upcoming council meeting.

Fischer’s clay sculpture has actually not been the only scandal surrounding contemporary art. Russia, with its lengthy history of Soviet socialist realism, is, for the most part, used only to that style’s very direct and extremely unambiguous images and means of expression: anything new, requiring contextualization and deeper analysis, usually elicits public outrage. Rezvin himself pointed out how this seems to be the case with every major new sculpture unveiling - be it the Rzhev Soldier memorial, or the monument to AK-47 creator Mikhail Kalashnikov, or others. 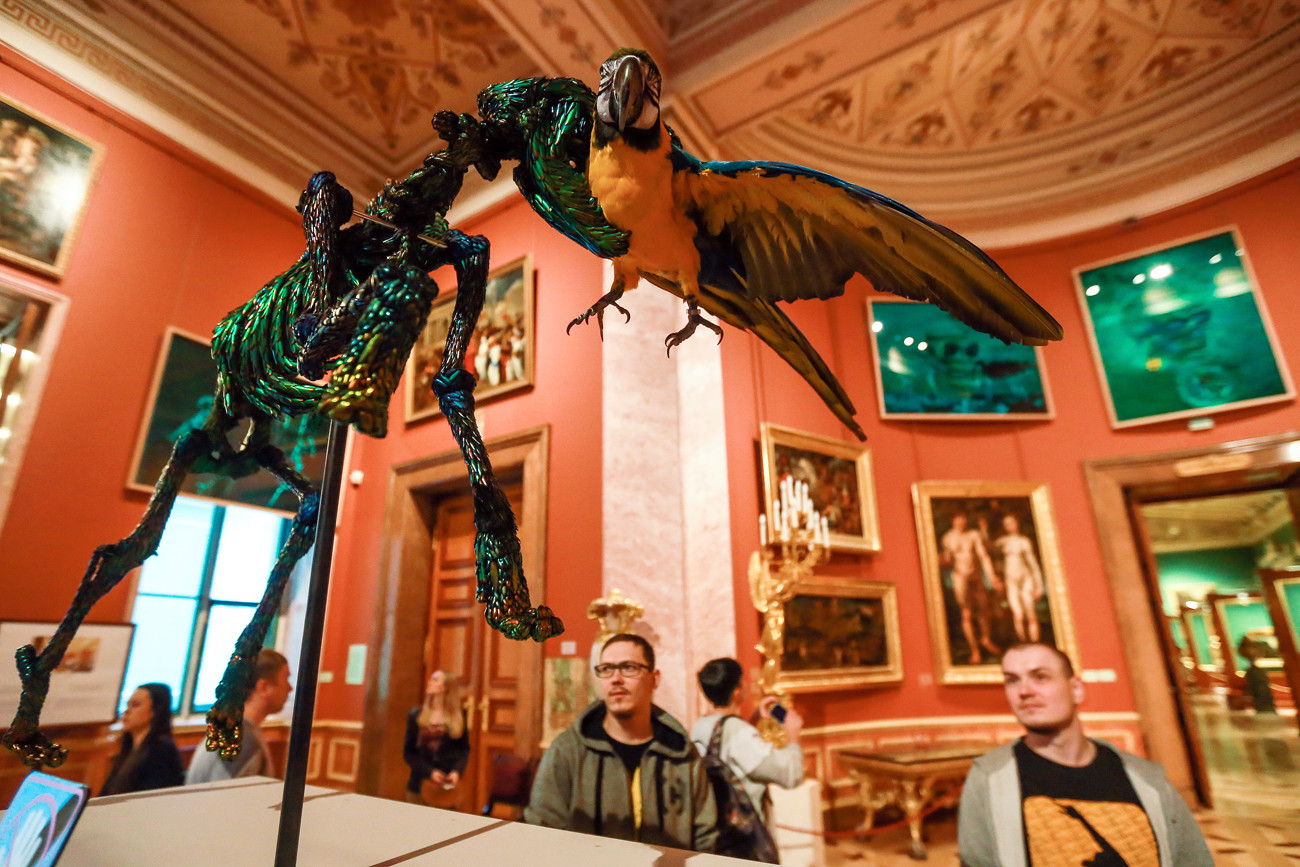 'Jan Fabre. Knight of Despair / Warrior of Beauty' exhibition in the Hermitage, 2016

One of the biggest scandals in recent years erupted over the Belgian artist Jan Fabre’s exhibition at the Hermitage museum. Fabre’s works had previously been displayed at the Louvre in Paris, the Biennale in Venice and hundreds of other prestigious shows. The St. Petersburgers, however, took offense that a museum famous for its classical displays suddenly gave the public Fabre’s “animal corpses”.