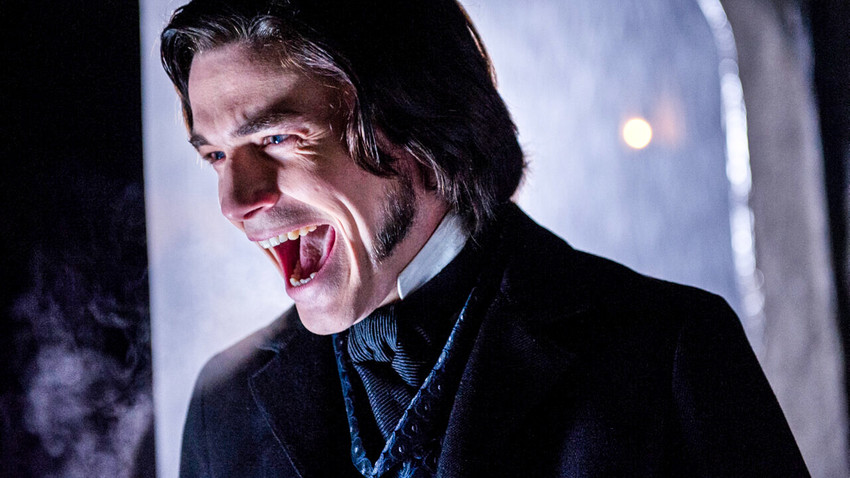 Vladimir Khotinenko/Non-stop production, 2014
Falling in love with kind, witty and good-looking characters is too damn easy. The real challenge is to understand and accept those who are evil, greedy and destructive. At least give them a fighting chance!

Stavrogin is the personification of the darkest side of human personality. There’s probably no character in the novel whom Stavrogin wouldn’t bring suffering to, whom he wouldn’t seduce, insult, offend or destroy. 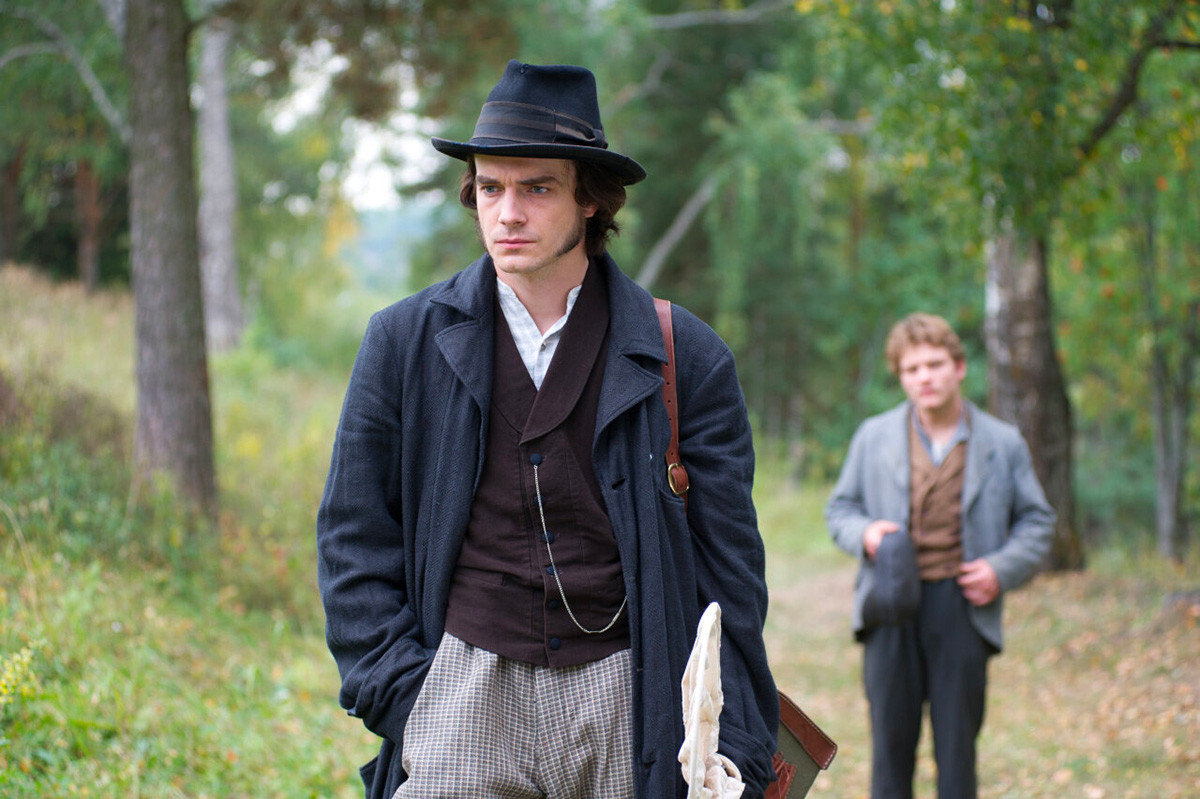 “I was also struck by his face: ...it would seem that he was a handsome man, but, at the same time, he seemed to be disgusting. They said that his face resembled a mask,” the narrator says, describing the protagonist. Russian philosopher Nikolai Berdyaev considered Stavrogin the most mysterious fictional character in world literature.

The image of a “charming demon” was created by Dostoevsky with incomprehensible artistry. Stavrogin has an exceptional mind and a bruised soul. He is an anti-hero, a man with a thousand faces, a psychopath, a manipulator and a serial womanizer.

“...This is a whole social type (in my opinion), our type, Russian, an idle person who doesn’t want to be idle, but who has lost everything once dearly loved and, most importantly, faith; depraved out of melancholy, but conscientious and using convulsive anguished efforts to refresh himself and start believing again…” Dostoevsky wrote about Stavrogin.

Komarovsky is the epitome of evil. Lustful and sinful, Komarovsky, who is a well-off Moscow lawyer, is a magnet for weak women. 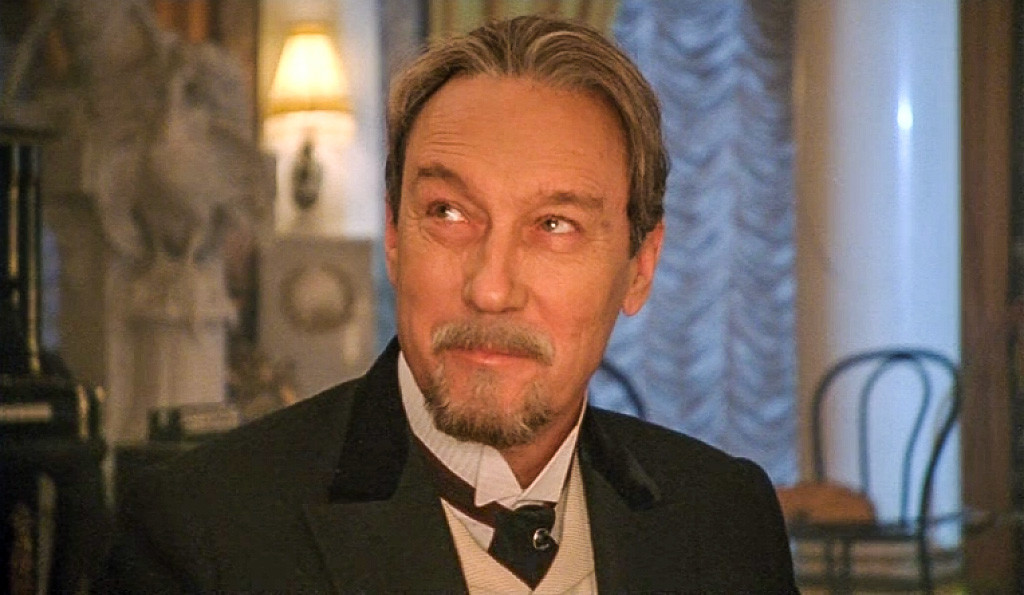 There is no room for taboo subjects for the middle-aged man, who is described as a “…confident person, solid and arrogant…” This description fits Komarovsky like a glove. First, he seduces the widow of a Belgian engineer, then he molests her 16-year-old daughter, Lara. A man of no principles, Komarovsky uses people like casino tokens to achieve his goal. After a person has fulfilled their “role”, they can be instantly discarded. Komarovsky is not only a lawyer, but also a schemer and a politician, who wants personal gain from just about anything.  During World War I, he maintains good relations with both liberal politicians and socialists. A self-centered careerist, Komarovsky would make any agreement with his conscience to achieve the desired result.

Porphyry Golovlyov, aka Iudushka (or ‘little Judas’) is one of the central characters in ‘The Golovlyov Family’ novel by Mikhail Saltykov-Shchedrin. His reputation precedes him: A vile man, a traitor, a tyrant and a parasite, he is incapable of empathy and is ready to betray anyone for personal gain. 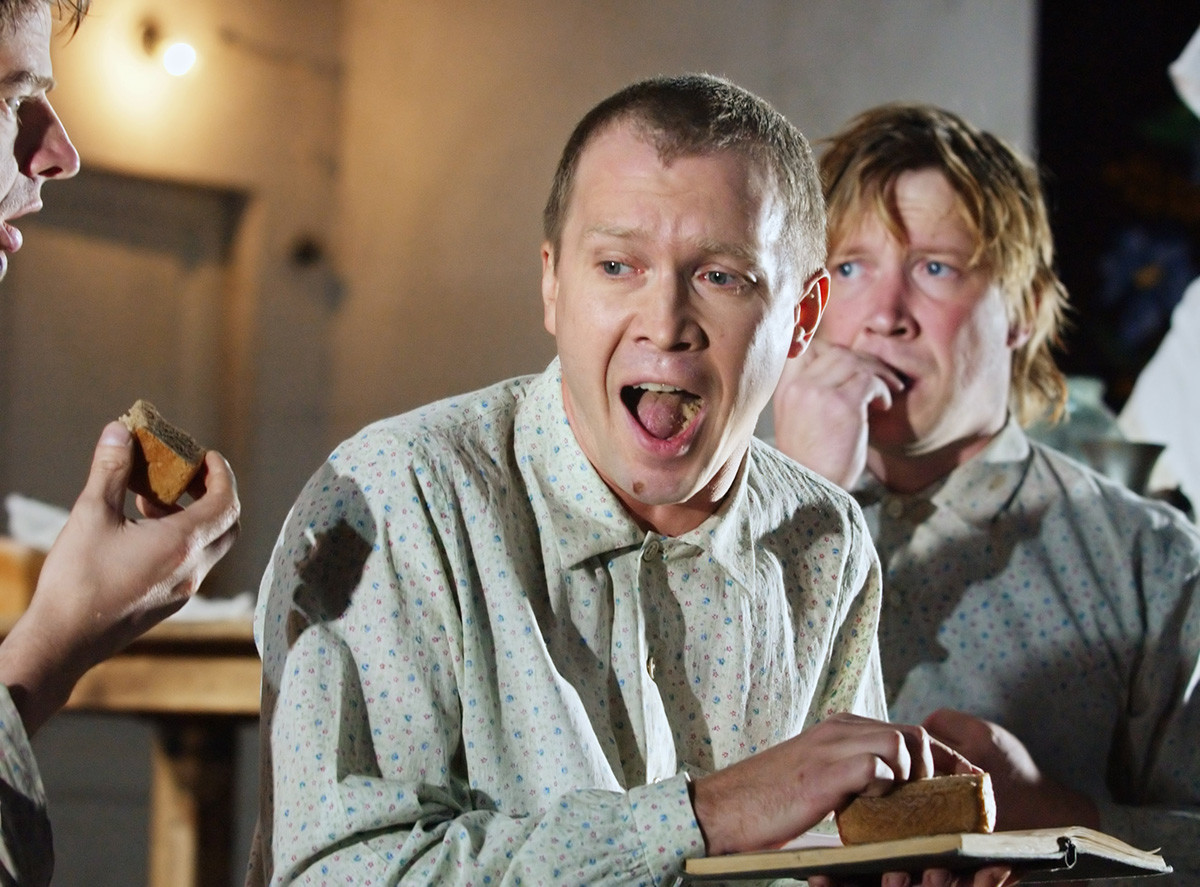 Actor Yevgeny Mironov as Porfiry Golovlyov during a performance staged by Kirill Serebrennikov at the Moscow Art Theater.

Judas’ eyes “exude enchanting poison”, while his “voice, like a snake, crawls into the soul and paralyzes the will”. The hypocritical man, nicknamed ‘Judas the Bloodsucker’, is a member of one bitterly dysfunctional Russian family plagued by excessive drinking, despair and madness. Driven by extreme greed, hatred and cruelty, ‘little Judas’ will single handedly drive all his close relatives to death without a single speck of remorse. “Unlimited slovenliness became the dominant feature of his relationship to himself. Long ago, he  became fascinated by this complete freedom from any moral restrictions…”

4. Alyona Ivanovna from ‘Crime and Punishment’ by Fyodor Dostoevsky 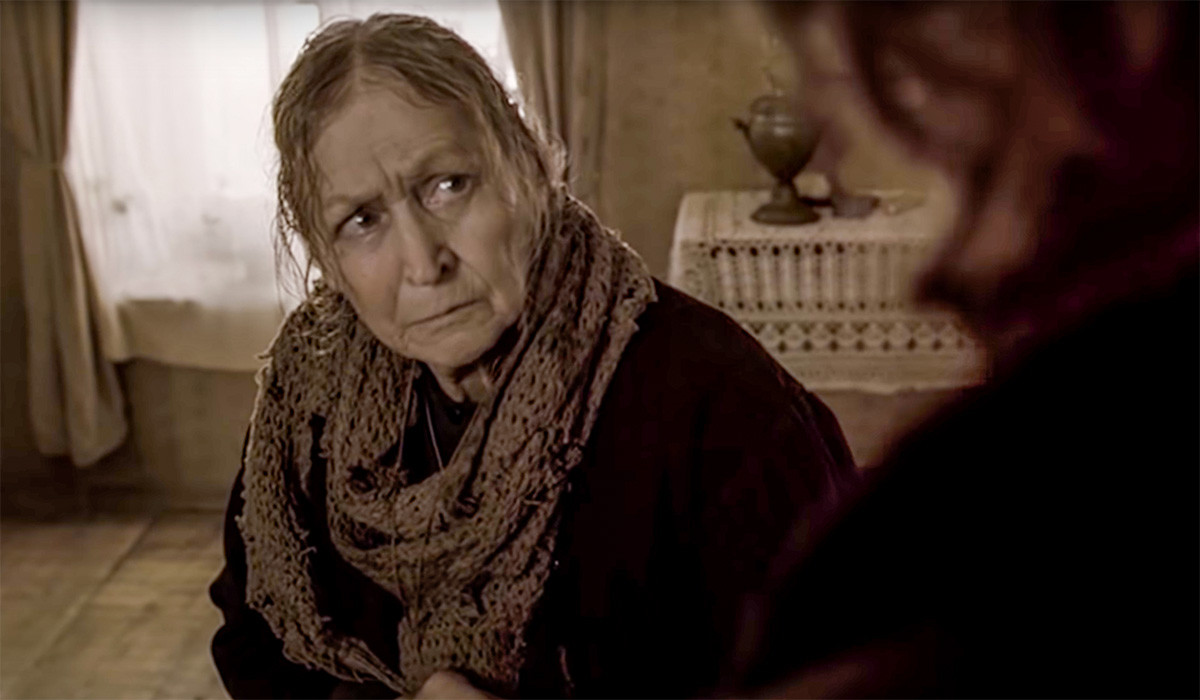 Alyona Ivanovna, who most likely suffers from tuberculosis, as she coughs all the time, sets up something akin to a pawnshop at home. She lends money at huge interest rates in exchange for jewelry and valuable things.

Dostoevsky doesn’t hide his contempt while describing her as a “dry, old woman with keen evil eyes and a small pointed nose… Her blond, slightly gray hair was greased with oil… She was so small and ugly…”

Her clients call her “a terrible bitch” and hate her like sin. If someone is even one day late with the redemption of the pledged property, the old capricious woman doesn’t allow the person to redeem their pledge. She treats her younger sister Lizaveta (who is pregnant) like a doormat. According to Rodion Raskolnikov, she is the “cause of suffering” of many people.

Alexei Shvabrin is the antonym of decency, rectitude and fair play. He makes romantic advances toward the captain’s daughter, Masha Mironova and even proposes to her, but refuses to accept “no” for an answer. 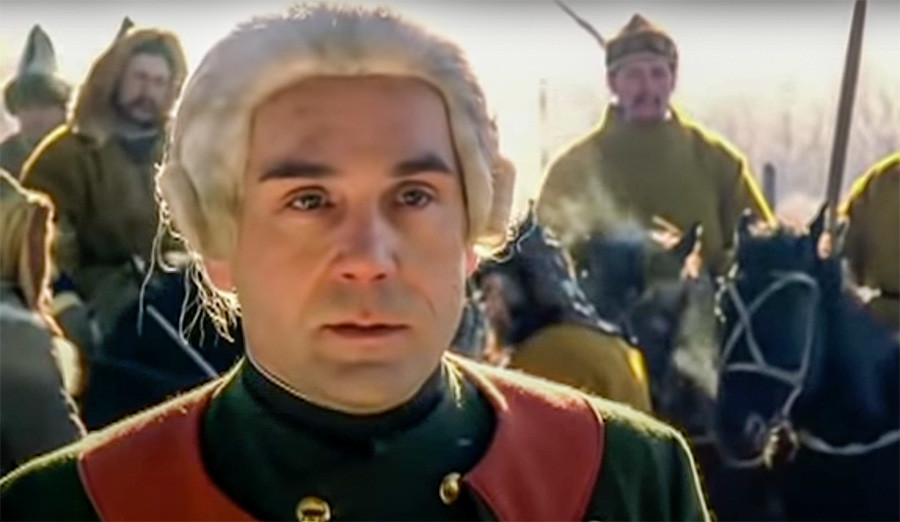 Pushkin describes Shvabrin as a “young officer of short stature, with a dark complexion and a superbly ugly, but extremely lively face”. A slanderer, but also a vindictive and a bitterly mean person, he cracks offensive jokes about the young woman in revenge. When the Pugachev revolt occurs, Shvabrin, who is a natural-born liar, acts like a traitor and joins the rebels to save his bacon.

6. Marfa Kabanova from ‘The Storm’ by Aleksandr Ostrovsky

Marfa Kabanova could probably enter the history books as the most nightmarish mother-in-law on record! A cruel and heartless old hag, she is jealous of her son’s love for his young and beautiful wife Katerina. 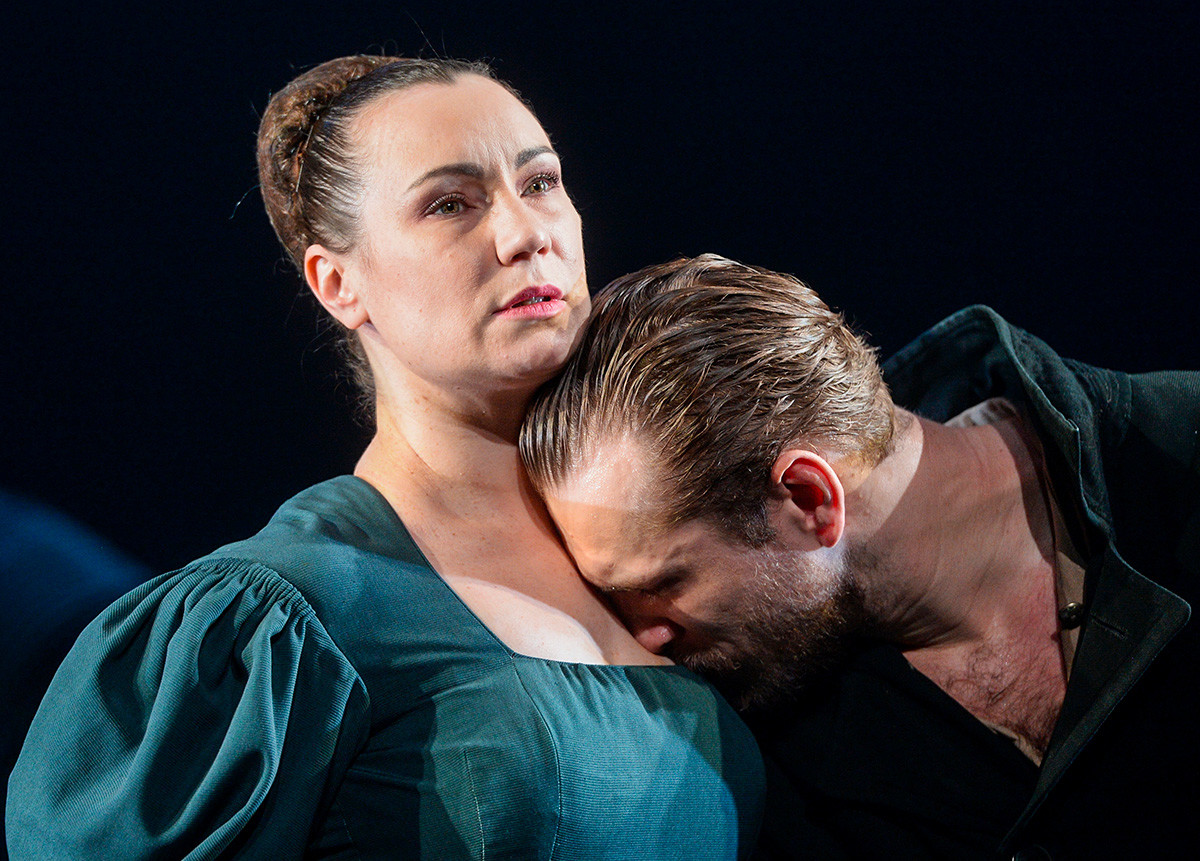 Actress Olga Tumaikina as Marfa Kabanova in a performance staged by Ulanbek Bayaliev at the Vakhtangov Theater.

The wealthy widow is constantly dissatisfied with something and keeps her entire family in terror and fear. Kabanova runs the house with an iron fist and offends both her children, Tikhon and Varvara, as well as her poor daughter-in-law, whom she eventually drives to suicide. “If you won’t be afraid of me, what kind of order will there be in the house?” Kabanova wonders. She is fanatically religious, but it’s only for show. Gestures of forgiveness, compassion and mercy are totally alien to her nature.

7. Sharikov of Mikhail Bulgakov’s ‘Heart of a Dog’

Poligraf Poligrafovich Sharikov is not your average neighbor. A doomed mongrel nicknamed ‘Sharik’ finds his new home in the spacious Moscow apartment belonging to the world-renowned surgeon. 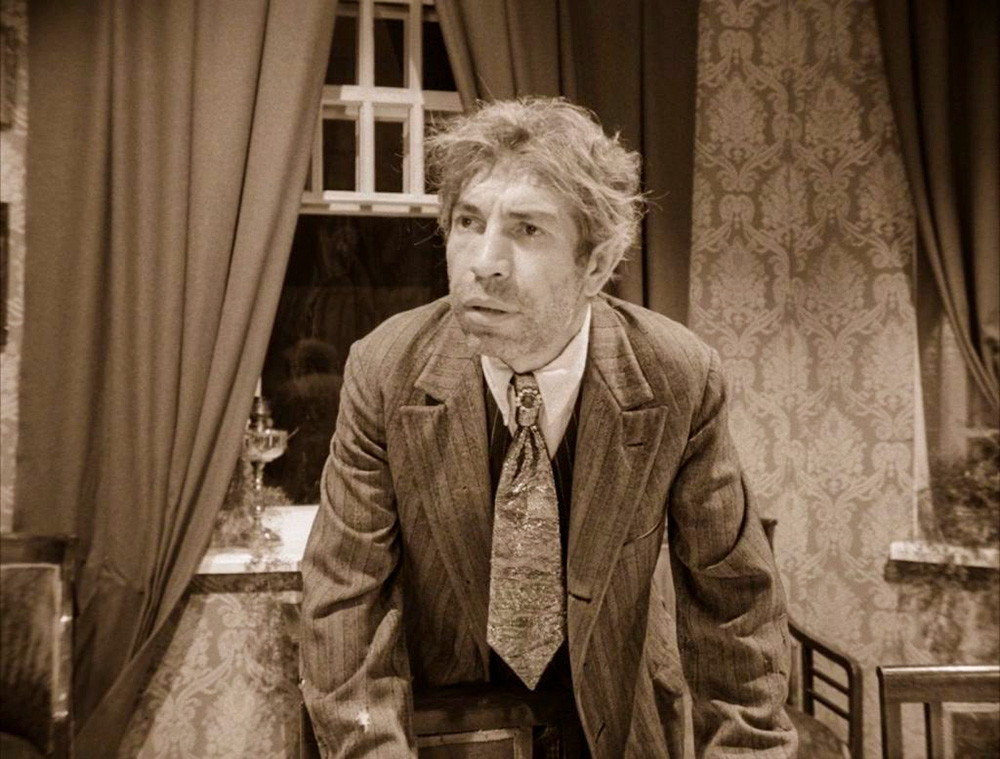 Professor Preobrazhensky embarks on a Frankenstein-like experiment and transplants a human pituitary gland into a stray dog. While the experiment is a huge success, the bad news is that the poor animal transforms into a real bastard who is only capable of drinking, smoking and swearing. “The most horrible thing is that he no longer has a dog’s heart, but a human heart. And the lousiest of all that exists in nature,” Prof. Preobrazhensky says.

Comrade Sharikov is the Bolshevik type of man to the core. Short and “unsympathetic in appearance”, he is so indecent and imprudent it almost makes you cringe. Similar to a leopard who never changes its spots, Sharikov behaves like a savage even after he formally becomes a man. His range of interests is very predictable. He finds his true aesthetic calling as the Soviet official in charge of purging Moscow of cats.

READ MORE: 3 KEY reasons why you should read Master and Margarita creator Bulgakov