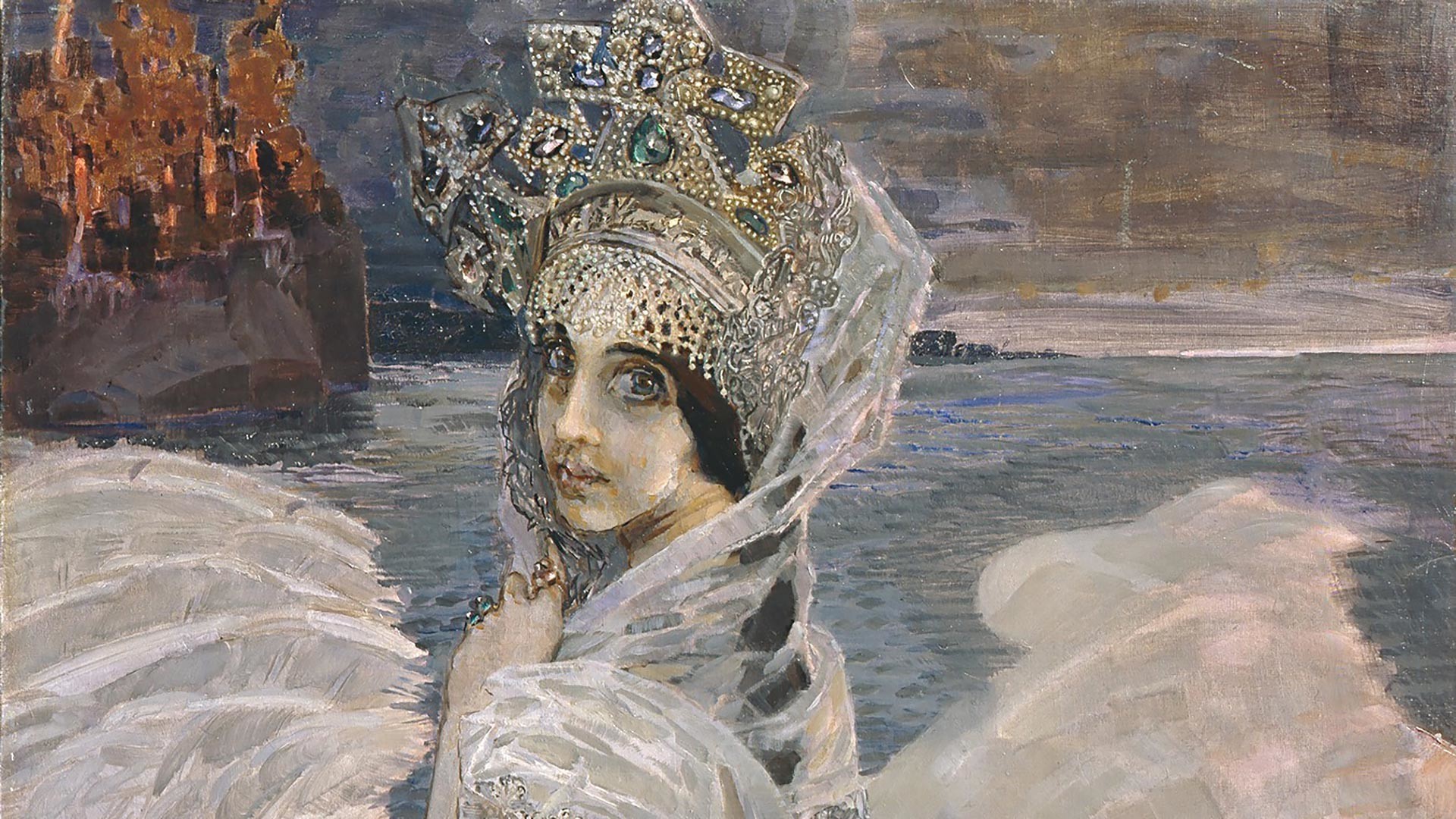 Tretyakov Gallery
A genius who blended Romanticism and Art Nouveau in a truly unmistakable style, Vrubel is the harbinger of the fin-de-siècle Russian avant-garde.

As befitted a child born into the nobility, Mikhail Vrubel was trained in various arts from an early age. Painting was not the only subject, no less time and effort were devoted to music. He was also immensely fond of literature, and his works are saturated with images inspired by folklore and mythology, Shakespeare and the romantic poets Goethe, Pushkin and Lermontov. As a young man, Vrubel loved opera, and would later make many sketches for various productions.

His artistic talent was first noticed when he created a heartfelt reproduction of Michelangelo's fresco The Last Judgment, having seen a copy of it at an exhibition. His father hired a drawing teacher for him, but nothing came of it. 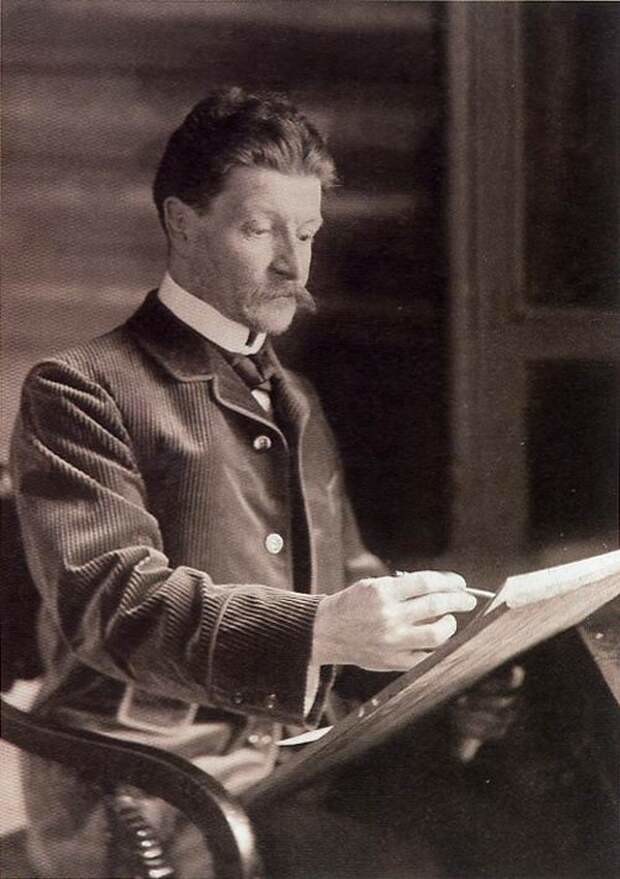 Vrubel went on to graduate from the law faculty of St. Petersburg University, work as a tutor and lead a bohemian, rather dissolute lifestyle — it was only at the age of 24 that he decided to enter the Imperial Academy of Arts and devote himself professionally to art. His first paycheck and recognition came from his major restoration of the murals of St. Cyril’s Church in Kiev.

Vrubel was a man of impulse, full of drive and passion, like his oeuvre. He alternated between working obsessively and falling into depression and drink. Society at large did not appreciate his work, describing it as decadent and even ugly. Physical disability was added to mental anguish at the age of 50, when he became confined to a wheelchair. Time and again, after long stays in the hospital and some brief glimmers of improvement, he slipped back, solidifying his reputation as a madman. Vrubel died in 1910. At his funeral, the great poet Alexander Blok, an admirer, delivered a eulogy, calling him "a messenger of other worlds." Let's plunge into these other worlds inhabited by Vrubel. 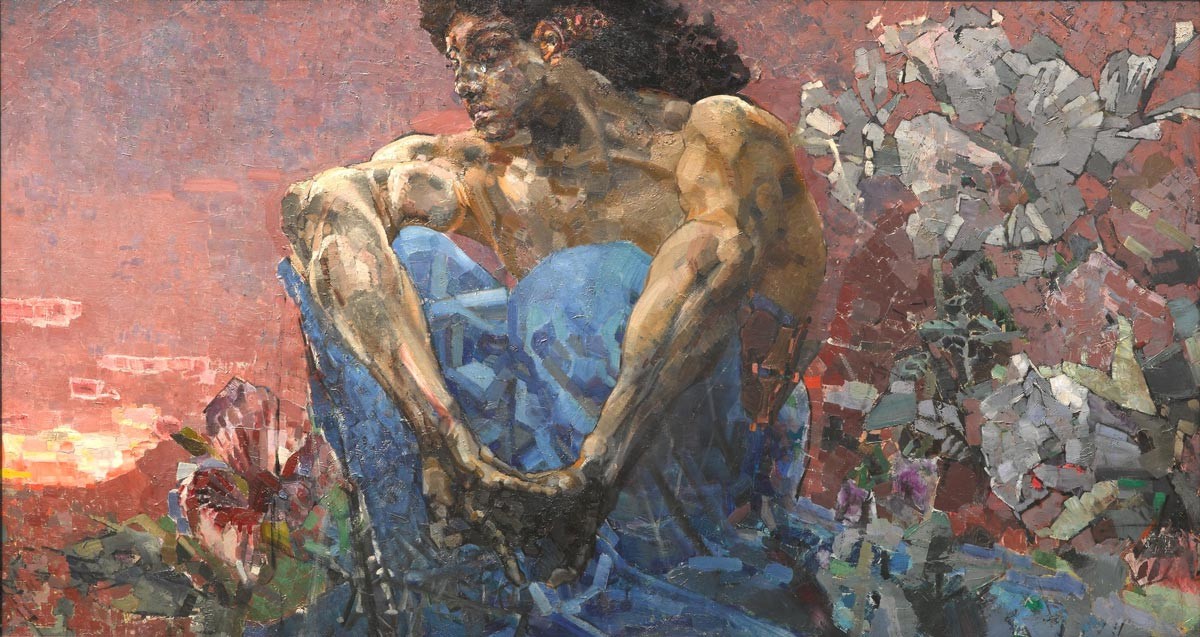 Vrubel nurtured the idea and image of his Demon for several years, and it is one of the first works to showcase his “crystal” style. The broad strokes made with a special spatula create the impression less of a painting than of a mosaic panel — a technique influenced by the mosaics of the Kiev cathedrals where he worked. The picture was inspired by Mikhail Lermontov's romantic poem The Demon, which tells of a fallen angel wandering the Earth, finding no peace anywhere. Vrubel had his own understanding of the central figure, who represents not evil, but rather suffering, and is at the same time majestic. In addition, Vrubel painted a series of watercolor illustrations for the same poem. 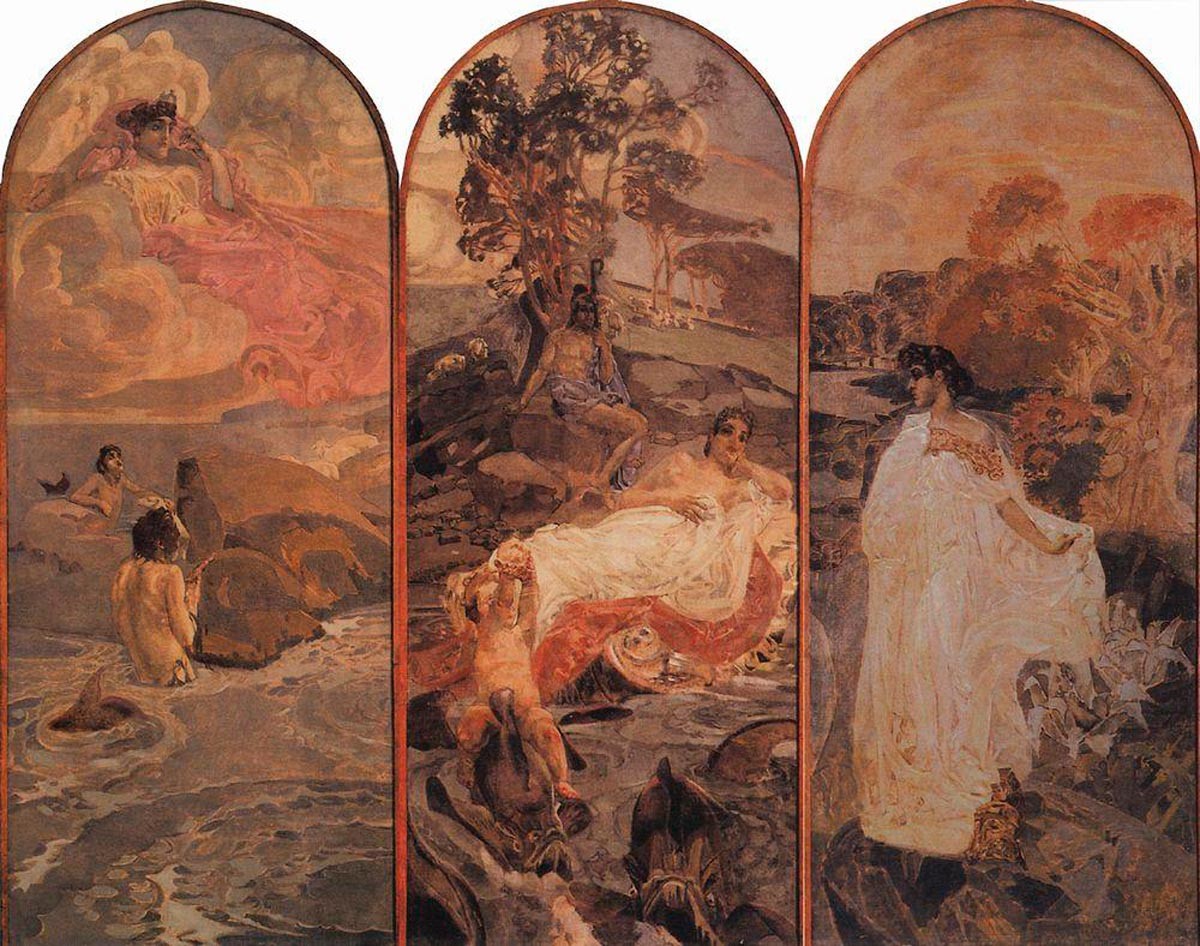 In 1889, Vrubel moved to Moscow, where he made the life-altering acquaintance of the major industrialist, philanthropist and art lover Savva Mamontov. The modernist, innovative Vrubel was not yet accepted in society, but Mamontov had a nose for artistic flair and commissioned the artist to decorate his Moscow mansion. Soon Vrubel was in demand with other art lovers. For instance, for the Dunker family home in Moscow, he created the incredible The Judgment of Paris triptych, which other clients had inexplicably turned down.

This huge canvas was commissioned again by Savva Mamontov for the pavilion at the 1896 All-Russian Art and Industrial Exhibition in Nizhny Novgorod. However, the Imperial Academy of Arts did not allow the picture to appear at the exhibition (read more about this mini-scandal here). 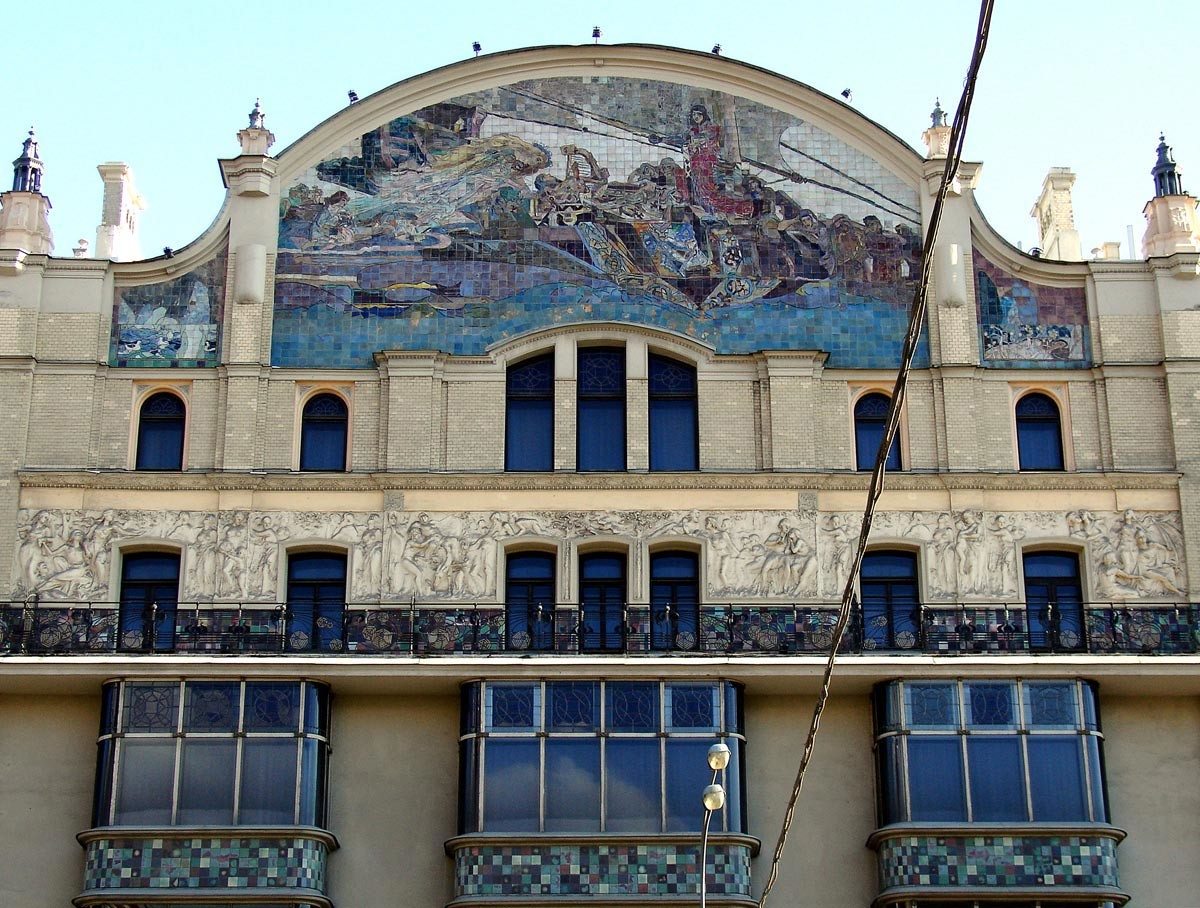 Instead, Mamontov ordered a mosaic copy of the painting to decorate the facade of the Metropol Hotel, the construction of which he funded in the early 20th century, opposite the Bolshoi Theater. The actual painting itself was kept for many years in the storage rooms of the Bolshoi Theater, before finally being moved to the Tretyakov Gallery in 2007. The building had to be specially reconstructed to house it, and a whole room dedicated to Vrubel appeared as a result. 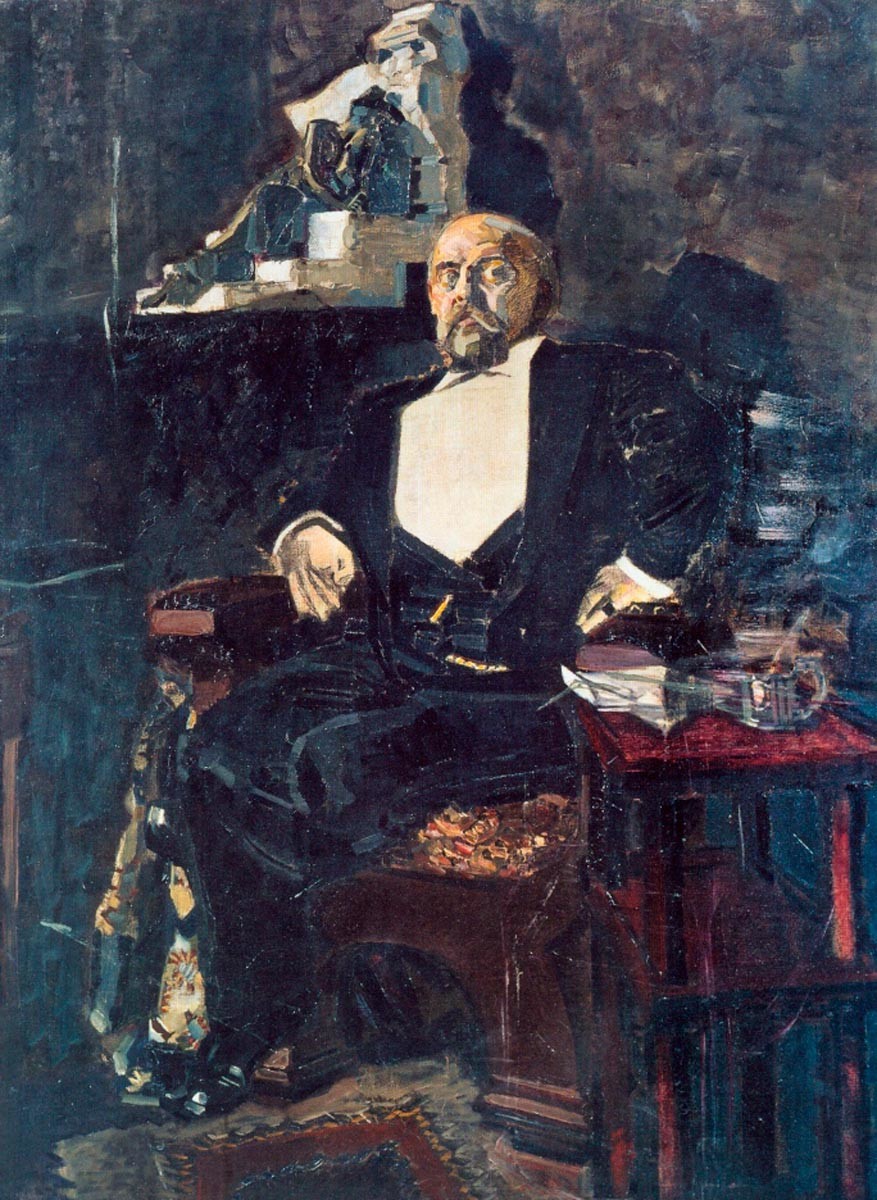 Vrubel painted few portraits of real people, but one of them was of his benefactor, Savva Mamontov. The dark, crooked image reflects the real-life drama in which the industrialist found himself. A prominent philanthropist, he was unjustly accused of embezzlement; soon after this portrait he was arrested and tried, but ultimately acquitted. But that did not avert financial ruin, forcing him to sell his property, including many works by leading artists. 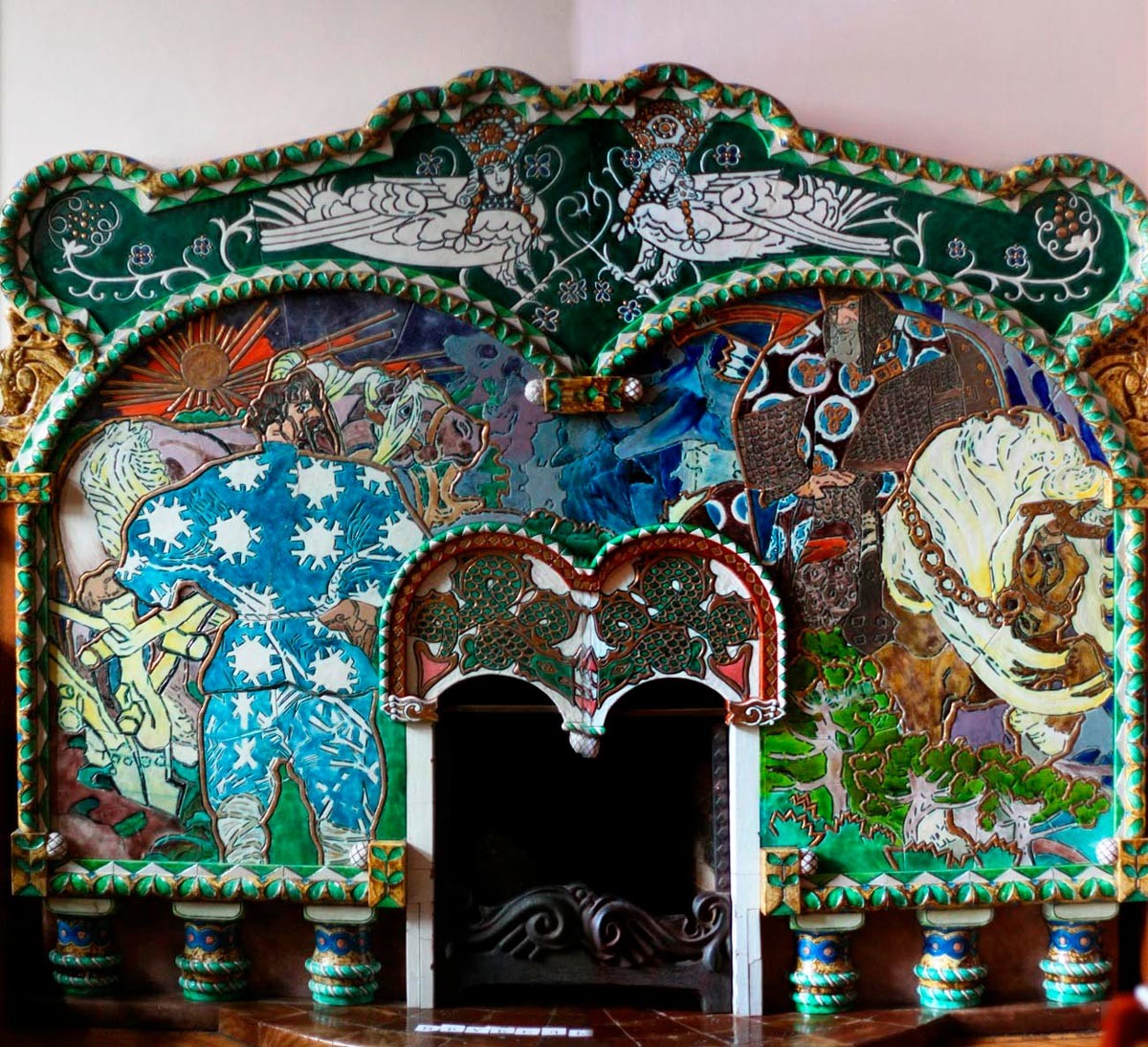 The Abramtsevo estate of Savva Mamontov was home to an entire artistic circle. Vrubel often stayed there and even set up a ceramic workshop, where he and his assistants turned his numerous sketches into stove tiles, majolica panels, sculptures and other decorative elements, predominantly with fairy-tale and mythological motifs. This folklore-themed work won a gold medal at the 1900 Paris Exhibition. A copy of it was made for Bazhanov House in Moscow, which was fully fashioned in the Art Nouveau style. 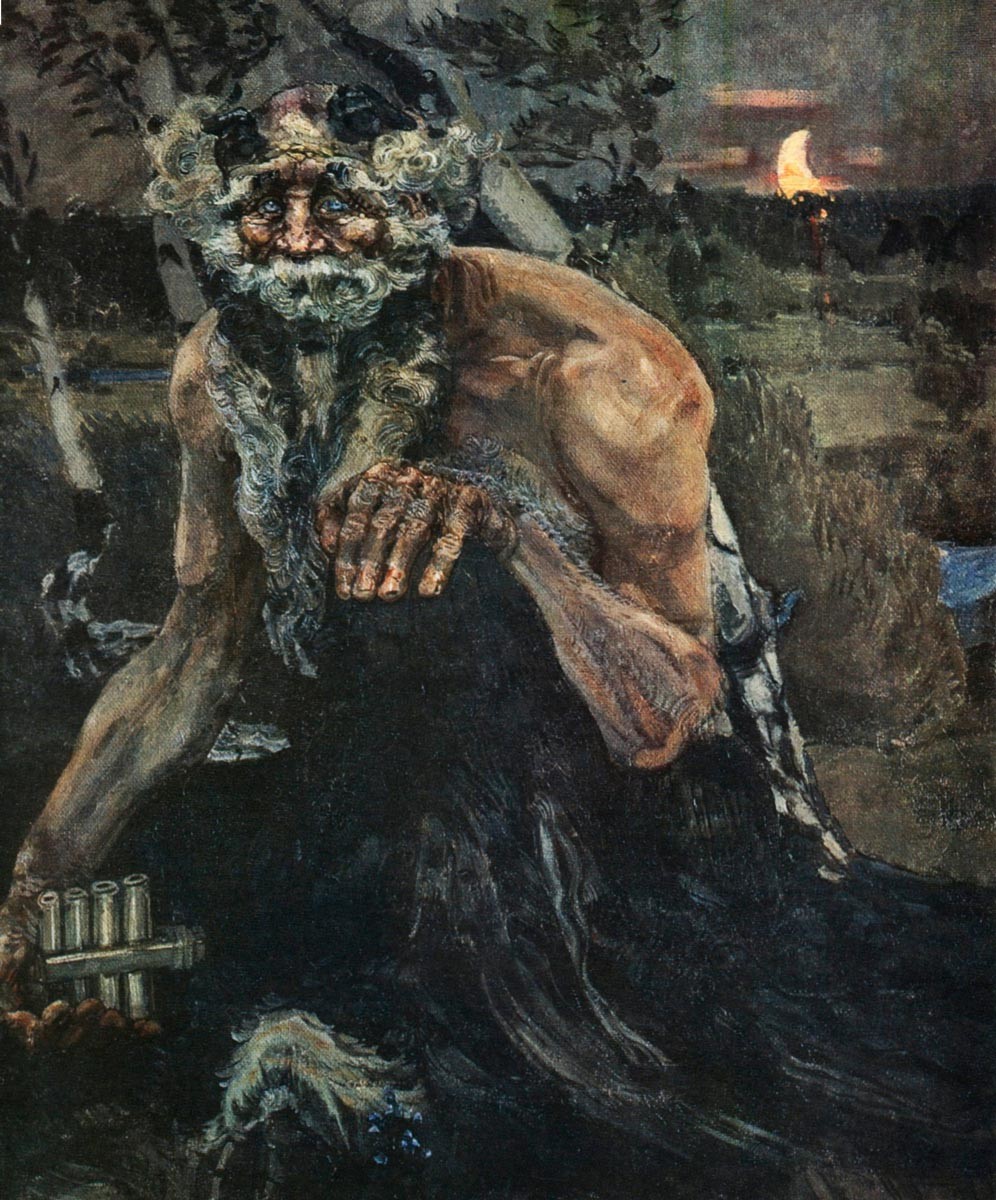 The “Russian style” was very much in vogue at the turn of the 20th century, and Vrubel was among those seeking to revive national folklore, in both ceramics and painting. Although this picture was painted under the influence of the story Saint Satyr by the aptly named French writer Anatole France, Vrubel transposes the ancient Greek mythical character to Russian soil. His Pan is more like a sprite, an otherworldly forest spirit lurking against the backdrop of a typically Russian landscape. 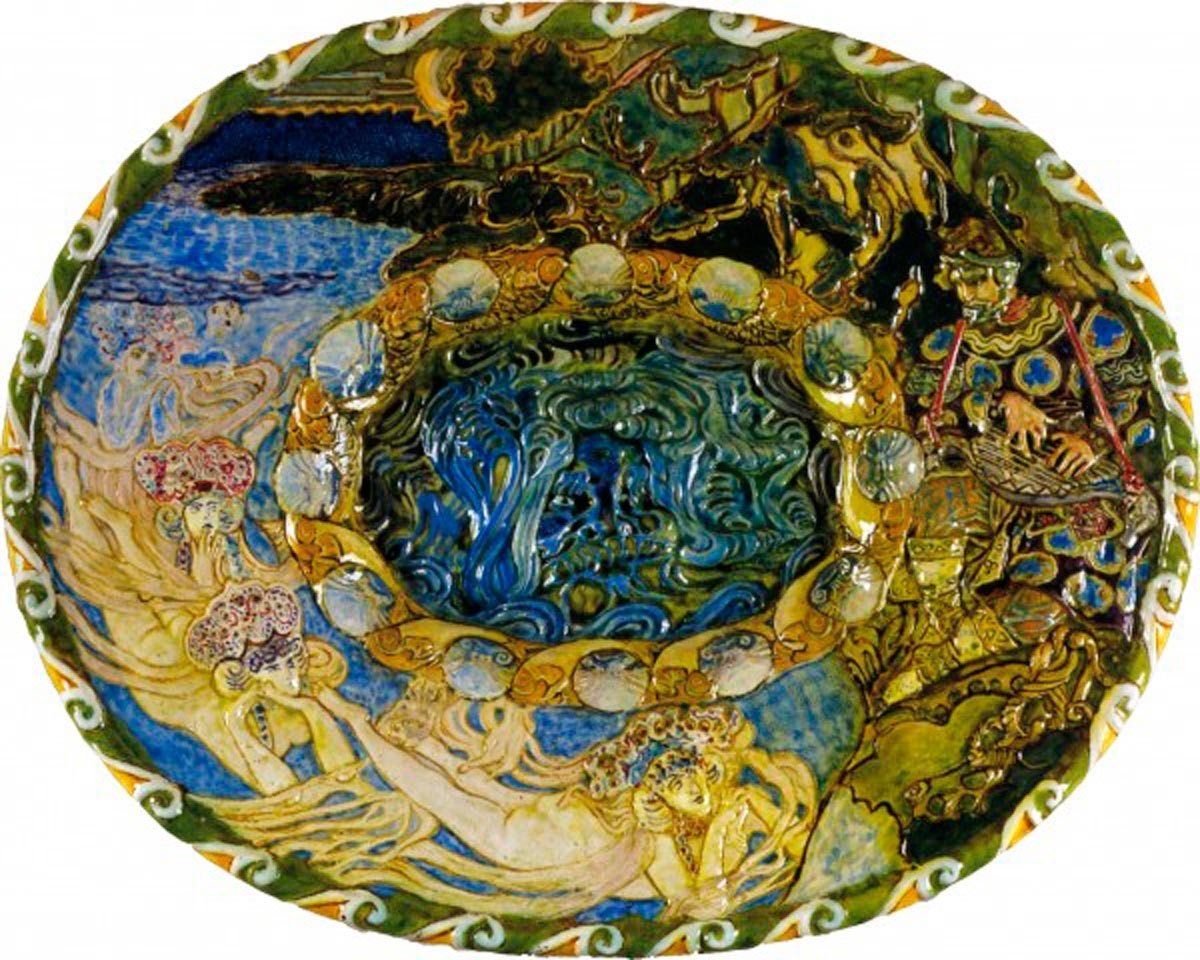 Vrubel designed the set for a production of Nikolai Rimsky-Korsakov's opera Sadko for Savva Mamontov’s private theater. This fairy-tale from Russian folklore inspired the artist to create a whole series of majolica sculptures of the opera characters: Sadko, the Sea Tsar, the Princess. This sumptuous dish portrays them and other inhabitants of the underwater world. 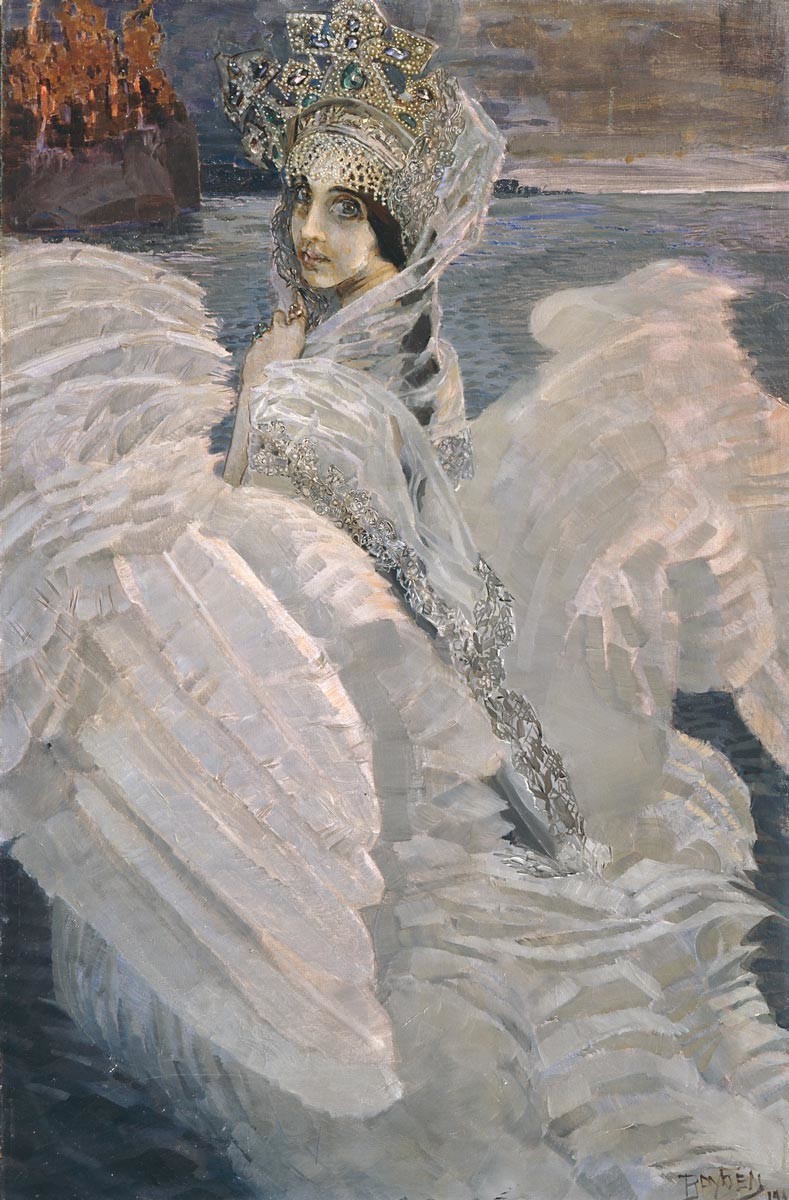 Like Pan, the Swan Princess is another fairy-tale creature that seems to exist between worlds. She is at once a beautiful girl and a bird, and the artist tries to capture the moment of this metamorphosis. The character was played by Vrubel's wife, singer Nadezhda Zabela-Vrubel, in another Rimsky-Korsakov opera, The Tale of Tsar Saltan, based on Pushkin's poem. However, many divine in this incredible image the likeness of a married woman whom Vrubel loved unrequitedly before marriage.

After his seated demon, Vrubel painted The Demon Flying, who soars imperiously over the world, and then ended the cycle with this third demon, tragically slain. This fractured figure lies against the backdrop of the Caucasus Mountains. The creation of this picture led Vrubel to another breakdown and hospitalization. Despite having produced many sketches in advance, he made endless alterations to the finished canvas. Vrubel's wife recalled how she observed the changes in the Demon with horror — on some days its face was fearful, on others it expressed “a deep melancholy and newfound beauty.” 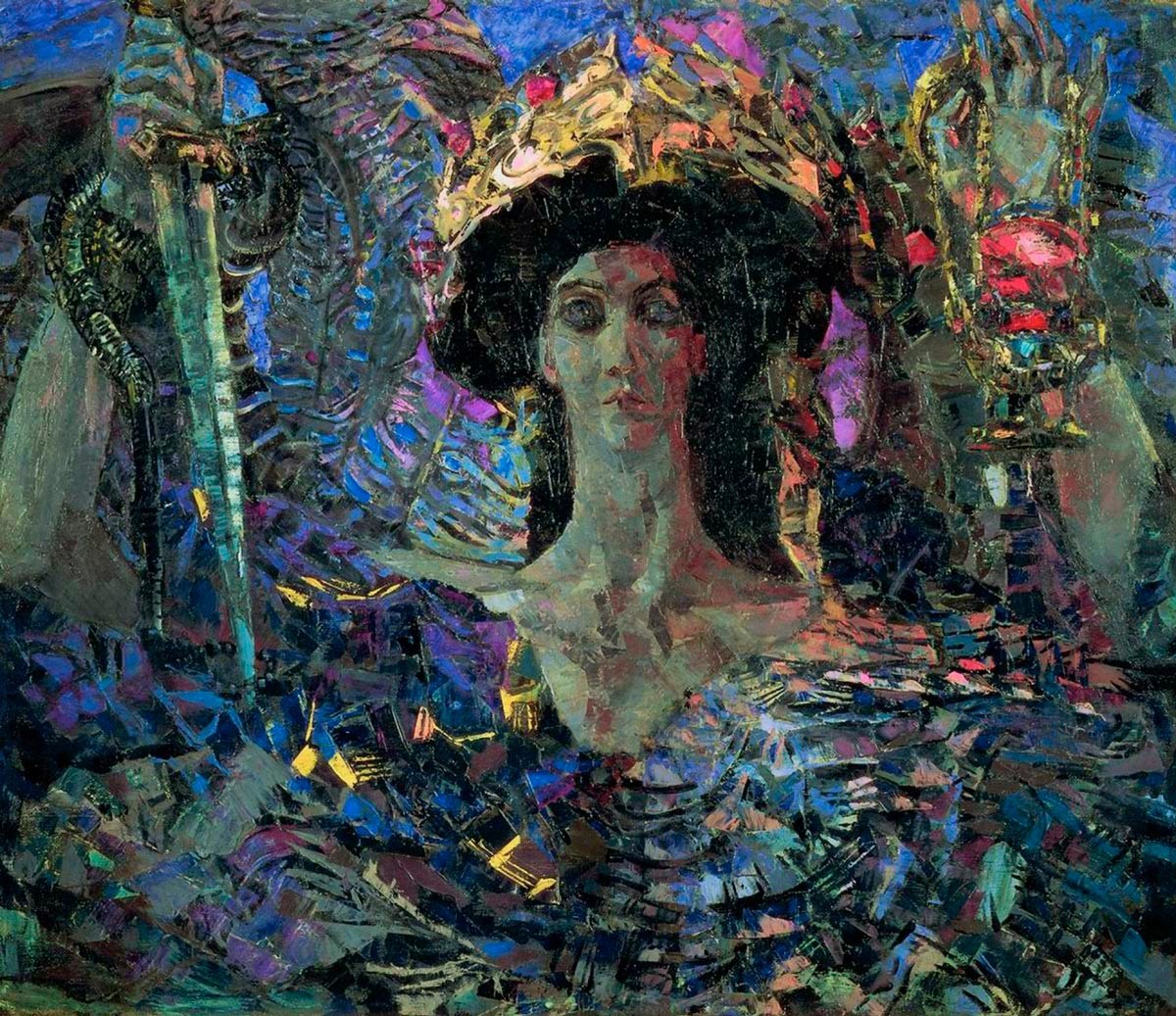 After Lermontov’s Demon, which had tormented him so much, Vrubel again turned to a complex creature: this time the hero of Alexander Pushkin's poem The Prophet, the awe-inspiring angel Seraphim, the fire-like emissary of God. Clasping a sword, Pushkin writes, he cleaves the benumbed narrator’s chest, plucks out his quivering heart and thrusts a fiery coal into the gaping wound, transforming him into a prophet who will “sear human hearts with the Word.” The artist painted the picture now in very poor health, racked by hallucinations. As with his Demon, he was perpetually dissatisfied with the facial features and repeatedly redrew them. 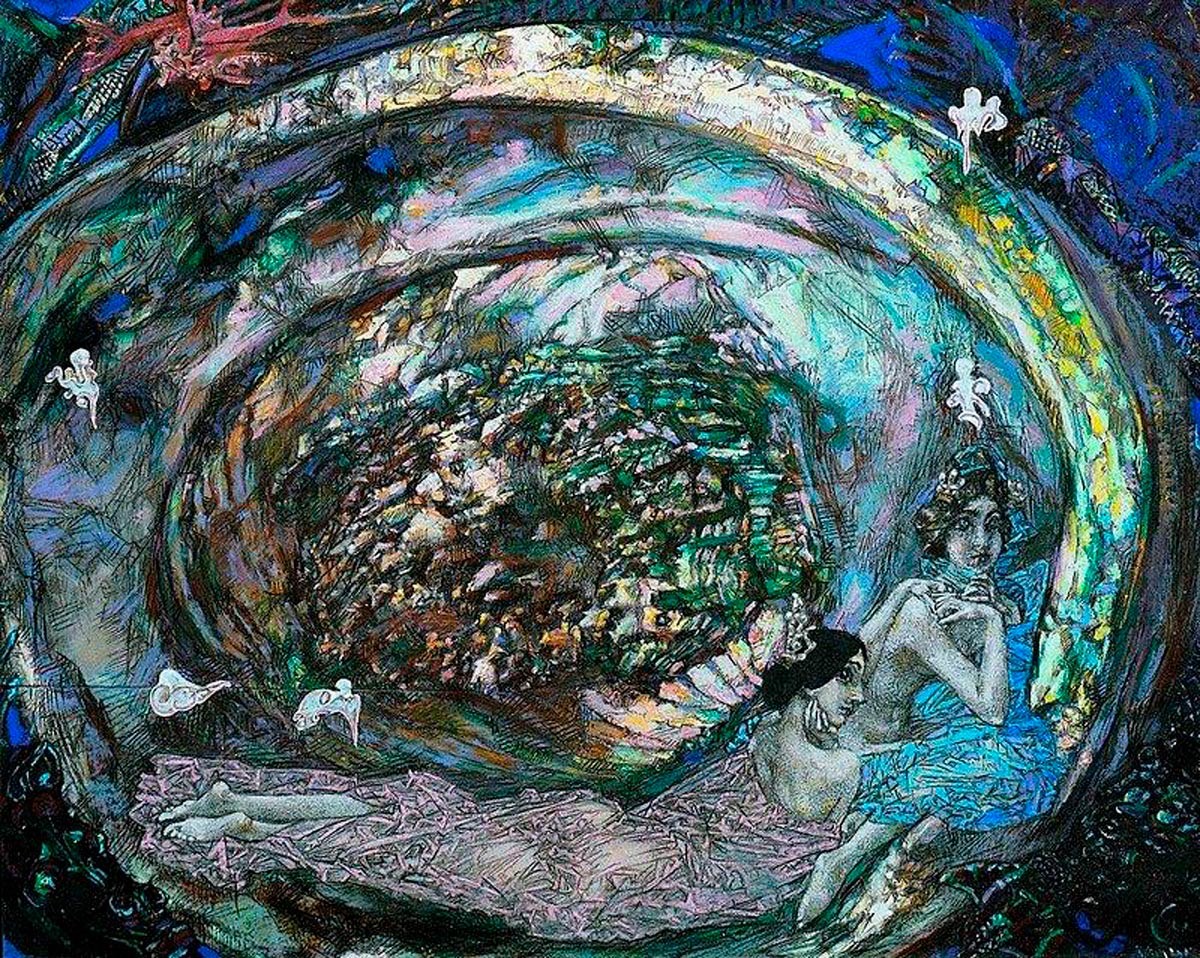 Initially, Vrubel was beguiled by the iridescence of mother-of-pearl, and it was this he tried to portray through color experimentation. The two sea princesses appeared in the picture almost by accident, when Vrubel supposedly “spotted” them in one of his sketches. They complement the picture by turning the oyster shell into a magical grotto. 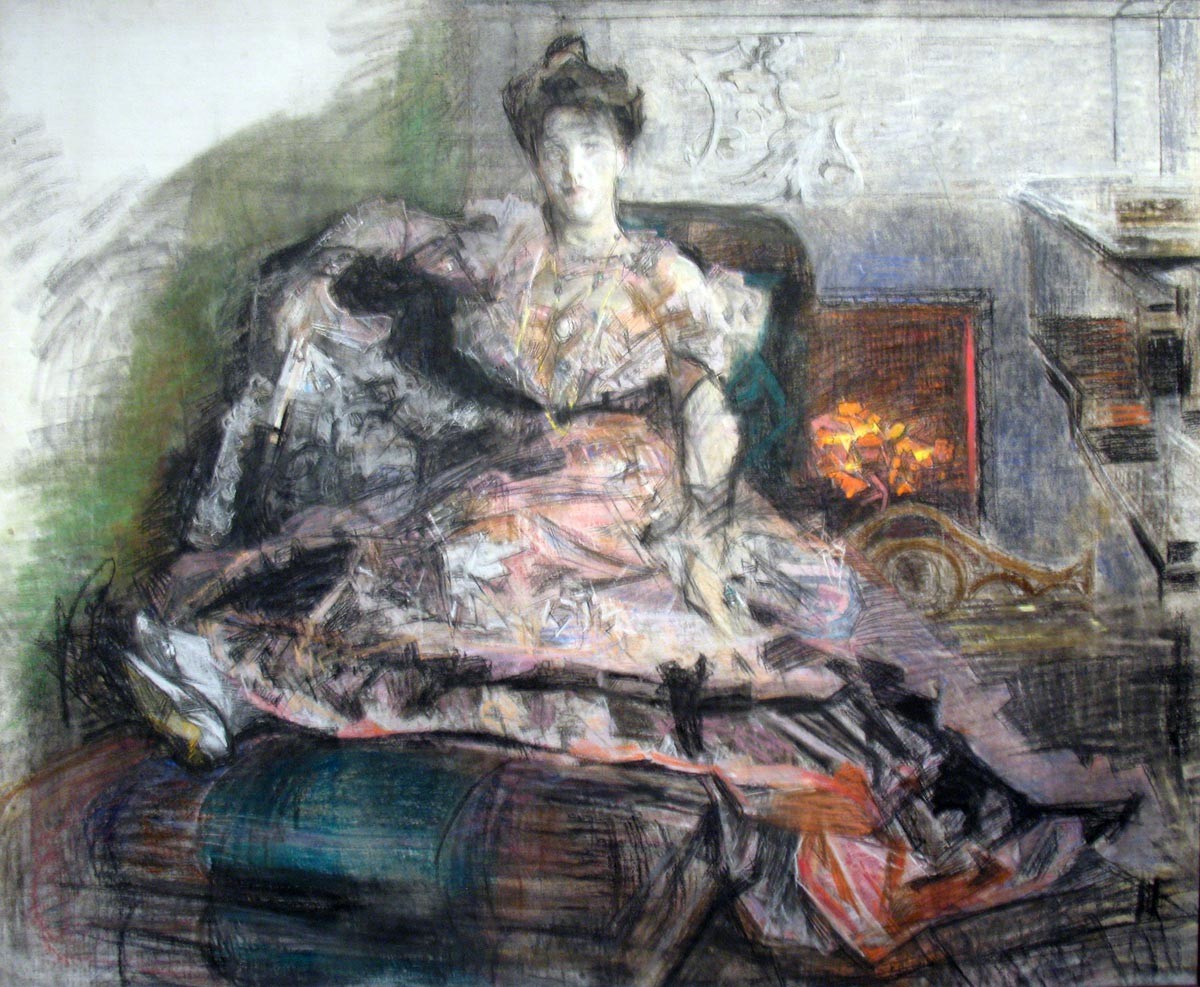 Vrubel painted many portraits of his wife, the famous singer Nadezhda Zabela-Vrubel. This is one of the artist’s last paintings, which sadly remained unfinished. It depicts his weary wife reclining on an armchair near the fireplace.

The exhibition of works by Mikhail Vrubel runs at the Tretyakov Galleryin Moscow until March 8, 2022.