10 modern paintings from the life of Peter the Great (PICS)

Culture
Russia Beyond
The year 2022 marks the 350th anniversary of the first Russian emperor’s birth. For this occasion, contemporary artists have painted some important scenes and plots from the life of the great Peter. 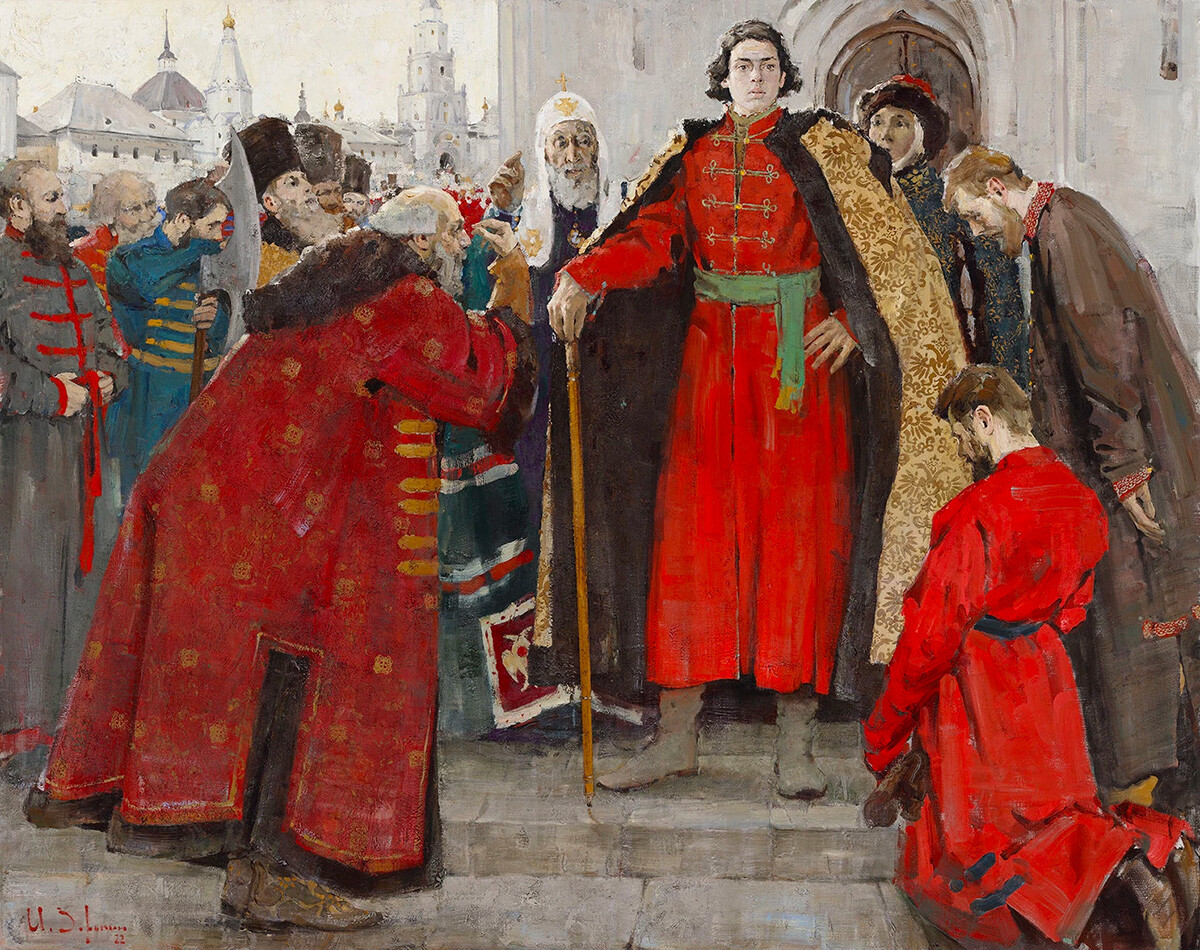 The above painting depicts Peter surrounded by the patriarch, the Streltsy and the boyars, who bow their heads to the tsar as a sign of loyalty and recognition of his authority. In 1689, Peter seized power from Princess Sophia, who had been regent to him and his disabled brother Ivan. 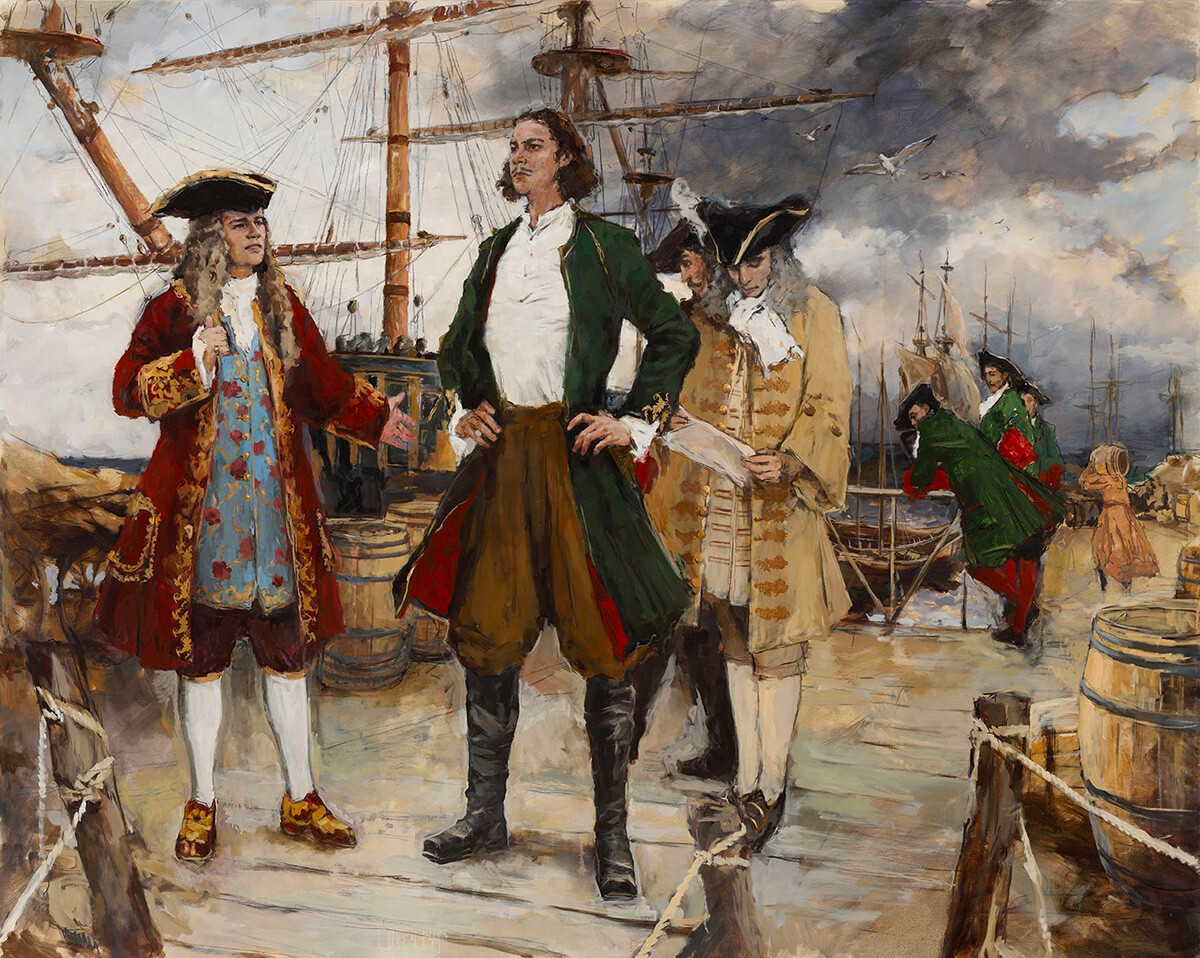 In 1693, Peter came to the city of Arkhangelsk, which, in the late 17th century, was the country’s main seaport and considered the only “window” to Europe. The tsar was amazed by the sight of real seafaring ships, he never left their decks and studied every detail. Together with a convoy of foreign vessels, the tsar even sailed his yacht 300 miles into the White Sea. 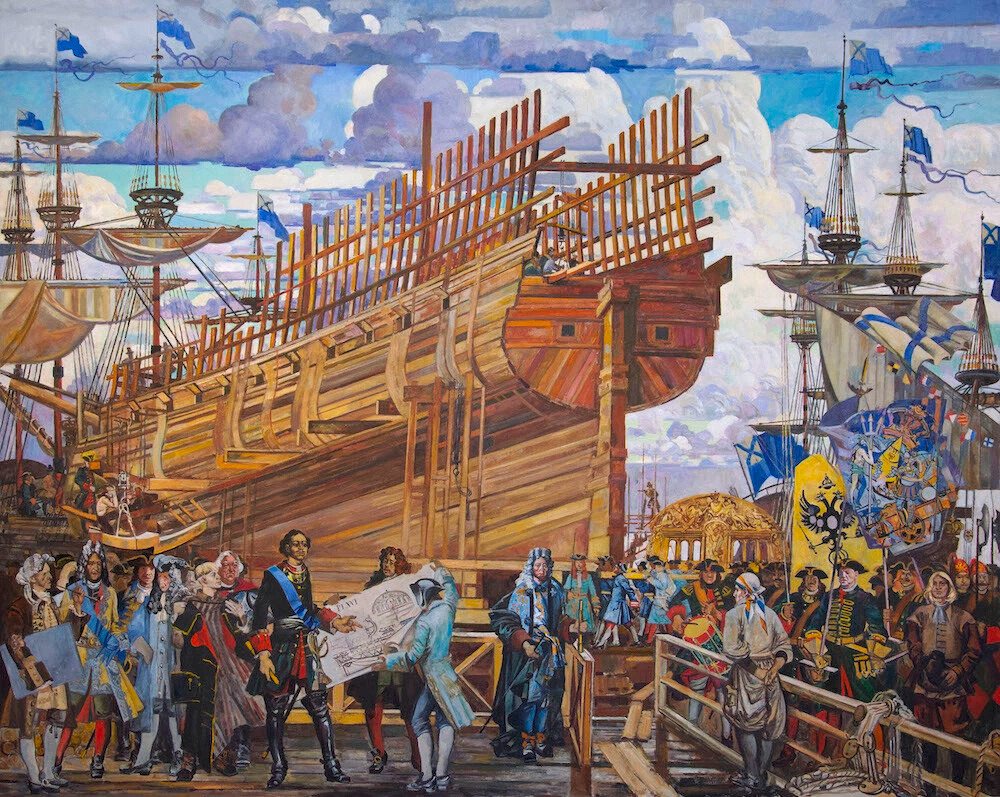 In 1697, Peter headed off on a great journey across Europe. The tsar stayed the longest in the Netherlands, where he studied shipbuilding. Back in Russia, Peter founded the Voronezh shipyard and began building the first ships for the Azov fleet. The tsar invited foreign masters and personally participated in the laying of the 58-cannon ship ‘Goto Predestinatsia’ (“The Providence of God”), the first Russian ship of the line. The tsar’s goal was access to the Black Sea. 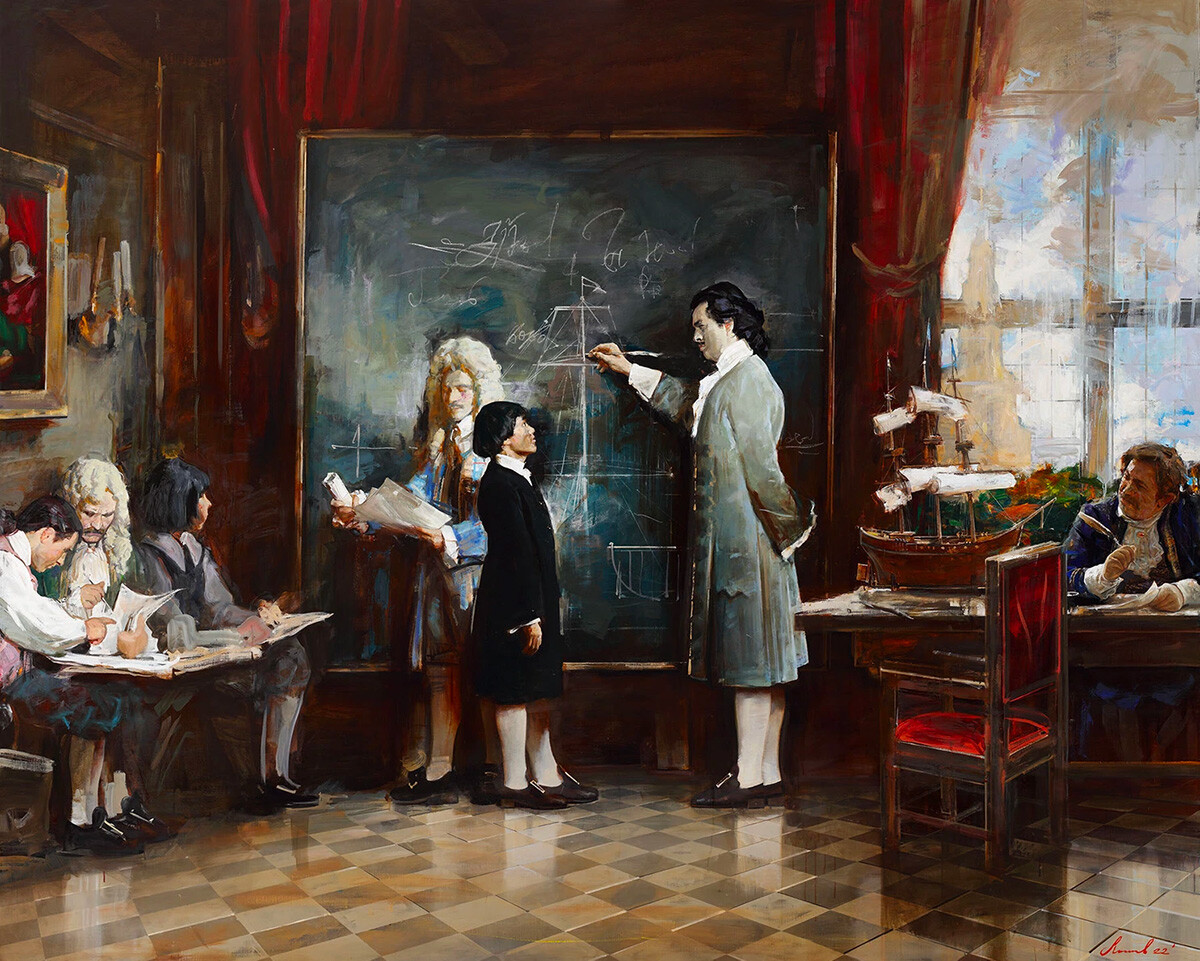 For his ambitious plans to reform Russia, Peter needed qualified specialists. He sent children from noble families to study abroad, primarily in naval schools - and later he examined them himself and tested their knowledge. Those who studied poorly were punished, the tsar made work as simple sailors.

5. Alexei Perepelkin. Public Life. The Assembly under Peter the Great, 2022 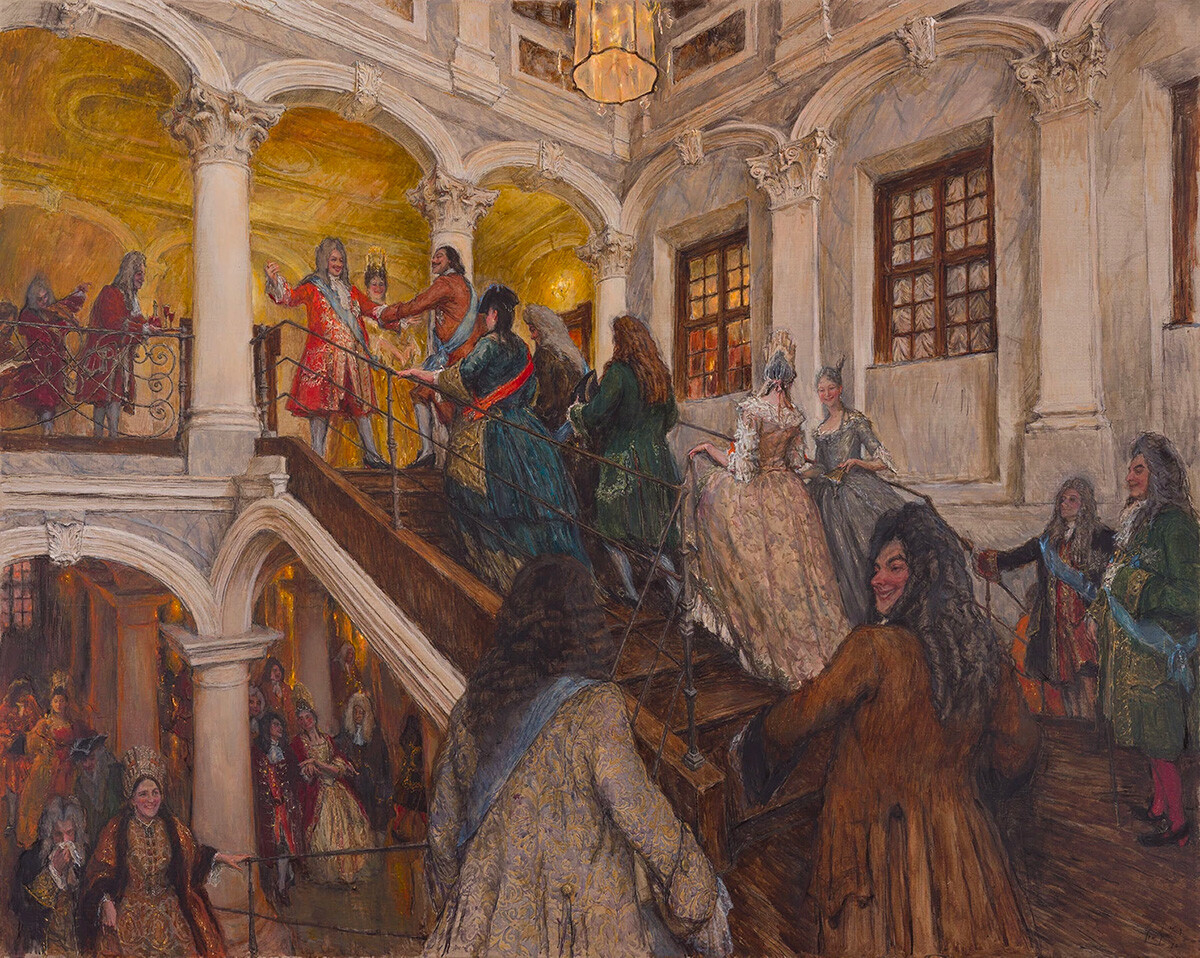 Peter reformed many things in the country - he ordered the nobles to shave their beards and dressed them in European clothes, while making the ladies bare their shoulders, which, for a long time, they couldn’t get used to and considered bawdy. Another innovation was the assemblies - free meetings of the nobility, where noblemen communicated, danced and had fun. 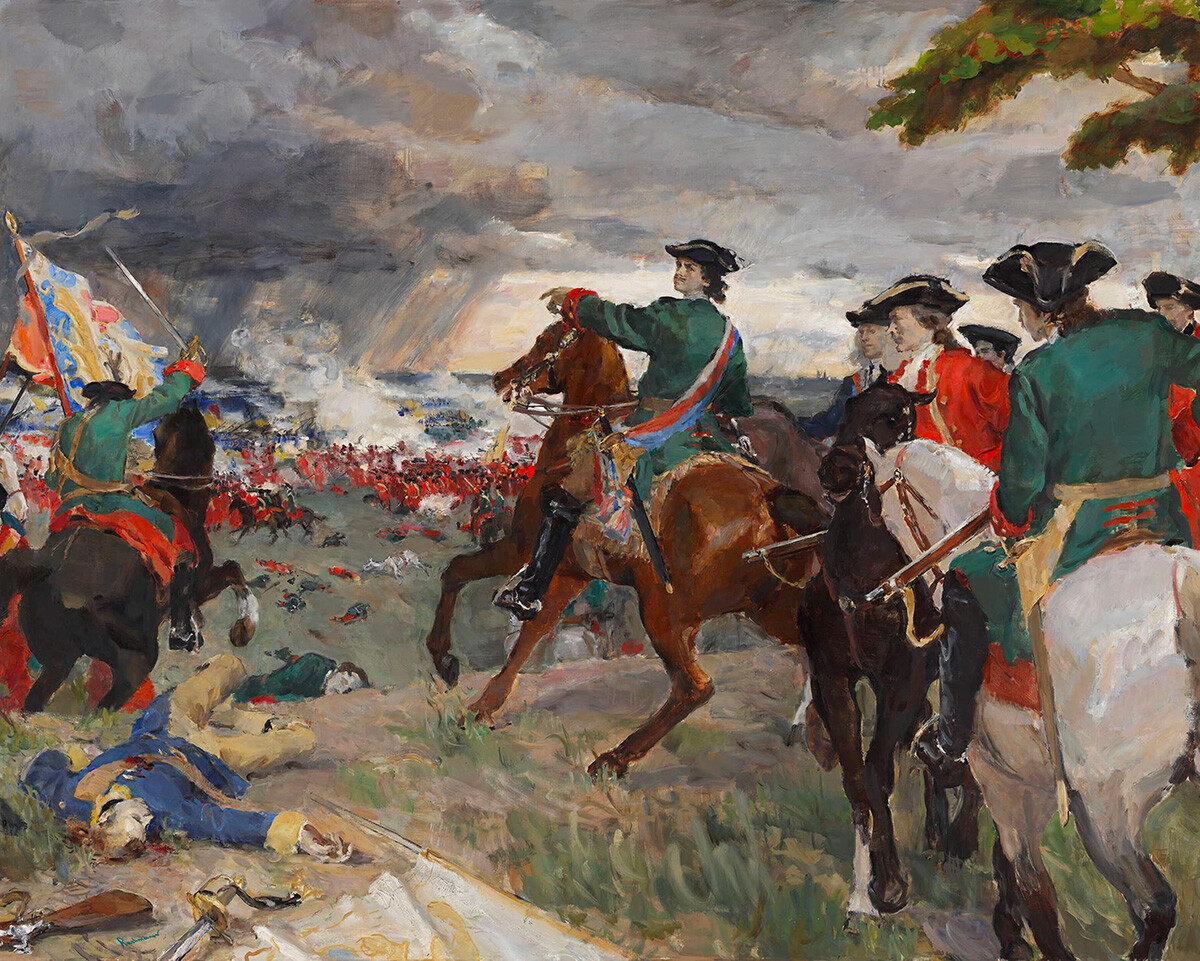 From the year 1700, Peter the Great entered a long war with Sweden, a.k.a. The Great Northern War. On September 28, 1708, a bloody battle took place on a small glade near the village of Lesnoy, which the Russian army won. It was one of the steps in turning the tide of the war - primarily because the Swedes had called off the offensive against Moscow. 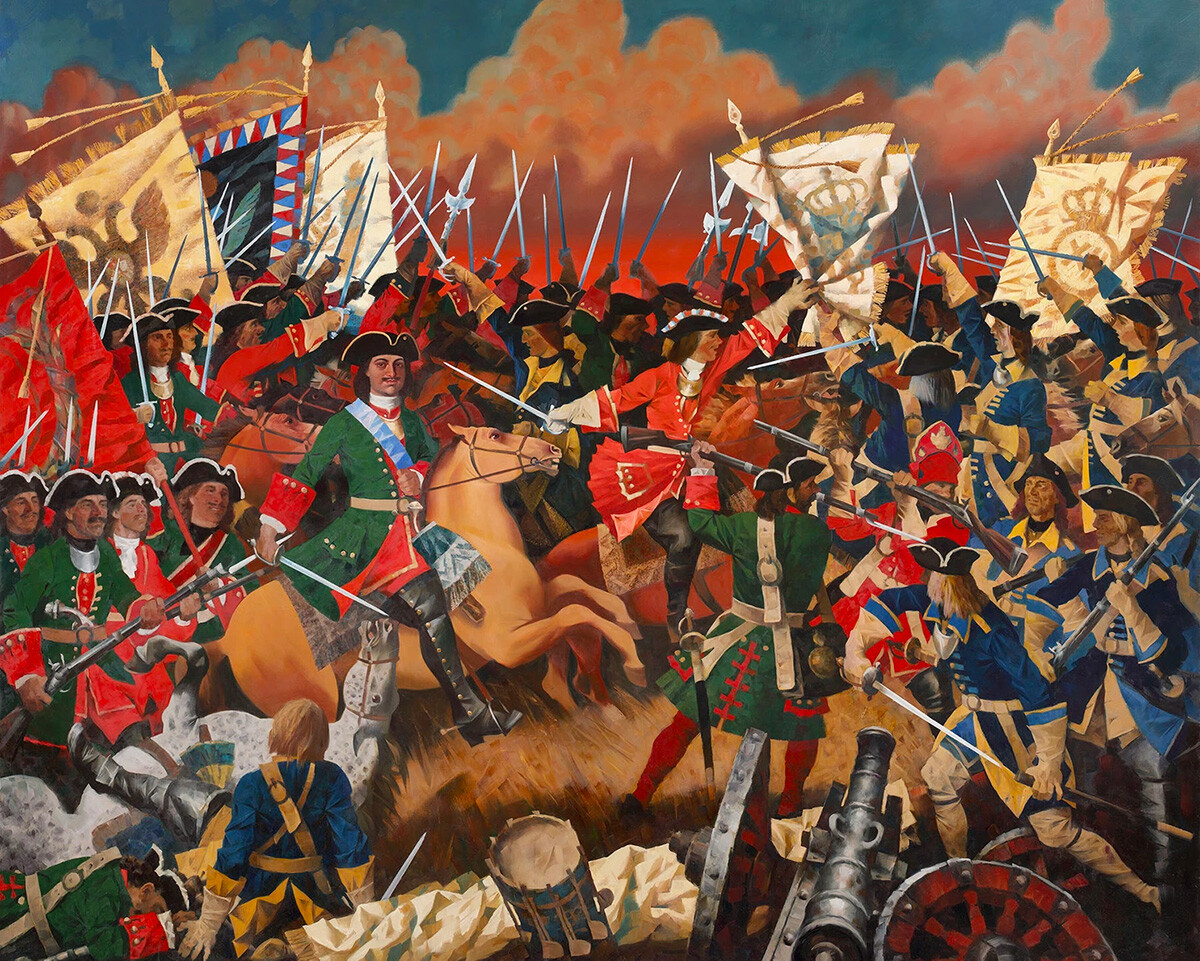 Refusing to attack Moscow, the Swedes turned toward Cossack Hetmanate (present-day Ukraine) and besieged the city of Poltava in the spring of 1709. During the Battle of Poltava, the Russian army defeated the Swedes, who fled the battlefield. The wounded King Charles XII fled to the territory of the Ottoman Empire. The victory at this battle was a turning point in the Northern War - from then on, only Peter was advancing. 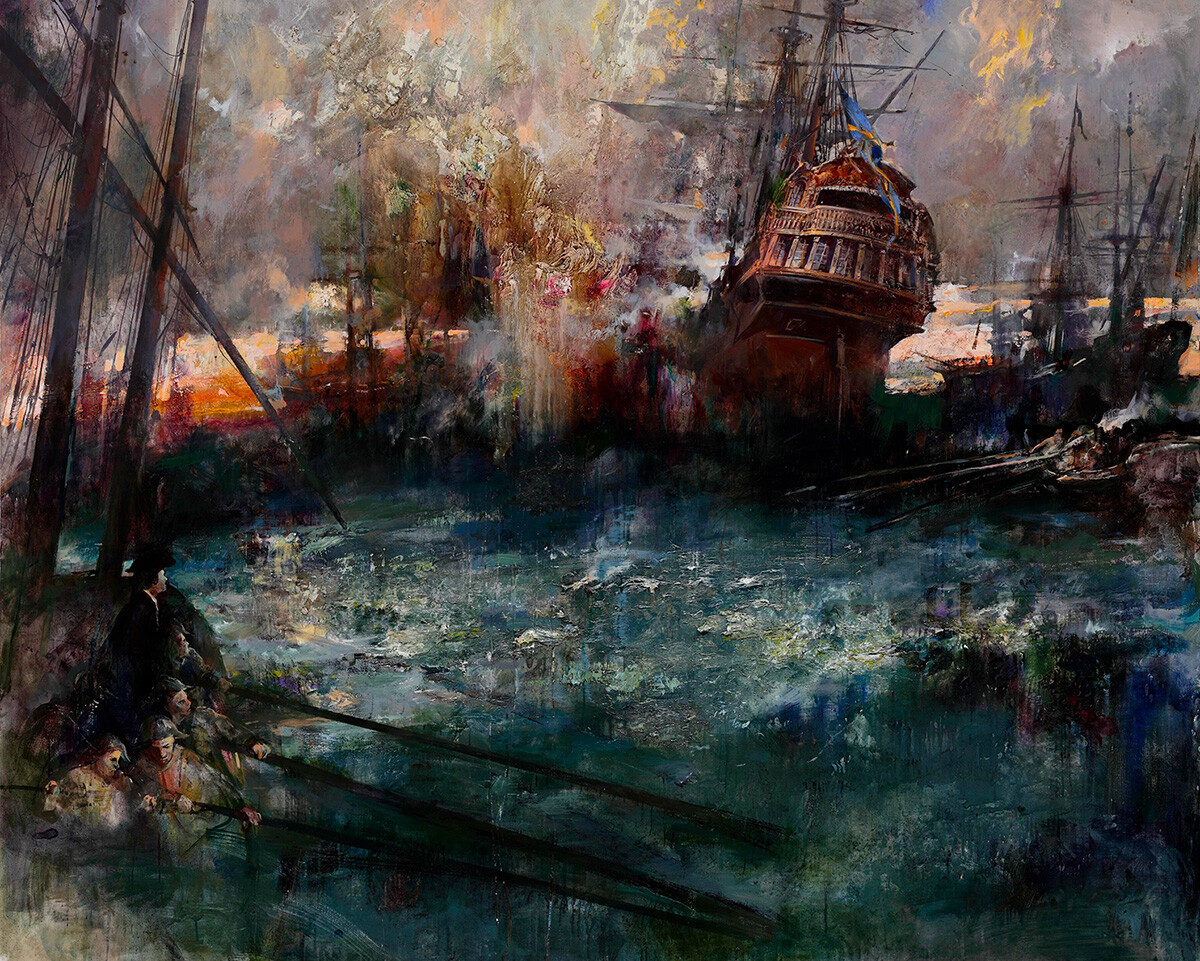 The Battle of Cape Gangut in 1714 is called the sea version of the Poltava battle. It was the first naval victory of the Russian fleet in Russia’s history - and is still marked as a day of military glory. 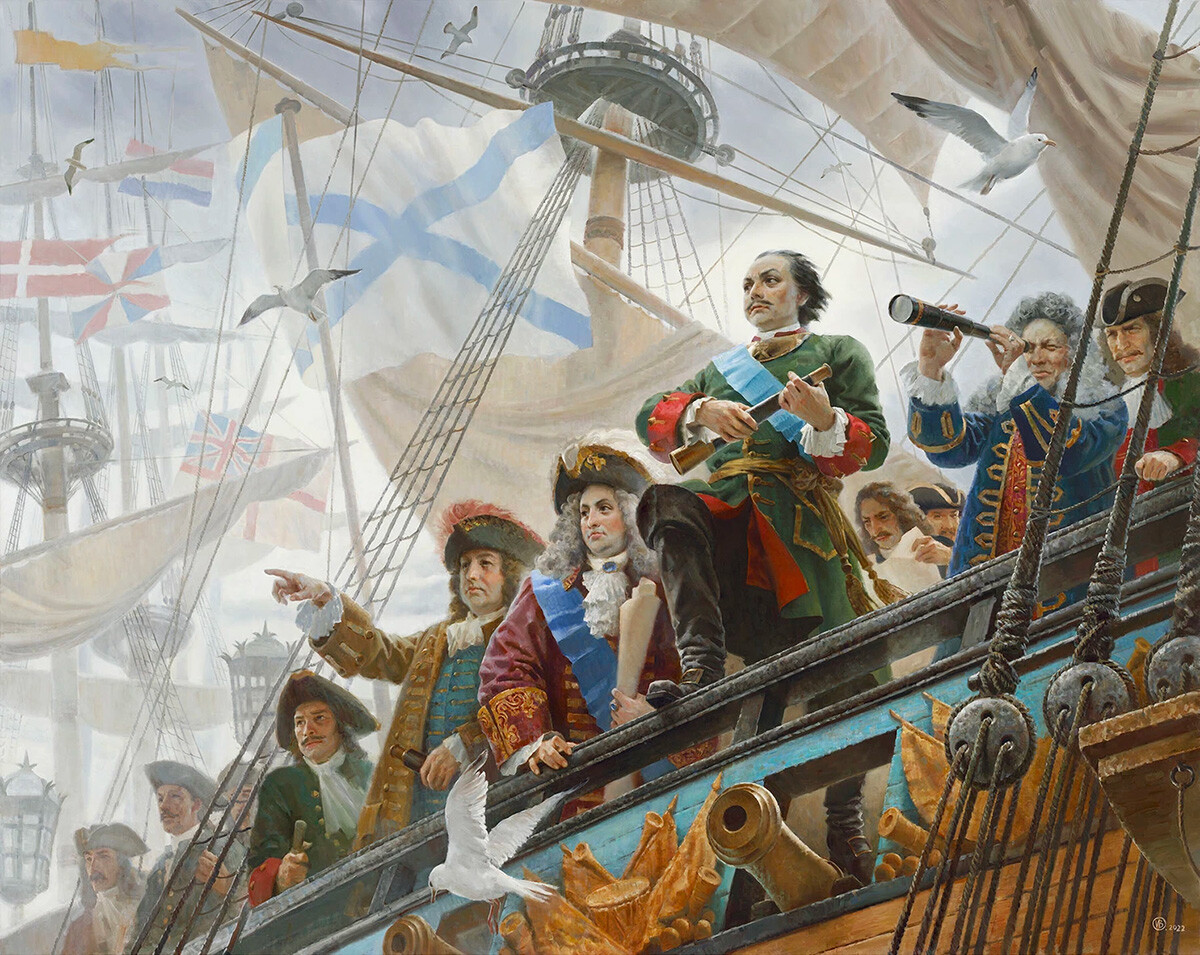 During the Great Northern War, Swedish privateers (authorized pirates) operated in the Baltic Sea. Russia, Denmark, England and the Netherlands joined forces to mop up the Baltic from the privateers and the Swedish fleet that backed them up. Above, Peter is depicted on the deck of the ‘Ingermanlandia’ ship, surrounded by European admirals.

10. Ksenia Karpenko. Peter the Great as Emperor. Ceremony in the Trinity Cathedral of Alexander Nevsky Lavra, 2022 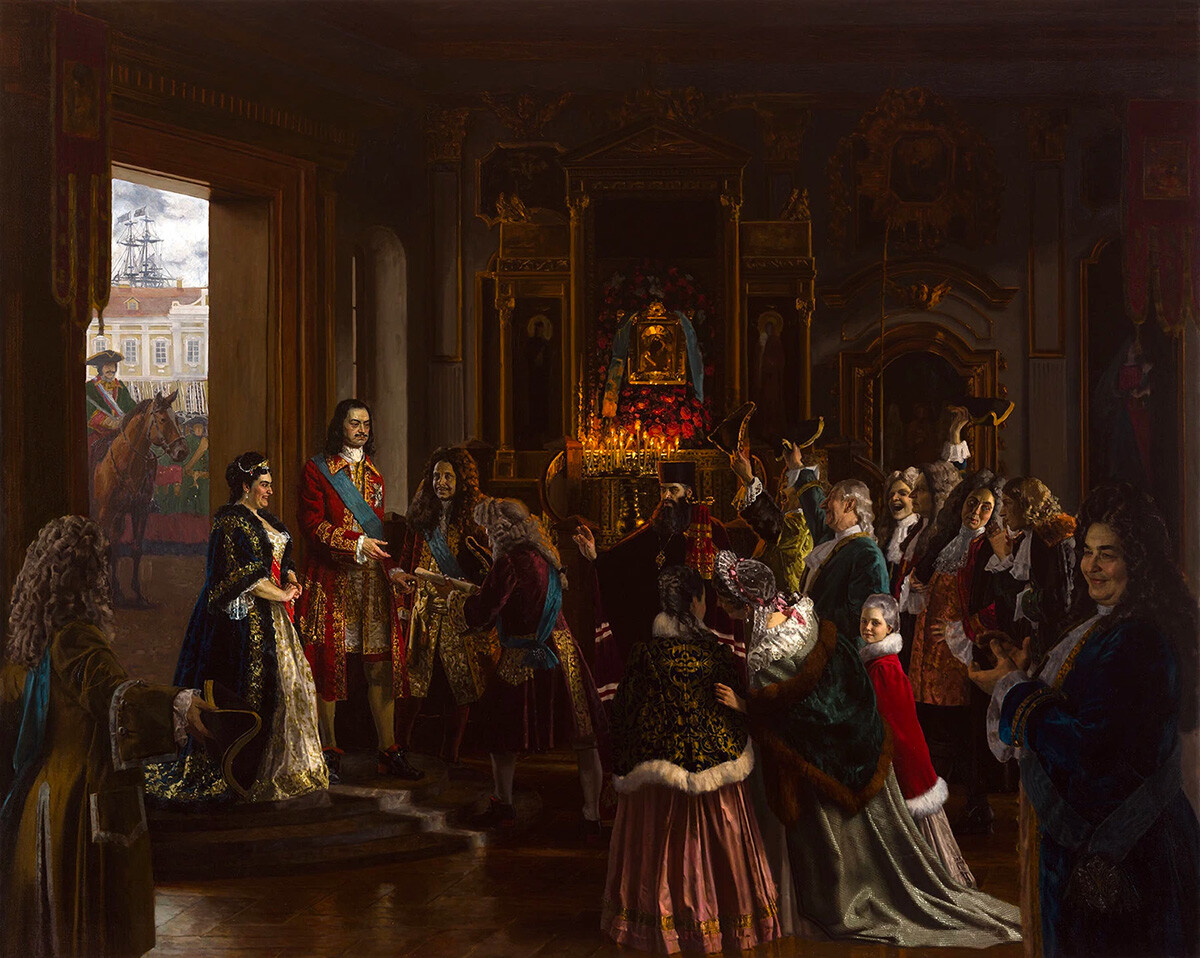 After winning the Great Northern War against the Swedes, in 1721, Peter declared Russia an Empire and he himself became the first Russian tsar to assume the title of emperor.