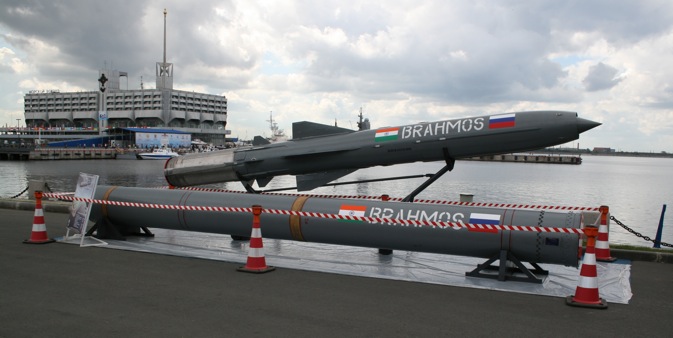 Brahmos is modelled on the Russian-designed 3M55 Yakhont (SS-N-26) missile. Source: One half 3544/wikimedia.org

The missile was launched vertically from a submerged platform in the Bay of Bengal and flew its complete range of over 290 kilometres.

The missile was launched vertically from a submerged platform in the Bay of Bengal and flew its complete range of over 290 kilometres, BrahMos chief executive Sivathanu Pillai said.

Ship- and ground-launched versions of BrahMos have been put into service with the Indian army and navy.

The BrahMos missile has a range of 290 kilometres (180 miles) and can carry a conventional warhead of up to 300 kilograms (660 pounds). It can effectively engage targets from an altitude as low as 10 meters (30 feet) and has a top speed of Mach 2.8, which is about three times faster than the US-made subsonic Tomahawk cruise missile.

Brahmos is modelled on the Russian-designed 3M55 Yakhont (SS-N-26) missile.

Flight tests of the airborne version had been slated for completion by the close of 2012. Pillai told media in November that development of the missile was three years behind schedule. The Indian Air Force is planning to arm 40 Su-30MKI Flanker-H fighters with BrahMos missiles.

India again asks Russia to induct BrahMos in its fleet

BrahMos is based on Russian technology and is developed by BrahMos Aerospace (BMA) - a joint venture company created in 1998. BMA is 50.5 percent Indian Government owned and 49.5 percent by the Russian Government. The name BrahMos is derived from two rivers, India's Brahmaputra and Russia's Moskva.

Russia has not announced any plans to use the BrahMos missiles. Indian Defence Minister A K Antony, last year, asked Russian Deputy Prime Minister Dmitry Rogozin to start inducting the BrahMos missiles in the Russian naval fleet to further strengthen the joint venture between the two countries.