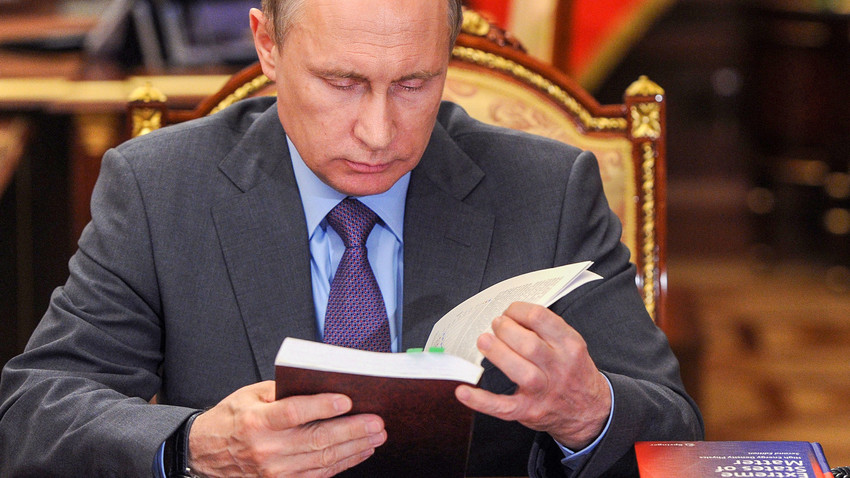 Vladimir Putin during a meeting with the head of the Russian Academy of Sciences, 2016

Putin's personal library contains a wide variety of books: from the novels of Fyodor Dostoevsky and Vladimir Nabokov to Ethnogenesis and the Biosphere of Earth by Lev Gumilyov and the Chinese Book of Changes. The president is a great admirer of Russian poets, from Alexander Pushkin to Sergei Yesenin. In addition, as someone who knows German, Putin also has a high regard for the poetry of Heinrich Heine and Wolfgang Goethe. The president also claims he hasn't read a single book about himself because he "knows everything" anyway.

Here are the books which the president has talked about most often and most memorably.

During his "Direct Line with Vladimir Putin" annual phone-in news conference in June 2021, the president said the epic novel about the 1812 war against Napoleonic France was among the works of literature that has influenced him the most.

This is a story about a piece of dough that comes to life. It trusted everyone it met and in the end was eaten by a cunning fox. This is yet another work of literature whose main idea left an impression on the president. Putin strongly advises anyone who holds a high office to reread the story. "As soon as you, esteemed colleagues, decide to take flattering speeches at face value and succumb to the appropriate conditioning under the influence of what you are told, you run the risk of being eaten," he said in the 2021 "Direct Line".

In 2016, at a meeting with Teacher of the Year award laureates, Putin confessed that he often had to read things he didn't like. But, he always keeps a volume of Mikhail Lermontov's poetry on his desk in order "to have something to think about, to take my mind off things and, generally speaking, to find myself in a different world - a worthwhile, beautiful and interesting one".

During one TV phone-in, Putin even analyzed Lermontov's poem Farewell, Unwashed Russia, reciting several lines from it. According to the president, Lermontov, an officer on active army service, was an extremely brave man who was "prepared to give his life for the interests of his country and Motherland". 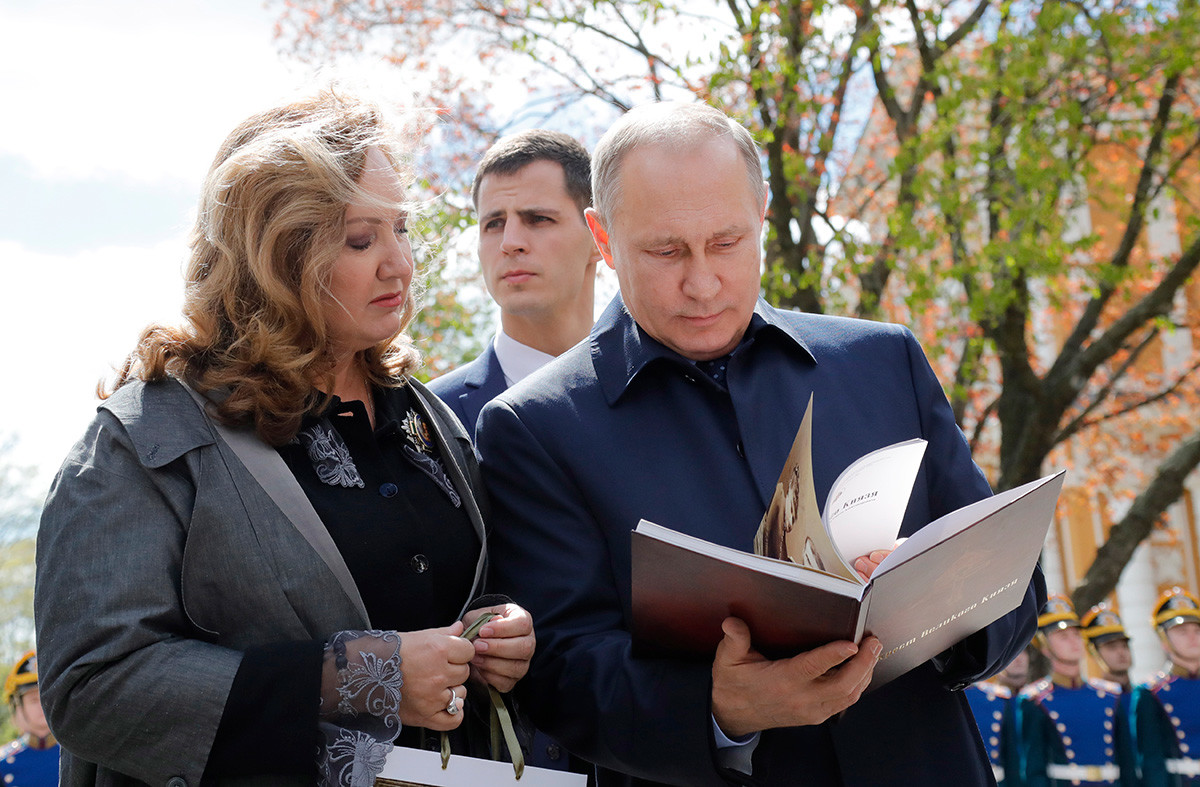 Vladimir Putin and Anna Gromova, Chairwoman of the Supervisory Board at the Yelisaveta and Sergiy Enlightenment Society, pictured at the Moscow Kremlin, 2017

At a news conference in December 2020 Putin spoke about the books he reads to his grandchildren. He mentioned many Russian and Soviet classics, saying that The Twelve Months by Samuil Marshak was one of his favourites. It is a rather instructive tale about a capricious young queen who offers a reward to anyone who brings her a basket of snowdrops on New Year's Eve.

Putin greatly enjoyed reading the story about the enigmatic boy, and in one interview he even confessed that he had learned it by heart. In his public speeches the president has mentioned The Little Prince on more than one occasion. He has also attended many theater performances based on the novella. In his opinion, the tale teaches us that "we are responsible for those who need our help".

Talking about environmental issues at the Valdai Discussion Club in 2020, Putin urged people to follow the example of the Little Prince. "It's a question of discipline. When you've finished washing and dressing each morning you must tend your planet. <...> It's very tedious work, but very easy," the president said, quoting a passage from the book.

The author of The Three Musketeers is another of Putin's favorite writers. In an interview with the French weekly Paris Match in 2000, he admitted to once being completely wrapped up in Dumas. "When I had finished reading all his novels I felt a kind of void, I felt drained. I was at a loss to know what to take up next because nothing seemed interesting to me after reading those books," Putin said.

The interviewer mentioned that Dumas had visited Russia several times and that he had said the following about the country: "There is a president or a tsar sitting in the Kremlin. What does he see from his window? Nothing." And Putin retorted that Dumas was absolutely right. He added: "The biggest scourge - personally and professionally - of holding high government office is the high degree of isolation."

In 2011, Putin gave a long interview to the American magazine Outdoor Life about hunting and fishing, in which he said that in his youth he had enjoyed reading the novels of Jack London, Jules Verne and Ernest Hemingway. "The characters depicted in their books, who are brave and resourceful people embarking on exciting adventures, definitely shaped my inner self and nourished my love for the outdoors."

Putin also named A Farewell to Arms, For Whom the Bell Tolls and The Old Man and the Sea among his favorite Hemingway novels. 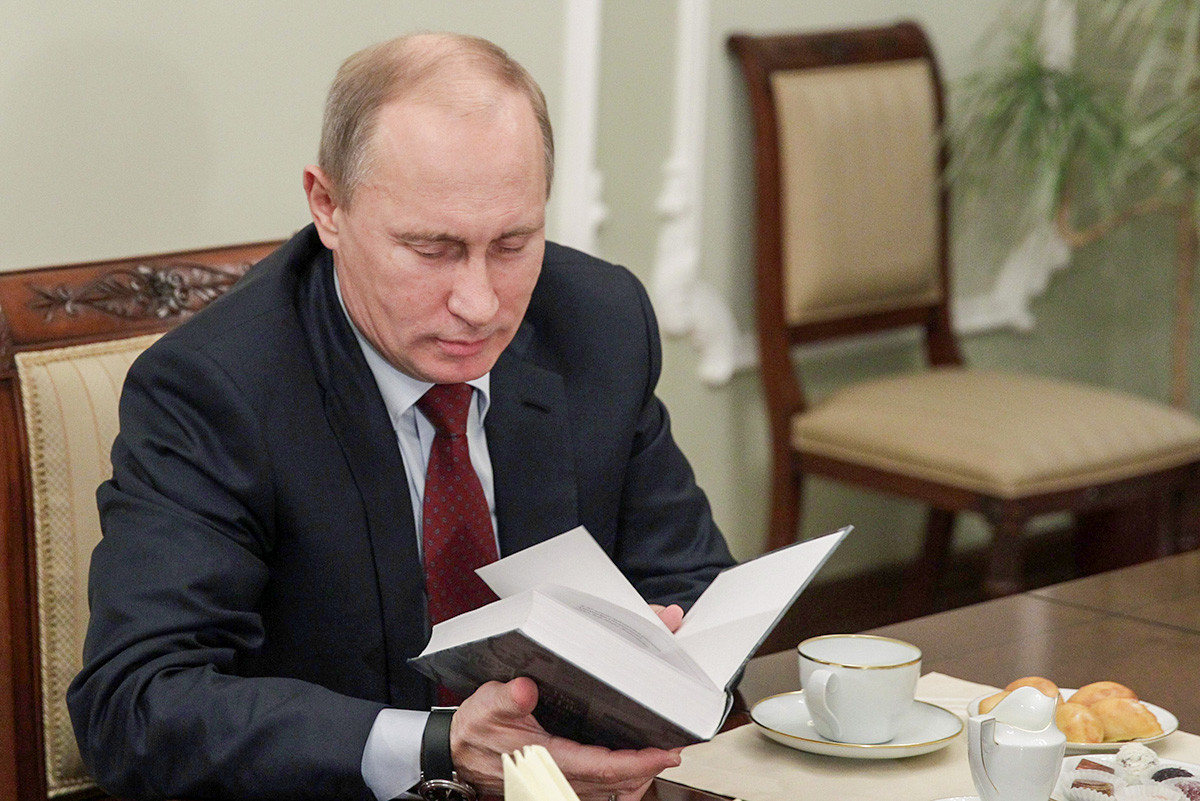 Vladimir Putin pictured during a meeting with Natalya Solzhenitsyna, president of Alexander Solzhenitsyn foundation, member of the board of trustees of Read Russia prize, 2012

In his interview with Outdoor Life Putin recommended that everyone should read Ivan Turgenev, "one of the best Russian classic writers". In particular, he recommended A Sportsman’s Sketches, the favorite book of all Russian hunting fans, which "reflects in general the philosophy of hunting in Russia, where the mere process, the fact that you are close to nature and communicate with people, matters - not the outcome".

Read more: 5 reasons Turgenev is just as cool as Tolstoy

At a news conference in 2007, Vladimir Putin spoke about how he coped with bad moods. At the time, his dog Koni and the poetry of Omar Khayyam helped him to endure. The president said that his wife had given him a book by the Persian poet as a present and that "there are many interesting things there that can help in such cases".

Vladimir Putin says he respects this Russian "peasant poet" for his genuine love of his motherland. Talking to journalists in the run-up to the 2012 presidential election, Putin recited Yesenin's poem Hail, my native Russian land: "If the heavenly hosts do say ["cry out" in the original - Russia Beyond]: / "Give up Russia and live in paradise!" / I will reply: "I don't want paradise / Give me my homeland instead."