Kiev as the 'mother of Russian cities': Fact or fiction? 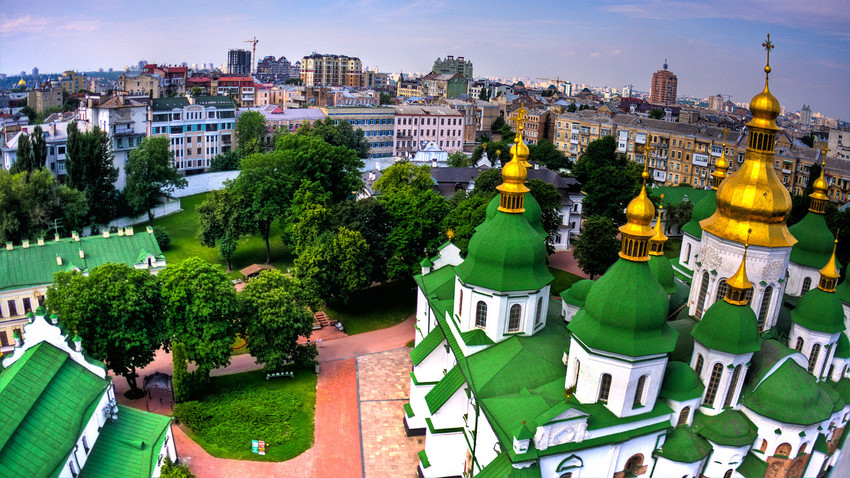 Getty Images
Ancient chronicles called Kiev the “mother of Russian cities” highlighting its pre-eminence over other population centers in ancient Rus’. In contemporary Ukraine, however, the adjective “Russian” is not received well. The government in Kiev and radical elements of Ukrainian society try hard to distance themselves from anything “Russian”. Similar attempts are now being made in the field of history.

“And Oleg sat down, ruling, in Kiev, and Oleg said: ‘Let it be a mother of Russian cities’”. This is how the oldest chronicle, The Tale of Past Years, described how Prince Oleg, one of the first rulers of ancient Rus’, made the decision to designate Kiev as the capital city of the recently established state of Eastern Slavic tribes in the late 9th century.

Oleg came from the north, from Novgorod, where the Eastern Slavs’ statehood originated. Having captured Kiev, Oleg united the two population centers that formed what chroniclers would later call Rus’ (the term “Kievan Rus” was coined by historians only in the 19th century). The people who lived there were called Rus(s) (the same as what contemporary Russians are referred to as today). The word “Russkie” and derivatives of it were used for centuries to designate those living in the territory of former ancient Rus’ – meaning, not exclusively ethnic Russians. 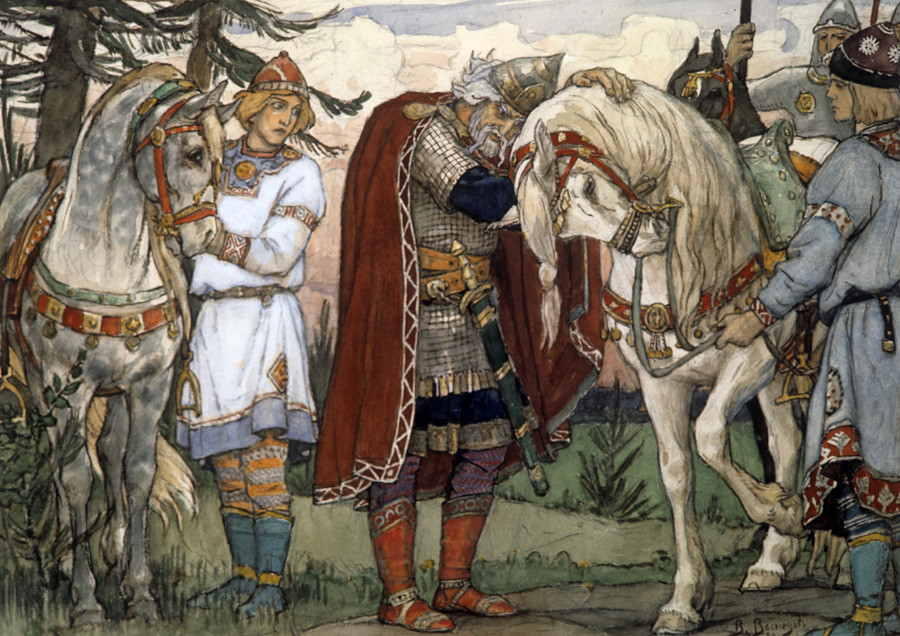 The illustration for Alexander Pushkin's poem 'The Song of the Wise Oleg' by Viktor Vasnetsov, 1899

Historians and those in charge of ideology in the Soviet Union were quite sensitive to the feelings of various ethnic groups. However, Rus’ and Russkie did seem to pose a problem, as the notions were not directly connected to modern Russians. The official historical account that was included in textbooks asserted that Kievan Rus’ was the first state of Eastern Slavs and the cradle of the so-called “ancient Russian ethnos”. Later, in the modern era, this old super-ethnos gave birth to contemporary Russians, and Byelorussians.

In Russia, this historical interpretation remains mainly intact. In neighboring Ukraine, however, the shared past with Russians and the prevalence of the word “Russian” in historical texts instead of the word “Ukrainian” seems to make many people feel uneasy. Hence, Kiev’s official historical narrative now claims that Kievan Rus’ was a proto-Ukrainian state due to the simple fact that contemporary Ukrainians occupy the core territory of the ancient country. Kievan Rus’ princes, thus, turn into Ukrainian ones and old Kiev, by tradition, becomes Ukrainian. Furthermore, ancient Rus’ itself becomes Ukraine. This is best exemplified in the coinage of a new term “Ukraine-Rus” which is supposed to demonstrate the direct connection between ancient Rus’ and modern Ukraine. 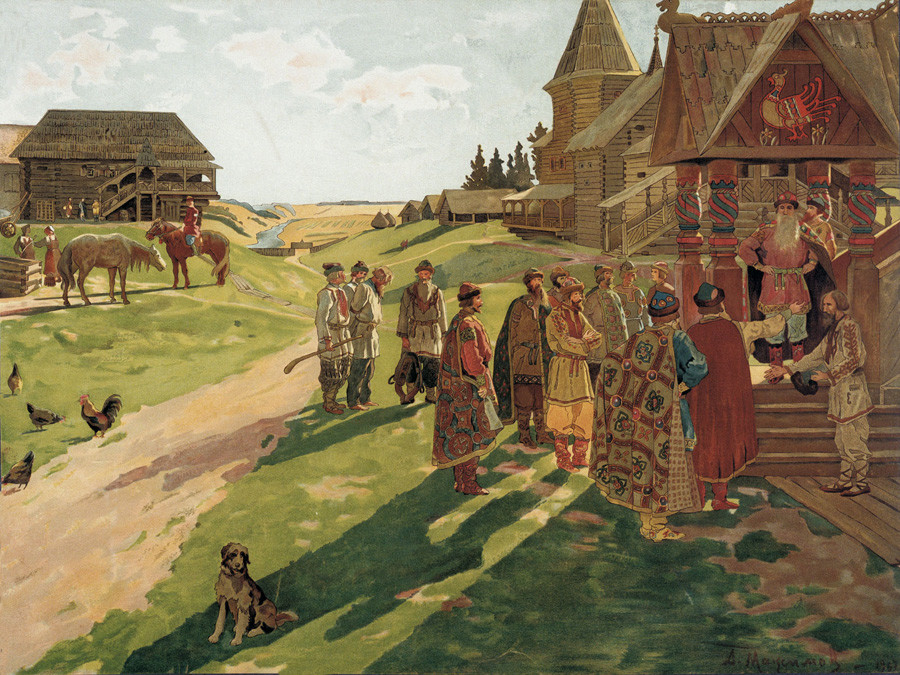 'A Medieval Princely Estate in Russia' by Aleksey Maksimov.

Some also argue in Ukraine that Russia has nothing to do with the history of Kievan Rus’. Russia is portrayed as some Northern country that originated around the middle of the 12th century. It reflects the fact that Kiev’s dominant position in Rus’ then declined, and the center of the state moved to the north: first, to the city of Vladimir, then to Moscow. These Northerners are portrayed as some separate (apart from the people of Kievan Rus’) breed of mainly Finno-Ugric origin, but also heavily influenced by Tatars who invaded the territory in the 13th century and conquered the ancestors of contemporary Russians. The influence that the Tatar invasion had Kiev and the surrounding territories that were razed to the ground and forced for many years to pay tribute to the invaders is usually ignored.

Russians are also blamed for stealing Kievan Rus’ heritage from Ukraine and presenting it as their own, robbing Ukraine of its national memory. One could argue that this approach is simply an attempt to appropriate Kievan Rus’ history and exclude Russia from the previously shared historical narrative. 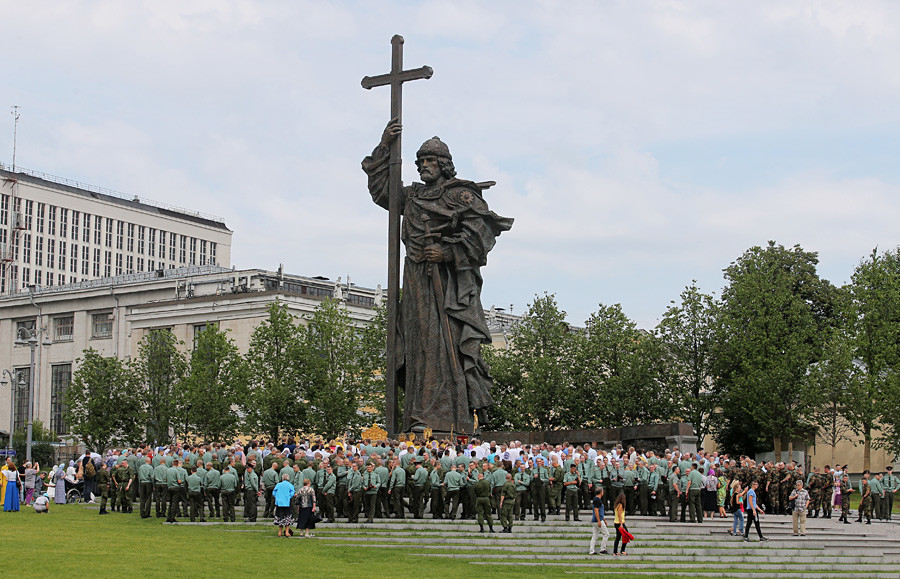 The participants of the cross procession marching toward the Holy Prince Vladimir monument on the Day of the Baptism of Russia.

As this version is considered a radical interpretation, it is no wonder that it has already caused a number of scandals. Last year, Ukrainian president Petr Poroshenko publicly expressed his outrage at the fact that a monument to “our” (i.e. Ukrainian) Prince Vladimir was erected in Moscow. Vladimir was canonized by the Russian Orthodox Church long ago for bringing Christianity to Rus’.

There was a similar uproar in Kiev when Putin called one princess from Kievan Rus’ “Russkaya” as she was, in fact, referred to at the time.

The narrative, that seems to ignore some historical facts widely accepted by most in the region who attended history classes at school, does not appeal to several respected historians in Ukraine. Such is the case with Petr Tolochko, the head of the Institute of Archeology, whose book release last year in Kiev was disrupted by nationalists. The book was about the origins of ancient Rus’. Tolochko supports the traditional interpretation on Kievan Rus’ as the common cradle of the three Slavic nations. Nationalists called Tolochko “anti-Ukrainian” and accused him of denying the very existence of Ukrainians. 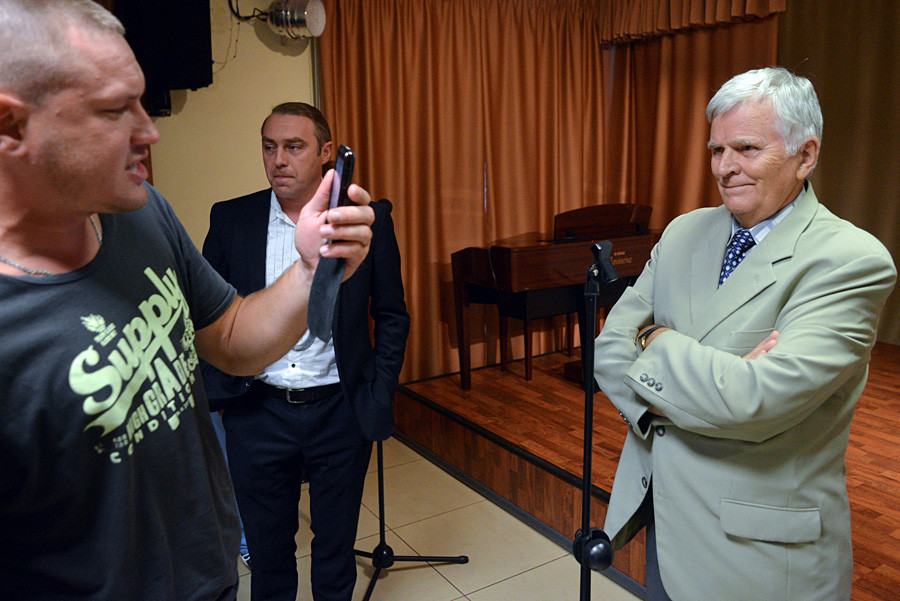 A group of radical Svoboda Party members disrupted the presentation of the book by the Ukrainian historian Petr Tolochko.

The nationalists apparently inferred this from the historian’s statements that it is impossible to look for a Ukrainian, in his/her contemporary ethnic and cultural guises, in the distant past. According to the academic, one cannot call Kievan Rus’ a Ukrainian state simply because the vast territory of Kievan Rus’ spread from Novgorod in the north to the Carpathian Mountains in the west and Volga-Oka region in the east. The majority of this land lies within the borders of modern Russia.

Tolochko highlights that it is fundamentally wrong to separate the history of the territory that later became the Principality of Moscow from Kievan Rus’. Both regions shared rulers from a common dynasty – the Rurik dynasty. They were close relatives. What is important is that the rulers of ancient Rus’ perceived themselves as closely connected and the idea of Rus’ unity was a leitmotiv in all ancient Russkie chronicles. Tolochko is worried about the tendency to mythologize Ukrainian history, the effects of which are already reflected in general school and university textbooks.

This article is part of RB’s series “Myths of Russian History”.