Getting (no) satisfaction: How noblemen used to duel in the Russian Empire 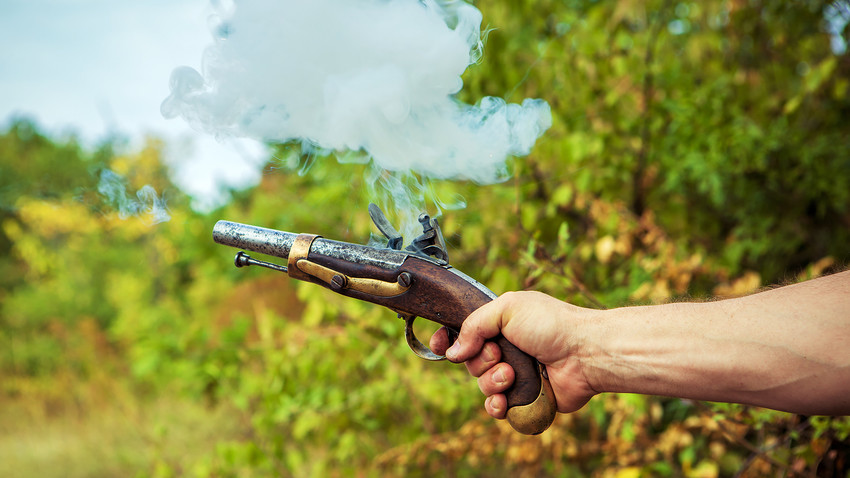 Back in the Russian Empire, dueling was the most elegant and noble way to shoot someone

Legion Media
Aristocrats in imperial Russia were ready to fight a duel for virtually any reason. Russia Beyond presents a brief overview of the “combat of honor” in Russia.

Peter the Great who ruled Russia in the early 18th century, when the dueling tradition came to his country from Europe, wasn’t particularly happy about it. “Hang them [those who participated in duels], whether they’re dead or alive”, the emperor ordered in 1715. Strict measures, however, didn’t work.

In fact, there is no registered case of such punishment being applied in real life throughout Peter’s rule – duels were not that popular in his time. It was the late 18th to the early 19th century when dueling became widespread among Russian noblemen. Why?

In the early 19th century Russia was fighting Napoleonic wars and finally defeated the French emperor in 1812. Aristocrats, who served their country as officers on the battlefield wanted to show their bravery in the peacetime as well.

At the same time, as Alexander Vostrikov, the author of The History of Russian Dueling, puts it, facing each other on a dueling ground was a means for the aristocracy to mark their uniqueness. A bourgeois man, or, God forbid, a peasant could never challenge a nobleman – having to defend was a privilege. 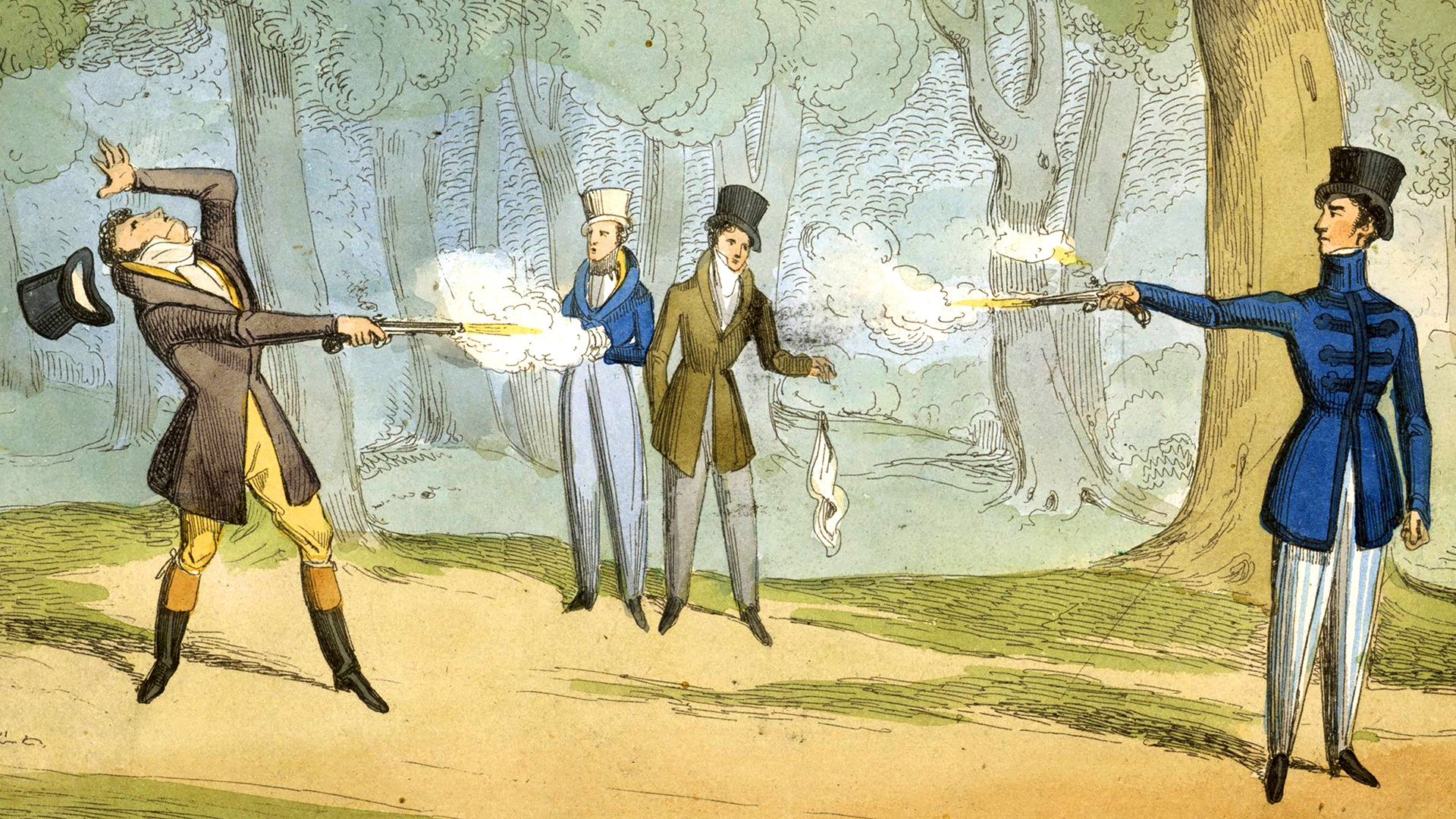 Only noblemen could participate in a duel, accompanied by at least two seconds.

But it was also a must. If someone hurt your honor and you didn't challenge his life, you were no longer welcome in noble society. In the 19th century that was probably worse than death, at least for aristocrats. It didn’t matter that dueling remained prohibited – young (and not so young) noblemen were ready to solve their issues with pistols or swords.

Causes for a duel

Reasons for fighting could be different. Of course, many cases were connected with a woman – a husband challenges a person who is rumored to have an affair with his wife (that’s how the most precious Russian poet Alexander Pushkin met his death in a duel with Georges-Charles d'Anthès) or two young men in love with the same girl challenge one another. But it’s far more than that.

By the way, Pushkin’s biography could be presented as a list Any Possible Reason to Start a Duel. The poet was some kind of a  – a person who challenges every man even seeming to be disrespectful.

The duel with d'Anthès was at least the 21st in his “career”, though most of them (15) ended without shooting and he never killed anyone. Usually, his friends helped to resolve the issue through pre-duel negotiations, and Pushkin or (more often) his opponents would apologize. Nevertheless, the poet was always ready to fight.

The reasons for his duels ranged from drunken conflicts, bad jokes, to literary disputes. And they were common. As Alexander Vostrikov wrote: “Two horse carriages can’t find a place in the same street – a duel. One man accidentally pushes another – a duel. Someone gives you an impolite look – a duel”. Many aristocrats behaved like bombs ready to explode.

The rules for dueling were well known. First, one man insults another, thus provoking a challenge. Insults could be different – from a verbal affront (calling your opponent “scoundrel” or something of that kind) – to a slap.

The offended party says, without directly mentioning a duel – they are forbidden, remember – something like “We can’t leave it this way”, after that the opponents diverge. According to unwritten rules, they can’t see each other before the duel.

Each of them chooses a second – a confidant who will represent him. Seconds meet each other with one officially demanding satisfaction from the insulter. Their aim is to settle the case peacefully. But if they fail, they agree a time and place, usually some remote scene at dawn And so the scene is set for the duel. 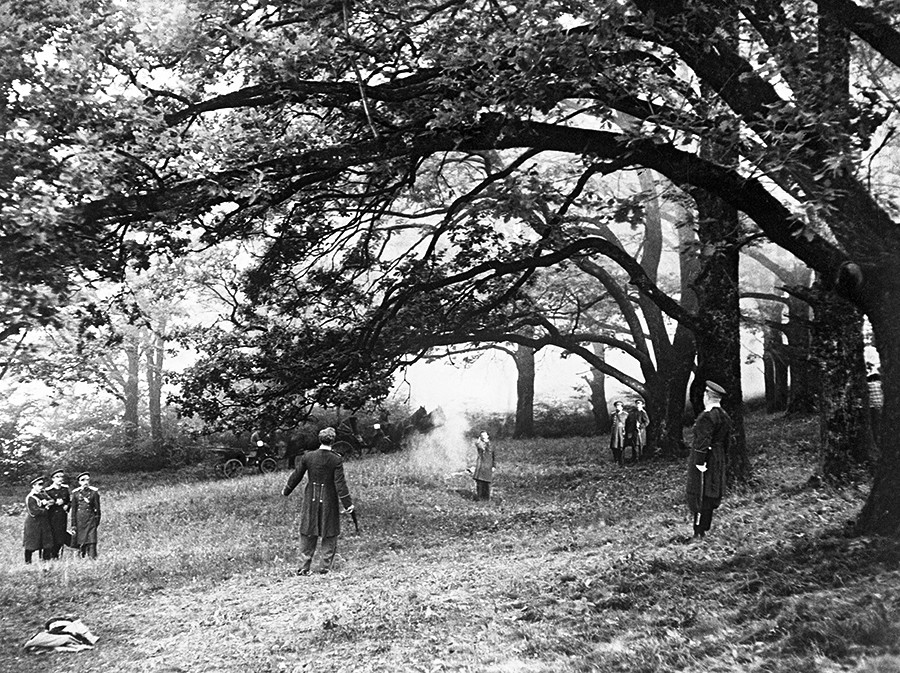 A still from the feature film "The Duel" based on the eponymous short novel by A. Kuprin. Mosfilm Studios, 1957.

under which duels were fought could also differ. Usually, Russian duelists preferred pistols, not swords, for a good swordsman had an advantage and in shooting ( pistols were hard to aim) chances were evener. Apart from that, sword duels traditionally ended with the first blood, while shooting more often lead to someone’s death.

The standard distance between shooters in Russia was closer than in Europe, where there had to be at least 15 steps between them. Russians could shoot from three paces when the two men were holding ends of the same neck scars (it was called a scarf duel). In this one of the men would definitely end up dead. Yes, Russia was pretty brutal back then!

The more standard way was to have barriers between opponents (placed 10 paces apart). They stood about 10 steps from each barrier and converged on command. Both had a choice: come to the barrier and shoot or stay and take aim from afar. That’s how Pushkin died – d'Anthès shot first.

The death of dueling

Pushkin died in a duel, as well as another famous Russian poet, Mikhail Lermontov, in the era of Nicholas I (ruled 1825 – 1856). That emperor hated duels, calling them “barbarism, nothing to do with nobility”. During his age, convicted duelists faced prison sentences of between six and 10 years. It was after his rule that the number of duels began to decline.

Gradually, dueling lost its quasi-sacred meaning as people who were not of noble origin began taking part in it. Yet another Russian writer, Anton Chekhov, in his novel Duel (1891) portrayed two people who were to fight in a duel “because it’s expected” but had no idea how to do it. Dueling as a custom had all but disappeared by the beginning of the 20th century and was unheard of after 1917, as was the Russian aristocracy – which also disappeared after the Bolshevik Revolution.