Why were the hussars considered Imperial Russia's craziest troops? 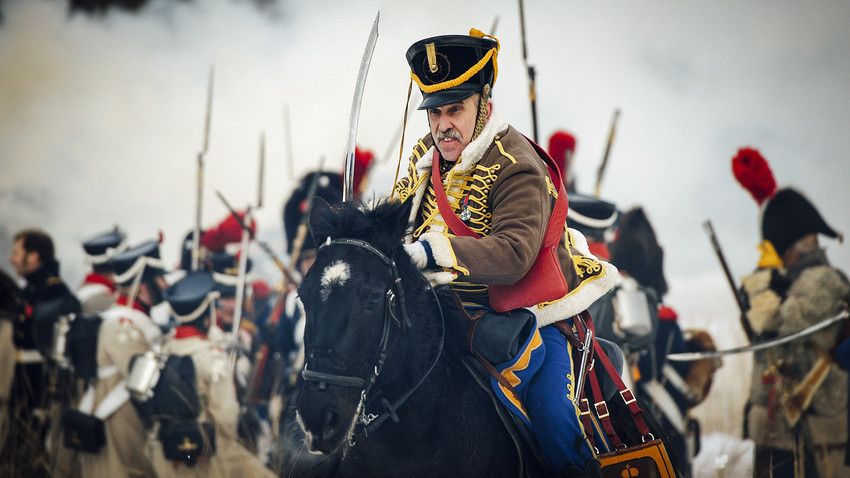 Maksim Blinov/Sputnik
Just like in Europe, the hussars in Russia had a reputation as the most daring in the entire military. We found that their daily habits, ranging from drinking to fighting, owed much to their professional functions.

Comte de Lassale, the famous “Hussar General” of the French army said, “Any hussar who is not dead by the age of 30 is a blackguard,” and this description was spot on for Russian hussars. Brave to the point of insanity, they were often the ones who ignited the battle; they were first in counter-attacks and quick onslaughts. Armed and protected lightly, they suffered serious casualties. That is why during times of peace hussars played hard, cherished their honor and were always ready to fight to the death. As Russian military commanders put it, hussars and royal guards were the type of military men who needed the swashbuckling way of life to uphold their spirit.

Drinking to become a hussar 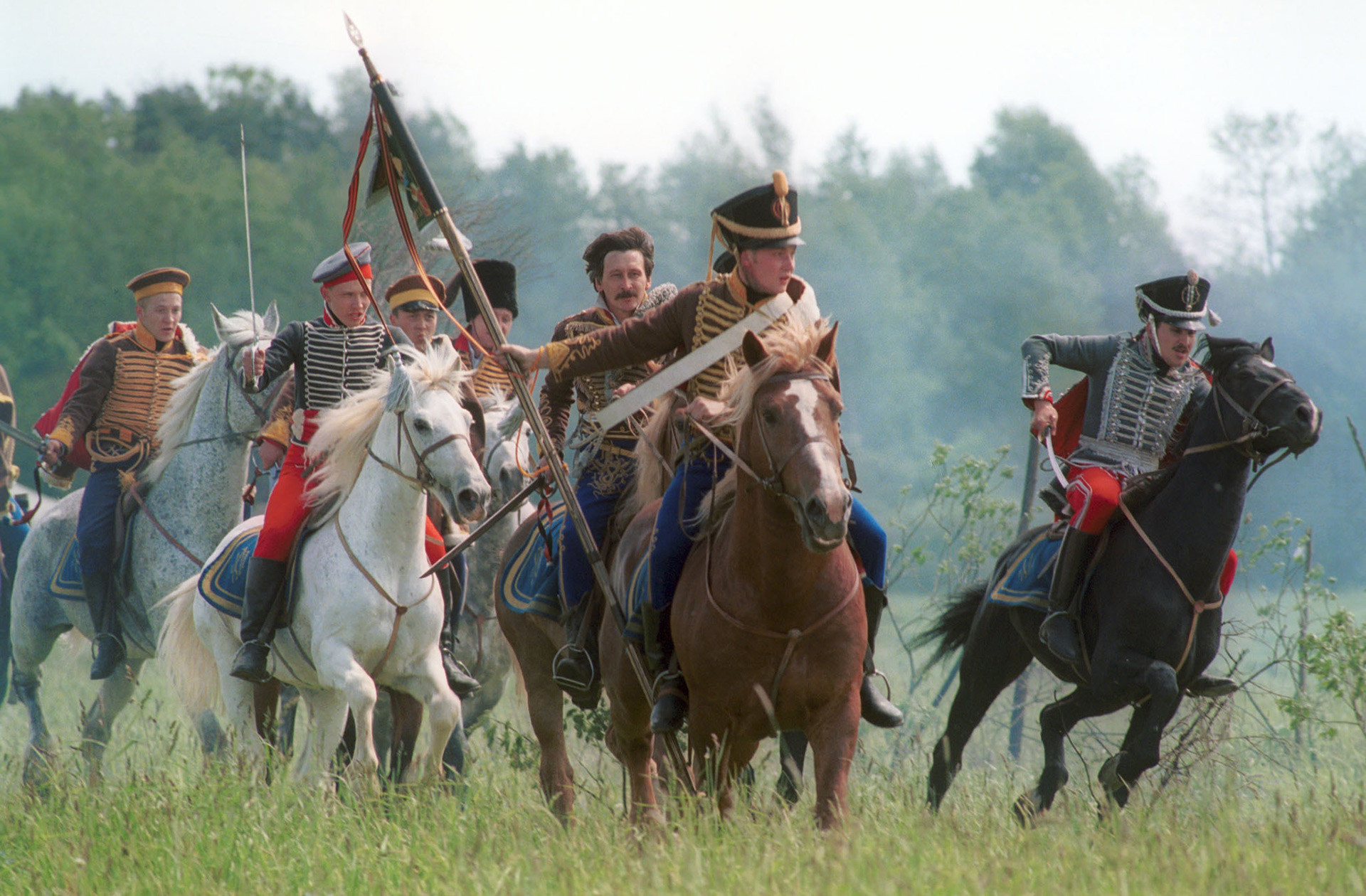 The first Russian hussar regiments appeared during the time of Peter the Great and did not last long. The genuine development of hussars in the Russian army came in the second half of the 18th century. The Ukrainian Cossack army was reformed by Catherine the Great, becoming new five hussar regiments, as well as one regiment of royal guard hussars. They consisted in large part of Cossacks, used their system of command and were inspired by their dashing traditions.

One could become a hussar just by chance, being duly drafted in the army; or any young healthy male could join the regiments. To do this, one had to go to cities like Minsk or Mogilev (currently - Belarus), where at certain times, improvised drafts took place.

These looked like drunken brawls - jolly hussar soldiers commanded by sub-officers barreled down the streets, pouring wine to young guys who happened to be around. Wine was paid for from the regiment’s funds - about eight rubles per person, an imposing sum in those days when 16 kilos of bread cost just one ruble. Guys swarmed to get a free drink, and almost every day the hussars took a lot of totally juiced towners with them back to the regiment barracks.

Hussars were light cavalry, armed with sabres, carbines and pistols. They sported bright detailed uniforms, a different set for each regiment, and which were inspired by uniforms of the early Hungarian hussars. The main feature of the hussars was the speed and abruptness of their attacks. This required bravery and even recklessness. Obviously, a hussar had to be physically fit, which was achieved by relentless drills.

Grinding from dawn till dusk 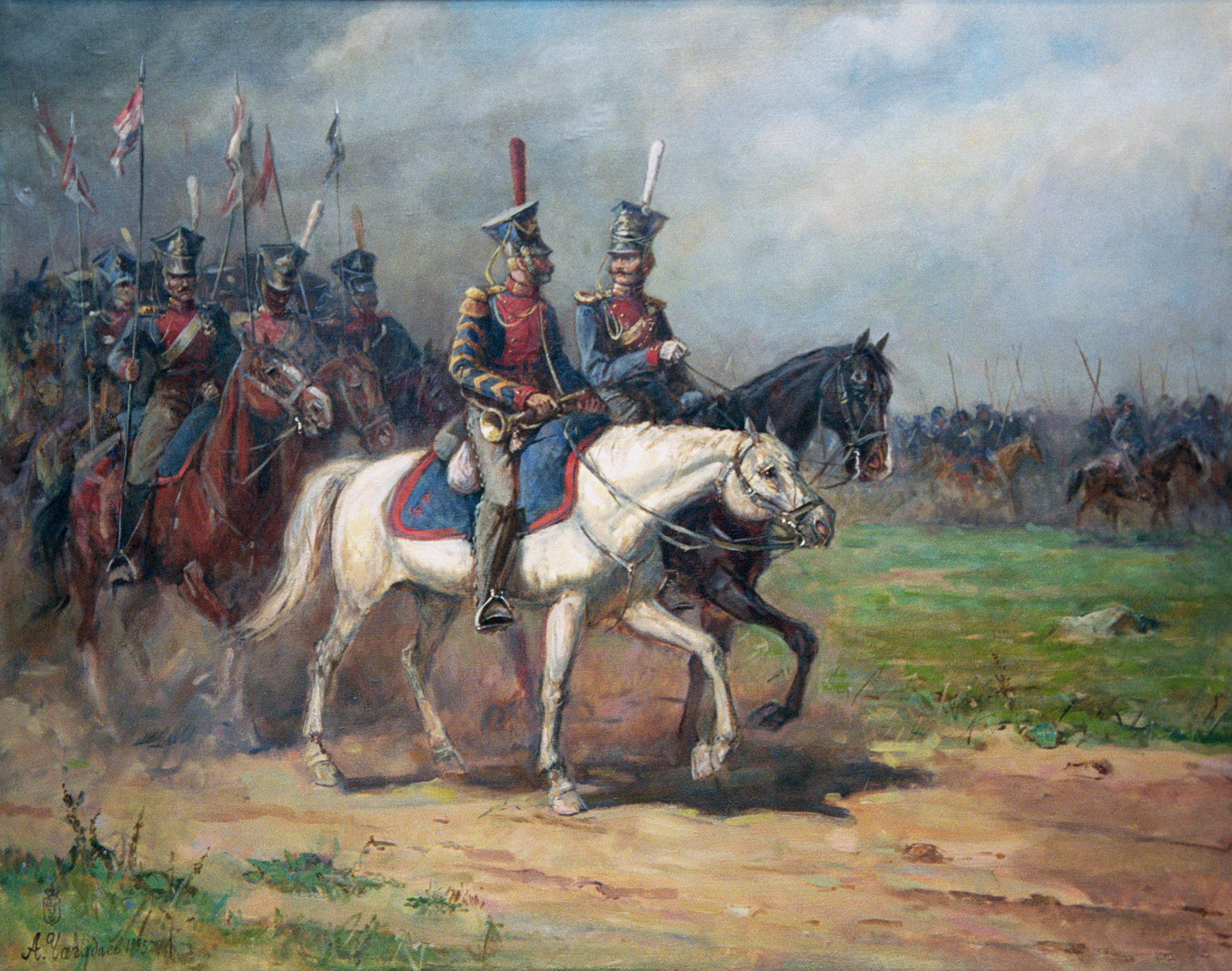 Loading a hand pistol is a meticulous task, but it becomes harder when one does it at dusk, during pouring rain, mounted in a saddle on a moving horse. Hussars were taught to do this, and they were severely punished (200 hits on the back with an iron rod, for instance) if they were slow in loading, or if a gun fired a blank shot. This is just an example of the severity of hussar service.

They got up at 5 a.m. to clean and feed first their horses, and only then themselves. The day was devoted to drills and training in horse riding, which ended at 6 p.m. The time was told by the trumpeters - compulsory for every hussar regiment. They were called “the aristocracy of the hussars”. During combat, they were in the heat of battle, giving signals to change formations, attack or retreat; in total, there were over 50 trumpet signals. These were especially hard to perform during gallop, but hussar trumpeters could do this.

First of all, the drink: "It looked very soldierly: floor is covered with carpets, in the center is a pot, sugar is burning soaked in rum; around, in rows, the feasters are seated, holding pistols in their hands… When the sugar has melted, the champagne is added, and the ready zzhenka (a drink made of rum, champagne and melted sugar) is poured into the pistols - that’s how the bender starts...” Count Osten-Sacken wrote.

Drinking alone was considered “totally lewd behavior,” even by hussars. Among the favorite drinks were champagne, rum, punch, and mint vodka. It was comme il faut to drink a beverage of your choice for a month or two, and then switch to something else.

Then, the escapades: "Drunk, we rode to Krestovsky Island in St. Petersburg. It was a winter holiday, and a lot of Germans were there riding down the hills. We split in two groups and were watching the crowd. As soon as a German guy or girl sat on a sleigh, we kicked it from underneath them, which made them roll down the hill on their butts… Balashov, the governor general of St. Petersburg, later called on me and conveyed a reprimand from the Tsar himself...” wrote Sergey Volkonsky, one of the future Decembrists. Alas! If such reprimands only could stop the hussars! 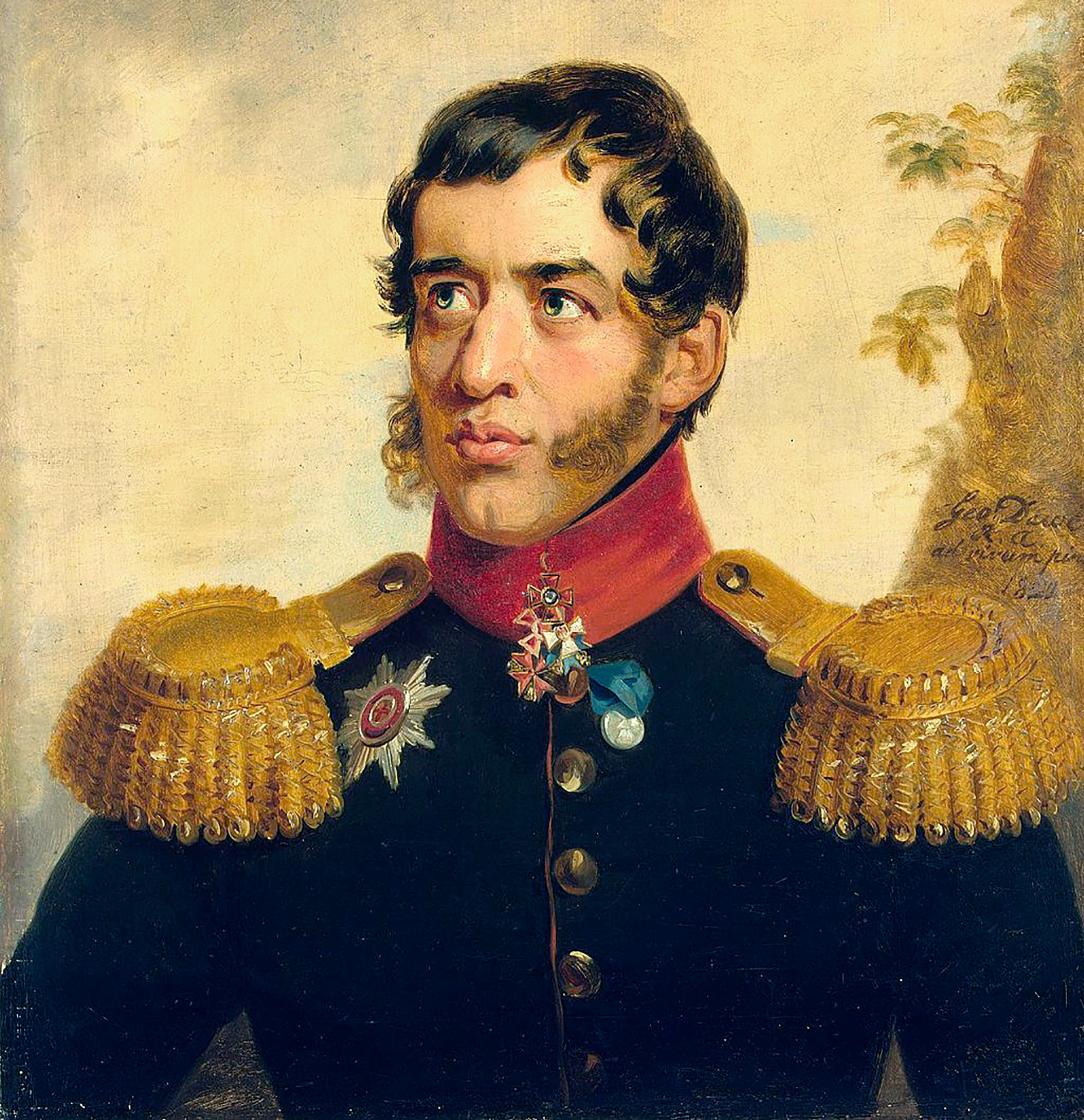 “We hated French ambassador de Caulaincourt (it was during the Napoleonic wars)... Many of us stopped visiting the houses he frequented. Among our outbursts of anger, one went like this. We knew that in Caulaincourt’s living room Napoleon’s bust was standing above a kind of throne chair, and no other furniture was there - we considered this an insult to Russia. One winter night, some of us rode in a sleigh past his house on the embankment and threw heavy stones at this room, breaking its windows. The next day - complaints, investigations, but to this day, no one knows who was in the sleigh,” Volkonsky recalled.

Hussar officers frequented balls, and sometimes hosted them, but this was only available to the noblest and wealthiest. During a ball, hundreds of wax candles were lit. Balls were expensive - not even taking into account the considerable sums spent on food and drink.

"He gave three balls a year and eventually squandered <his fortune>,” Pushkin wrote in Eugene Onegin. "We got a jocular order… to torture the German girls with dances. With fervor, we fulfilled this order - we danced until we began to drop. The pretty German gals were delighted! After the lavish dinner, at three in the morning, after a mighty libation in the names of ancient gods Bacchus and Aphrodite, the mazurka started, which ended only at 7 in the morning… We ordered our soldiers to take away the guests’ warm clothes from their servants, and sent their carriages home - so almost all the guests had to stay until dawn...” Faddey Bulgarin recalled.

A great many Germans in Russia can be explained by the fact that during the Napoleonic wars many Germans fled to Russia, seeking refuge. In a nation governed by ethnically German rulers, they felt safe.

To tell the truth, the hussars just loved to get carried away. Young men full of energy grabbed every opportunity to spend their time usefully. Hussar Sergey Marin wrote to his friend that his battalion changed hobbies like gloves: in winter everybody played chess; in spring, billiards; then in summer - making fountains and cascades; and in autumn, everybody went hunting.

(Not) joking with death 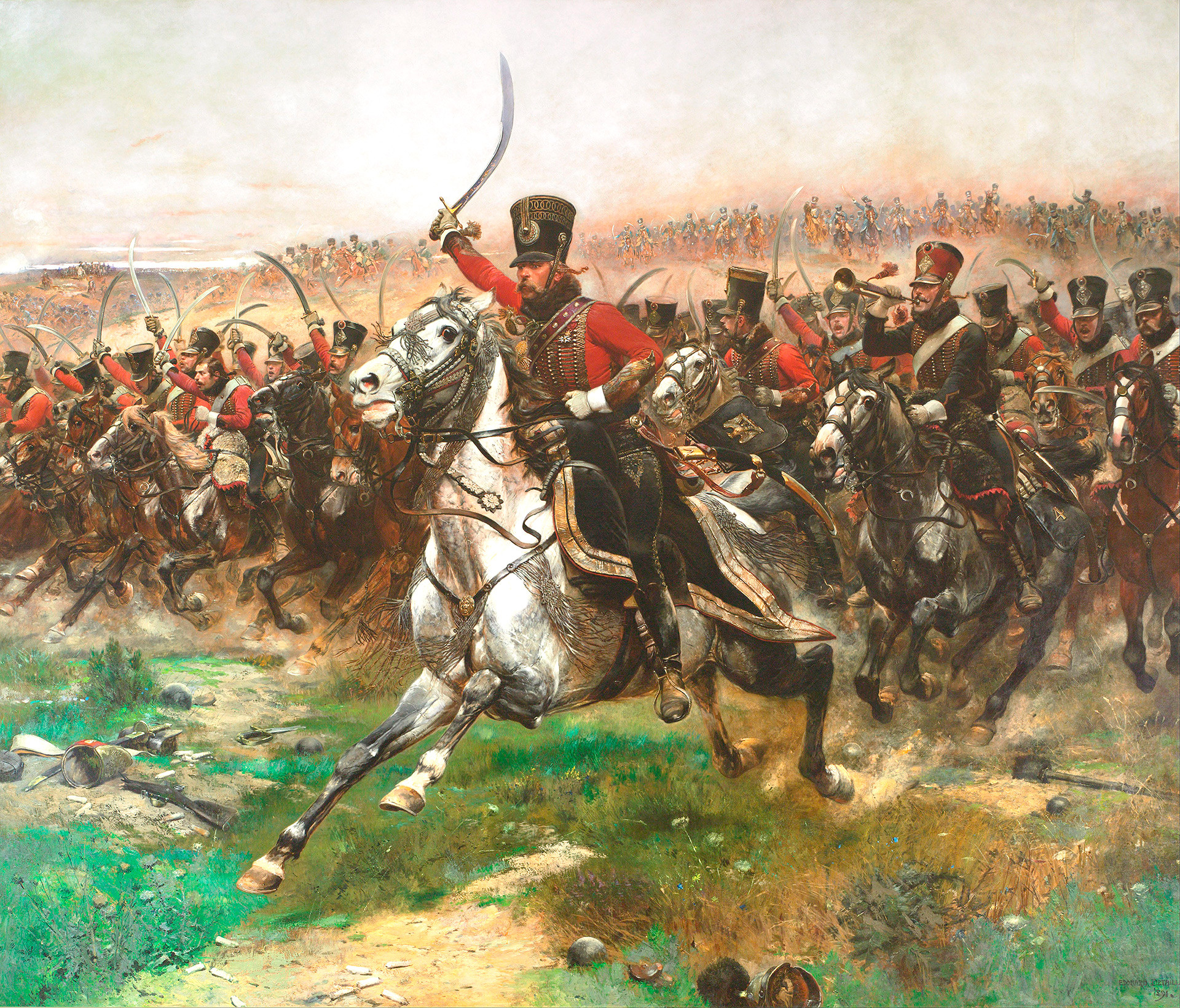 Military ethics in the 19th century called for treating death as a usual part of life, and if necessary it should be accepted placidly. “When a bullet whistles, don’t you wink. When in battle, hack boldly. When attacking, don’t hold your horse, entrust your soul to God, and if there is a need, die,” so went a jolly hussar song, explaining a hussar’s attitude towards death.

During peaceful times, hussars didn’t hesitate to show their bravery - this quality was considered foremost for a soldier, and a hussar in particular. So there were duels. Lots of them. Duels on and about everything.

One hussar cornet had a nickname, “Buyanov” (“Brawlerson”), and this was for a reason. His first duel was in Moscow when an officer of the royal guard said that Buyanov’s regiment is lame. Buyanov wounded the guard officer lightly, was demoted and sent to the Caucasus.

After three years, he again acquired the rank of cornet and returned to his regiment. In a year, he challenged a provincial governor to a duel for insulting the wife of Buyanov’s fellow officer. He was demoted once again to a regular soldier, and returned to his regiment in four years, only to have a duel with a fellow officer. After the third demotion, Buyanov’s fate was lost.

Hussar officers’ attitude toward death was quite extreme. They were ready to defend their honor even without pistols. In 1807, the Grodno hussar regiment was in Prussia, fighting against Napoleon alongside the Prussian army. During a card game at an inn, a Prussian officer offended Russian hussar Lt. General Count Podgorichani.

The Prussian was a good shooter and chose pistols as the weapon. The Count replied that he didn't have pistols, but that he'd bet his life on a card toss: whoever wins the toss kills the opponent. They started playing, and the Count won. All the officers followed the duelists to the garden; the Prussian officer thought that the Count’s decision was a joke, but Podgorichani took a rifle from the innkeeper and bluntly killed the Prussian, saying “I don’t joke with death. Had I lost the toss, I would stand in his place and I’d make him kill me.”

For more gripping stories from Russia’s 19th century, read about Leo Tolstoy’s infamous uncle or dive into tales of 3 foreign charlatans in Russia. Alternatively, you can check out the Russian leaders who abused alcohol.