How to behave with Russians: Tips from a 1944 American pocket guide 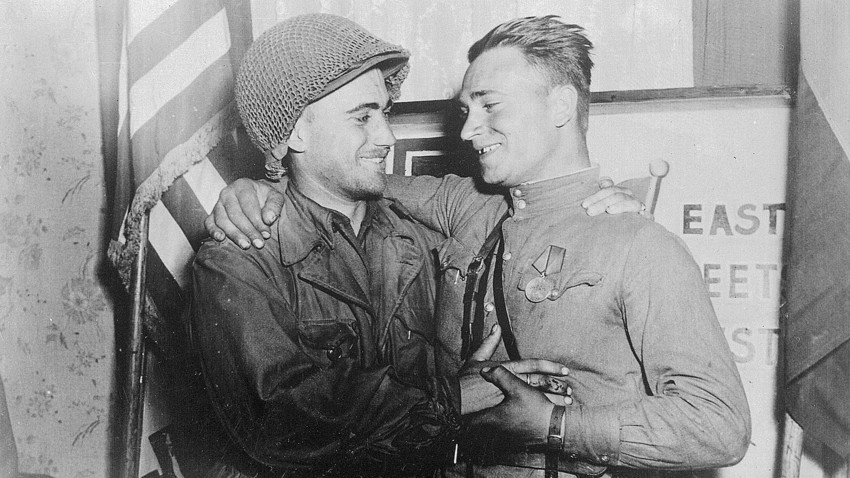 William E. Poulson/Wikipedia/Getty Images
Don't ever joke about Joseph Stalin. Also, never expect a woman to approach first, do not whistle indoors, and learn what a 'papirosa' is, for heaven's sake! In a strange and enigmatic country like the Soviet Union, a WWII-era American soldier really needed a guide to help him navigate the alien cultural terrain.

“For use by military personnel only” – reads the book’s introduction. In 1943-1944, nobody could predict how World War II would end. The U.S. military decided to teach its soldiers and officers how to deal with Russians. Due to 1930s propaganda, Americans still saw Russians as enemies even though the two nations were fighting together against Hitler. In the end, there were only a few real encounters between American and Russian troops (the most famous was April 25, 1945, when Soviet and American troops met at the Elbe River, near Torgau in Germany), so this manual is more valuable as a resource on how Americans perceived Russians. 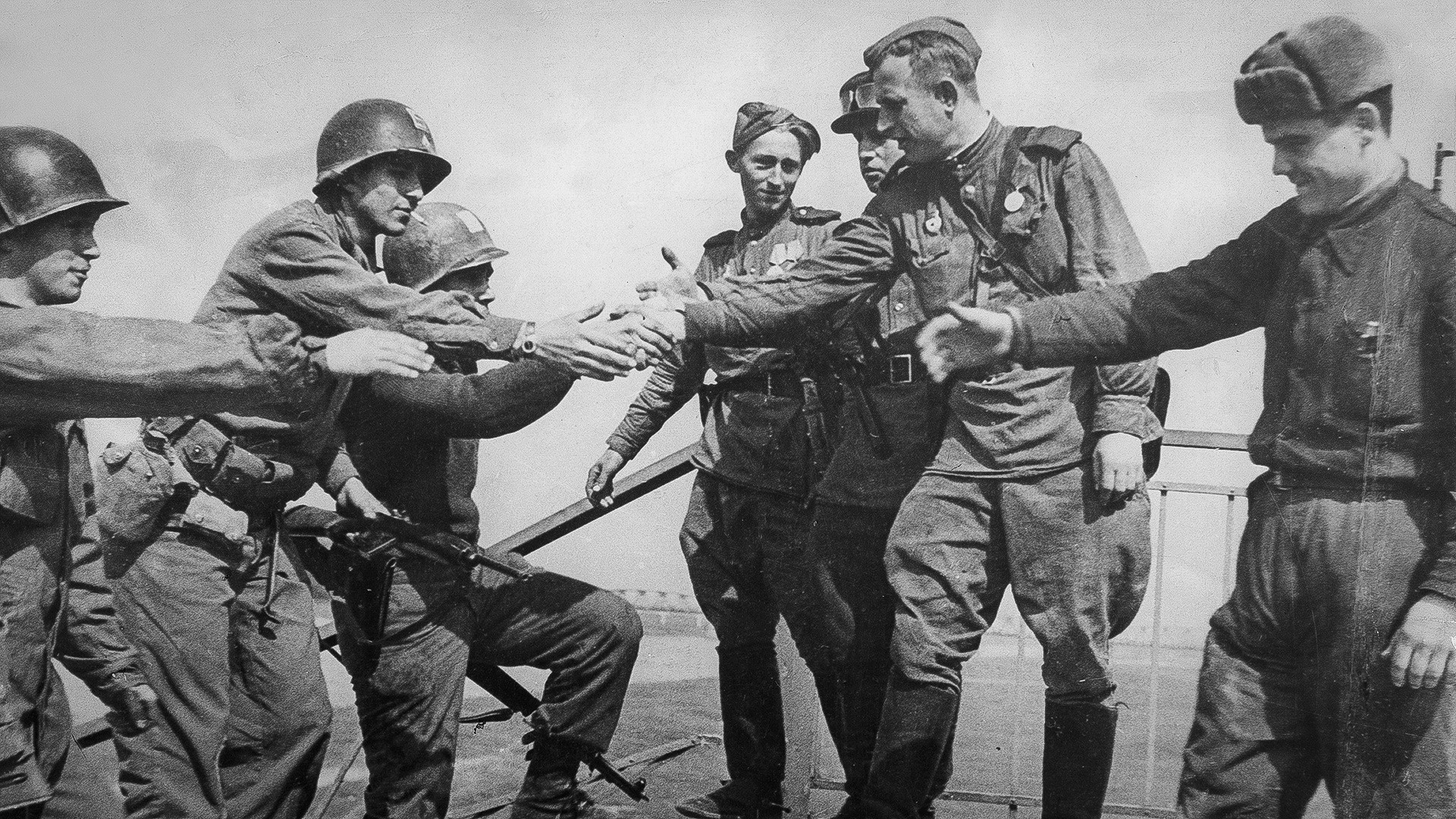 These recommendations, however, are not for an occupying army. Instead, they are meant for a friendly military contingent. This book presents a unique angle on how the U.S. military perceived the USSR and its people, and it’s interesting to compare them to what we know today.

In the very first lines, the book presents the scope of the problem: “On duty in the USSR, the largest country on the face of the earth, you may be stationed in a sub-tropical climate or within a stone’s throw of the Arctic circle… The people will vary as much as the climate.”

The authors noted that destruction and poverty in the USSR were caused by war: “Some of the people may appear poorly dressed, but they have been wearing these same clothes for nearly three years… Russians had to manage without silk stockings so that factories might be established which could produce more necessary things.”

Along the way, the authors don’t miss a chance to subtly praise the U.S. economy: “Rationing in Russia has had to be much more rigid and severe than in America: people receive no more than what is considered enough for the type of work they are doing.” Nevertheless, the book says, “you will find Russian people very proud of their country.” 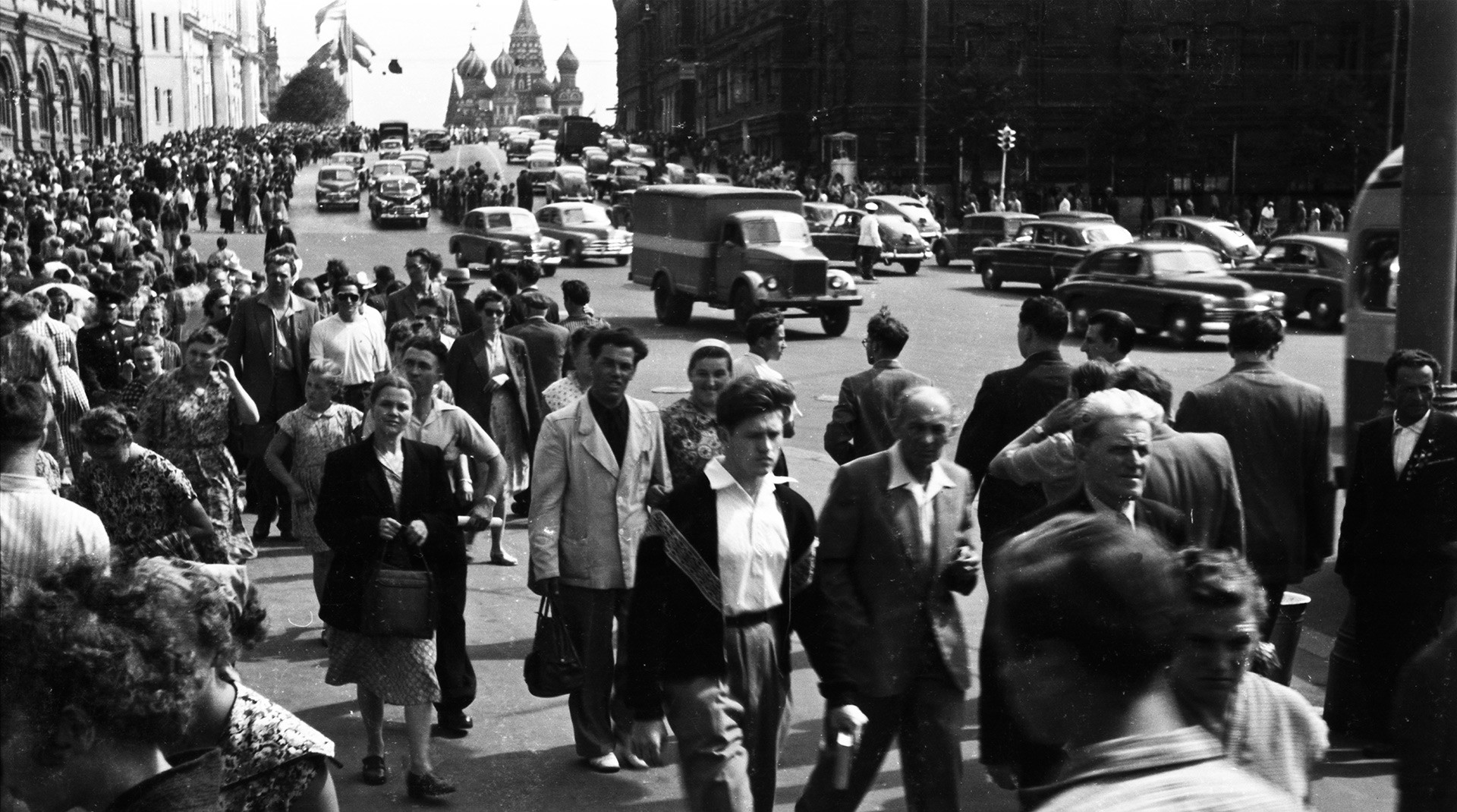 Russians, who are “friendly and congenial,” are the main topic of the book, and sections such as “Economy,” “Weights and measures,” and “Soviet Uniforms and Army Grades” are now only interesting to historians.

Some things about geography, however, are accurately noted according to military needs, for example: “For reasons unknown, but expressed by some as the curious “tilt of the earth,” the western banks of Russian rivers are considerably higher than the eastern banks. This fact presented difficult problems to the Red Army when it was driving the Germans westward out of the Ukraine.” 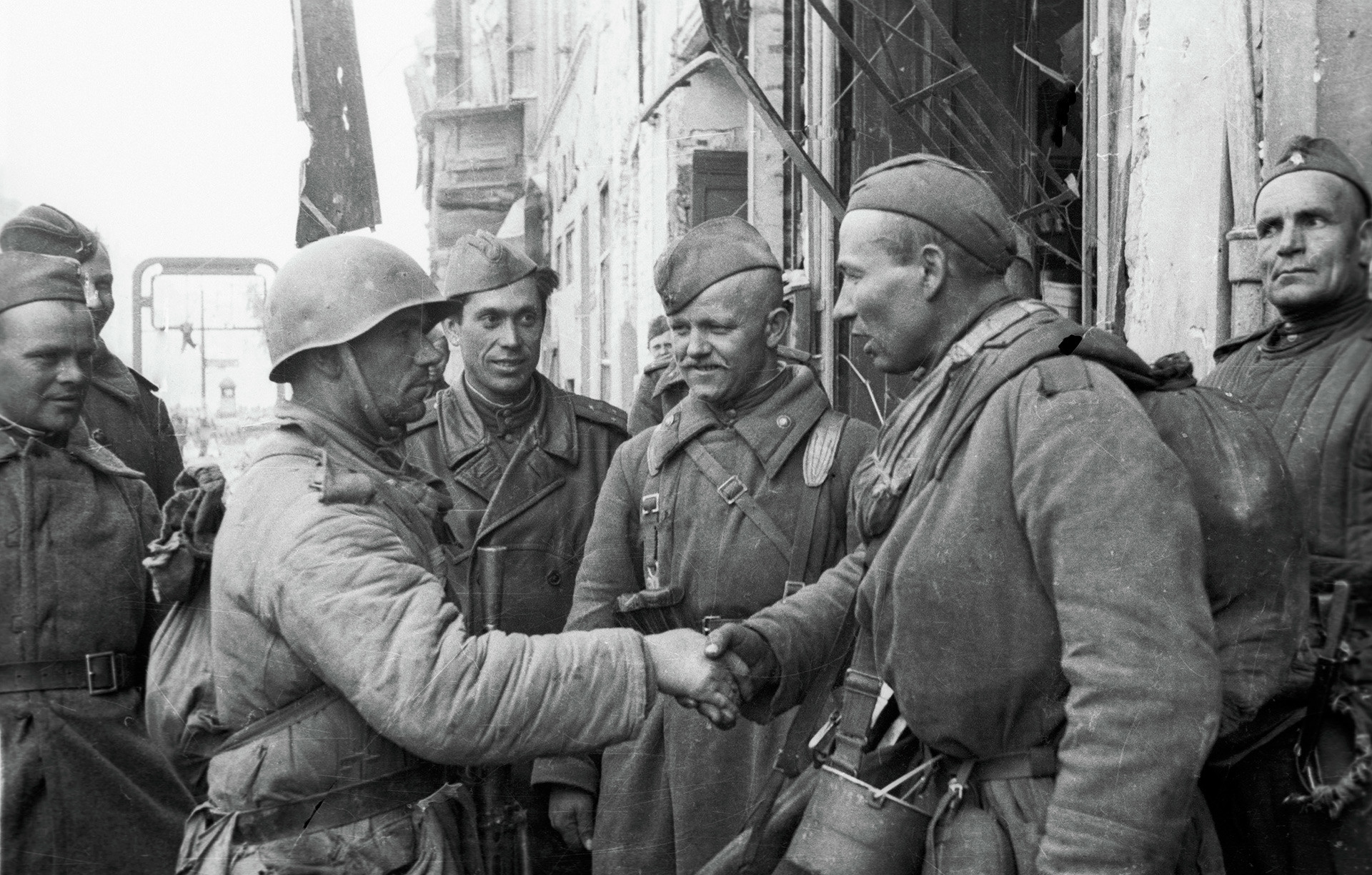 Some Russian customs described are already outdated: “Russian men may embrace and kiss upon meeting. Such customs are long-established. Don’t laugh or stare at their strangeness.” Russian men still embrace upon meeting – if they are good friends. But the famous triple Russian kisses are long gone, though sometimes they can be found in émigré communities.

“When you see a woman acquaintance, you speak first or otherwise she will not greet you (it is extremely impolite to whistle).” As far as whistling, yes, you can still get an annoyed look (at the very, very least), but with greetings, Russian women have long become more cosmopolitan.

Vodka is considered the “national drink of the Soviet Union,” and the manual says it’s usually “followed by a piece of black bread,” which is more realistic than the following that says Russian starters are usually “caviar and spiced meat.” In fact, these two were rarely seen by most Russians during the war. Another national drink is tea, and “a Russian will break a lump of sugar in his mouth, and drink his tea by filtering it through the sugar.” Yes, our babushkas did this, and it was possible because mid-20th century sugar was very thick, unlike today. 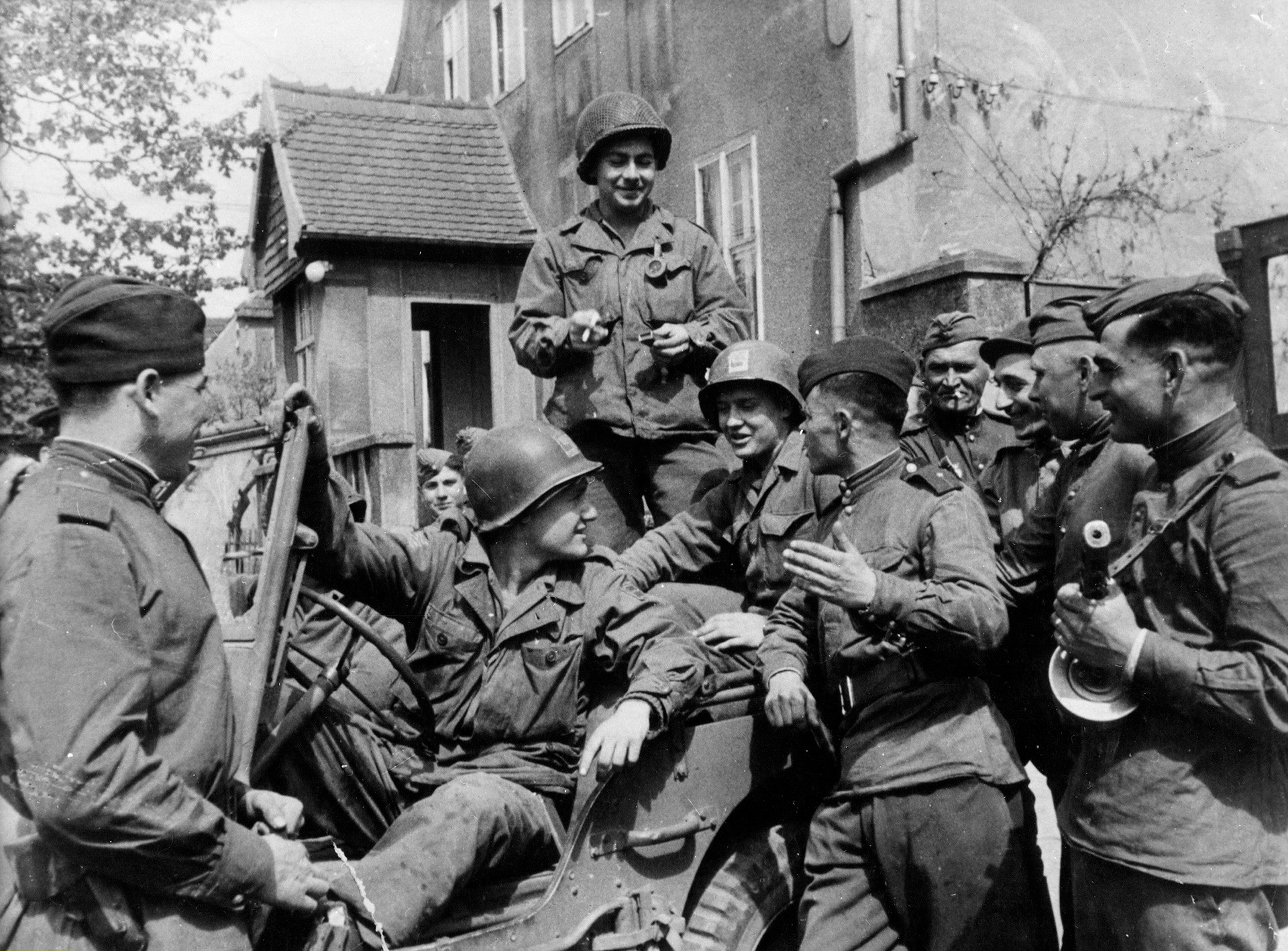 We also learn that in the 1940s cigarettes were scarce in the USSR, and most men smoked papirosy “pa-pee-raw-sih” (there is still no English word for this): “three to five inches in length, two-thirds being a hollow round cardboard tube, and one-third a paper extension of this tube filled with tobacco.” Yes, they still exist in Russia, but are smoked only by a small number of old-timers.

The book points out that even during the war Russians went to the cinema and theater because they are “artistic by nature;” but the only way “to know the Russians,” is to “read their literature.”

The authors also note the heroism of Russian entertainers: “Most of Russia’s top-notch singers, actors and dancers… have made tours through the army camps and bivouacs. Many entertainers have been killed on the front.” 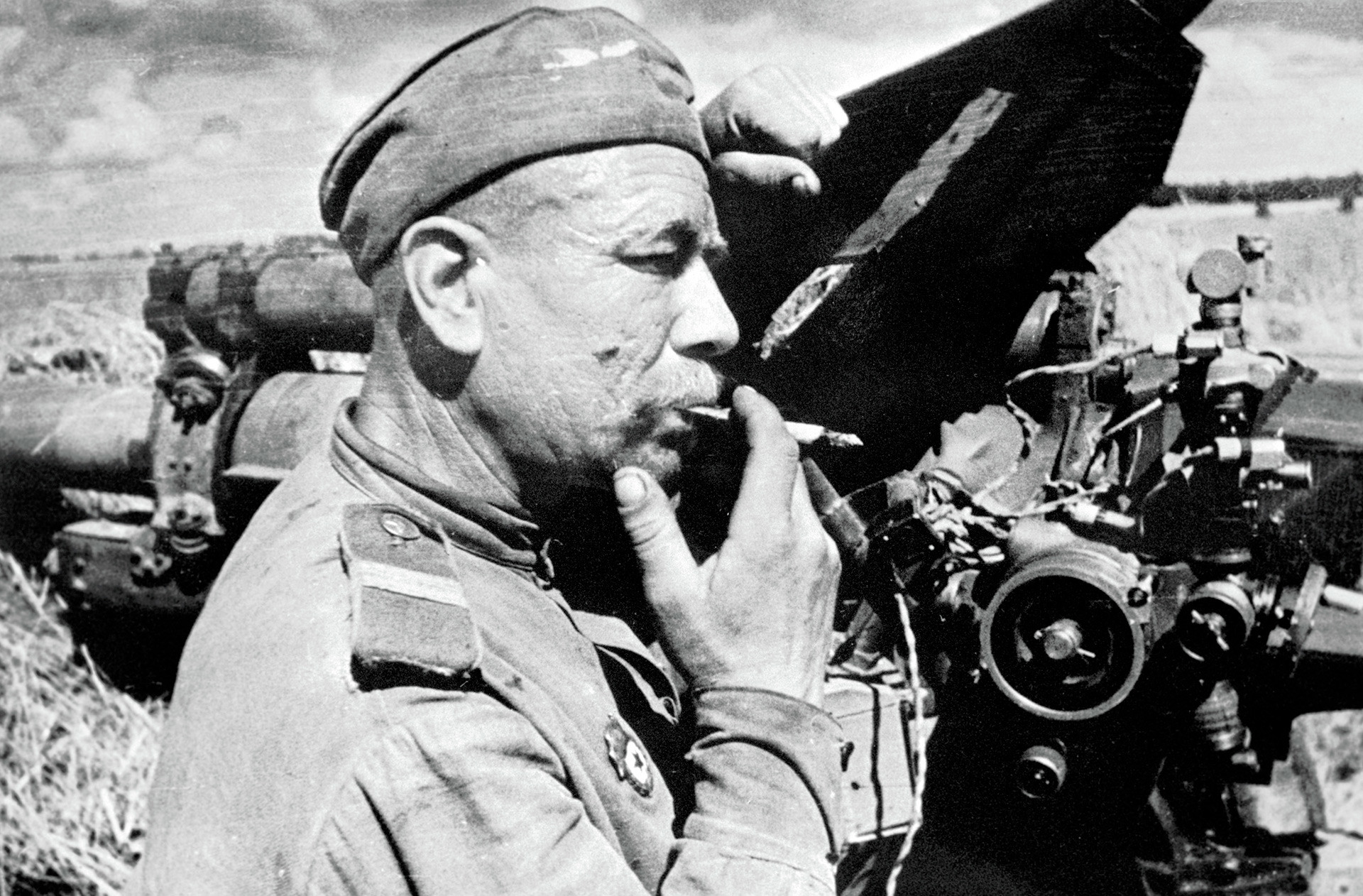 Of all the dangers that awaited American troops in the USSR, the most acute were infections and venereal disease that were raging in the country. The soldiers were advised to be extremely cautious. Also, there were some deadly dont’s: troops were advised to stop when halted, (“Soviet soldiers have been trained to shoot if you don’t stop”); and not to joke about Soviet leaders. There is no indication of the punishment, but we know that in 1944 joking about Joseph Stalin or one of his deputies could have grave consequences.

There is some funny advice: “Carry toilet paper with you. Paper of all kinds is scarce.” Some useful advice: “Be generous with your cigarettes.” To this day in Russia, stinginess in terms of tobacco is considered very poor behavior, and in wartime this was ten times the case. It was also advised to always shake hands – the ultimate Russian man’s greeting.

Some advice, however, is outright stupid: “Don’t call Russians tovarisch (comrade). This is a salutation used only between Soviet citizens. Use instead the word gospodeen, meaning ‘mister.’” Well, this is so inaccurate that it could have led to a conflict; gospodeen is how noble people were addressed in Imperial Russia. Saying this to a Soviet communist citizen could lead to a very awkward situation.

In the end, the book’s main point is nothing but laudable and can be applied to today’s Russia: “If you are sensible and use your head, you will usually find that people in the USSR are easy to get along with.”

In the end, U.S. soldiers didn’t serve in Russian lands, but we must acknowledge that this manual, even though made in the harsh time of war, taught readers to respect and learn about Russians and their way of life, which is always a good thing to do, comrades.