5 foreign embassies that are marvels of old architecture in Moscow 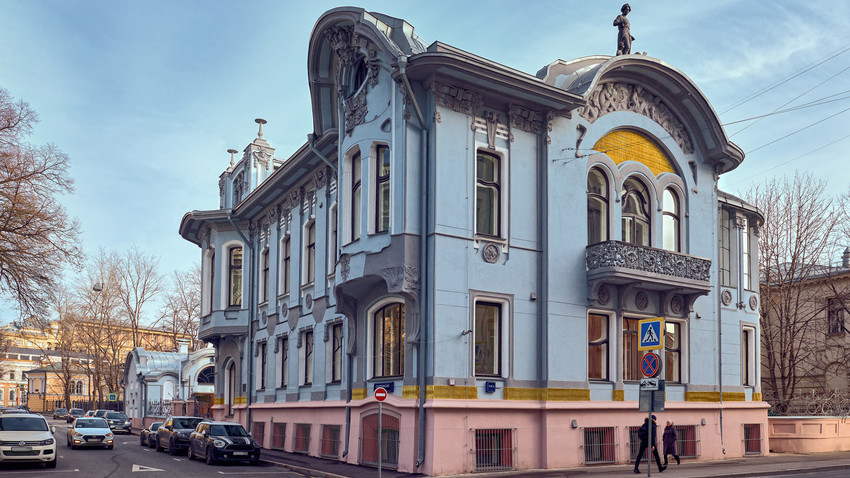 Legion Media
Moscow is jam-packed with architectural landmarks and historic buildings. Everyone knows the red-bricked Igumnov House, the longtime residence of the French ambassador, and the lemon-yellow Spaso House, with its imposing columns, strongly associated with U.S. diplomacy. To go off the beaten path, we’ve compiled a list of some hidden gems to add to your itinerary.

Official diplomatic relations between Iceland and the Soviet Union were established in the midst of World War II, in 1943. 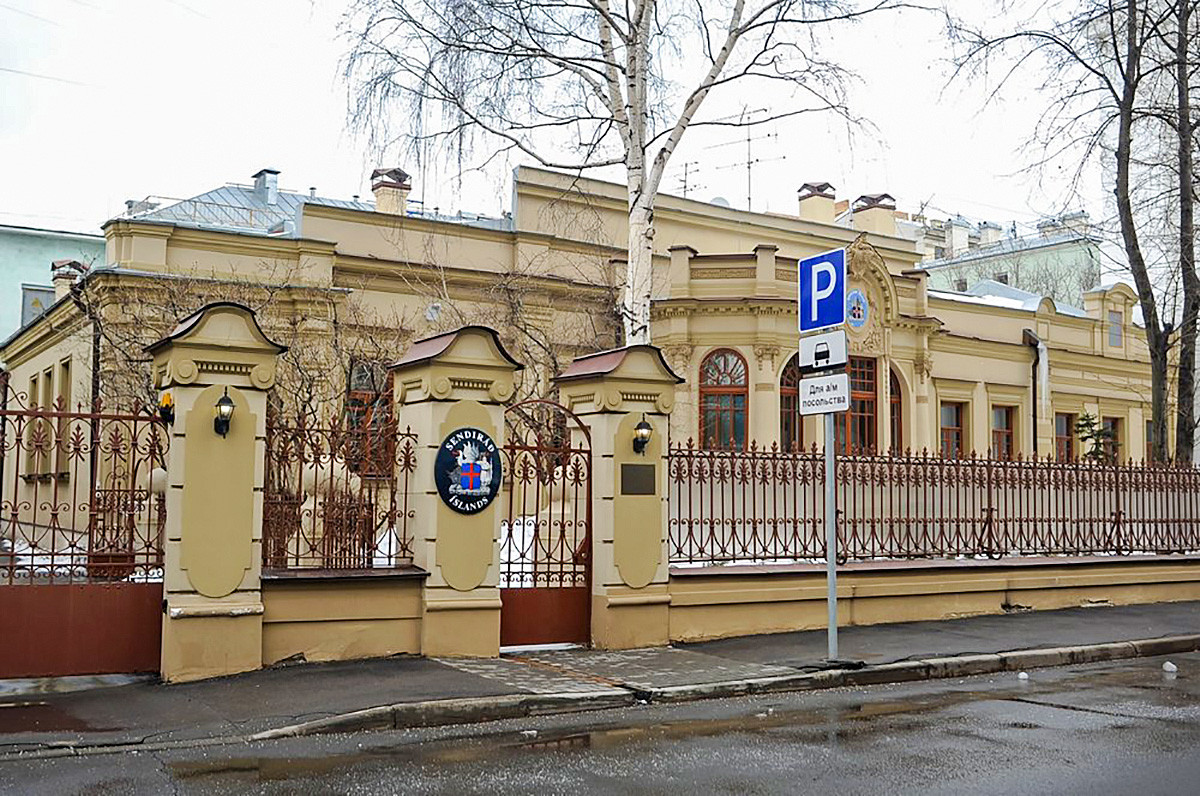 The following year, Iceland opened its embassy in the heart of Moscow at Khlebny Lane, 28. Prior to that, between 1935 and 1941, it was the official residence of German military attaché Ernst August Köstring, who took part in the historic Molotov-Ribbentrop Pact negotiations in 1939. 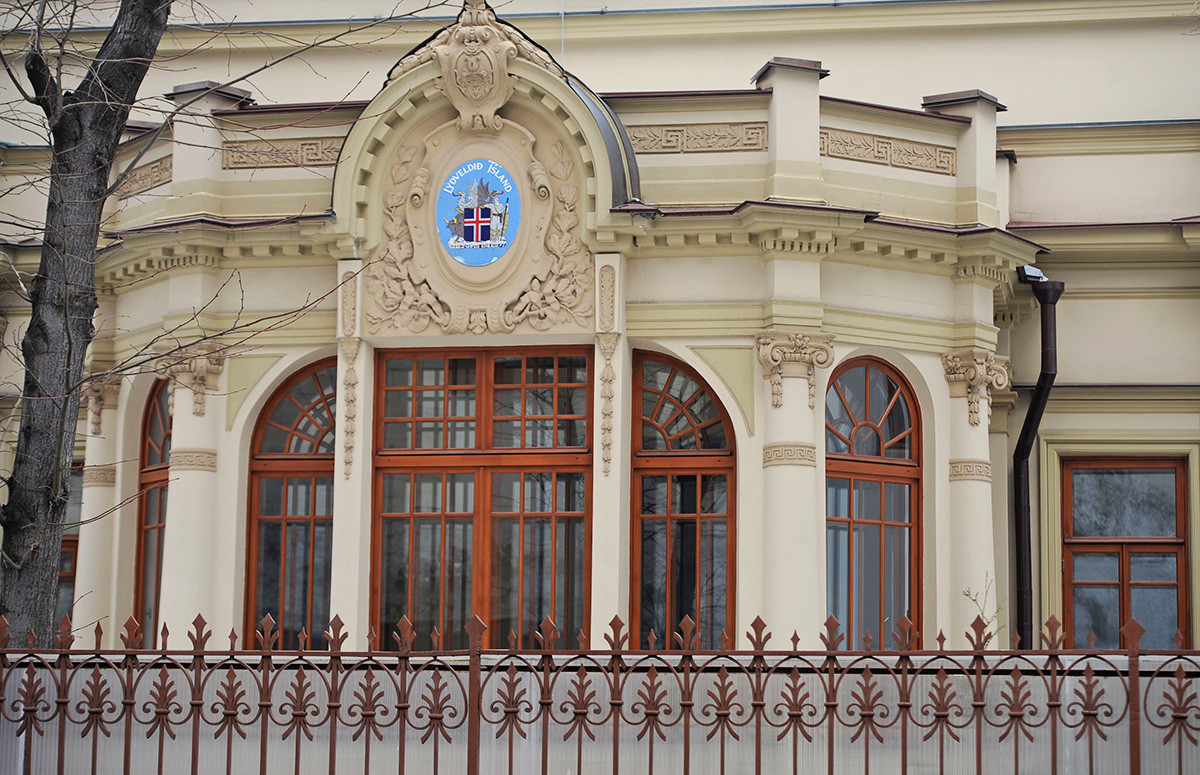 Originally built in 1815, the one-storey construction became a symbol of the Empire style in architecture, with unique ornaments and richness of decorative detail. The long and lavish building boasts a winter terrace and a small garden. It was once home to Aleksandr Pushkin’s friend Aleksey Verstovsky, whose composition ‘Askold’s Grave’ became the first ever Russian opera performed in the United States.

One can’t miss an elegant mansion that sits at the corner of Skaryatinsky Lane and Povarskaya Street, 44. It’s clear from the first glance why the brainchild of prominent Russian architect Lev Kekushev has been considered one of the most beautiful Art Nouveau buildings in Moscow. 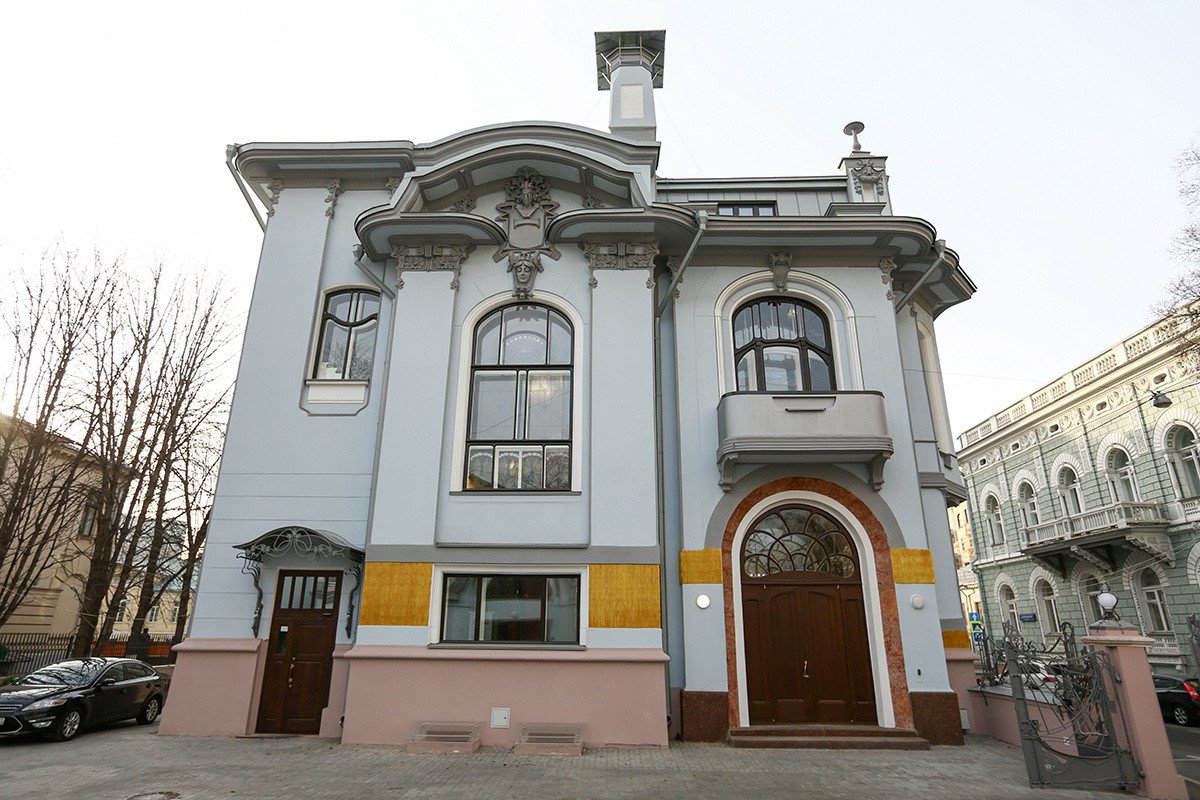 It has all signature traits of the refined style, with asymmetry of shapes to create an unusual form of the building, tripartite Wyatt windows for plenty of natural light and generous use of symbols, decorations and lion ornaments. 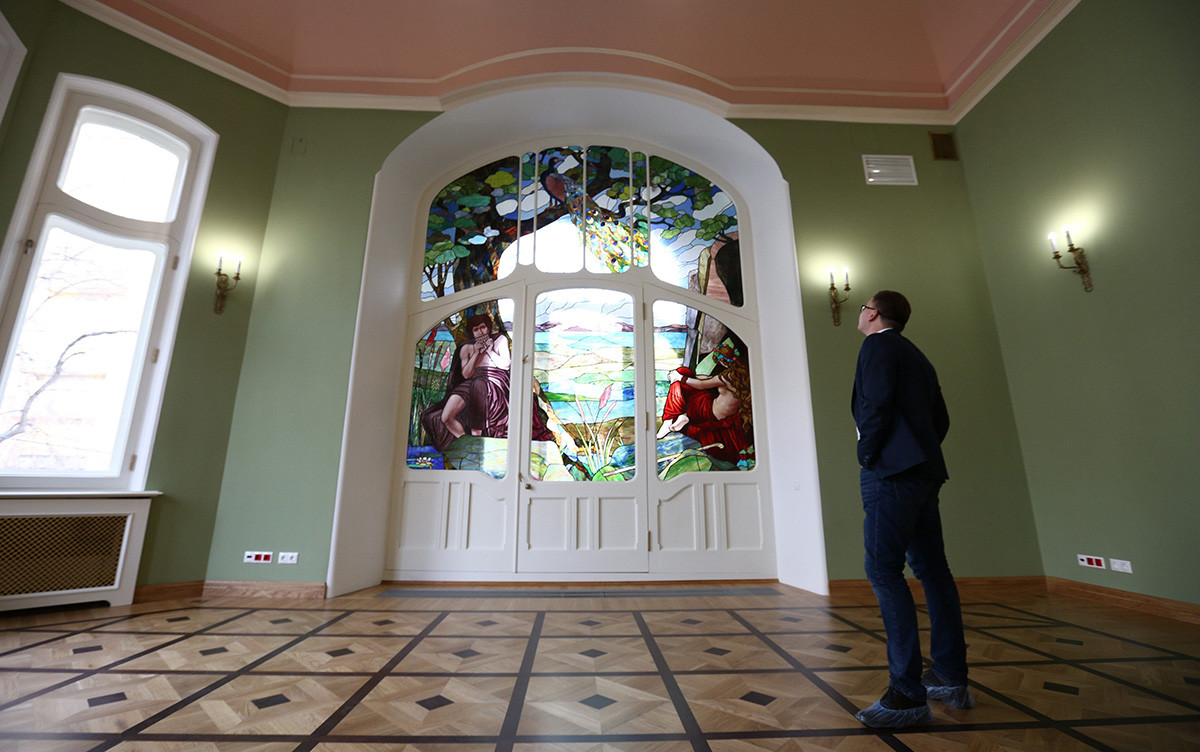 The house was built around 1904 and apparently cost a fortune. No wonder it took five years to find a buyer. Ivan Mindovsky, an affluent merchant and co-owner of the Volga manufactory of paper and linen products, moved into the house in 1909 and lived there until his death, in 1912.

After the Russian Revolution, the building was nationalized. In 1924, the year Vladimir Lenin died, the house became home to the Swedish diplomatic mission. 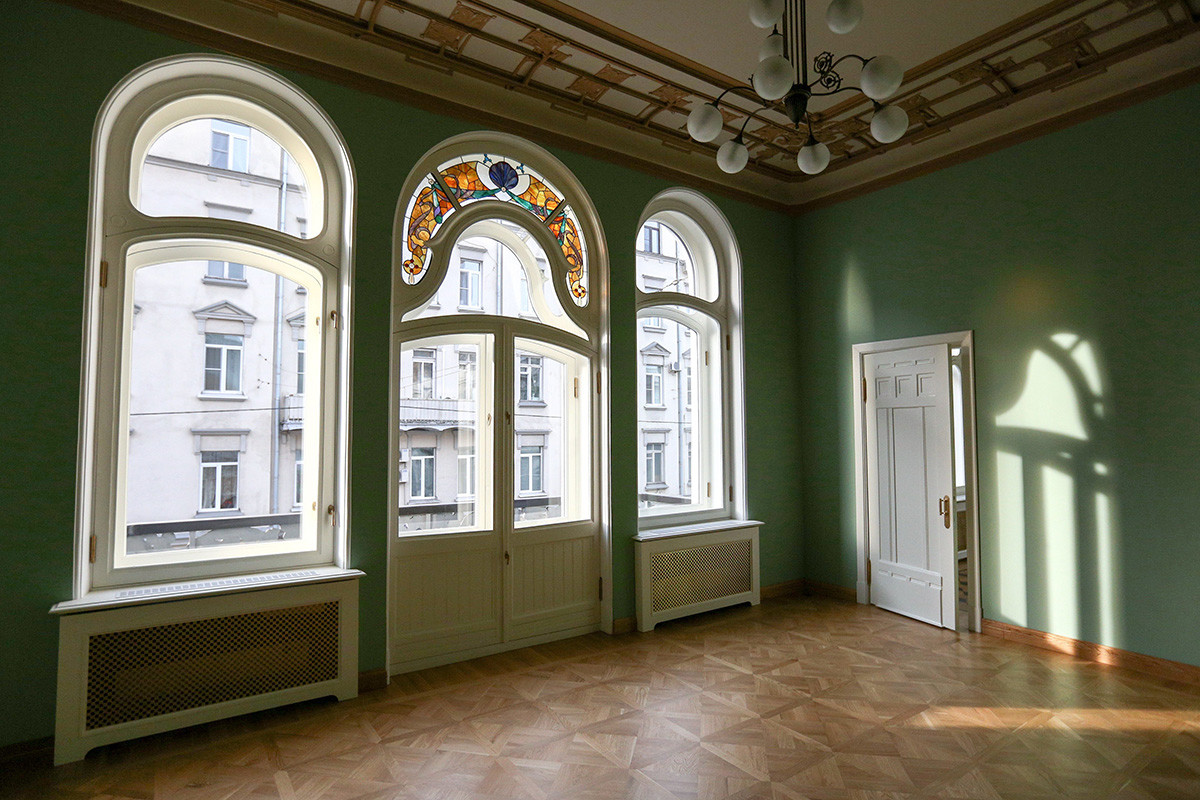 Since 1973, it has been the New Zealand embassy headquarters. The spouse of John Larkindale, who was his country’s ambassador to Russia between 1996 and 1999, was so impressed by the building’s grandiose style she wrote a book about the history of the house.

Last year, the embassy was given a major facelift. Aurora, the goddess of dawn, reappeared on the southern façade of the building.

There were times when the USSR and Chile didn’t get on like a house on fire. Full diplomatic ties were established in 1944 only to be cut just three years later. Restored in 1964, formal relations were interrupted again after the 1973 Chilean military coup. 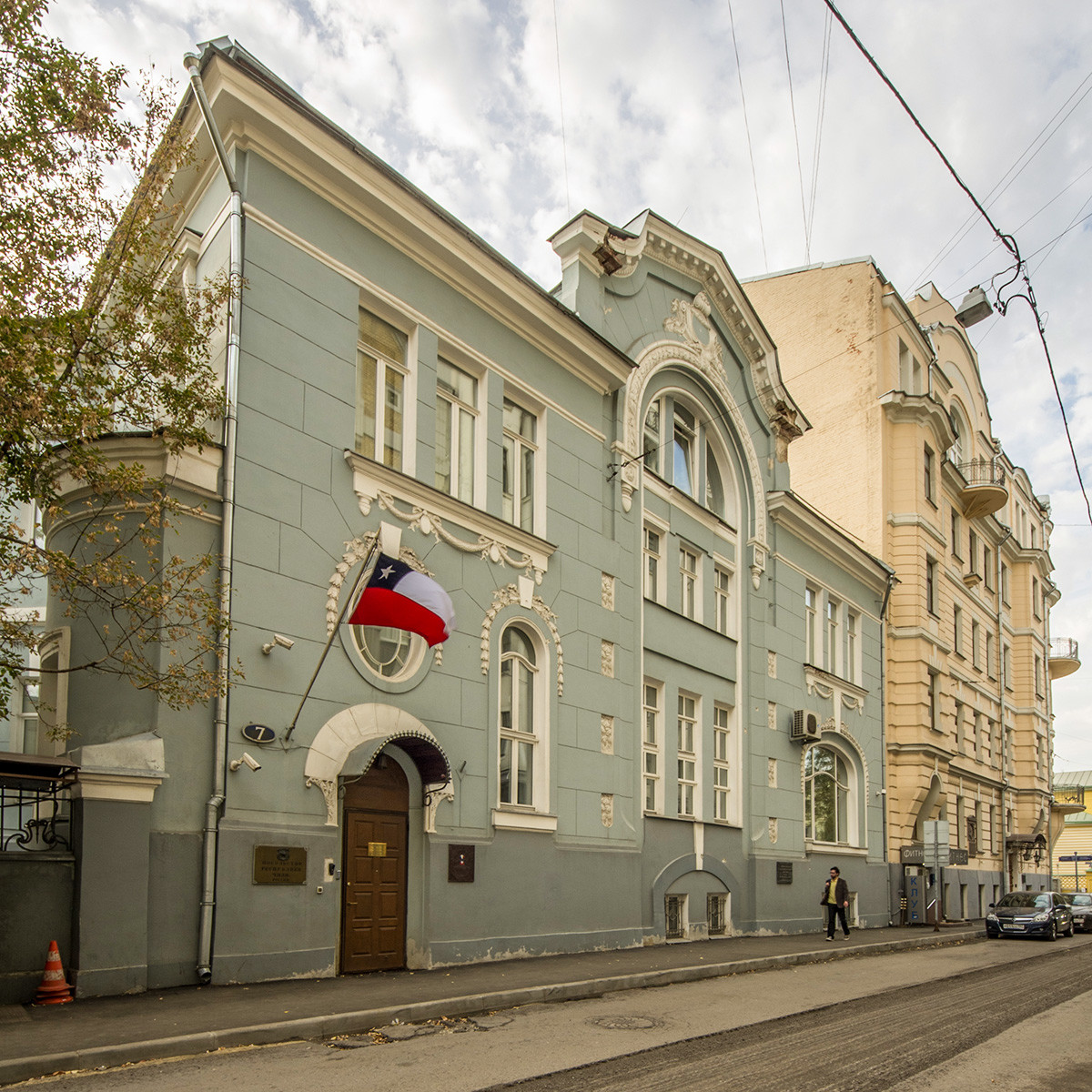 Only in 1990 did Moscow and Santiago eventually find common ground. Since then, a historic house at Denezhny Lane 7, right behind the iconic Stalin-era building of the Ministry of Foreign Affairs, has been a home away from home for Chilean diplomats.

READ MORE: The most fairy-tale houses of old Moscow (PHOTOS)

The Art Nouveau wonder was built around 1912 and is part of Moscow’s cultural heritage. It was designed by up-and-coming Polish architect Adolf Seligson, who studied in St. Petersburg and came to Moscow after spending a year in Paris, where Art Nouveau style was all the rage. 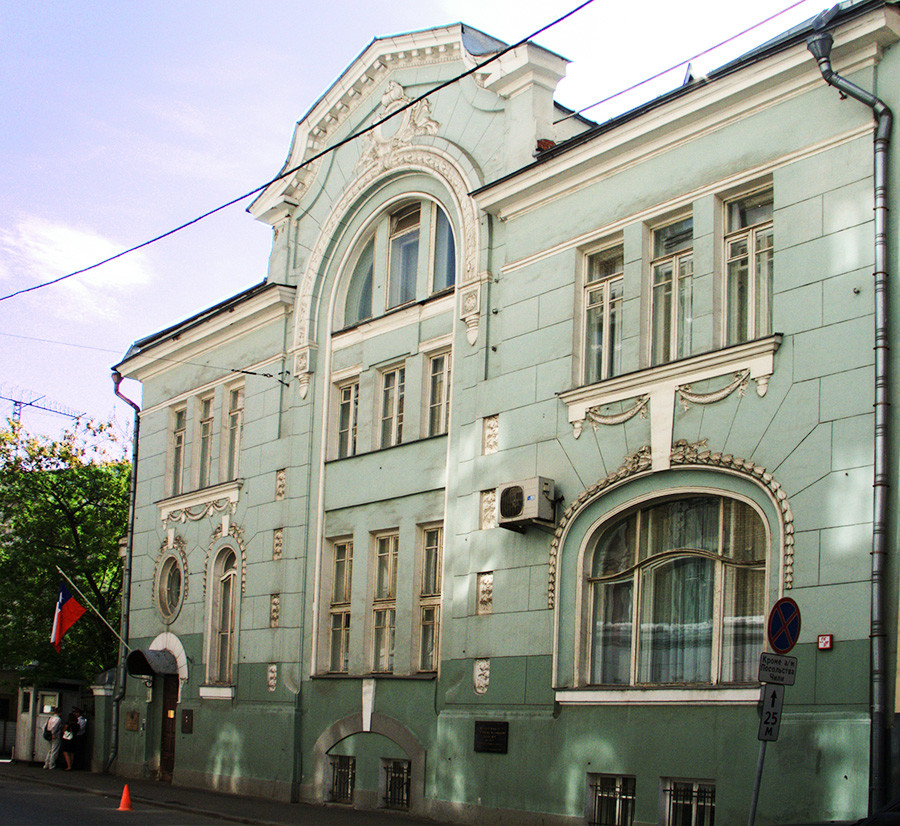 The two-storey building initially belonged to Herman Broido, an entrepreneur who regularly bought property to build and rent the apartment houses. He found a buyer even before construction of the building was over. Mr. Viktorin Burdakov, the owner of several gold and platinum mining companies, bought the palace and immediately moved into the twenty large rooms to enjoy some peace and serenity.

It’s an old story indeed, as diplomatic relations between Russia and Argentina were established as far back as in 1885. 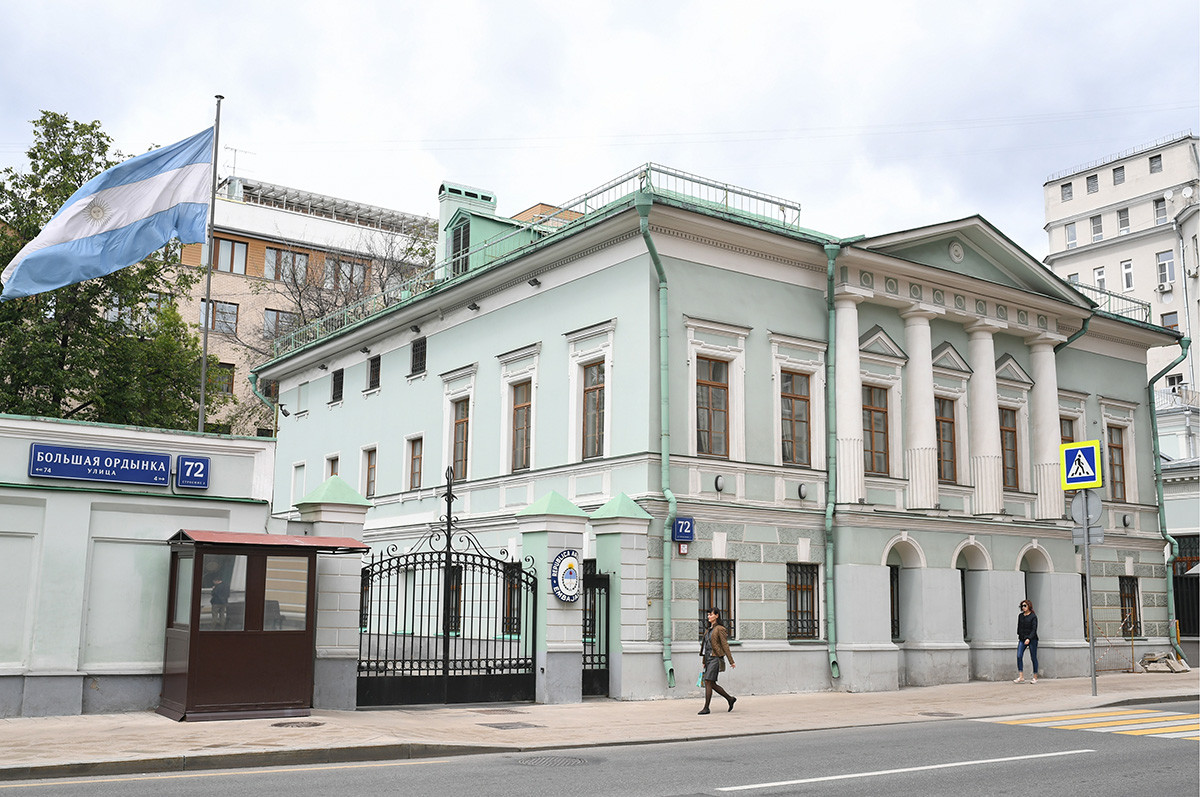 An architectural gem, the Empire style building at Bolshaya Ordynka 72 was built in 1823. Designed in a quiet but distinctive manner, it was meant to become the new home for Nadezhda Lobanova, a merchant’s wife. She had lived there for nearly 15 years.

In 1859, new owners moved in - brothers Aleksei and Nikolai Pugovkin. The two merchants decided to take time by the forelock and revamp the building. The result was a truly eclectic style. 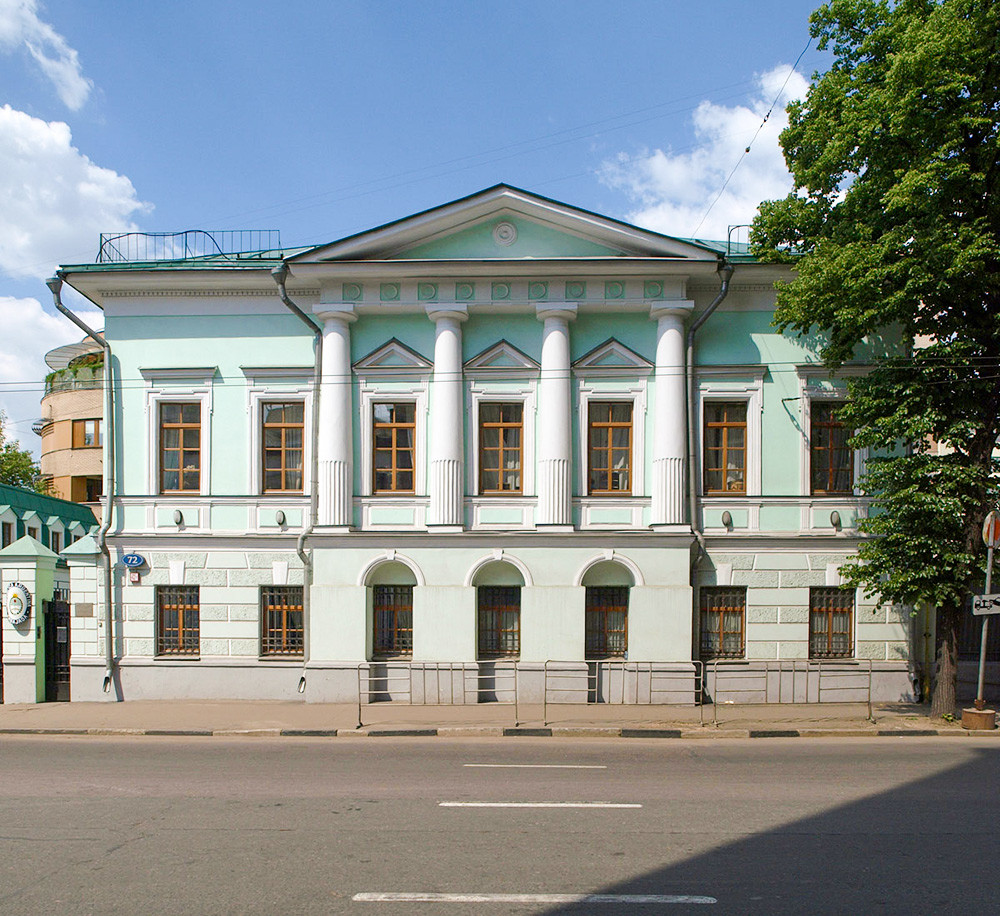 In 1907, another merchant named Aleksandr Kuleshov bought the mansion. Prior to becoming Argentina’s permanent address, the antique building housed the Embassy of Rwanda.

In 2020, nearly two hundred years after it was originally built, the exterior of the building still retains its Empire-style charm and a rare historic, though slightly nostalgic appeal.

Nestled right in the heart of the old city, at the intersection of Starokonyushenny and Prechistensky lanes, the embassy is a jewel of stunning architecture. The building with a dome and columns is a blend of old and new styles of design, reminiscent of homes of noble families described in Leo Tolstoy’s novels. 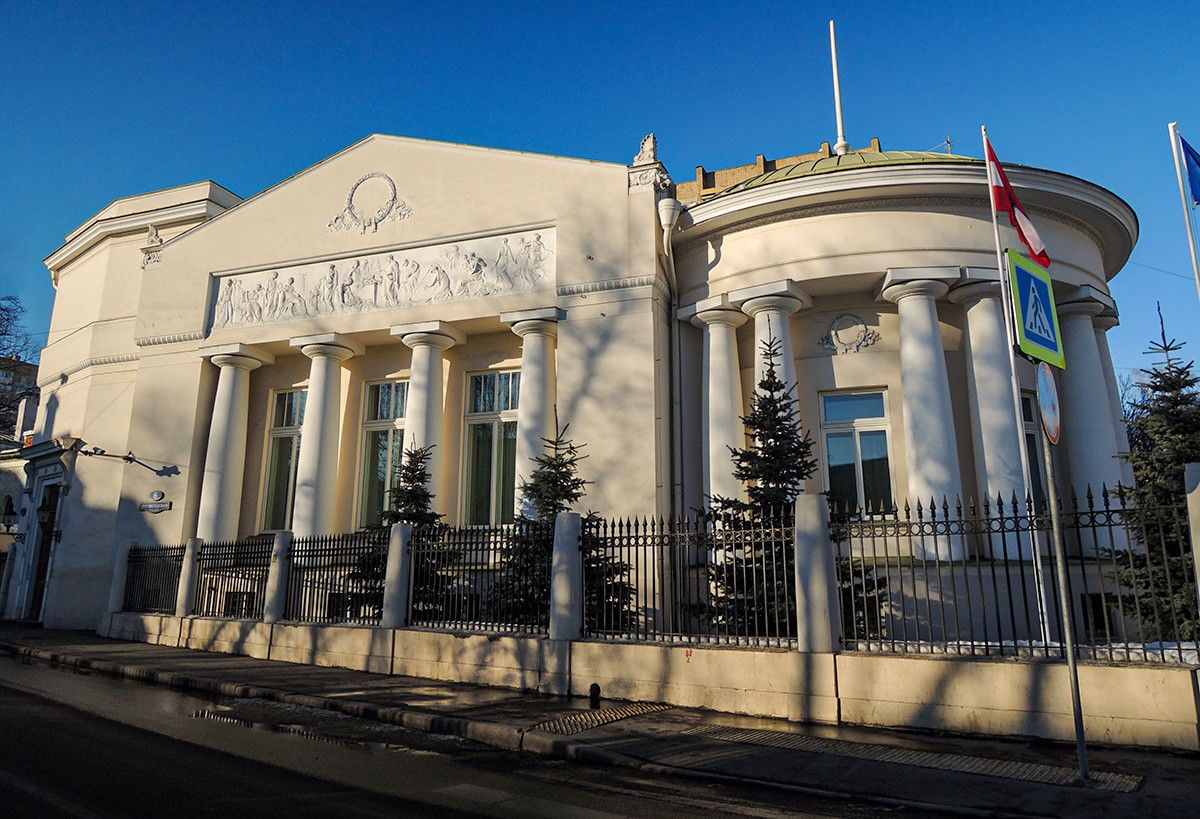 Masterminded and built by neoclassical architect Nikita Lazarev in 1906, this century-old palace is best known as the Nikolay Mindovsky House (as mentioned above, Nikolai’s father, Ivan Mindovsky, owned three mansions in Moscow.) Nikolai lived there right until the Lenin-led Bolshevik Revolution of 1917.

In the 1920s, the mansion became a civil registry office. It was there that poet Sergei Yesenin married his beloved wife, American dancer Isadora Duncan, and writer Mikhail Bulgakov tied the knot to his second wife Lyubov Belozerskaya, in 1925.

In 1927, the building was leased to the Austrian Embassy. From 1938, it housed the German embassy. Legend has it that the groundbreaking Molotov–Ribbentrop Pact was signed in this very building in 1939. 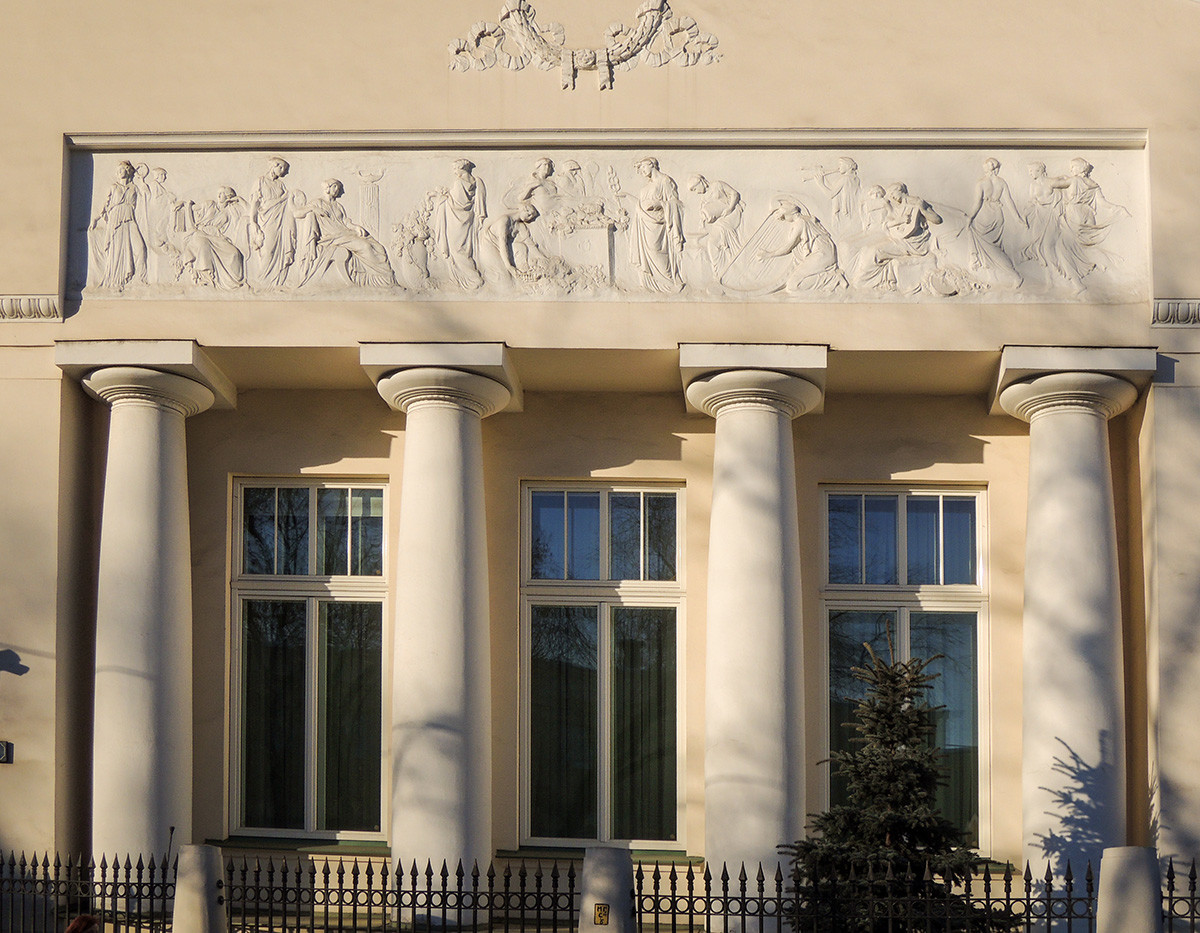 The palace welcomed a number of A-list guests. In 1944, British Prime Minister Winston Churchill stayed overnight at the Mindovsky House (he arrived in Moscow for negotiations with Stalin.)

After Stalin’s death in 1955, the building hosted talks on the Austrian State Treaty, afterwards it became an embassy of independent Austria for a second time.