TOP 5 weapons favored by Russian gangsters of the wild 1990s 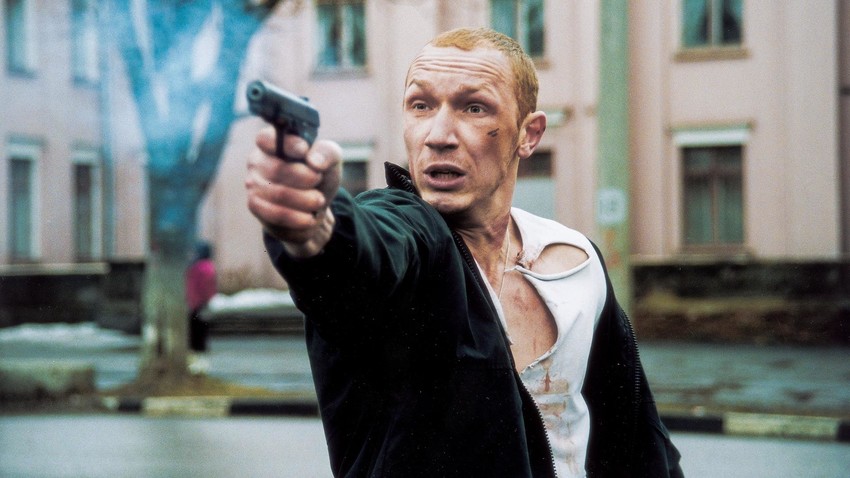 Petr Buslov/STV, Pigmalion Production, 2003
When you needed a gun in the 1990s (and there were plenty of moments like that) in Russia, you could simply buy one or even make one yourself.

1. Tokarev pistol aka the ‘TT’ 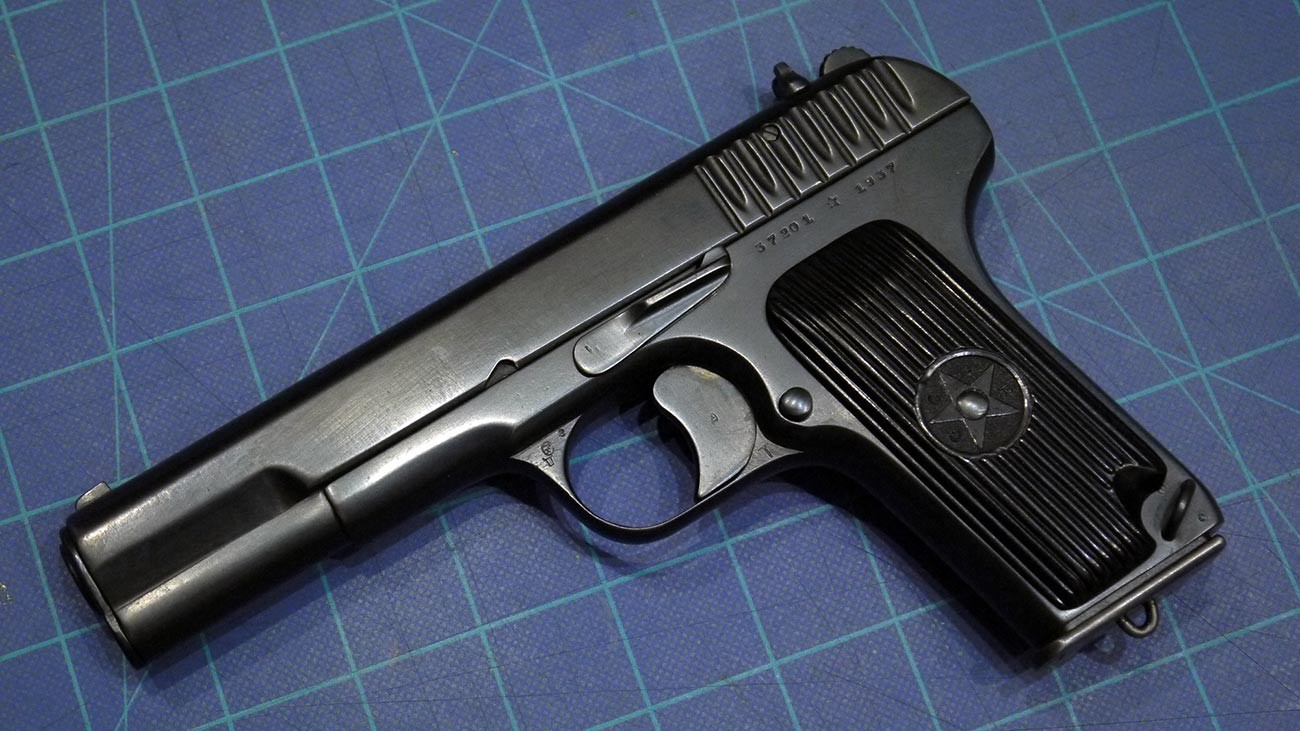 A Soviet produced TT-33 pistol made by the Tula Arsenal in 1937.

The abbreviation ‘TT’ stands for the full name of this Soviet-made handgun - ‘Tulsky Tokarev’. The gun that would go down in history as the “gun for hitmen” was developed in the late 1920s by a Russian gunmaker named Fedor Tokarev at a factory in the city of Tula.

The Tokarev became the very first handgun made in Russia to be adopted as a service weapon for the Soviet Red Army, replacing the famous Belgian-produced Nagant M1895 revolver in the early 1930s. The Soviet army used the Tokarev as the official weapon up until 1952, before it was replaced with the Makarov pistol (see pt. 2 below).

Cheap, simple, and reliable, the Tokarev was produced in abnormal quantities throughout the years in the Soviet Union. Many ‘TT’ guns were lost in battles during World War II and consequently reappeared as people accidentally found or intentionally tracked them across the country.

As the Soviet Union collapsed, the Tokarev guns flooded the black market of newly independent Russia and other post-Soviet states. Its abundance was one of the key reasons the criminals of the wild 1990s favored it over other models. Since the supply was so high, prices for the gun were cheap. Oftentimes, hitmen left the gun at the sight of murder as the used gun had no monetary value whatsoever and it could be replaced effortlessly and cheaply for a new “clean” one.

Moreover, the 7.62×25 mm Tokarev cartridge, an identical twin of the highly popular Mauser cartridge, had great penetrative power, the quality especially favored by the Russian mafia of the 1990s.

2. Makarov pistol aka the ‘PM’ 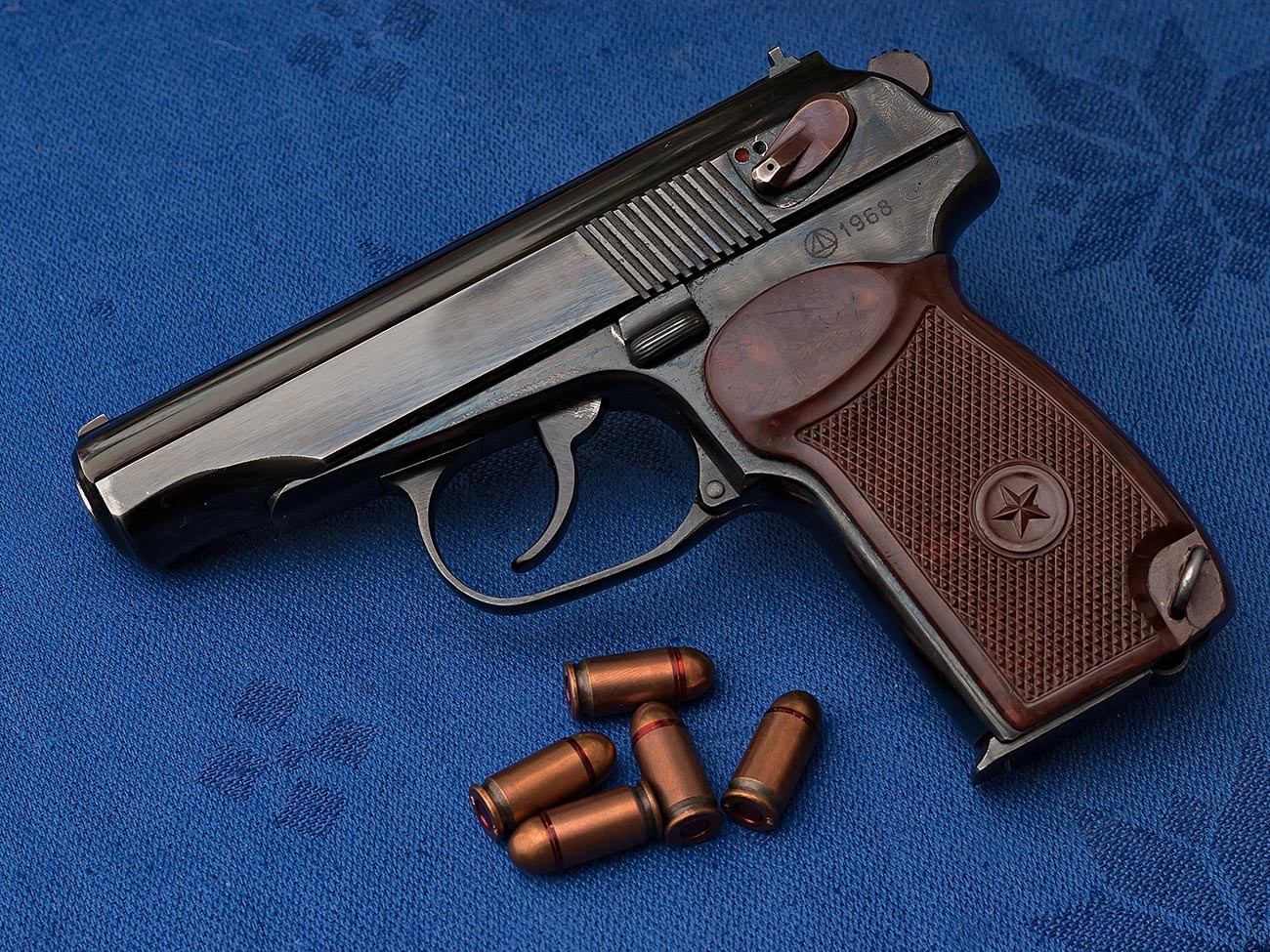 The Makarov came to the Soviet armed forces in 1951 to replace the Tokarev, which Soviet authorities deemed to be outdated by then. Roughly based on Walther ‘PP’, the resulting Makarov handgun used newly developed 9x18 mm cartridges that were more powerful than ones used in the Walther ‘PP’.

After the collapse of the Soviet Union, criminal elements fancied the Makarov perhaps as much as the legendary ‘TT’. Although the Makarov is said to be less powerful, it was also a much more compact model, which made concealed carrying a little easier for the gangsters who prowled the streets of Russian cities in the wild 1990s. Some Makarov guns were also equipped with self-made silencers.

3. Kalashnikov assault rifle aka the ‘AK’ 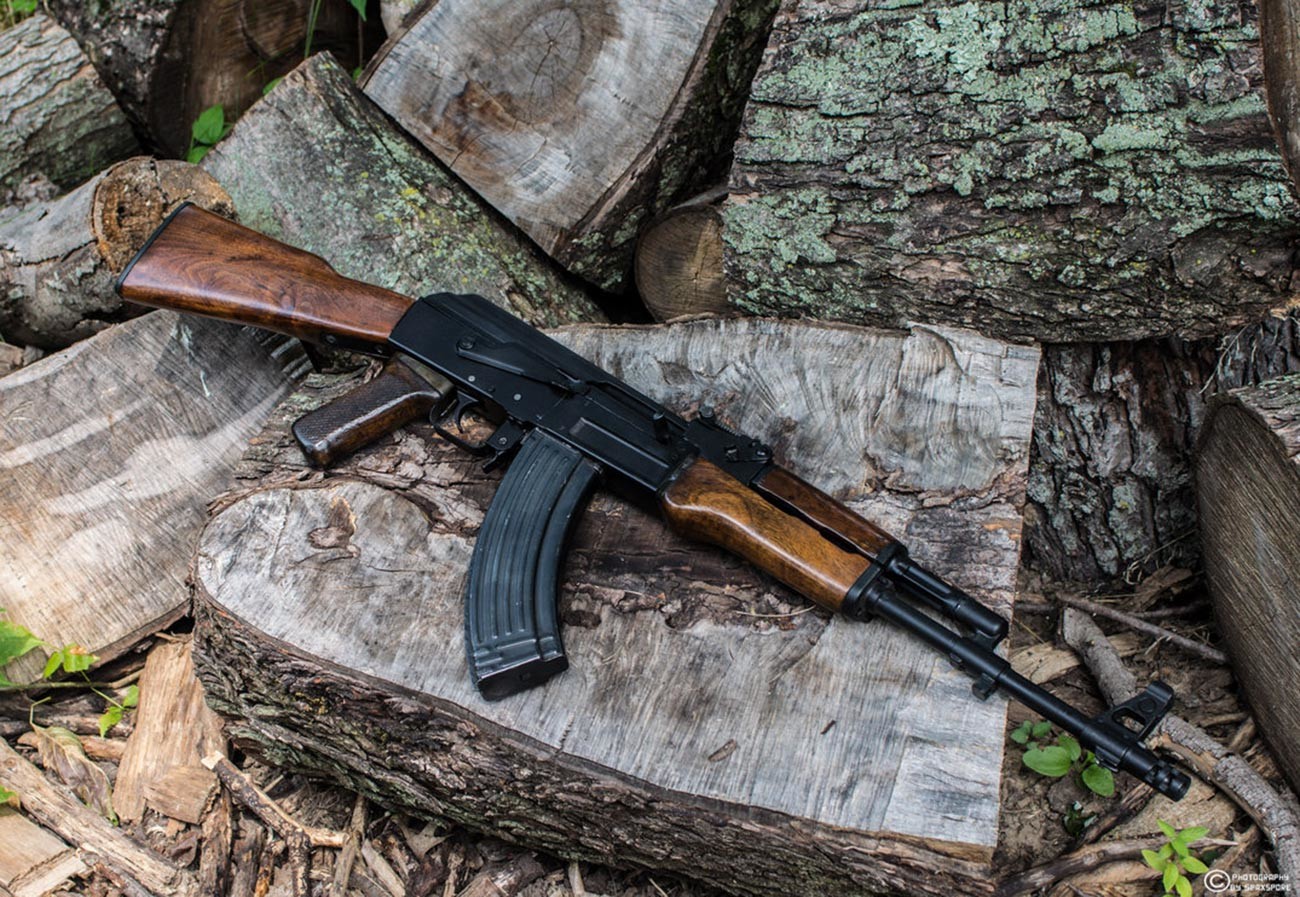 The most reliable automatic gun in the world with tremendous destructive power — what else could a Russian gangster wish for? The AKs were highly popular and just as a highly effective weapon in the criminal underworld.

Since its invention, some 70 million copies of the weapon have been produced in the world, making it the most widespread automatic gun ever made. The abundance on the black market, extreme reliability and simple design made this weapon one of the most popular guns among violent Russian gangs of the 1990s.

Blowing up a head of a rival gang in his own car was a favorite pastime of Russian gangsters during the 1990s. Between 1989 and 1993 the authorities registered some 1,500 cases of missing explosives, which were inevitably sold on the flourishing black market of the 1990s. It’s safe to say a great many cases of missing explosives went unreported throughout the lawless decade.

Besides using IEDs, Russian gangsters did not shy away from resorting to more advanced heavy weaponry, such as grenade launchers, like the Soviet-made RPG-18 ‘Mukha’. In 1999, a 42-year-old man attempted an attack on the U.S. Embassy in Moscow using one such grenade launcher. However, the weapon misfired and the attacker was arrested. 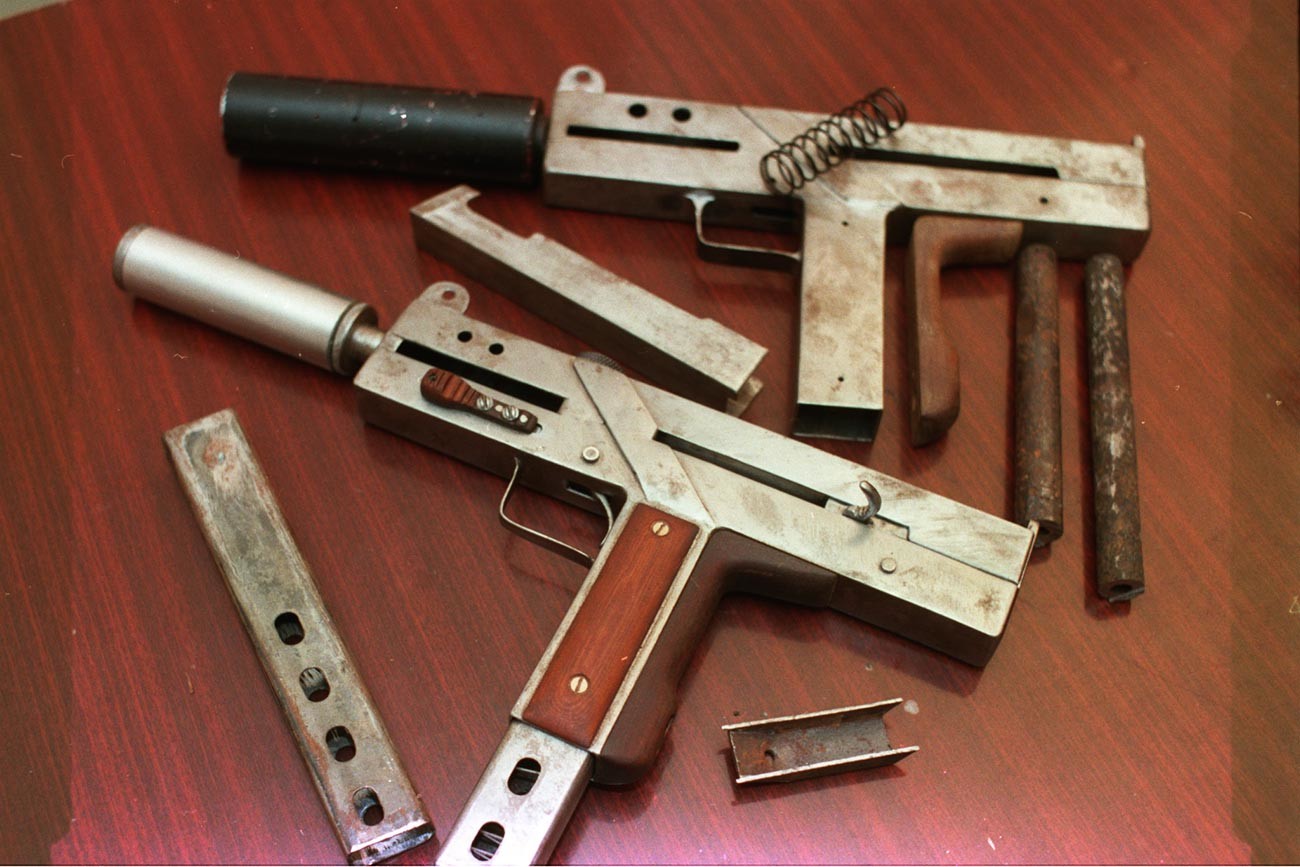 It’s unknown how many homemade guns were produced in the 1990s, but there were plenty.

While the most famous and deadly killers of the 1990s did not have problems with the supply of all sorts of weapons, other hitmen failed to procure a reliable gun in time for the job. The lawlessness of the wild 1990s pushed a lot of people into the criminal underworld, where having a gun meant the difference between life and death. But not everyone could afford to buy a reliable gun on the black market, however cheap it was. Many people simply did not have money for that, but they still needed a weapon. So, making your own gun at home was the solution.

For obvious reasons, it’s unknown how many guns were produced in the 1990s, but there were plenty. Made of all sorts of junk, they were as easily assembled as they were destroyed. The homemade guns included the simplest pistol-like models but also some advanced automatic weapons made by professional handymen. The image of homemade guns was immortalized in the iconic “Brat” franchise, where the hero, a notorious Russian hitman, used them liberally to fight what he considered injustice.

Click here to find out who were ‘thieves-in-law’, Russia’s violent mafia bosses.