Why did the Soviets use TANKS to extinguish fires? (PHOTOS) 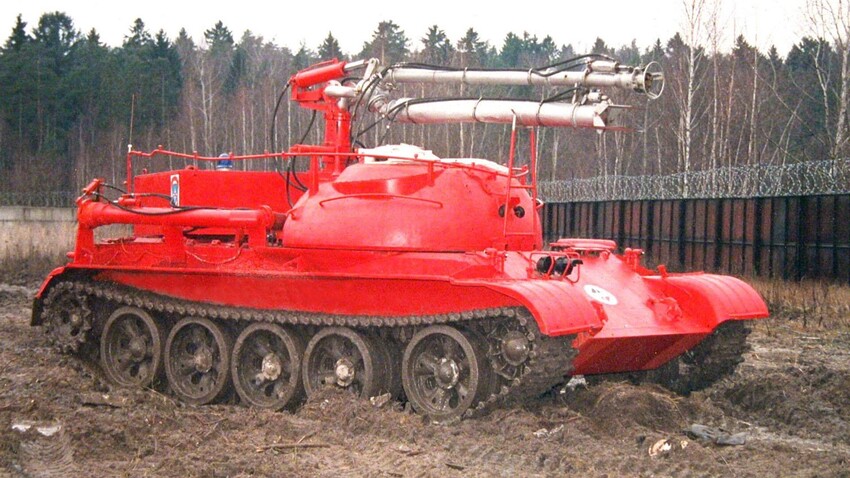 Academy of Fire Protection Service of the Ministry of Emergency Situations of Russia, 2011
Armored vehicles on tracks were effective firefighting machines.

Why not use tanks for firefighting purposes? This exact question was raised by Soviet engineers in the late 1970s.

Heavy tracked armored vehicles promised some theoretical benefits for firefighters at the time.

Firstly, tanks could theoretically deliver water and extinguishing mixtures directly to the epicenter of the fire. Tracked vehicles were not equipped with rubbed tires susceptible to fire and continuous tracks could withstand extensive heat.

Secondly, tanks were thought to be useful for another purpose: to ram the burning debris and hence break the flame into smaller pieces which could be extinguished easier.

Lastly, the armor of tanks could protect personnel from shrapnel and shell fragments, which was a problem for firefighters working at military and artillery warehouses. 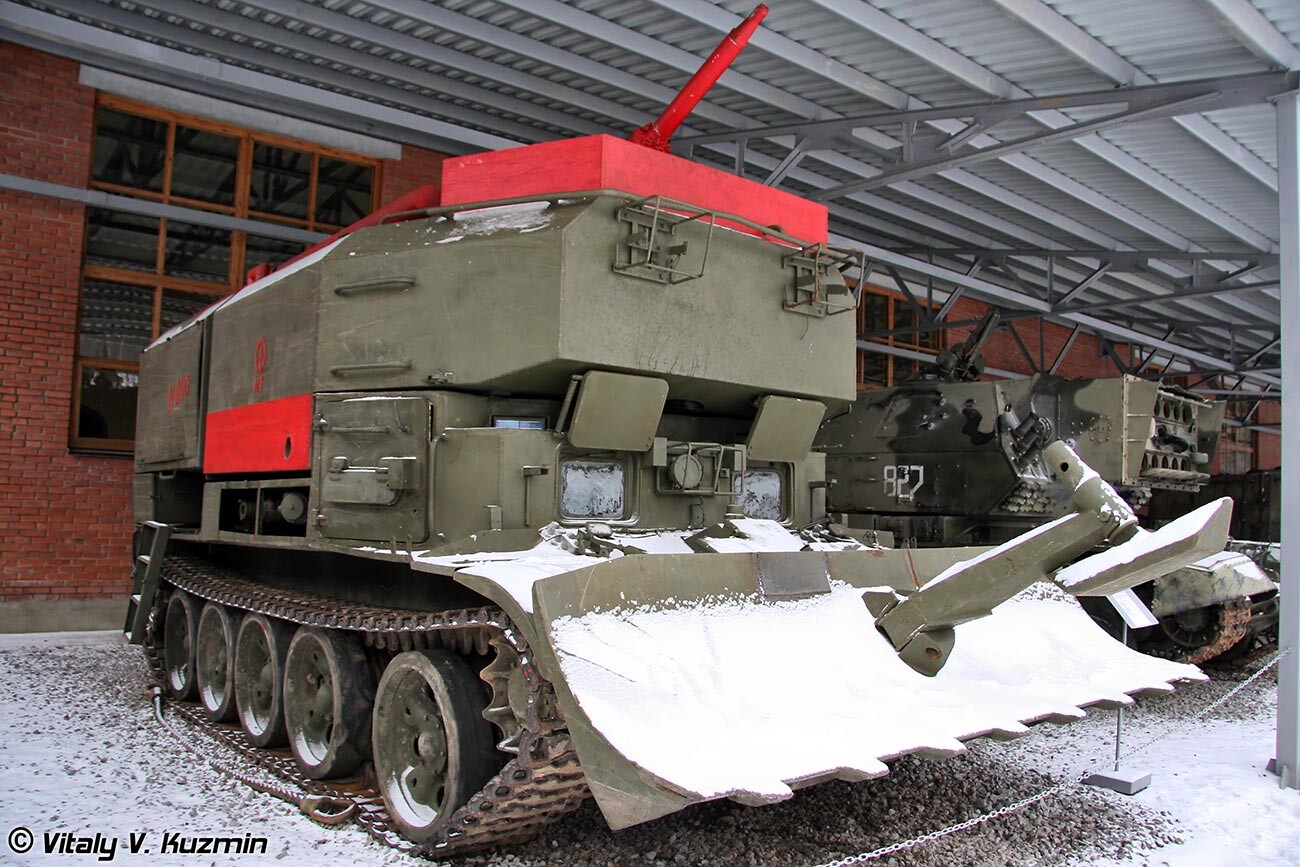 The GPM-54 was the first vehicle of its kind. Produced in the late 1970s at the 17th Armored Repair Plant of the USSR Ministry of Defense in Lviv (part of Ukrainian SSR at the time), the firefighting tank was based on the T-54, one of the best Soviet-made tanks.

After its initial release in 1978, the GPM-54 firefighting tanks stood guard at the Baikonur Cosmodrome, which was part of the USSR back then and which Russia now rents from Kazakhstan since the collapse of the USSR in 1991.

After the explosion of the nuclear reactor at the Chernobyl nuclear plant near the city of Pripyat (now Ukraine) on April 26, 1986, some GPM-54 tanks were used to fight fires on the site.

By the early 1990s, GPM-54s were being allocated to fire departments specializing in extinguishing natural and large-scale industrial fires.

After the collapse of the USSR in 1991, the machines were also used to extinguish fires in artillery ammunition depots.

Despite the promising idea behind the invention, the result had some serious drawbacks. One of those was the vehicle’s inability to simultaneously move and operate the water pump.

Another disadvantage was that the diesel engines could not withstand heat and sometimes stopped in the middle of the mission from overheating and lack of oxygen on the site of the emergency. For crew members, being trapped inside a metal “can” without a functioning engine was akin to a death sentence as they could not possibly escape because of extreme temperatures outside. 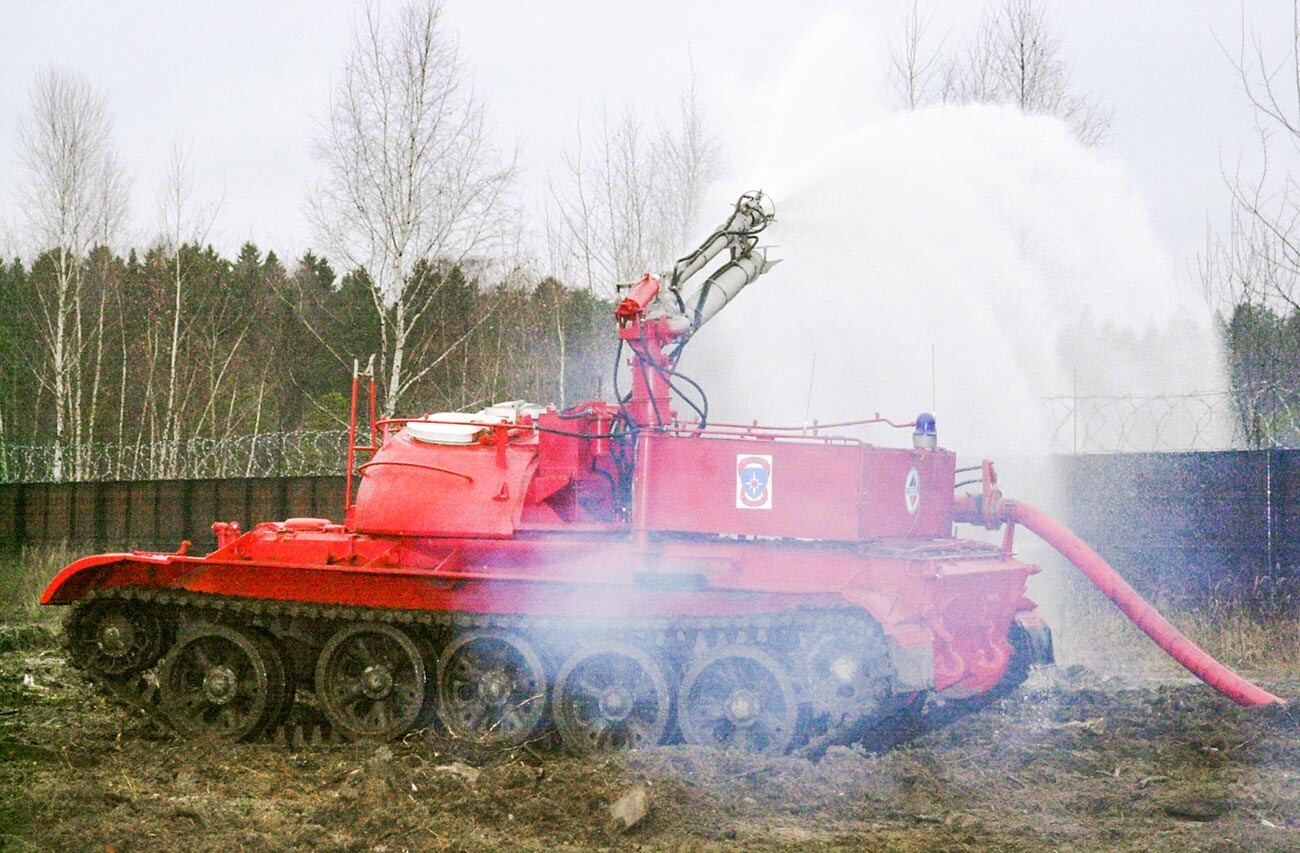 The drawbacks pushed engineers towards an updated model of a firefighting tank. In the late 1990s, a prototype called SLS-100 was developed.

The machine was equipped with a remote control system and therefore it was able to operate it near sources of radioactive and chemical contamination, as well as in other hazardous areas without endangering the crew. When conditions permitted, however, the firefighting tank could be operated by a crew of two.

The water and foam delivery range was drastically improved and amounted to 100 and 70 meters, respectively. 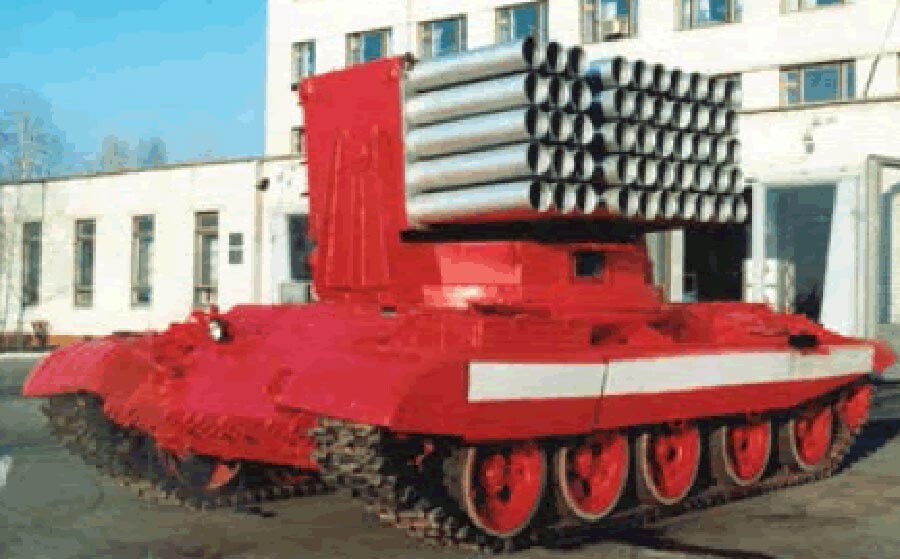 Another firefighting tank model — the Impulse-2M — was released in 1988. The chief purpose of this model was to solve the problem of the fire-extinguishing salvo volume that was rather inadequate on other, similar vehicles.

The new firefighting tank was based on the Soviet-made T-62 battle tank.

The Impulse-2M had a 50-barrel multiple-launch cannon for launching capsules charged with water, sand or extinguishing powder. The tracked machine was able to accelerate up to 50 km/h and weighed some 35-tons.

It could withstand the recoil from five consecutive volleys of ten barrels, due to the solid T-62 platform. The automated control system blocked accidental salvo of more than ten barrels at a time. In addition, the irrigating system protecting the machine’s body from burning and overheating was installed to eliminate the most pressing problem of the GPM-54 model.

Click here to see PHOTOS of a Soviet MONSTER flying machine that ended up beached on a Caspian Sea shore.