British royal family and the last Romanovs pictured together (PHOTOS) 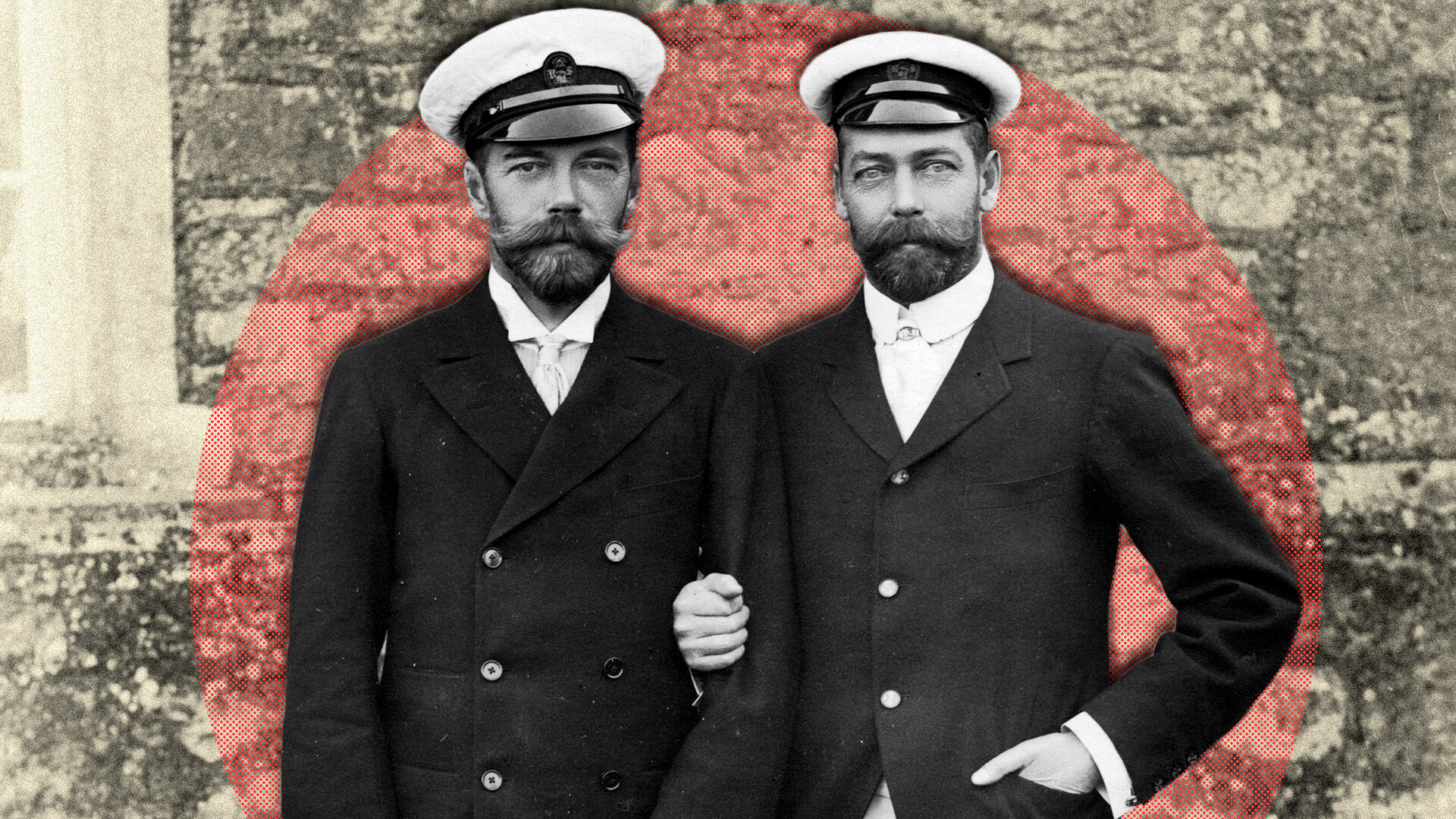 As we know from history (and from the season 5 of ‘The Crown’ on Netflix), the Russian and British royal families had strong and close ties and were close relatives. There are even some photos of them posing together, which is incredibly exciting to see. Here are just a few of them.

First of all, it’s absolutely uncanny how similar Emperor Nicholas II of Russia and King George V of the United Kingdom looked! 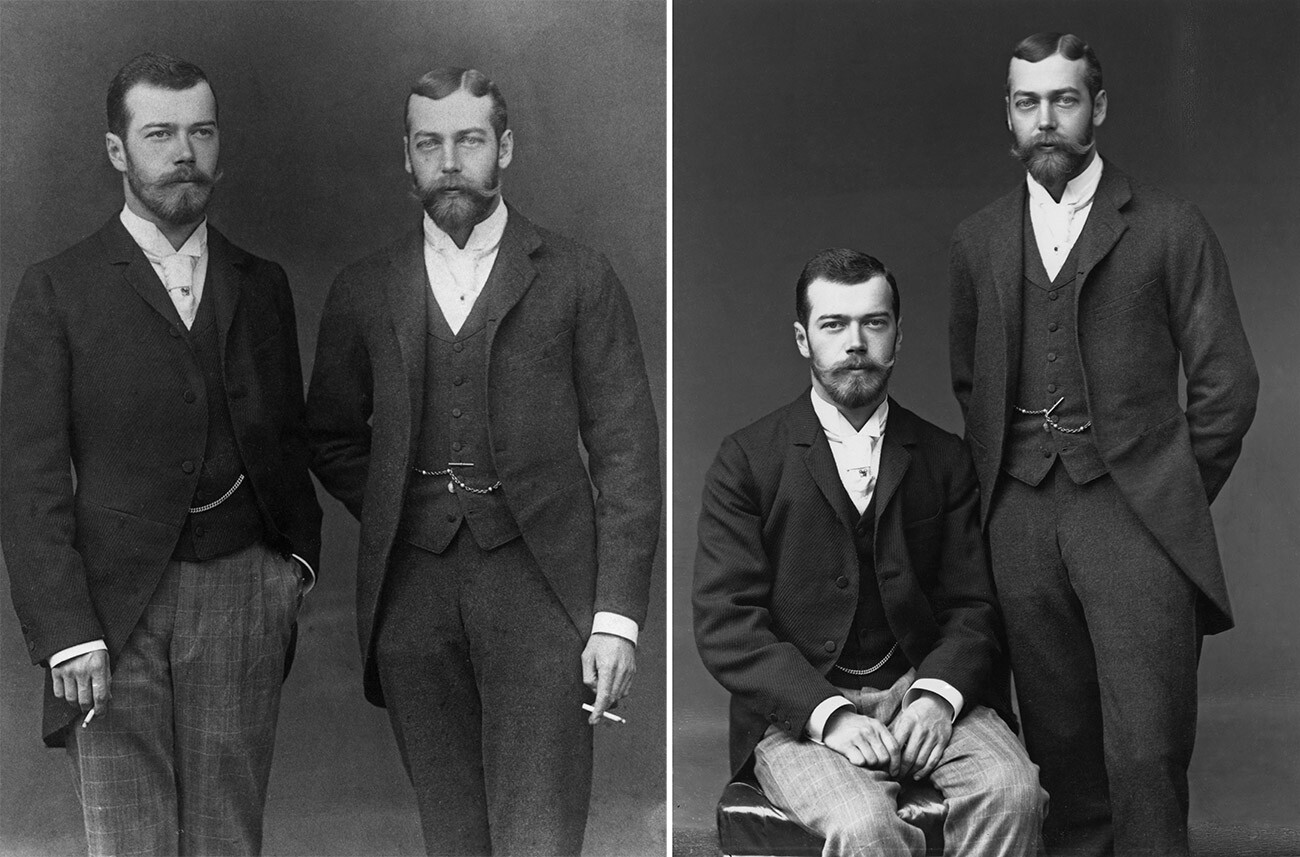 They were first cousins (their mothers, Alexandra of Denmark and Maria Feodorovna, Princess Dagmar of Denmark, were sisters). 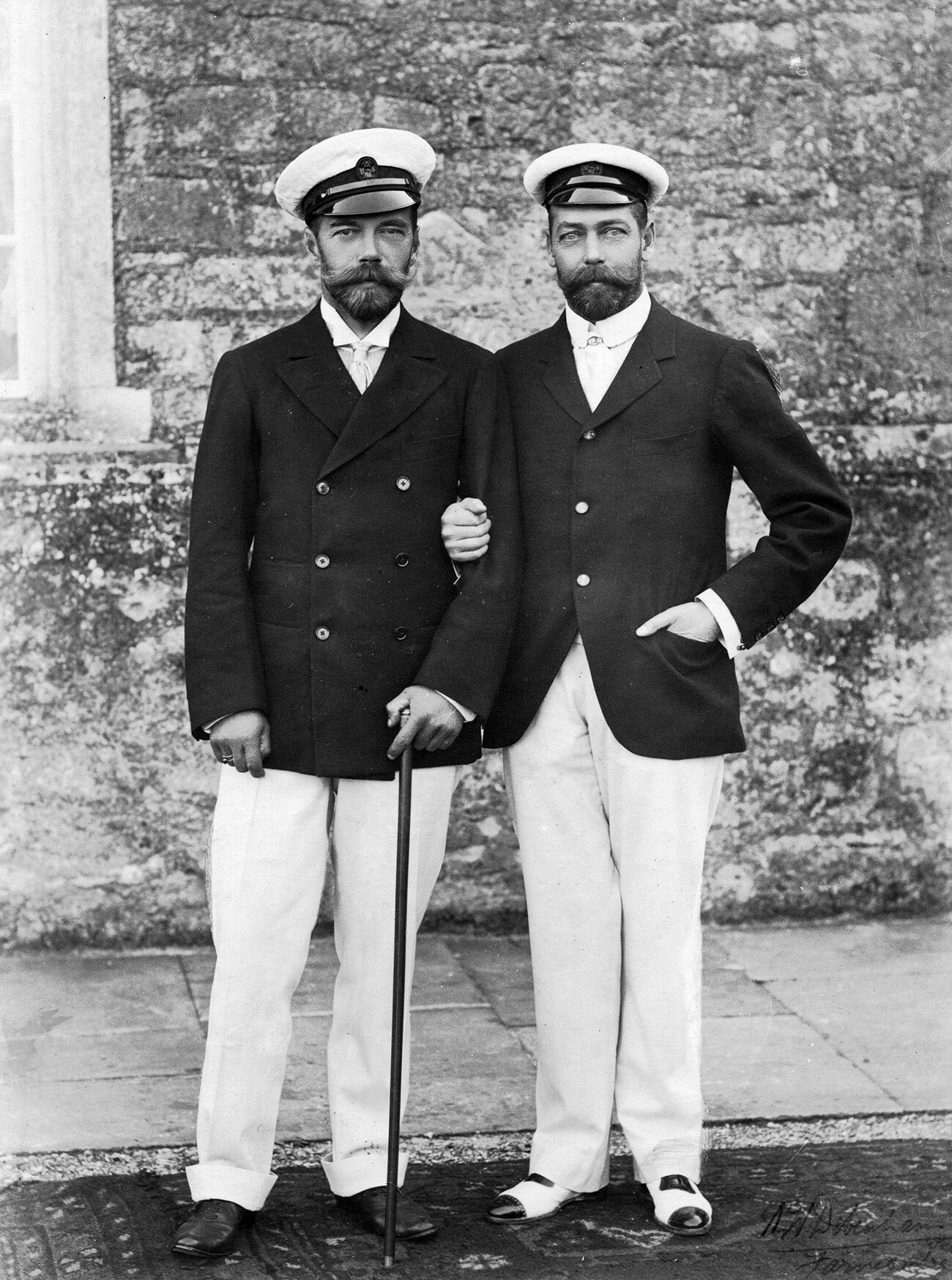 Below, they are wearing German military uniforms, pictured in 1913 in Berlin, just before World War I. Rulers of three countries entering the war appeared to be relatives: German emperor Wilhelm II was first cousin to both King George V and Nicholas II’s wife, Empress Alexandra. 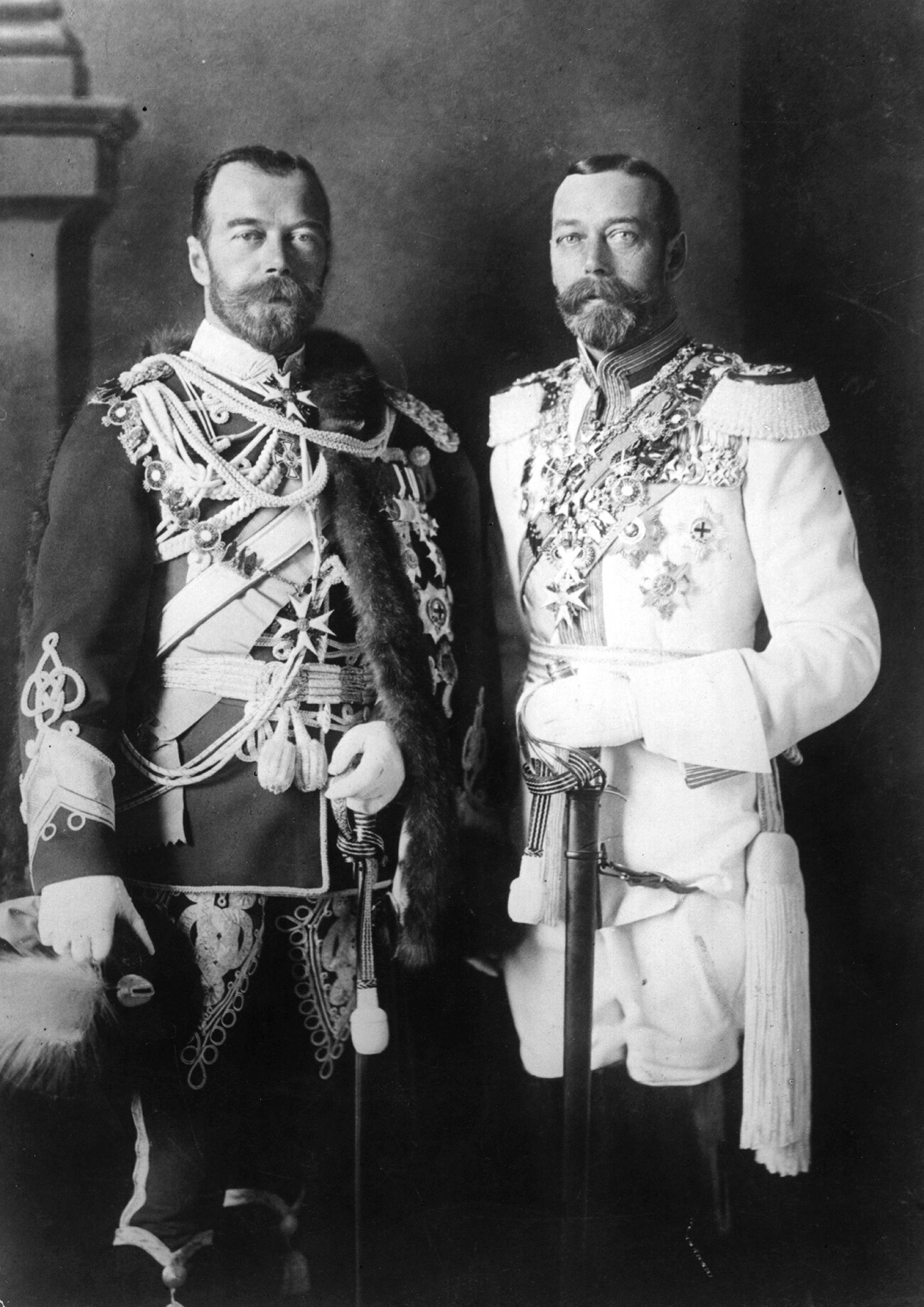 Russia’s last tsar, Nicholas II, had the strongest connection to the British royal family. He married Queen Victoria’s granddaughter Alexandra. In September 1896, Nicholas II, who just ascended the Russian throne, paid a visit to Great Britain and was a guest at Queen Victoria’s Balmoral Castle. Nicholas is pictured below (standing in the middle) with Queen Victoria in the carriage. 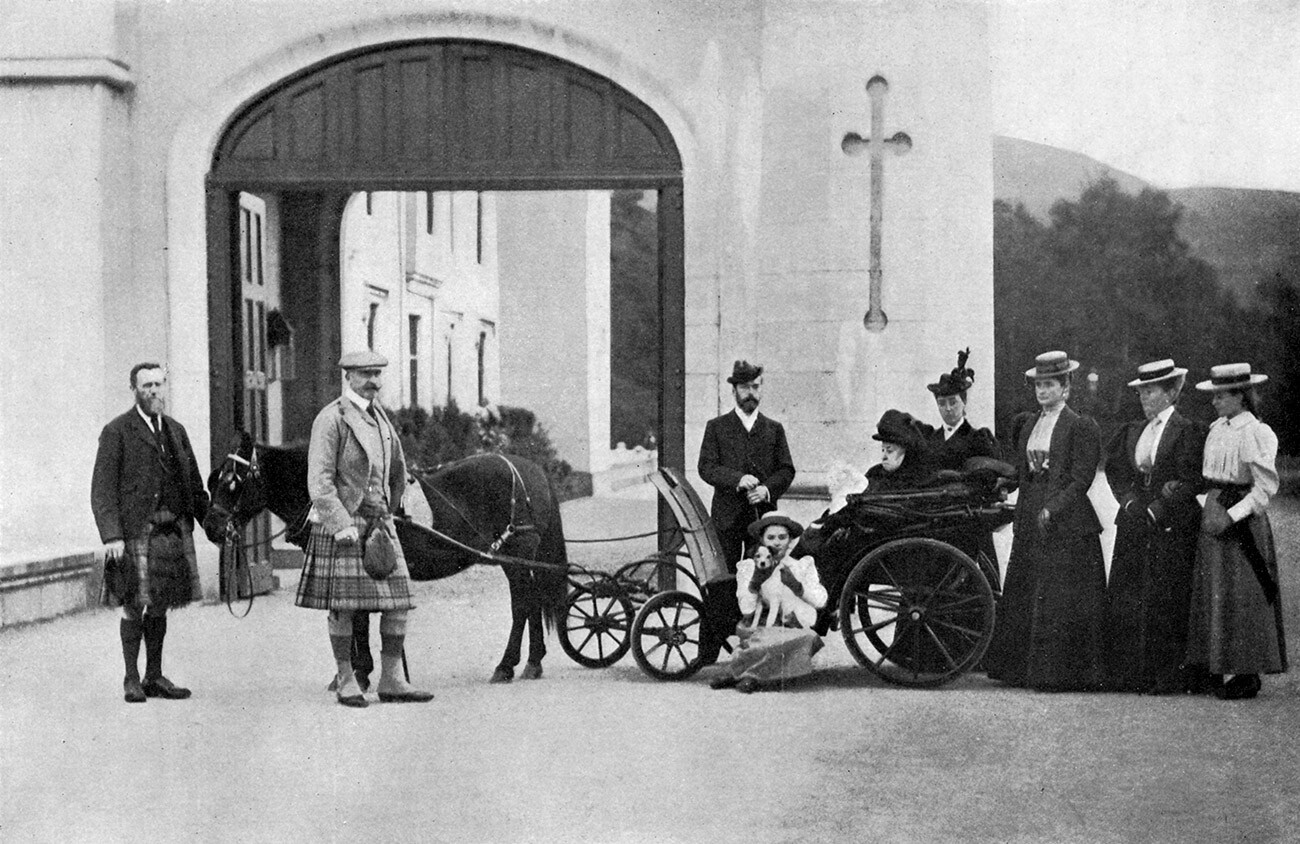 Below they are pictured together. From left to right: Alexandra Feodorovna, Empress of Russia; an infant Grand Duchess Olga; Nicholas II; Queen Victoria of England; and Albert Edward, Prince of Wales. 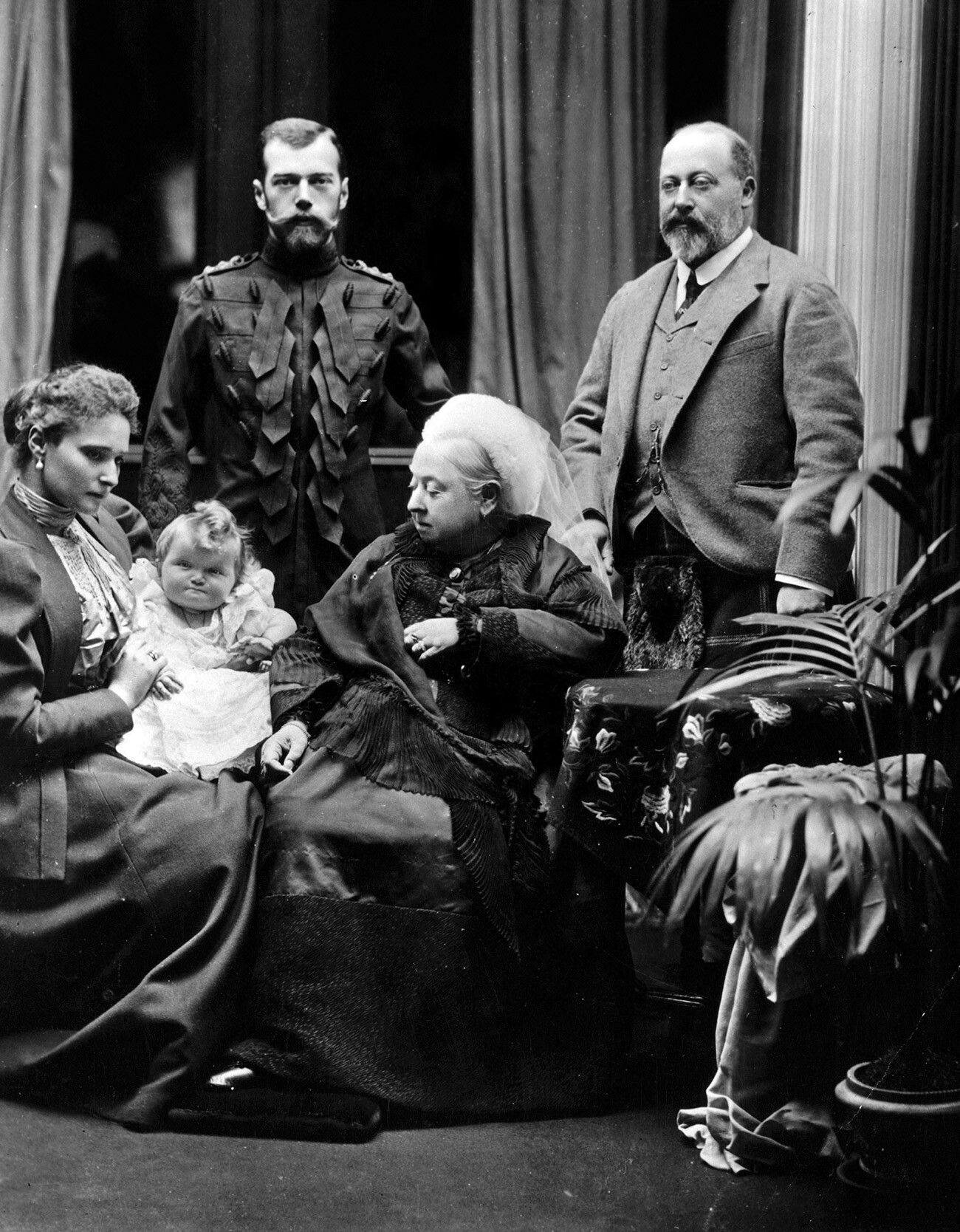 Photo taken in Balmoral Castle in 1896

Interestingly, on his wedding day, Prince Harry wore a very similar replica to the uniform that Nicholas II wore - the frock coat uniform of the Blues and Royals (Royal Horse Guards and 1st Dragoons). 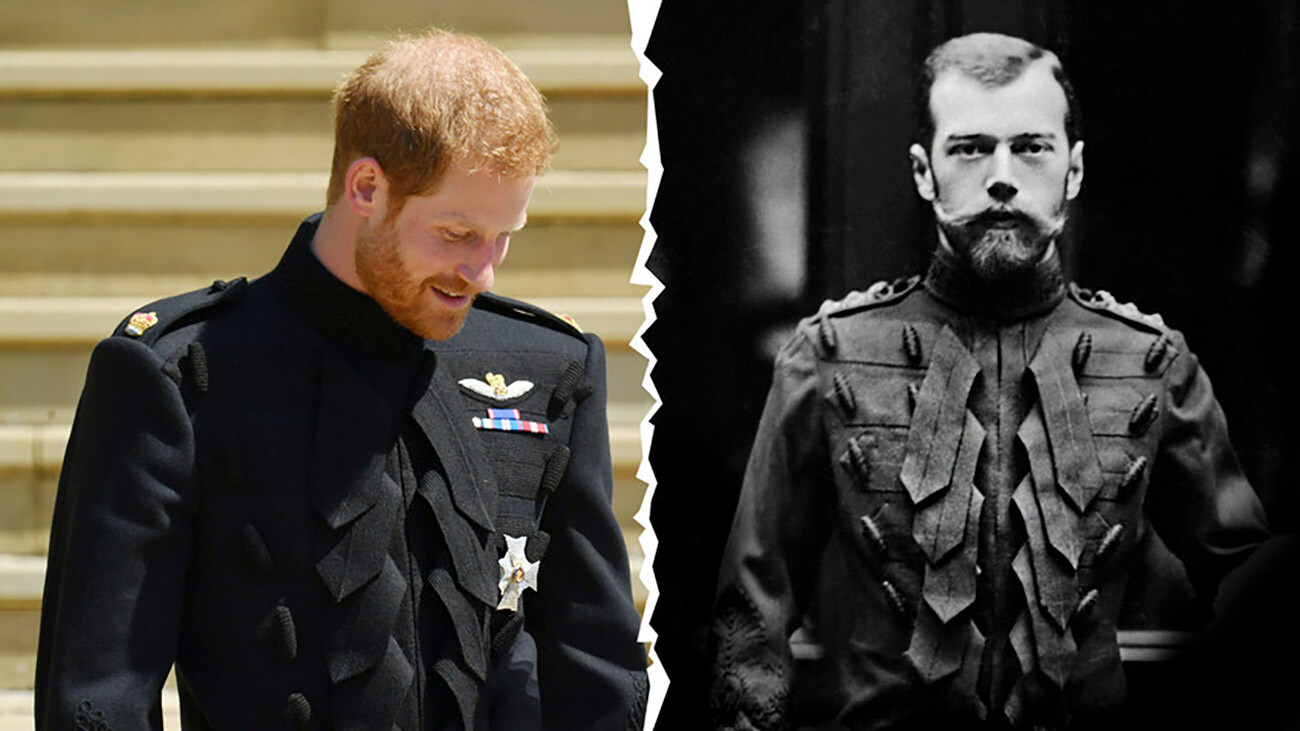 Queen Victoria was nicknamed ‘grandmother of Europe’. She had nine children and multiple grandchildren, among which were not only the Russian Empress and the British King George V (obviously), but also German Emperor Wilhelm II, Sophia of Prussia (Queen consort of the Hellenes), Queen Marie of Romania and Queen consort of Spain Victoria Eugenie of Battenberg. In the picture below, Queen Victoria is captured with just some of her descendants. 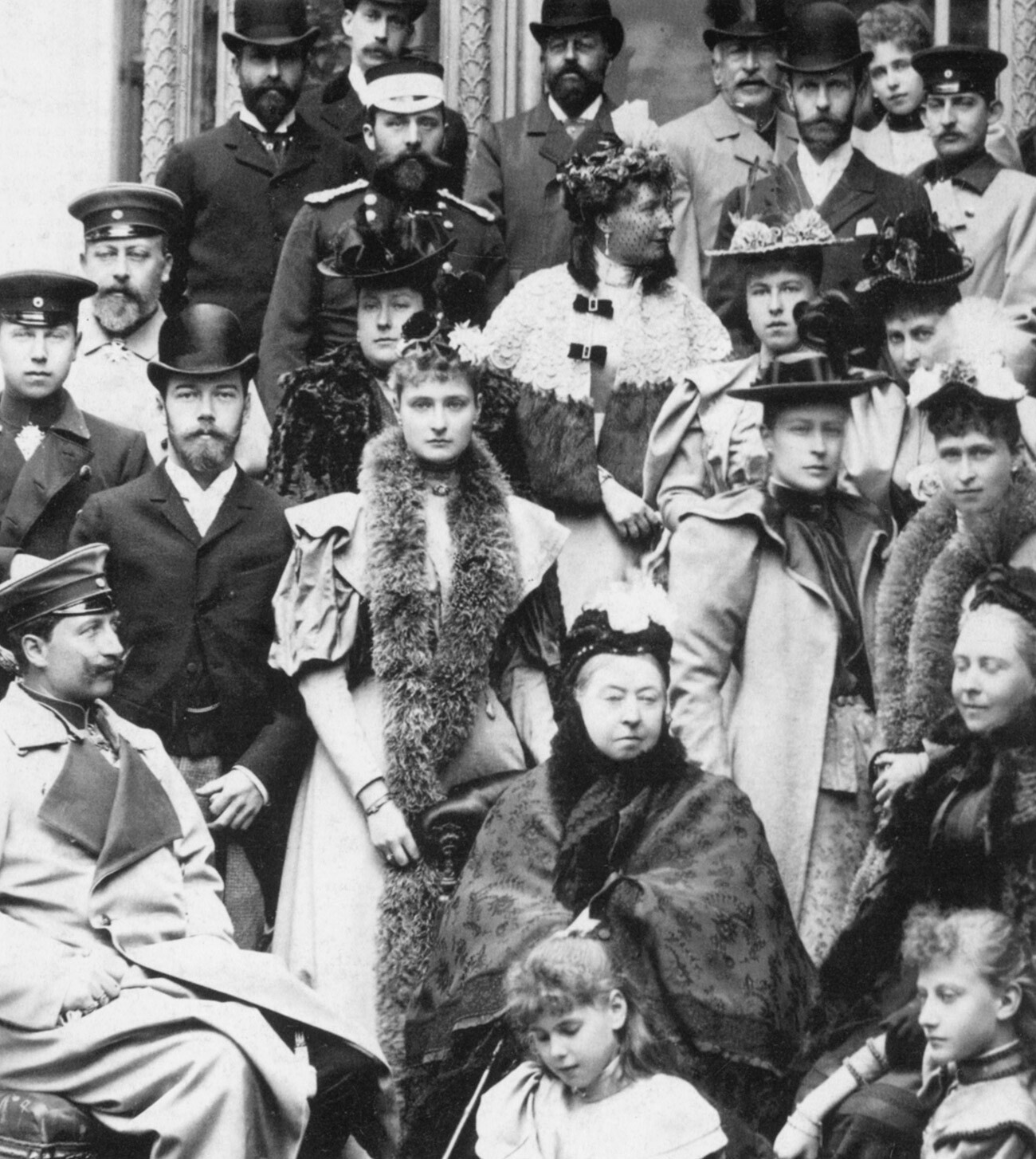 Unfortunately, such close relations spread hemophilia within European royalty. Nicholas II’s only male throne heir, young Prince Alexei, was one of those who suffered from this disease (and the only one who could help him was monk Grigory Rasputin).

The Romanovs and the British Royal family had close ties, they were even friends, having constant mail correspondence and spending time together. In 1909, Nicholas paid another visit to Great Britain. The Russian monarch family came on their yacht and spent time on the Isle of Wight. 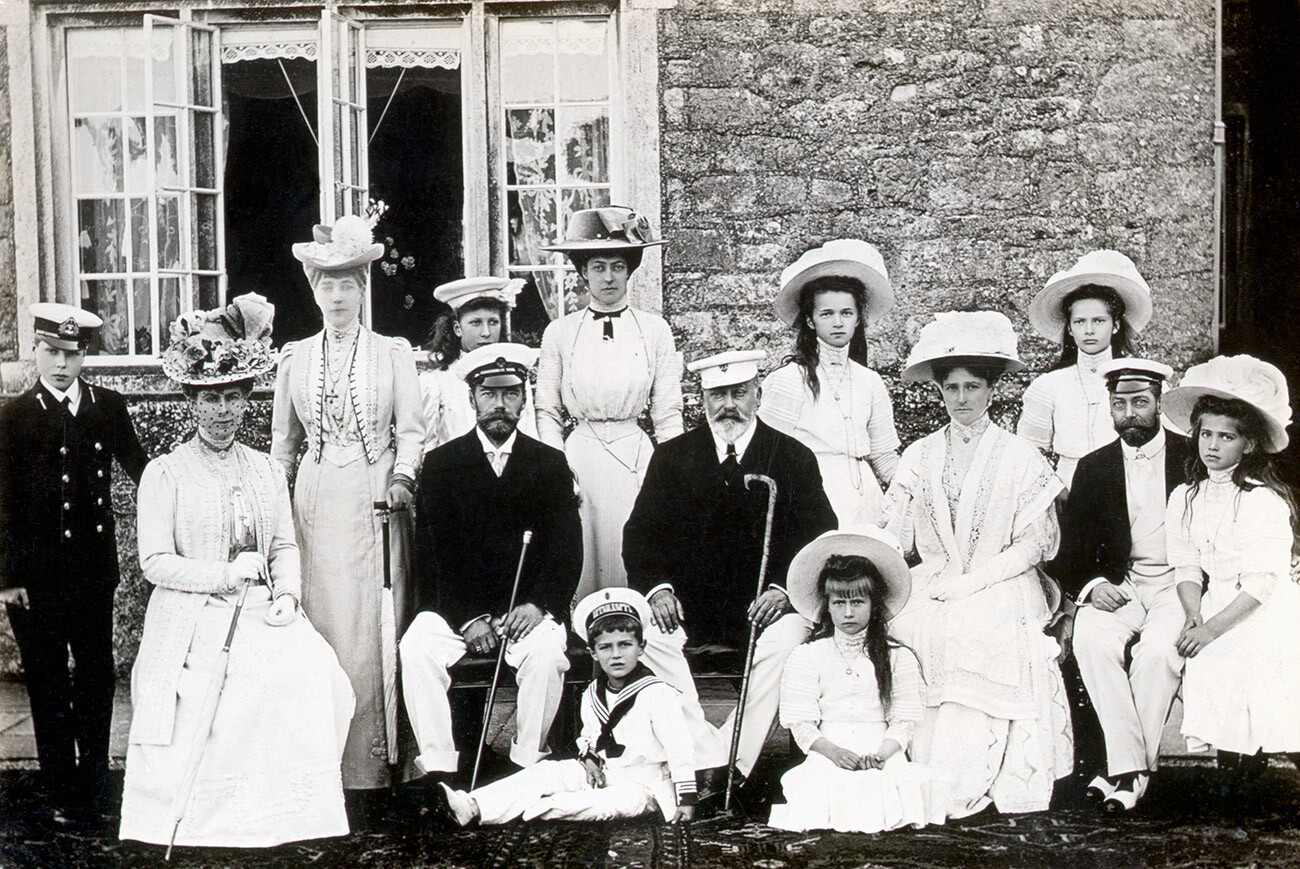 Three generations of two royal families on the Isle of Wight in 1909. 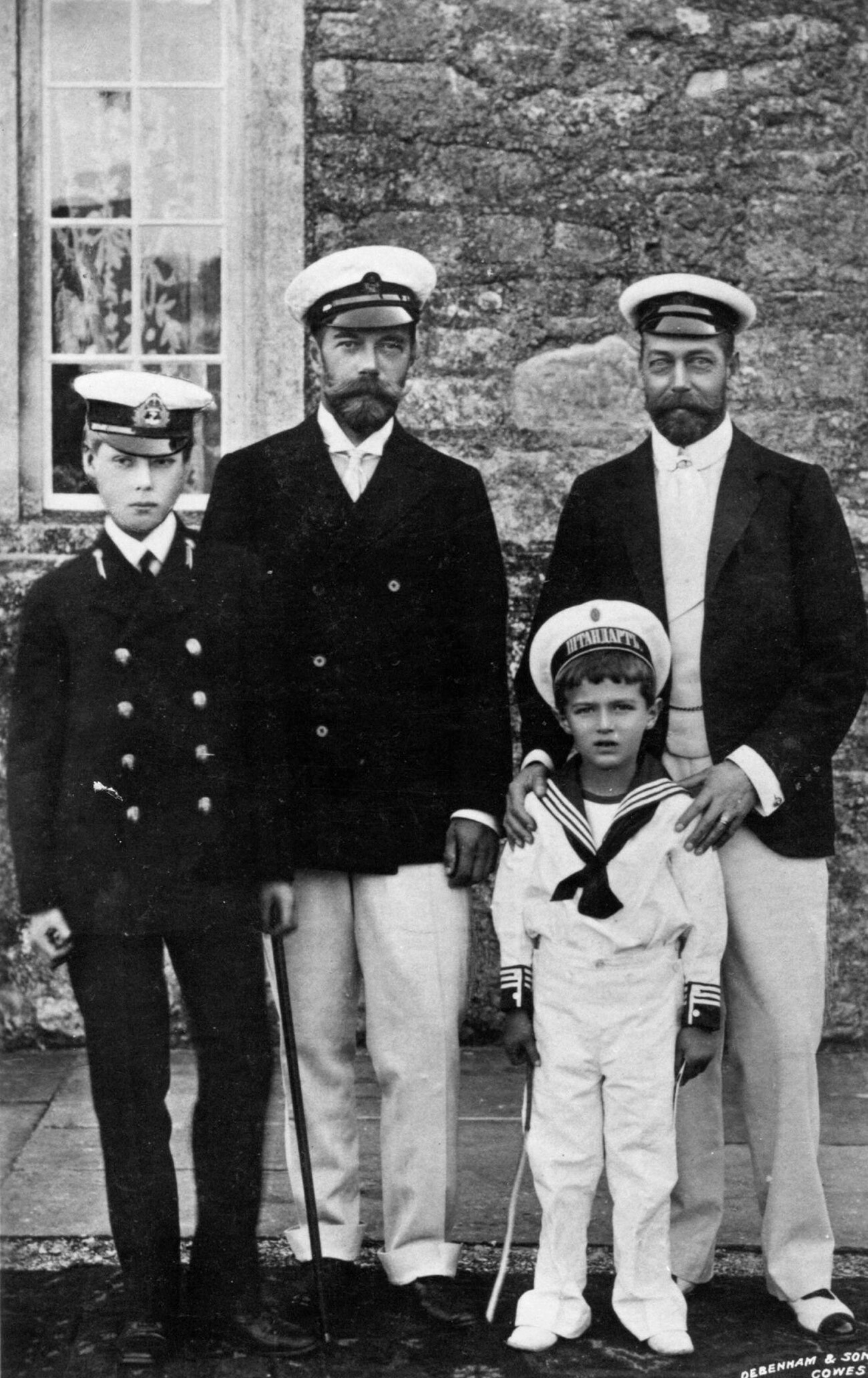 Some of the Romanov and Windsor ties were saved even after the 1917 Revolution in Russia. Russia’s Dowager Empress Marie, who was the wife of Alexander III and mother of Nicholas II, was actually the sister of British King Edward VII’s wife, Alexandra of Denmark.

In April 1919, aboard the British battleship ‘Marlborough’, Marie of Russia was evacuated to Great Britain to her nephew King George V and, from there, she soon moved to her native Denmark, where her other nephew Christian X was king. The fact that George V decided not to save Nicholas II and his family, but let Marie be evacuated, is one of the saddest in their relatives history (and was one of the subplots of the new fifth season of ‘The Crown’ on Netflix).

Below, pictured from left to right are: George V, Queen Mary, Dowager Empress Marie of Russia and Queen Alexandra in front of St Margaret’s Church in Westminster. They all attended the wedding of Marquis of Worcester and Lady Mary Cambridge in 1923. 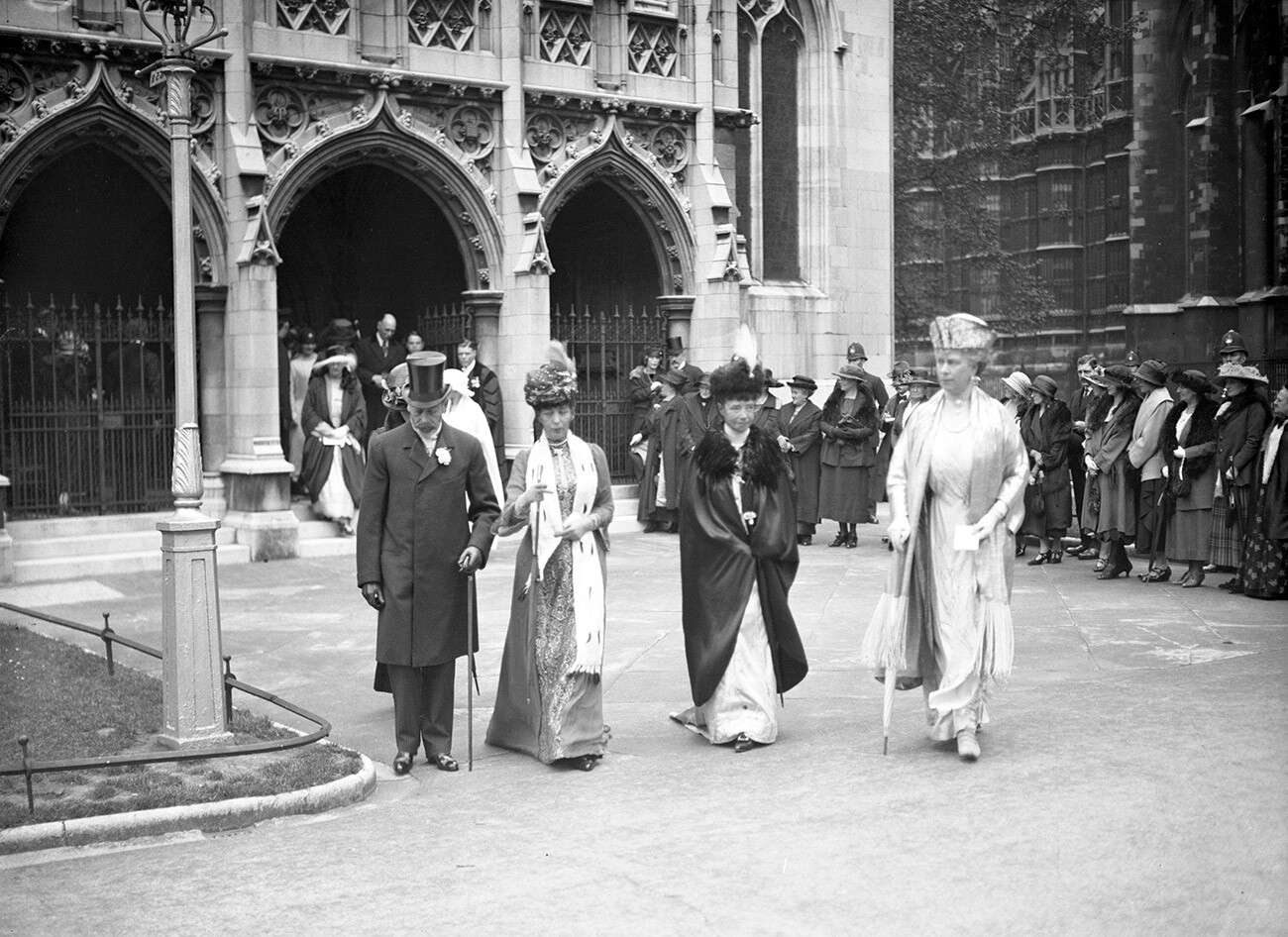