How does the average Russian spend money? 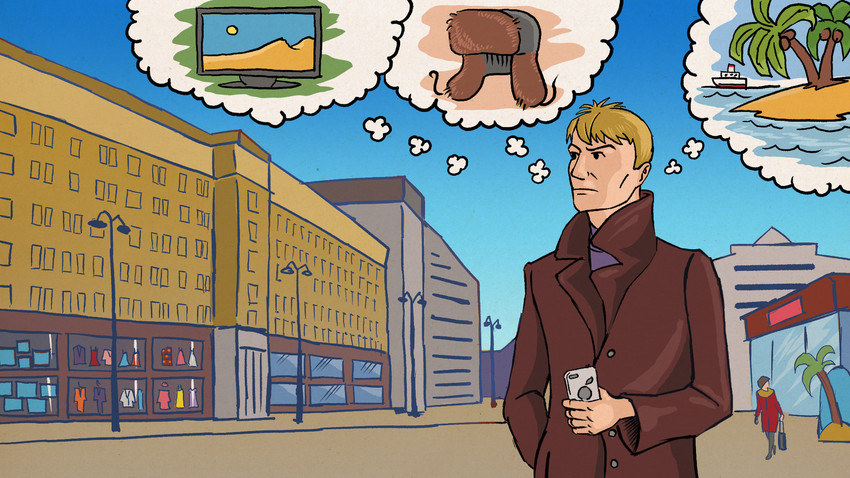 Grigory Avoyan
Inflation has pushed a typical Russian to save money by cutting back on food purchases, but despite his frugality he still manages to spend around 586 rubles ($10.3) every time he goes to the store.

A typical Russian is named Alexander Ivanov; he’s 40-years-old and works in retail, or as a driver. He lives with his wife, two kids and a cat in a city with a population of less than one million. But what can be said about his financial well-being? Thanks to data from various research and surveys* we can answer this question.

The collective portrait of the typical Russian, Alexander, is someone who doesn’t earn much – about 39,000 rubles ($688) a month, which is an average salary in the country.

Like the majority of Russians (46 percent), Alexander and his family admit they’re going through difficult financial times, but nevertheless they’re able to make ends meet by buying only what’s most necessary.

After a long day at work he often stops at a grocery store on his way home. Like most Russians, Sasha prefers to shop in a local supermarket because it offers a large array of items, and most importantly, because of the regular discounts. Inflation has pushed Sasha to save money even on food, but he still manages to spend about 586 rubles ($10.3) every time he goes to the store. Chicken, rice, milk, bread, butter and vegetables are among his frequent purchases. On special occasions he buys alcohol, mainly vodka, which costs at least 200 rubles per 0.5 liter ($3.5).

Today, he buys cat food, pencils and school notebooks for his children – all for about 300 rubles ($5.2). Usually he spends around 3,000 rubles ($52) a month on his kids and a pet. He doesn’t spend money on cigarettes because he doesn’t smoke (like many of his fellow countrymen), and he tries to save money on medical items by buying cheaper domestic-made versions instead of more expensive imported ones. At the same time, he occasionally gives money to those in need:  seeing a charitable request for funds on TV, or in the newspaper, he gives up to 500 rubles ($8.8) to a good cause.

At home, Sasha shares a computer with his children, and must shoo them away to surf the net. He spends a minimum of 400 rubles ($7) a month for an Internet connection.

He rarely goes to fancy restaurants, and most of the time he eats at home. Going to a restaurant is something for a special occasion and means spending around a minimum of 1,000-2,000 rubles ($17-35) to take out his wife and two kids.

Currently, he is thinking about planning his next vacation. Used to holidaying on the Black Sea, he’s generally ready to spend around 40,000 rubles ($705) on a vacation. But now this seems to be bit of a challenge. As many Russians (70 percent), Sasha is not planning to get another loan, and thinks that saving money is the best option right now. If at some point he’ll urgently need extra funds, he’ll ask relatives and friends rather than go to the bank.

Making long-term investments is not really on his mind. Sasha has heard about bitcoin (as 56 percent of Russians) and knows anyone can invest in it, but he considers it to be unprofitable because he still doesn’t know enough about it. The best investment, in his view, is buying real estate.

At the moment Sasha lacks considerable savings, but he’s confident that a sum of around 105,000 rubles ($1,852) would make him quite happy.

Life in Moscow is quite different from the rest of the country and can be genuinely more expensive. Here’s a brief look at the costs that Muscovites and expats have to endure.