Why the lottery was such a cult hit in the USSR 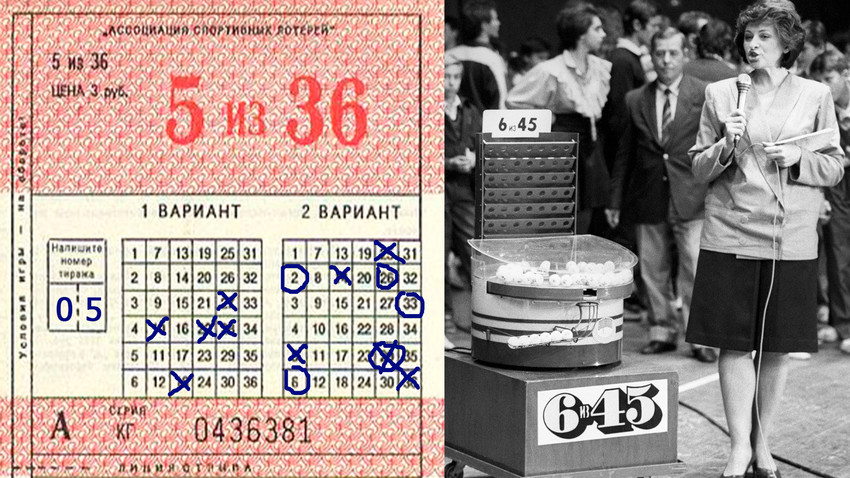 Goznak factory; TASS
Everyone expects to win the lottery, including those who forget to buy a ticket, they say. For millions of people in the Soviet Union, playing the lottery was like brushing their teeth first thing in the morning. The lottery was a sport in which not being a champion didn’t mean one had to give up the sport completely. Participation was as important as winning, as before the lucky ticket won the jackpot, someone had to buy it, of course.

In October 1970, the first ‘Sportloto’ lottery draw was nationally televised, with Soviets checking their ticket numbers heart in mouth. The air crackled with anticipation, anxiety and excitement. Initially, only Muscovites had a chance to take part in the lottery.

Yet a whopping 1.5 million tickets were sold within a week. The popularity of the game then spread like wildfire across the rest of the USSR. Baku (capital of Azerbaijan SSR) became the second city where lottery tickets began to be sold, followed by Yerevan (capital of Armenian SSR), Odessa (port city on the Black sea), Kiev (сapital of Ukranian SSR) and other large cities. The proceeds from the lottery provided up to 80 percent of the revenues of the state sports budget. 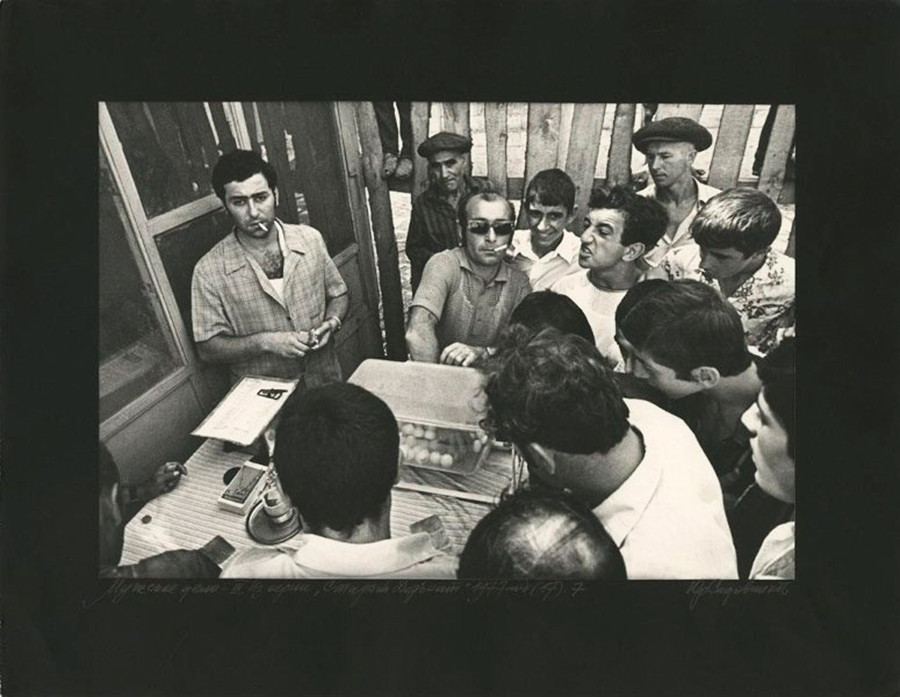 The popularity of the game spread like wildfire across the USSR.

A few years later, millions of people from all corners of the country (roughly, up to three quarters of the population) became involved in the lottery bonanza. Leonid Gaidai's comedy ‘Sportloto-82’ became the highest-grossing movie in the USSR in the corresponding year. In the 1980s, the lottery sales network in the Soviet Union was the largest in the world.

When George Orwell described the lottery phenomena in his ‘1984’ dystopian classic, it seemed like he had witnessed the Soviet version of the game with his own eyes. “The Lottery, with its weekly pay-out of enormous prizes, was the one public event to which the proles paid serious attention. It was their delight, their folly, their anodyne, their intellectual stimulant,” he wrote.

But, in the Soviet Union, the game of luck wasn’t meaningless. For the majority of citizens, winning the lottery was their only chance to realize financial freedom. 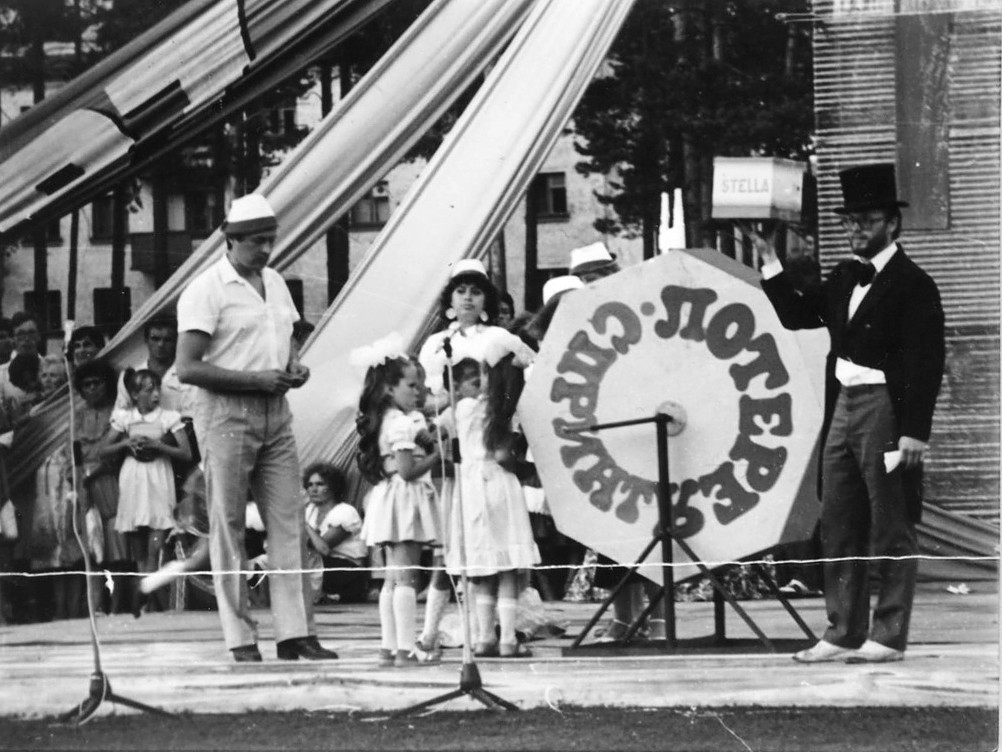 Up to three quarters of the population became involved in the lottery bonanza.

An archive of Yegor Chernyshev

‘Sportloto’ was the brainchild of Viktor Ivonin, deputy chairman of the Soviet sports committee. The biggest challenge was to brush off potential claims that the very idea behind the money-making game was actually in sync with the socialist nature of the Soviet Union. The authorities found a compromise. It was decided that half of the proceeds from all ticket sales would go to the development of sports in the country.

The first lottery in 1970 was called ‘6 out of 49’. The lucky winner had to pick from three to six winning numbers. Ludmila Morozova, a 35-year-old engineer from Moscow, hit the jackpot. She won 5,000 rubles. 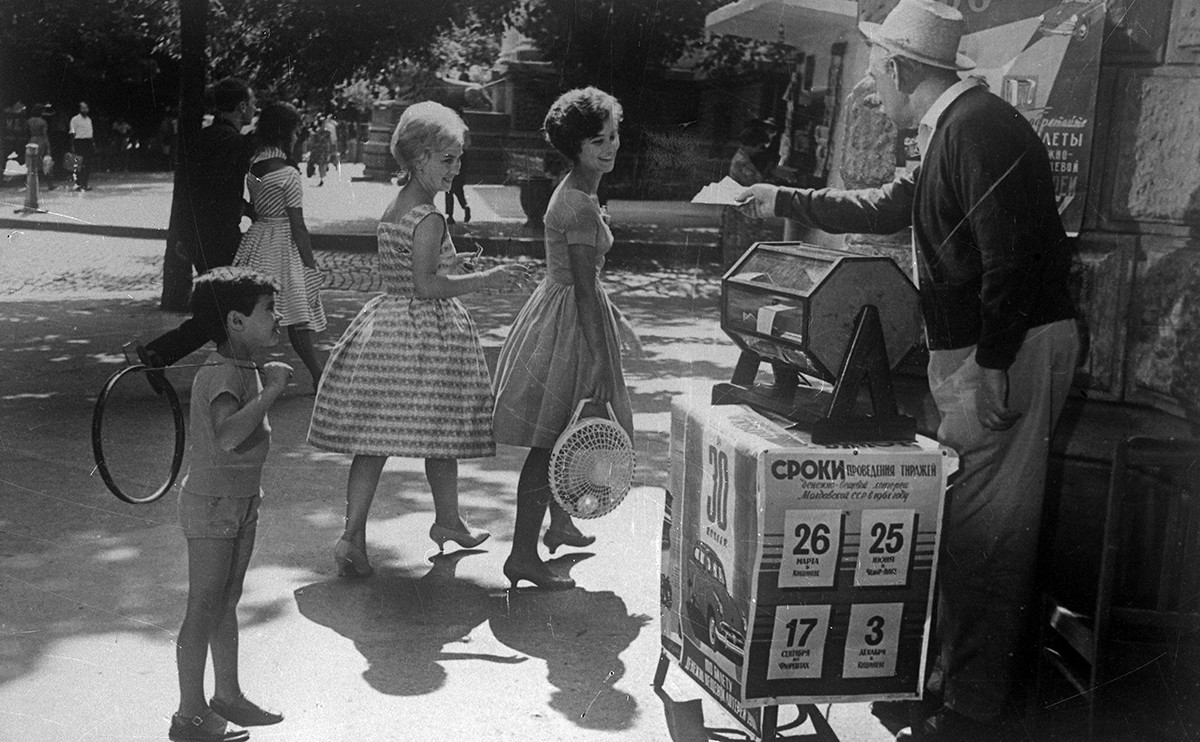 Still image from the movie 'Man Follows the Sun'.

As with all things good, it happened quite by chance. The woman was heading home from work, tired and hungry, when she stopped at a kiosk near the metro. Ludmila believed she had nothing to lose (indeed, one ticket only cost 30 kopecks), so she took two: one for herself, the other for her 11-year-old daughter. The girl decided to give it a go, with all due seriousness. A fan of the Russian bingo game set, she grabbed a tissue bag filled with beautiful wooden balls with cut out numbers imprinted on them, shook the bag with youthful enthusiasm and pulled out six balls blindly. Those turned out to be lucky numbers! As a reward for her prophetic efforts, the girl modestly asked her mom to buy her a bicycle.

At a time when an average monthly salary was only between 90 to 115 rubles, 5,000 was a huge sum. One could buy a huge Yugoslavia-made furniture set for a living room, a carpet featuring swans to pin to the wall, a piano and sleeper chair, or simply put some money aside for a rainy day.

Winning the lottery gave anyone a chance to live better. In 1972, the mother of future leader Vladimir Putin, won a Zaporozhets car. “In the canteen, instead of change, she was given, I think, a couple of tickets or just one ticket. It cost 30 kopecks ... We lived in one room, in a communal apartment, on the top, fifth floor. We didn’t even have a shower. And [living] in such conditions my mother won this car,” the Russian president recalled in 2018. “I remember perfectly well a family meeting, where mom and dad sat at the table and thought what to do with it. And then suddenly my mother said: We’ll take the car for our son to drive. Can you imagine what this meant to my parents?"

READ MORE: Top 5 things every Soviet man had on his wishlist

Although the highest possible winnings in Sportloto were capped at 5,000 rubles, people won larger sums, too. For instance, a locksmith from Tallinn (capital of Estonian SSR) won nearly 35 thousand rubles. To boost their winning, lottery enthusiasts allegedly bought not one but dozens of tickets, up to a thousand. 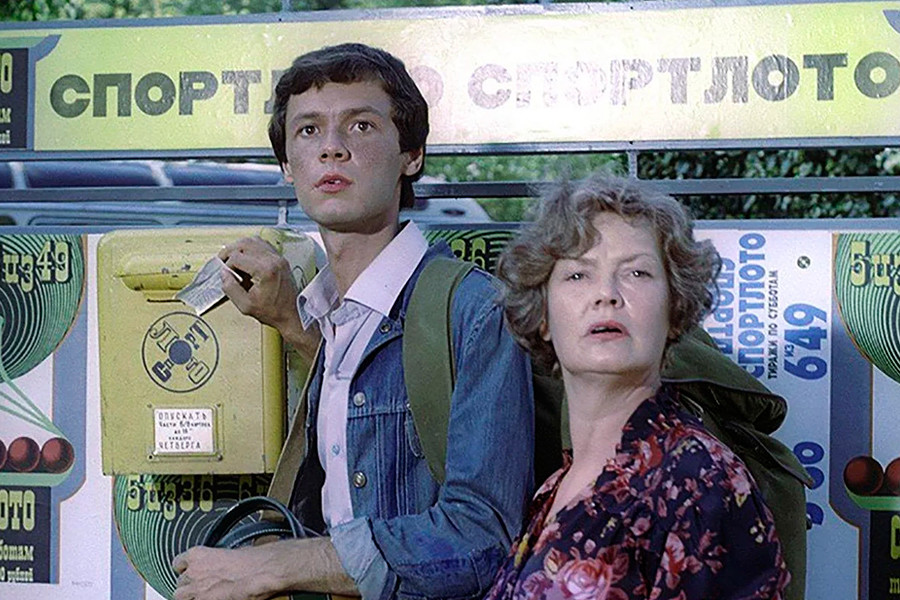 ‘Sportloto-82’ became the highest-grossing movie in the USSR in 1982.

In 1978, the winning limit for one ticket was raised to 10,000 rubles and people began to take advantage. And yet, many played the lottery unaware of how difficult it is to win. 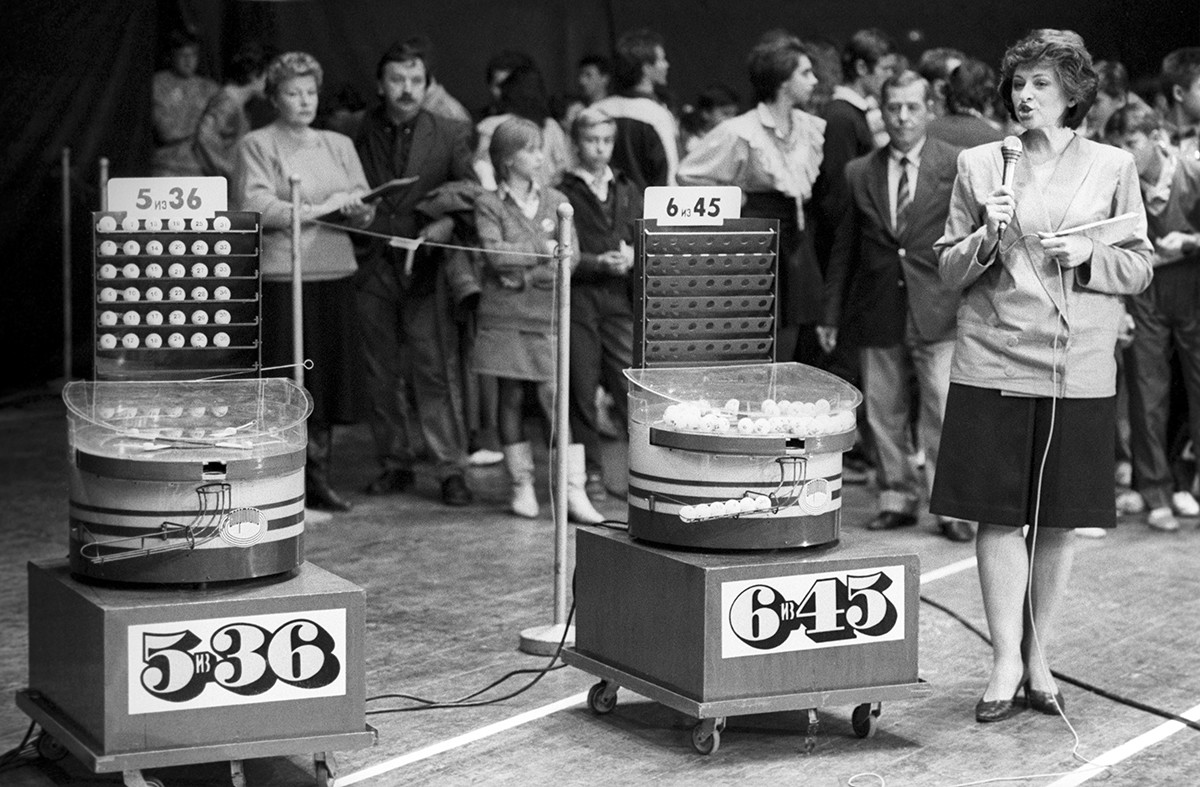 For the majority of citizens, winning the lottery was their only chance to realize financial freedom.

In 1985, Sergei Mikhailov, an electrician from Dushanbe (capital of Tajik SSR), claimed the largest lottery prize in Soviet history - 60,680 rubles (he would have had to work for four decades to earn this amount of money). A Soviet newspaper even ran an article about the 38-year-old winner. Sportloto conducted draws every 10 days and Sergei did not miss a single game. He filled in each and every ticket he bought with the same numbers: 1; 5; 10; 21; 25. However, he seldom won more than ten rubles. According to the newspaper, the lucky man donated 1,000 rubles to the Soviet Peace Fund. 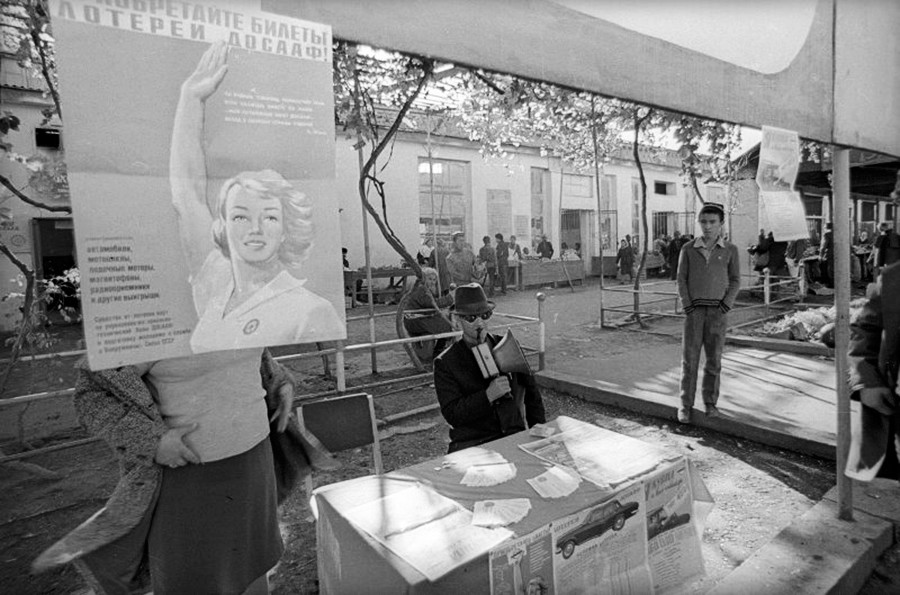 Many played the lottery unaware of how difficult it is to win.

In 1976, the so-called ‘Saturday Sportloto’ was introduced using the ‘5 out of 36’ formula. It was based on the game of Keno, which originated in ancient China. Legend has it that, with the funds raised from the ancient lottery, the emperor financed the construction of the Great Wall of China. In the USSR, the lottery provided more than a quarter of the budget for the 1980 Summer Olympics in Moscow - about 532 million rubles. Not a bad result of good luck.

READ MORE: 10 facts about the ONLY USSR Olympic Games in history (PHOTOS)