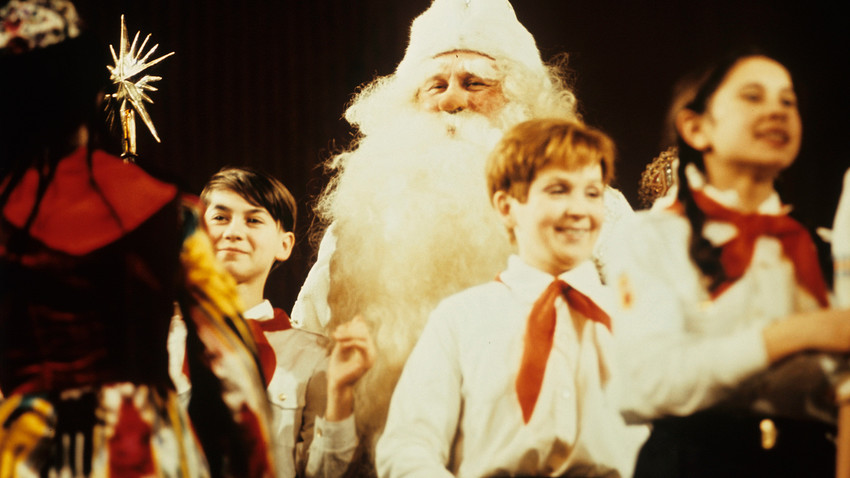 Alexander Makarov/Sputnik
Ded Moroz (aka Grandfather Frost, Russia’s version of Santa Claus) had god-like status in the Soviet Union. When it came to Christmas gift ideas, most children thought the sky was the limit for Soviet Ded Moroz. While some kids were not afraid to ask for anything, others simply expected Grandfather Frost to play it by ear and see what happens.

In the early 1920s, the father of the Soviet Union, Vladimir Lenin, regularly joined kids for Christmas celebrations. Still, there were signs that the wind of change was blowing. 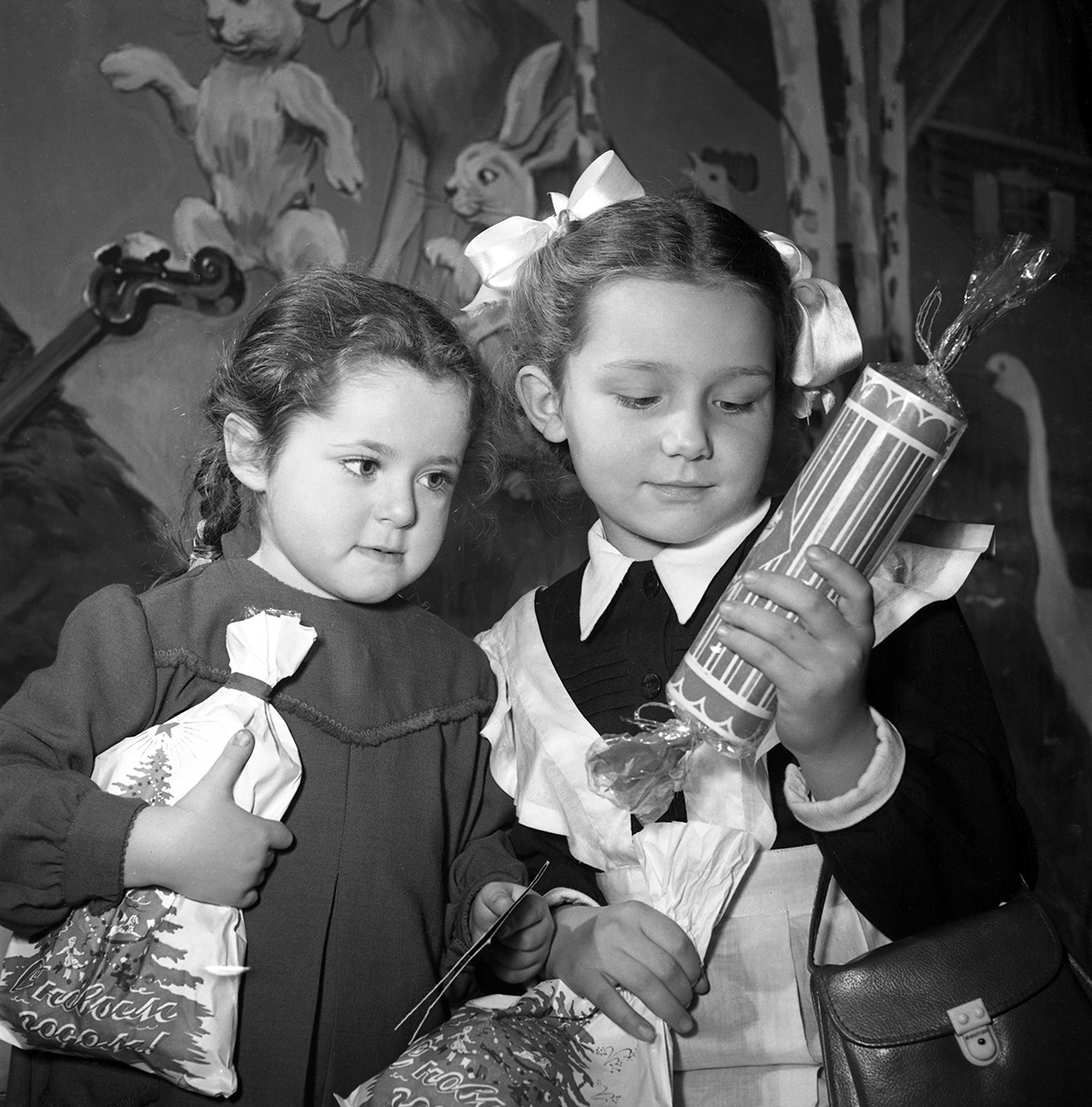 When it came to Christmas gift ideas, most children thought the sky was the limit for Soviet Ded Moroz.

At first, ardent supporters of communism attempted to replace Christmas with a Komsomol (Soviet youth organization) related holiday. In the late 1920s, when atheism became part of the state-run ideology, the vast majority of the so-called traditional holidays were canceled in the USSR, deemed as remnants of the bourgeois tsarist era.

Christmas, with its strong religious undertone, was banned, along with the trees that come with it. “If you cut down fir trees, your days will be gloomy and gray. If you join the celebration of Christmas, you are not a pioneer” – Soviet schools readily adopted the catchphrase as their new slogans.

A blanket ban didn’t solve the “problem”, however, and many people continued to secretly celebrate their favorite holidays despite the ban. 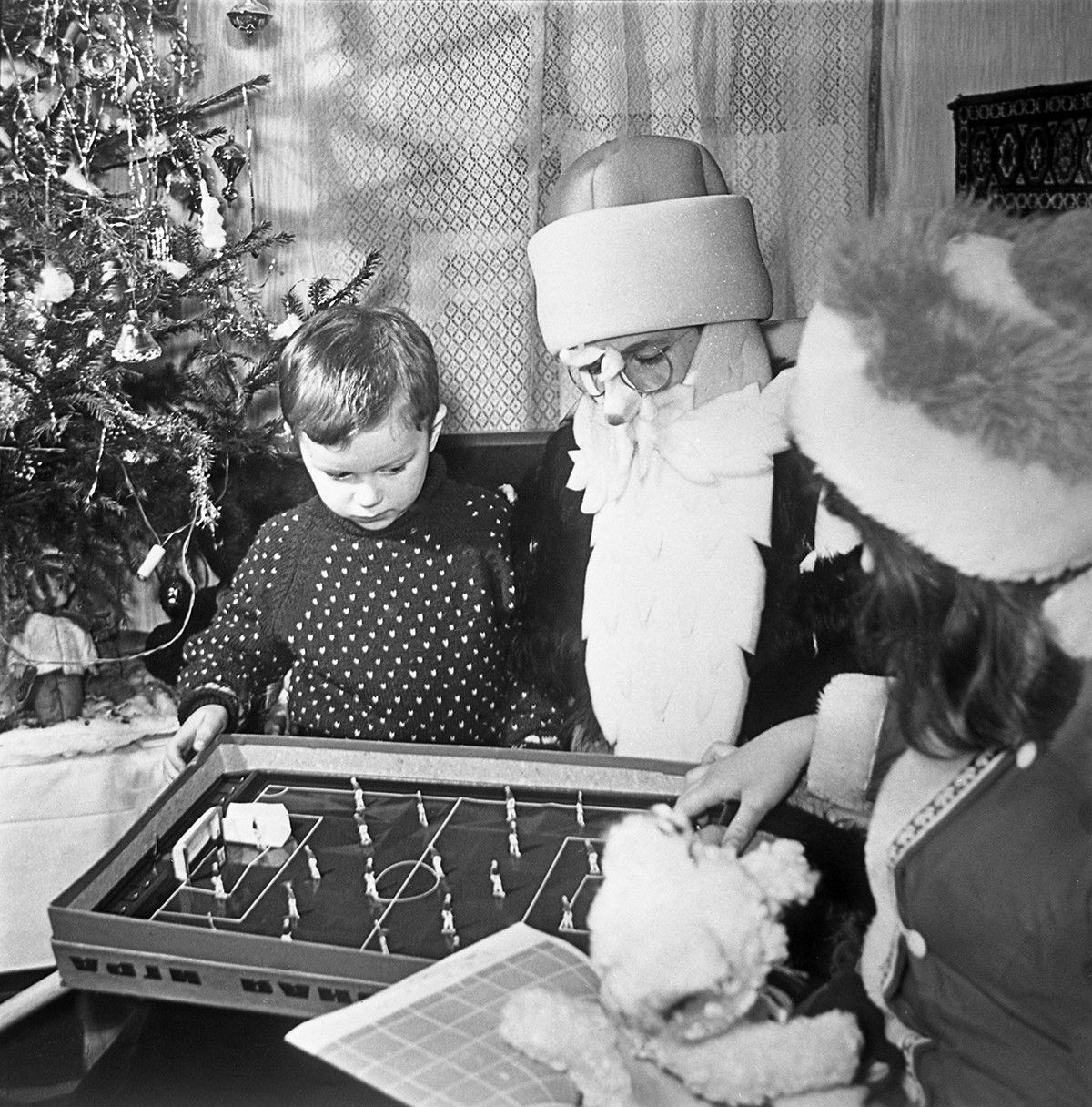 Father Frost will spend time talking with the children.

“Although we had no Christmas tree, I still believed in Ded Moroz,” famous Soviet actor Yuri Nikulin recalled in his memoirs. “On New Year’s Eve, I always left one of my shoes at the door, in the hope that Grandfather Frost would tuck a toy or something tasty in it. I would sometimes leave both of my shoes in the entry hall for several days for Ded Moroz to take advantage.”

One morning Nikulin, who turned seven in 1928, spotted a piece of rye bread sprinkled with sugar and wrapped in a sheet of paper. “Really? Ded Moroz has gone crazy or what?” the boy thought, unaware that his parents had simply ran out of money and couldn’t even buy a cheap toy for their beloved son. The next day, to Nikulin’s amazement and relief, he found a gingerbread cookie carved in the shape of a fish in his shoe. He was on cloud nine.

In 1935, Stalin decided to return the festive fir tree back to children. It was back on track, hailed as a symbol of happiness and part of Soviet socialist reality. The tradition of celebrating the arrival of the new year became vital to the majority of people. 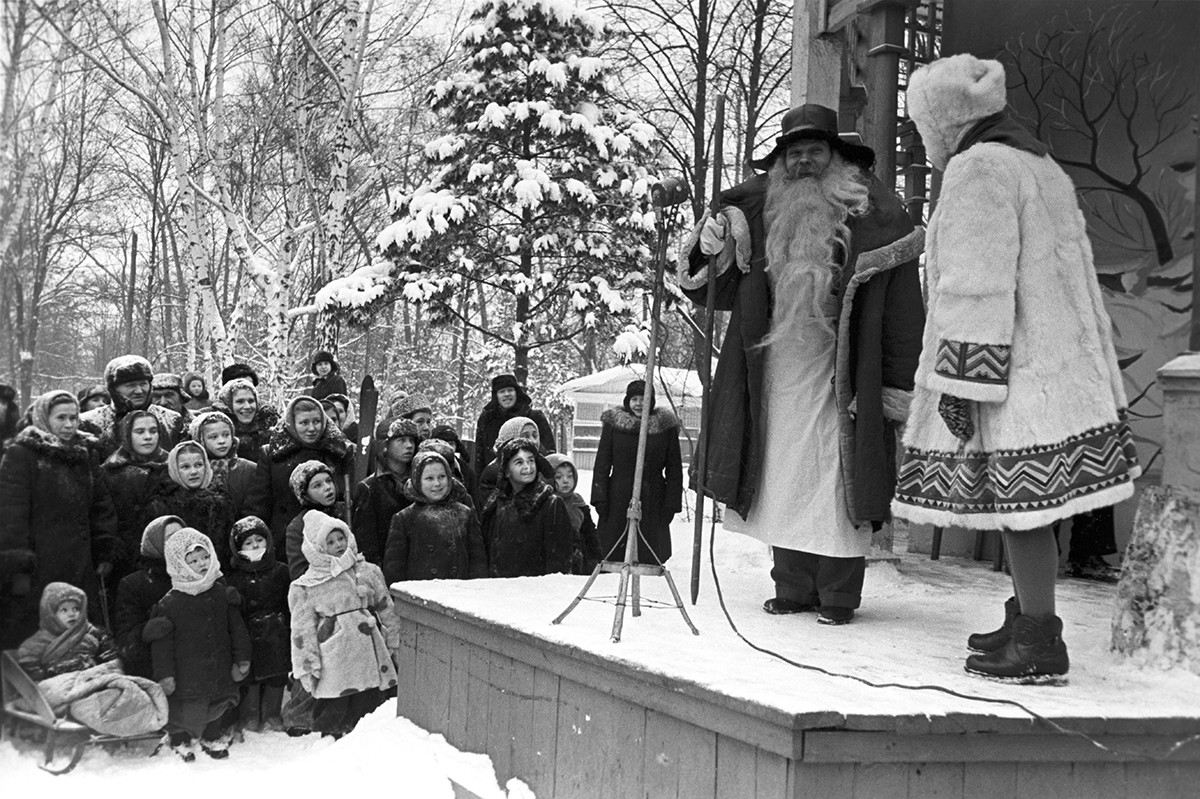 Father Frost or Ded Moroz is the Russian equivalent of Santa Claus.

Nothing says Christmas like sweet and juicy tangerines. First imported to Russia from Germany back in the 1870s, they became the most adorable symbols of the lucky start of a new year nearly one hundred years later. At the beginning of the 20th century, some Moscow families made a tradition of putting tangerines on their Christmas trees. The fruits were often hand-wrapped in silver foil like walnuts.

READ MORE: How New Year was celebrated in the USSR (PHOTOS)

Between the 1920s and the 1960s, tangerines were hard to get in the USSR. Only those who lived in the south of the country, on the Black Sea coast of the Caucasus (in the Georgian SSR and Abkhazia, then part of Georgia) had access to such exotic fruit. 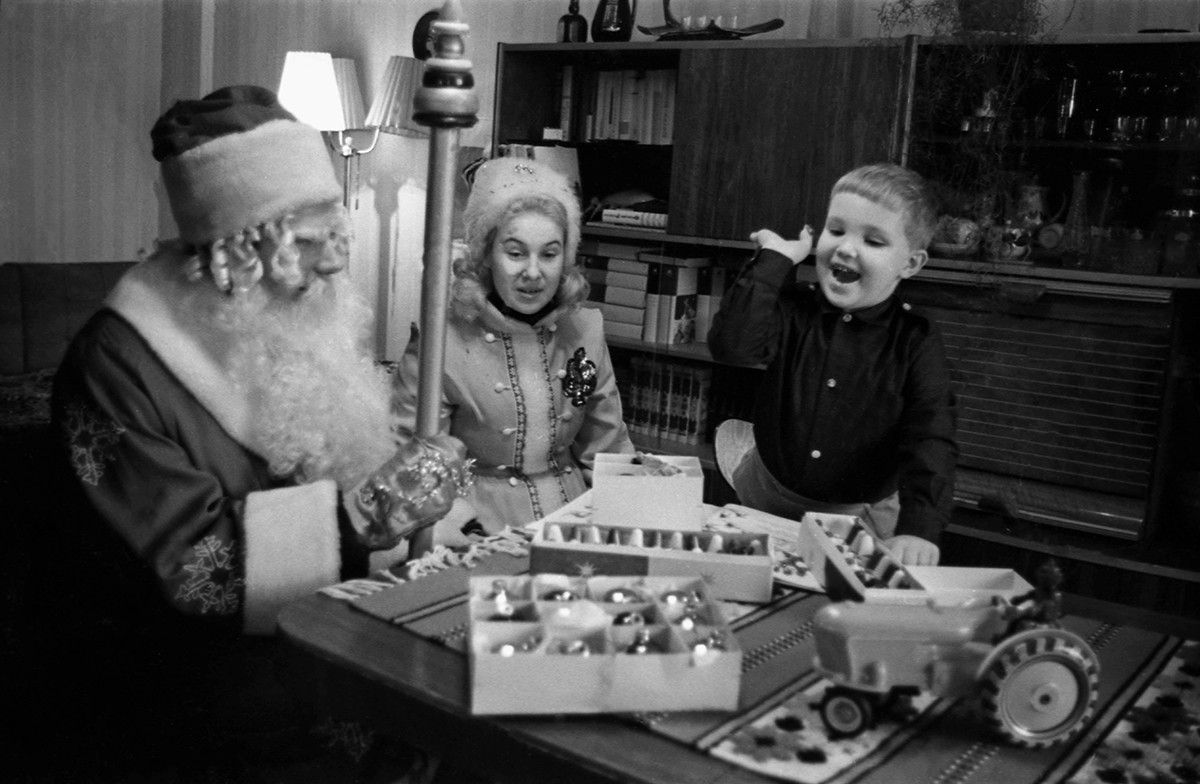 Some children still believe Father Frost, or Ded Moroz, can help them save the world.

The sun began to shine on the other side of the fence only in the early 1960s, when tangerines finally became available in almost all corners of the Soviet Union. A groundbreaking deal was reached between Morocco and the USSR, after which tangerines were imported from the North African country in exchange for Soviet tractors, harvesters and nitrogen fertilizers. Tangerines cost only 1 ruble 30 kopecks per kilo (the equivalent of $1.17). The average monthly salary back then was 80 rubles.

“I dreamed a dream of owning a box of tangerines,” Boris, 71, says. “Back in the mid-1950s, the smell of tangerines in Moscow was as rare as the smell of freedom. I wrote several letters to Ded Moroz, asking him to bring me a bunch of tangerines. I promised to behave nicely and get top grades in school in exchange.”

In the 1960s, during Krushchev’s years of thaw, the atmosphere must have been so different that some children chose not to bother Ded Moroz with mundane present requests like train sets for boys or sewing machines for girls. 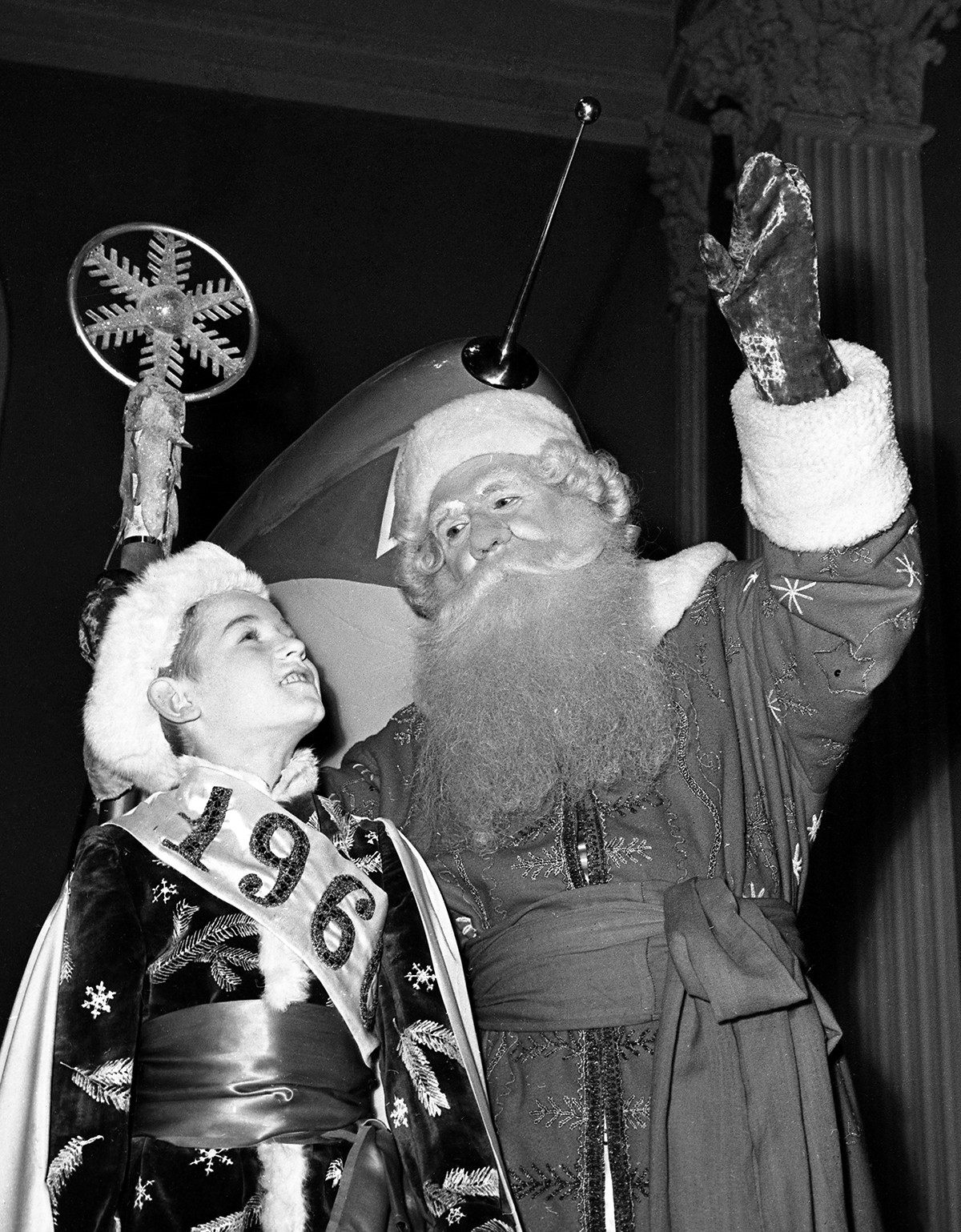 In their letters to Grandfather Frost, some children described their fears and dreams.

In their letters to Grandfather Frost, the new kids on the block described their ultimate dreams. “I wanted to learn to swim,” Natalia, 69, recalls. “The problem was, I started to understand the reality of Ded Moroz. I didn’t lose my belief in him entirely, but began to repeatedly ask myself whether he was real. I remember how I decided to find out the truth by asking for something virtually impossible. I said I wanted to learn to swim. In fact, that was the year I finally stopped believing in Father Frost, as I never eventually learned to swim. Meanwhile, my classmate and best friend Arseny once told me that he wrote a letter to Ded Moroz asking him for safe health for his mother and grandmother. He said he wanted to become a doctor. Many years later, his dream came true,” Natalia notes.

Iconic Soviet cosmonaut Yuri Gagarin entered the history books not only as the first man in space, but also as the man with a kilowatt smile who changed the course of history. His 108-minute orbital flight on April 12, 1961, launched an era of space exploration. His magnetism and determination to reach for more made him a role model for generations of Soviet men. 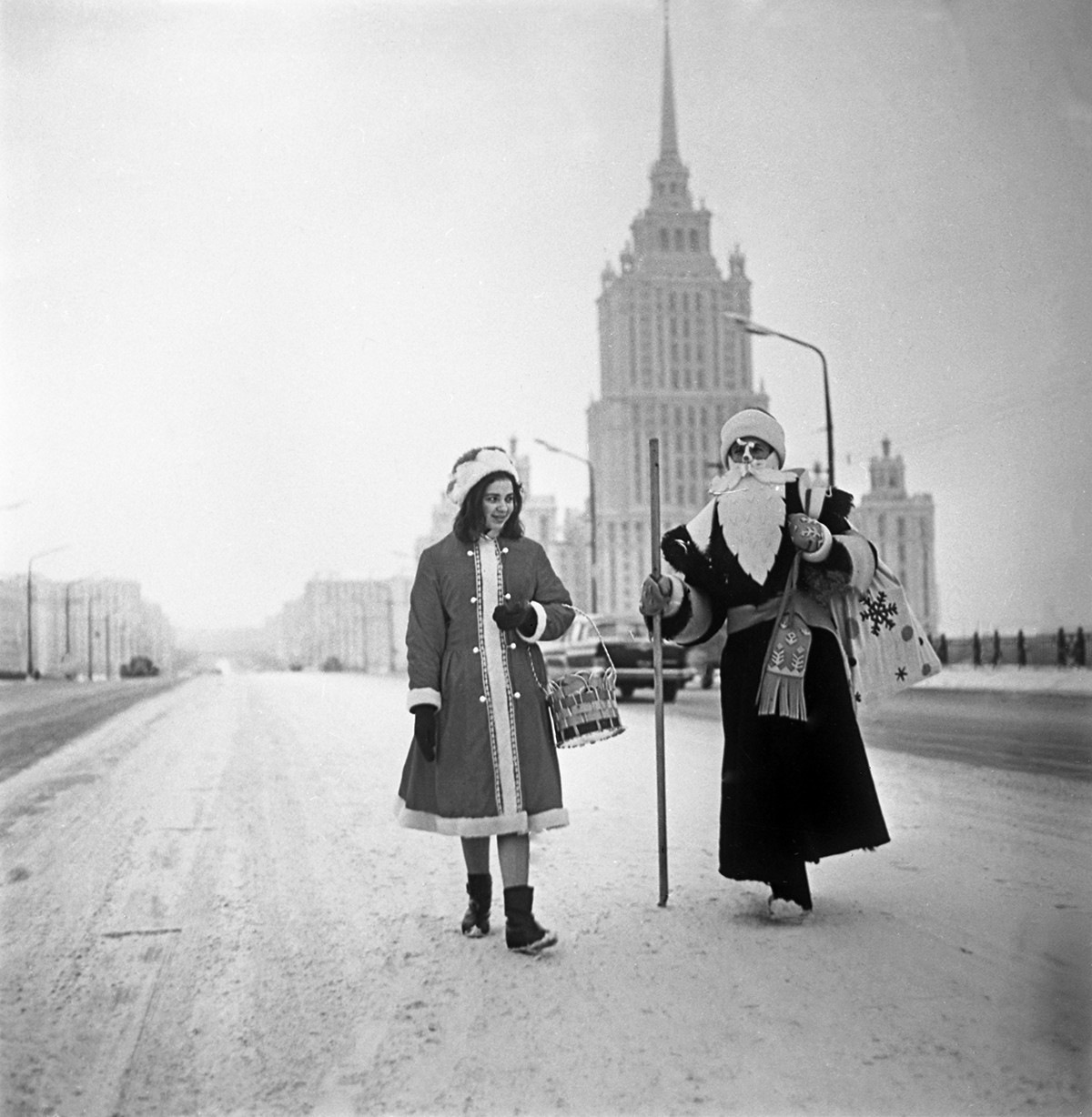 Some children modestly left the choosing up to the bearded man in the red suit and his beautiful snow maiden assistant Snegurochka.

Dmitry was 7 when Gagarin blasted into space aboard Vostok One. “I was impressed to the point where I lost appetite and fell ill with a mysterious illness. I had missed a couple of days of school because all I could think of was Yuri Gagarin! I kept asking my parents, HOW did he do it? I wrote my letter to Ded Moroz eight months ahead of schedule, I just couldn’t wait for the new year to come! I didn’t beat around the bush, I think I even forgot to say hello, asking Grandfather Frost to help me fly to the stars as soon as possible.” Dmitry says that all boys in his neighborhood had been obsessed with space travel for several years, hoping that one day they would fly to the moon and back.

Nina turned 6 when she wrote her debut letter to Grandfather Frost in 1979. She decided to open up about her worries and fears, the biggest being the fear of war between the USSR and the United States. Nina’s father Victor, a talented illustrator, had painted his daughter a grim picture of the Cuban Missile Crisis, which had brought Moscow and Washington almost to the point of no return, in other words, to the brink of nuclear war in 1962. 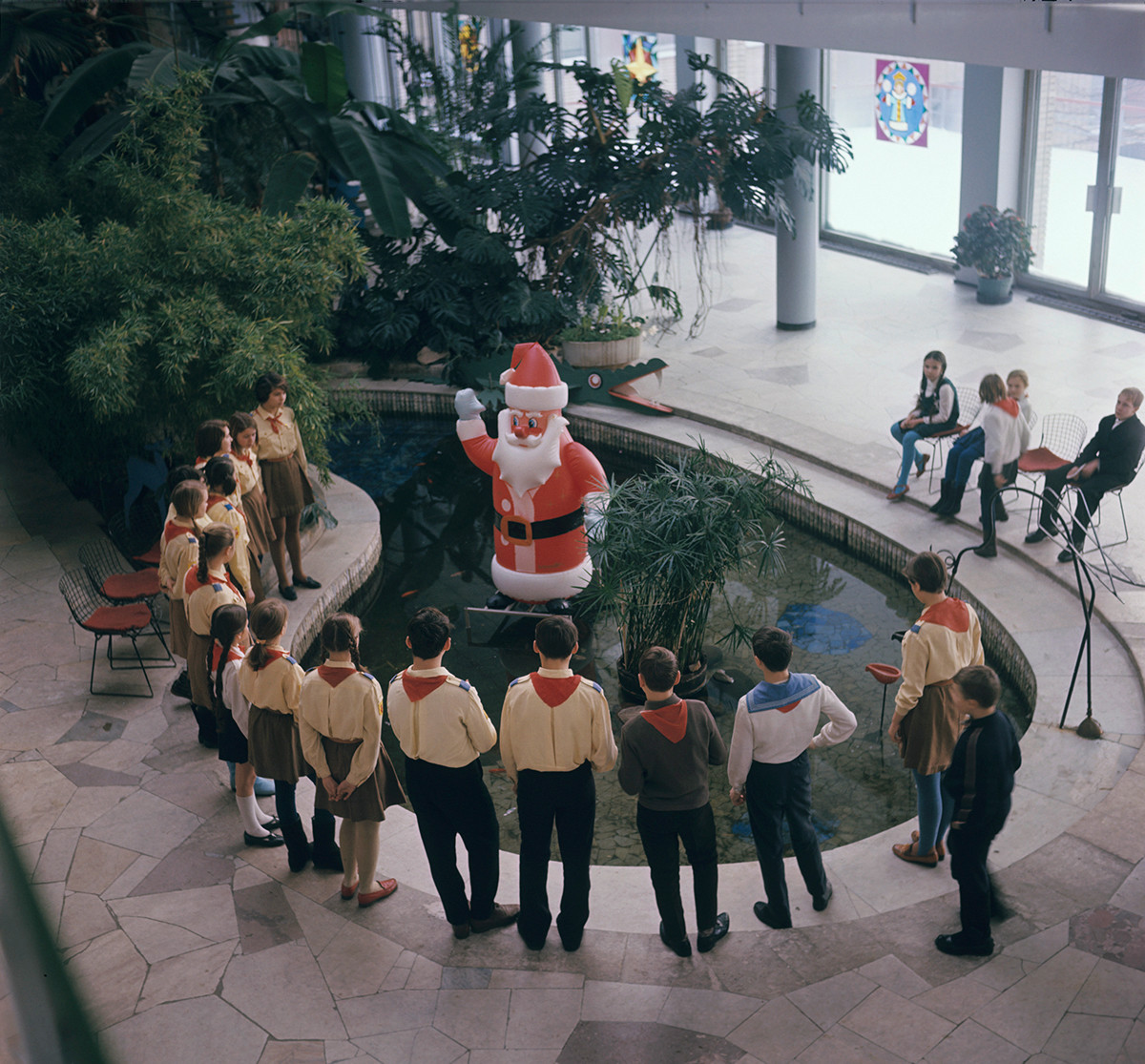 Many kids relied on Soviet Santa to fulfill their wishes.

Nina let her thoughts stray to the worst of unprecedented fears, imagining the whole world convulsed in a war that would end with nuclear destruction. “In my short letter to Grandfather Frost, I asked him to save the world,” Nina, 47, recalled. “I pointed out that in my humble opinion, his beautiful snow maiden assistant Snegurochka should use all her charms to reconcile the two sides. And I wasn’t alone in those fears. Some of my classmates later told me that they often pictured a nuclear war in their worst nightmares.”