10 Russian female pilots who rule the skies - and Instagram (PHOTOS) 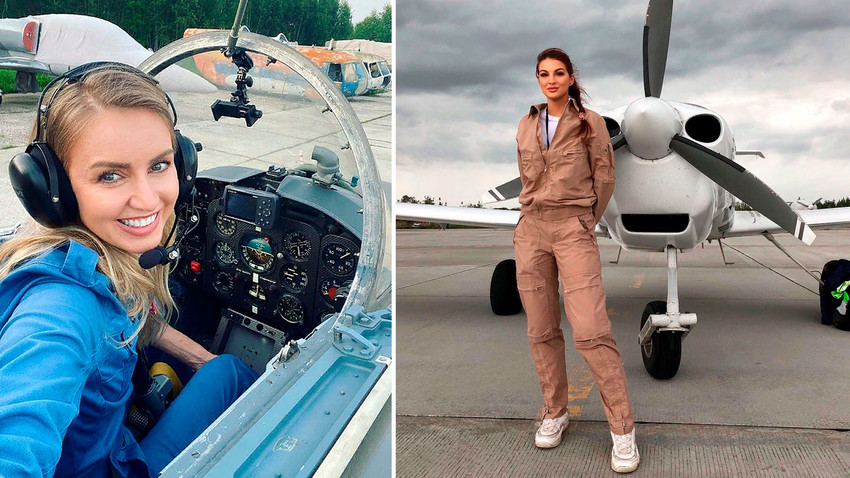 @juliaandjet; @ryzhikova_m
These ladies prove that the sky’s the limit and that anyone can follow their true calling - even if it is 10,000 feet in the air!

Being a pilot is still considered by many a “masculine” profession: Worldwide, only 5% of pilots are women. But, below are some amazing women from Russia who are breaking stereotypes and choosing to take on their male counterparts in the sky!

1. Co-pilot of low-cost Pobeda airline Olesya Shelaeva has more than 23,000 followers on Instagram. 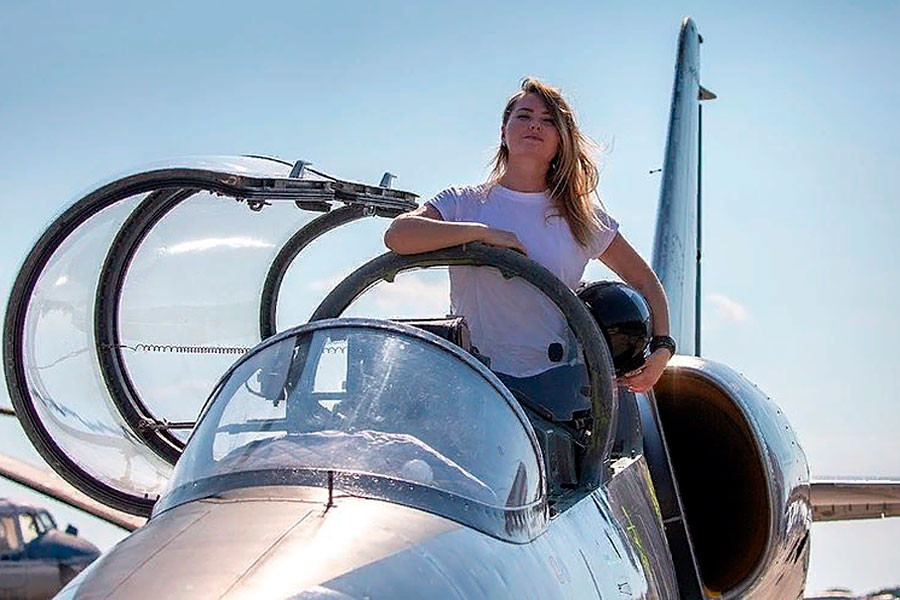 “The world of aviation has no limits and gives every enthusiast something more than just a ‘hobby’... at least, a view to the sky above,” she writes. By the way, she was also a co-pilot on the recent unusual Pobeda flight from Moscow to... Moscow. 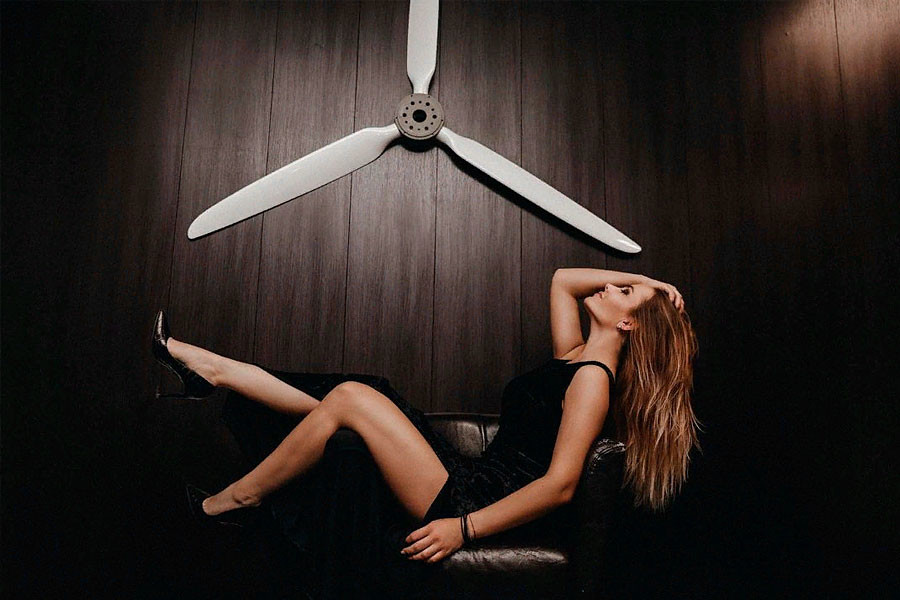 2. Yulia Krylova is the pilot of an Aero L-29 Delfín military trainer jet at the Oreshkovo airfield in Kaluga Region (incidentally, the home of Mansur the bear).

“I am an aviation addicted person. I can chat about flying for hours. And when I get a little bit tired, I drink some water and start my ‘aviatalks’ again,” is how she describes herself. 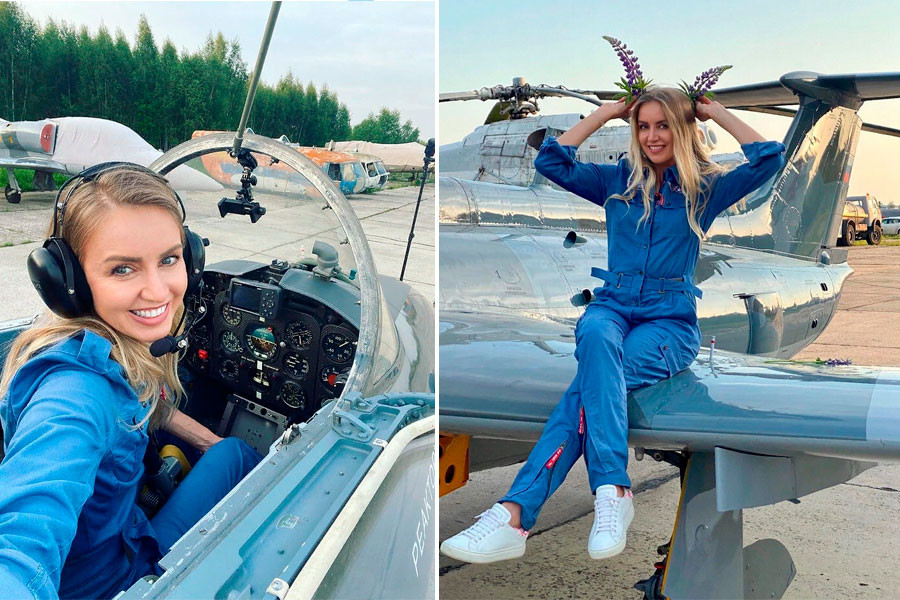 “In my blog, I show how beautiful aviation is, how beautiful the sky is and hope to inspire everyone who checks out my blog to stay interested in aviation (and in my blog) forever,” writes Yulia.

3. Maria Uvarovskaya has been a pilot in command since 2014. After graduating from the Civil Aviation Academy in St. Petersburg, she joined Aeroflot airlines in 2007. She started working as a co-pilot on the Tu-154 and now flies an Airbus A320. 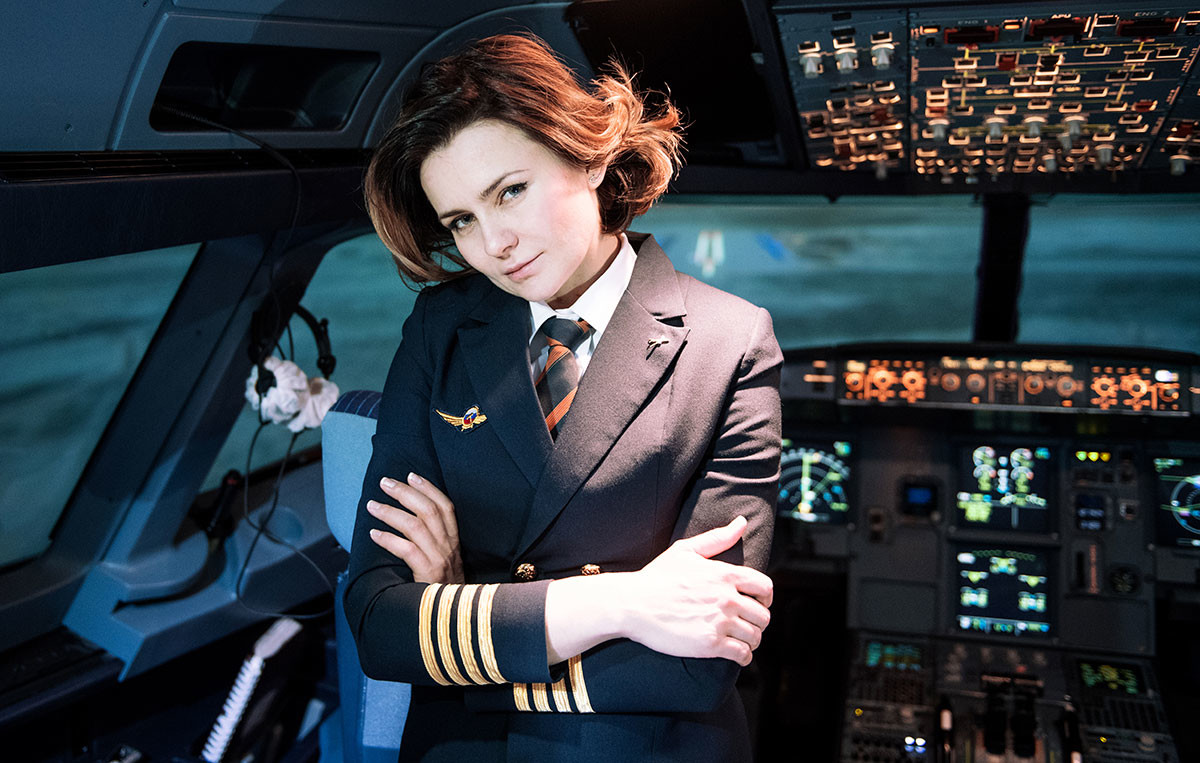 “The ultimate aerobatics in my work is when everything is quiet, calm and regular,” says Maria.

4. Margarita Ryzhikova, 25, is a student of the Orenburg Region training school, after which she will be able to work in civil aviation. For training, small four-seat Diamond DA40NG and 42NG aircrafts are used. “What does it mean for a girl to study at a civil aviation flight school? It’s the same as for a guy, but we always have to respond to such questions,” she writes ironically. However, she admits that one of the hardest things for her at school is the early wakeups. 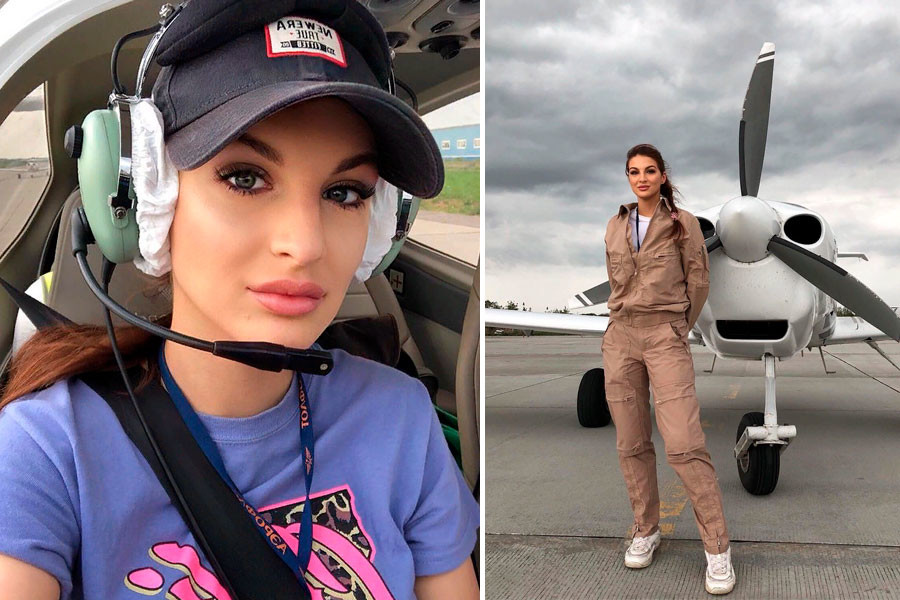 5. The first and only pilot in command at  Yakutia airlines, Anna Lozovskaya says that she was inspired by her father, a pilot of the Mi-8 helicopter.

“Looking admiringly at my father who planted a love for the sky in me from childhood, I decided to follow in his footsteps and try myself in aviation. My parents, having heard of my decision to become a pilot, didn’t interfere, they supported me,” Anna says. “I [already] have a total flight time of 4,300 hours, of which 1,100 hours were performed on sanitary tasks to provide emergency medical care in remote and hard-to-reach settlements of Yakutia,” she said.

6. At the age of 24, Alena Verkhushina is already an Airbus A320 co-pilot with Nordwind Airlines. She chose aviation in high school and finished the training school in Ryazan Region.

“Now there are a lot of girls here, the demand for this profession has risen. Maybe, because of the attraction of Instagram, maybe because the girls knew they can be pilots,” Alena says.

7. In 2017, Viktoria Kumova became the first female pilot with Utair airlines. At the age of 31, she qualified as a Boeing-737CL/NG pilot in command, after 9 years as a co-pilot.

“I like the feeling of freedom. Yes, the work is difficult, with a tough schedule, but you are not tied to one place, you are constantly changing cities, directions, the view outside the window, air routes. Each flight is individual and unique,” she says.

The addiction to the sky appeared thanks to her father, also a pilot. “In our field, female pilots are sometimes treated with some caution, but once they believed in me, they gave me a chance to fulfill my childhood dream,” Viktoria admitted.

8. Maria Trunina is a pilot in command with Aeroflot. In the beginning, she worked for ground services for the Russian flagship airline, but then she went to an aeroclub and tried her hand at flying. This inspired her so much that she first became a commercial pilot in small aviation and then trained to become a certified Boeing 737 pilot. 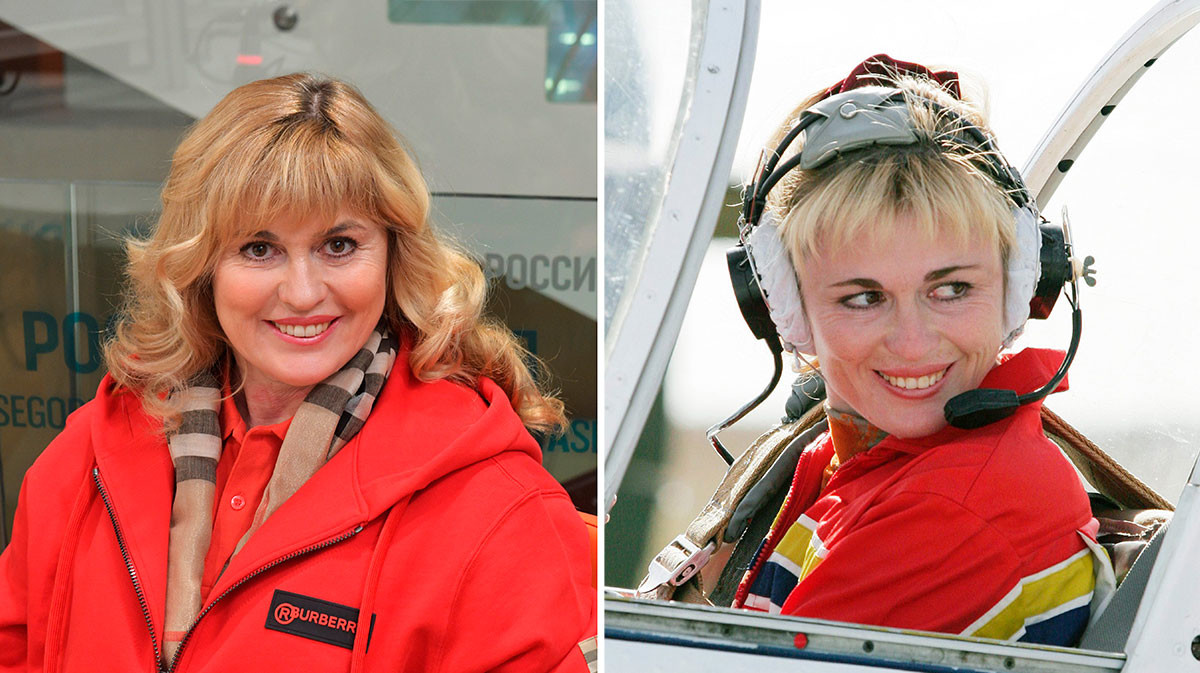 She has spent more than 30 years in the sky: she started training at the end of 1980s at an aeroclub and, since 2000, Svetlana works as instructor pilot for the Sukhoi Design Bureau. It’s hard to believe, but Svetlana became a pilot by accident: in her youth, she wanted to go skydiving, but mixed up the appointments and went on a course for aviation sports, instead.

10. Olga Yeroshenko is a commercial pilot. She is involved in aircraft hauling and route coordination. In her blog, she explains what it means to be a blondie in the air and jokes about the combination of her manicures and the color of the aircraft. 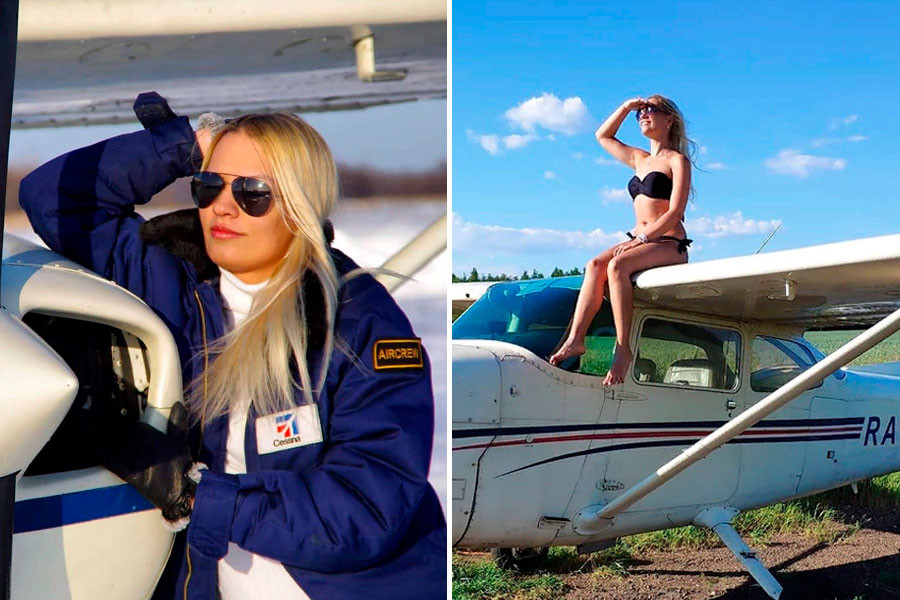