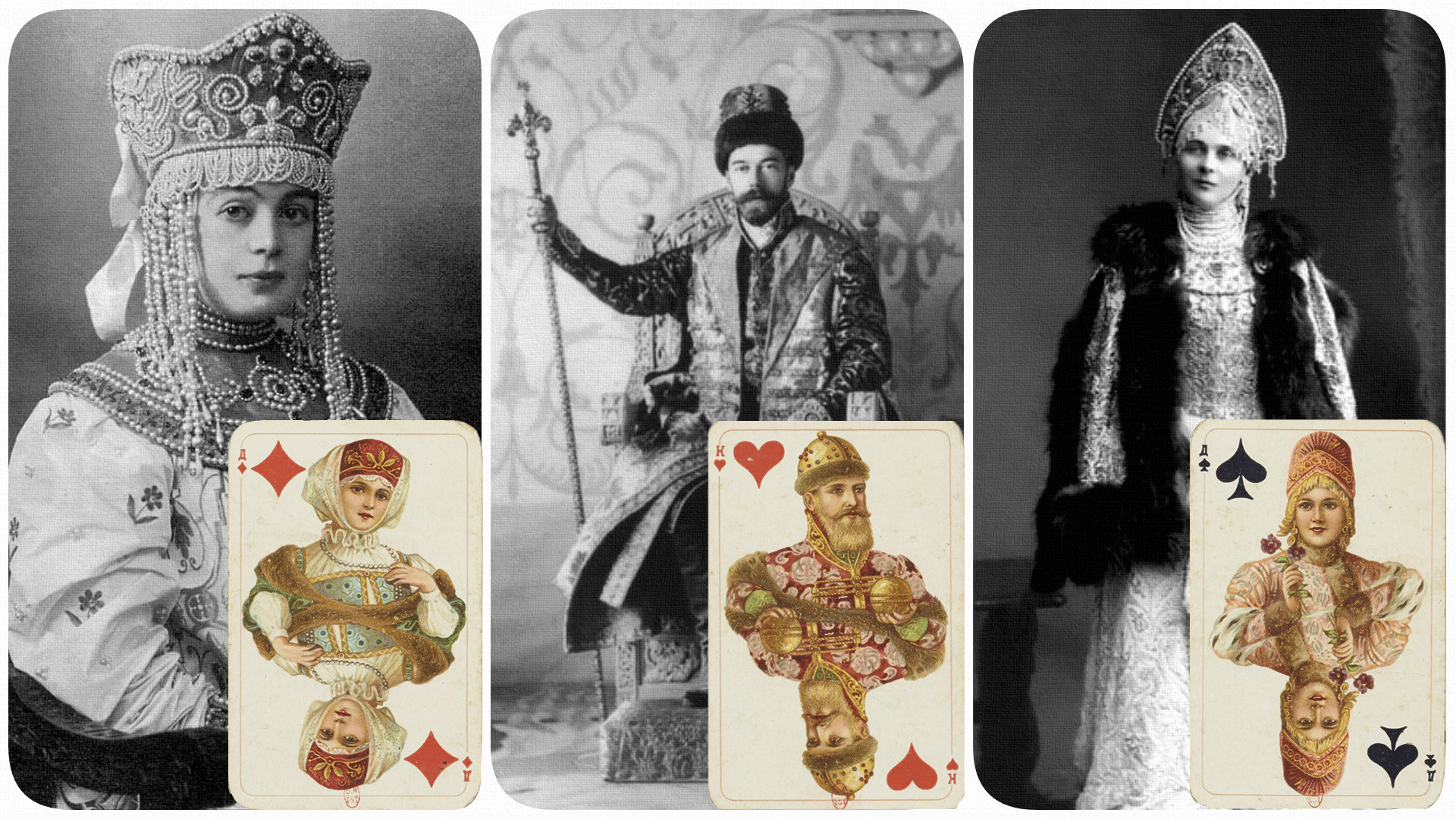 Archive image/CGACPPD
Russian Style playing cards were the most widely used deck of cards in Soviet times. And yet, few people knew that these cards actually depicted members of the Russian imperial family in the splendid costumes they wore to a masquerade ball.

The masquerade ball, which took place in the Winter Palace in 1903, brought together the whole of the country's political elite and was one of the most glamorous and extraordinary parties of its time. All guests were required to wear 17th century historical costumes. Their outfits were indeed spectacular, made from the most expensive fabrics and decorated with family jewels.

Thanks to Empress Alexandra Feodorovna, who wanted to preserve the ball for posterity, there are over 100 photogravures from it stored in archives today (some of which have even been painted by contemporary artists).

In 1913, to mark the 300th anniversary of the House of Romanov, a deck of cards called Russian Style was produced in St. Petersburg and depicted guests to that very ball. After the 1917 revolution, the Imperial Card Factory was shut down, but production of this deck of cards was later resumed since card games remained a popular pastime. So, who were the pictures in this deck of cards based on? 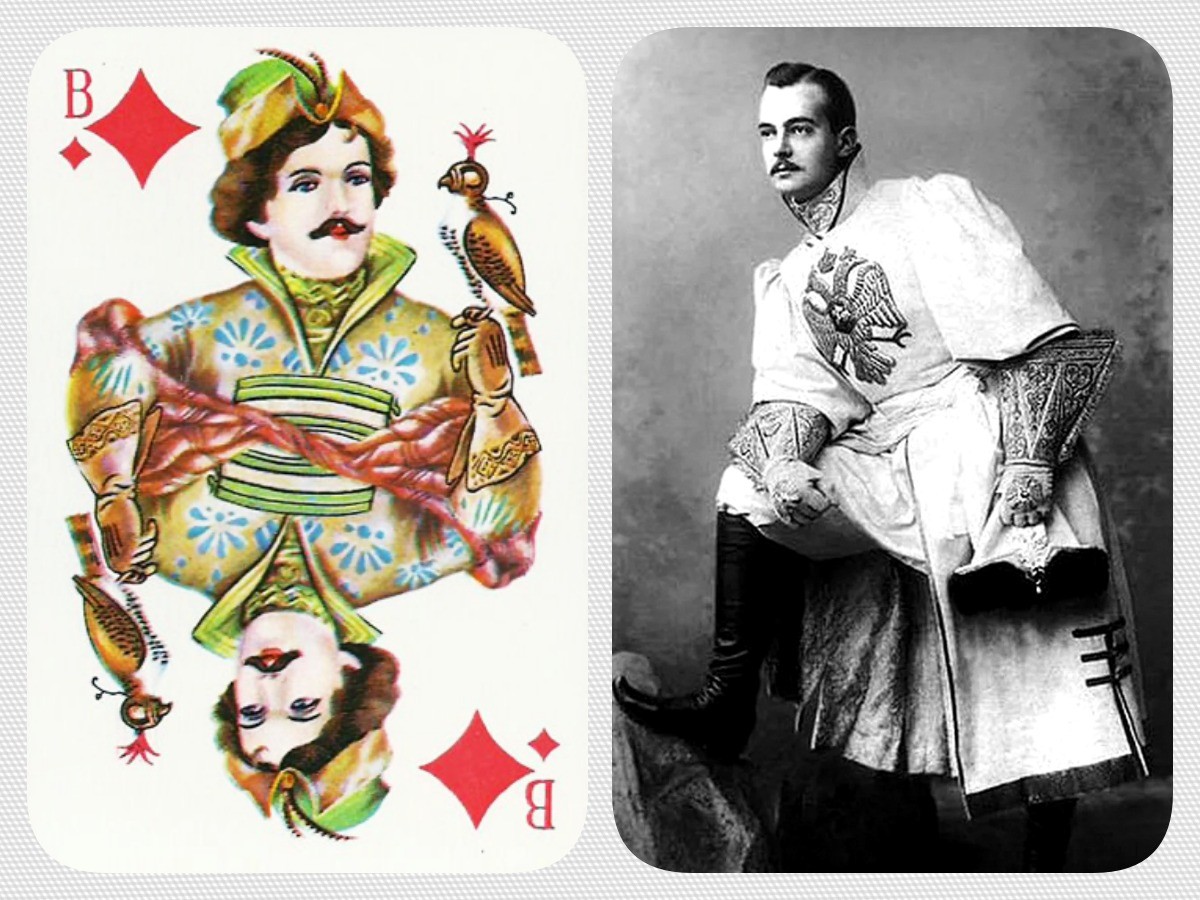 A grandson of Alexander II, Andrei Vladimirovich (1879-1956) chose the ceremonial costume of a 16th-17th century royal falconer for the ball. After the revolution, he and his mother, Maria Pavlovna (one of the few Romanovs who managed to take her jewelry out of the country), emigrated to France, where he lived until his death. He is officially considered the last Grand Duke of the Romanov dynasty. 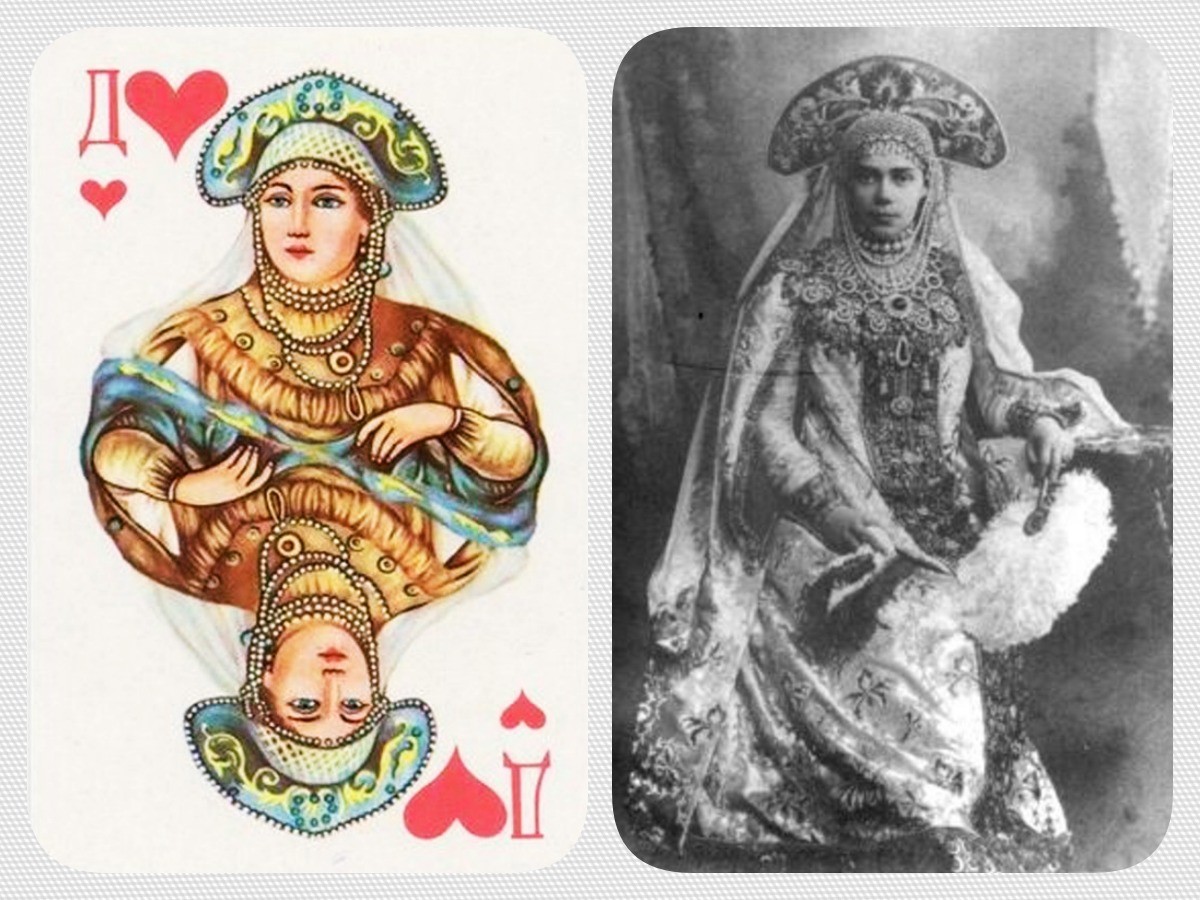 A sister of the last emperor, Nicholas II, Xenia Alexandrovna (1875-1960) dressed for the ball as a Russian boyar woman. Her fan and kokoshnik were made by the Faberge jewelry workshop, while the gown was based on the costume of Tsarina Maria in the 1890 production of Tsar Boris.

She and her mother, the Dowager Empress Maria Feodorovna, emigrated in 1919, first to Denmark and later to Great Britain (Queen Alexandra of Denmark, mother of King George V, was Maria Feodorovna's sister). 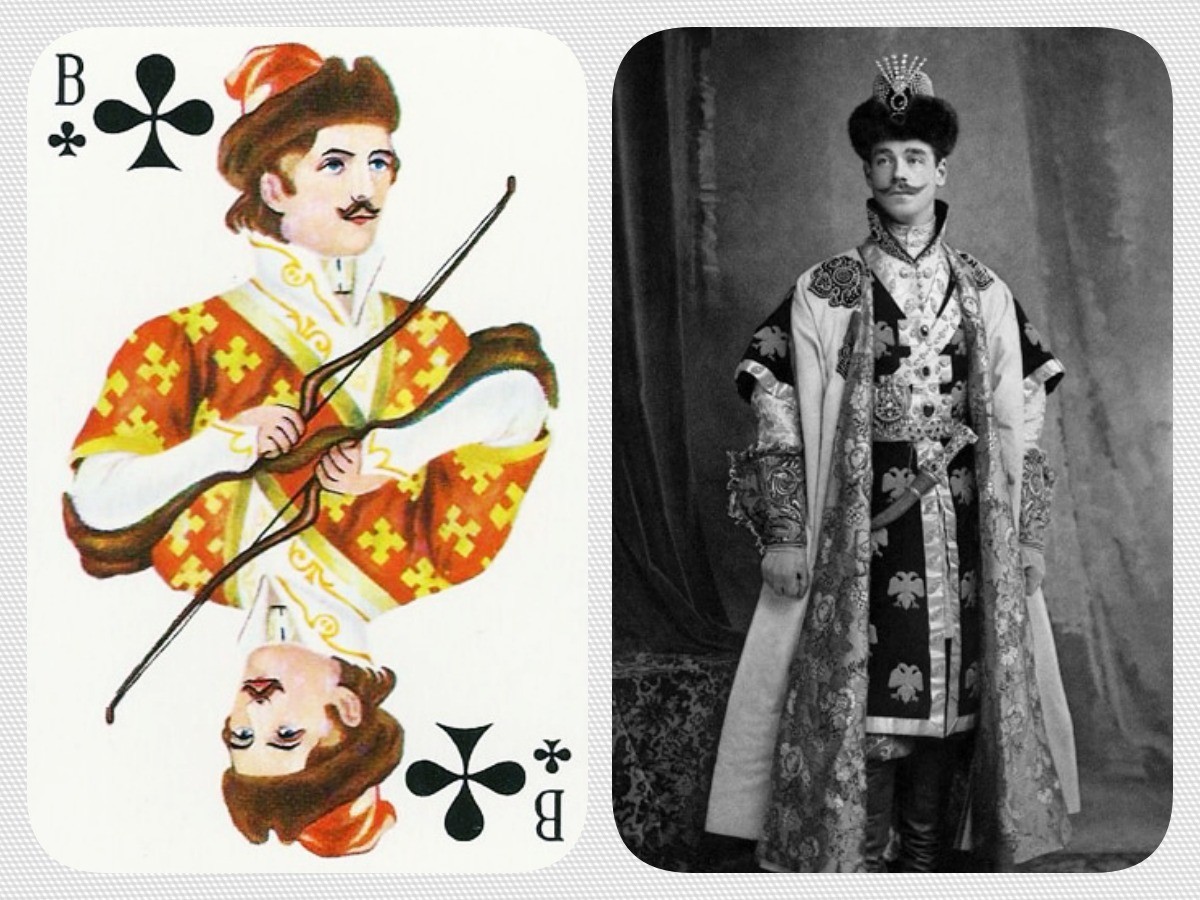 After the revolution, Nicholas II abdicated the throne to his younger brother Mikhail (1878-1918), who for just one day was legally considered the last ruler of the Russian Empire, until he too abdicated and was arrested by the new government shortly thereafter. Mikhail Alexandrovich spent his last days in exile in Perm, where he was eventually killed by local Chekists. In a photograph from the 1903 ball, the Grand Duke is seen wearing a Tsarevich's field costume. 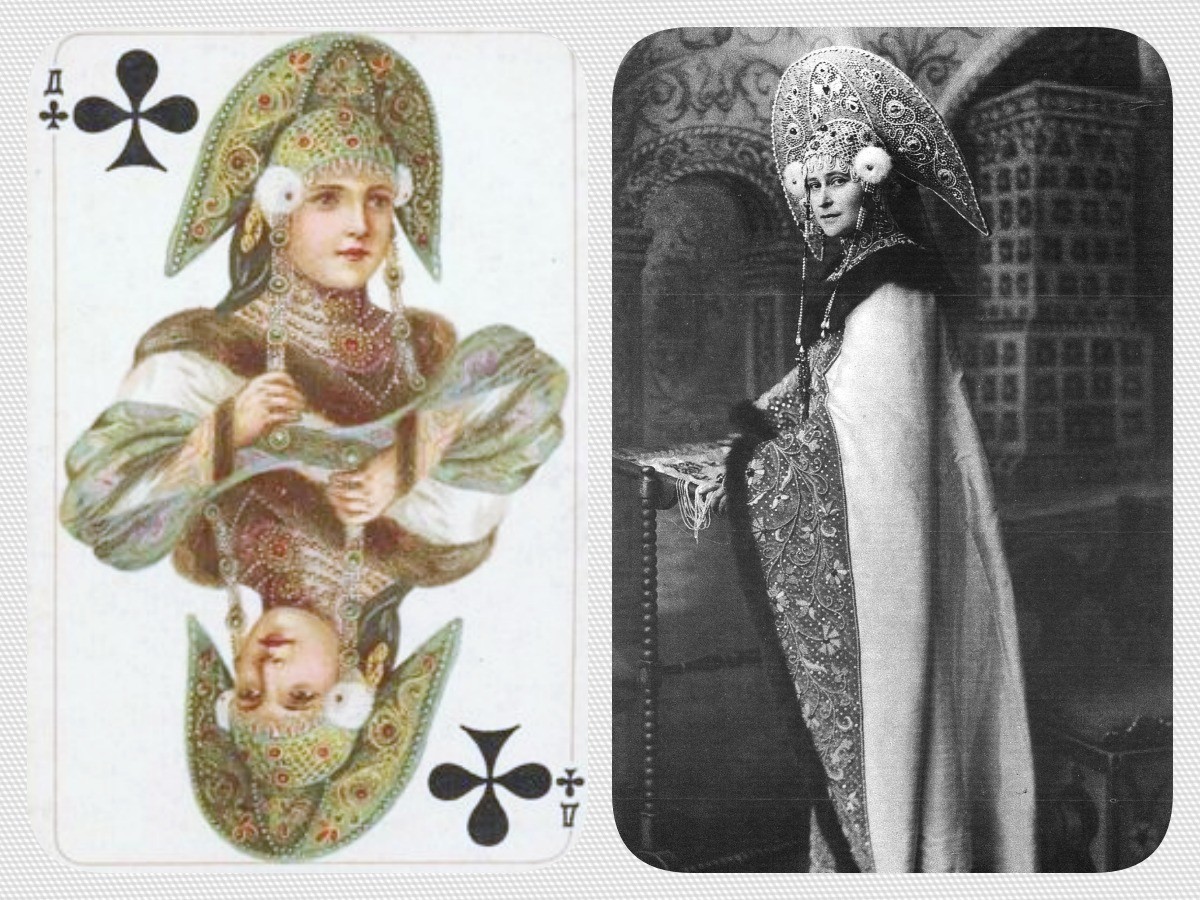 A sister of the last empress, known in the family as Ella (1864-1918), was married to Governor-General of Moscow, Sergei Alexandrovich Romanov. In this photo, she is dressed as a princess in an embroidered gold dress decorated with black fur and a jeweled kokoshnik.

Two years after this ball, her husband was killed by a revolutionary's bomb, and the Grand Duchess gave away all her jewelry and became a nurse in a convent she founded. In 1918, she and other members of the imperial family were thrown alive into a mine in the town of Alapayevsk in the Urals region. In the 1990s, she was canonized, and her statue graces the facade of Westminster Abbey in London. 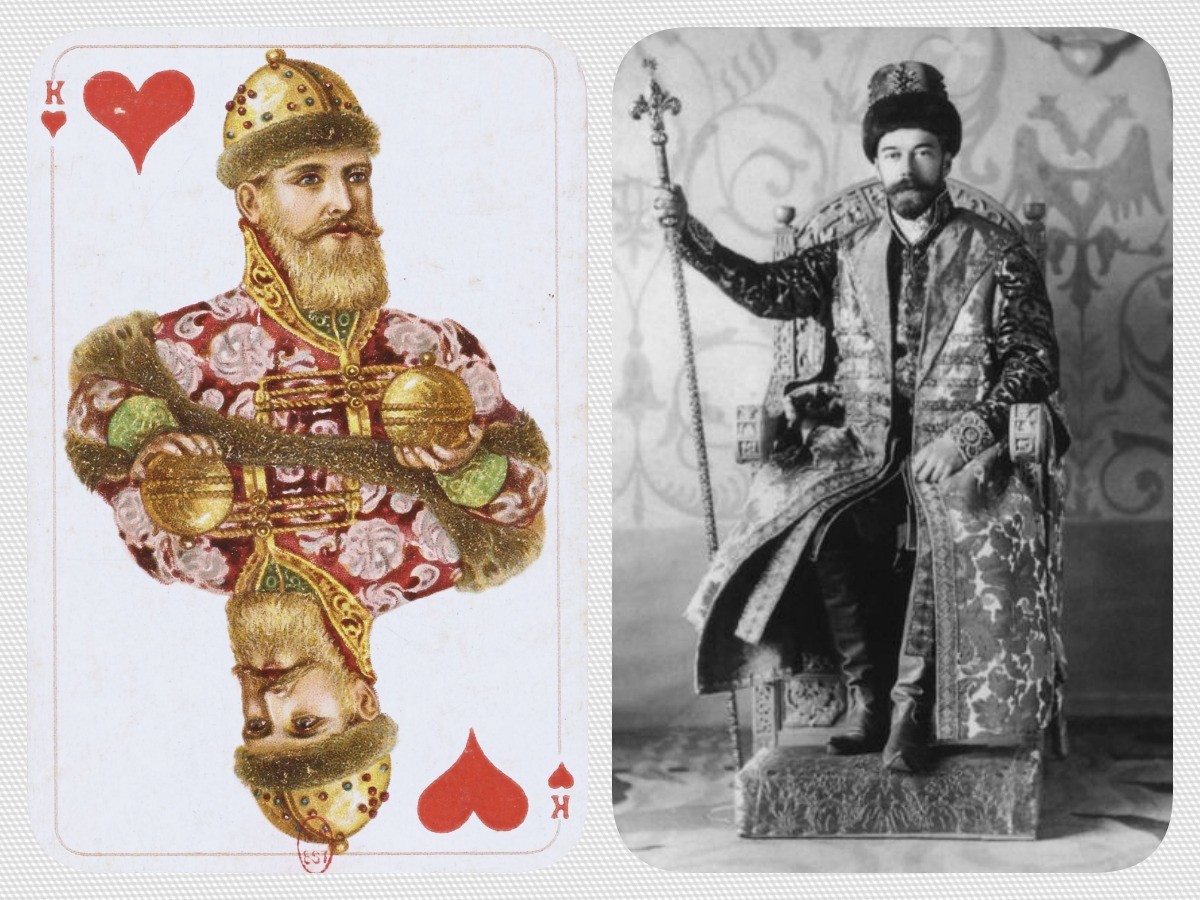 For the grand ball, Nicholas II (1868-1918) chose to dress up as Tsar Alexei Mikhailovich (1629-1676), the second Romanov on the Russian throne. Interestingly, his costume’s buttons and stripes were made in the 17th century, while the mace the emperor is holding once belonged to Alexei Mikhailovich himself. This mace, decorated with diamonds, emeralds, pearls and tourmalines, is kept in the Kremlin's Diamond Fund.

The life of the last emperor of Russia ended in the basement of a house in Yekaterinburg, where he was shot along with his entire family. 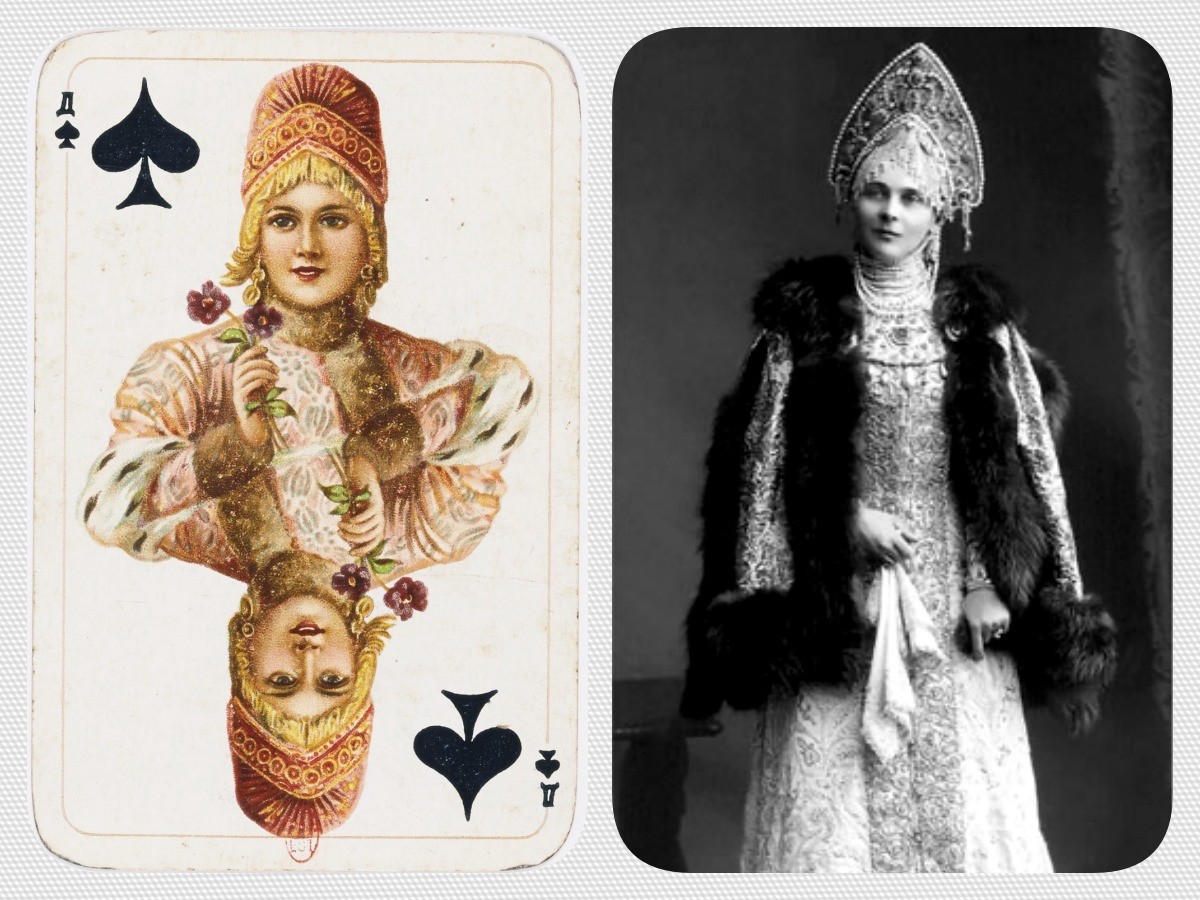 In addition to Romanovs, the deck of cards featured members of their inner circle too. Zinaida Nikolayevna (1861-1939) came from the fabulously rich Yusupov family. Her son Felix, who married Xenia Alexandrovna's daughter Irina, was one of the people who murdered Grigory Rasputin. She escaped from Russia in 1919 and managed to take some of the family's fortune out of the country, which allowed them to lead quite a comfortable life in Paris. 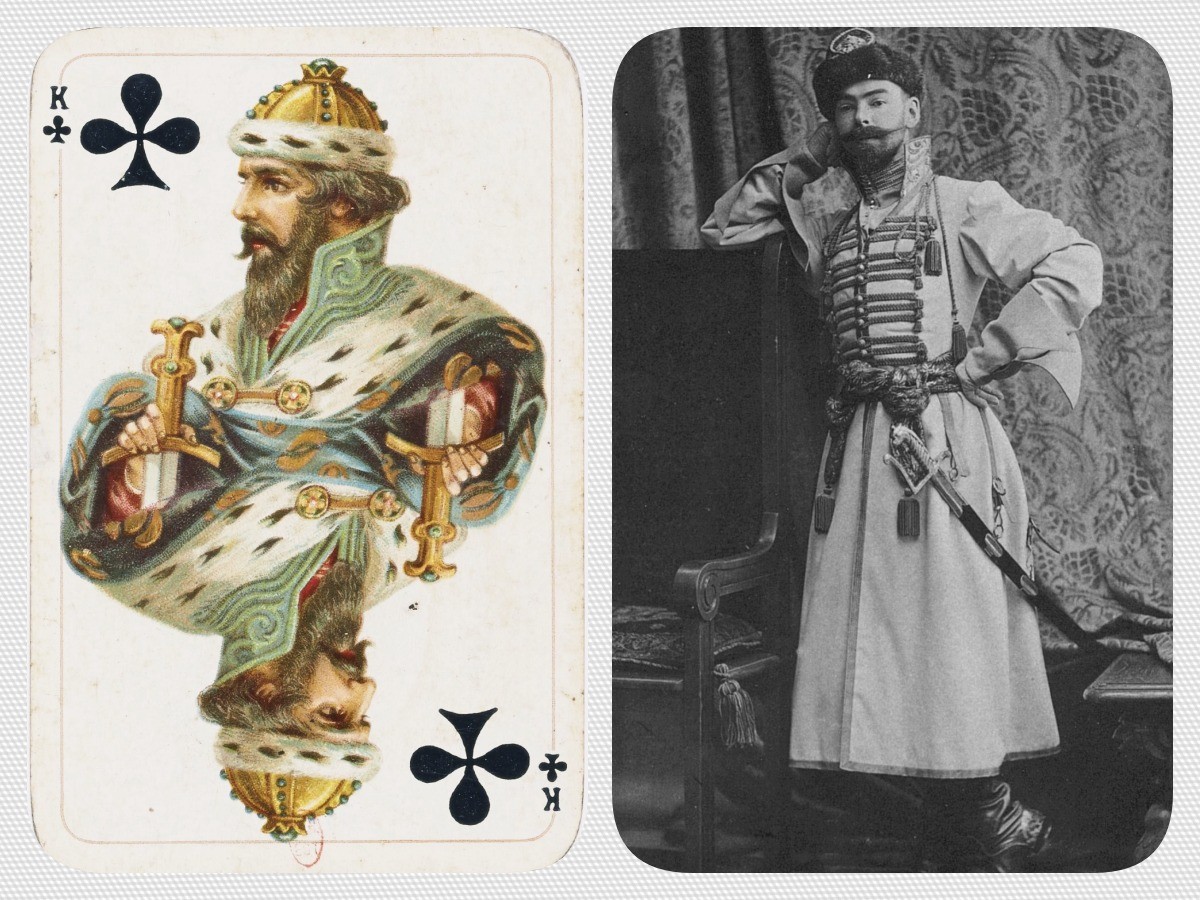 Lieutenant-General Mikhail Grabbe (1868-1942) dressed up as a member of the 17th century royal guard for the ball. True to character, he remained loyal to the Tsar long after the revolution. While in exile in Paris, he was an active member of the Russian Imperial Union, the Union of Advocates of the Memory of Nicholas II and other similar societies. 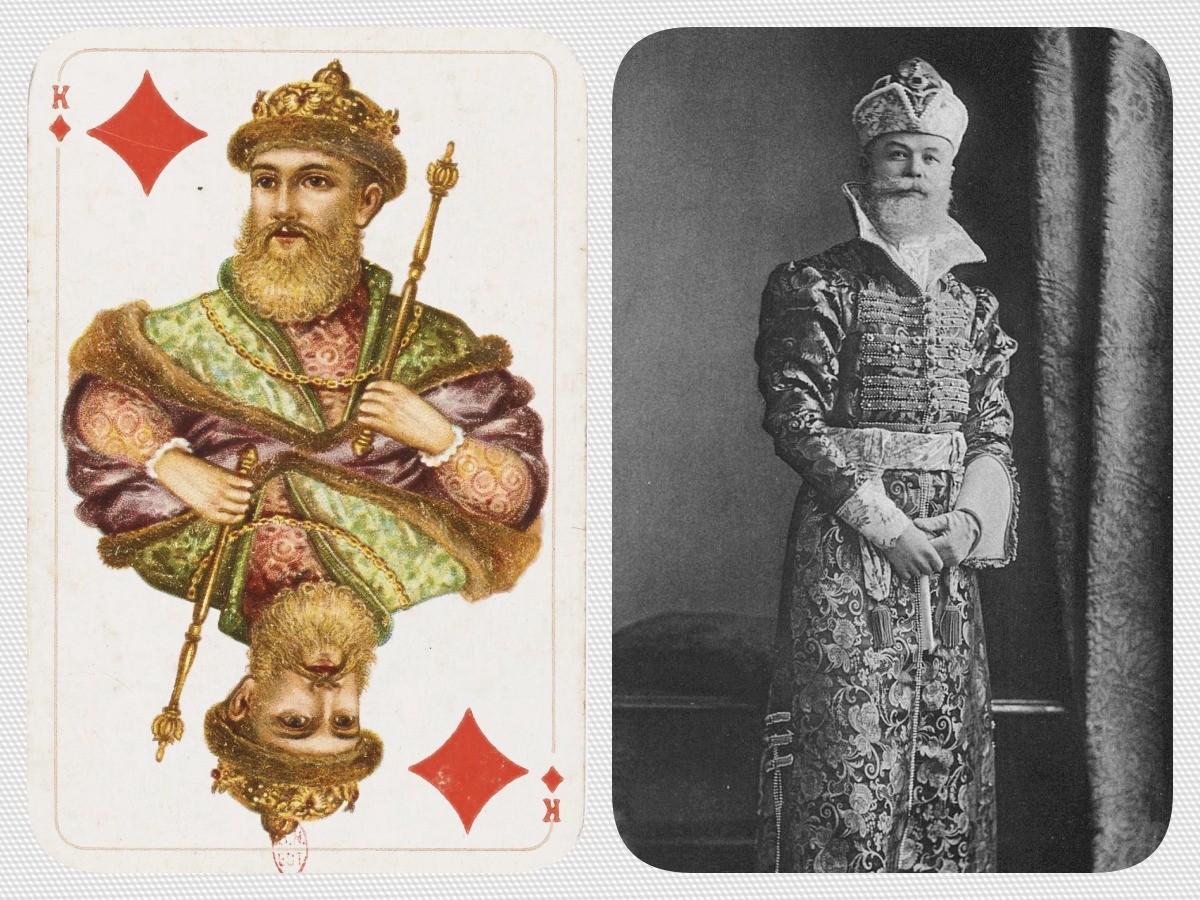 Little is known about Nikolai Gartung. He remains in history primarily as a guest at this famous ball who came dressed as a boyar and inspired the king of diamonds in this deck of cards. 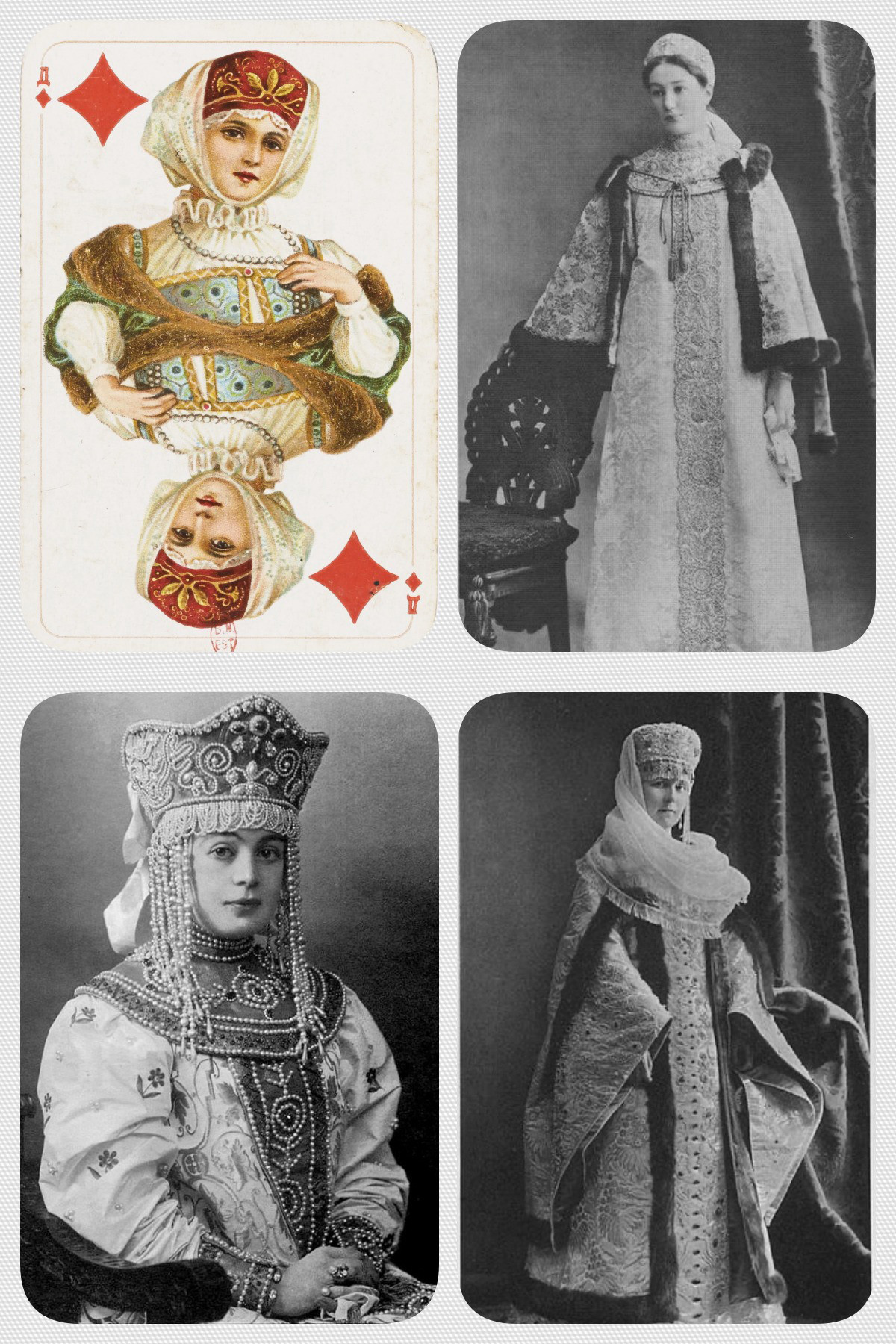 A lady-in-waiting to Nicholas II's mother, Maria Feodorovna, and his wife Alexandra Feodorovna, Countess Tolstaya (who was also Leo Tolstoy's aunt) dressed up for the ball as a boyar's unmarried daughter. However, there are also other theories claiming that the queen of diamonds in the deck is based on several other real-life figures, such as the princesses Vera Kudasheva and Sofya Durnovo, who came to the ball in similar costumes.

Jack of hearts: Adjutant Nikolai Volkov and others 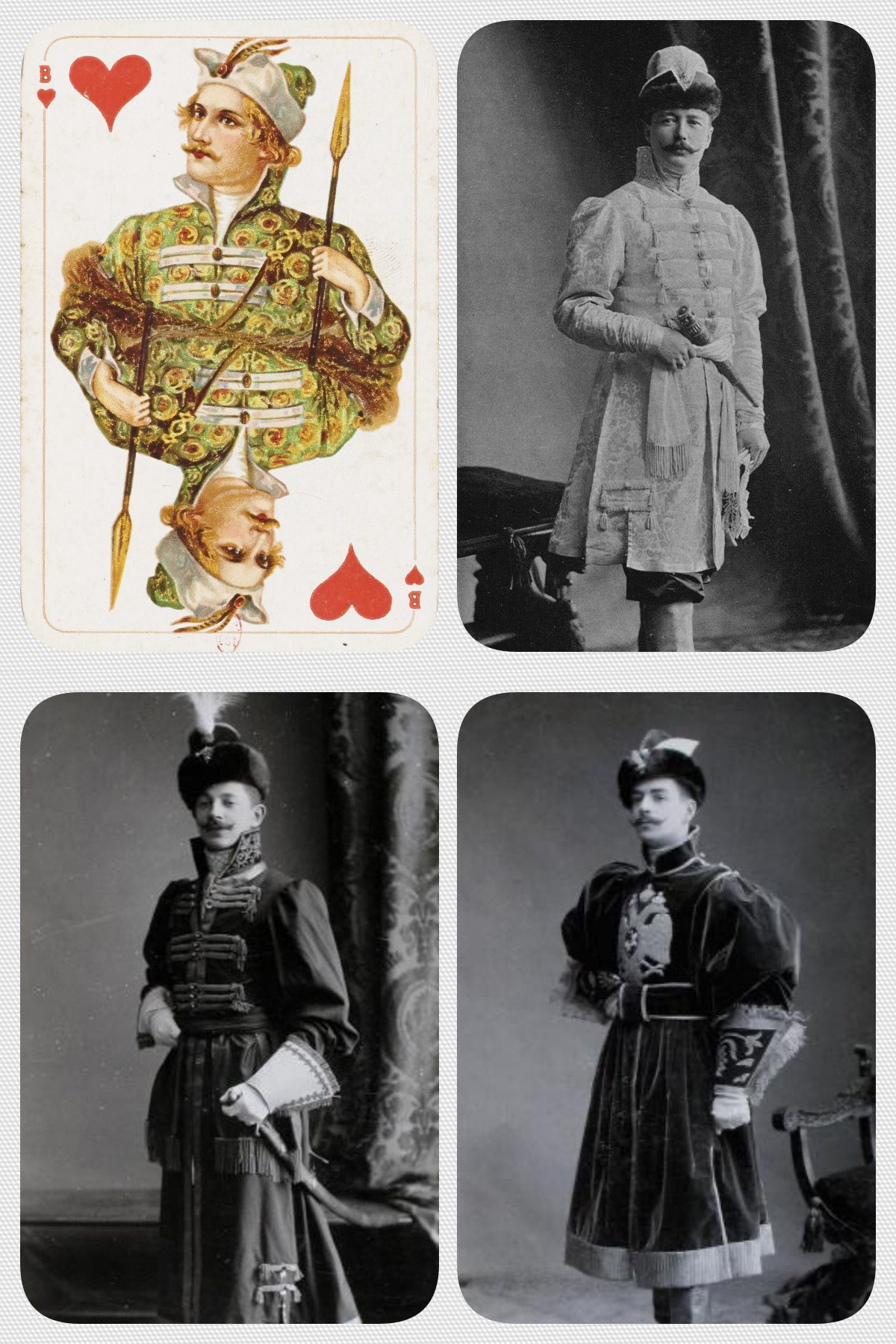 This is another card inspired by several different guests to the famous ball. Nikolai Volkov (1870-1954), who dressed as a boyar, served at the time as an adjutant to Grand Duke Alexei Alexandrovich (son of Alexander II). During World War I, he served as a naval attaché in Great Britain. He was abroad at the time of the 1917 revolution and never returned to Russia.

The second figure the card’s image is based on was a second lieutenant with the Imperial Guard of the Preobrazhensky Regiment, Nikolai Shter, who wore a serviceman's costume to the ball.

And the third real-life figure behind this jack of hearts was a cornet with the Imperial Guard of the Cavalry Regiment, Alexei Tizel, who came to the ball dressed as a falconer. 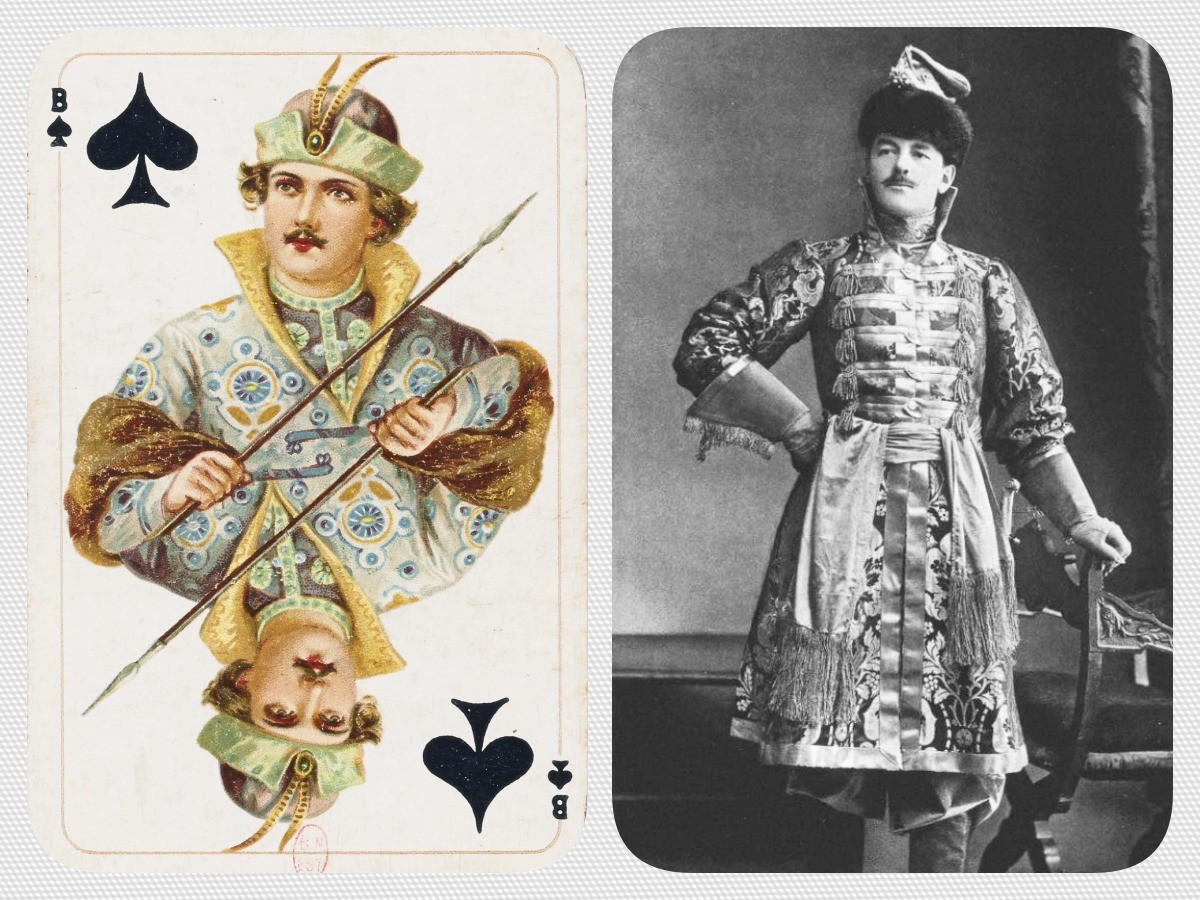 Alexander Bezak (1864-1942), who came to the ball dressed as a boyar, was an adjutant to Grand Duke Nikolai Mikhailovich, Nicholas II's uncle. He finished military service before World War I and after the revolution lived in France and traveled around the world.

King of spades: The Image of Ivan the Terrible 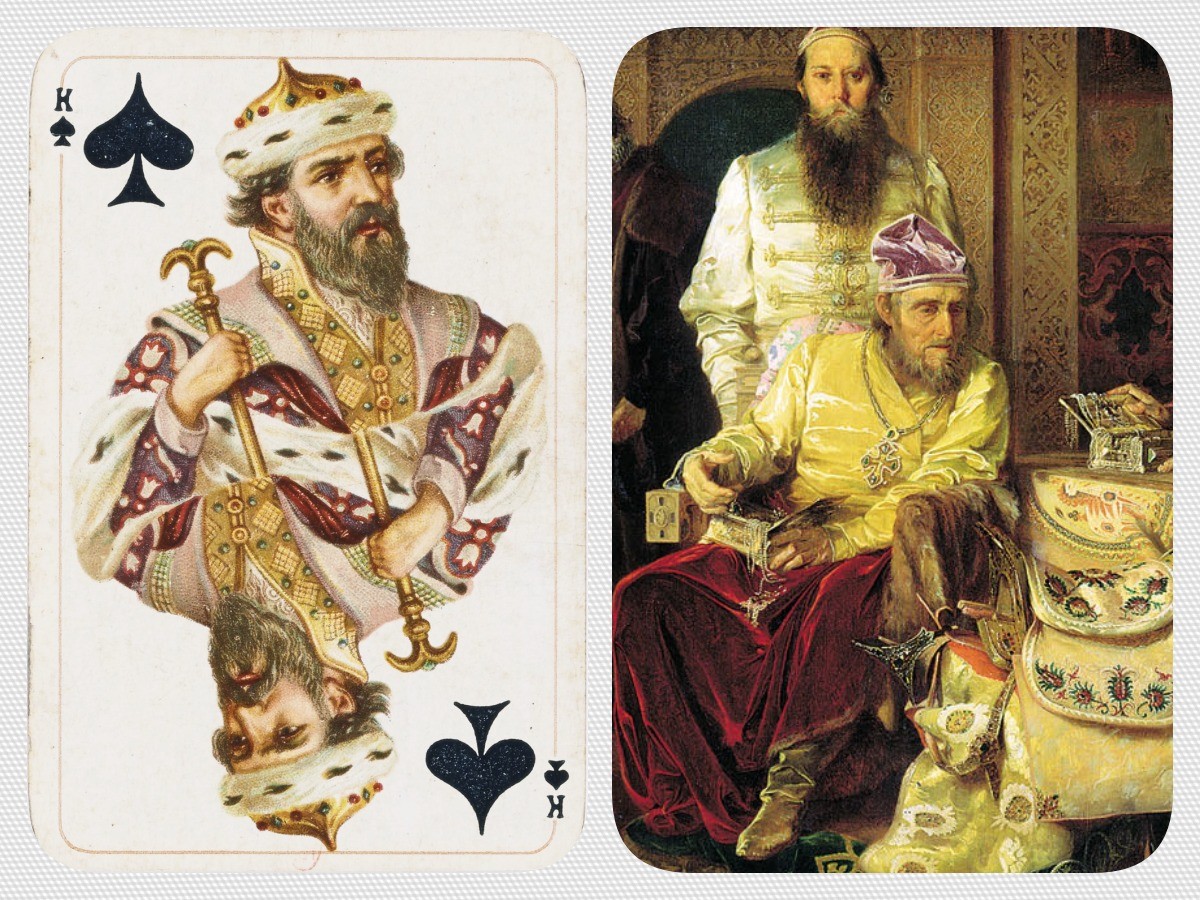 This is the only card that does not depict a guest to the 1903 ball. Instead, the image of the king of spades was based on a painting by Alexander Litovchenko called "Ivan the Terrible is Showing Treasures to English Ambassador Horsey."