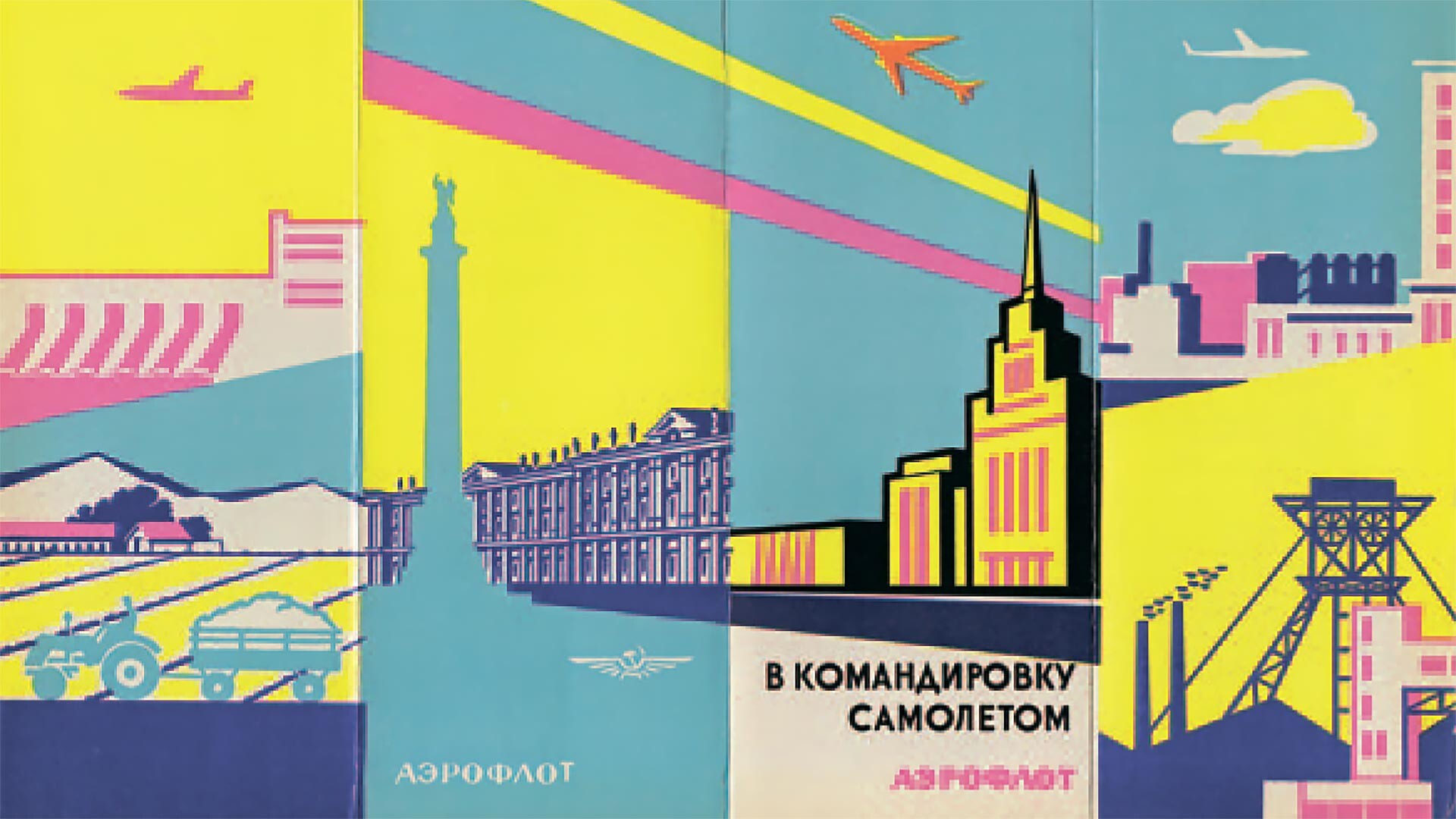 Bruno Vandermueren / FUEL Publishing
The history of the USSR’s oldest airline reflects the history of the country itself. Take a look at some of the Aeroflot commercials throughout the decades. 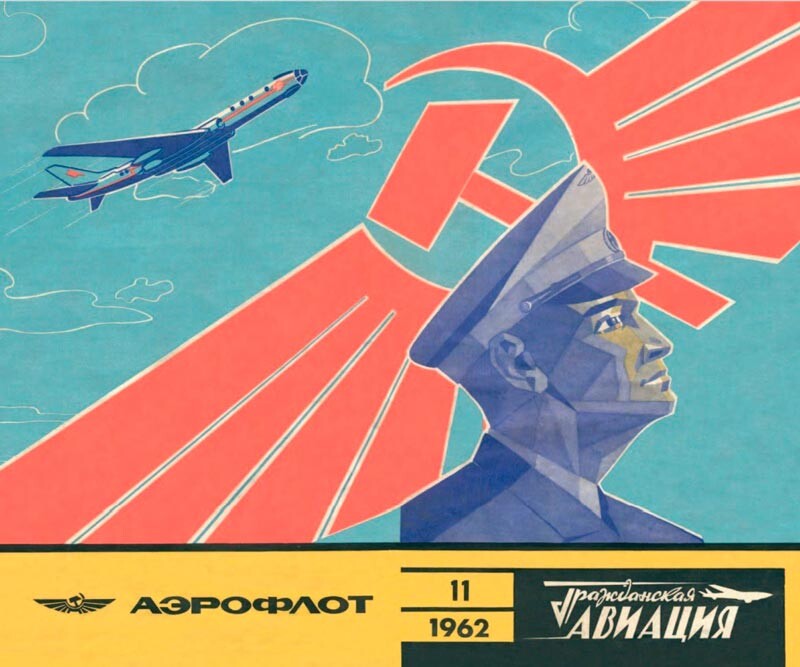 Under the Aeroflot Emblem, by artist A. Kirillova. Cover of Aeroflot Magazine, November 1962

Nowadays, after the USSR's fall, Aeroflot is a partly private, partly state-owned airline. But, in Soviet times, ‘Aeroflot’ was rather a naming of civil aviation as a whole, which, by 1991, included some 30 inner directorates. 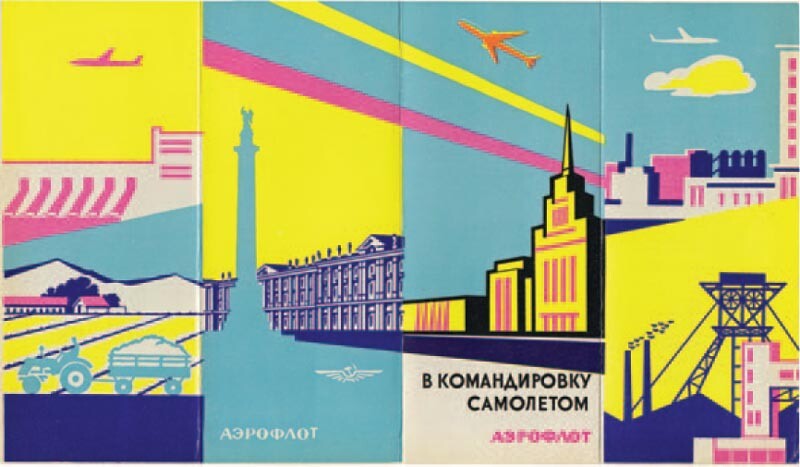 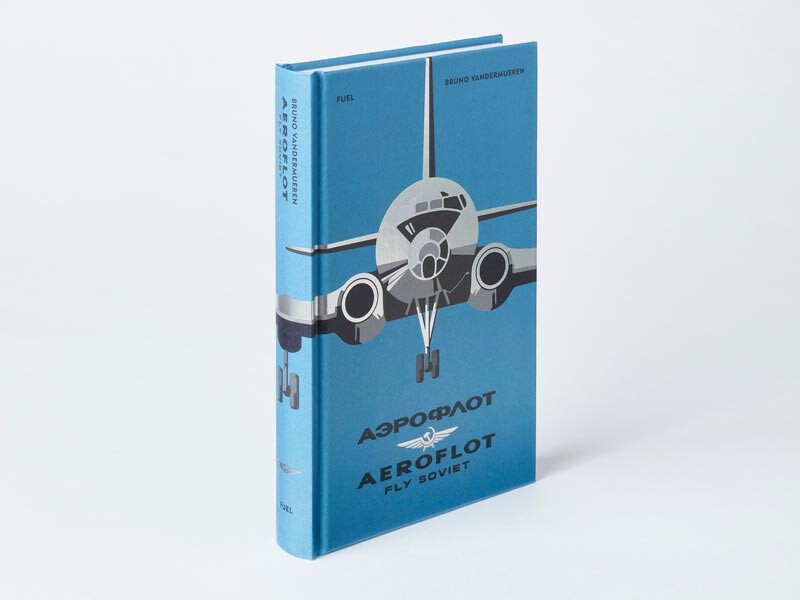 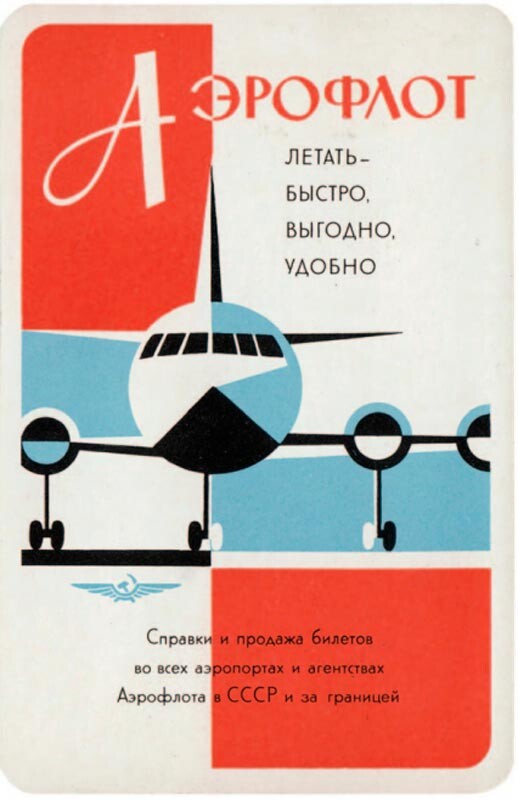 Aeroflot. Fly – Fast, Profitable, Convenient. (Inquiries and ticket sales at all airports and Aeroflot agencies in the USSR and abroad). Pocket calendar depicting an Il-18, 1961

“In 1939, in a BBC radio broadcast, Winston Churchill described Soviet Russia as ‘a riddle wrapped in a mystery inside an enigma’. The same could be said of Aeroflot, the Soviet Union’s only airline, which to some degree served as a microcosm of the country itself,” Vandermueren writes. 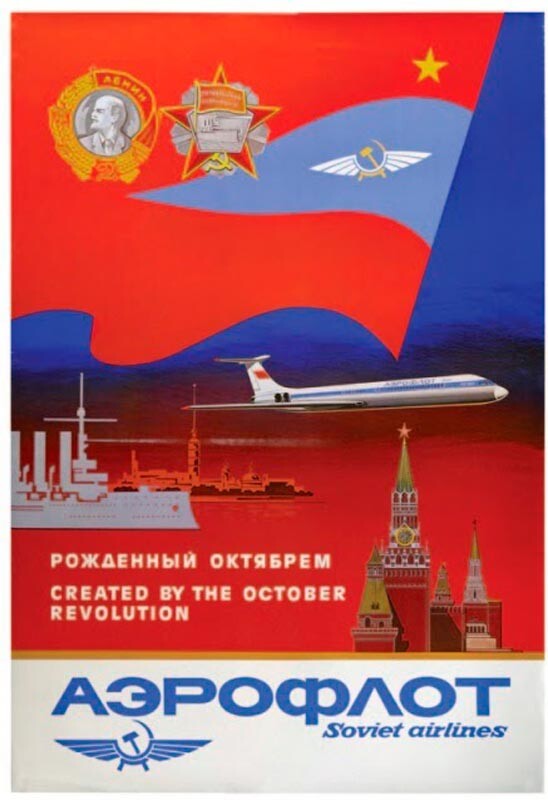 Created by the October Revolution. Poster, celebrating the 60th anniversary of the Revolution of 1917, c.1977

While the borders of the USSR were closed, the huge country required having a convenient transport system. Building railways that would cover the whole country was not very practical in an economic sense, as most of Siberia was not much inhabited. The USSR’s big size forced the country to embrace aviation. 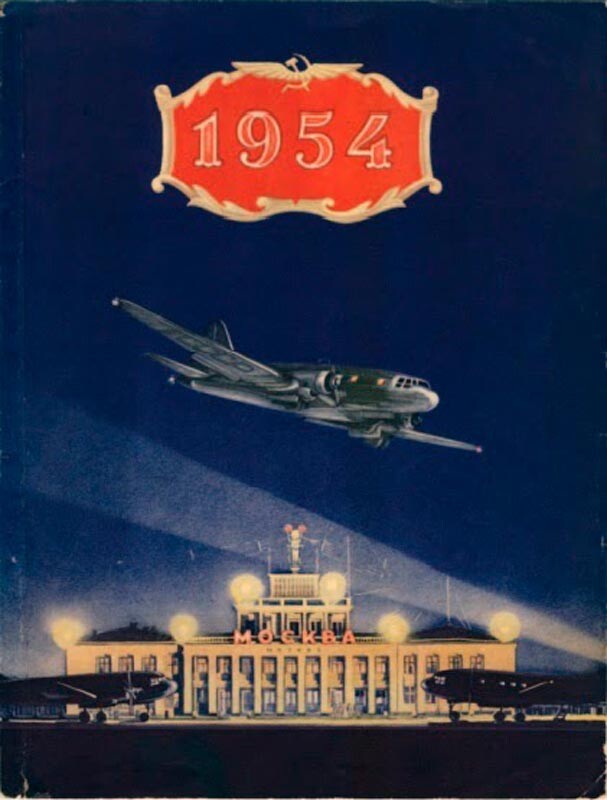 Before 1930, the ‘Dobrolet’ society of voluntary air fleets had operated for several years. Aeroflot was founded in 1932 and officially defined as “a civil aviation organisation subordinate to the USSR Ministry of Civil Aviation”. By the late 1930s, Aeroflot had the largest number of aircraft in the world (most of them small Polikarpov biplanes). 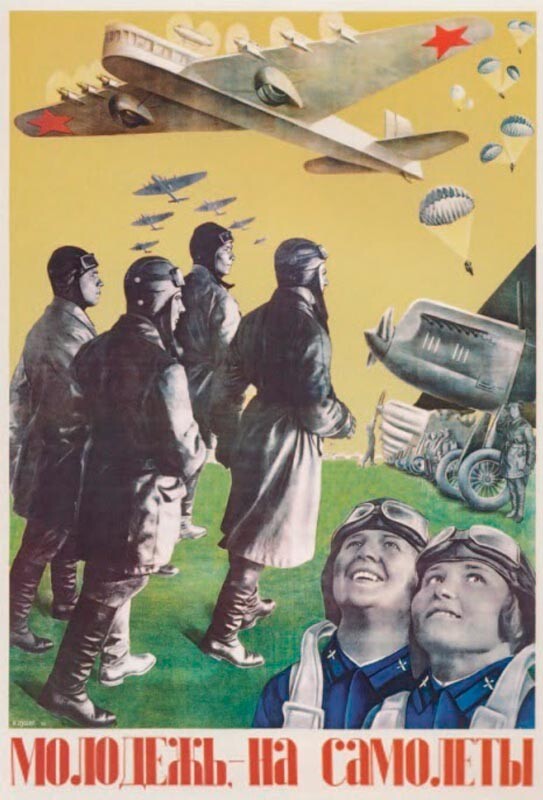 In the 1940s Aeroflot rapidly grew and had all the chances to enter the international arena. However, the war had a dramatic effect on the airline. On June 22, 1941, when the Nazis invaded the USSR, civil air routes in the European part  of the USSR were immediately stopped. 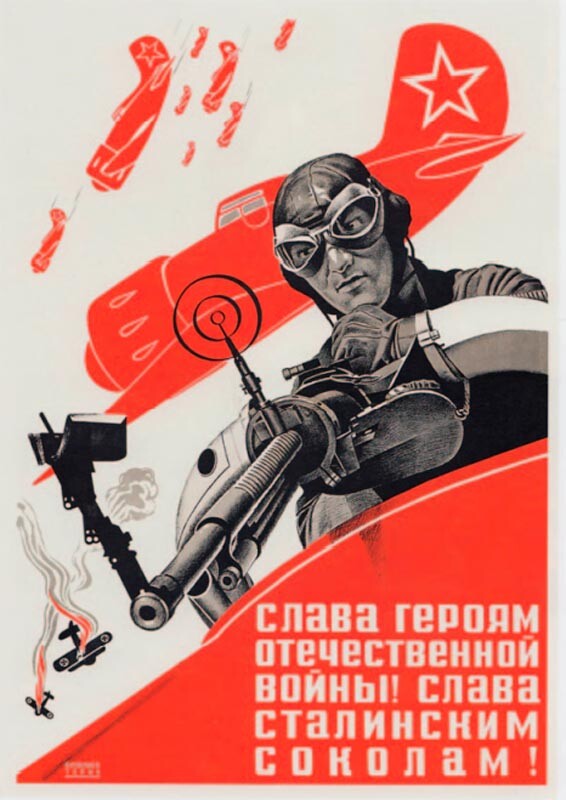 Glory to the Heroes of the Great Patriotic War! Glory to the Stalinist Falcons! Poster by artists L. Torich and P. Vandyshev from the beginning of World War II, 1941

The Aeroflot workforce was inducted into military service, with many of its pilots, navigators, technicians, radio operators and other experts joining long-range bomber units. Four hundred and ten from Aeroflot’s 2,000 planes were destroyed by August, 1941. While growth of civil aviation was severely hampered, Soviets produced an estimated 112,000 combat aircraft during World War II! 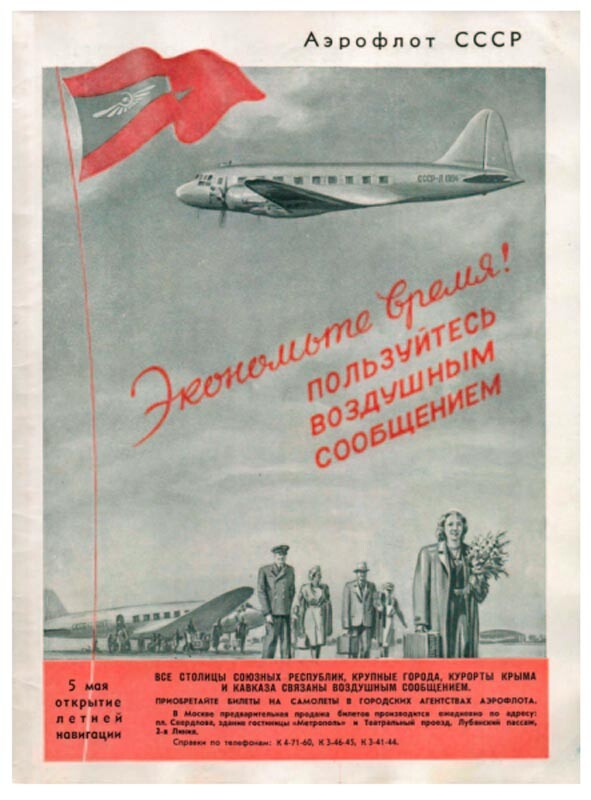 Save Time! Use Air Transport. Advertisement in weekly Ogonyok magazine, 1949

By late 1946, the Aeroflot fleet consisted of more than 3,100 planes, including some Lend-Lease and trophy German aircraft. While the Aeroflot civil aviation fleet had firstly only Polikarpov small biplanes and former cargo Li-2, the variety started growing. Famous for the Il-2 assault plane, nicknamed the ‘flying tank’, aircraft designer Sergei Ilyushin created the first post-war Soviet transport plane, the Ilyushin Il-12, in 1946. That same year, Antonov An-2 single-engine biplane was constructed in Novosibirsk. 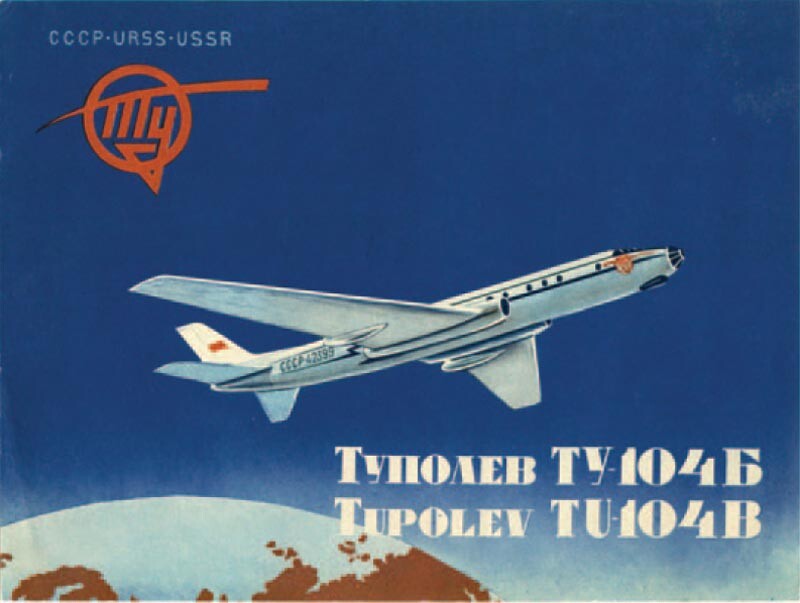 The light Yakovlev Yak-12 utility aircraft entered Aeroflot service in 1950, replacing the outdated Polikarpov. In 1956, the Soviets revealed the first passenger jetliner - the Tu-104 - that landed at London Heathrow on its maiden international flight. For two years, the Tu-104 was the world’s only commercial passenger jet plane in service.

Soviet engineers provided new models regularly, improving both speed and comfort of the aircraft. In the 1950s, the civil aviation industry increased rapidly and airplanes as transport gained popularity. And, in 1958, the volume of passengers it carried surpassed that of American Airlines, the then world leader in passenger numbers, while the commercial slogan of Aeroflot pushed “saving time”. 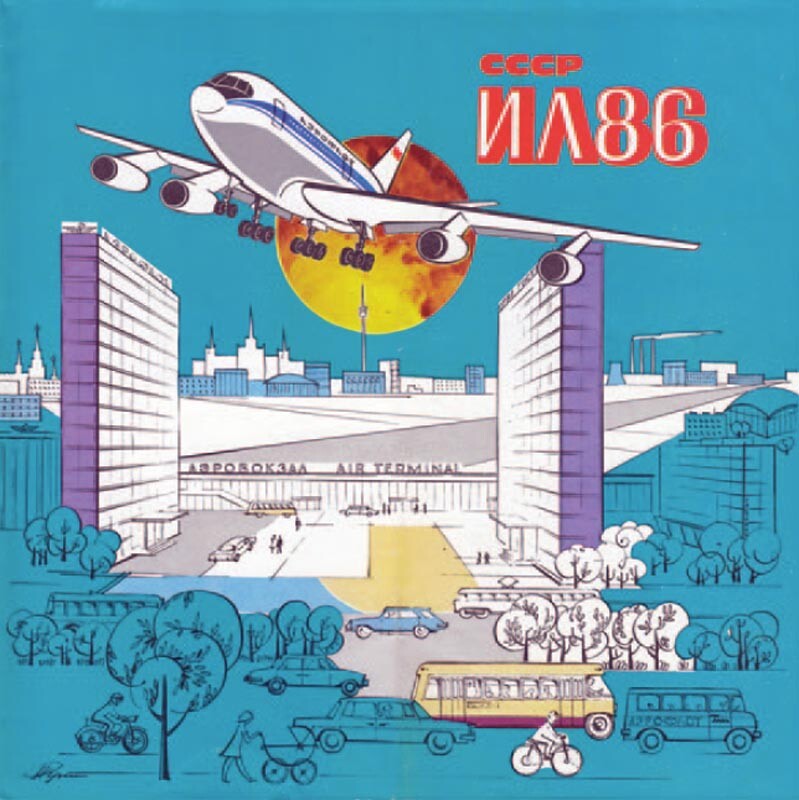 Aeroflot also developed a helicopter fleet. And, in 1959, it opened its first regular passenger helicopter route on the Crimean peninsula - Mi-4 helicopters circulated in summer between Simferopol and the popular holiday resort of Yalta. 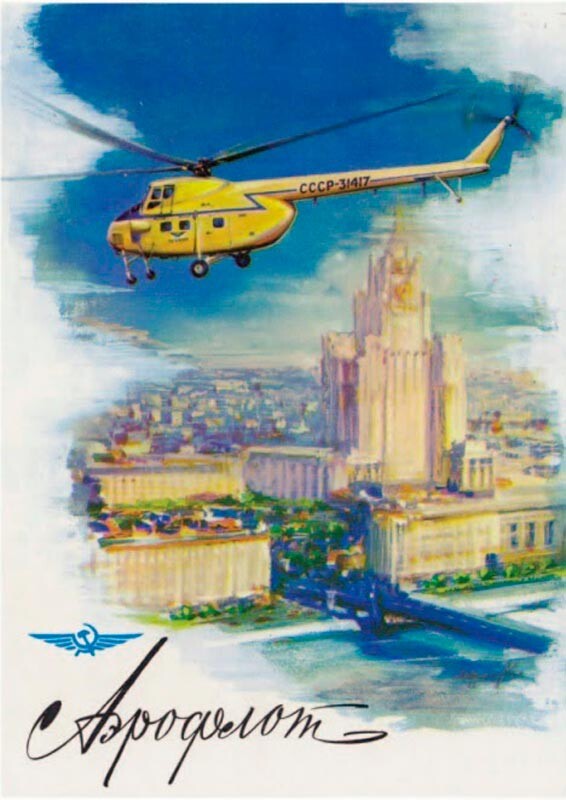 Aeroflot. Postcard with an illustration of a Mil Mi-4 flying above one of Moscow’s Seven Sisters buildings, c.1960 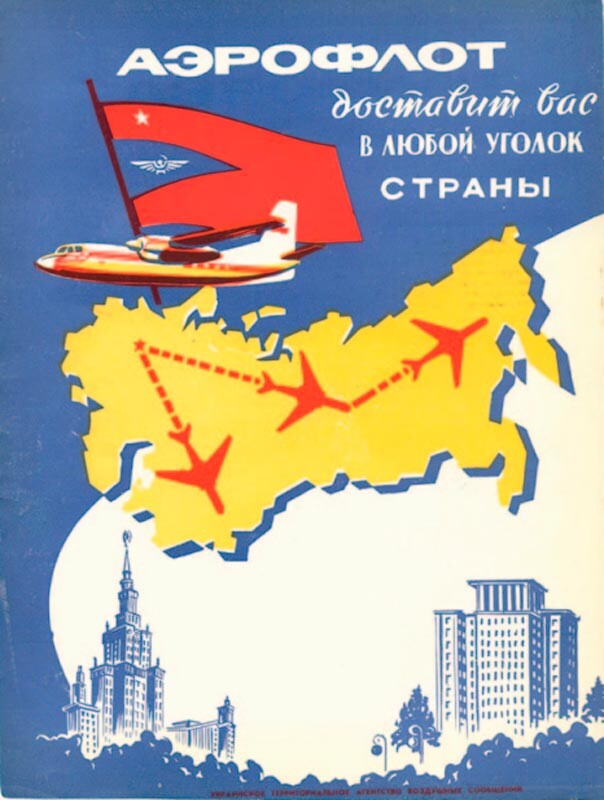 Aeroflot will take you to any corner of the country. Depicting the An-24 prototype, 1962