What a feast looked like in the Russian Empire (PHOTOS)

Russian Kitchen
Russia Beyond
Take a look at the traditional festive dinners, birthday parties, and holiday meals Russians would indulge in at the very beginning of the 20th century.

1. What Russian doesn't like a feast? It’s a simply nice tradition to invite people or visit them with a treat. Here's what the festive dinners in different regions of the Russian Empire looked like over 100 years ago. 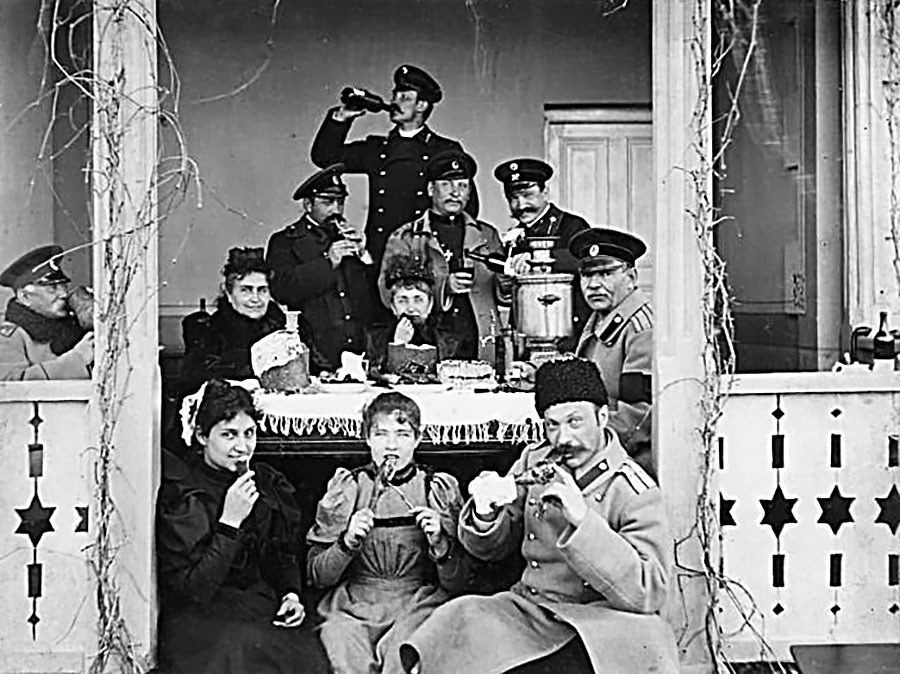 2. There were always lots of reasons for a big dinner, from family celebrations of birthdays or weddings, to religious holidays. 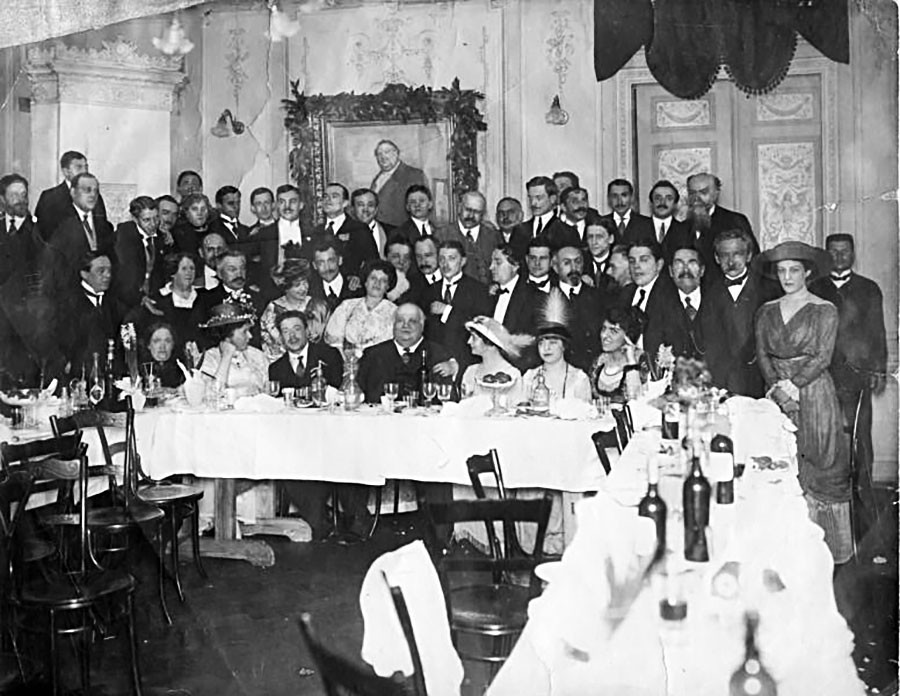 The jubilee of actor Konstantin Varlamov, St. Petersburg. Between 1910-1915.

3. Hosts always cooked the best dishes - and often some unusual recipes, that they could not afford in everyday life. 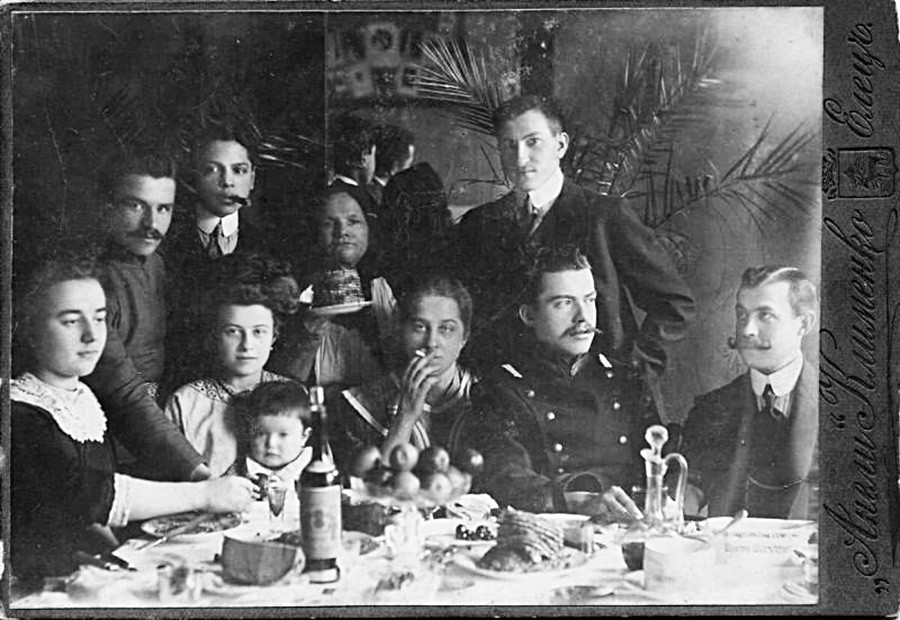 4. In the Russian Empire, the main holiday of the year was Christmas, not New Year, as today (here’s why). They decorated a Christmas tree, bought gifts for children and, of course, prepared a festive dinner - even the poorer people did. And the Christmas table was always full of gastronomic delights: caviar, pies, fish, salads, wines, etc. 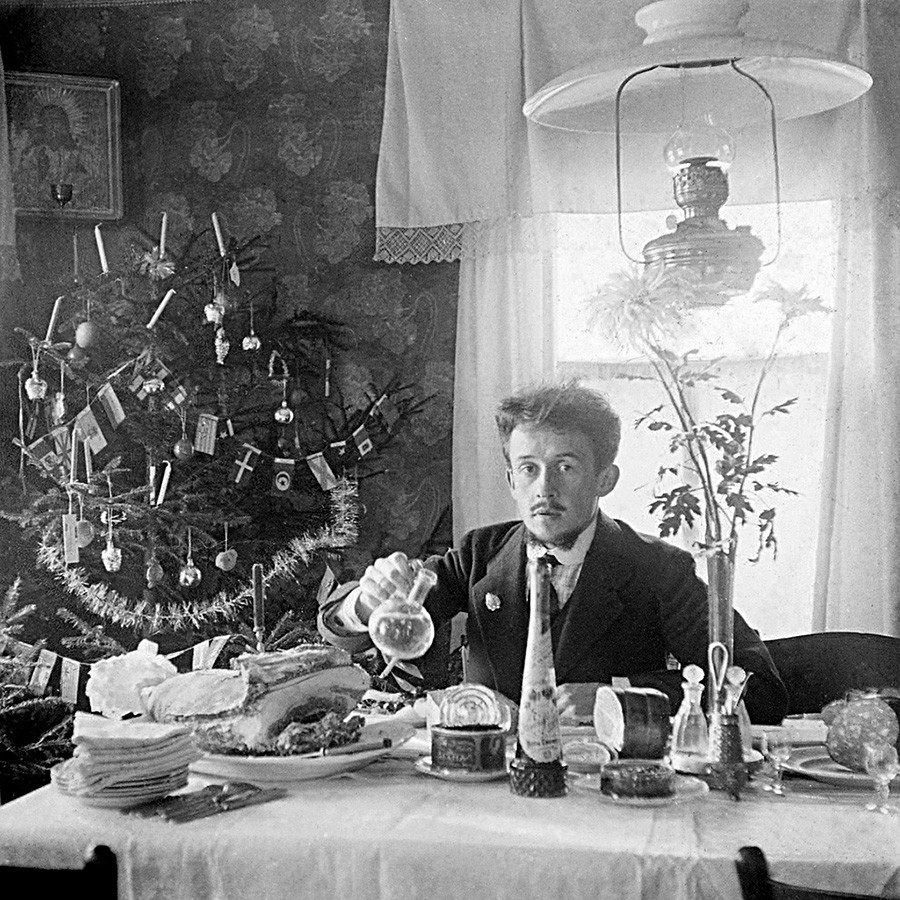 A self-portrait of an amateur photographer by the Christmas tree. Yaroslavl. 1910 – 1913.

5. For Easter, Russian families baked traditional kulichi cakes, consecrated in the Church the day before. Also on the table were eggs painted with onion skins, sweet cottage cheese mass with raisins called ‘Paskha’ in the form of a pyramid, and various pastries – depending on the family's wealth and the hostess' culinary skills. 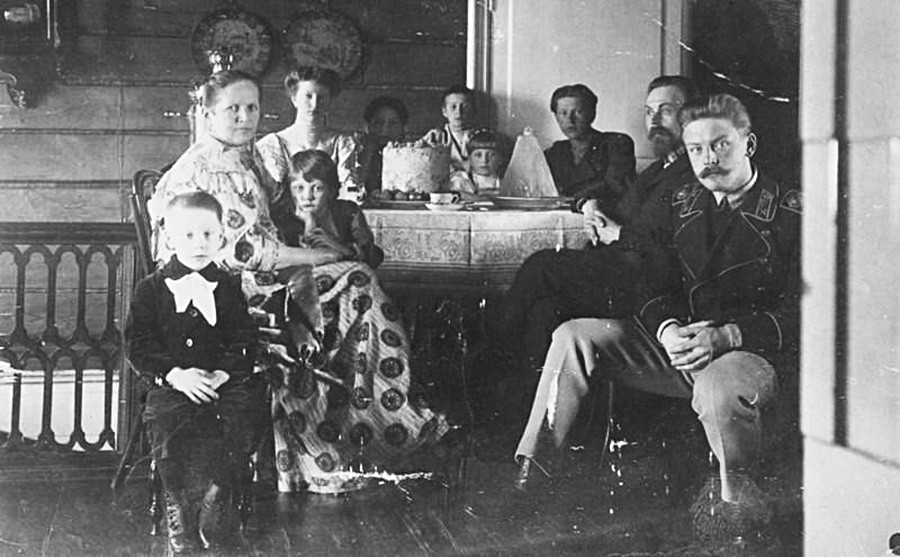 6. In summer, people regularly had dinners at the dacha (Eng. “country house”). The dining table was taken outside and covered with a light tablecloth. The center of the table traditionally belonged to a large samovar with tea. 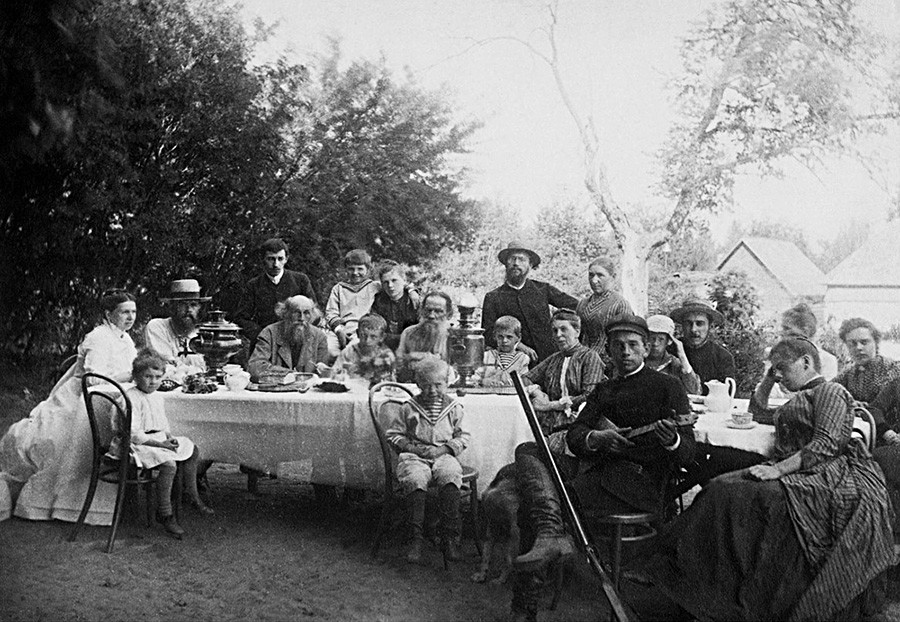 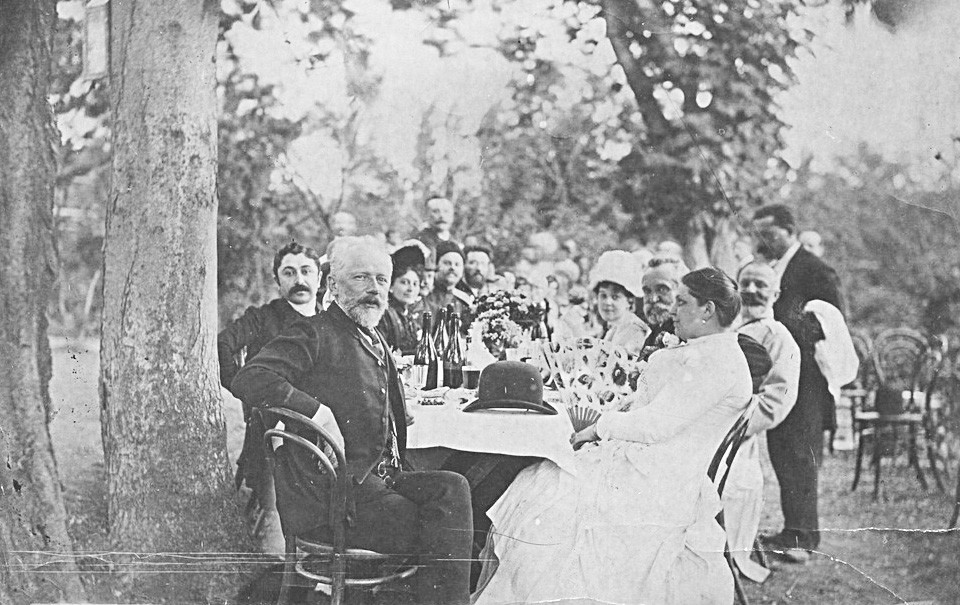 8. For richer families, all these feasts were just another one reason to show their wealth. They could get expensive food from Europe, and most often, had cooks arrange the table. 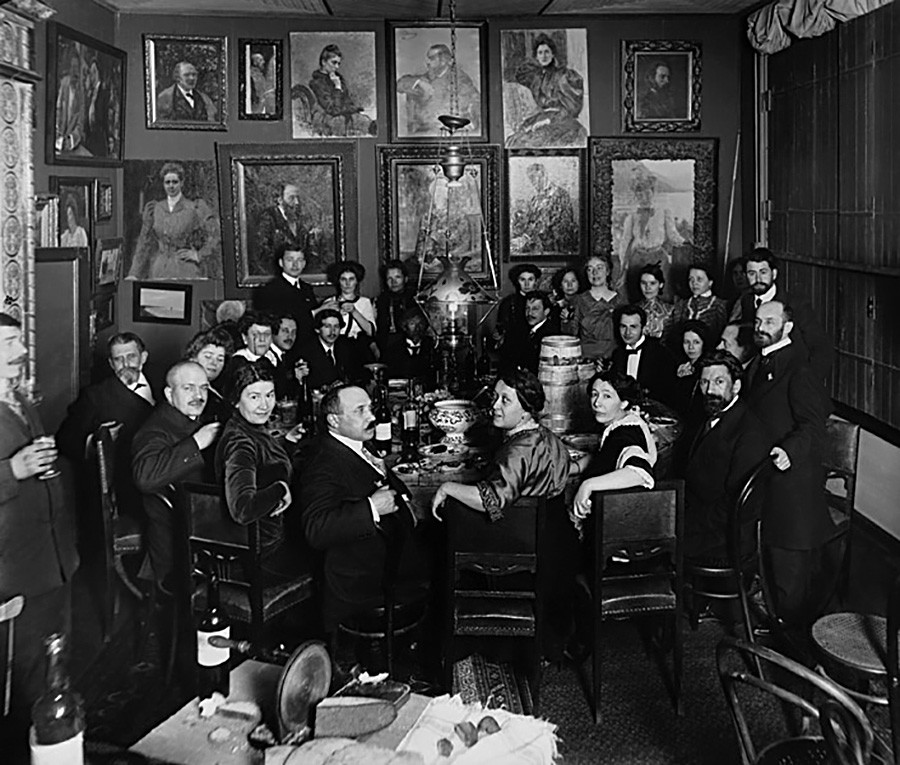 9. Gala dinners were also common in the restaurants of Russia’s capital. And the menus were always very elegant! Try, for example, the ‘Maly Yaroslavets’ restaurant on Bolshaya Morskaya street, that hosted famous writers (from Chekhov to Mamin-Sibiryak), and its served sterlet soup and a lamb with buckwheat! 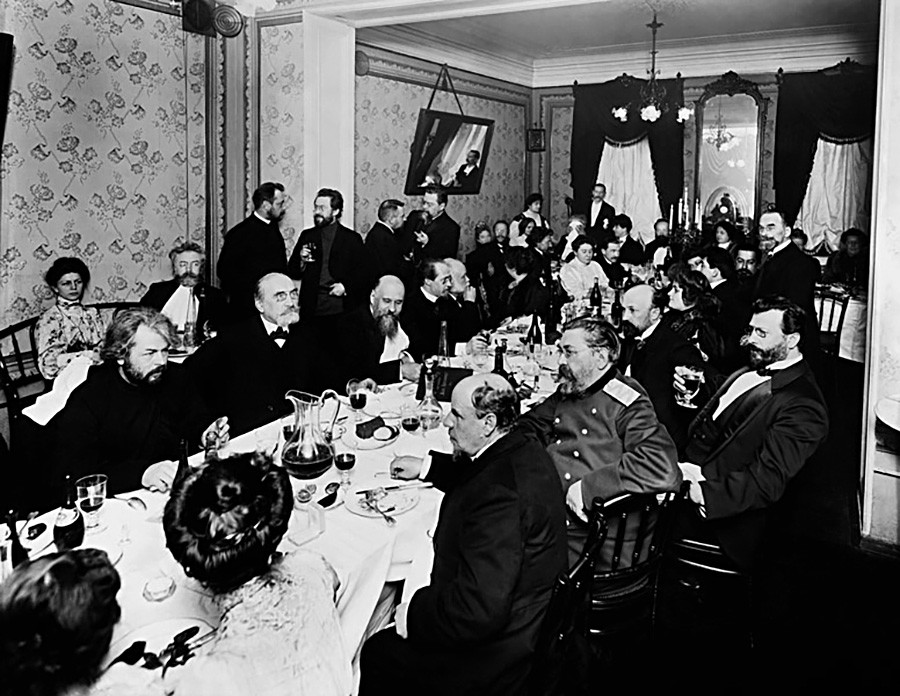 The dinner in honor of the 50th anniversary of the Literary Fund. Maly Yaroslavets restaurant, St.- Petersburg. November 8, 1909.

10. The youth, as today, preferred to hold dinners with music. Guests who played the guitar and piano became the stars of the evening. 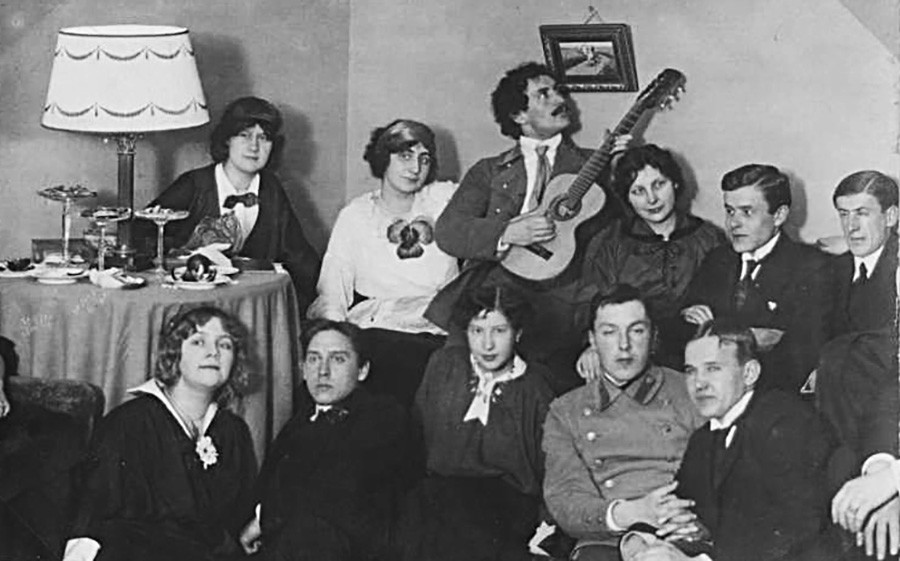