U.S. and Russia discover a new property of graphene 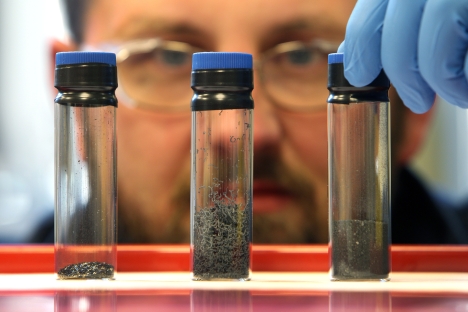 Scientists at Moscow State University have discovered a property of graphene that can be used for absorbing radiation and mining rare earth metals and shale hydrocarbons.

Scientists at Moscow State University, together with colleagues at Rice University, have discovered a new property of graphene.

Work carried out in laboratories at the two universities has revealed that graphene can extract radioactive materials from water solutions with great efficiency. This property can be harnessed to rid places of radiation contamination – places like Fukushima, for example – or to improve technology for extracting rare earth metals and shale hydrocarbons. The collaborative work was published in the Physical Chemistry Chemical Physics journal.

During experiments, researchers found that microscopic flakes of graphene oxide, with a thickness of just one layer of atoms, quickly connect with radionuclides of various origins and collect their separate ions in hard bodies. These flakes are easily dissolved in water, and once they have absorbed the radioactive substances, they gather in clusters which are easy to recover and even use – for example, they can be burned.

According to James Tour who leads the group from Rice University, this discovery could be a real boon when cleaning up radioactive contamination hotspots, like, for example, the area around the Fukushima No. 1 nuclear power plant.

Moreover, according to Tour, when applied, the discovery could significantly lower the cost of fracking (a process currently used for extracting shale oil and gas).

Graphene oxide is a wonderful substance that appeared soon after grapheme. It was immediately clear that it had a number of very different applications and uses, and graphene’s ability to remove radioactive toxins from water so effectively came as no real surprise.

However, according Stepan Kalmykov, leader of the dosimetry and environmental radioactivity lab at Moscow State University’s chemistry department, everyone involved in the experiment was bowled over by just how fast graphene was able to clean up radiation.

The atom-thick graphene oxide flakes were synthesized by Tour’s group, and they were then tested in experiments conducted in Kalmykov’s laboratory. The scientists tested the flakes in solutions containing uranium, plutonium, as well as sodium and calcium, which prevent absorption.

Even with controls designed to slow down the process, graphene oxide showed itself to be much more effective and efficient than other absorbents traditionally used for cleaning up radioactive materials – substances such as bentonite clays and granular activated carbon, for example. Radioactive impurities were precipitated in a matter of minutes.

According to Tour, the idea of using graphene oxide for cleaning radioactive impurities (as well as the idea of holding joint experiments to this end) first came about several years ago at a seminar, where his doctoral student, Alexander Slesarev, happened to meet Anna Romanchuk, a doctoral student from Kalmykov’s laboratory. With the exception of James Tour himself, the article is authored solely by Russian scientists.

One of the main directions of this joint effort was to find means of extracting radioactive actinide and lanthanide isotopes from solutions. These 30 elements on the periodic table form the so-called rare-earth element category. The presence of radioactive isotopes in their ores and solutions means extracting them can pose a serious health risk.

In the United States, for example, their extraction is practically banned, because it does not conform to environmental standards. This is despite the fact that rare-earth elements are in hot demand for the electronics industry and, in particular, for supplying the world with an ever-increasing number of mobile phones.

In China, these environmental standards are not so exacting; partially thanks to this, China has been able to corner the rare metals market. Using graphene to rid rare metals of radioactive toxins could very well weaken China’s hold on the market.

As for fracking, much also centers on naturally formed radionuclides, according to Tour. During this process, a pressurized mixture of water, sand and a number of chemical substances are pumped into a horizontal mine. The impact of this pressurized mixture makes cracks in the inner surface of the shale layer. When the liquid is sucked out of the mine, the oil and gas that have been freed from the rocks also start to trickle out.

This is a very expensive procedure that entails some serious environmental consequences: one such consequence has to do with the radionuclides that are brought up to the surface along with the water and chemical solution. Thus, graphene oxide can also come into its own here, helping to clean up radioactive contaminates released in the process of fracking.